this temporary cover project in the heart of paris follows the initiative of the city, which aims to promote the use and re-use of bio-sourced materials. the design team defined several principles for the realisation of this project in order to limit its carbon impact. firstly, the load carrying part of the structure, with a max span of 15m, is constructed in laminated timber. similarly, the structure of the façade, acting as protection railing, is made up of a wooden frame in the form of vertical units of brackets, in timber as well. this structure was deliberately designed using the principles of a very low-carbon construction, encouraging the use of short supply chains. 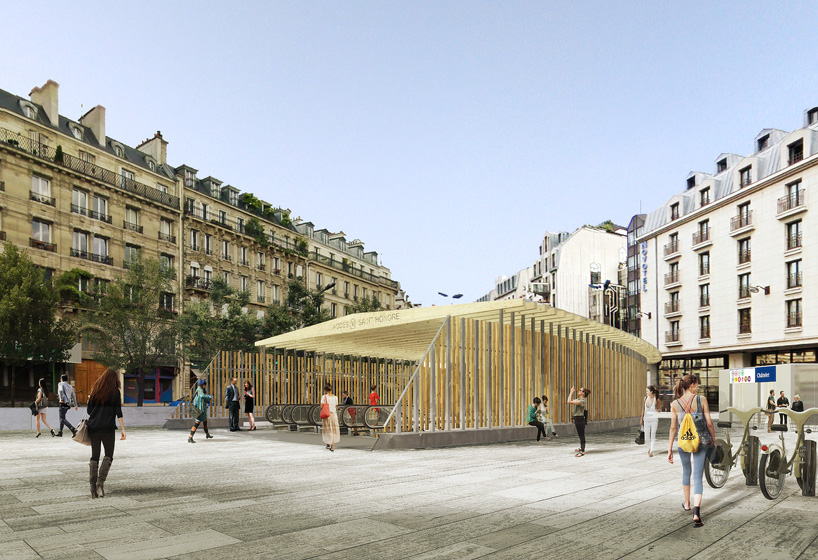 choosing a minimalist approach, french based 169 architecture hopes to fulfil several objectives. firstly, it aims to promote natural ventilation of the underground space and limit the effects of air drafts, a common problem in underground exits. thanks to its slatted façade natural ventilation is encouraged. similarly, the cover is well-ventilated during the summer months and prevents heat pockets from developing. light was also used to increase comfort within the space. the glazed cover acts as a light-well for the underground areas and also directs users towards the exits. concerning the comfort of pedestrians, the glass cover creates a link between the underground spaces, mainly lit by artificial lighting, with the natural light of the urban space. in addition, the wooden beams act as light reflectors and permit the soft diffusion of natural light. overall, the transition between the two contrasting light environments is comfortable. 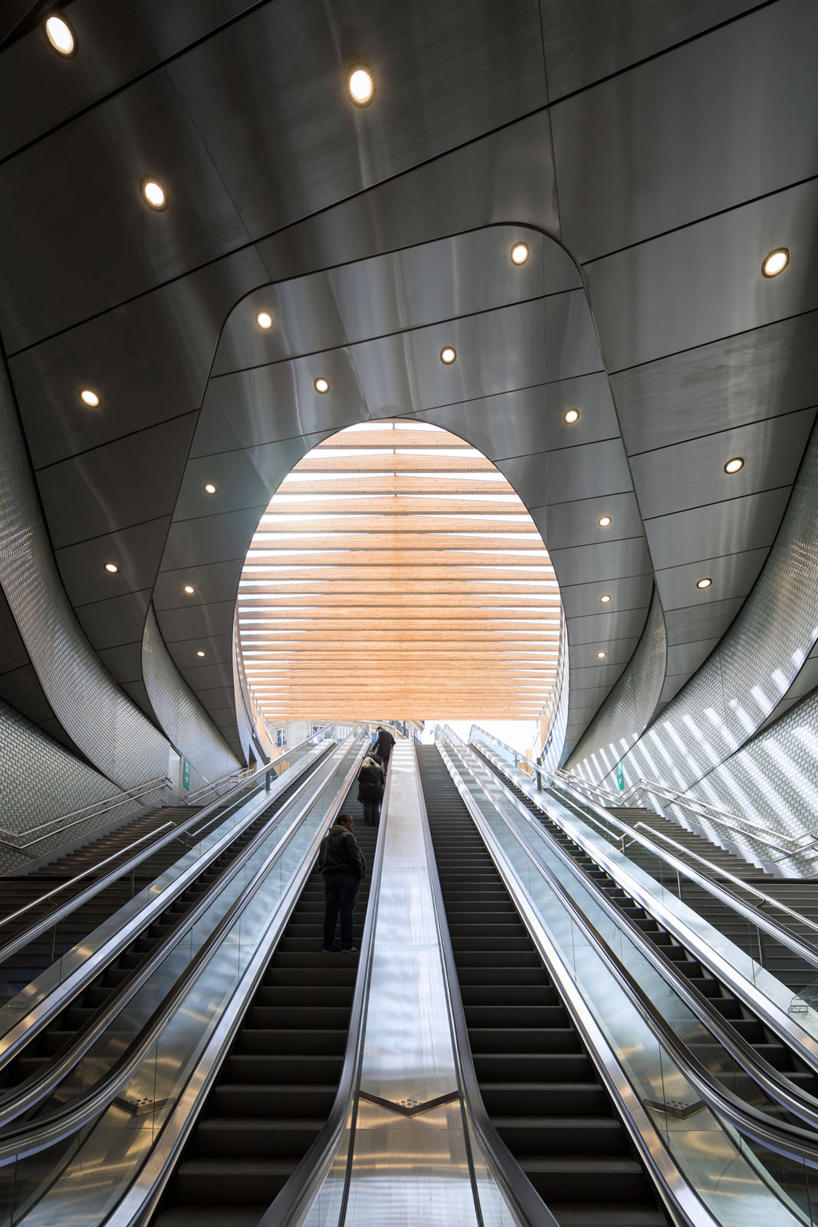 the architecture for this project is appropriate for both the users and the local residents. the back of the entrance creates an urban façade at the same scale for passers-by and for the road itself. the slatted wooden brackets offer a visual transparency between the two ends of the road of halle. the coloring of the wood adapts itself well to the colors of the bordering building’s stone façade. 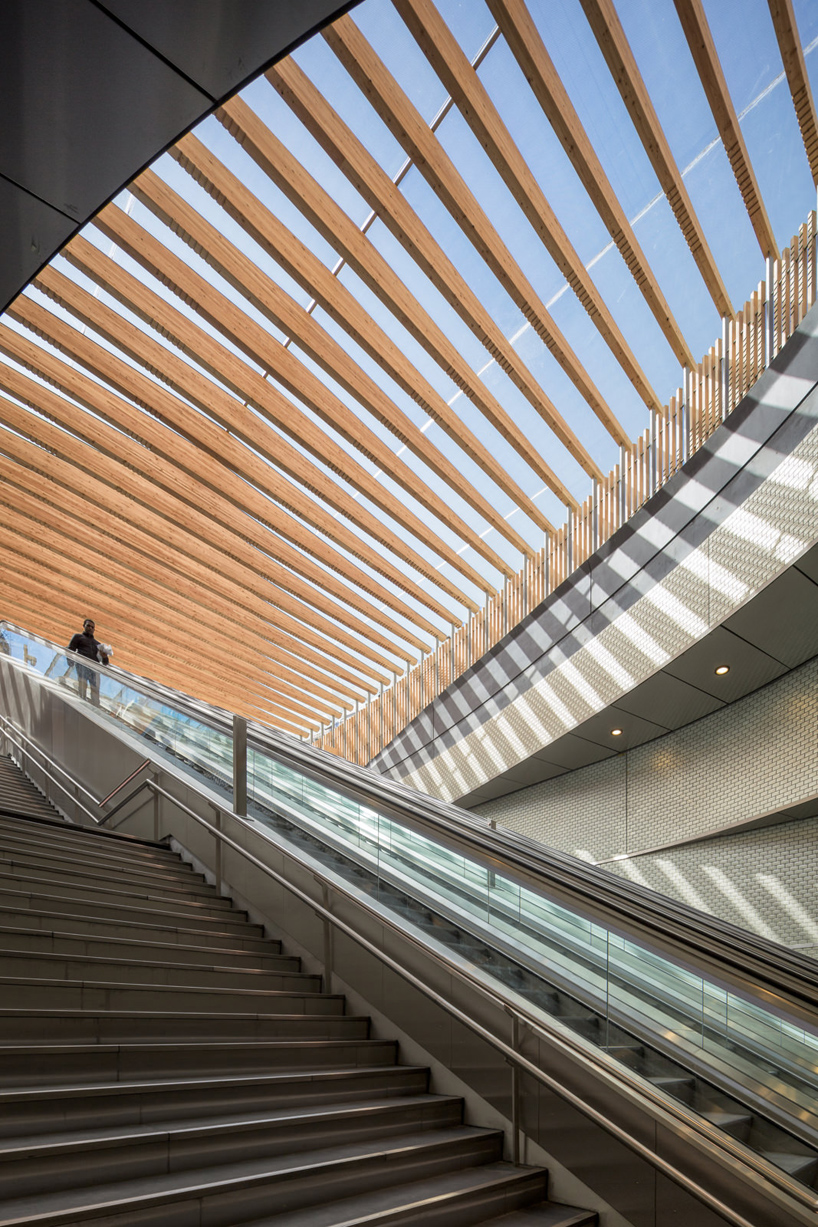 the envisioned project is a cover that is both simple and understated. its architectural quality rests on the care and the delicacy taken in the design of the details. the project is designed with great focus on offering a simple solution for the construction of the frame. the static system of the structure is based on the principle of self-supporting frames, allowing a rapid assembly of the structure. the work is also planned to allow a large amount of pre-assembly in workshops to guarantee speed and precision during construction. for example, the assembly of the timber beams on-site took only two days. the initial aim was a temporary structure to cover the entrance opening and open it without risk of flooding. all this while keeping open the possibility of installing, in the future, the covering structure that was initially planned. through the simple construction, an assembly that follows the choice of materials, the high load-carrying capacity of the primary structure, the cover in laminated glass with a simple geometry and a similarly simple assembly ensures that the re-use of this structure is possible. 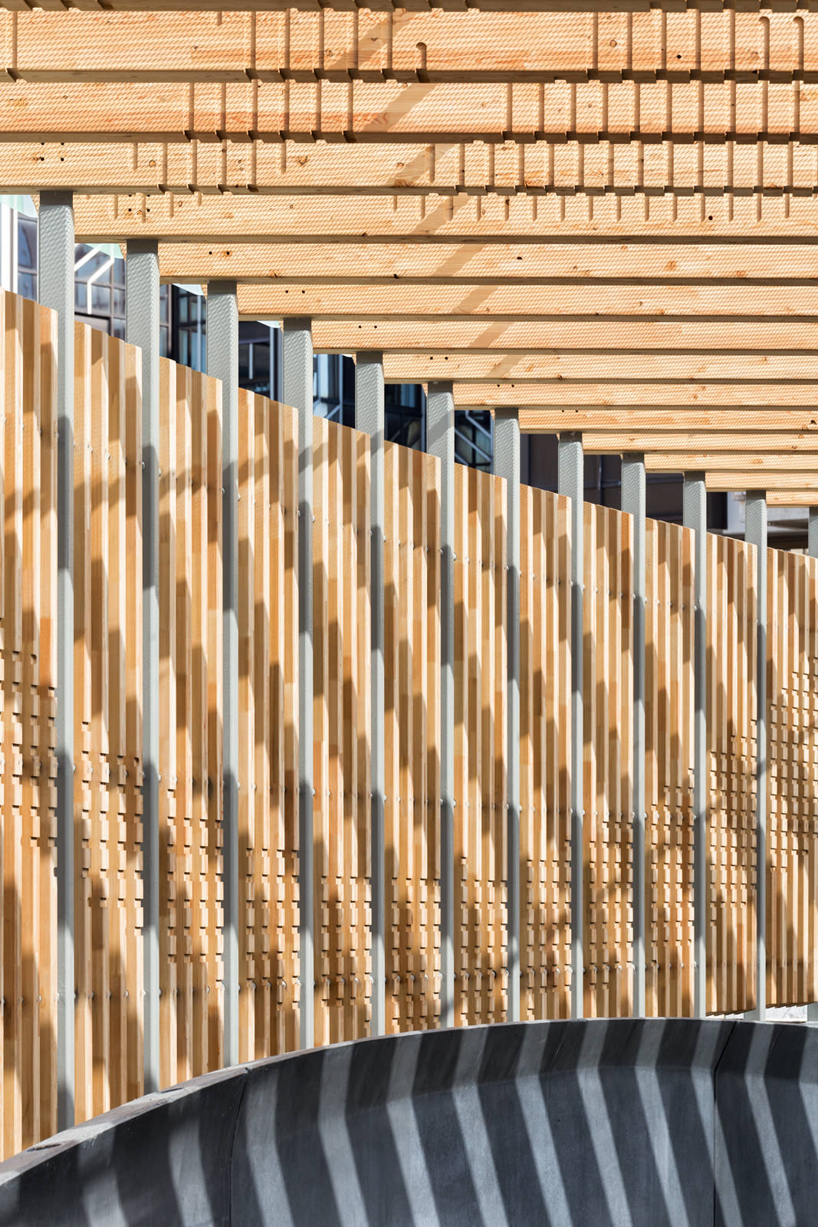 wooden frame in the form of vertical units of brackets

the storage of carbon by the means of wood is undoubtedly one of the most effective methods for retaining carbon, at this time. photosynthesis allows trees to capture atmospheric carbon during growth and store it in their biomass throughout the lifetime of use of the wood. It is important to note that the use of wood products also avoids having to rely on other energy-consuming materials and avoids CO2 emissions. 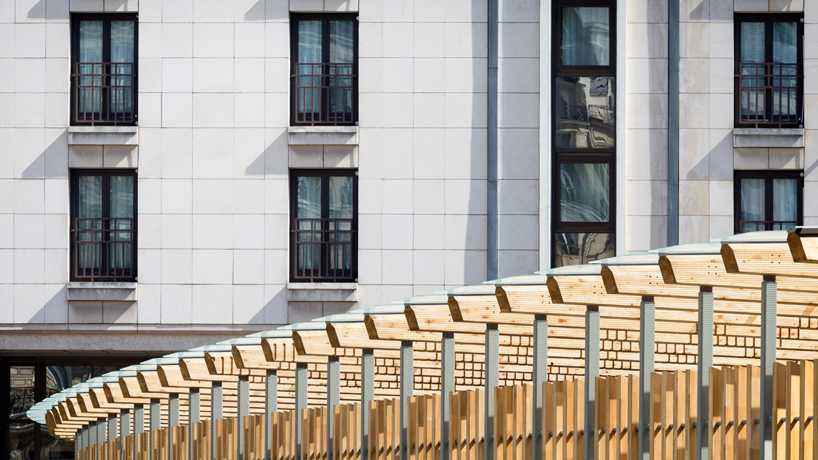 plan of the initial design
all plans © 169-architecture 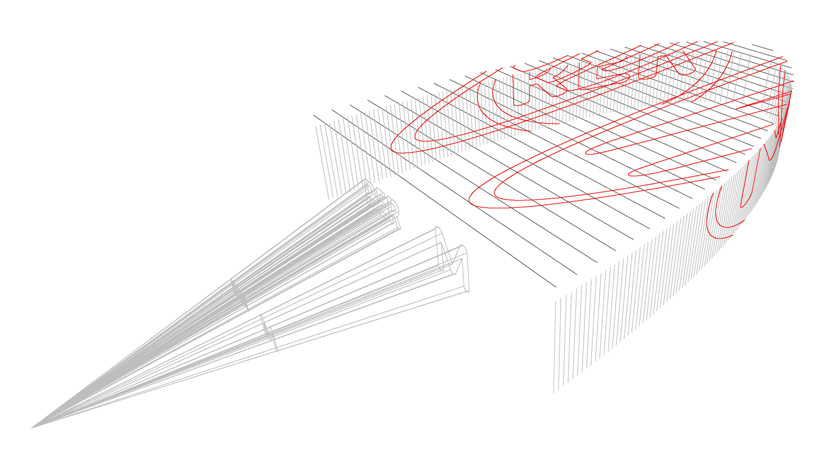 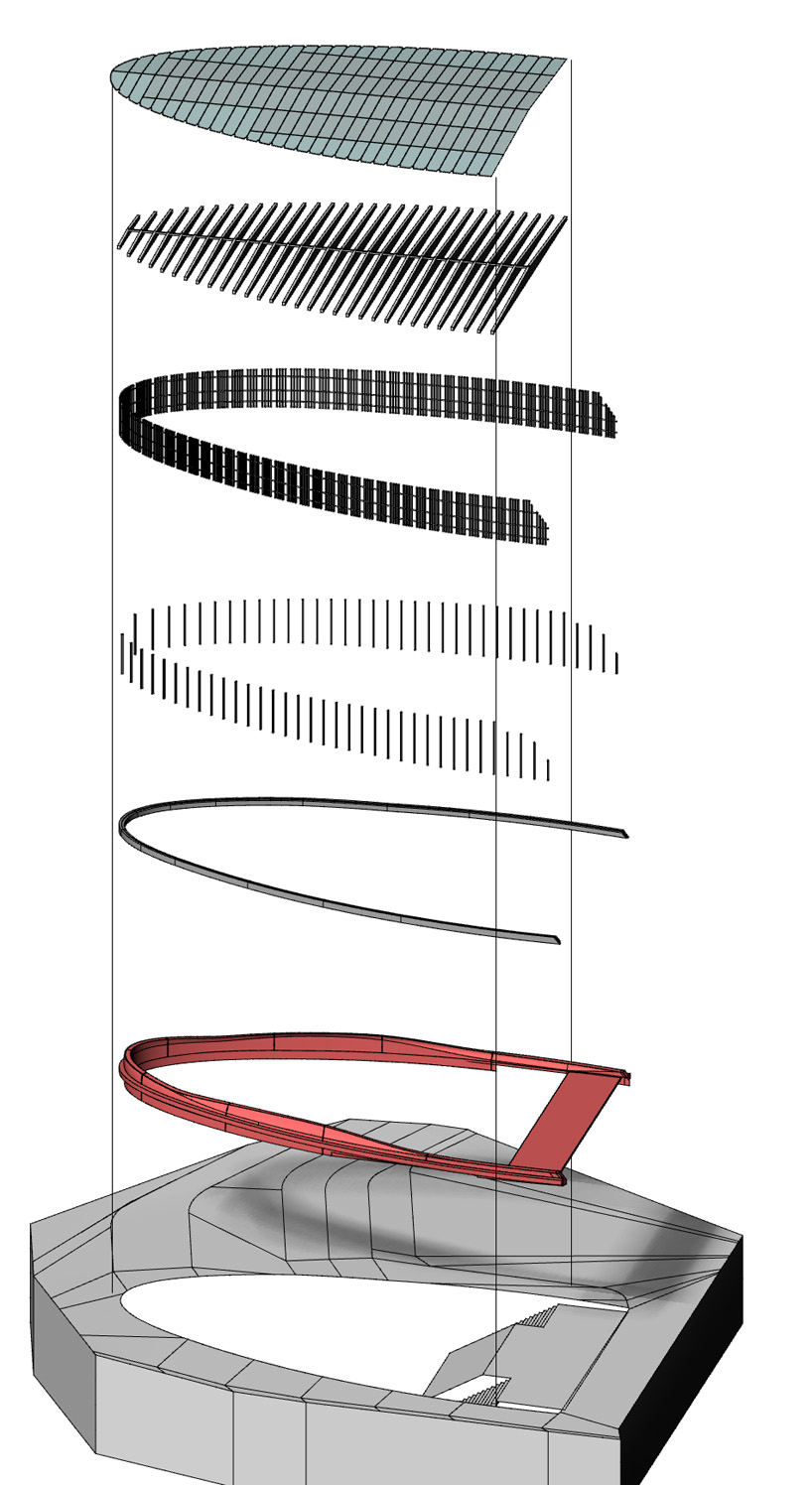