over a decade ago, an ambitious project was undertaken by developer garrett kelleher to construct a 2,000 foot twisting tower designed by calatrava near the south bank of the chicago river. as fate would have it, ‘the spire’ came along with budgetary issues and left the developer in over 100 million dollars in debt, forcing him to cede the property to local developers related midwest.  so here they are, faced with a 76-foot deep circular foundation in the ground that was to support several thousand feet of unrealized potential- so what’s the solution? the developers picked 5 local architecture firms (SPACE architects + planners, VOA, solomon cordwell buenz, urbanlab, and CLUAA) and one landscape firm (hoerr schaudt)  and posed the question: what would you put in a 76-foot deep hole?

each studio came up with diverse and creative solutions to make a failed dream into a productive architectural site for the community. 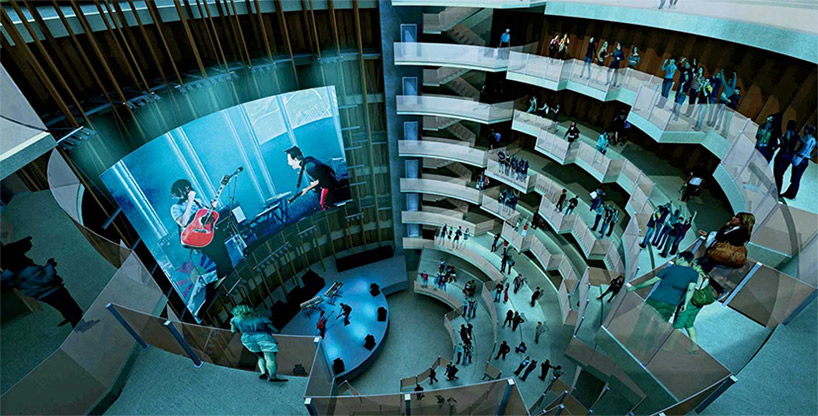 the proposal takes the opposite stance to the original design- to utilize all the existing infrastructure below the ground instead of building above it. their design envisions a large vertical open-air venue set below grade so that the sound is concentrated within the void. a retractable canvas roof at the top provides shade and cover from weather, while a trellised wind turban system reaching the tallest points of the structure produces enough energy to power the entire system. 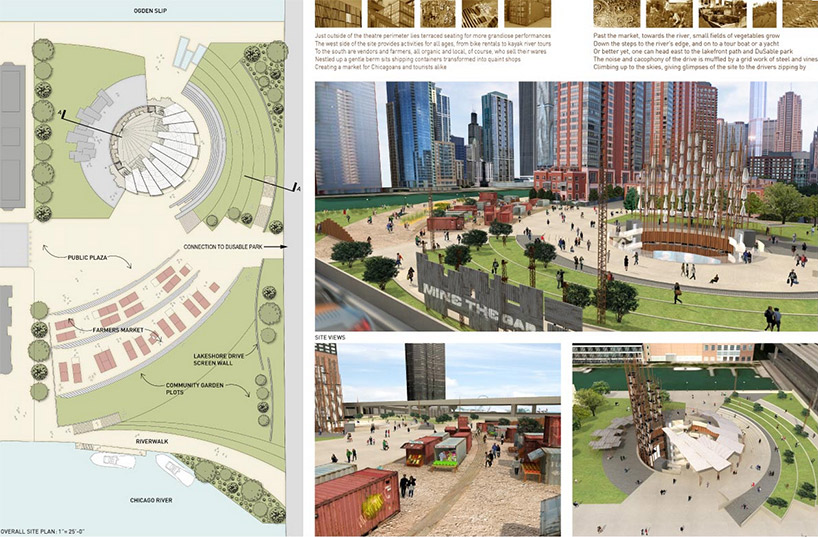 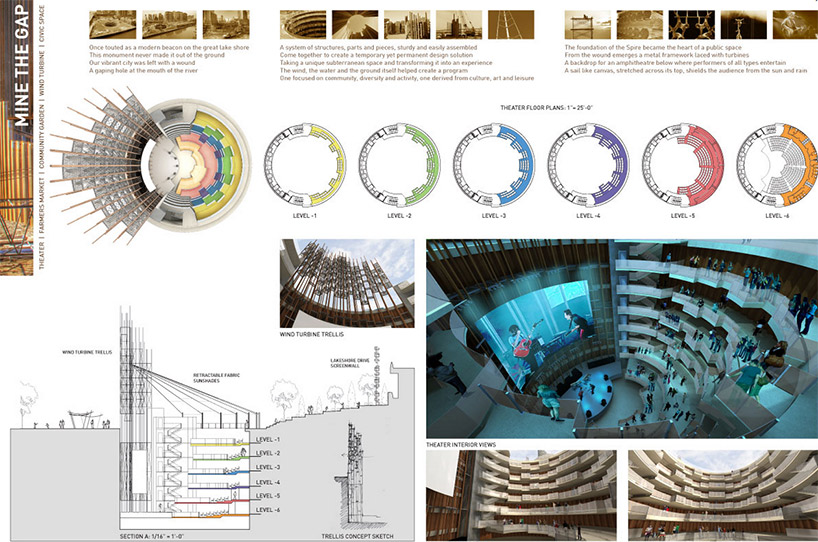 as the only landscape firm participating in the design charrette it is no surprise that the designers took to the more environmental and climatic aspects of the site, which just happens to be a key point along a flight path frequented by some five million birds annually. the structure is conceived as a ten-story light-weight steel and wood trellis vortex emerging from a now inundated concrete pit surrounded by a veritable garden of native vegetation providing much needed sustenance to the transient avian species that will visit the site. an elevated walkway across the site will allow visitors to pass through this wild habitat without directly disrupting it, turning the concrete footprint into a lush garden within the ‘city in a garden.’ as designer peter schaudt explains in chicago mag, ‘it’s an oasis in the middle of the city, not only for people but for birds.’ 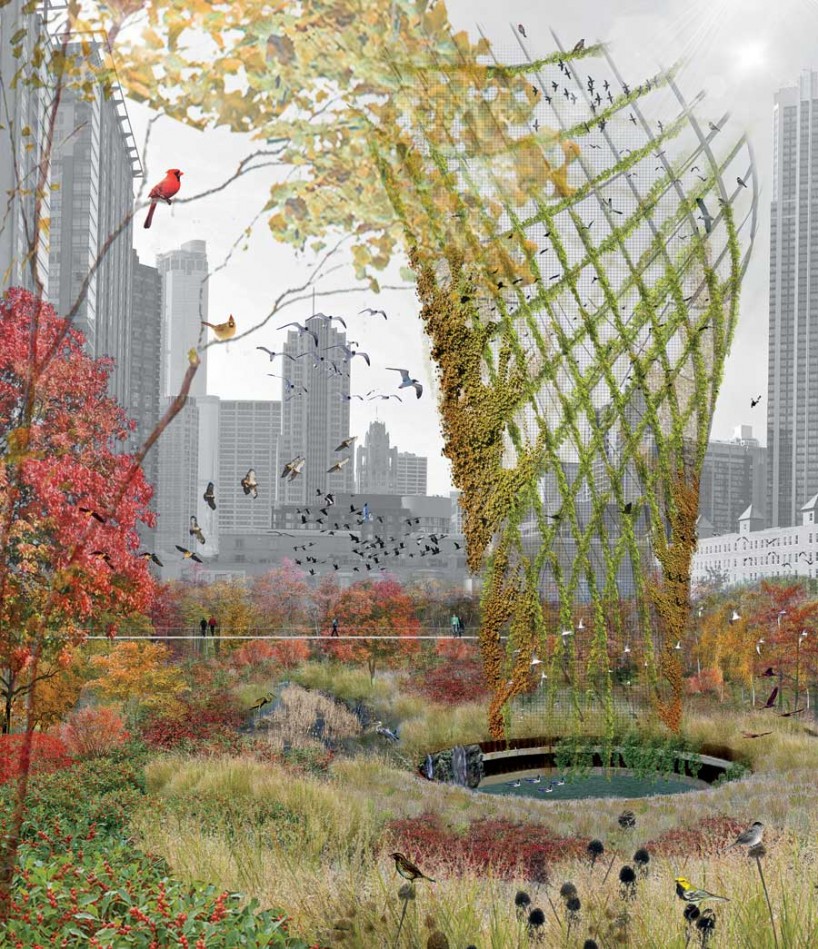 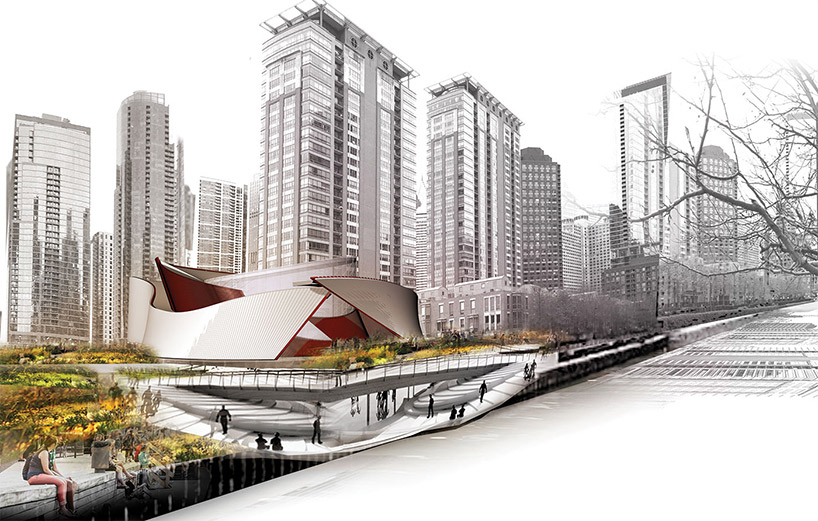 being located in a currently underwhelming area of the city on the fringe of the vibrant downtown area, the architects decided to activate the space by connected it to the existing infrastructure of the downtown area and brand the site as an extension of public space from which you can get a new vantage point of the lakefront skyline. as architect michael day explains, the project consists of ‘a pedestrian/bike bridge connecting to existing paths, a public market tucked under lake shore drive, an arts center and an observation structure atop hydroelectric power and water filtration systems in the spire’s void.’ a curving bridge connects the various modes of transport, both public and private, fast and slow, to the existing veins of chicago’s transportation systems, touching down at various points along the site to allow visitors to easily access the various functions with ease. the existing void in the ground is topped with a mobius-like sculptural structure that beckons visitors to wander around it taking full advantage of the site. the empty foundation in the ground will serve as a water filtration and education structure whose usability extends well into the future. the rest of the property on grade, currently a vast slab of concrete, will house a rich marketplace like a local bazaar filled with people and culture. 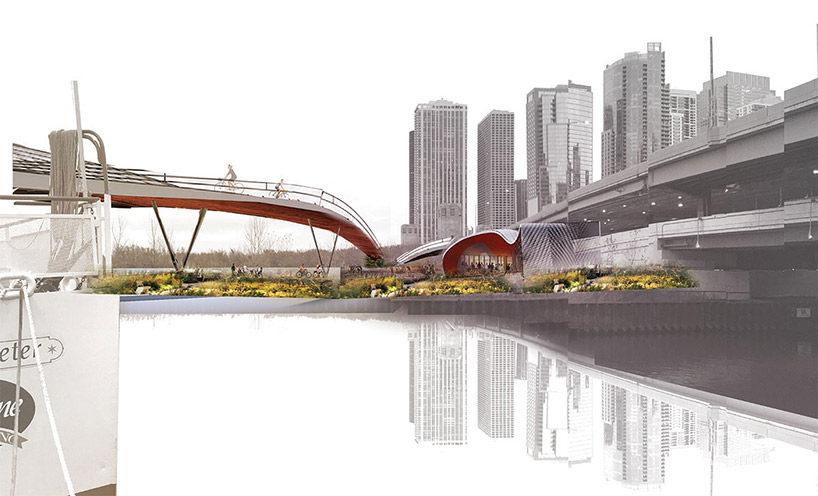 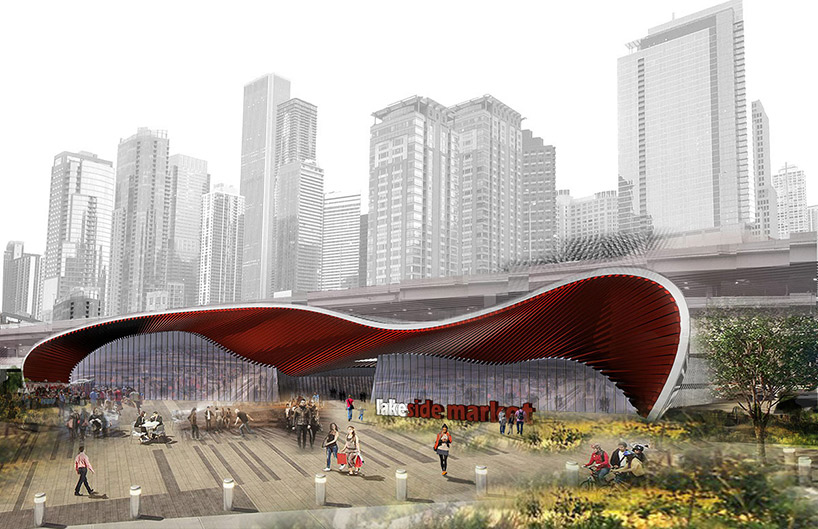 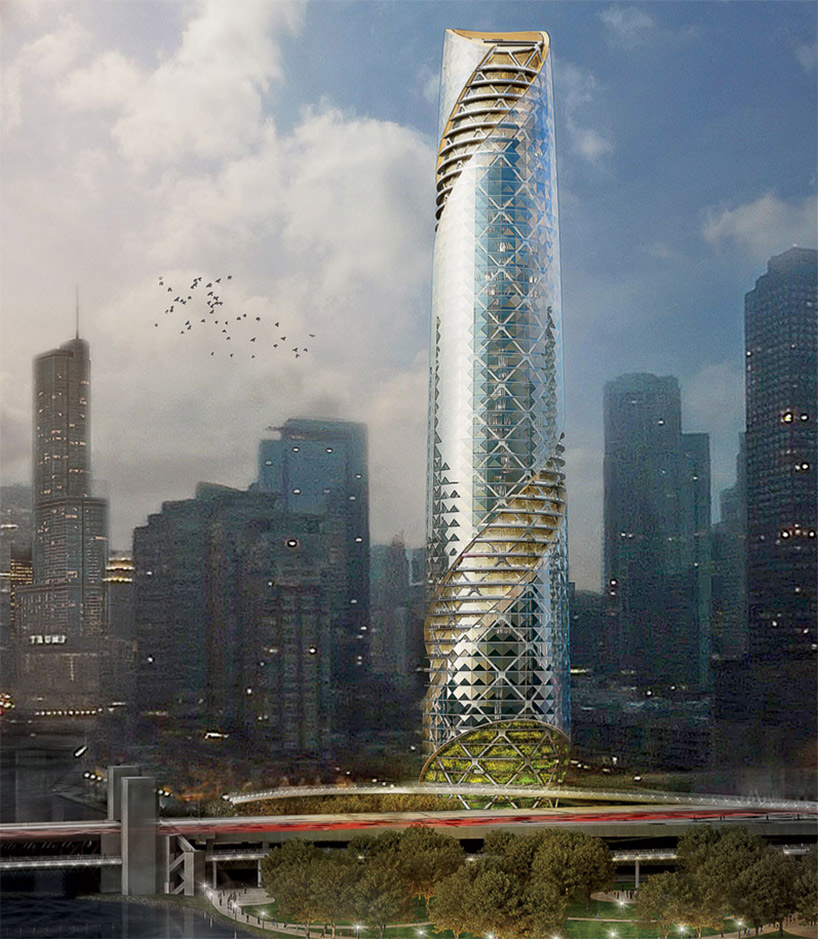 the only project that will actually use the existing foundation to build upwards is the ‘chicago beacon’ by solomon cordwell buenz. the condominium tower is based around a spiraling triangular glass facade that forms a structure unlike any in the area. at the base, several levels of vertical gardens seep onto the surrounding site, forming a 1,280 ft residential tower in the middle of a garden. the greenery in the tower is not just for an integration of vegetation within the man-made environment, but is actually designed for residents to grow fruits and vegetables. the reflective nature of the facade and angled rooftop acts as a large mirror that creates a landmark for boats and pedestrians alike.

what better way to utilize a water-side 76 foot pit than to turn it into an immense swimming pool? the structure itself continually siphons and filters water from the lake, cleaning it and returning it to the environment. meanwhile, an immense wading pool suddenly drops to waist level before emerging into the heart of the existing void, creating an almost hot spring-like oasis in chicago. 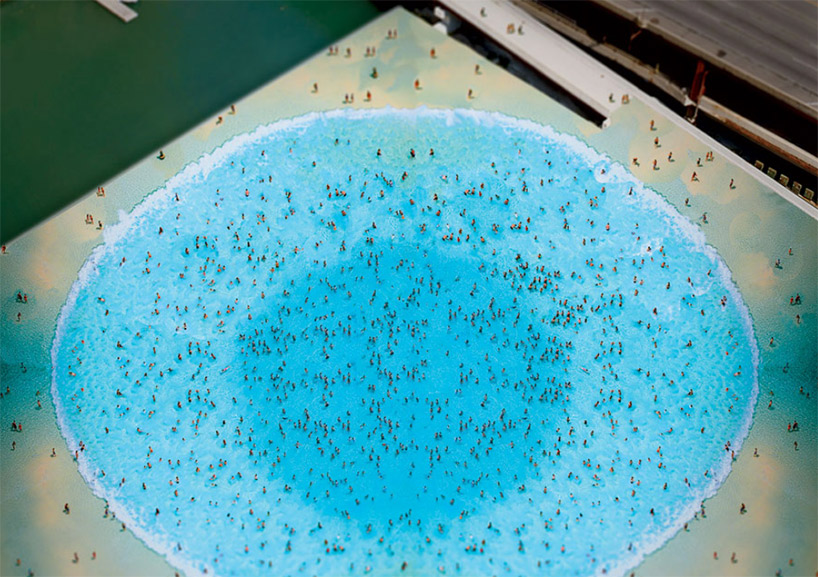 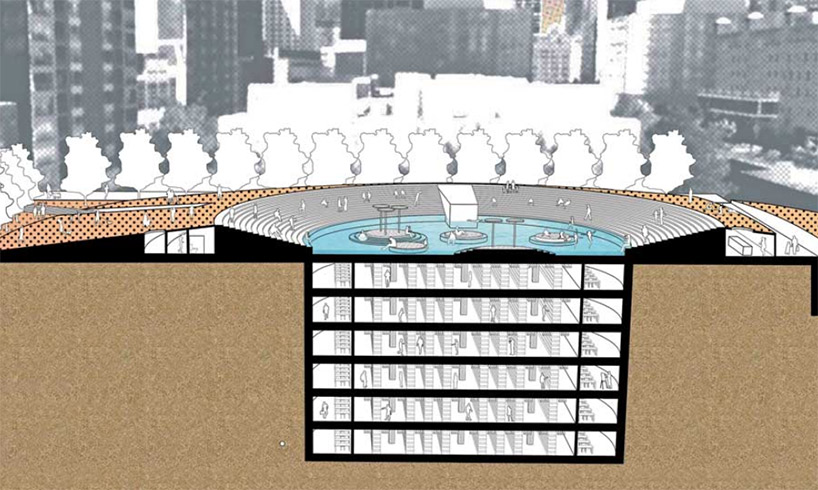 the final proposal cleverly utilizes the structure and the surrounding water to power several functions at once without using too much energy. why not use the large void to house a sizeable data center? centrally located but hidden from above grade, the existing foundation structure can house plenty of storage units and can easily span fiber optic cables to other great lake cities. the surrounding water naturally cools the technology without the use of excess energy to regulate temperatures artificially. once the water is heated from the servers, it is circulated to the surface where visitors can enjoy a hot tub heated by the machines below them. one system powers another, and is recycled all over again without pollution- the hot tub is really the byproduct of server cooling.