the project, entitled ‘the ephemeral machine’ by architecture of the morning after was chosen as a finalist of the land art generator 2014 competition held in copenhagen, denmark. the theme of the pursuit was an urban scale installation capable of combining esthetic and functional issues with the production of clean energy.

view from the little mermaid site

the work combines an image of the historic steam engines produced by burmeister & wain (characterized by massive volumes and pistons) with the contemporary vertical elements of the site (chimneys, cranes, silos, and antennas), resulting in an evocative energy installation and landscape artwork. the movement and energy produced are the substantial elements, while the form and the materials are nothing more than temporary conditions.

view from the sea

this 120-meter high installation occupies the sea portion in front of the former shipyard and is composed of more than 550 vertical components. each one is divided into an underwater structure affixed to the sea floor, a floating buoy-like raft, and a transparent helium balloon connected by a steel wire. the entire system is easily set in motion by the waves and the action of the wind on the balloons. platforms on the surface of the water are accessible to visitors, the actions of which contribute another element of motion and energy production.

the machine utilizes existing technologies: buoy-type wave converters and semitransparent photovoltaic film. the inflated blimps and the submerged surfaces are conceived to counterbalance each other in order to generate soft and gentle effects within the water. from a landscape point of view, the artwork creates a dense volume—suggesting the shape of engines, but also the voluminous encumbrance of present-day cargos and sea liners. however, the form dematerializes due to the lightness and transparency of the balloons, which are the only visible elements from urban-scale distances. 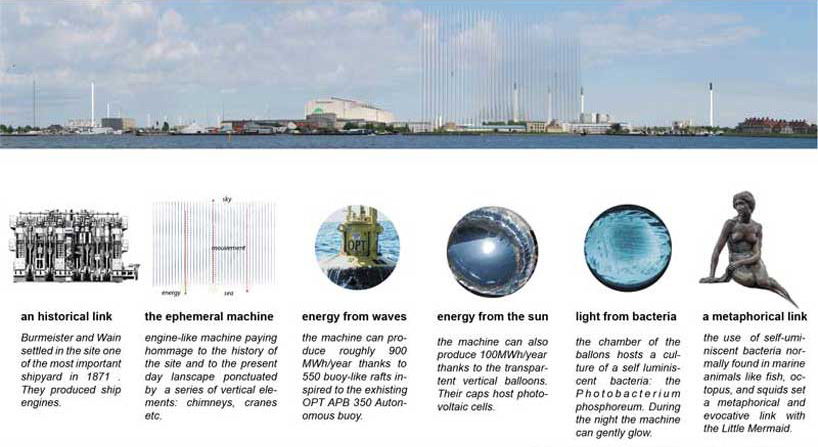 the project in six points