ABOUT, an architecture firm led by tadahiro butsugan, has renovated a building that forms part of a shrine in the northernmost part of kyushu, japan. founded in approximately 200 AD, the mekari shrine, one of around 80,000 shrines in the country, has watched over the adjacent kanmon straits for 1,800 years. all shrines contain an office that serves as a special place where gifts and amulets are exchanged. the architects responded to the brief by considering how to return the site to its ancient roots by uncovering the true essence of a shrine’s award office. 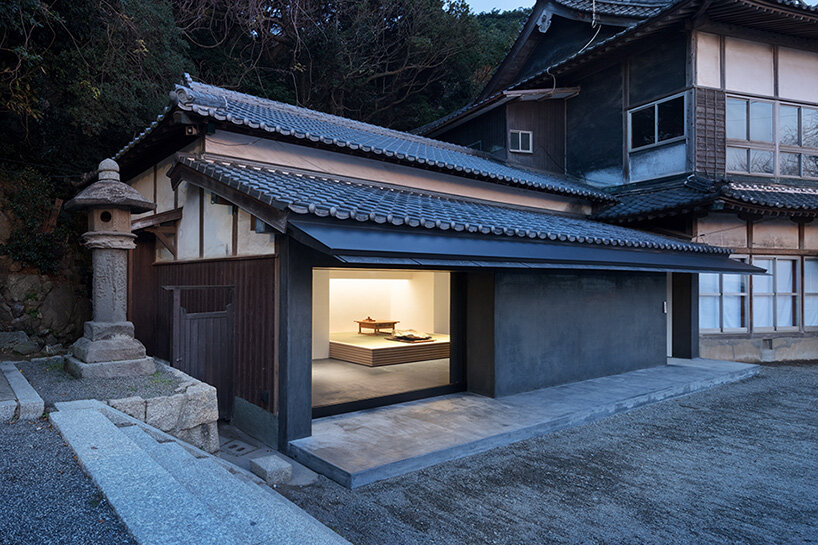 ABOUT notes that in recent years, japan’s larger, well-known shrines attract more and more visitors each year at the expense of the smaller, lesser-known shrines. ‘as the larger shrines become bigger and more powerful, entire ecosystems develop around them as cafes, shops selling sweets and souvenirs, luxury hotels and more begin to capitalize on the opportunities presented by the large number of visitors,’ explains tadahiro butsugan. ‘on the other hand, the smaller temples and shrines begin to rely heavily on the regular annual events such as new year’s or seasonal harvest festivals. they are left with little choice to compete as best they can and use these times to make enough money to fund their activities over the whole year.’ 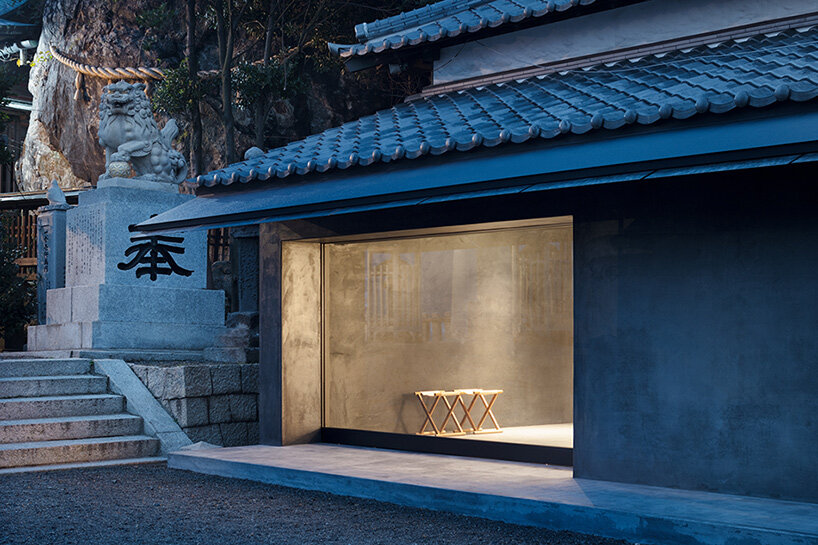 consequently, the priest at mekari shrine was aware that the future survival of the site depended on him, concluding that the shrine had to return to its roots in order to prosper. ‘when considering the renovation of the award office, rather than exchanging gifts under an ordinary roof, such as one you would find in any building in japan, we felt that we had to change the physical space in order to create a spiritual space worthy of the auspicious act of gift-giving,’ says the architect. 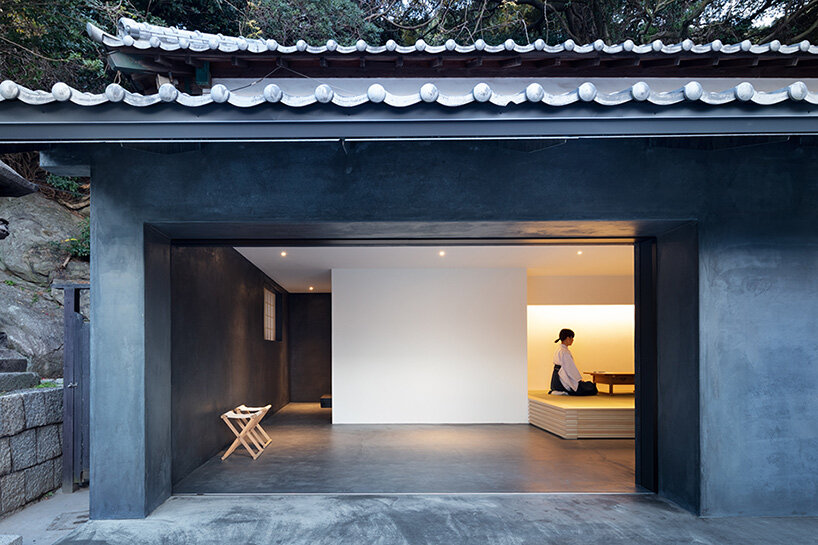 internally, the space has been designed to provide a calming atmosphere. ‘the gifts are selected and then placed upon the ​iwakura​ (the sacred stone altar) where the priest rings a bell and then deliberately and carefully performs the sacred rites to strip the object back to its soul, thus revealing its original form,’ tadahiro butsugan continues. ‘we aimed to create a space where one can feel the spirituality of the shrine by eliminating the act of explanation as much as possible. when something is reduced to its original form, no explanation is required.’ 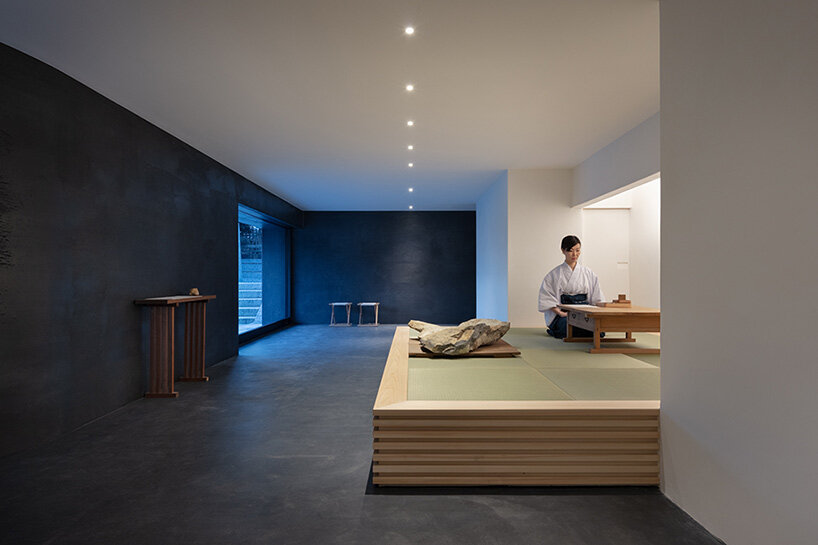 the materials, finishes, and techniques used in the building were drawn from traditional methods of construction. looking towards the future, a specific focus was placed on allowing the younger generation of craftspeople to continue these traditions. structural, or external parts of the building are finished in black plaster, while internal surfaces are finished in white plaster. ‘not only is this a pragmatic decision due to the environmental factors (being able to withstand wind and salt damage due to its location on the kanmon straits) but also due to the fact that the moon goddess (shadow side) is enshrined here,’ explains the architect. ‘the design of the building is crucial in conveying this spirituality.’ 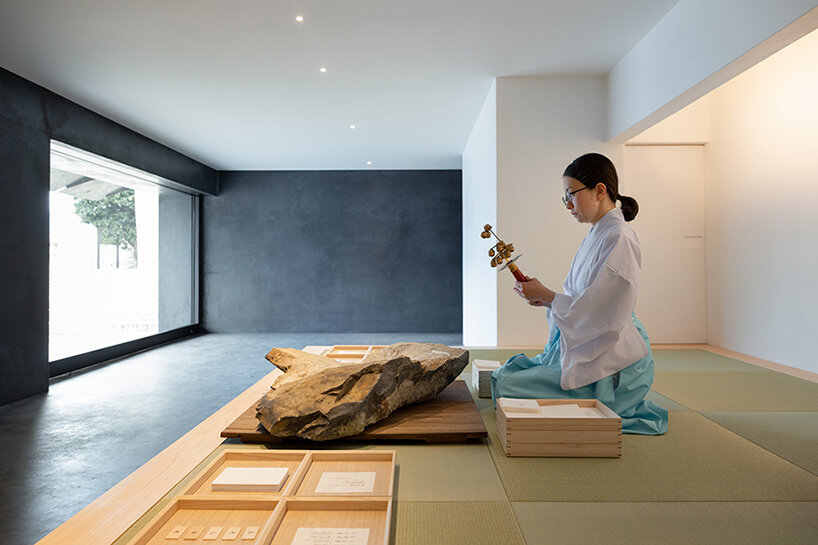 the façade’s large glass doors can slide away to be stored inside the wall. this is particularity useful at times when many people visit the shrine, with the building becoming a space that seamlessly connects to the outside. the design team adds that in the event of a natural disaster, the shrine also functions as an evacuation point and shelter. ‘we believe that in using modern structural solutions and techniques, mapped against the historical records, that we’ve managed to pare the shrine back to its original form, to show it as it should be shown,’ tadahiro butsugan concludes. ‘throughout its history, mekari shrine has stood watch over the kanmon straights, and will continue to light our path and guide us on our way.’ 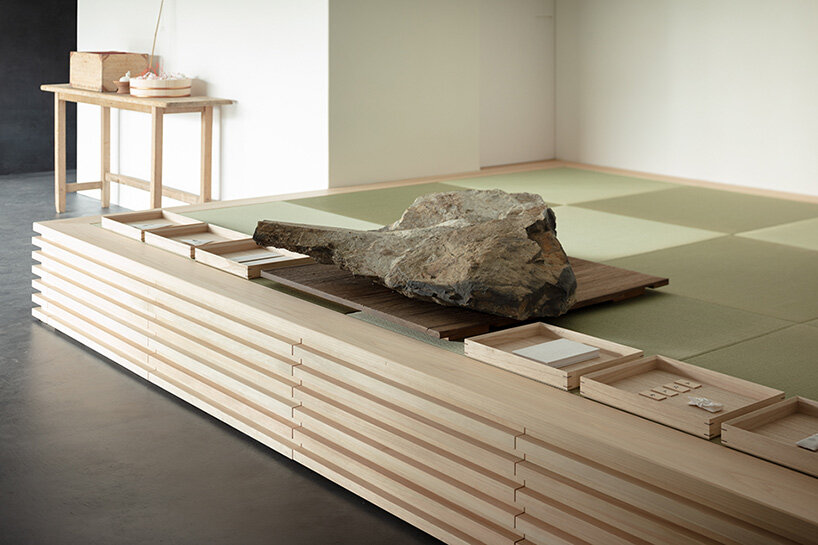 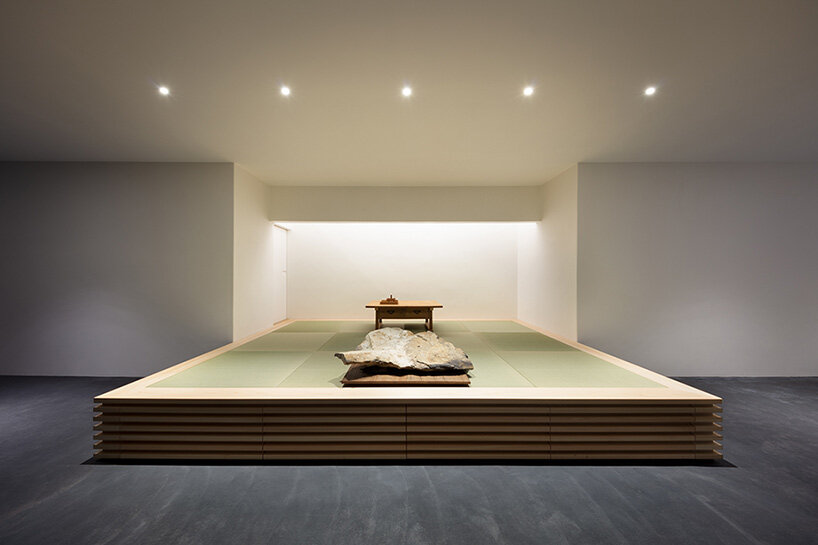 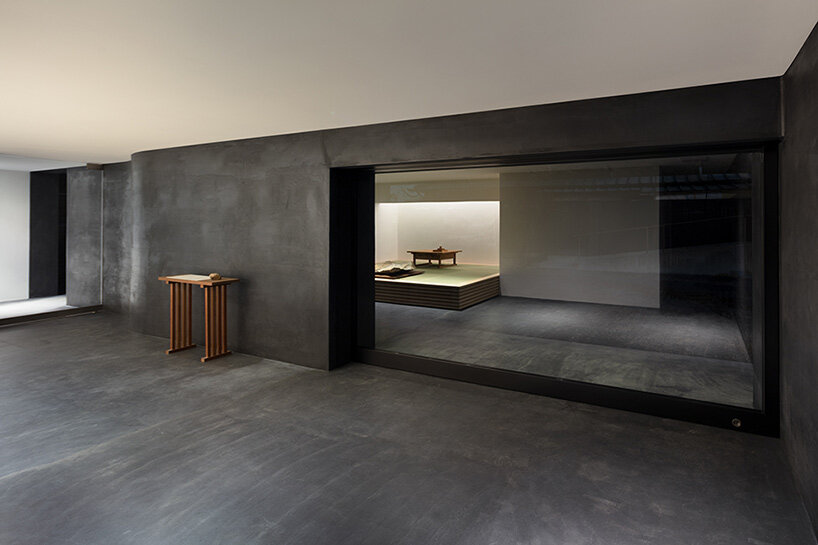 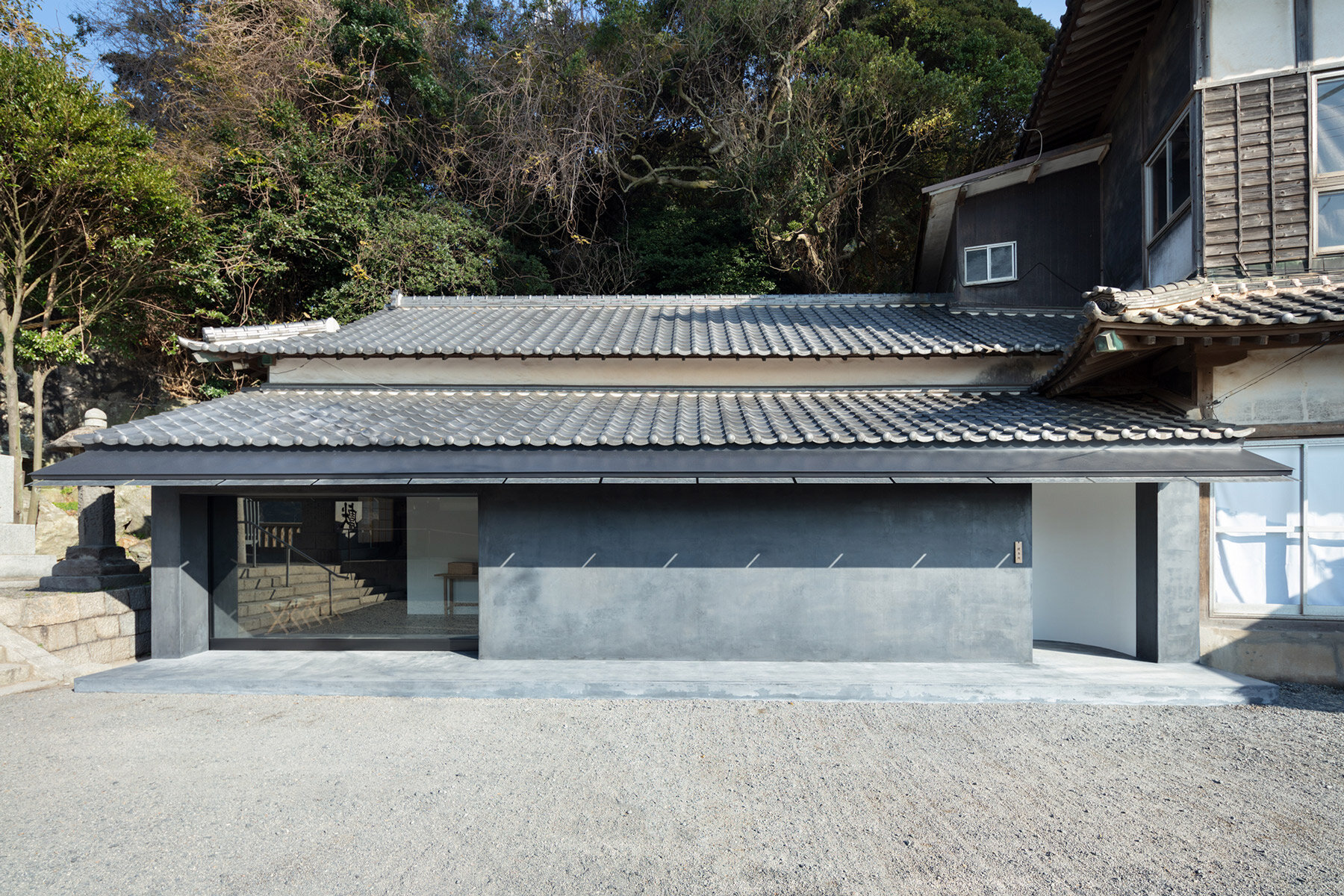 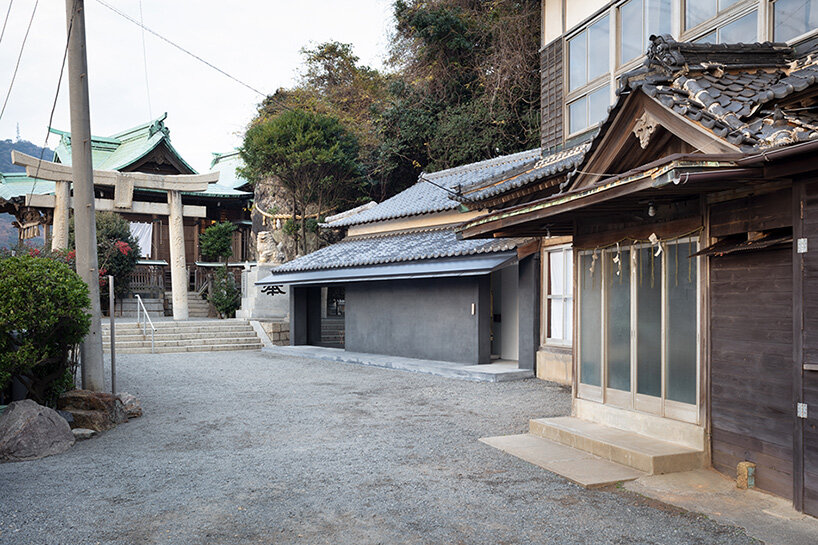 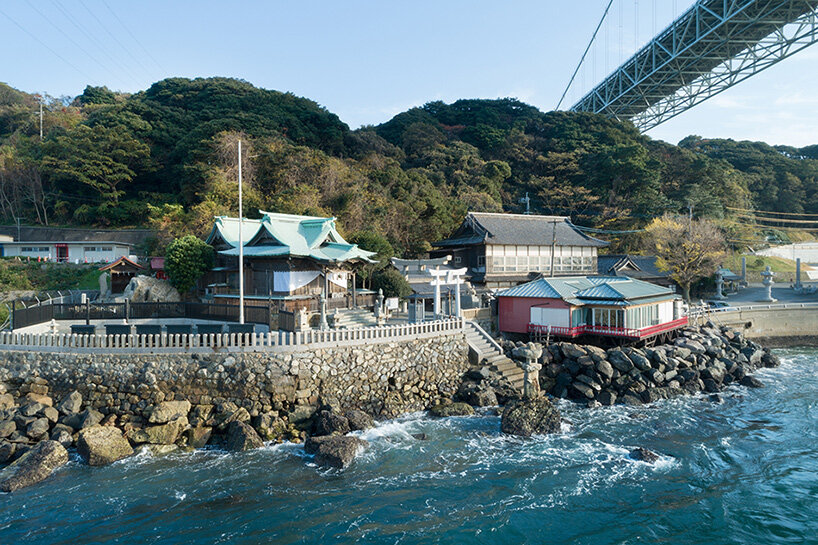 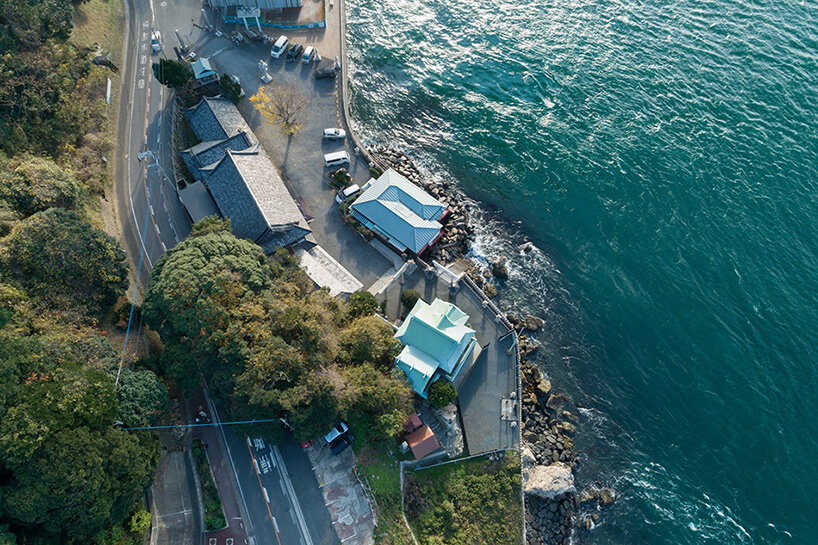