ACRC, the architectural design & research institute of zhejiang university, has completed the xu wei art museum and green vine square within the shaoxing ancient city in china. robust granite walls, extended glazing and ‘herrington slope’ roofs complete the cultural ensemble which emerges as a new public landmark for the city. ‘we try to establish a kind of new spatial expression, with a view to connecting the surrounding built environment mainly based on the small scale of traditional dwellings, meeting the demands of contemporary art exhibitions for large space, and meanwhile discussing the topic of ‘modernity in historical context’,’ the architects share. 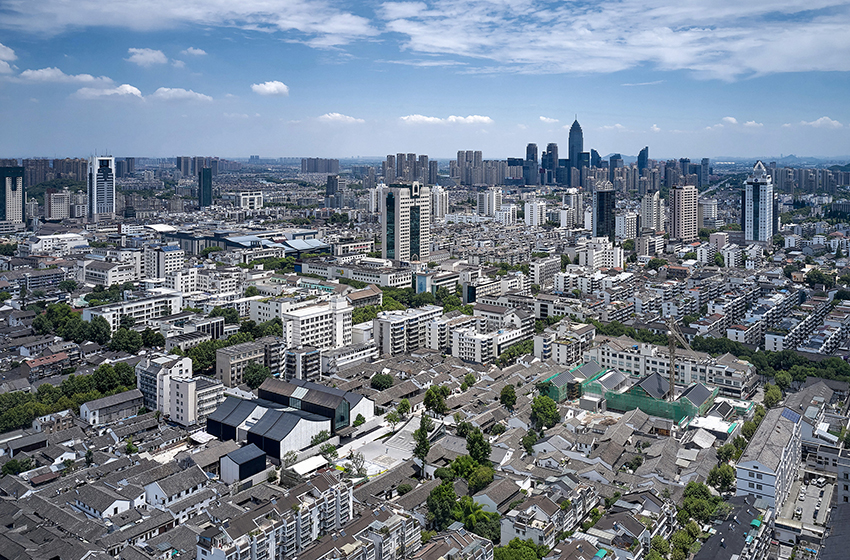 drawing inspiration from the large space combination of the old shaoxing machine tool plant, and adopting the construction logic of “longitudinal five-entry, and horizontal three-fold unequal herringbone slope modeling”, the team at ACRC completed the distinctive volumetry of the xu wei art museum. the two five-entry floors on the east and west sides serve as the main exhibition space; the middle floor spans two floors, opening up the longitudinal five-entry pattern; and the ground floor is a foyer running through the north and south, while the shared hall and small temporary lecture hall are located on the second floor. the shared space on the upper and lower floors also serves as a transfer hub between exhibition halls on both sides. in addition, an internal courtyard was set up in different flat floors on the east and west sides, which reasonably separates the space volume of the exhibition hall and enhances the indoor permeability. 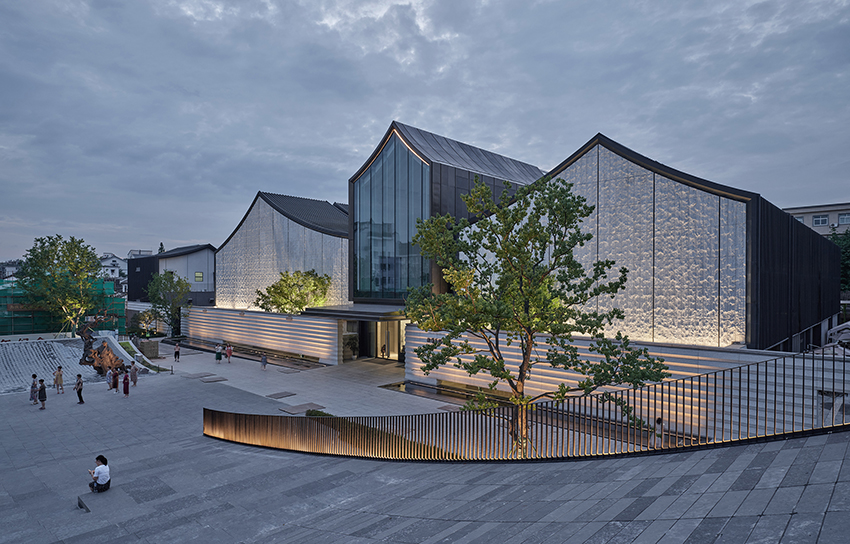 two herringbone slopes, one big and one small, are ‘lifted up’ on the east and west sides of the square

besides spatial treatment, the contemporary expression of shaoxing’s traditional style is also reflected in the fine selection of materials: the black metal texture unfolds from the roof along with the herringbone slope house to the end of the second floor on the east and west sides, and the white granite solid walls are selected for above the second floor in the north-south direction; the first floor is concave on four sides for repeated pavement of the unitized texture of transverse herringbone slope, the curtain wall is treated locally according to function and unified modulus, and the gray granite and curtain wall materials are unified. the building presents typical black, white, and gray tones as a whole, while local blank space and three-fold herringbone slope contour lines reveal the contemporary landscape intention of the architects. 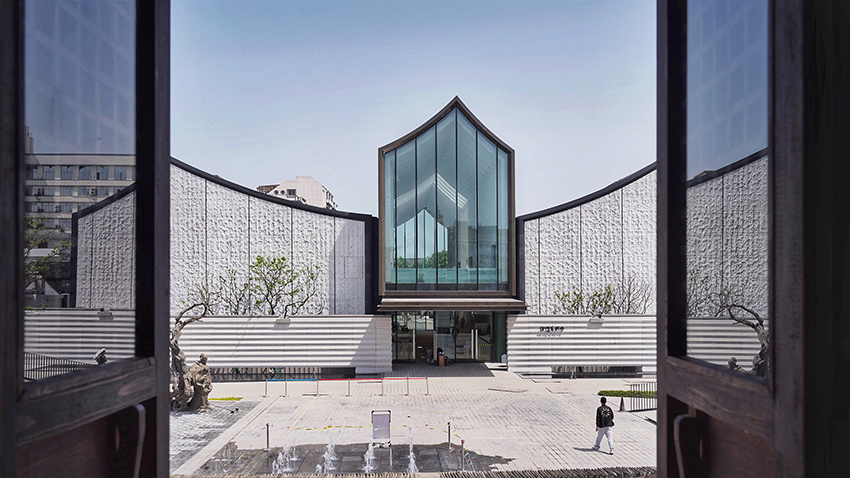 located on the south side of the venue, green vine square connects the art museum on the north side with green vine study on the south side, paving the way for the frontcourt atmosphere, and meanwhile serves as the visitor center to carry the crowd distribution function. the square continues the construction logic of the art museum, and ‘lifts up’ two herringbone slopes on the east and west sides respectively: the west side is slightly raised to enclose the square, while the east side is slightly higher.

with the help of local sinking, the volume of the visitor center is skillfully hidden under the herringbone slopes. the square as a whole is paved with dark stone, and the west side creates a flowing water scene with the help of a slope. meanwhile, an original ‘xu wei statue’ stands on the southwest side of the art museum and the northeast side of the slope, making it the visual focus of the square and the prospect of the art museum. the step-like setting at the beginning of the east slope serves as an auditorium to provide an appropriate place for distribution and gathering. 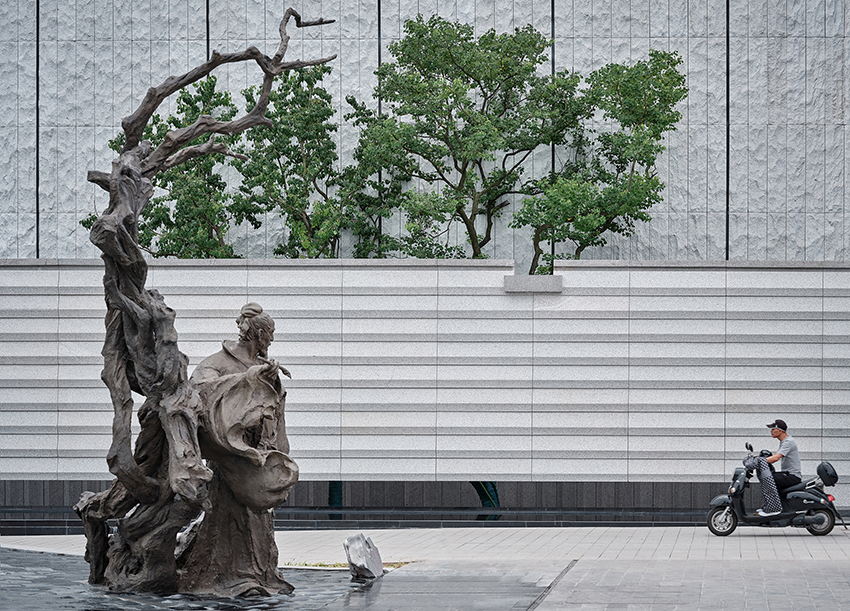 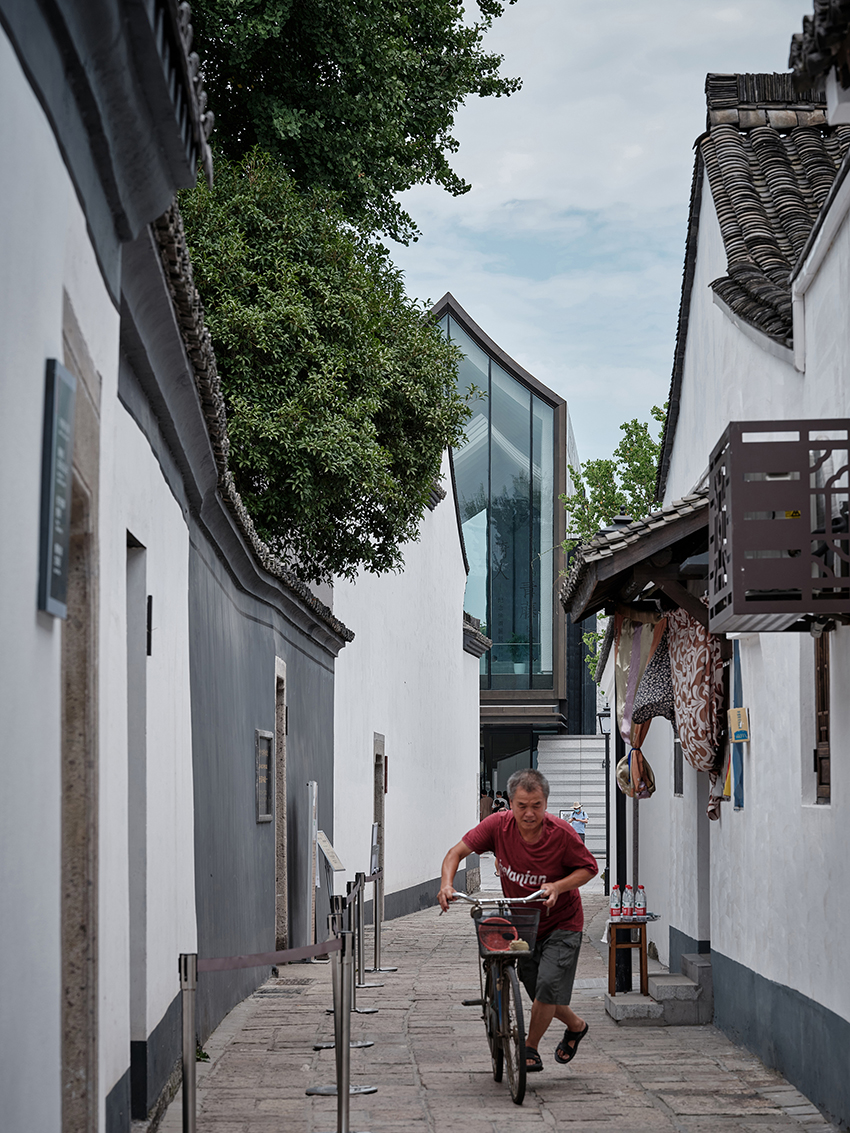 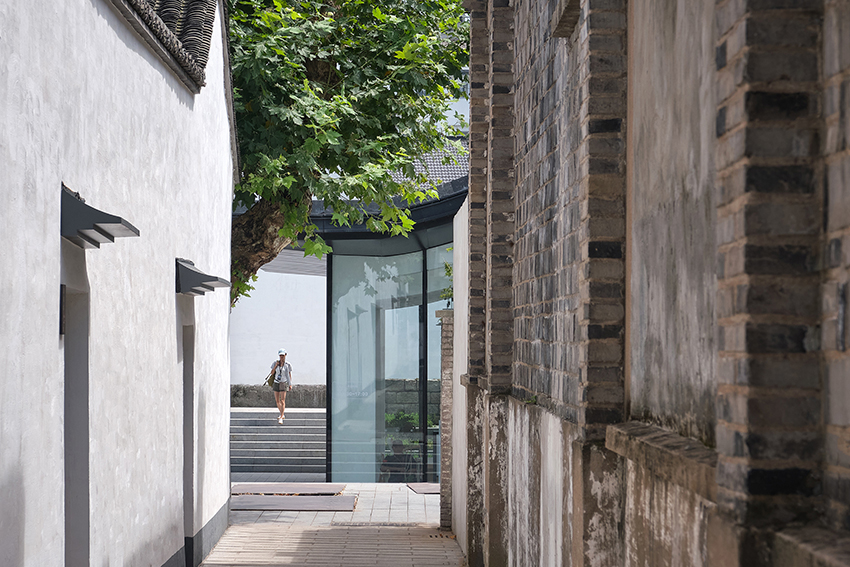 in the opposite view of the old wall and the residential buildings, you can see the sunken qingteng square (the visitor center) 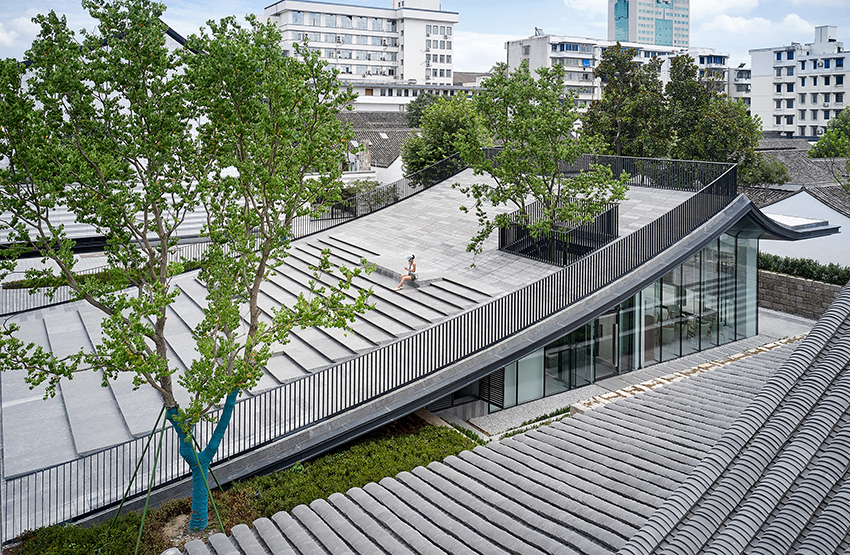 the visitor center hides under the herringbone slope view 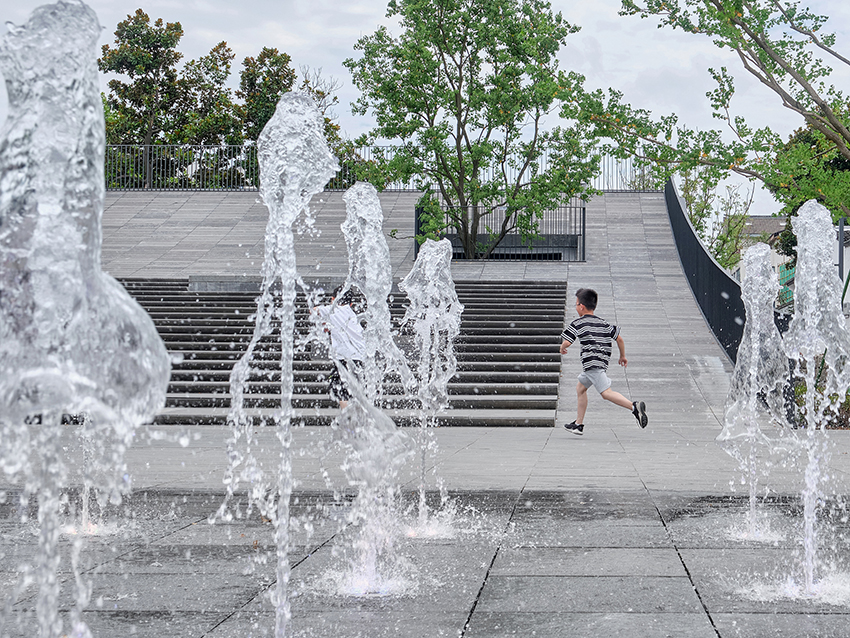 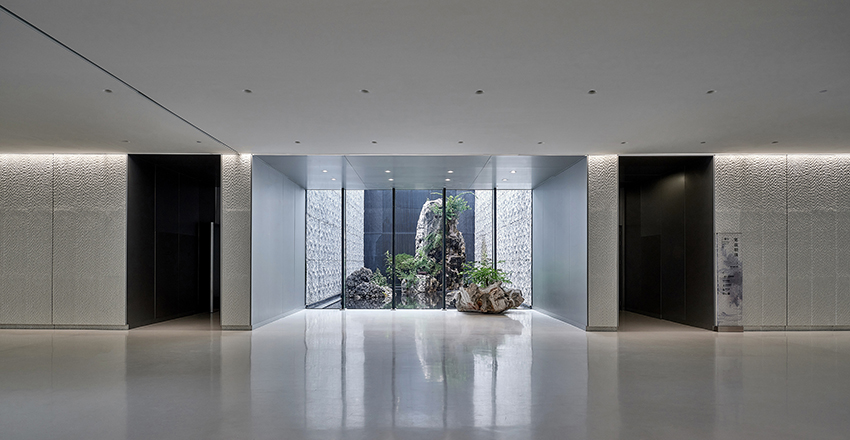 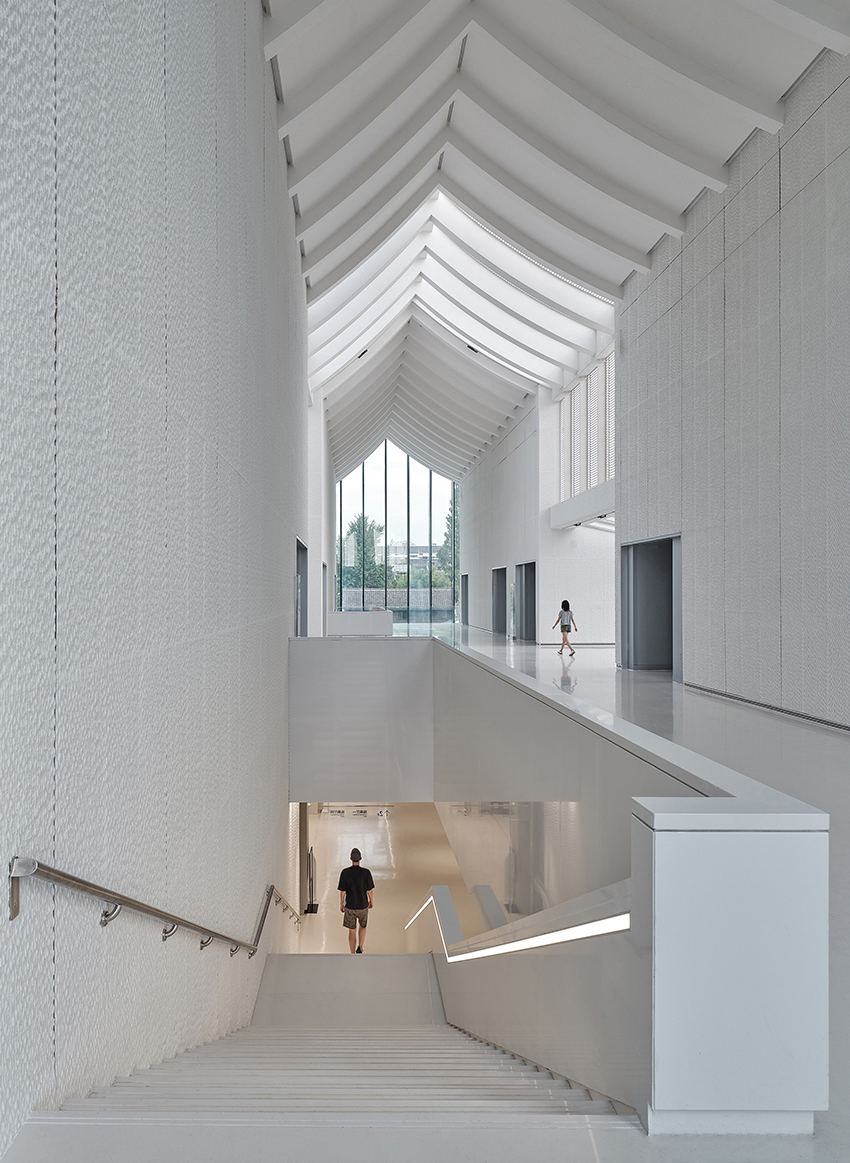 the atrium on the second floor provides multiple use scenarios such as rest, assembly, viewing, and photographing 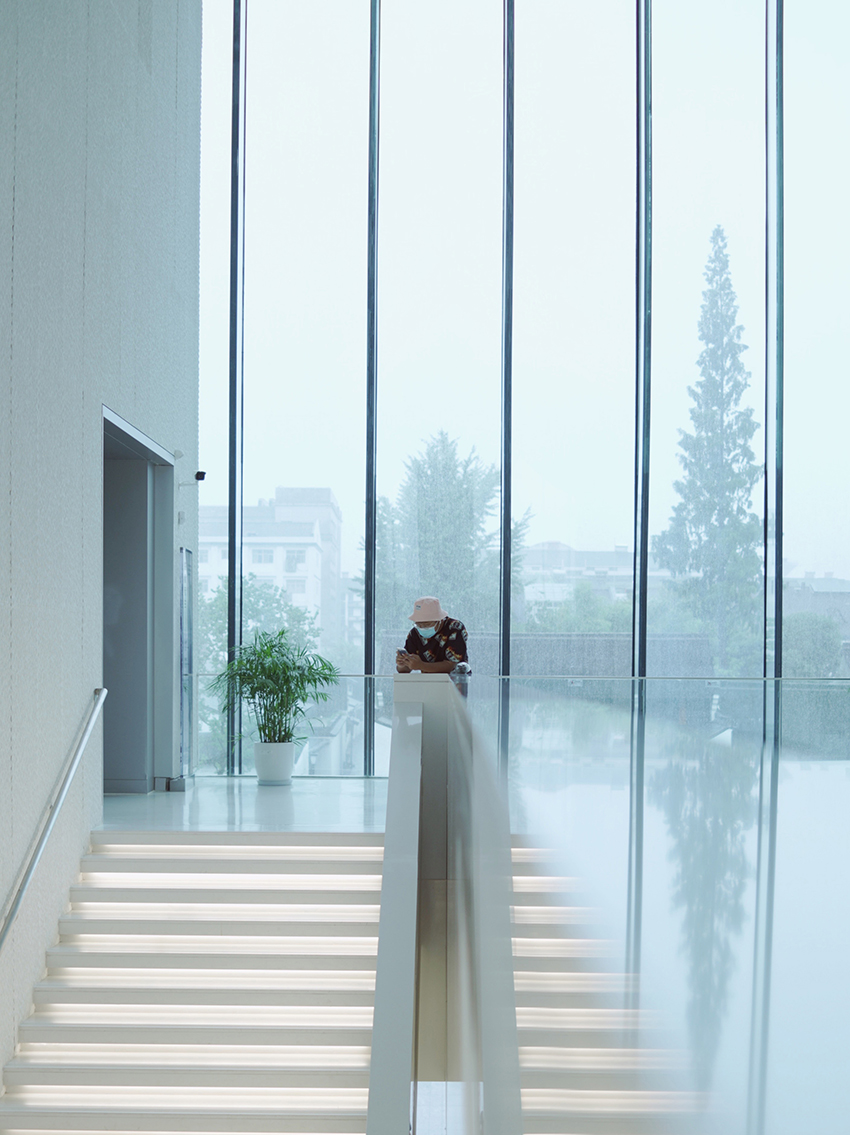 the north-south curtain wall design of the second floor connects the texture of the ancient city, making the changing city appearance a new exhibition content