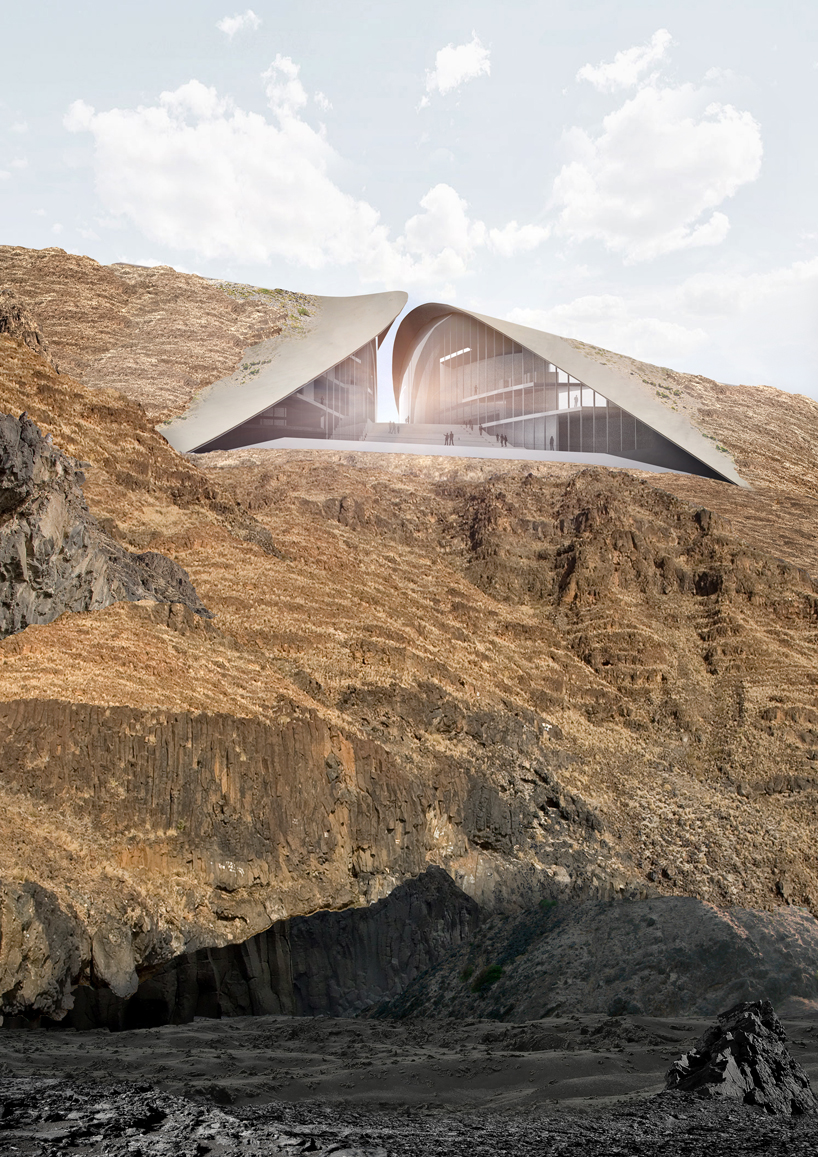 adrian kasperski‘s first impulse for choosing a future work topic was seeing one of the reports by fernando guerra–a famous portuguese photographer of architecture. the photos presented an almost unnoticeable building hidden in a nearly lunar landscape. after analysing the topic, it turned out that this building served as the cultural and administration centre of the national park of the fogo island in cape verde and was located inside an active volcano. curiously enough, the design team had discovered there a local community of more than 1,000 people, who illegally inhabited and tilled the ground in the nationally protected areas.

the architecture of the building can only be admired on photographs these days as the building functioned only for a year. in the wake of a volcanic eruption in november 2014, it was completely destroyed. hundreds of people from the nearby village chã das caldeiras were forced to abandon their homes. 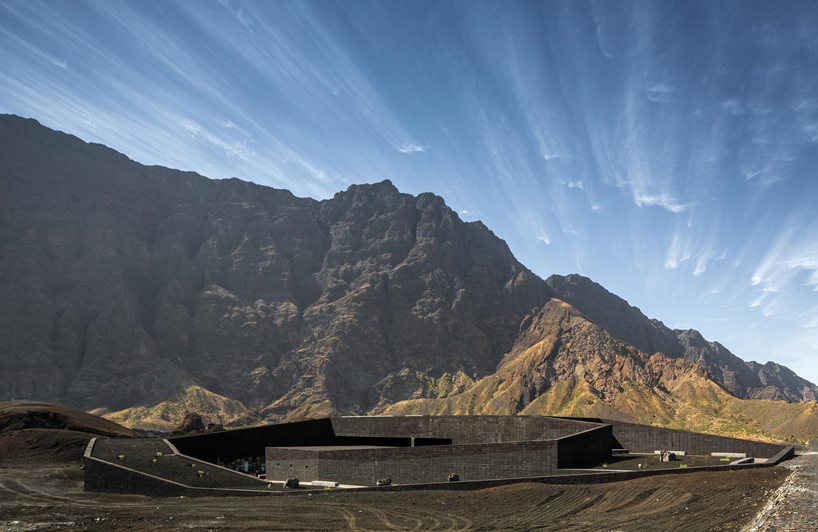 envisioned by adrian kasperski, the project aims to develop three different structures. the first one is the centre of culture and volcanism that is a continuation of the activity of the facility destroyed during the eruption. the chosen location is on the border of two entirely different landscapes. the project was treated as an opportunity to create a connection between the inside and outside of the island. the building seems invisible from a distance and only when one approaches closer, a slight cut in the caldera starts to emerge. the entire cubature has been hidden underground. an important element is a public area which not only makes up for the entrance to the interior but also serves as a multifunctional square. along with high glazing on the sides and slotted roof above, it frames the views of the volcano located precisely on the axis.

the next phase is a facility that combines in itself the functions of the vineyard and the hotel, which result from a desire to activate the area (based on the phenomenon of the alternative tourism) and to use the grape vine cultivation tradition. the ramps, which are the extension of the trail, lead people in the observation deck, which offers a magnificent panoramic view of the insides of the caldera, of the volcano and the outside of the island. the whole refers to the terrain form–the view results from the topography, where the facility is located. on one hand the form is slightly raised above the ground level, forming a horizontal block, on the other hand, it is embedded in the rocky slope of the rising caldera. the central part was designed to be a generally accessible square. this solution allowed the consistent combination of the two functions. 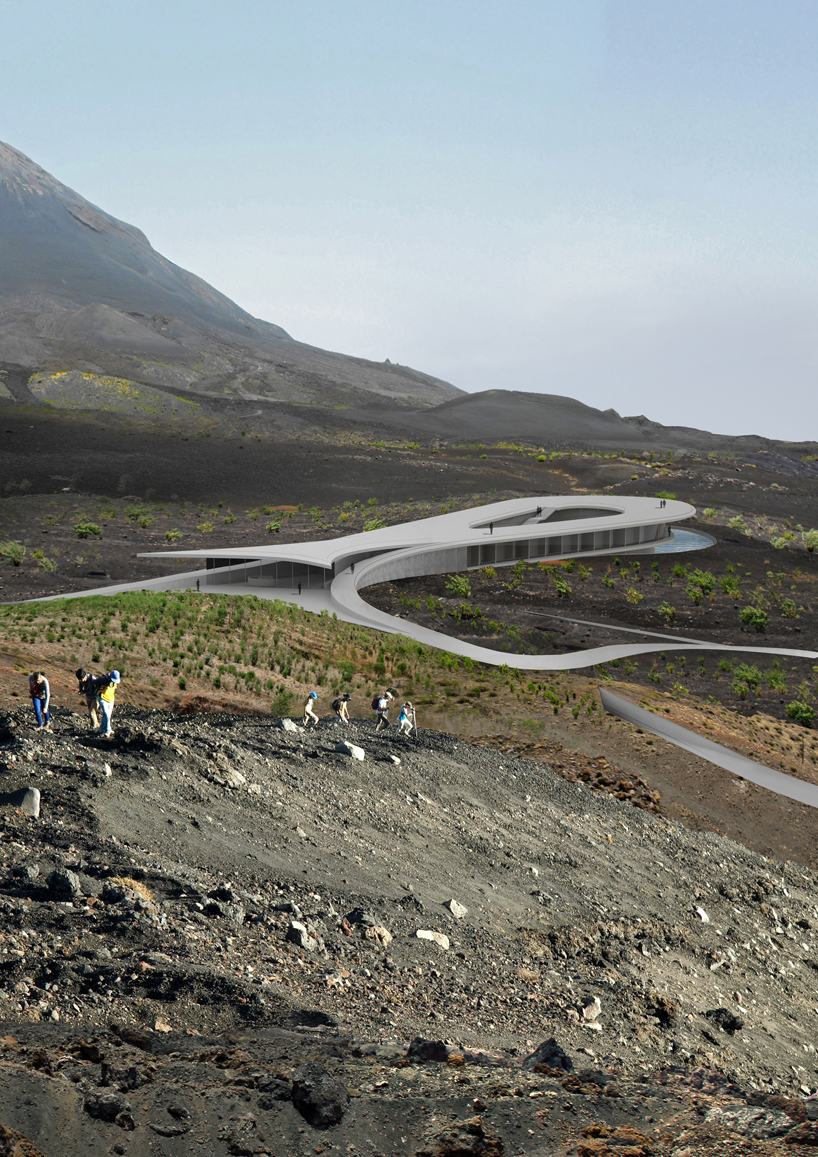 perspective of the winery and hotel

the last intervention would be building a new village–creating a place which the community, separated by the volcano, could once again inhabit. the village was located near the new northern road to caldera. in order to minimise the impact of the road on the living conditions in the village, the park, which adjoins the main square of the village, has been designed. in its vicinity have been located the most important facilities such as a school, a market and a church. the whole is complemented by a network of alleys, irrigation canals and theme pavilions. based on the natural terrain and the layout of the streets, the houses have been designed as cascaded, hillside buildings. the space behind the houses has been used as a place that could serve as orchards or vegetable gardens, on which residents could produce their own products. 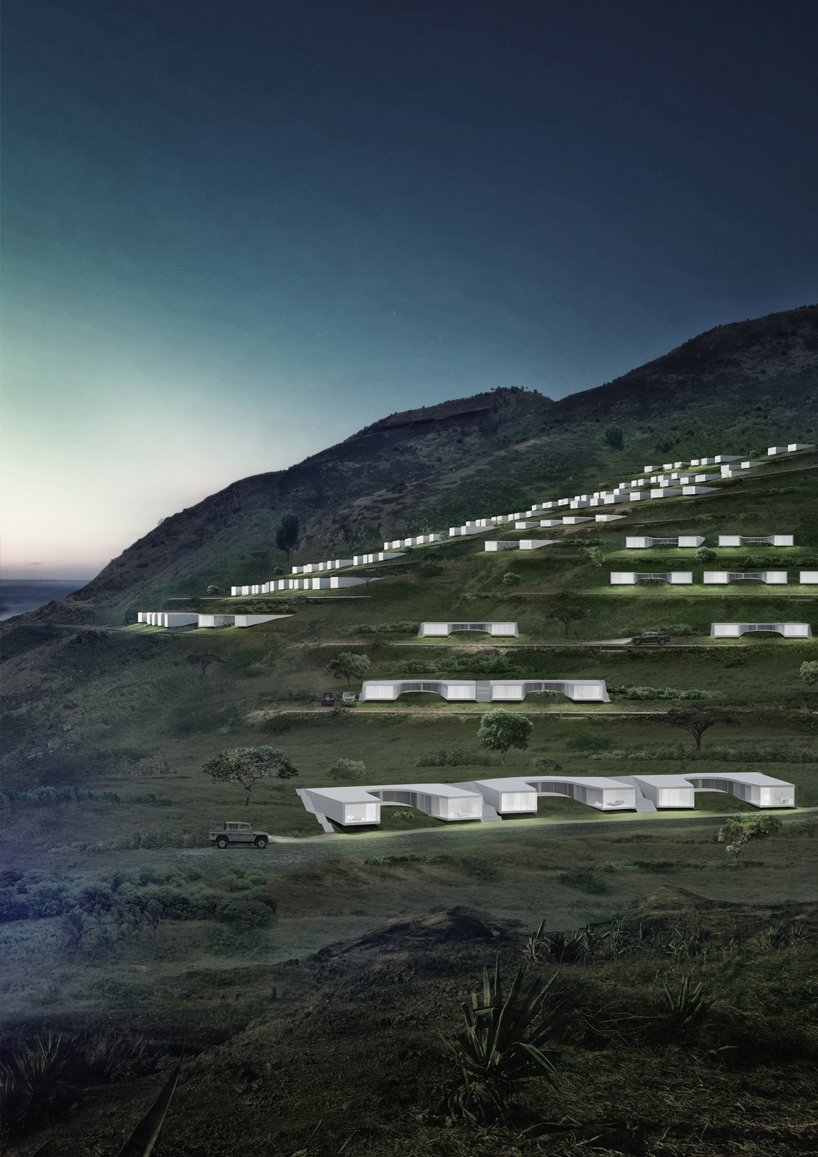 perspective of the new village

the vision of the development of the fogo island along with the active volcano caldera is a very complex project because it combines the cultural issues, social issues, nature and architecture. the aim was not to create the building itself, but analysing the relations and processes of the human environment and interpreting it into the language of architecture. according to fabrizio barozzi from estudio barozzi veiga, ‘architecture can generate certain positive changes in the community for which it is built.‘ 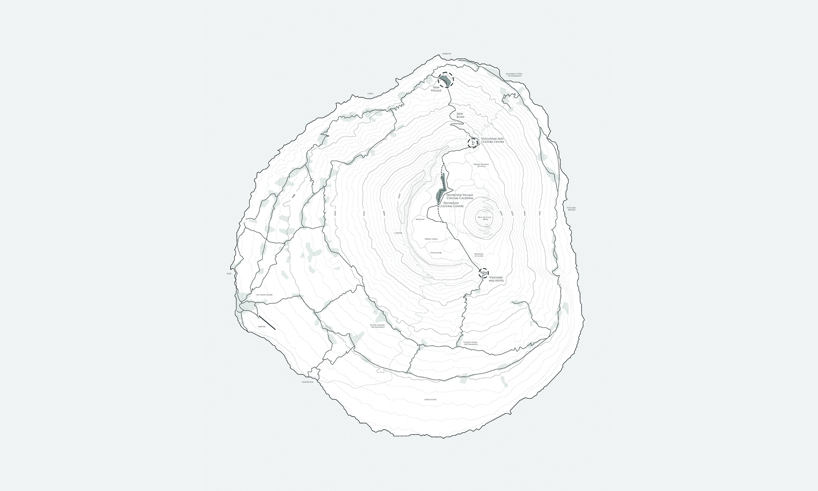 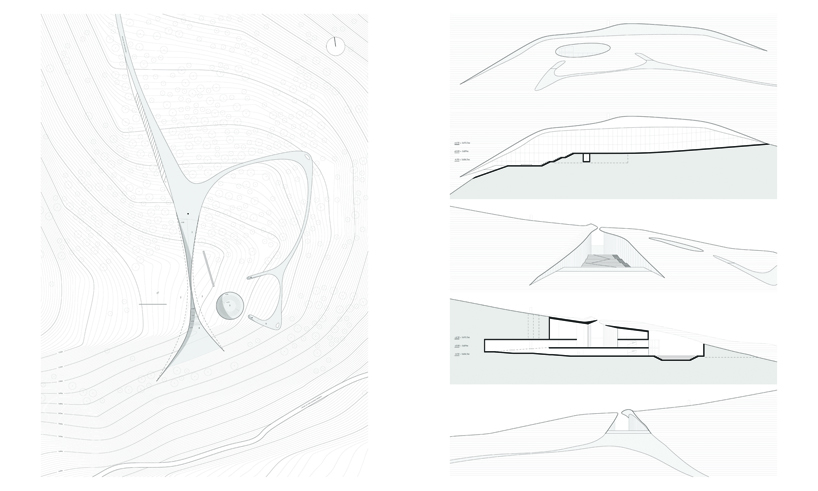 situation plan and sections of the cultural center 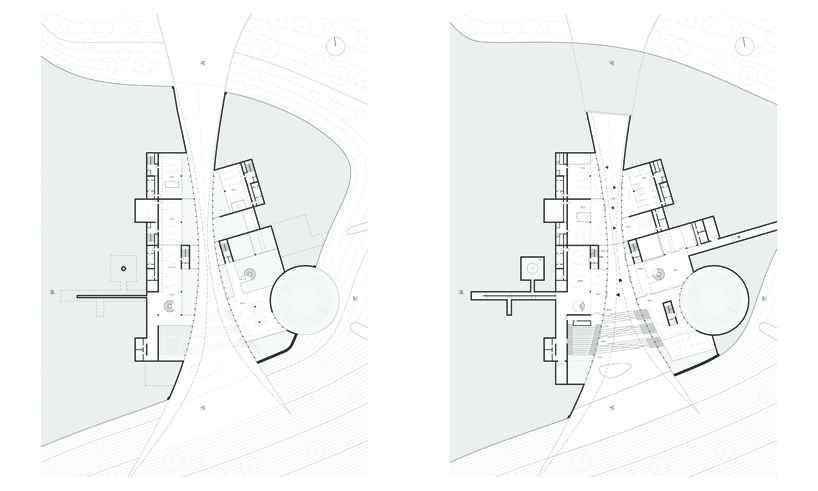 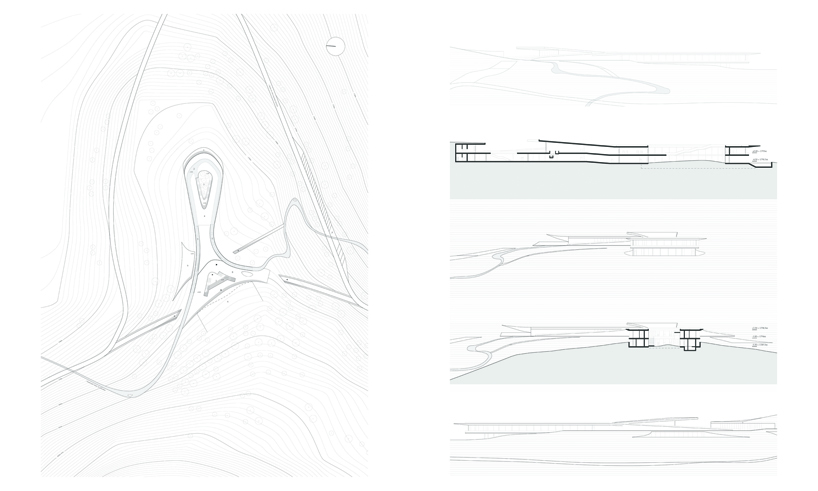 situation plan and sections of the winery and hotel 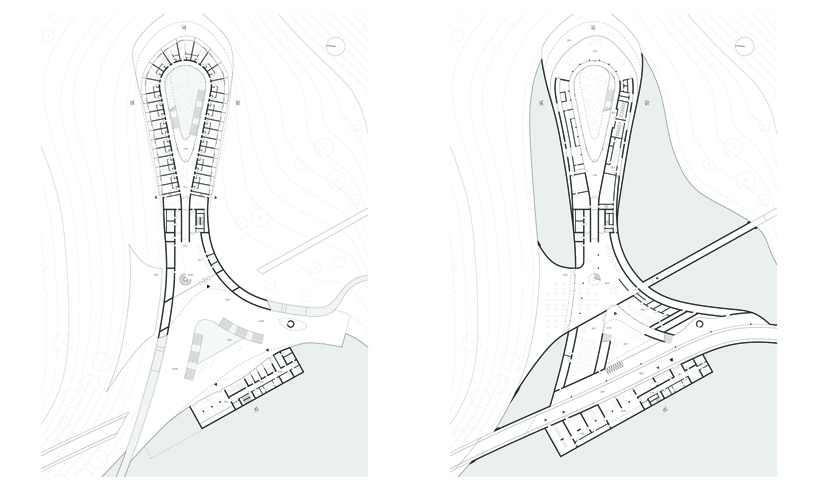 plans of the winery and hotel 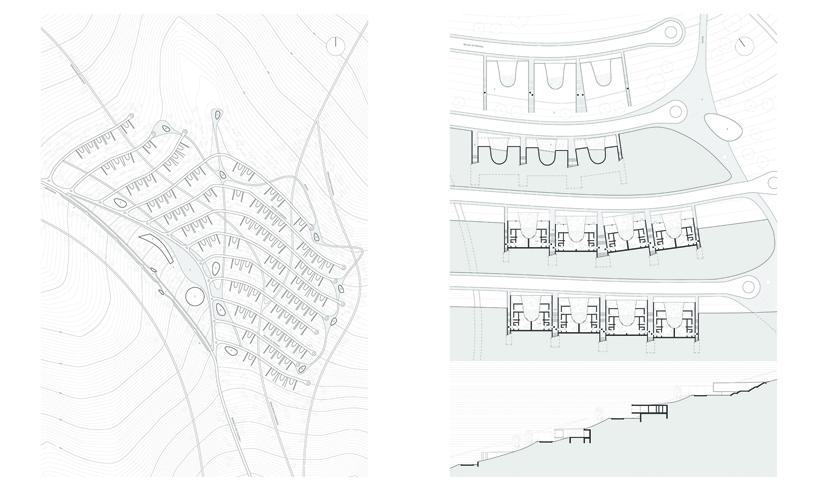 plans for the new village 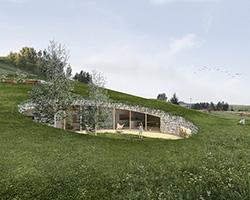 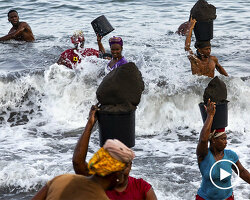 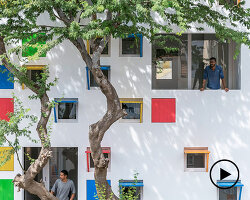 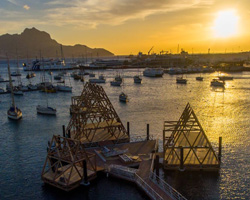 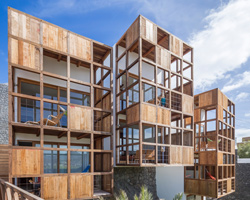 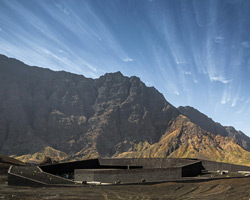