alma-nac explores the reuse of light industrial buildings with this retrofit project in south london. the practice has repurposed a two-story brick warehouse in a former industrial estate in south bermondsey to create professional music studios for client, the axis. 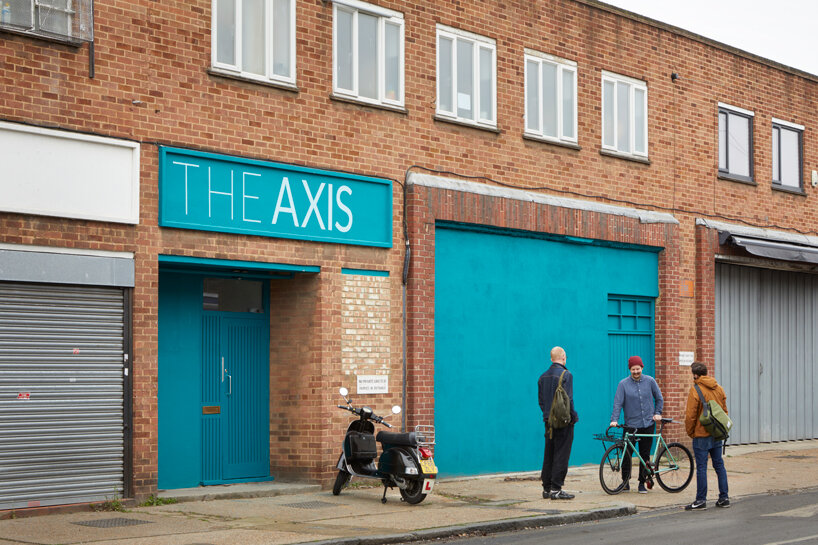 the project — called ‘the axis on ormside’ — marks the first facility for the axis and it provides a series of spaces for creatives to write and produce music, network, and collaborate. the studios offer flexible working as they’re open 24 hours a day and users can choose from a daily membership to long-term tenancy. 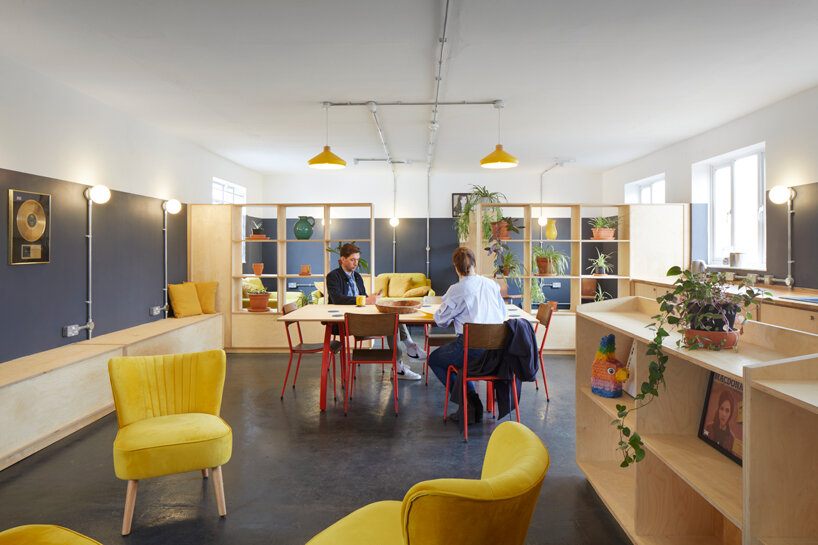 the post-industrial neighborhood of south bermondsey was selected for the new venture for its lower rents and open-plan loft spaces. upon entering the previously vacant warehouse, there’s a small reception desk that manages daily access; longer-term tenants will have keyless access using a mobile app. above the reception, there is a green room – an open-plan communal space for client-facing meetings, networking, socializing and relaxing – and a space to accommodate music management personnel joining songwriting sessions. 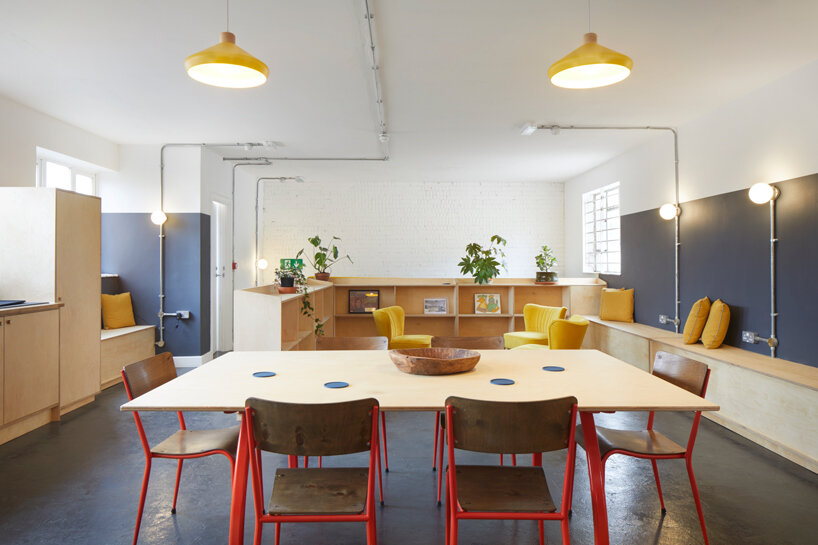 within the main space of the warehouse, alma-nac has inserted an internal street made up of ten studios, which have been made soundproof thanks to gillieron scott acoustic design. this space is articulated by vibrant colors in keeping with the axis brand and CNC-routed plywood that clads the studio walls. small touches such as the doormats and lamps over each door really reinforce the street-like imagery, while the new transparent roof panels bring in natural light, blurring the line between inside and out. 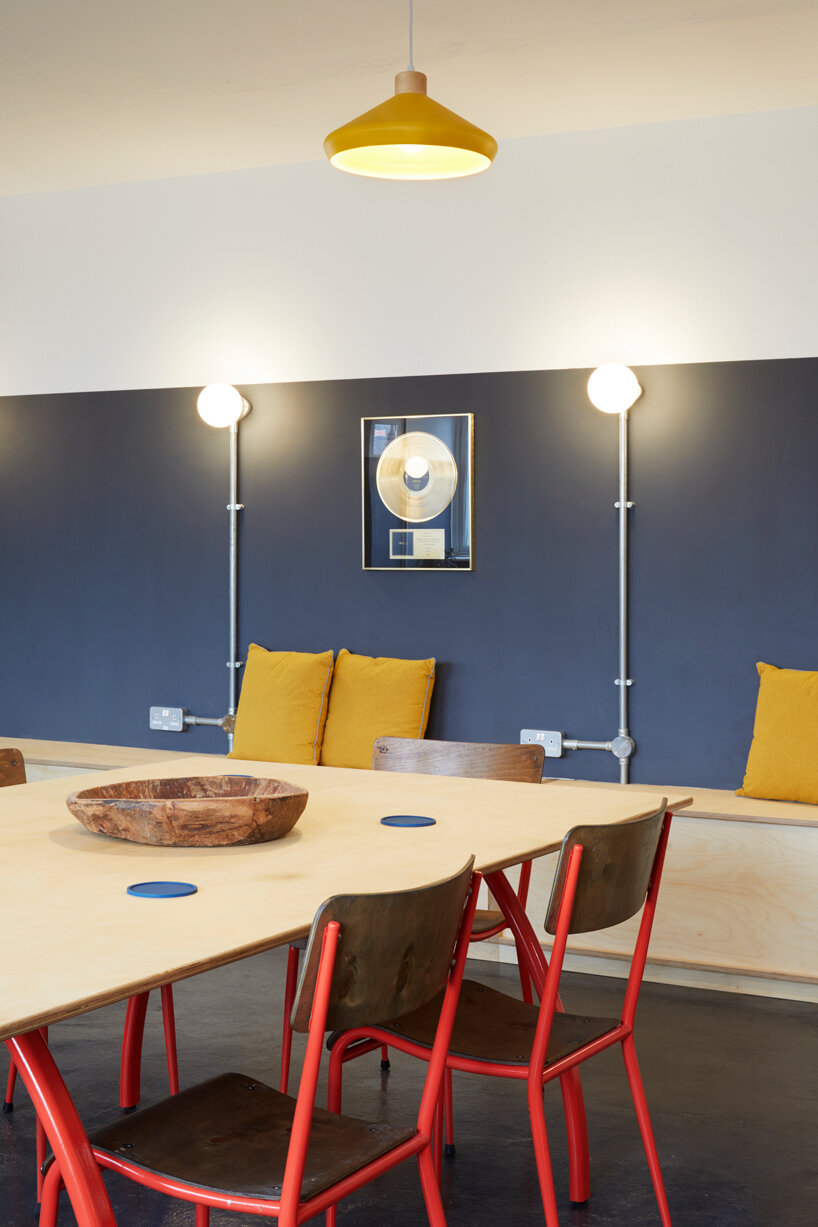 inspired by enzo mari’s autoprogettazione low-tech approach, the interiors are characterized by a utilitarian aesthetic and the use of low-cost materials. the texture of the ‘street-facing’ side of the studios is fabricated from CNC-routed plywood cut in such a way that there is zero waste. the green room is furnished with reclaimed and upscaled furniture. 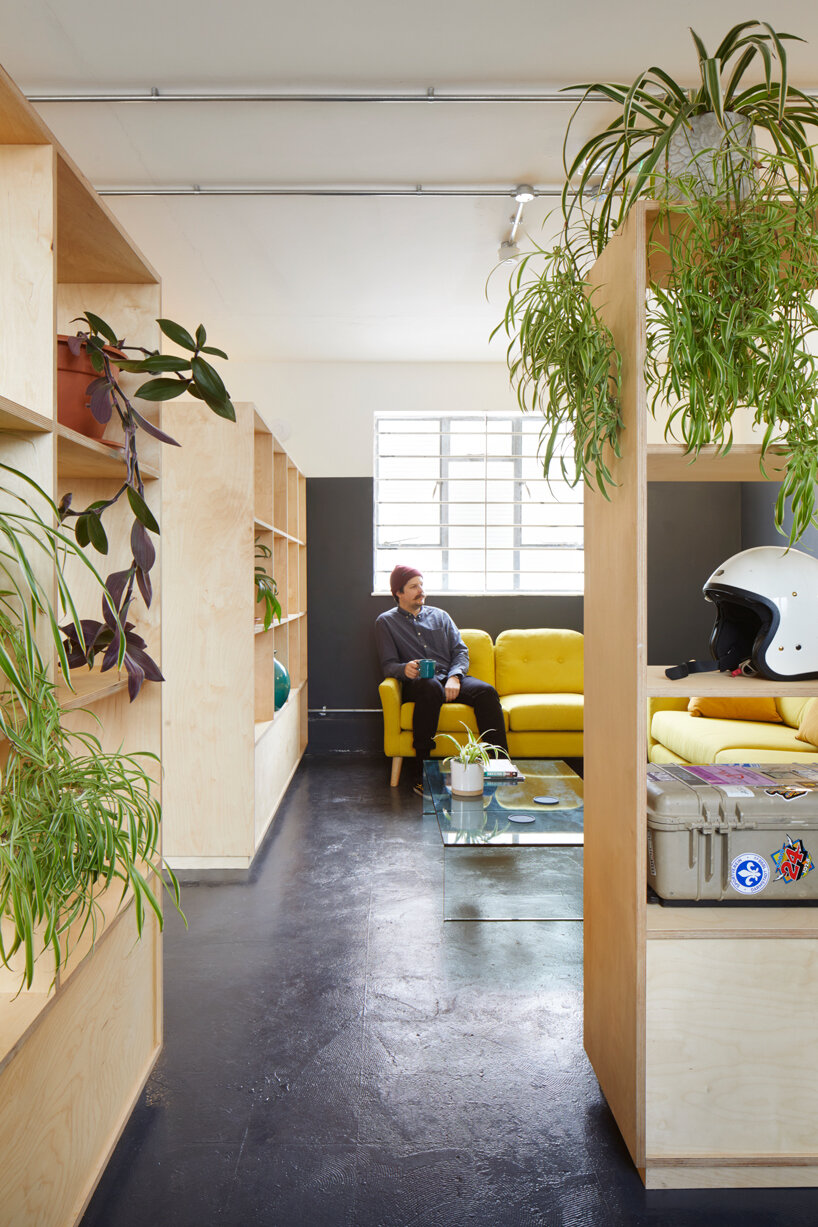 chris kiely, director of the axis, said: ‘alma-nac’s vision has really transformed the building, turning what is essentially ten acoustically isolated boxes in a warehouse into something that feels homely and professional at the same time. the aesthetics coupled with studio soundproofing by gillieron scott acoustic design really sets the space apart from anything else in the market right now.’ 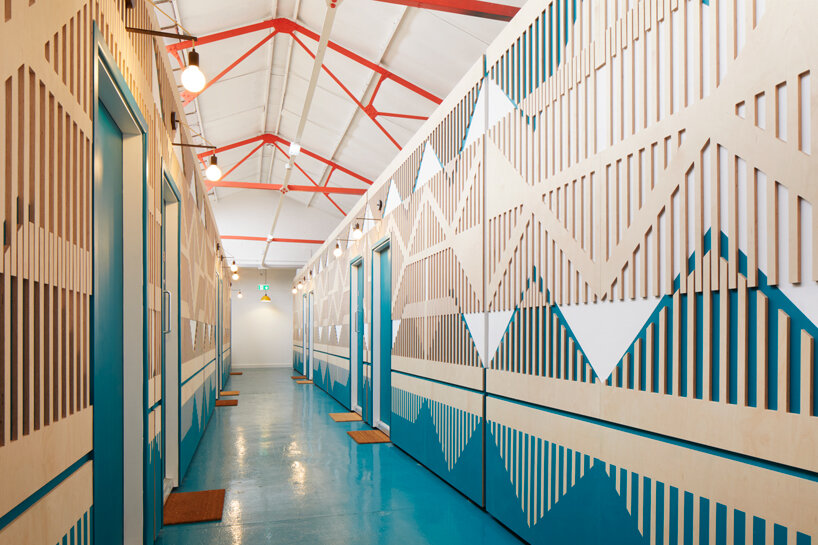 chris bryant, director of alma-nac, said: ‘the axis is our latest project in a line of enquiry exploring the reuse of light industrial buildings. there is something innately satisfying about taking a simple obsolete structure and turning it into something very specialized. the existing building provided a weatherproof enclosure and the freedom to create a series of carefully controlled local environments, and to position them as if each studio were a house in a street. this arrangement allows the occupants to meet and work independently while retaining the expanse of the original structure. the pattern of the facades is inspired by kinetic artist carlos cruz-diez’s physichromie series (1959) investigating how color and pattern change as perspective changes, in this case as you move down the street.’

‘we were lucky to work with an ambitious client, and together we pursued a zero-waste strategy, including aligning the size of the studios to standard material dimensions and using every part of the CNC routed plywood sheets. it has been an immensely difficult time to build, but the whole team has stuck to the original aspirations of the project and created a unique offer for musicians,’  continued bryant. 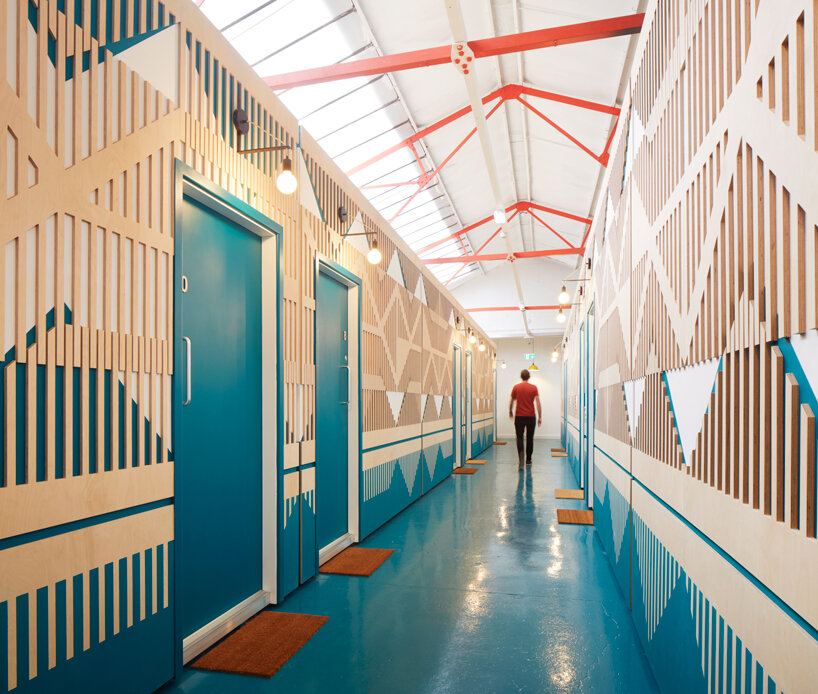 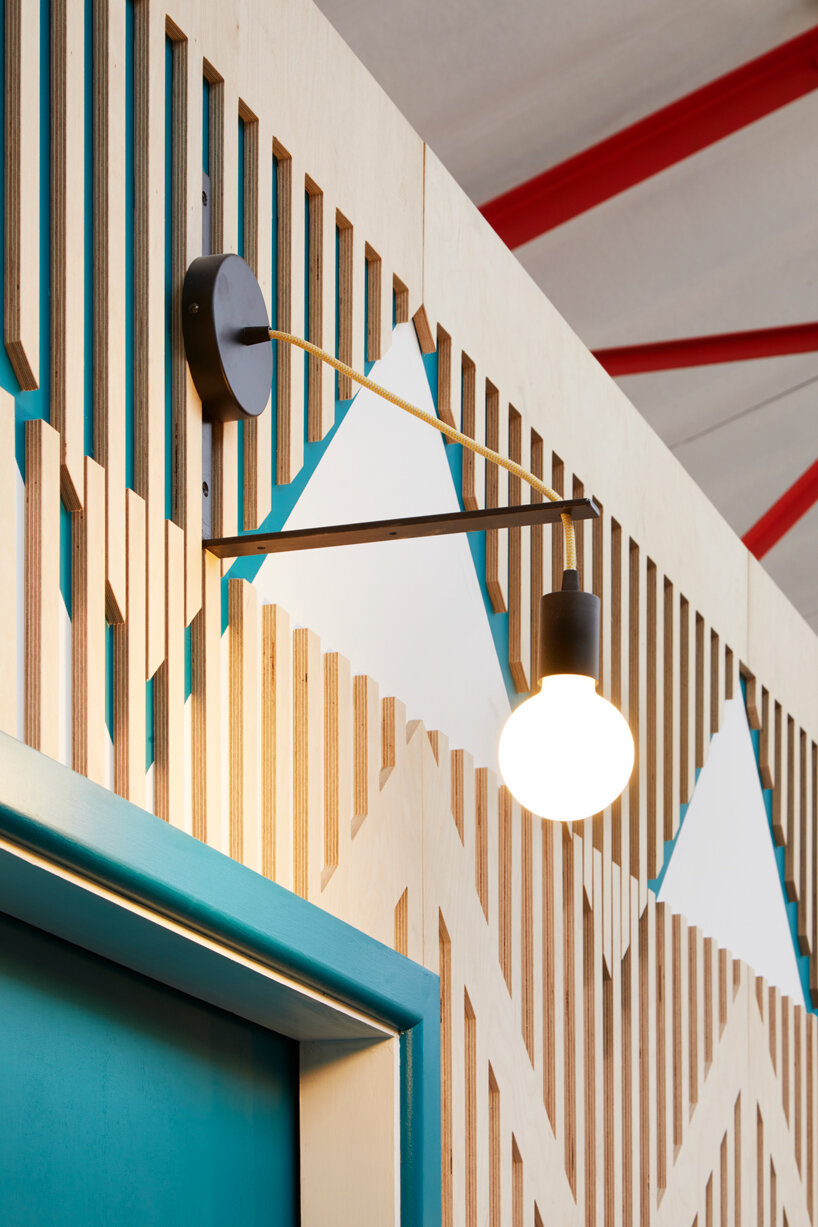 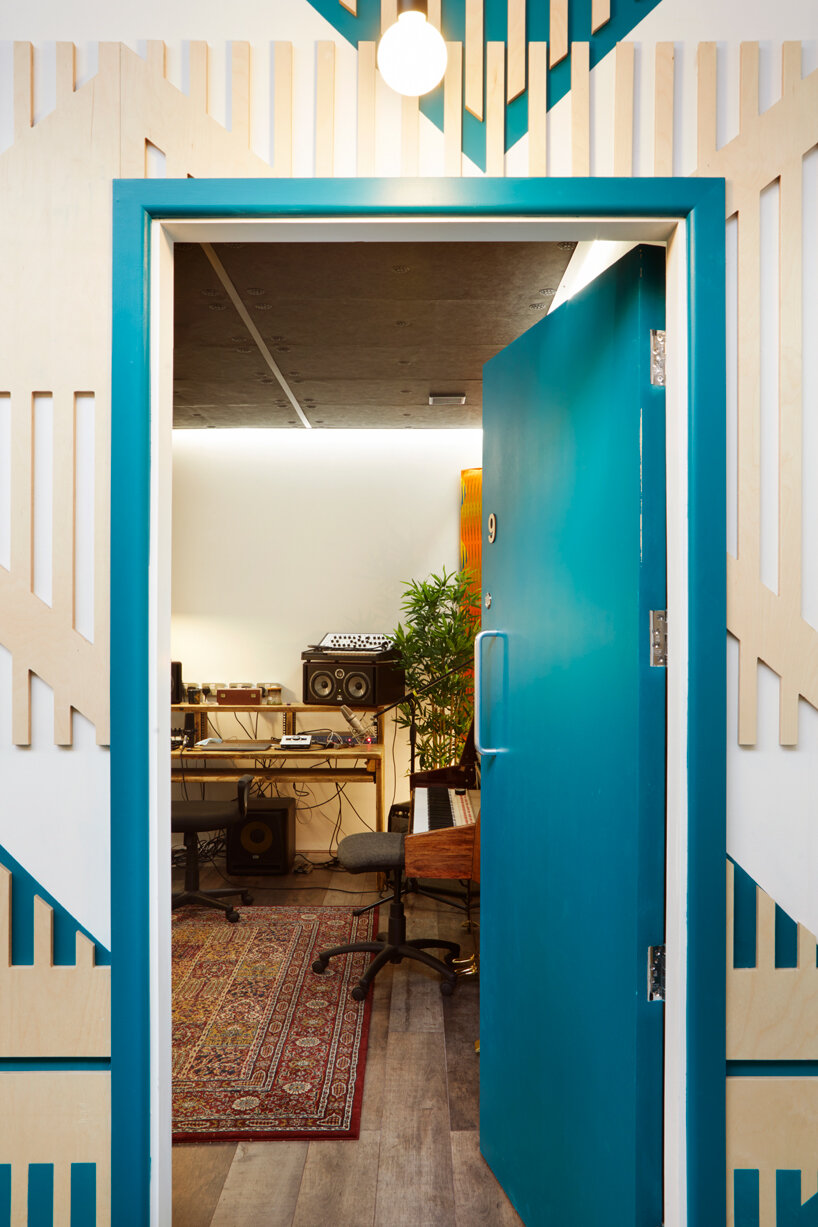 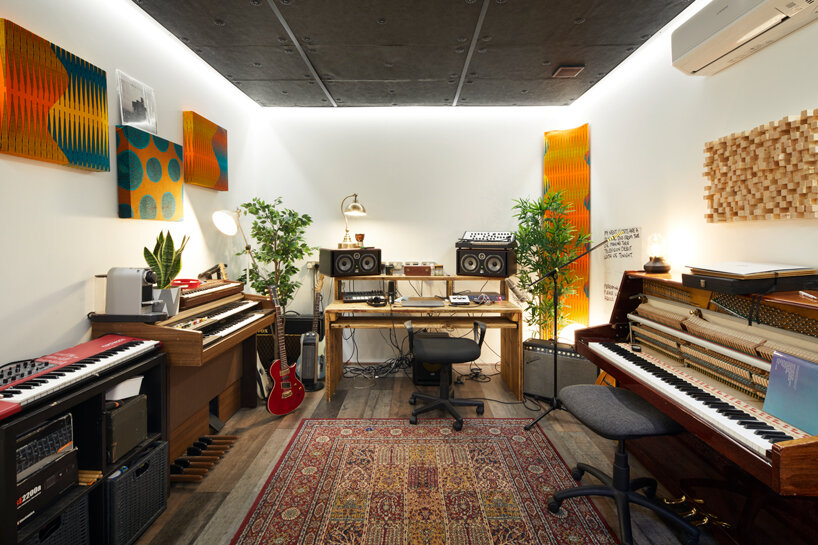 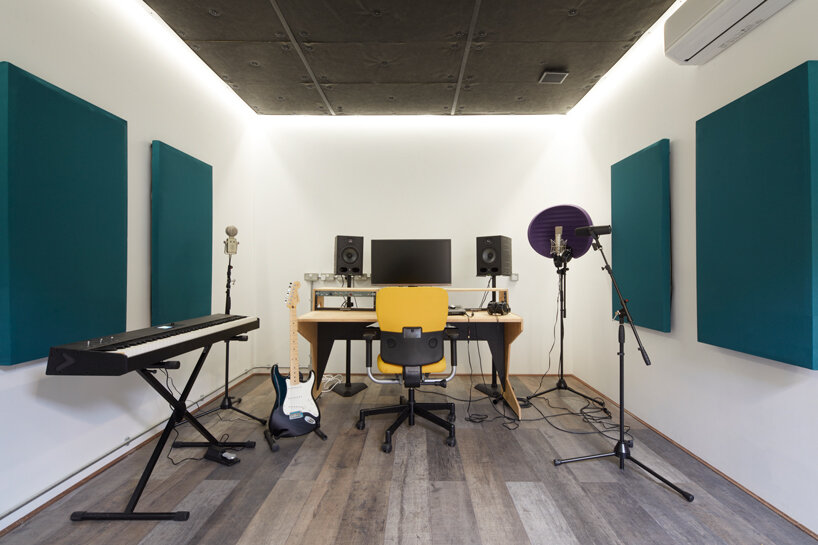 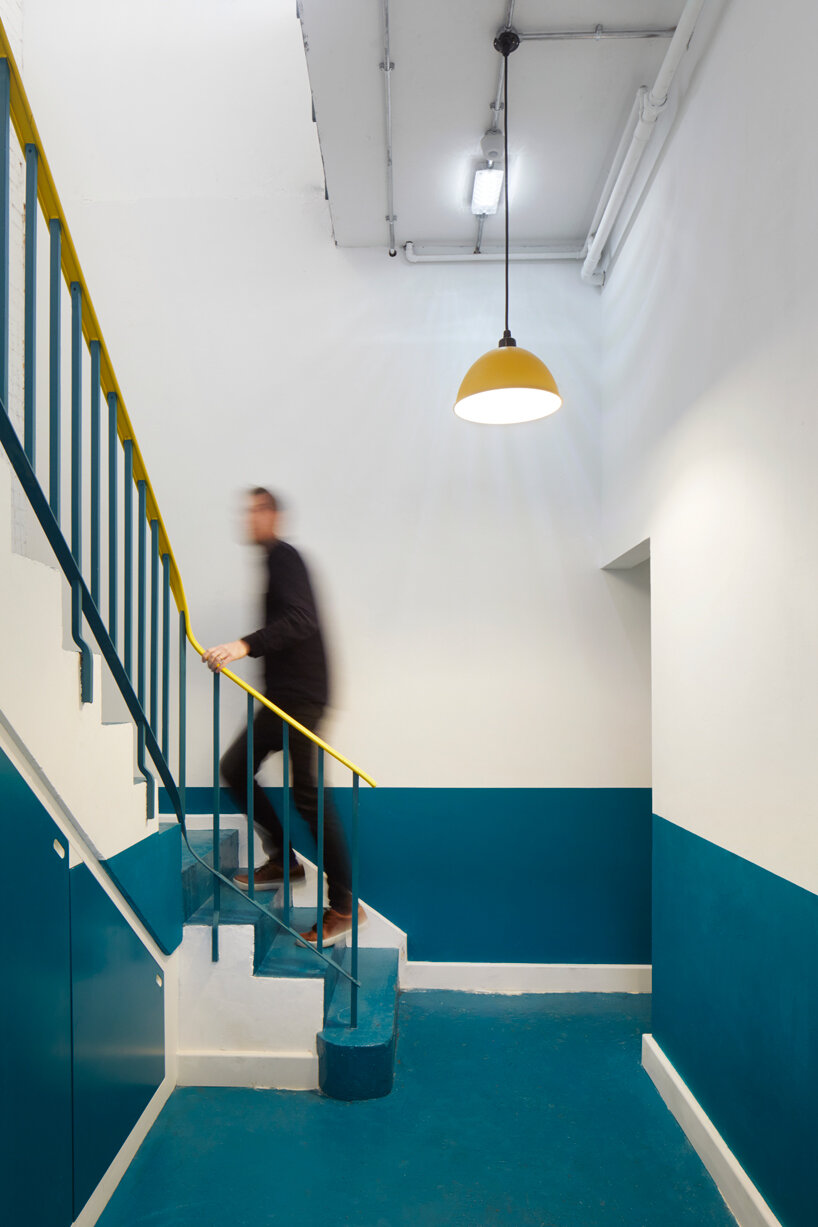 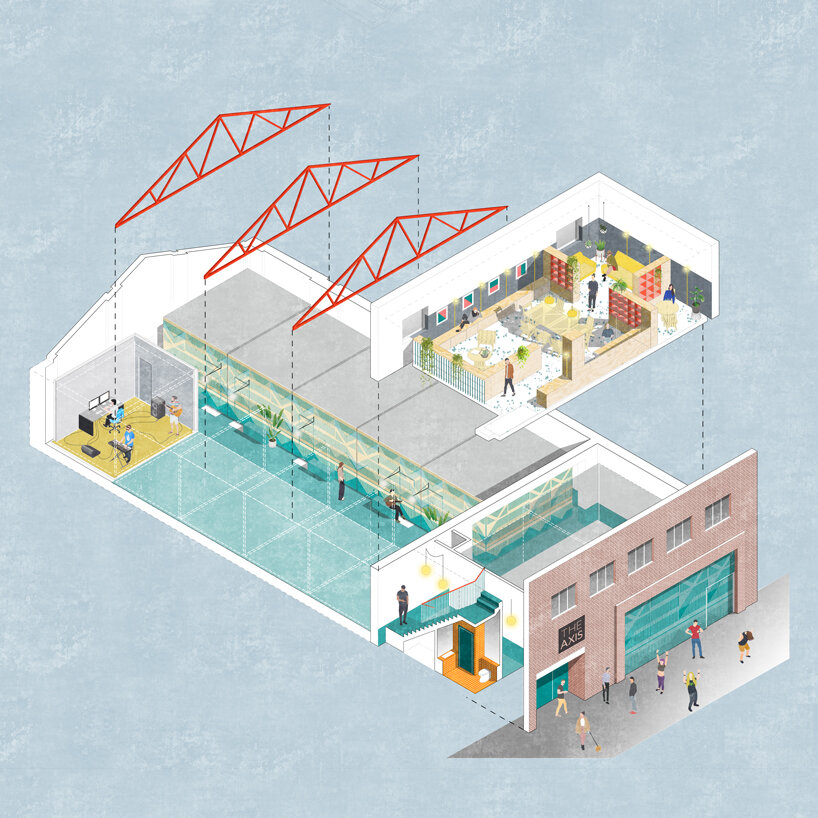 name: the axis on ormside