may 10th update: MoMA has just announced that it would  reconsider the demolition of the beloved american folk art museum in the wake of the selection of new york-based firm diller scofidio + renfro to handle the purported five-building expansion. the architects were responsible for thethe redevelopment of the lincoln center campus and have been long-time friends and colleague of the endangered american folk art museum’s architects, todd williams and billie tsien. whether the building can be spared remains an open question, albeit one that softens the definitive announcement of the building’s destruction just one month ago.

april 10th: news of the planned demolition of the 12 year-old american folk art museum expansion designed by revered tod williams billie tsien architects has spread across the nation received by a range of responses. for most, the museum is a much welcomed architectural gem with a sensible design and a mastery in material; it is studied by students, it is an archetype for what is considered to be ‘great architecture’ in the 21st century. people seem to refer to its innate spirit as a work of art, transcending the traditional trappings of what defines a ‘building’ – architecture critic herbert muschamp speaks of its‘heart’ being ‘in the right time as well as the right place’, declaring it a ‘midtown icon.’  others however, suggest the museum is unable to carry out itsfunctions effectively. critics have opined that the small architectural treasure sealed its fate when it was built in the lot adjacent to the much larger institution: the museum of modern art.

‘it’s very rare that a building that recent comes down, especially a building that was such a major design and that got so much publicity when it opened for its design — mostly very positive. the building is so solid looking on the street, and then it becomes a disposable artifact. it’s unusual and it’s tragic because it’s a notable work of 21st century architecture by noteworthy architects who haven’t done that much work in the city, and it’s a beautiful work with the look of a handcrafted facade,‘  says director of columbia university’s historic preservation program andrew s. dolkart. 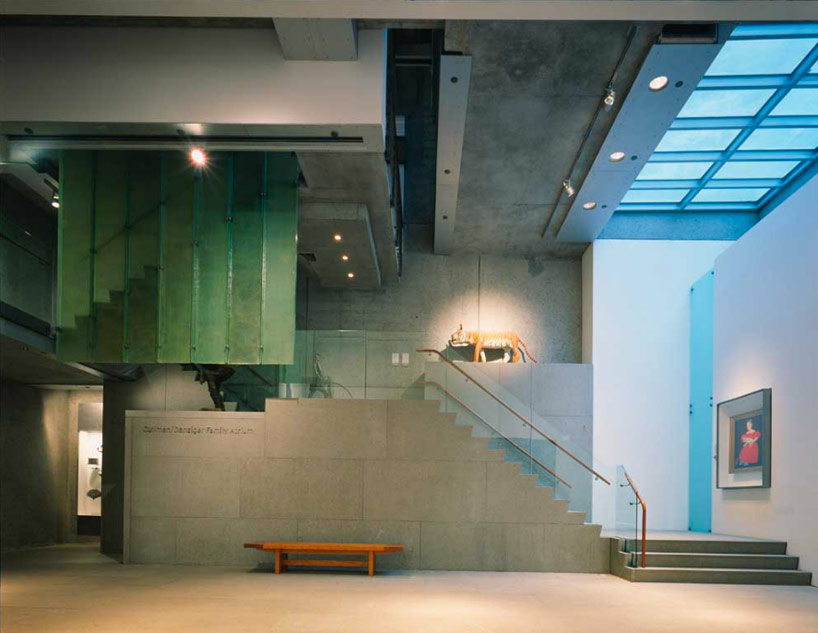 in order for the building to be completed in the first place back in 2001, the developers were forced to borrow 32 million USD. this was a cost which proved to be too burdensome for the modest museum, so the owners sold it to MoMa and moved to another location to help alleviate the debt. now thatthe museum is in MoMa’s hands, they are left with a structure that doesn’t necessarily fit the campus’s glass aesthetic and whose floors don’t line upwith the existing surrounding structures.

‘it’s not a comment on the quality of the building or tod and billie’s architecture,’ says MoMa’s director glenn d. lowry, who personally visited the architects’studio to communicate the museum’s decision. the lot is the perfect amount of space needed to complete MoMa’s five-building complex, and will connect to a new 82-storey tower designed by acclaimed french architect jean nouvel. the museum will eventually gain 10,000 square feet of gallery space at thefolk art’s site, and an additional 40,000 with nouvel’s tower. although the decisions all around seem to be devoid of any purposeful malice towards the architects, more based on practical economical needs, one can’t help but feel an unfortunate loss for the world of architecture.

‘we feel really disappointed. there are of course the personal feelings — your buildings are like your children, and this is a particular, for us, beloved small child. but there is also the feeling that it’s a kind of loss for architecture, because it’s a special building, a kind of small building that’s crafted, that’s particular and thoughtful at a time when so many buildings are about bigness.’

if you would like to take part in the petition to save the folk art museum, click here.