3D printing construction company apis cor has completed the first ever on-site printed house in russia. the project was realized using the company’s mobile construction 3D printer — the first of its kind — to print and construct the 38 meter squared building completely on-site. 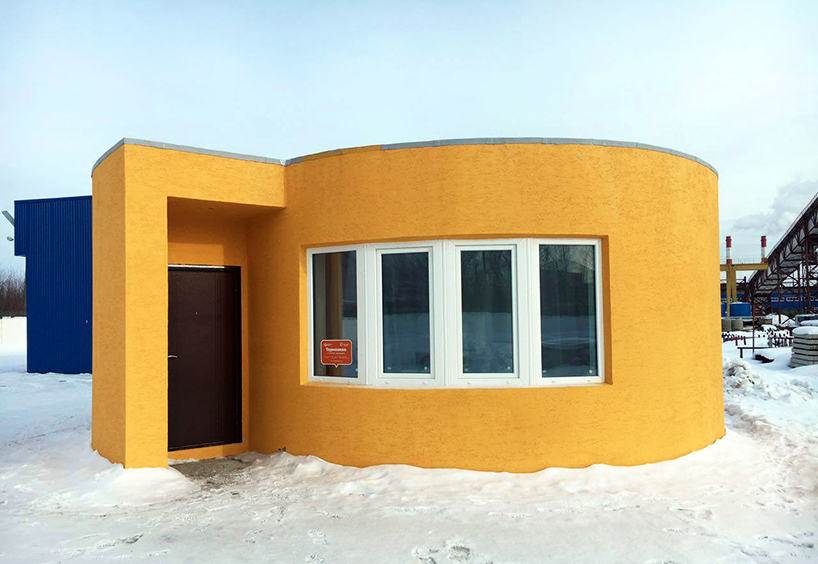 the house was constructed at the coldest time of year

the project was a collaboration between apis cor and PIK companies group, a leading russian public developer. the printing of self-bearing walls, partitions and building envelope was completed in less than a day — the pure machine time of printing amounted to just 24 hours. the design of the house is somewhat unconventional: arranged into a roughly circular shape, right angle protrusions create a floor plan similar to a rotor in appearance.

the mobile 3D construction printer is the first of its kind

shaped like a tower crane, apis cor’s mobile 3D printer is capable of constructing the building both from within and without. its small size makes it easily transportable, and its accuracy come close to completely eliminating the risk of human error. located in stupino town in the moscow region, building took place at the coldest time of year. because a concrete mixture was being used as the ‘ink’, a protective tent had to be constructed around the site to keep temperatures up.

the roof of the printed house is flat, but  its high durability makes it capable of withstanding heavy snow loads. the roofing carpet was created using LOGICROOF polymer membranes, welded together using hot air. solid plates of LOGICPIR hard polystyrene were used as an insulating layer. as a result of its low thermal conductivity, the thickness and total weight of the roof system is much smaller than traditional insulation materials.

the roof the home is flat, but capable of withstanding high snow loads

rock wool ROKLIGHT thermo-acoustic insulating material was used as overlap insulation. specifically for this project, insulation company techNICOL employed two different methods of keeping in heat: solid insulating material LOGICPIR for one part of the house and liquid polyurethane composition for the other. thanks to the properties of these materials, only a small layer was needed to create a comfortable micro-climate in the residence, greatly simplifying the structure.

solid insulating material was used for one part of the house, and liquid polyurethane for the other

the walls were then finished with a mineral decorative plaster — composed of white cement and marble and granite crumbs — that acts as a top layer of thermal insulation. in total the building cost 10,134 USD to construct, approximately 275 USD per square meters. ‘now we can say with confidence that with apis cor solution, the construction 3D printing has leaped to a new evolutionary stage’, says the company on their website. ‘the apis cor company and its partners are confident that the house in stupino was the first step that can convince the world that 3D technology in the construction market is a reality’.

in total the building cost 10,134 USD to construct, approximately 275 USD per square meters

the walls are then finished with a mineral decorative plaster

internal appliances were supplied by samsung, who assisted with the project 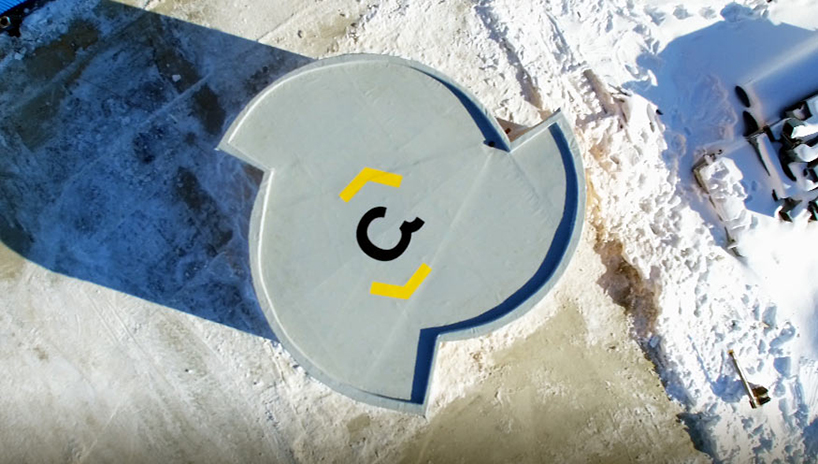 apis cor project that in the future, construction and insulation can be completed in tandem