apostrophy’s housing unit responds to living in the city today

apostrophy’s explores today’s standards of ‘living in the city‘–the various issues of space constraints, accessibility and sustainability–by realizing a housing unit that addresses these subjects. the prototype which measures 97 square meters, is a multi-purpose space that is composed of two main floors, two mezzanines and a green area.

the first level has been designed to accommodate the elderly or disabled individuals who may have difficulties using stairs. it is equipped with a ramp, while the dining and kitchen has been constructed keeping in mind the possibility that an inhabitant may use a wheelchair. from the living room, a ‘floating area’ can be seen above which can be transformed into storage or seating depending on the owner’s needs. one of he exterior walls has been envisioned as a living green wall, both garnishing the interior with plants, as well as providing a place where other vegetation, such as small herbs, can be grown. 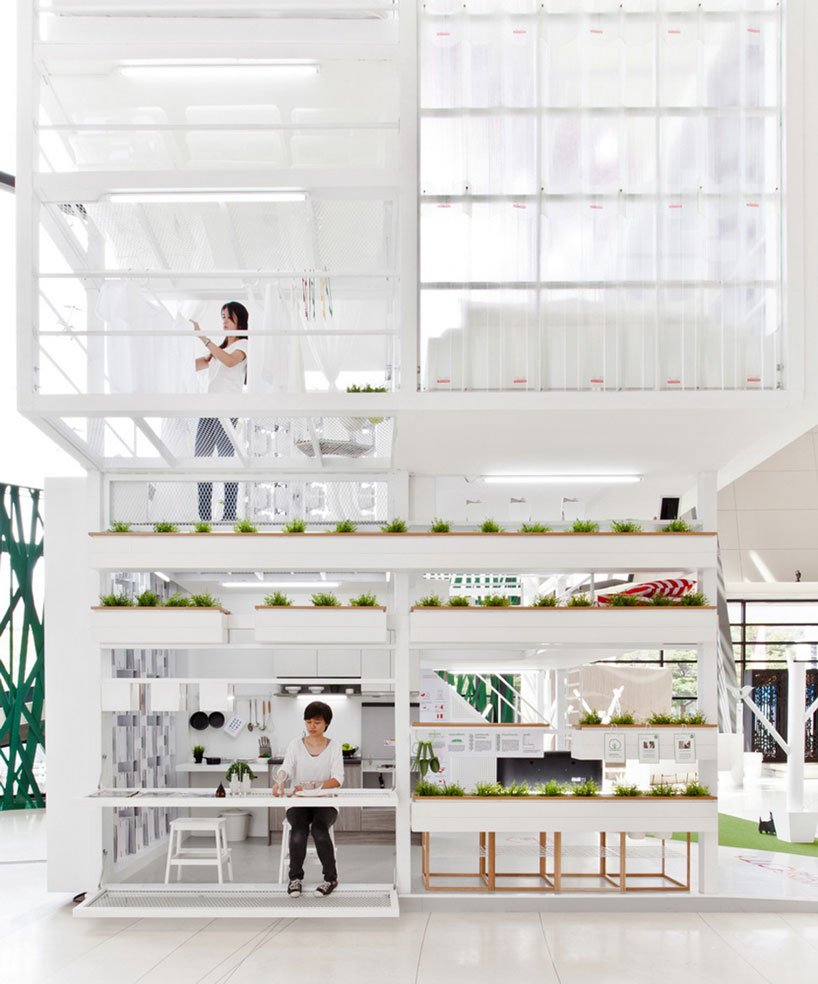 the second floor has been designed as an open loft that doesn’t have a dedicated function. another vertical garden which also offers a place for hanging objects, is accompanied by multi-functional furniture, adapting accordingly to what the space is being used for.

the mezzanine has been realized for working and can be modified into either a living or dressing room, with a built in wardrobe for extra storage. the main function of this level is the master bedroom which connects the previously mentioned programs, all of which are separated by a sliding wall that merges with the central staircase that double-functions as a bookshelf. in addition, this floor merges with a smaller bedroom divided by a partition that can be transformed into a desk. the multi-purpose space offers a warm, comfortable atmosphere that offers efficiency and flexibility, two major themes which are often sought after in constrained, high-rise urban living. 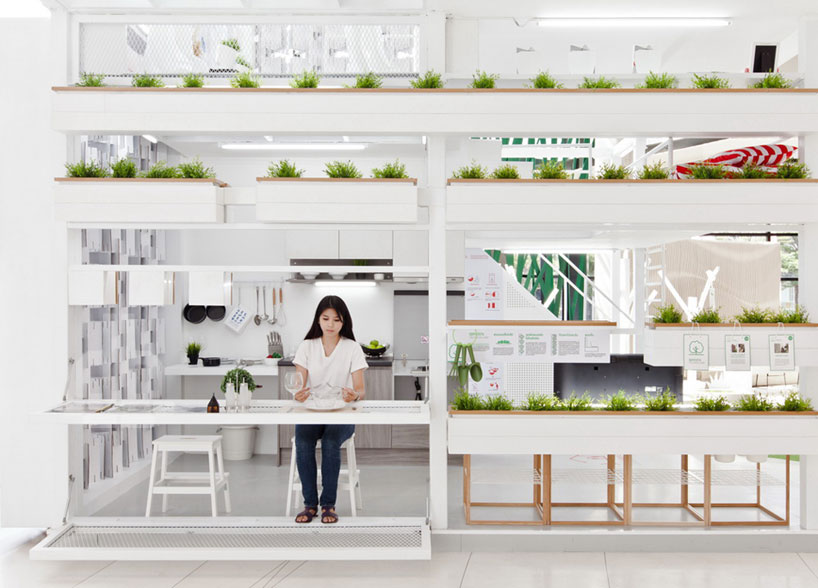 detail of the green wall and workstation 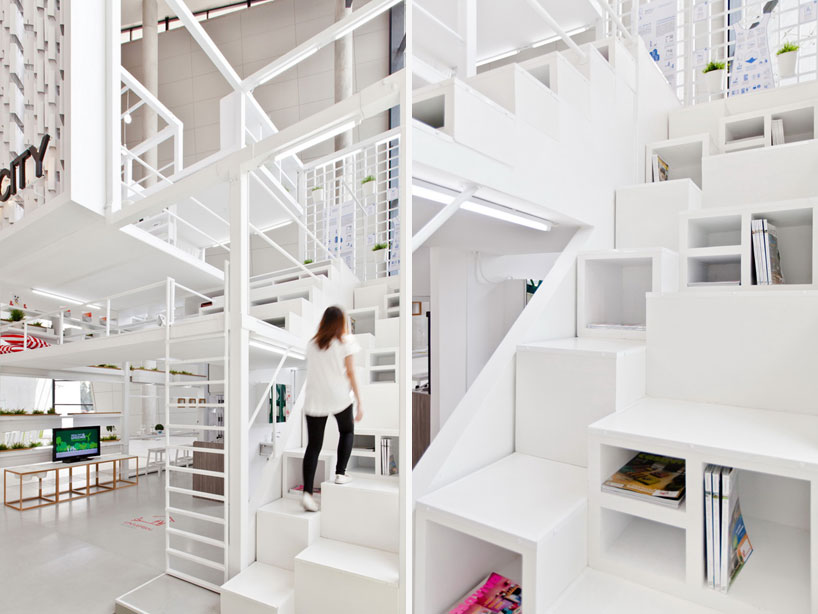 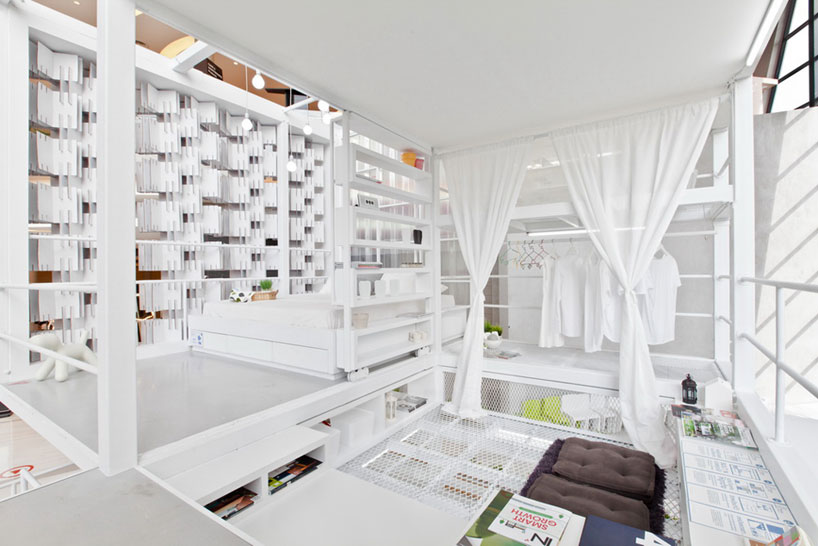 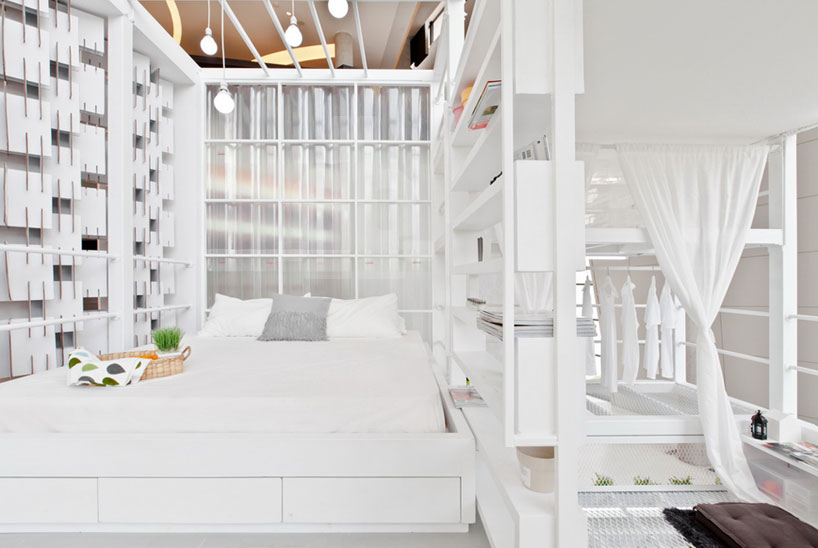 the main function of the mezzanine is the master bedroom 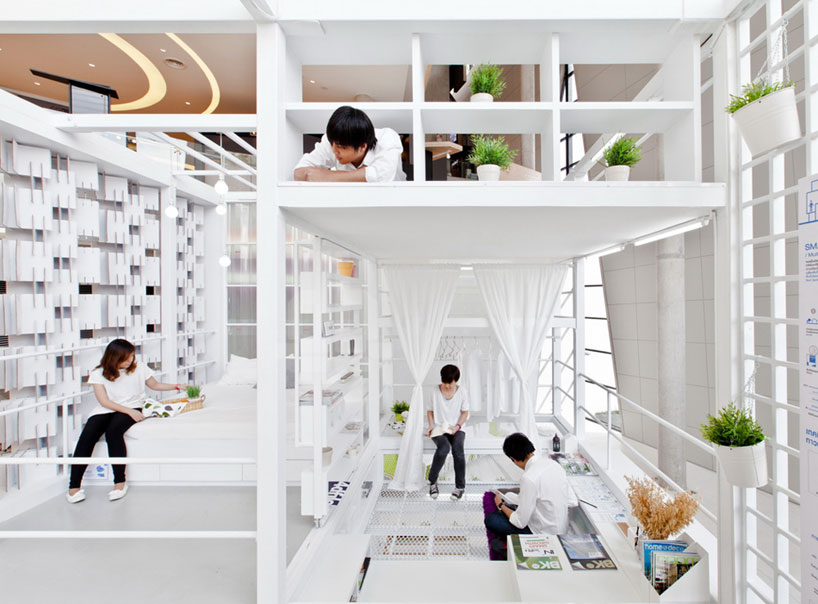 general view of the mezzanine and second floor

a sliding partition divides the floating area from the bedroom 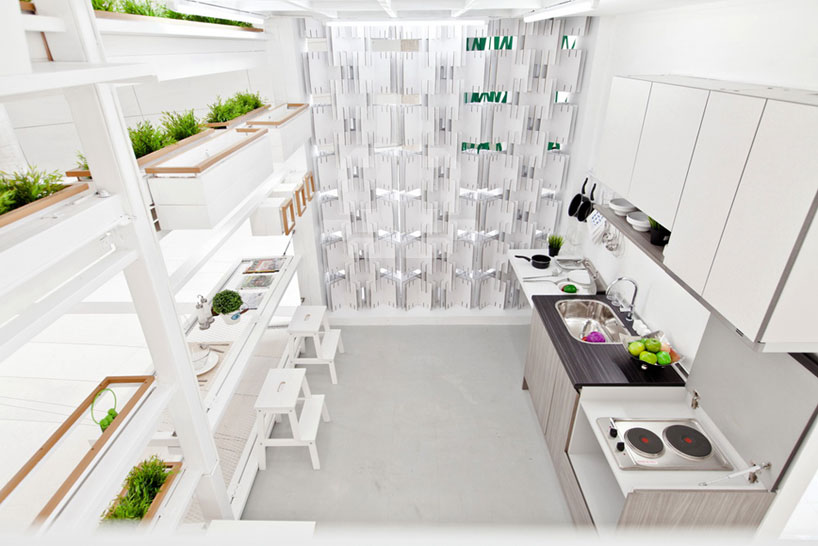 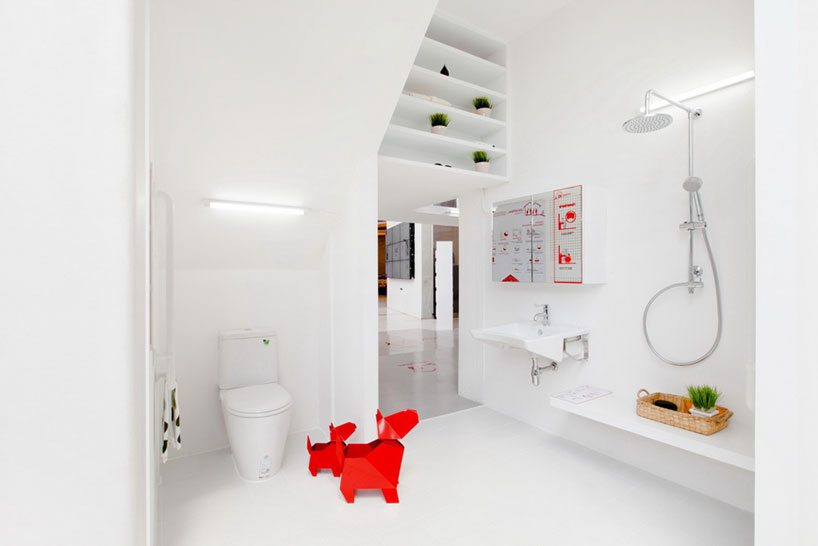 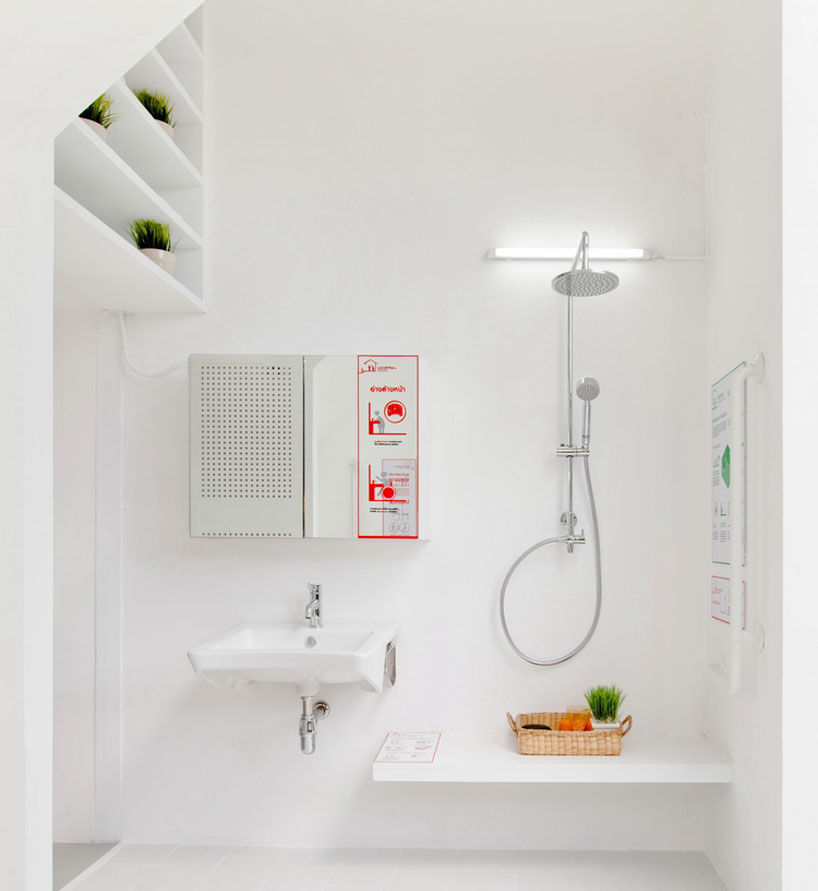 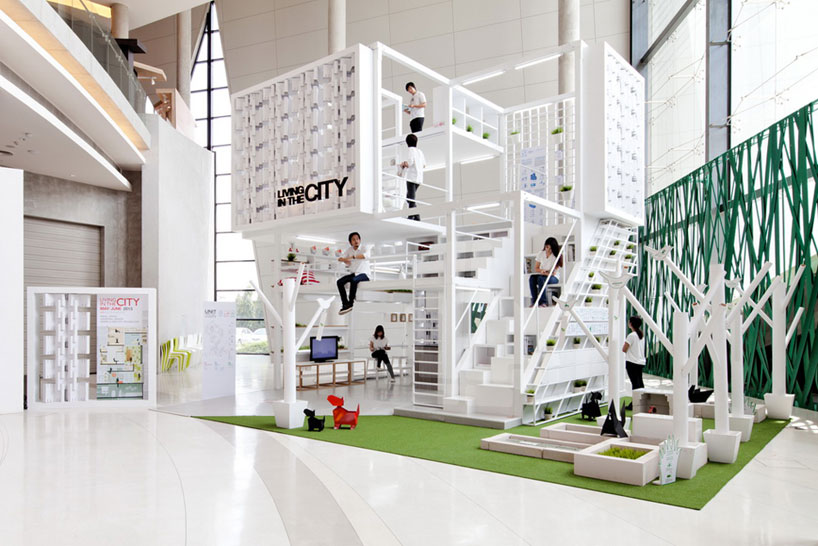 ‘living in the city’ housing prototype

full view of the living unit

a green wall garnishes the interior with plants

general view of the dining and kitchen area

the stairwell has built-in small storage for shoes, books, magazines...

the interior has been designed as a flexible living area

mezzanine area which has been designed with no particular function

top view of the transition areas and staircase

aerial view of the master bedroom

living in the city 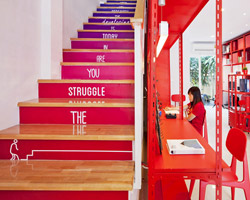 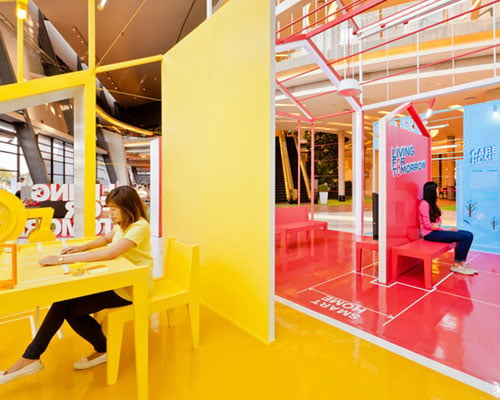 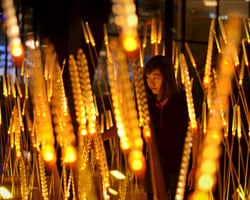 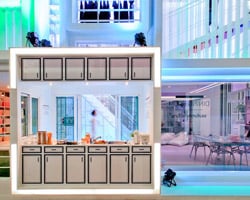 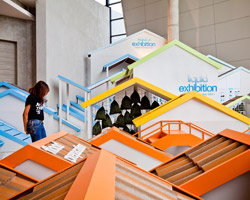