isla rhizolith / rhizolith island is a concept and prototyping project presented by APTUM architecture in collaboration with CEMEX research group and students from syracuse university. the project investigates the potential for floating concrete structures to revitalize colombian shorelines among urban areas vulnerable to ongoing flooding. in reaction to the continued destruction of mangrove forests that naturally protect sediment and shorelines from erosion, the proposal aims to redefine urban infrastructure through emphasis on newly developed concrete materials, formal expression and performance.

a rhizolith is a root system encased in mineral matter — created through processes of erosion and cementation — that protects and strengthens the natural composition of the earth. the rhizolith island proposed by APTUM architecture and CEMEX is a breakwater system comprised of ‘root-like’ concrete elements and planted mangroves that, when set floating upon the water, act as both an artificial and natural rhizolith. 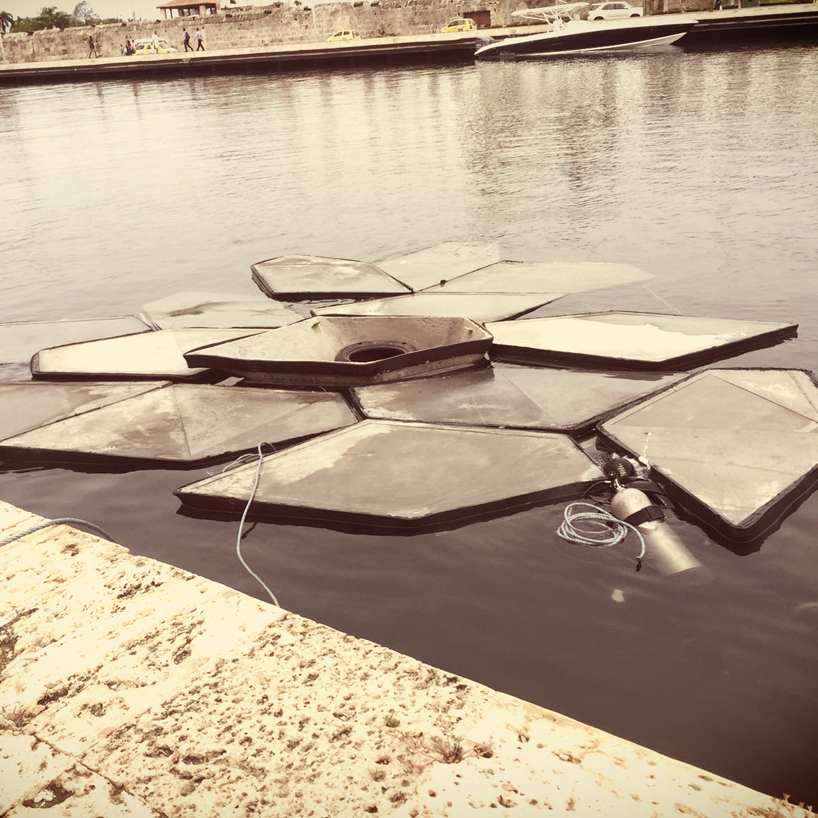 the proposed unit acts as both an artificial and natural rhizolith

once growing, the structure protects from flooding and acts as a seed for the revitalization and protection of new mangrove trees. continuous urban growth, agriculture, and storm surges all contribute to devastating amounts of vegetation and habitat loss, as well as annual flooding along the shoreline of colombia. the proposal reflects on the current state of our coastal cities but also on that which can be done to reverse these unfortunate consequences and create a safer, more resilient infrastructure through which our cities can thrive. 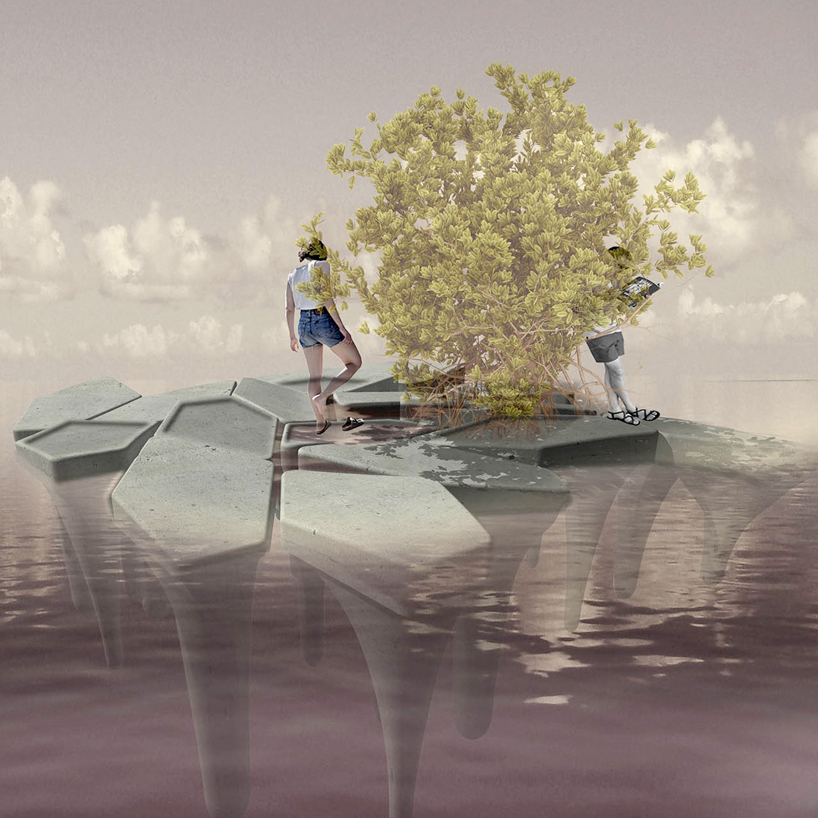 once growing, the structure protects from flooding and acts as a seed for the revitalization of mangroves

the elements are constructed out of two individual pieces; a ‘head’ and a ‘fin’, both made with proprietary concrete mixes and casting techniques. the head is made from a concrete mixture that is lighter than water, allowing it to float even if there are holes in the shell. in addition, the weaker mixture of the lightweight concrete allows the roots of the mangroves to grow through the concrete over time.

the ‘fin’, on the other hand, is made from UHPC (ultra high performance concrete). its weight and strength stabilizes the elements in the water and provides the basis for a marine habitat by offering shelter and surfaces for barnacles to grow. to protect the elements from each other, a rubber ring is cast into the top of the head. steel grommets embedded in the rubber allow the elements to be sewed together with rope into larger aggregations. 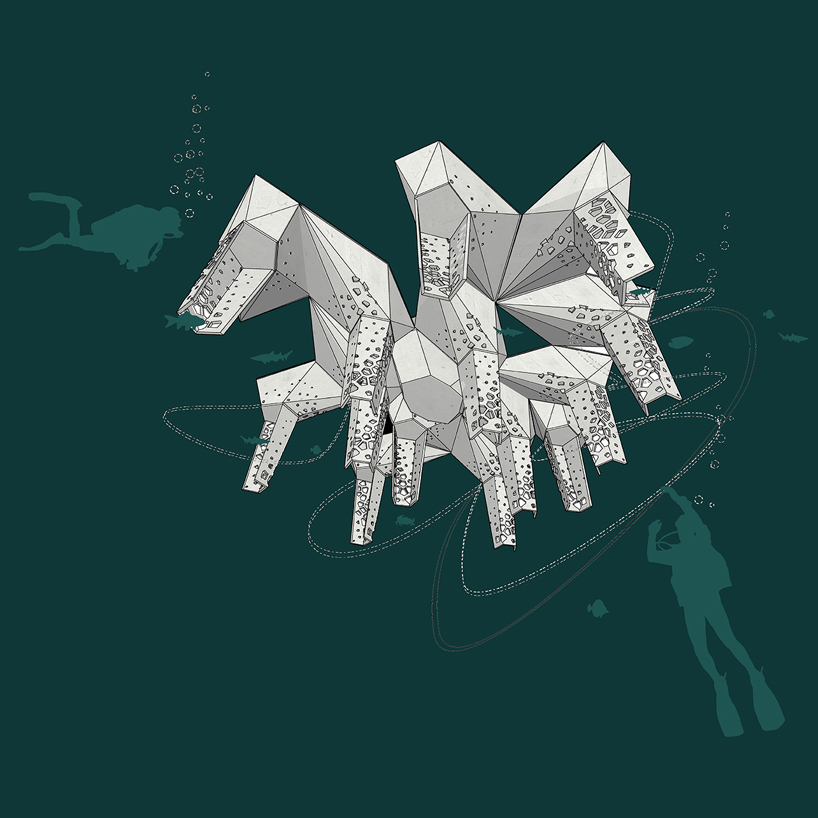 the rhizolith island is a fragment of a larger breakwater that can be deployed along the shoreline in an ‘acupuncture’ strategy in locations most affected by depleting mangroves and annual flooding. the porous concrete dissipates the force of the water during a storm surge. simultaneously, the element fins serve as stabilizers and create pockets of space with voids puncturing the surfaces to create inviting ecosystems, similar to leaf litter and decomposing debris, for flora and fauna to inhabit the structure. in the second phase, the mangroves continue to grow on the floating elements as well as on land, allowing for further growth of trees along the shoreline.

in the final phase, the floating elements eventually moor into the seabed to reduce additional erosion. this system establishes a local restoration and expansion of the mangrove forest. 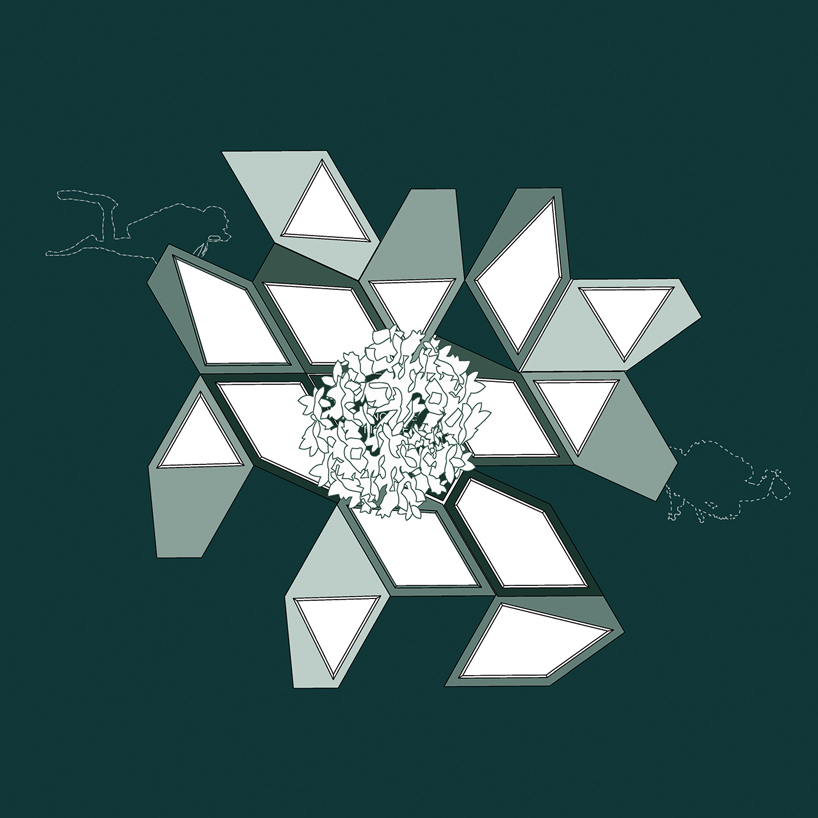 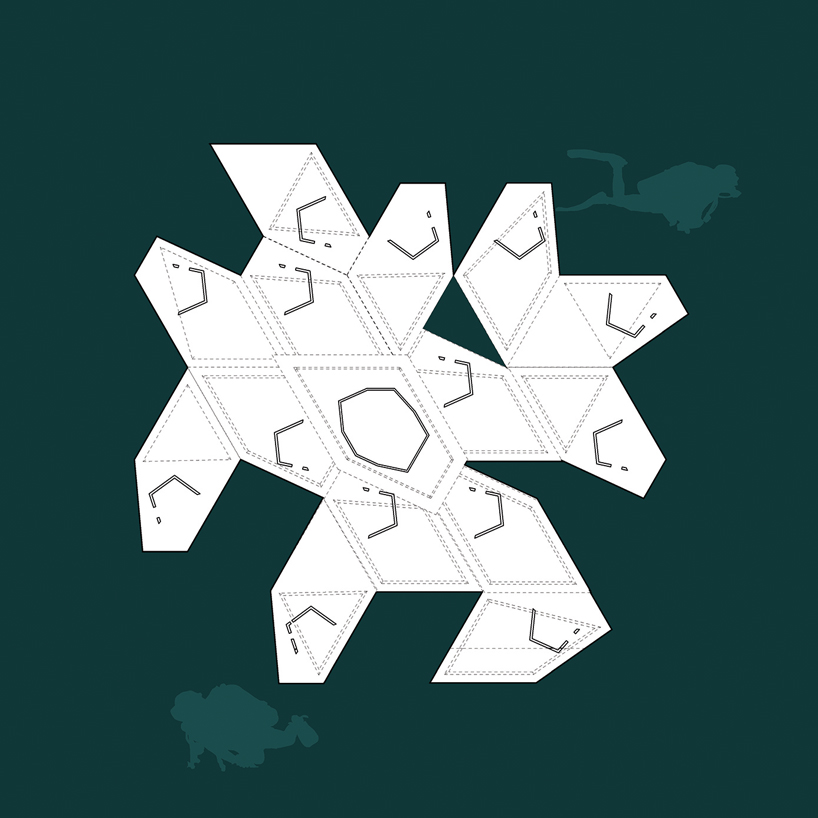 mangroves grow on the floating elements as well as on land, allowing for further growth of trees along the shoreline 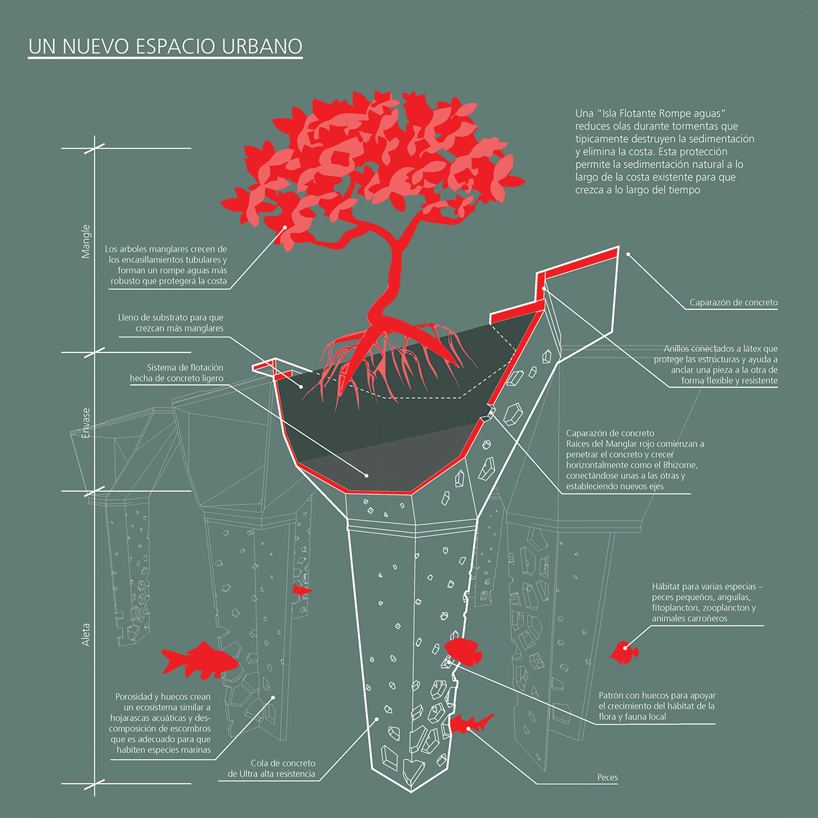 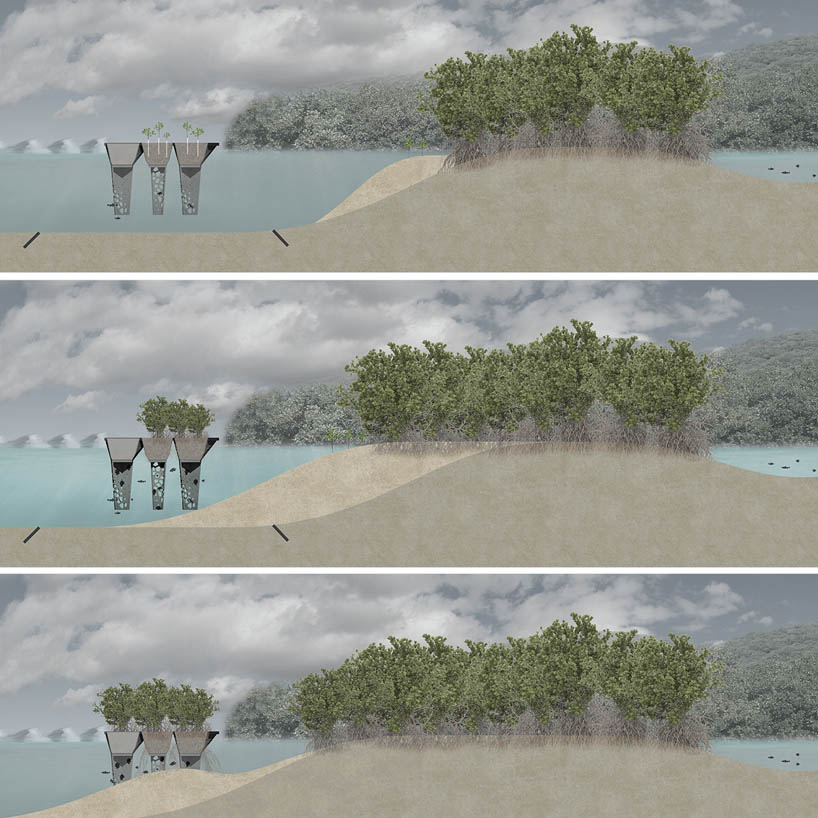 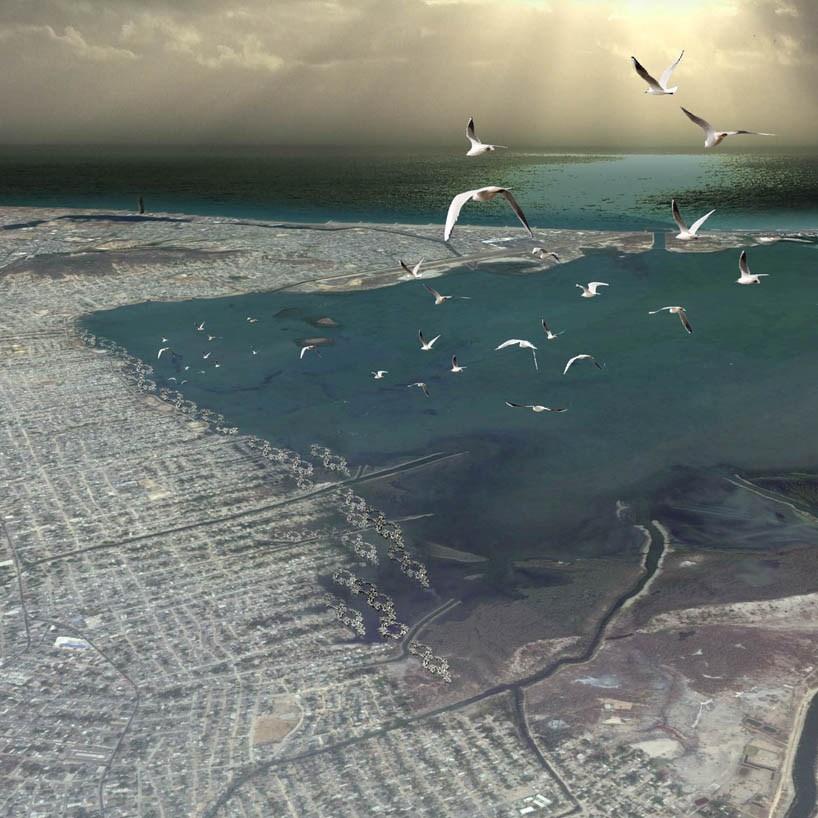 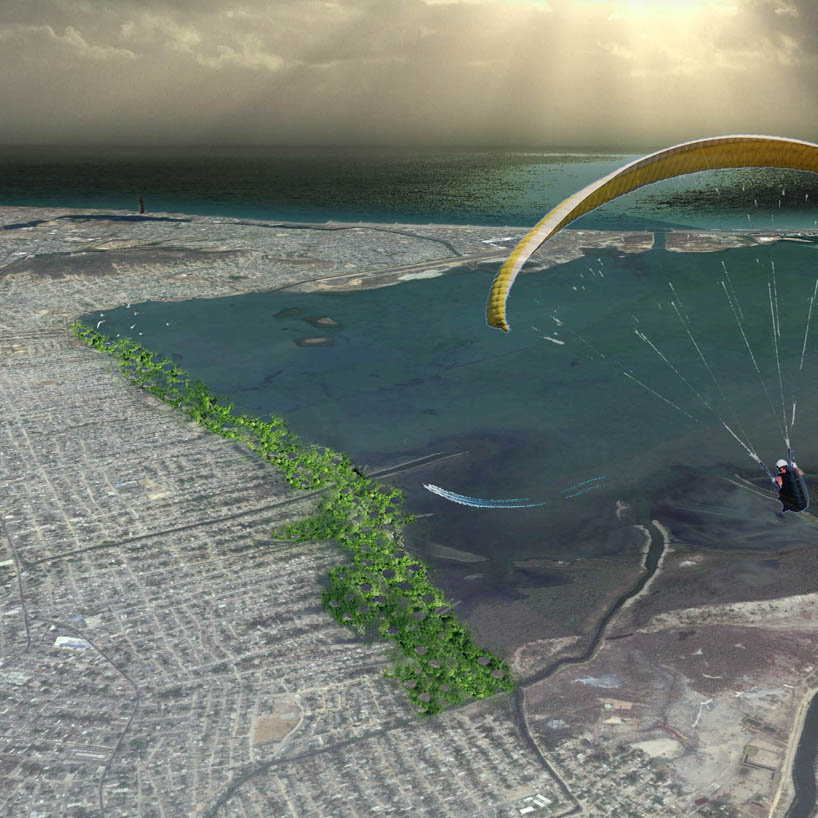 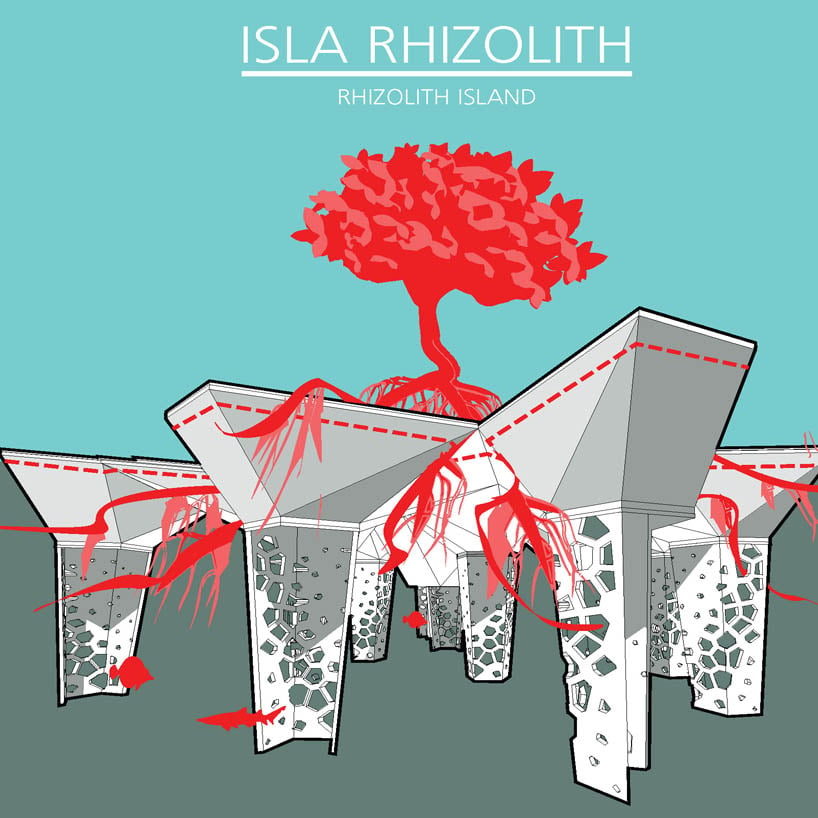 a promotional poster for the project