since it was first developed by buckminster fuller in the 20th century, the geodesic dome has gone on to fascinate architects and engineers alike. and now, pavel brayvo and nikolay zverev have created a new interpretation of the dome using curved laminated timber and steel connectors. called ‘arkDomes’, the first structure was installed in belgium as a pavilion for country events and weddings. during the COVID-19 pandemic, it turned into an ephemeral open-air restaurant that became relevant as a meeting place outside the city. 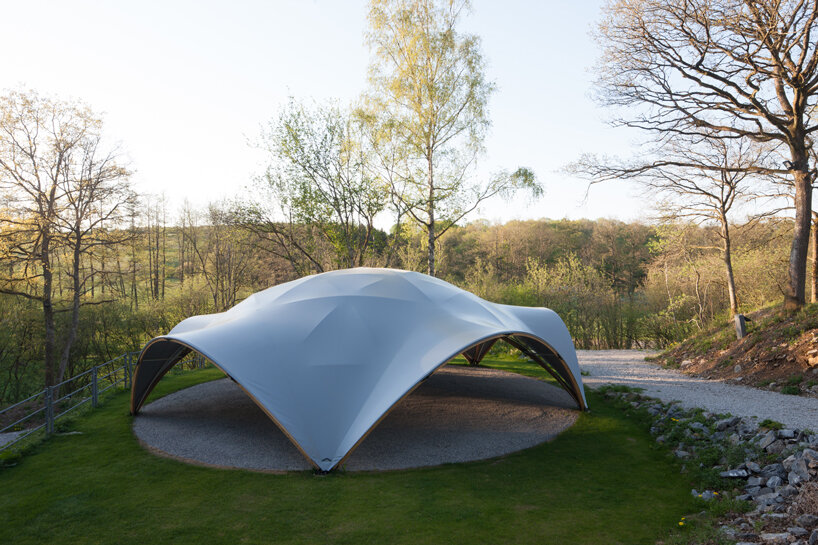 the main difference between the original geodesic dome and arkDomes is the use of curved structural elements instead of straight ones. the team implemented the principle of a fractal network of triangles projected onto a sphere. this gives the structure a smoother appearance if compared to its ‘classic’ version, which resembles more a faceted structure of a mineral. testing of the first prototype showed the increased stability of the arch-shaped load bearing system in relation to the frame made of straight rods. 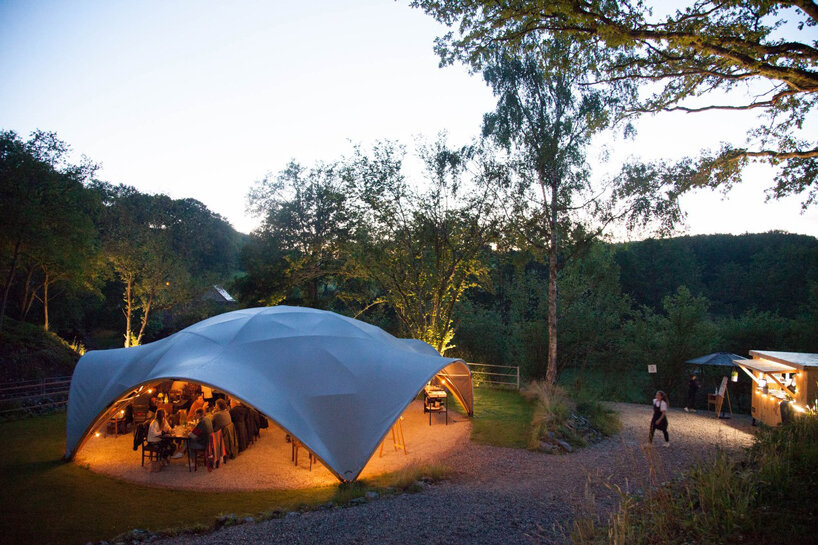 the backbone arches, or geodesic lines, on the sphere are arcs between the intersection points of great circles that form a network of triangles in a geodesic dome. in this design, the frame matches exactly the ideal geometric model. in this first model (with a diameter of 11 meters), the second sphere division frequency is supported by steel arcs that perform a triple function. they serve as the frame reinforcing element, stretch evenly the cover in the centers of the large triangles, and aesthetically complete the geometric composition. 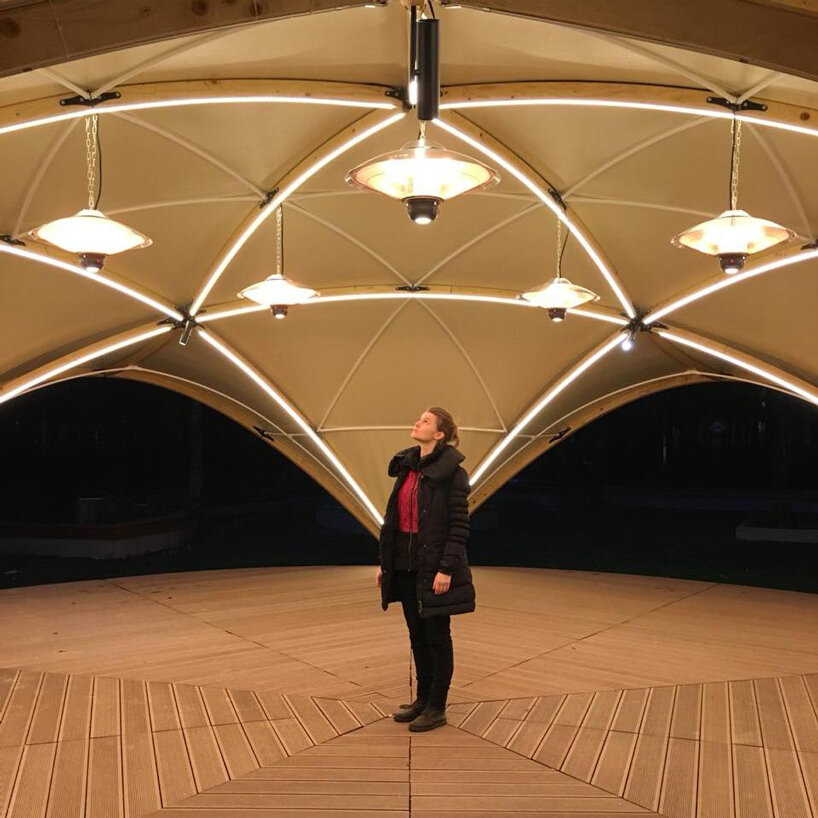 the arkdome’s frame is composed of wood and steel. the cover made of a high-resistance architectural PVC fabric supports the self-tensioning effect of the shell to fully stabilize the whole structure. the frame arches are milled with laminated veneer lumber (LVL) and connected with steel connectors. the whole structure is fixed to the base with five steel supports with adjustable parts that achieve perfect tension of the cover. 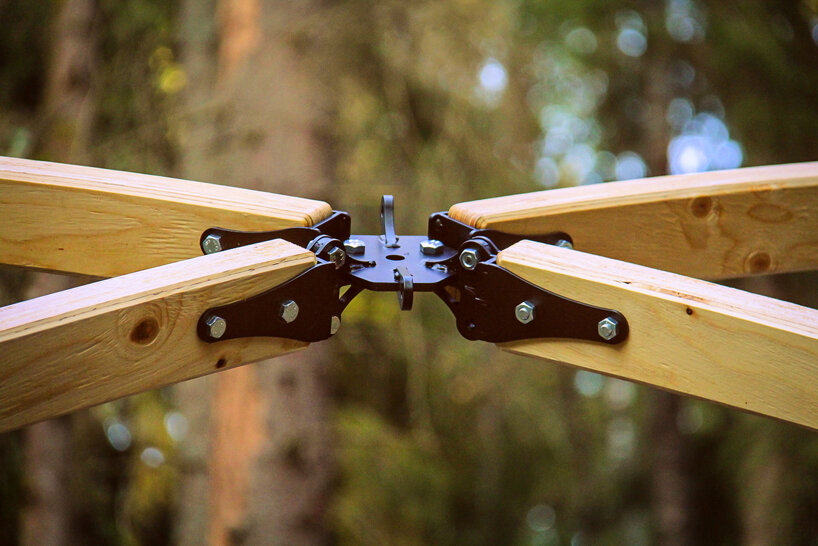 the main construction is accompanied by several elements – transparent curtains made of thermoplastic polyurethane (TPU) film hanging above on the entrances. rolled up they leave the entrances open. that creates a feeling that you are in a safe place but not isolated from the outer surroundings. panoramic glazing will work like minimal membrane insulation if you want to use the pavilion during the winter. it is also possible to install a wooden podium from a decking, heating, lighting and other systems, depending on the object tasks. 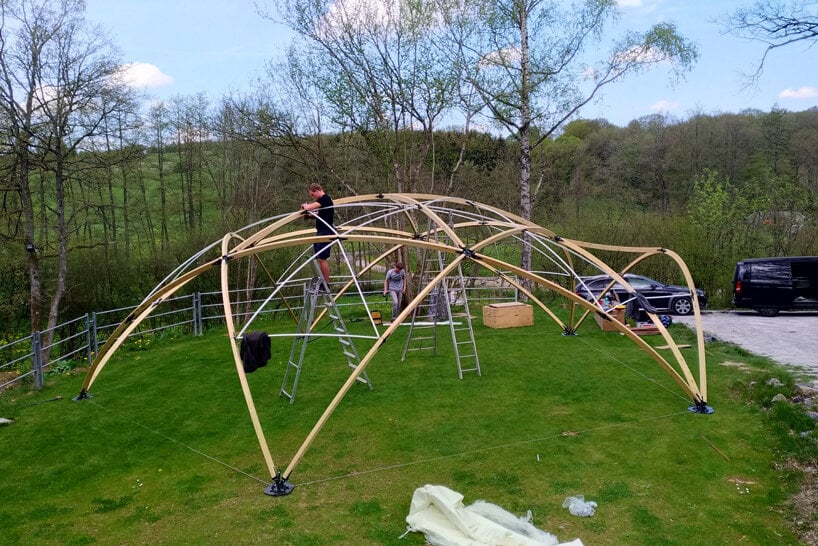 with different colored covers and various entrance solutions, arkDomes offers a range of potential uses. pavel brayvo and nikolay zverev hope that their design reflects a lighter form of architecture, one which is mobile, ephemeral, and brings people closer to nature. 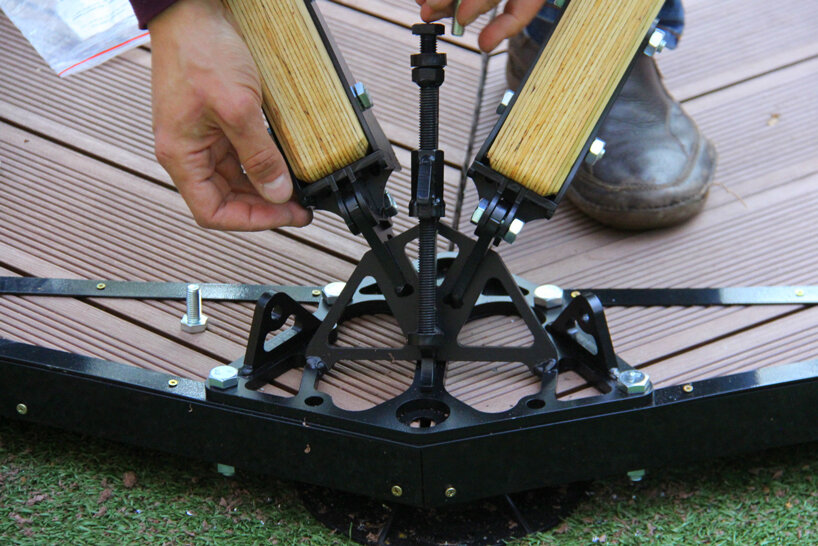 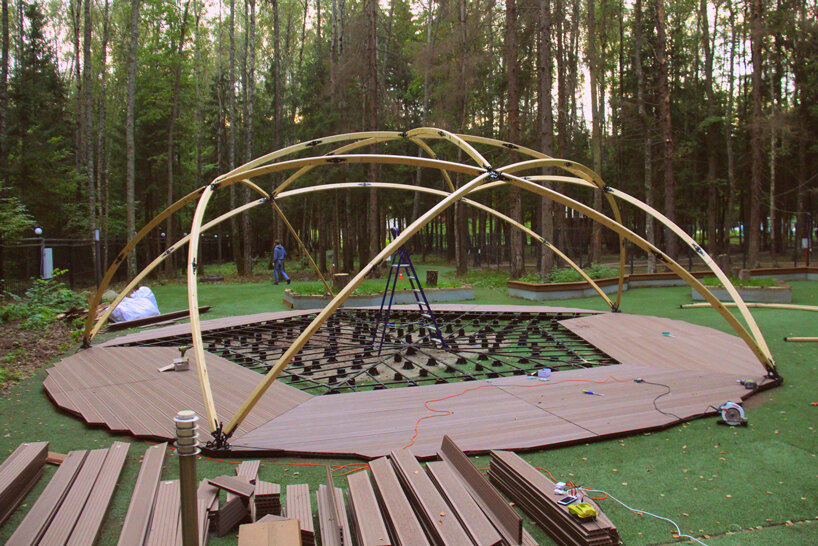 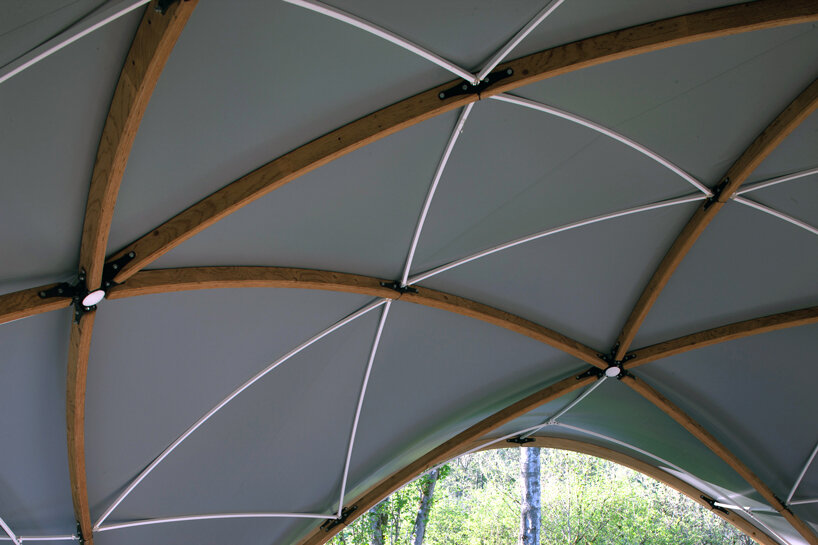 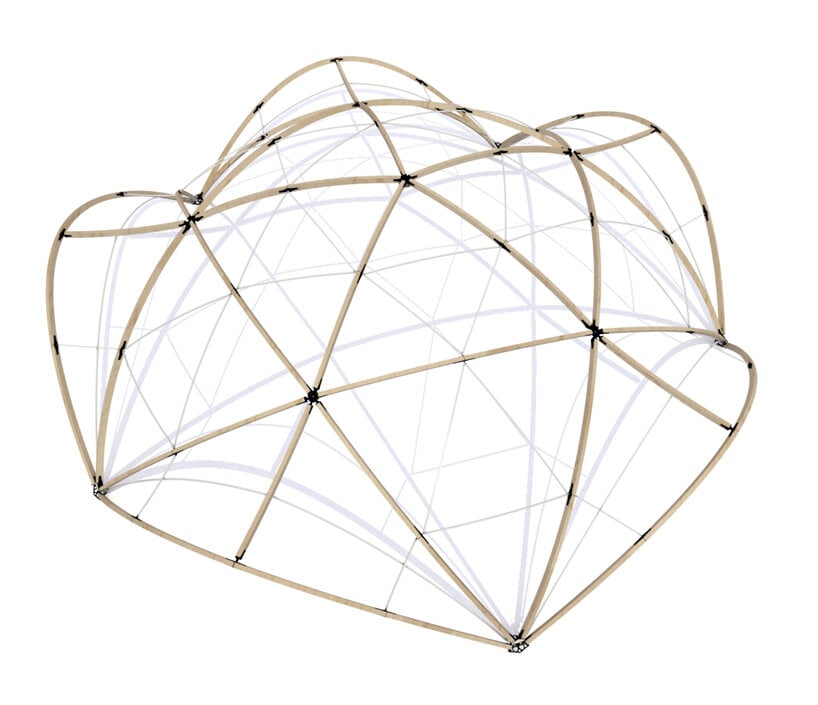 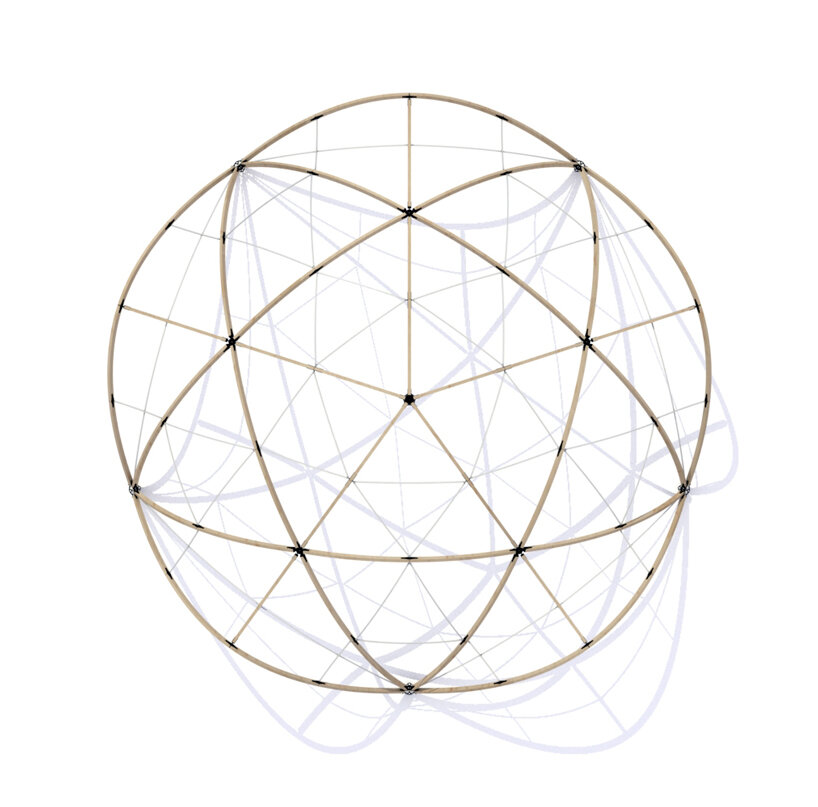 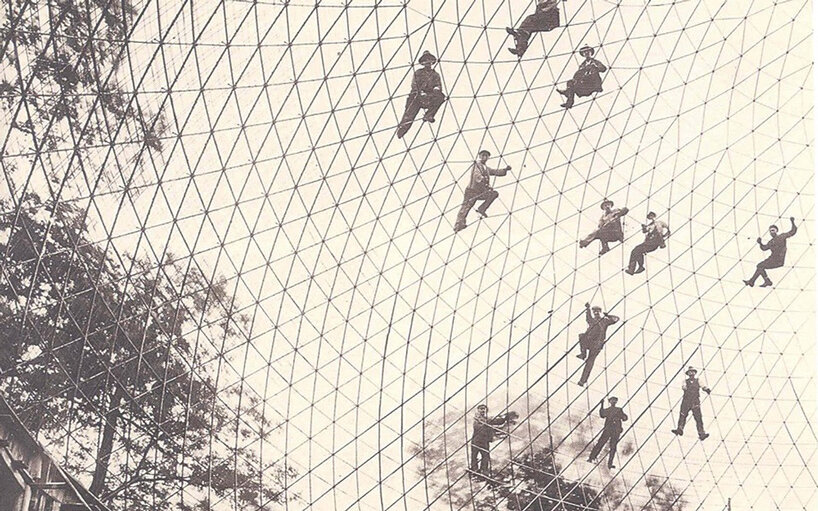 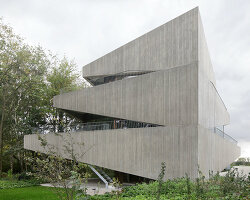 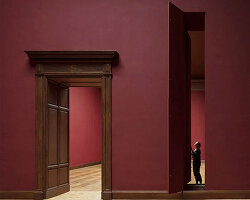 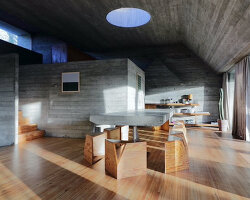 Apr 08, 2021
kiruna: the swedish town that is relocating building by building
'the difficult part in moving a city is to preserve its sense of belonging, the history and the soul of the community,' says alexandra hagen, CEO of white arkitekter.
architecture
318 shares
connections: +120