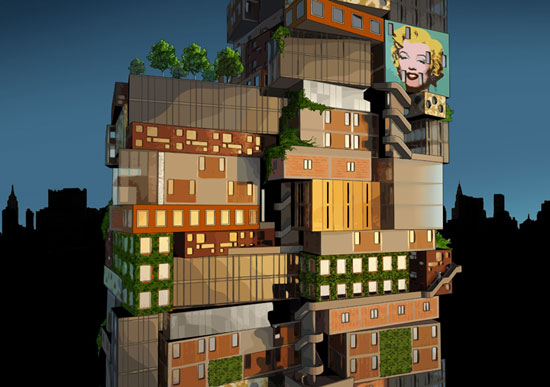 manhattan based firm axis mundi has unveiled a conceptual alternative design for MoMA tower. founder of the firm john beckmann sees this as the time to rethink the tall buildings that have become synonymous with new york city’s identity.

‘instead of disguising the rich potential of towers that have a mix of uses, we looked for a way to express that diversity,’ beckmann noted. the firm used parametric computer modeling software to test a wide range of possibilities. out of this iterative process they proposes a new way to organize and express tall buildings: the vertical neighborhood. 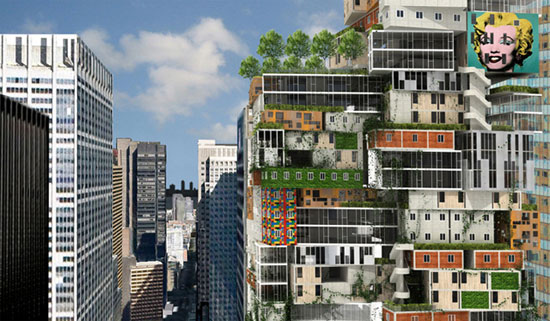 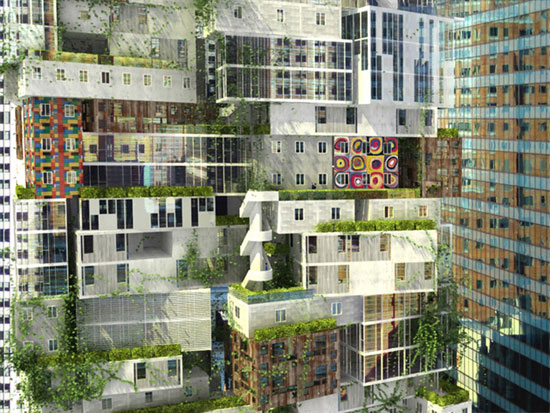 beckmann proposes a conceptual alternative to business-as-usual, choosing the site of the proposed 53w 53rd, among the city’s largest skyscraper proposals in one of the most overbuilt parts of midtown. hines, the developer, engaged paris architect jean nouvel, who designed an 82-story hotel and residential tower higher than the chrysler building. the site was purchased from the museum of modern art with the proviso that the project would house additional gallery space for the museum. 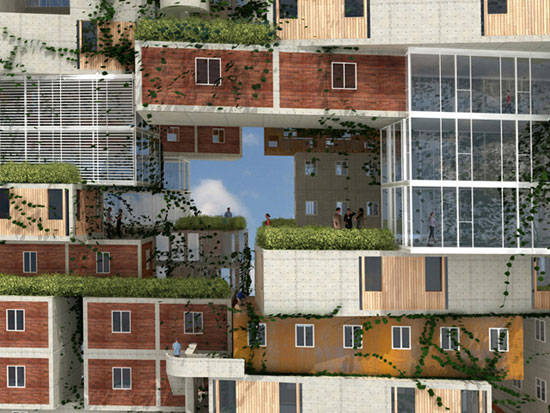 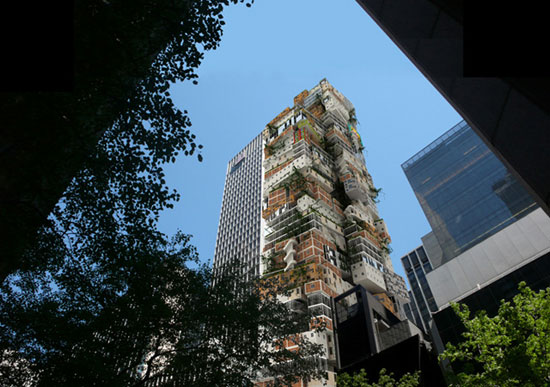 the architectural diversity starts with a double-ring, multi-level floor-plan unit, anchored by two cores that run the full height of the building, containing elevators, stairs and other vertical services.

the ring units called ‘smartblocks’ make possible a wide variety of floor plans. single-unit layouts can mix with duplex, or triplex layouts. the units can shift in and out, adding rich texture to the surface, creating vertical garden space, and linking the units in unique ways. the malleability of the ring units accommodates living and working, extended families, and new forms of tenancy and ownership. any grouping of these could be purposed for a hotel. the building is enriched by the multiplicity of forms and textures people create within their vertical neighborhoods. 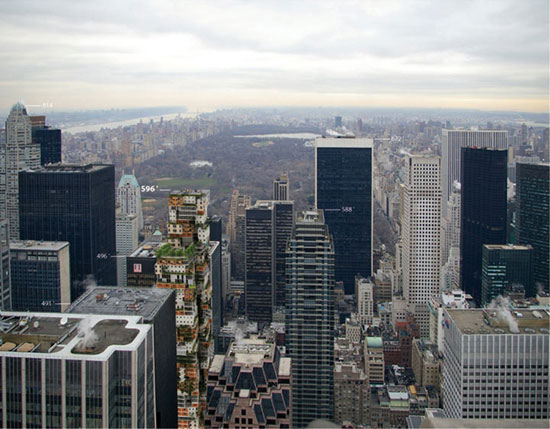 
by varying the mix of the floor plan units, the axis mundi design leaves space for vertical fissures that move irregularly up the tower. these bring light and breezes into the open centers of the double-ring units and frame spectacular, theatrical vistas to the city through the building’s own structure. neighbors can see and greet each other along spacious bridges and balconies rather than scurry by each other in long, dark hallways. 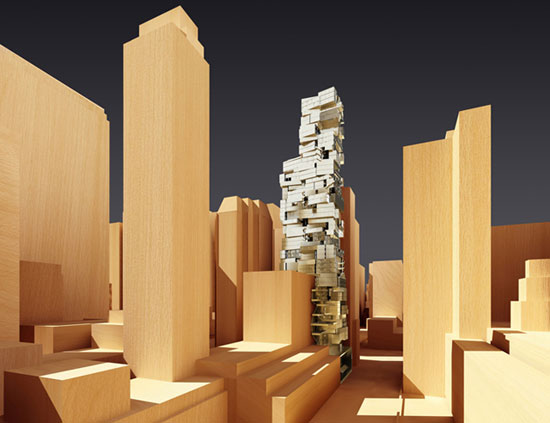 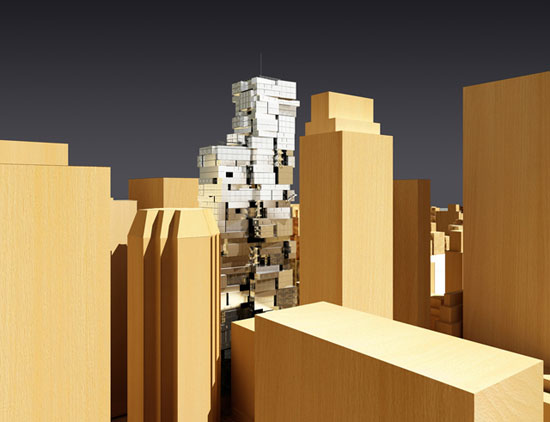 ‘historically, the skyscraper was a unitary, homogeneous form that reflected the generic, flexible office space it contained,’ beckmann says. ‘the vertical neighborhood is more organic and more flexible–an assemblage of disparate architectural languages. it reflects an emerging reality for tall buildings as collections of domestic elements: dwellings, neighborhoods, streets.’

axis mundi has conceived the tower at a scale akin to, rather than dramatically exceeding, the heights of this very densely built-up midtown neighborhood. the richly modeled surface and the fissures of space help to reduce the structure’s apparent scale and join it more seamlessly to a neighborhood that mixes offices and residential towers, brownstones, apartment buildings, hotels, and clubs.

a dramatic through-block public arcade connects w. 53rd and w. 54th streets, offering access to new moma galleries on up to three levels above. contiguous with the museums’existing exhibit space, the galleries twine back on themselves, like a möbius strip.

above that, axis mundi sets aside a three-story-high volume that can be developed as a community gathering space. their proposal seeks to inform the discussion of it and other tall buildings. 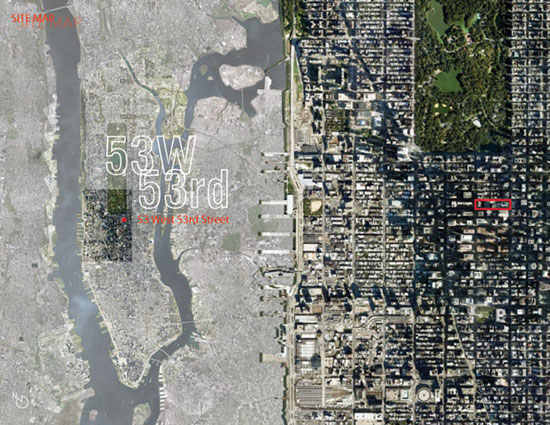 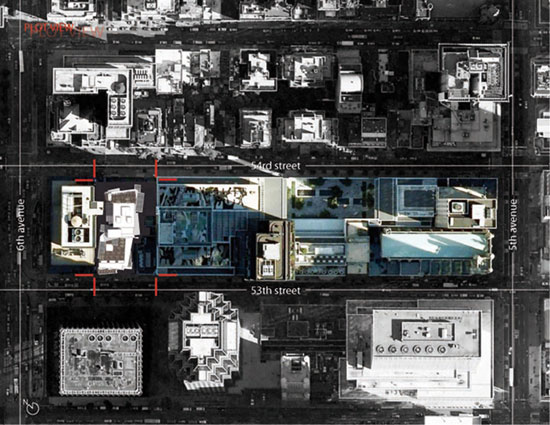 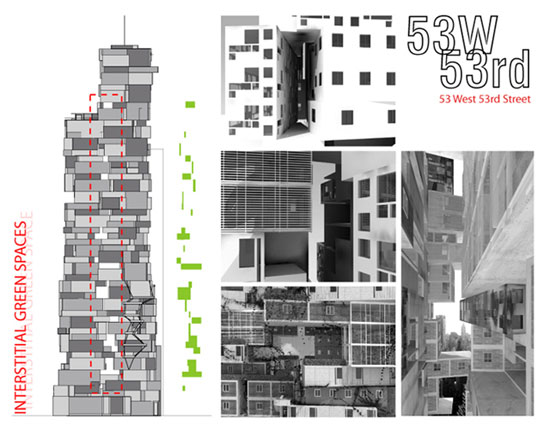 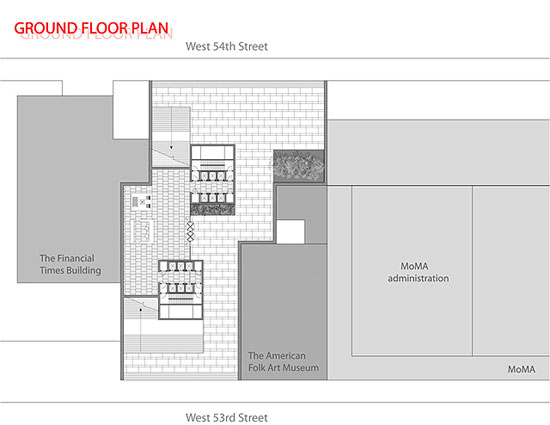 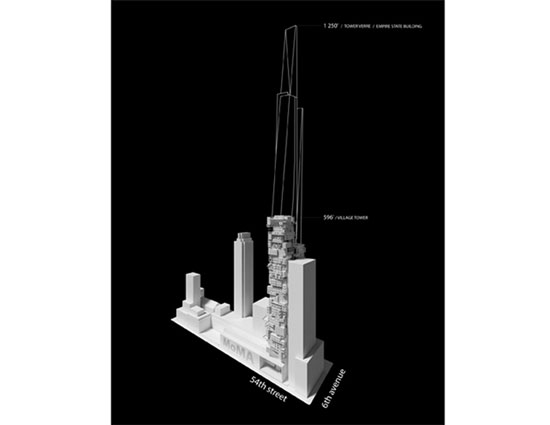 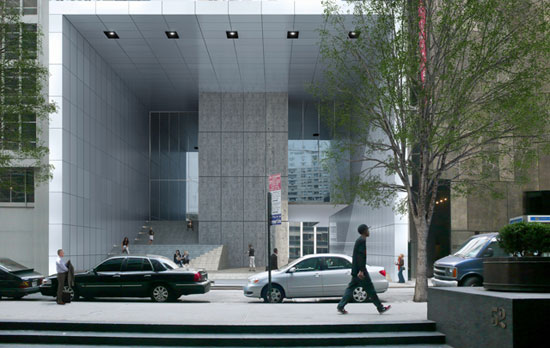 Aug 09, 2022
living in THE LINE: explore daily life in saudi arabia's future vertical city
in an exclusive interview with NEOM's urban planning director tarek qaddumi, designboom discovers what life will be like in THE LINE.
architecture
198 shares
connections: +360