the project addresses the issue of US settlement systems whereby many relationships are broken due the lack of social places where new immigrants can meet and share thoughts. ‘skyscraper table’ seeks to provide a space where relations between settling groups and families can be enriched through a common meeting place. 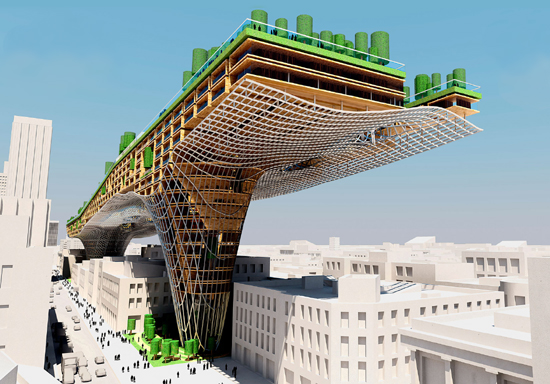 the structure has two load bearing structures. the first is located on the ground, while the second is in the sky. the body of the building is situated between them and consists of flexibly connected cells.

the interior of the ‘sky table’ consists of inexpensive housing, offices, commercial spaces, vertical communication lifts and stairs. public spaces are found both amongst the cells and the platforms of the building. 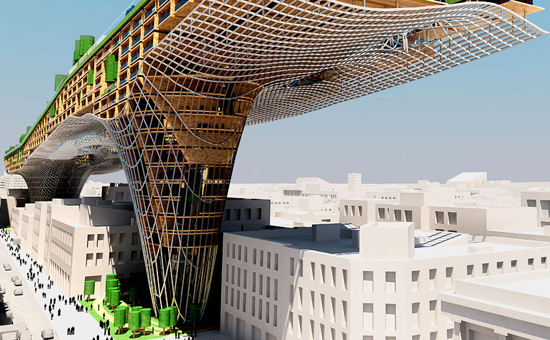 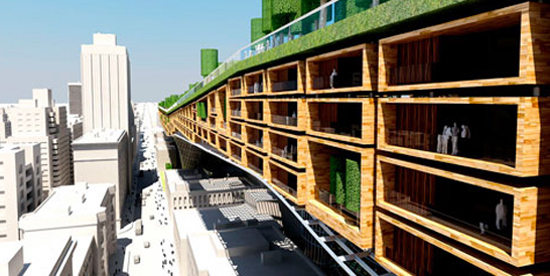 energy to sustain the building is created in three ways. one approach is through an underground system where energy is accumulated via gas tanks. this setup involves the use of pillars which go through the ground level and are placed on the underground concrete parking box. this box, in turn, is situated on the system of underground gas tanks. rotting waste products acquired from the building’s inhabitants are used with special bacterial colonies as the main source of the collected gas.

the second source of energy is wind. the building itself is able to make wind streams move in a certain direction. wind intensity is increased by the building by placing heat conducting paths outside the gas tanks. in doing this, any superfluous warmth of the gas tank is also removed. this systems is used for turning air flow to wind turbines.

the third way uses construction ripples whereby special devices that translate ripple movements into electro energy are embedded in different parts of the building where vibrations may be stronger.

energy conservation was also a key component of the proposed design. solar energy is collected using lenses which act as light gathering devices. the collected rays become accessible to users via a glass optical fiber. the ventilation of the building is dealt with by collecting wind entering into the building into a single duct. all of the building interior is ventilated via this duct, rendering it unnecessary to install air conditioning units.

a view of the apartments from the inside