french architecture practice atelier zündel cristea (AZC) has completed a residential building in paris that provides housing for frail, elderly residents with a variety of disabilities. the structure comprises individual studio apartments, communal areas and medical consultation rooms for residents and out-patients. the complex site is surrounded by tall buildings that cast long shadows, and is bordered on two sides by a corner house whose owner refused to sell the plot. to the north, the building ascends to a total of six storeys, while the south rises to three levels. 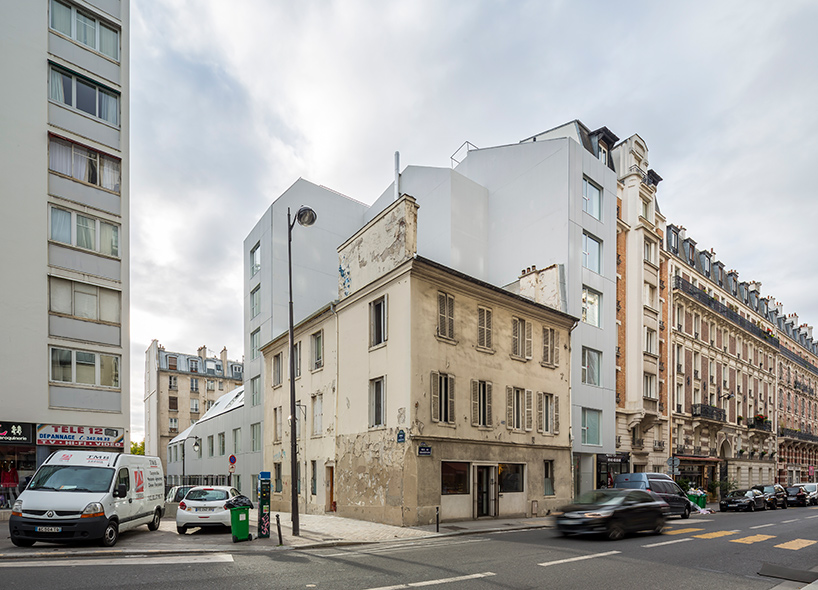 urban restrictions combined with the brief’s requirements led the architects to consider the most efficient means of squeezing in the allocated 2,150 square meters of program. the resulting volume slips between the existing buildings. on the rue de charenton, the generous height allowances and the shape of the site results in spaces of surprising proportions, which fold along the roofline. on the ruelle de la planchette, the upper part of the aligning façade folds in, following the volumes permitted. generously proportioned windows, provide a maximum of daylight and transparency. 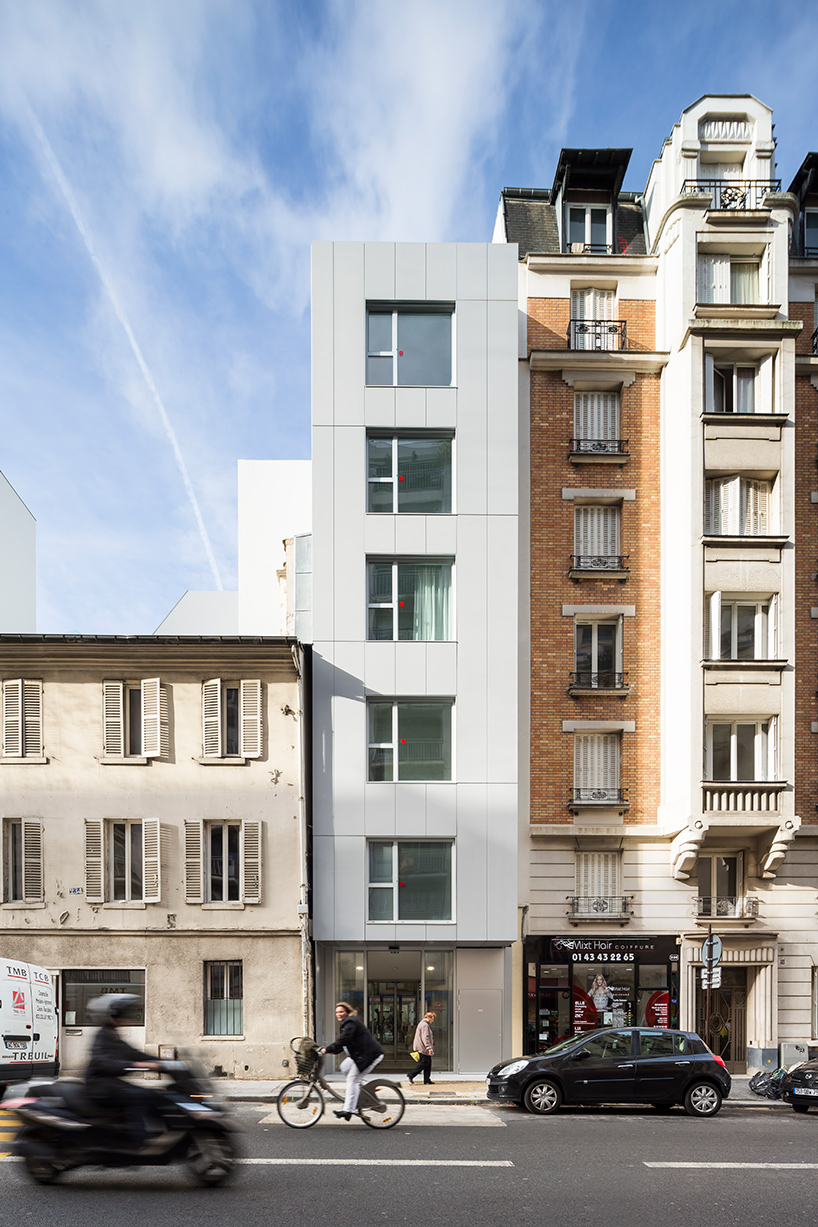 to the north, the building ascends to a total of six storeys

the day-rooms are arranged around two patios — their proportions reconsidered in order to meet building regulations, as well as requirements for natural lighting. all the rooms are naturally lit, as are the circulation spaces. ‘in both the design and its realization, we opted for a building that is sober and adaptable, conceived in terms of real-life usage over the long term,’ explains AZC. ‘we took into account the possibility of future extension in the event of acquiring the corner house. in considering the ensemble of issues with regards to health and thermal and acoustic comfort, we gave great importance to user needs.’ 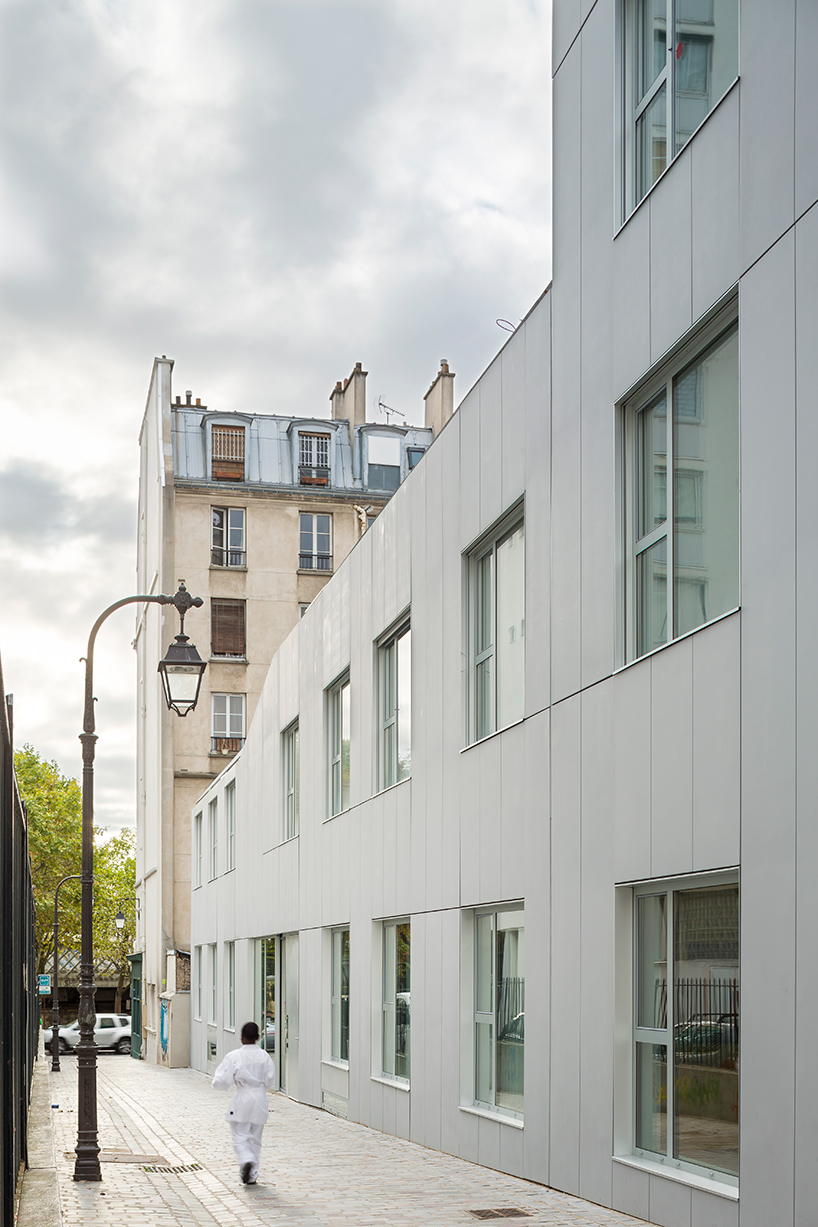 the built volume slips between the existing structures surrounding the site

large windows create a relationship between internal space, and the city and neighborhood beyond. a further consideration concerned opportunities for interaction within the building. ‘we strove for transparency at the heart of the site, for the quality of the communal and circulation spaces, which are designed as largely glazed walkways providing opportunities for residents to see, meet and interact with one another,’ says the design team. ‘these circulation spaces are a determining factor in the quality of life in shared accommodation.’ the building houses several different functions, as well as the private living units – communal areas, easily accessible spaces for activity and leisure, and work areas for the staff. 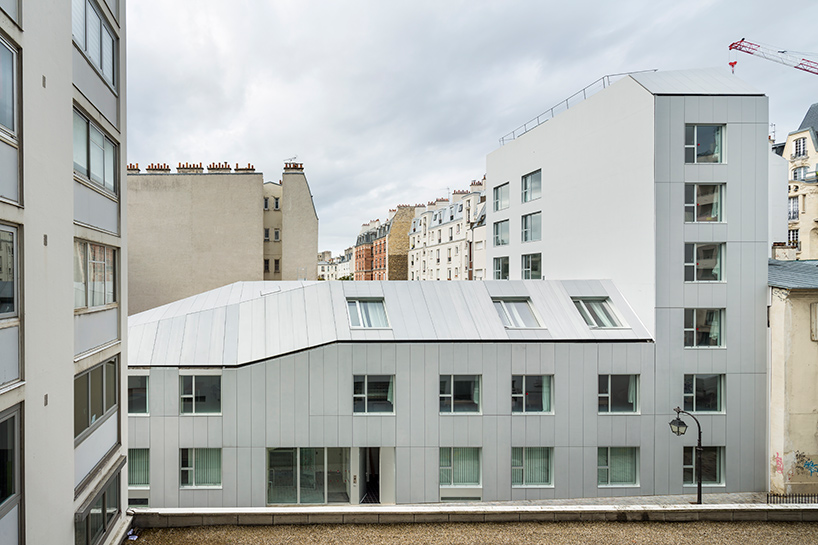 large, central glazed areas, including the main patio, which is itself an ‘outdoor room’, help maintain transparency throughout the ground floor. at the semi-basement level are the building’s service areas, for maintenance, laundry and staff. in the central zone, three large activity rooms are organized around the central patio, from which they receive natural daylight. 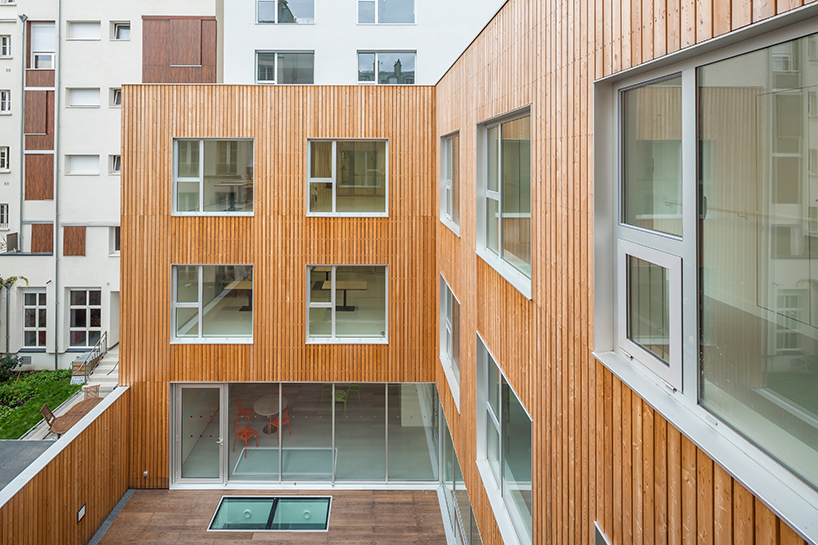 areas where residents would spend the most time, such as the activity rooms and circulation spaces, were calculated in order to prioritize natural light. areas that are used only occasionally — such as physio and psychomotor therapy rooms — are daylit from the sub-basement level. repeating the same configuration of circulation space for each floor of the building, the architects created an efficient means of arranging the various areas. 26 housing units are distributed across the upper floors, while patios provide space for contemplation. corridors have been eliminated in favor of more open circulation routes. 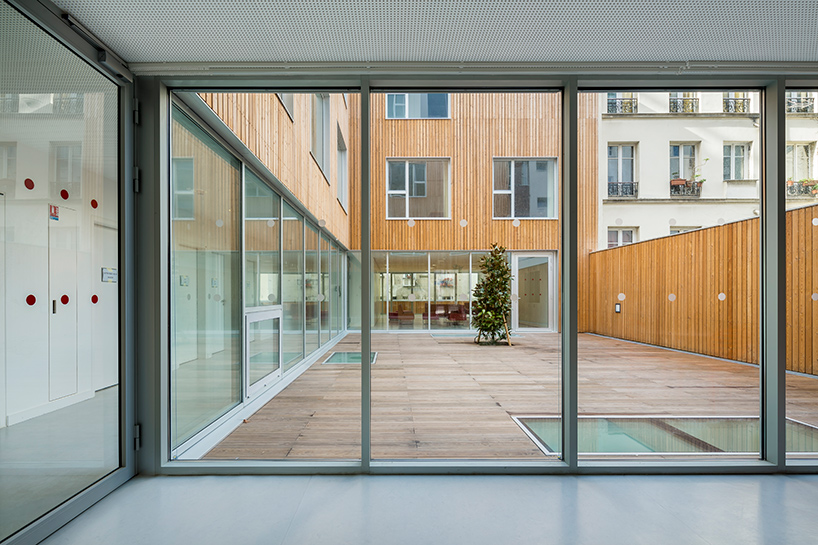 the main patio has been conceived as an outdoor room 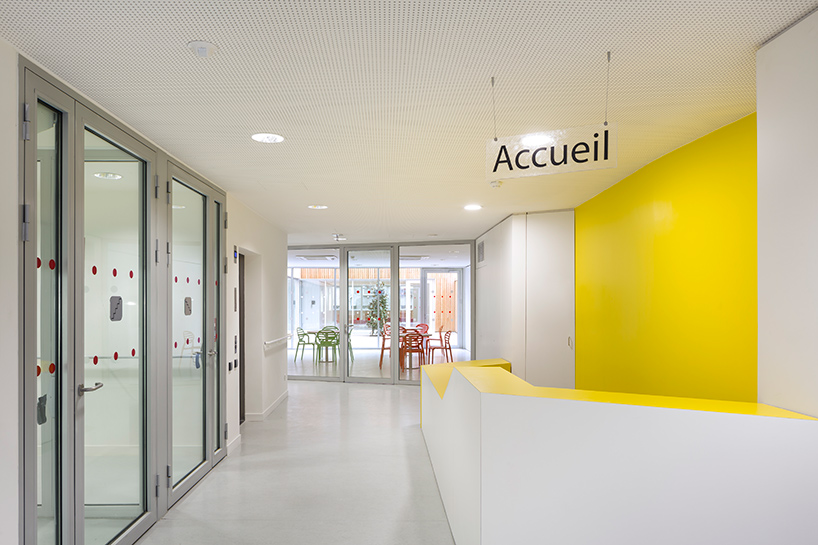 corridors have been eliminated in favor of more open circulation routes 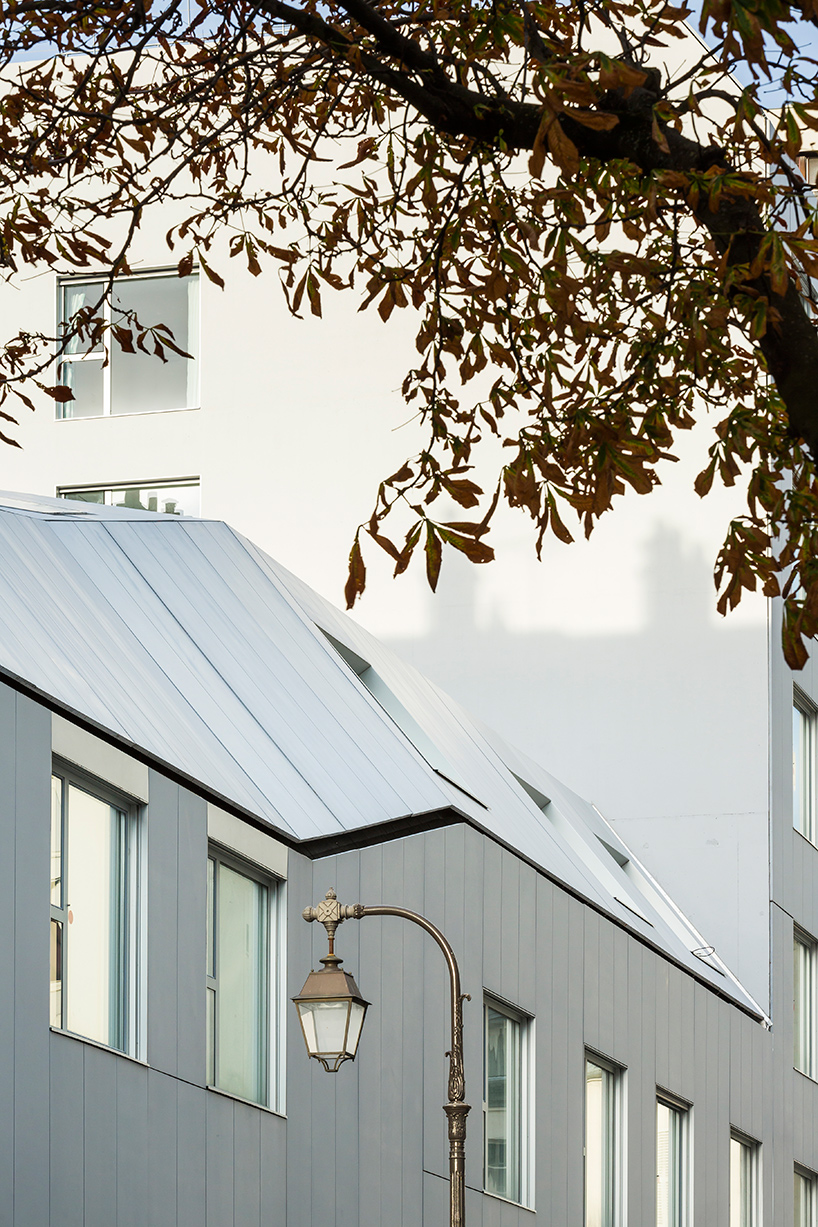 generously proportioned windows provide a maximum of daylight and transparency 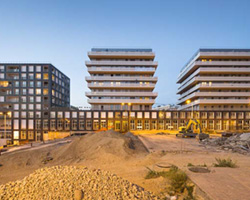 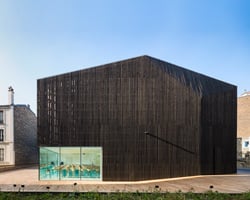 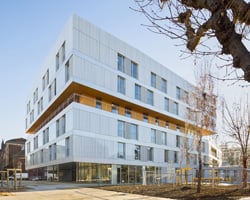 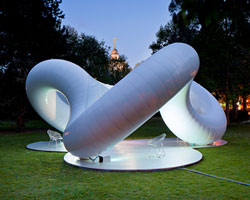 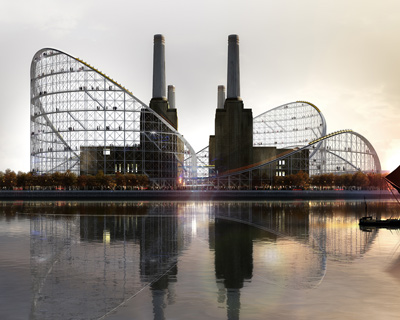