‘reclaim’ -the kingdom of bahrain, the first gulf state to participate in the biennale, reconstructed three fishermen hutsimage © designboom 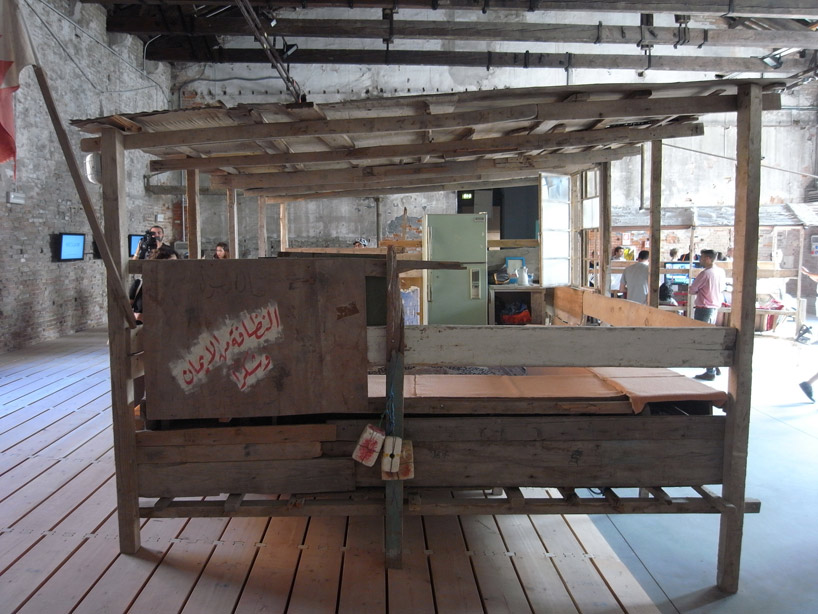 three fishermen’s huts disrupted from their original sites in bahrain form the focal point of the exhibition. the awkwardness of their situation, disconnected from their coastal scenery, speaks of the discomfort of the current relation with the sea. in line with the theme of this year’s biennale, it offers the visitors the chance to experience rather than observe architecture and through a series of interviews allows them to meet with the many anonymous architects as they speak about their relation to the sea. 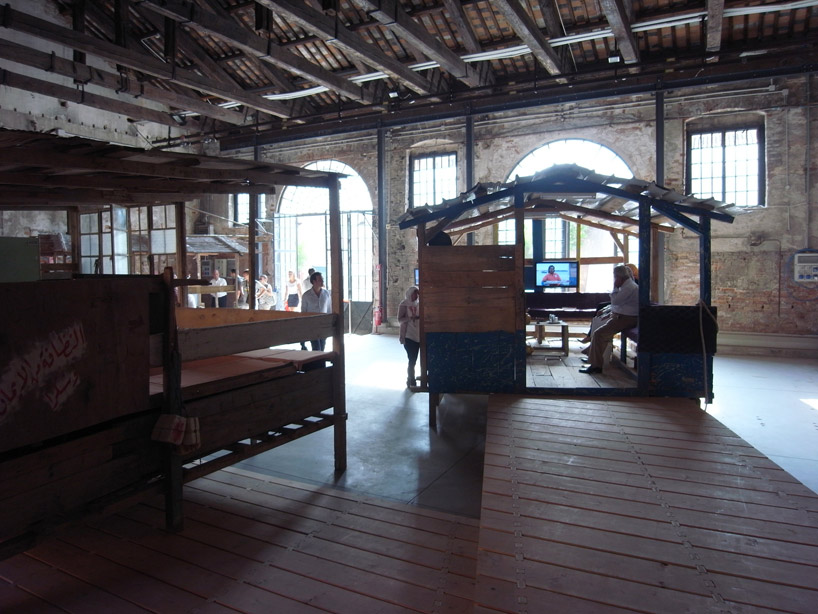 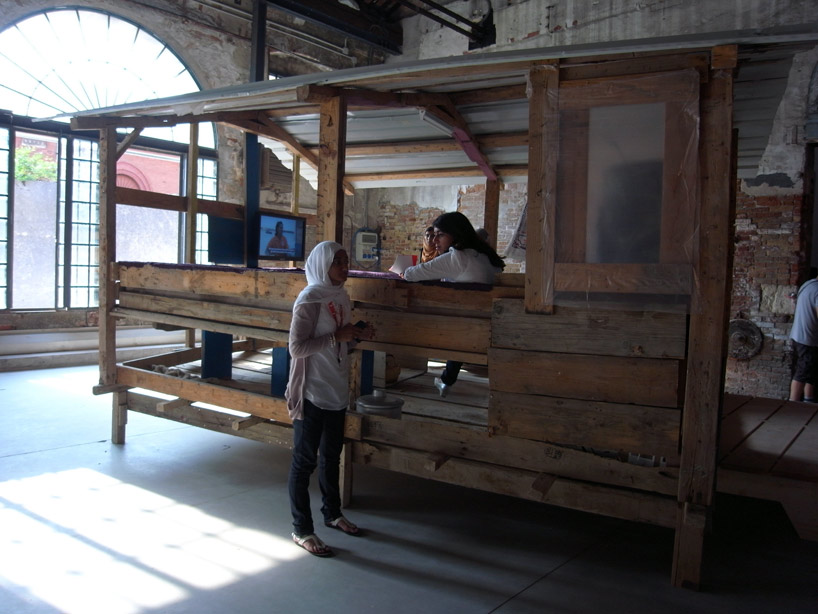 the sea interviews, directed by the bahraini movie producer and director, mohammed rashid bu ali, are the result of a series of interviews conducted by the bahrain urban research team along the coastal areas of the island during the months of april and may 2010. the interviews dwell on the relation bahrainis entertain with the sea, their personal account of the changes that have altered their access to it and their thoughts and aspirations as to how matters could be improved. 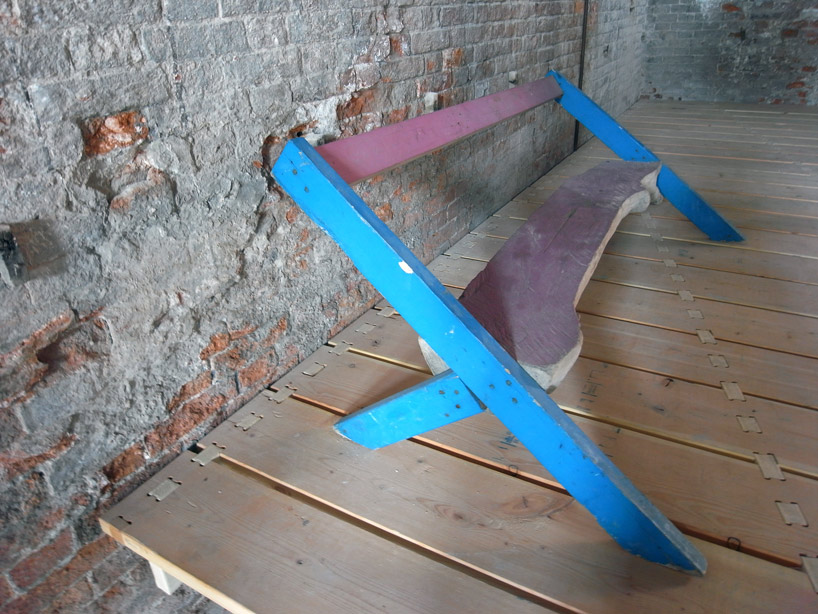 the exhibition design and concept has been developed by prof. harry gugger and leopold banchini of the lapa studio at the ecole polytechnique federale de lausanne, as part of its ongoing research and collaboration with the university of bahrain architecture faculty. the central piece of the exhibition are the three fishermen’s huts which were purchased, documented and dismantled in bahrain and reconstructed, according to their original plans at the bahrain pavilion in the arsenale. the three huts form part of a larger installation, designed by lapa containing the remaining exhibition components. 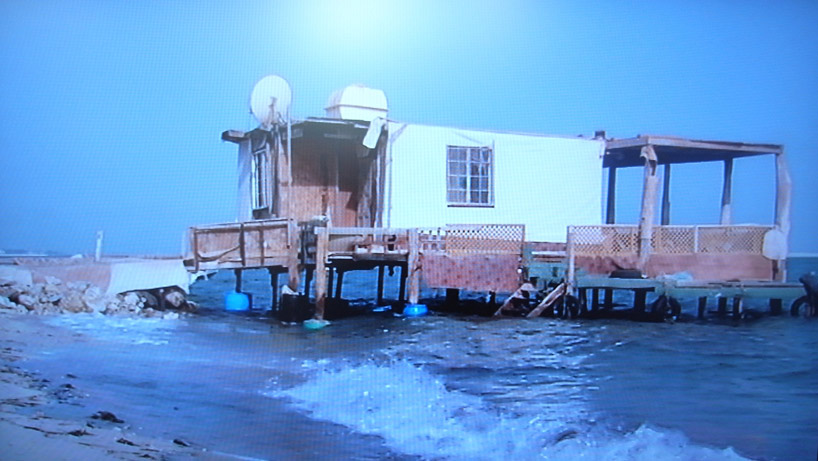 the bahrain urban research team, were comprised of six young researchers, who were responsible for an extensive study which investigated the geographical and urban changes affecting the coastal areas of the island from the 1930s till today, as well as identifying the multiple social, political and economic factors which contributed to this evolution. 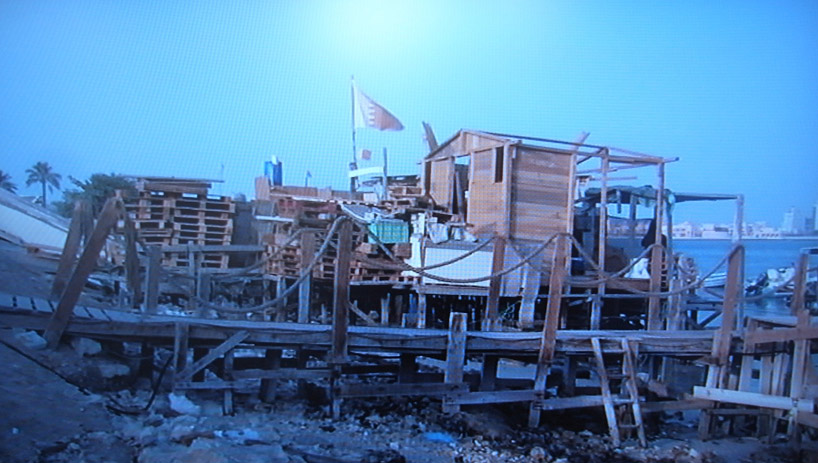 camille zakharia, a bahraini based photographer was commissioned to create a photographic documentation of the varied coastal areas of the kingdom. his portfolio, a coastal promenade, illustrates the variety of the coastal landscape in an objective manner, ranging from the more sombre themes of the ecological effects of land reclamation to a lighter look at the way in which these coastal areas are being appropriated by their users. the results of the research as well as the photographic portfolio formed the basis of an extensive exhibition publication. instead of overwhelming visitors with the extensive visual and scientific documentation which forms the backbone of the exhibition, the content is exposed in the form of a publication, giving visitors the choice of viewing it at their own leisure, either at the pavilion or once they’ve retreated from the exhibition; thus reversing the conventional format of an architecture exhibition. what is exhibited in the pavilion, sums the essence of the problematic in the form of an installation, which can be experienced and enjoyed through an atmospheric approach to the issue evoked and revealing only a hint of the larger problematic at play. 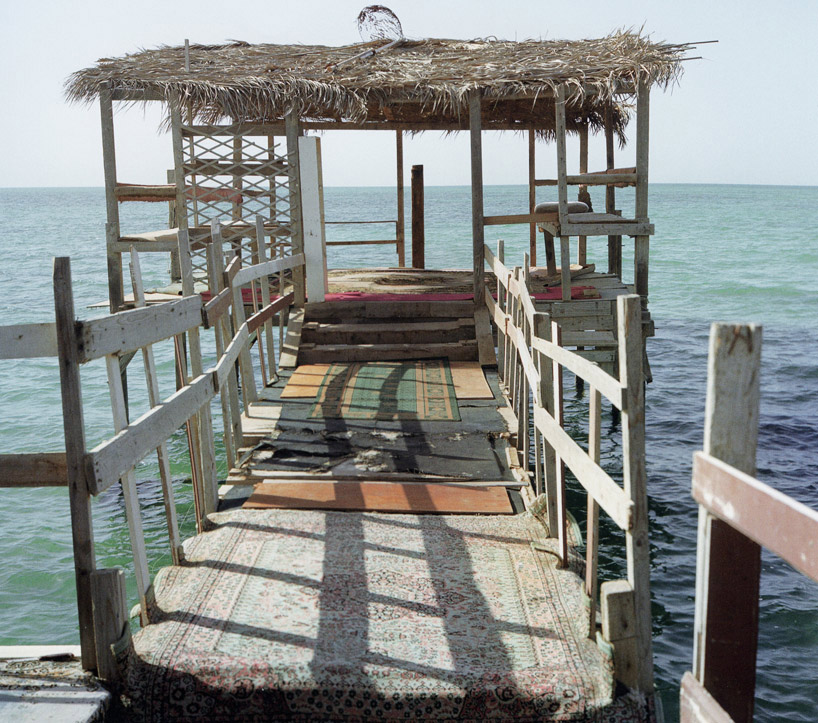 her excellency sheikha mai bint mohammed al khalifa, minister of culture of the kingdom of bahrain and commissioner of the bahrain national participation stated:

‘it has long been my dream to bring a national representation of my kingdom to the prestigious venice architecture biennale. our participation at this year’s biennale architecttura inscribes itself in our ongoing efforts to promote the cultural scene of our small island kingdom and to participate in the contemporary architecture debate, representing a voice from a region that is often spoken about but who less often voices its experiences and challenges. when we first starting gathering thoughts as to how we would choose to represent our kingdom at this architecture exhibition, we quickly agreed that what characterizes our society most while representing significant urban and architectural challenges is our ever-evolving relation to the sea. it is hoped that through our participation we are able to portray in an objective way a segment of our urban landscape, sharing with you the challenges, which lay ahead of us in the hope that a shared debate can be raised.’ 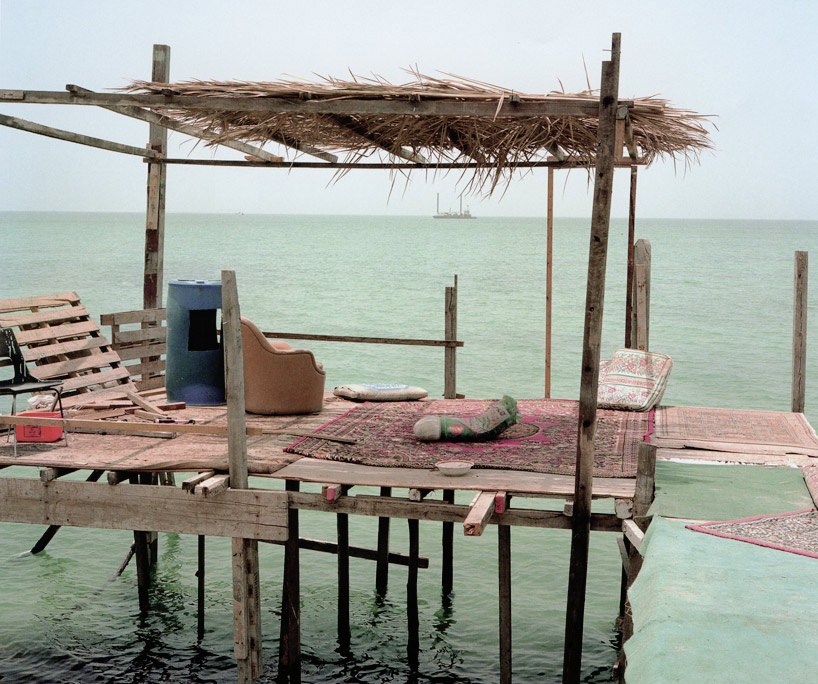 ‘it was our ambition to create a pleasant and intriguing place where people would naturally want to hang out and rest and where they eventually would effortless get informed about a fundamental topic of bahrain’s culture and heritage, the crucial but vulnerable relationship with the sea. in that sense the space in the arsenale is used as a natural backdrop for the human artifacts, the sea shacks which allow their owners to contemplate an immediate relationship with the sea. having been dismantled in bahrain and resurrected at the arsenale in the exact same way, the shacks talk of another interesting topic, architecture without architects. we hoped that with this concept we could engage with the maybe vague but taken seriously highly ambitious theme of this year’s biennale, ‘people meet in architecture’. 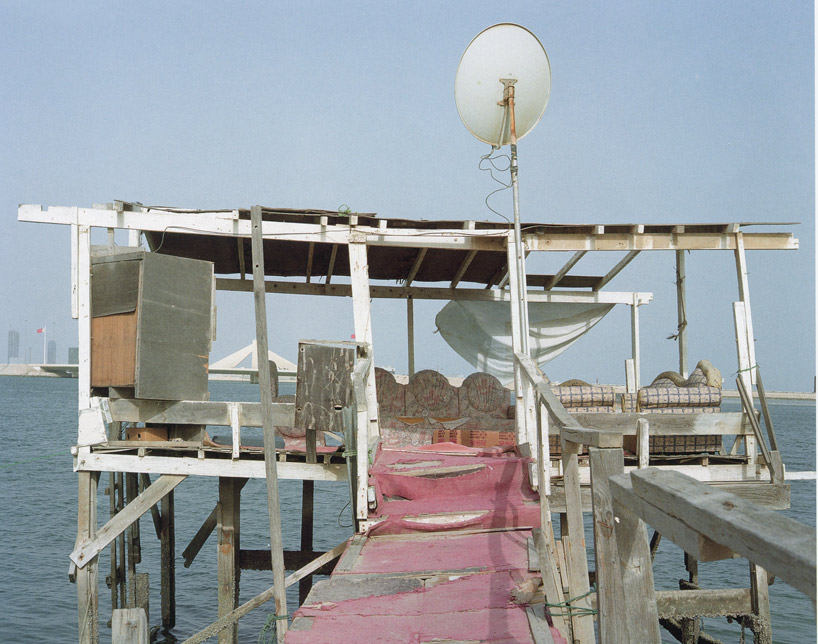 noura al sayeh, head of architectural affairs at the ministry of culture and co-curator of the exhibition says:

‘as a first time participant, we had the double challenge of preparing a compelling exhibition, which at the same time would act as an ambassador to bahrain, a country which many people would hear of for the first time. from the start, we tried to avoid that this first participation become a showcase for contemporary architecture in bahrain, but instead use the biennale as a platform from which we would be able to debate on our urban and architectural challenges. rather than focusing on the more publicized issues of the rampant urban development and land reclamation, we chose to take a look at the social consequences of these transformations and the way in which bahrainis were reacting to them through architecture.’ 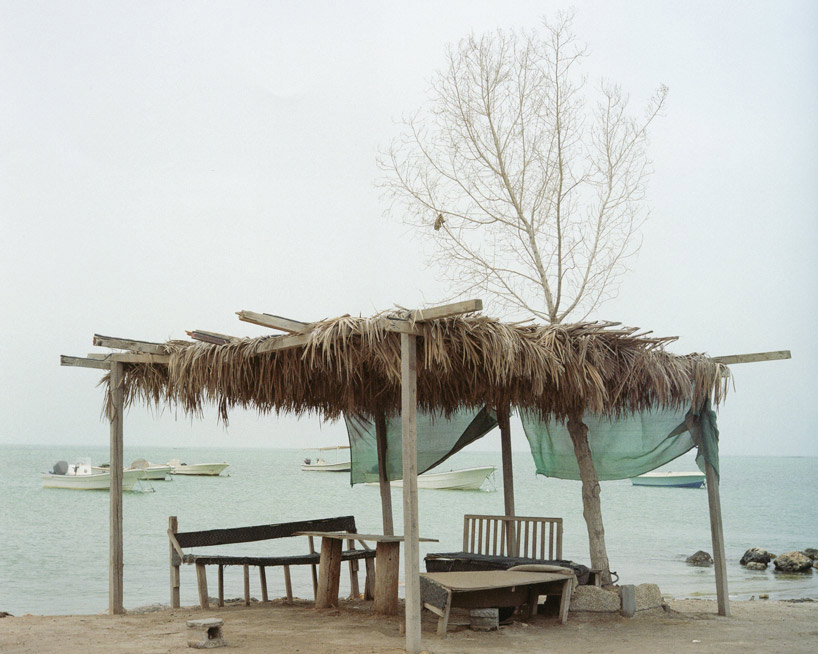