with a proposal inspired by scottish castles and biophilic design, barry wark shares his idea of how to rebuild glasgow school of art. originally designed by charles rennie mackintosh, the art nouveau building was first built between 1897 and 1909. serving as a renowned art and architecture school for decades, the structure was severely damaged during fires in both 2014 and 2018. 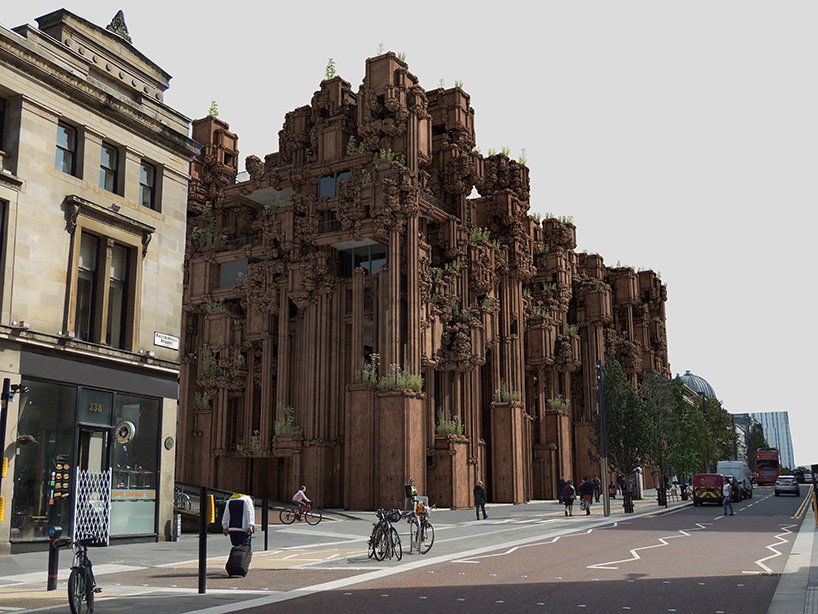 all images by barry wark

barry wark‘s scheme proposes the redevelopment of the building and its neighbor to create a new art school alongside a series of public spaces and gardens. the existing façade is retained and restores key interiors and circulation paths to replicate the tour routes pre the 2014 fire. the studio spaces are moved into the extension creating a void that provides a public space for events, gatherings, and exhibitions. 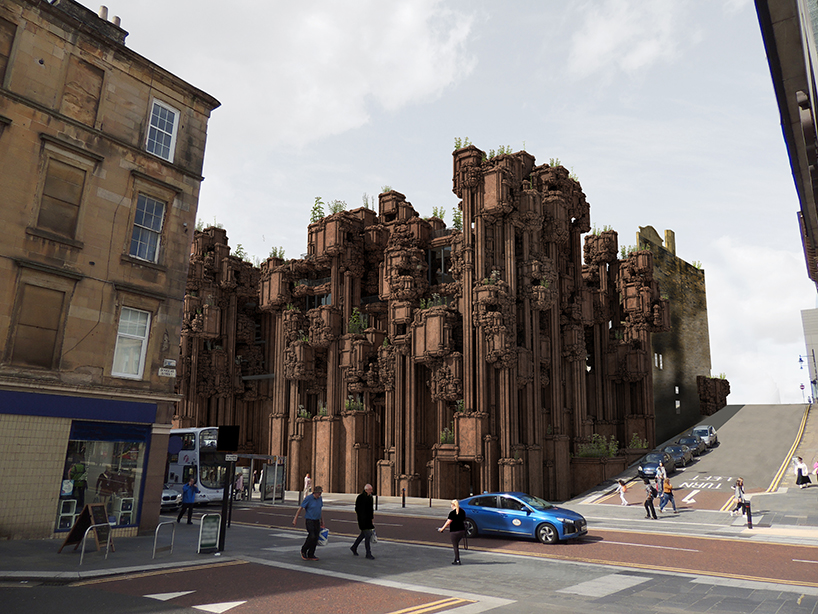 the extension is composed of studio spaces as well as zones reserved exclusively for plant colonization, which aim to bring notions of wilderness into the city. the building’s façade is characterized by its folded geometry with multiple seams on every element. this intricate geometry exists to encourage the propagation of vegetation from seeds dispersed there by the wind. the result is plant growth in a wild and nondeterminate manner inspired by the urban cliff hypothesis, which ‘predicts that a large proportion of spontaneously colonizing organisms in cities originate in rare and geographically marginal rock outcrop habitats (Larson et al., 2004).’ (via urbanhabitats) 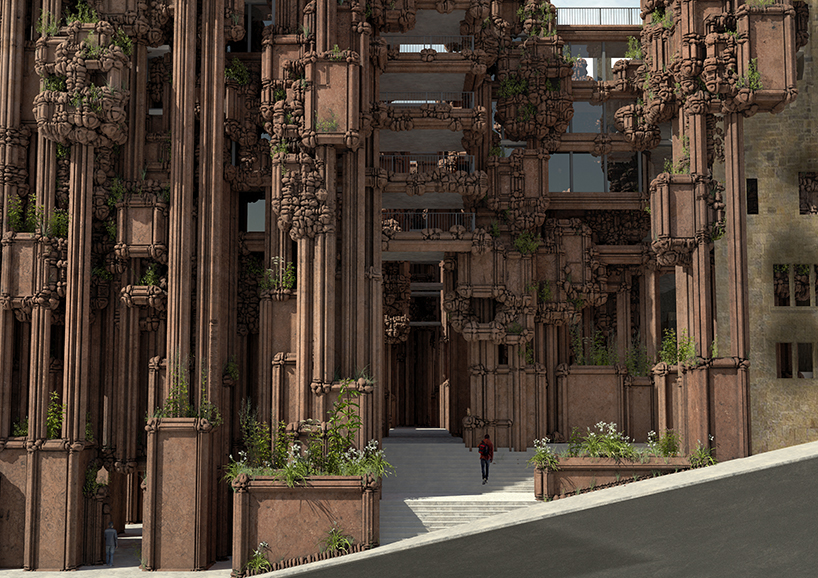 in addition to taking inspiration from the castles and megalithic architecture of scotland, the design also makes further reference to the original building. rather than proposing a definite solution, this scheme by wark looks to stimulate future conversation about the art school two years after the second fire. it takes the position that a new block wide development offering new forms of public spaces and gardens in glasgow’s city center could be preferable to a total faithful reconstruction. 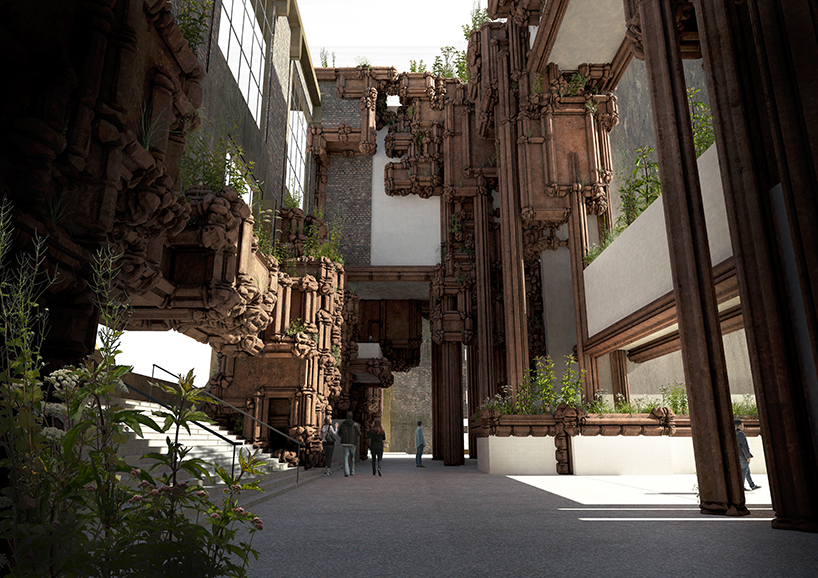 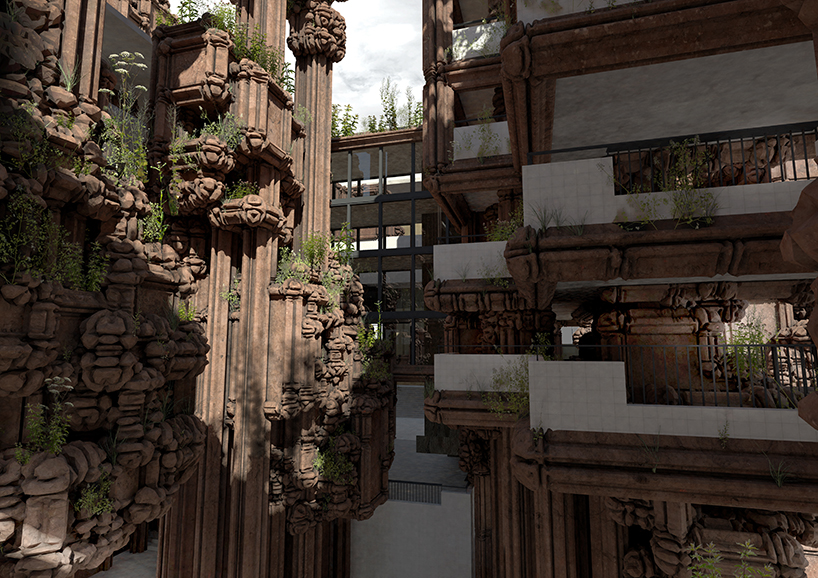 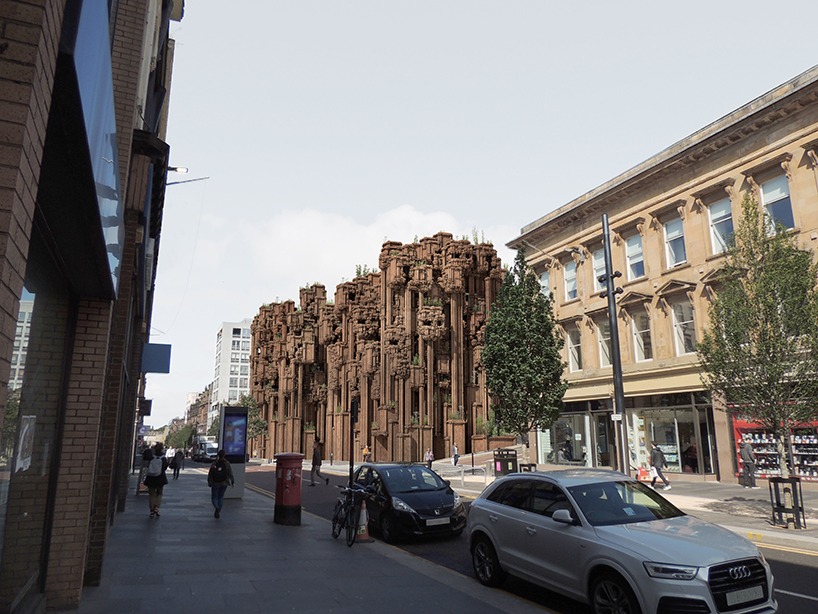 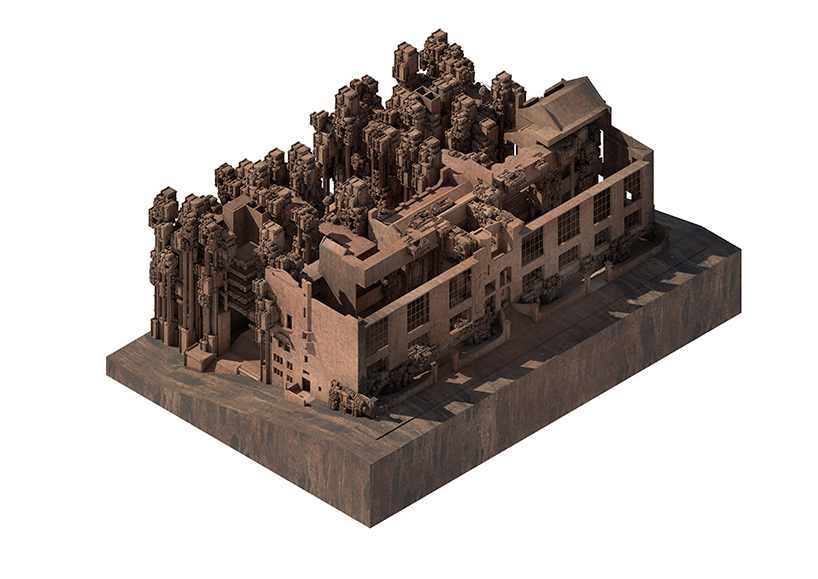 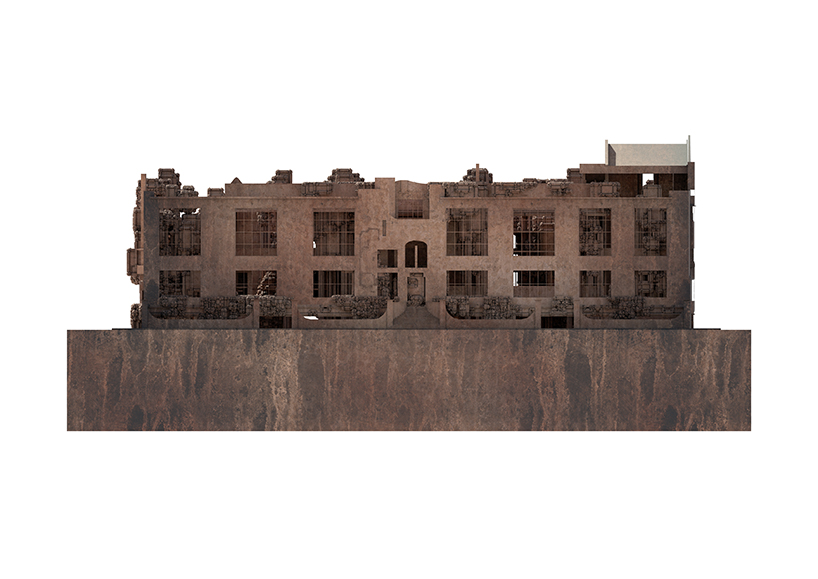 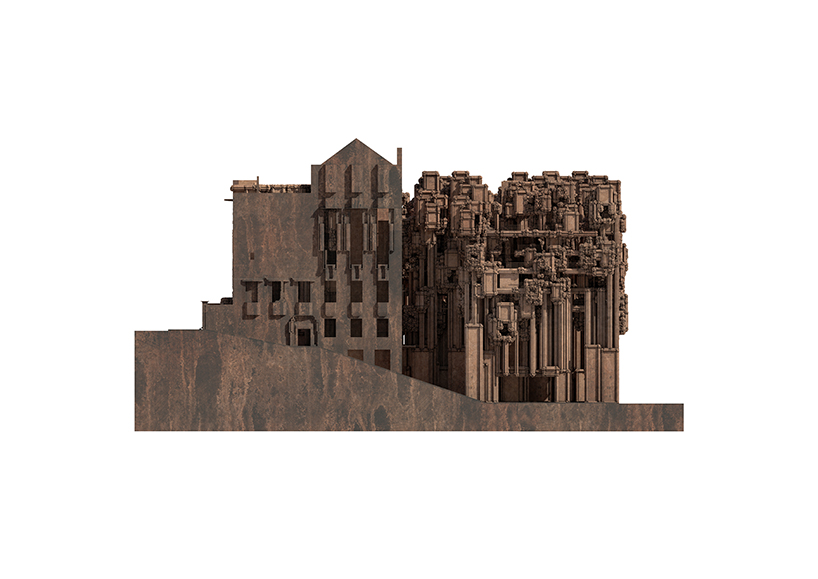 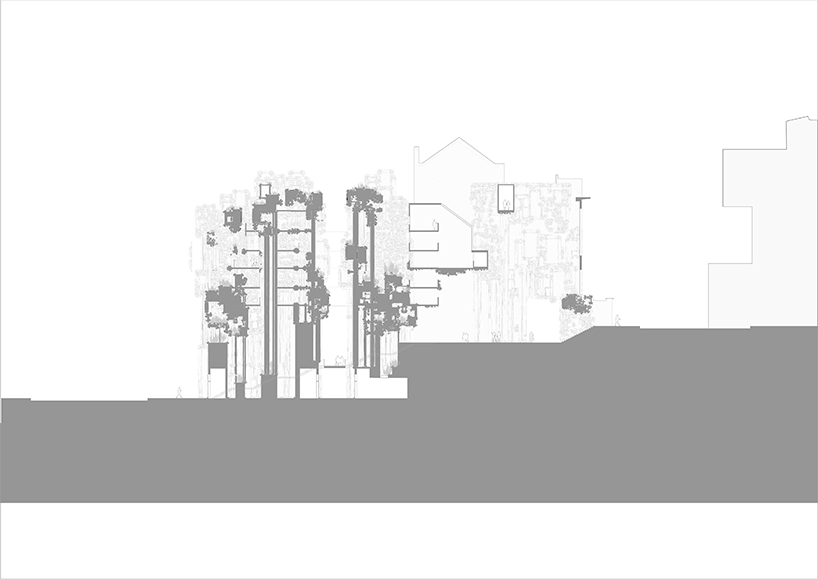 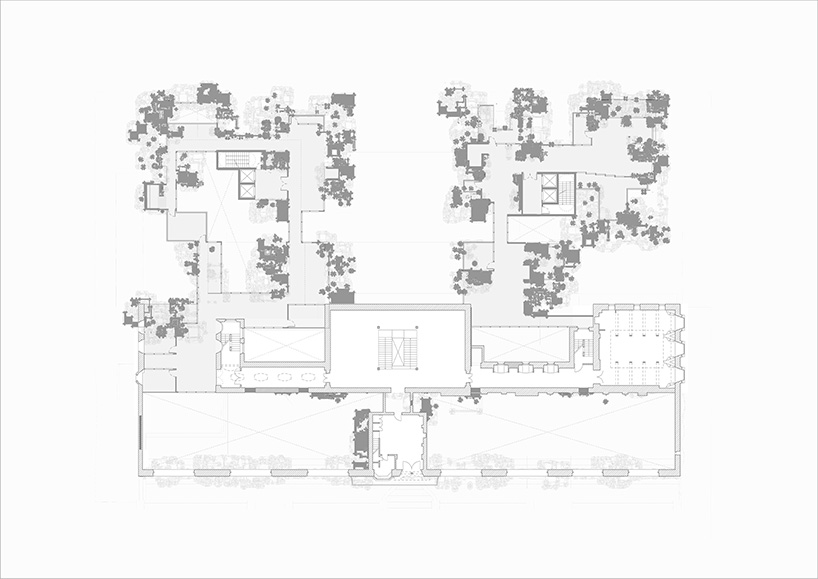 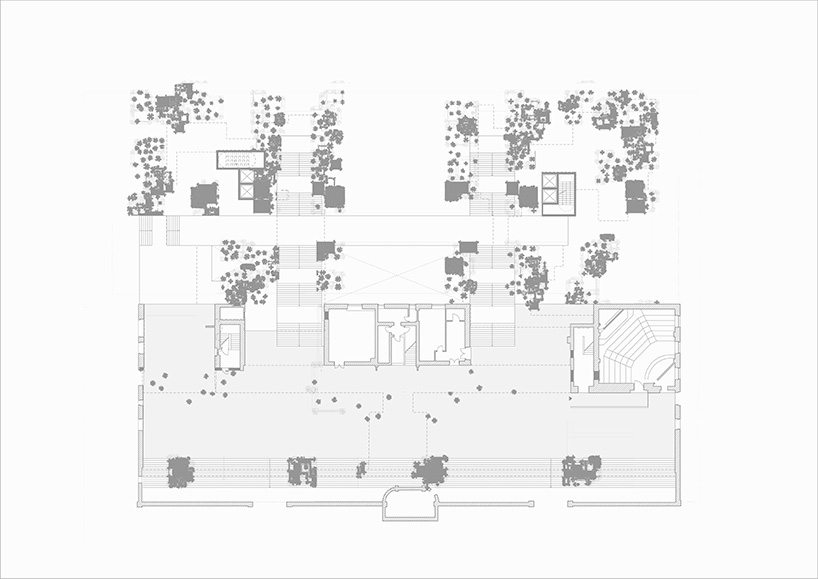