realized by BCHO architects for a client in seoul, gizi _art base is a single building that hosts a multitude of functions. comprising a commercial space, a gallery, an office and a multi-family housing unit, the interior program has been carefully designed to cater for each spatial requirement while creating a unified and singular architectural expression. 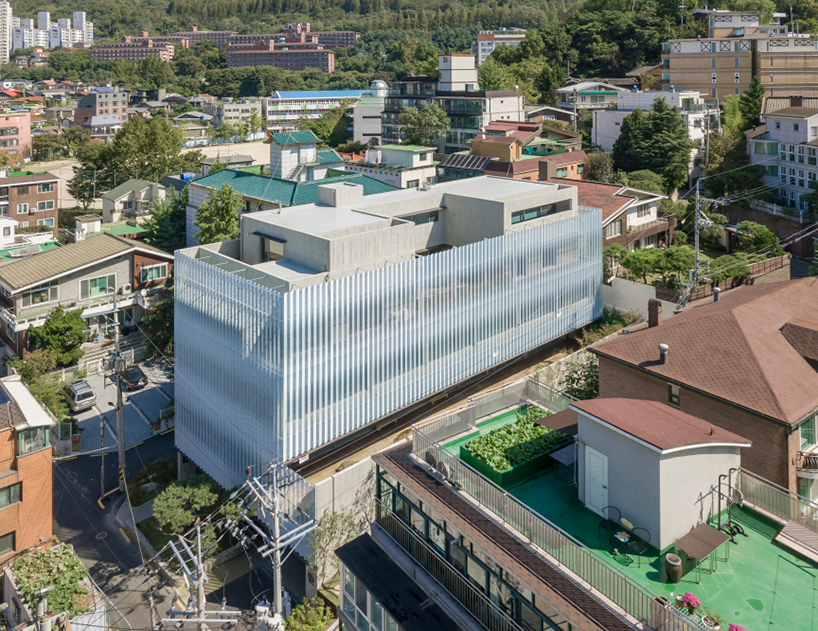 all images by kim yong kwan and sergio pirrone

the ground floor commercial space required easy visual recognition and street access, while the gallery called for a more intimate and private setting for viewing and selling artwork, resulting in it being positioned to the edge of the site. the office space needed a calm atmosphere, and the individual residential units had to be both separately divided yet connected through a central courtyard. in order to accommodate the disparate and conflicting nature of these programs, BCHO stacked the four volumes vertically into one singular mass. 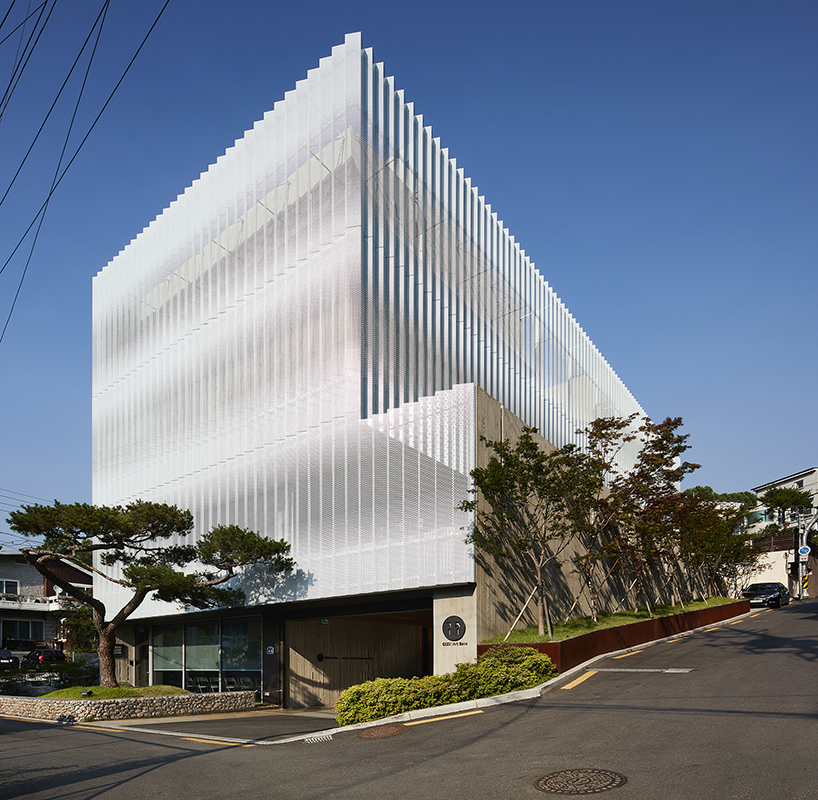 the design of the building takes inspiration from park seo-bo – the prolific korean painter. known for his subtle and repetitive paintings, his ongoing conversation with BCHO became a point of departure for creating the overall aesthetic of the new architecture. his paintings are layered to such an extent that a subtle depth emerges, drawing viewers in to the complexity of the paint and the canvas. when developing gizi_art base, the architect intended to create various intricacies in reflection of seo-bo’s painting, and their gentle complexity. 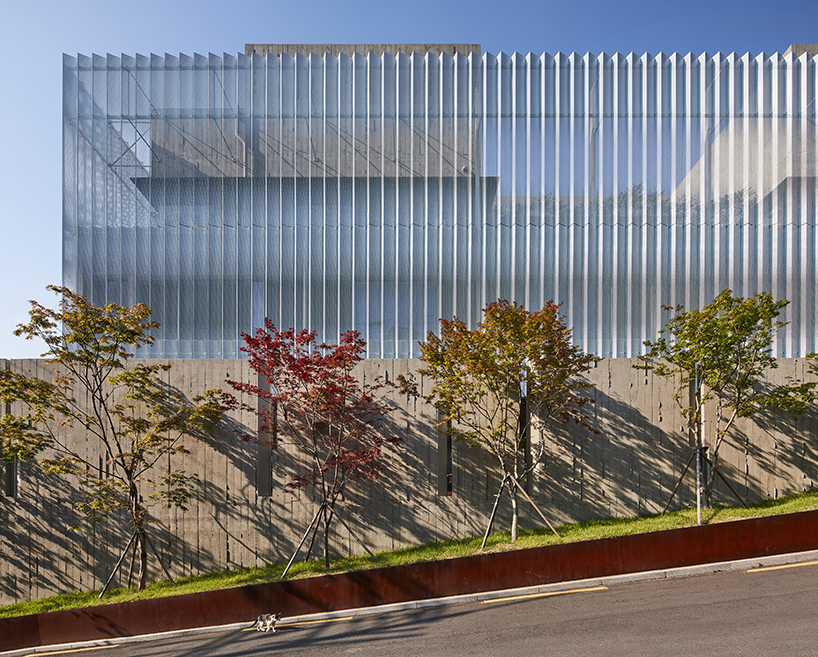 when designing the ground floor gallery space, affording flexibility was a key aspect. the size of each vertical support was therefore minimized by using CFT (concrete filled tubes) and PT (post tension) structural systems. at the same time, utilizing long span cantilevers helped realize a flexible, open space that stretches toward the exterior garden. the garden itself was kept simple and abstract, composed only of moss, rock and gravel, resulting in a contemplative environment ideal for viewing the various artworks in the adjacent gallery. meanwhile above, the privacy of the three households is maintained by dividing the units along a central courtyard. 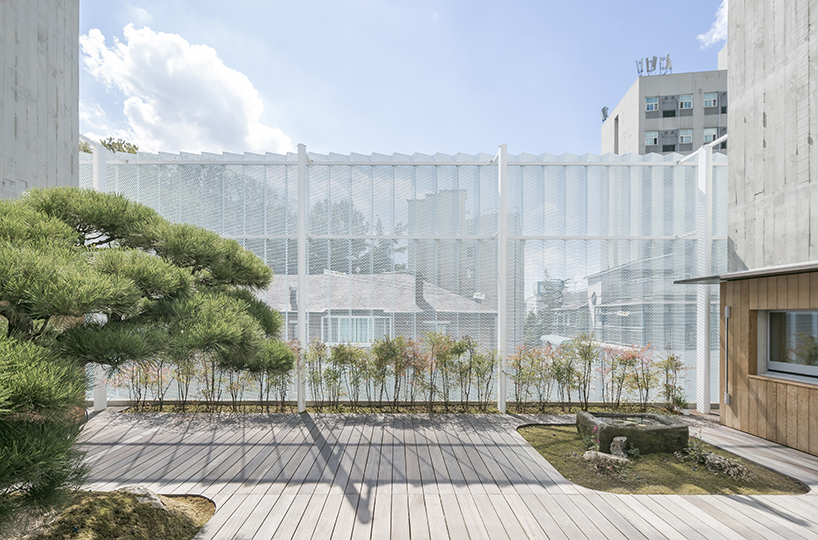 rather than applying a number of different façades responding to each of the different programs, the architects devised a singular system that would coherently meet the wide spectrum of architectural needs while simultaneously reflecting a sense of depth and simplicity. additionally,  BCHO wanted to convey the layers of complex subtlety found in seo-bo’s paintings. 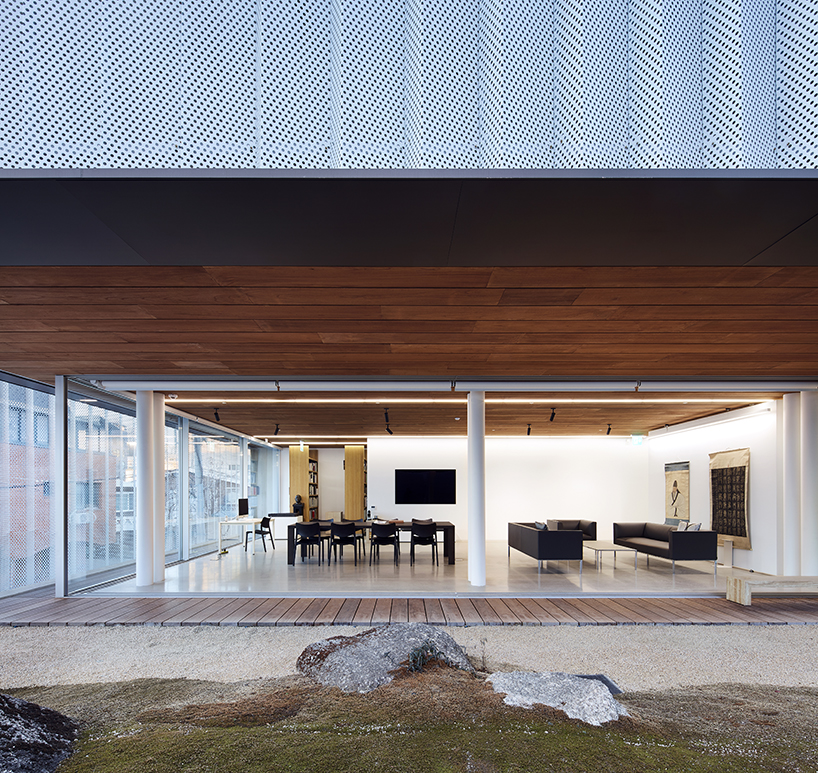 folded aluminum panels array along the periphery of the building, with various diameters of punctures indicating a hierarchy of visual transparency. where the panels are most widely cut, they provide approximately 70% visual transparency, set between the eye levels of someone who might be standing or sitting. this coaxes a visual connection with the building’s surroundings, while a gradient delineates to roughly 30% transparency along the upper and bottom edges. 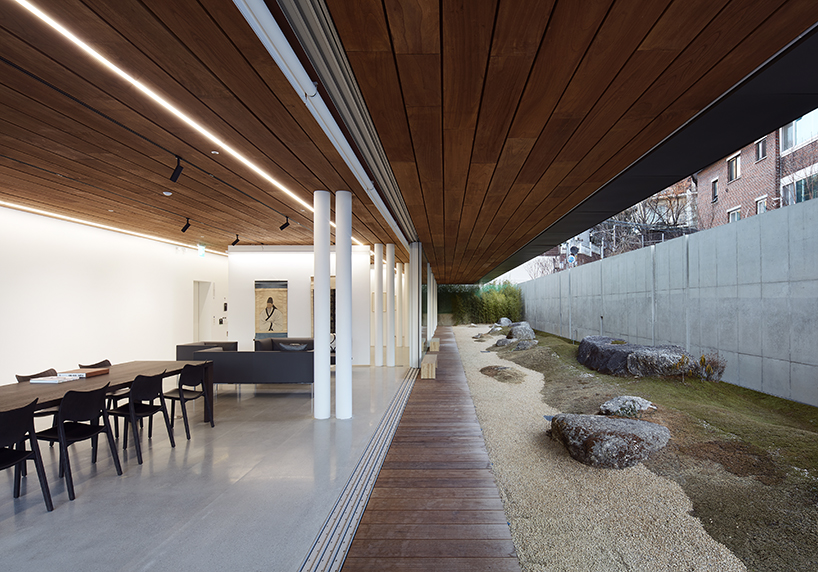 the panels are bent at obtuse angles, and, because the folds provide inherent structural rigidity, there is no need for any additional support systems. in elevation, the folded panels realize a dynamic interface, responding differently to the shifting sunlight and shadow. the changing look of the screen façade adds a layer of depth to the heavy, solid mass underneath, and provides a united character to gizi _art base. 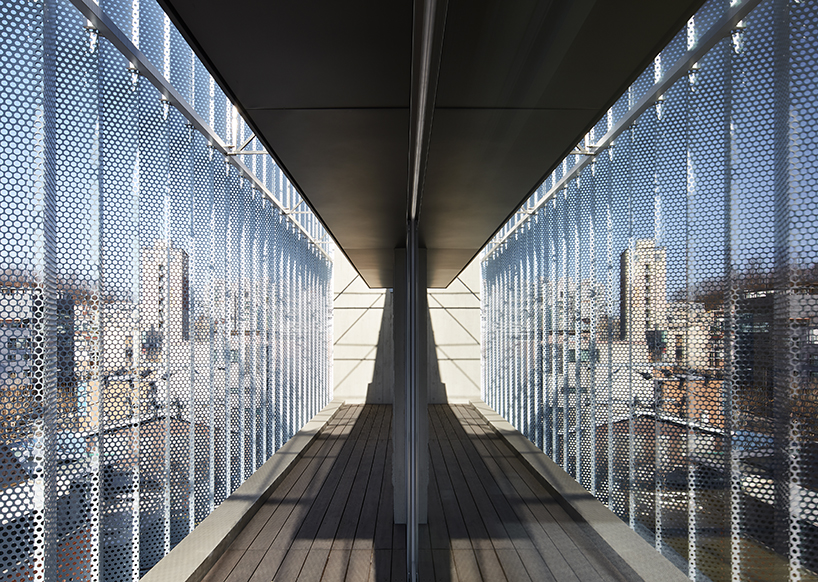 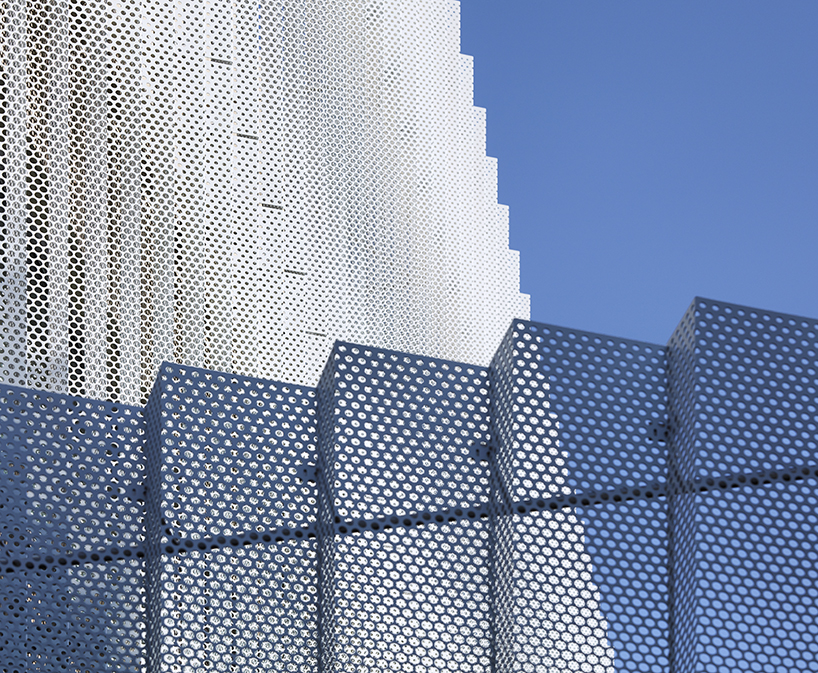 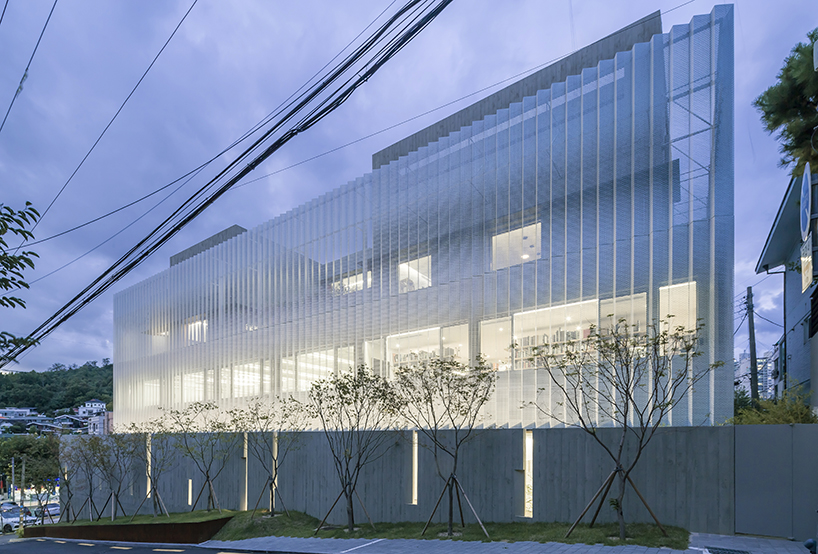 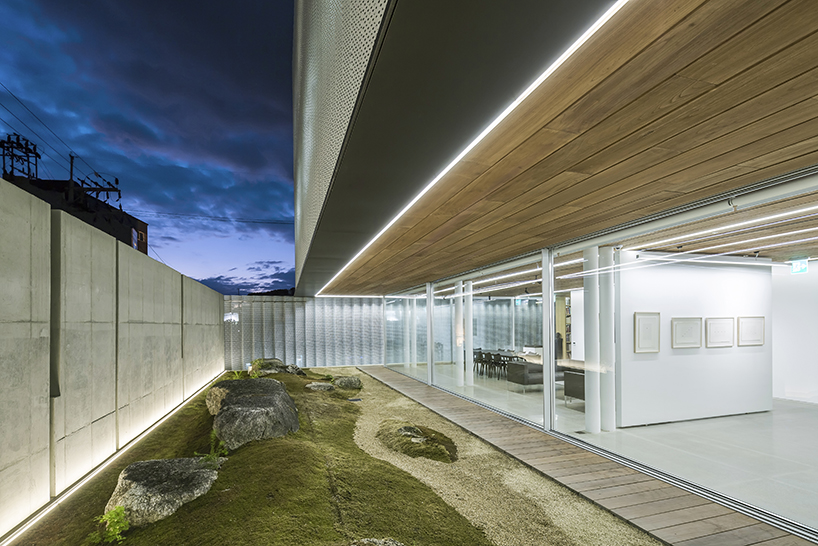 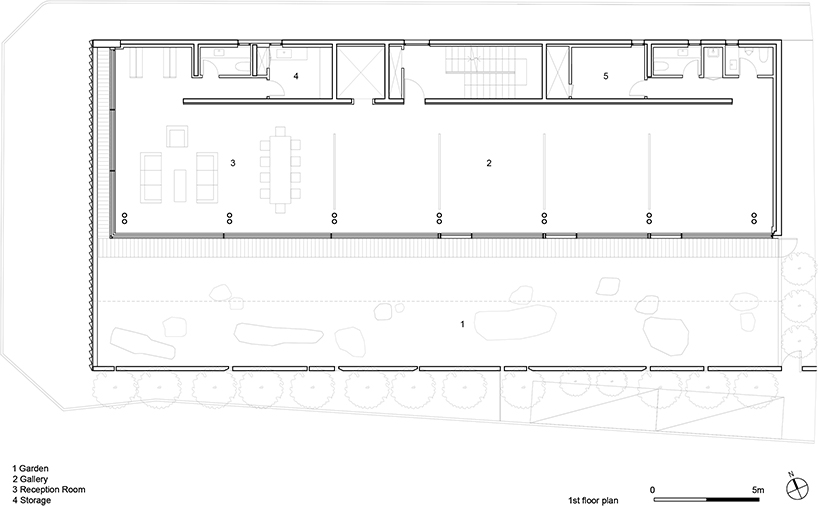 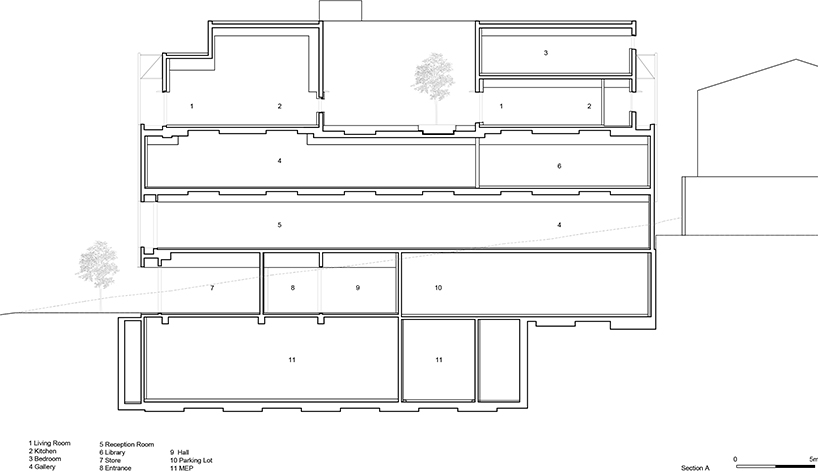 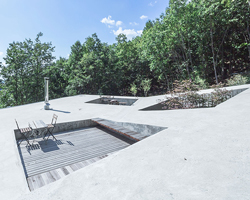 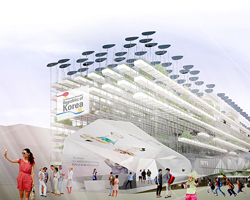 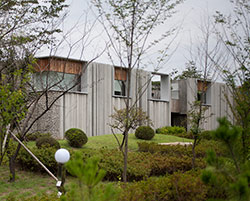 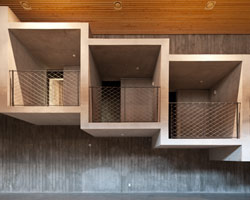