images have been revealed of bjarke ingels group / BIG’s much-anticipated serpentine pavilion located at the heart of london’s hyde park. the design of the ‘unzipped wall’ forms a dramatic and three-dimensional structure that hosts a café and stage for the serpentine’s park nights series of live events.

the geometric structure has been built from 1,802 fiberglass frames, and references the simple and basic form of a brick wall. together, the undulating frames effortlessly combine multi-functional features and simultaneously serve as a wall, a covered hallway, a gate and a general gathering space. bjarke ingels describes his creation as a giant shelf which will inherently ‘create a lot of unscripted possibilities outside and inside’. 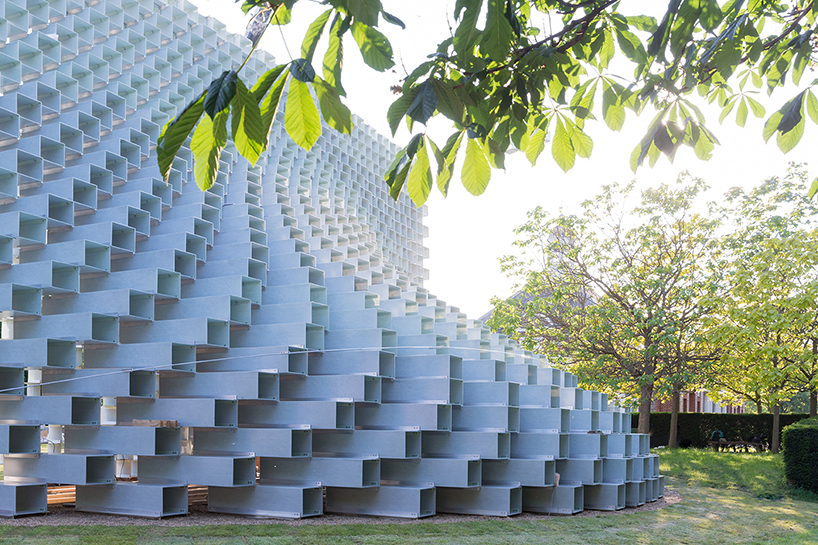 ‘we decided to work with one of the most basic elements of architecture: the brick wall,’ explains bjarke ingels. ‘rather than clay bricks or stone blocks, however, the wall is erected from pultruded fiberglass frames stacked ontop of each other. the wall is then pulled apart to form a cavity within in, to house events of the pavilion’s program.

‘this ‘unzipping of the wall’ turns the line into a surface, transforming the wall into a space. a complex, three dimensional environment is created that can be explored and experienced in a variety of ways, inside and outside. at the top, the wall appears like a straight line, while the bottom of it forms a sheltered gallery at the entrance of the pavilion and undulating hillside towards the park.’ 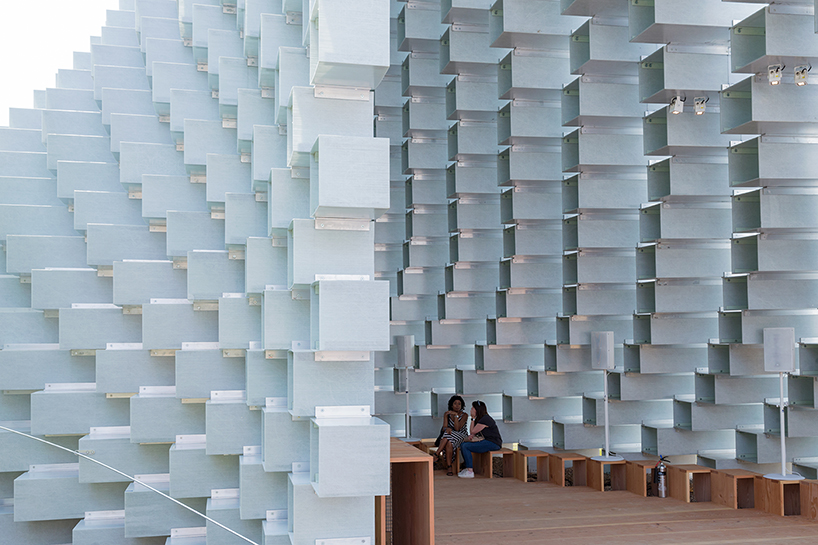 the geometric structure has been built from 1,802 fiberglass frames
image © iwan baan

the scheme has been conceived as a ‘cave-like canyon’, which is lit through the fiberglass frames and the gaps in the shifted series of boxes. a finish of translucent resin also provides reflected illumination. materials such as wooden floors and extruded fiberline profiles provide warm glow as well as a linear texture. the pavilion’s north-south elevation appears as a perfect rectangle, while the east-west façade forms an undulating sculptural silhouette where the form is completely opaque and material. this serves as a contrast to the east-west elevation where the structure is entirely transparent. 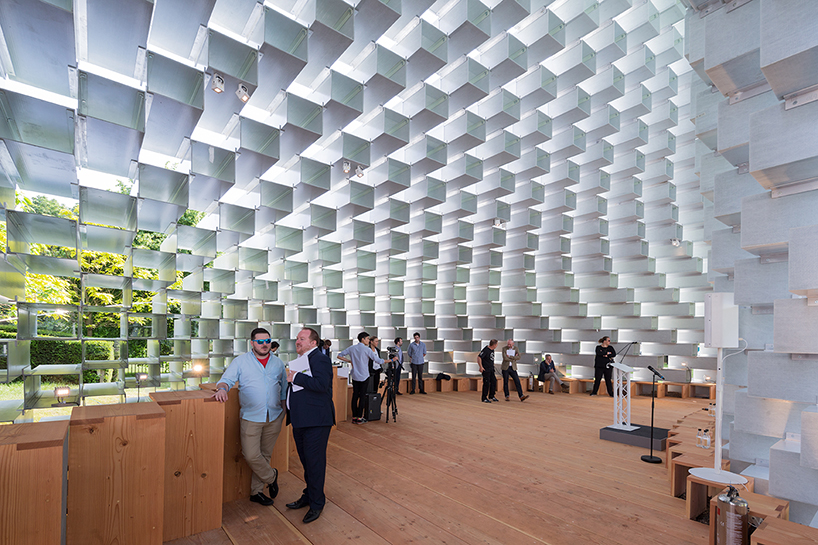 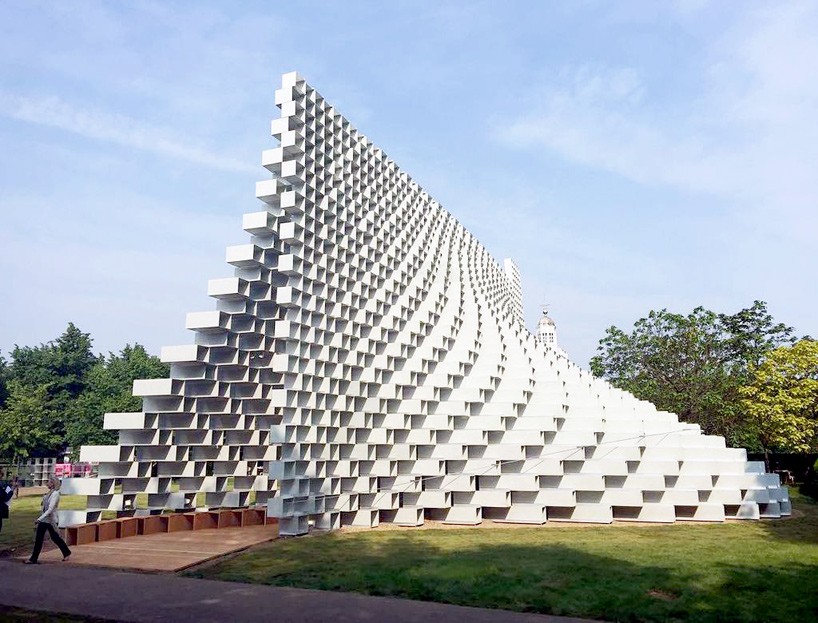 the pavilion works with one of the most basic elements of architecture: the brick wall
image © camronpr 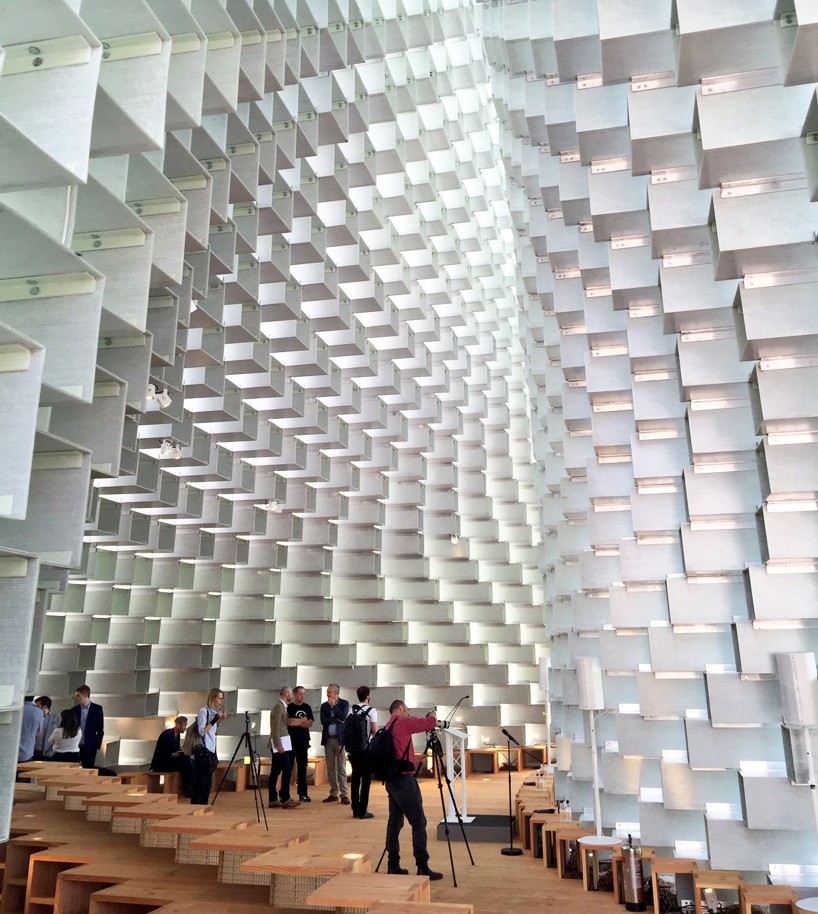 inside the ‘unzipped wall’
image © camronpr 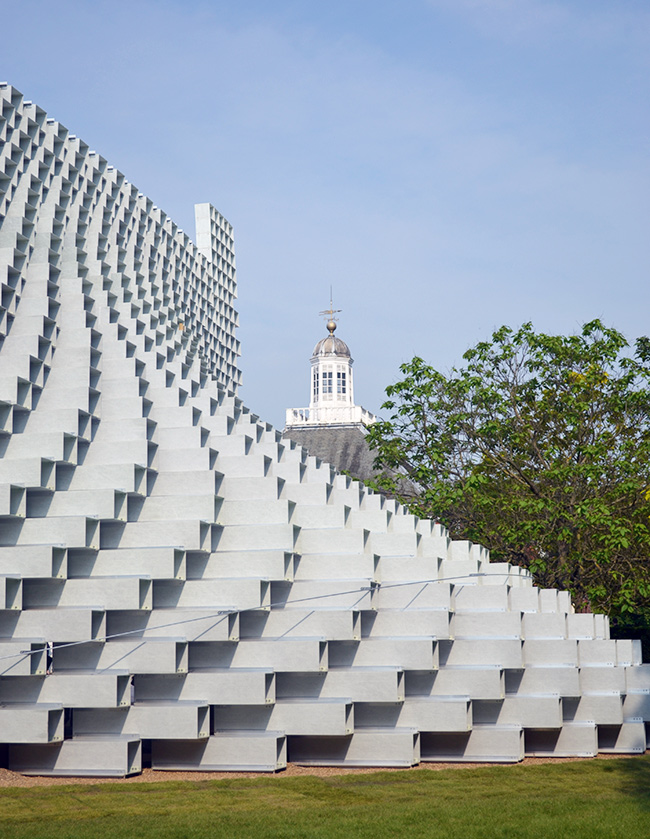 the structure serves as a covered hallway, a gate and a general gathering space
image © camronpr 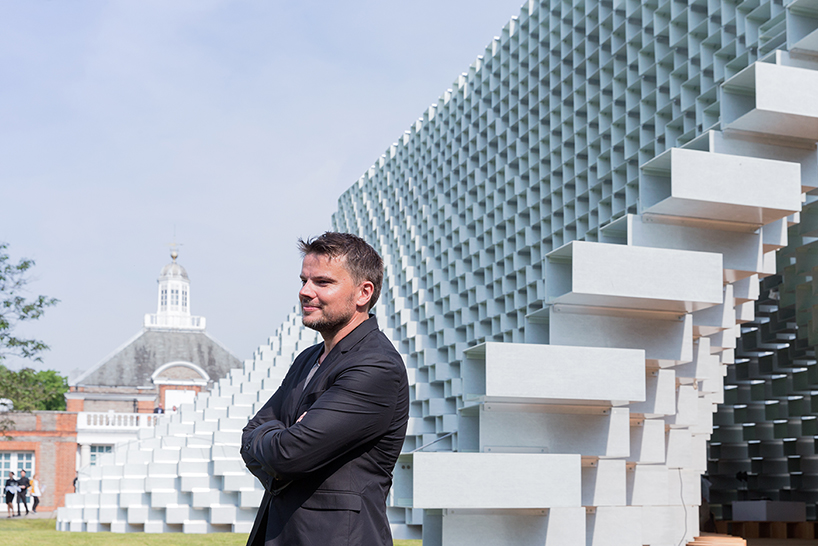 Serpentine through the cave

serpentine galleries has also launched a program that sees four international architects; kunlé adeyemi, barkow leibinger, yona friedman and asif khan each design a 25 square meter summer house influenced by queen caroline’s temple, a nearby classical style summer house built in 1734. see the four designs below, and read more about each of them on designboom here.

read our previous coverage of this year’s serpentine pavilion here. 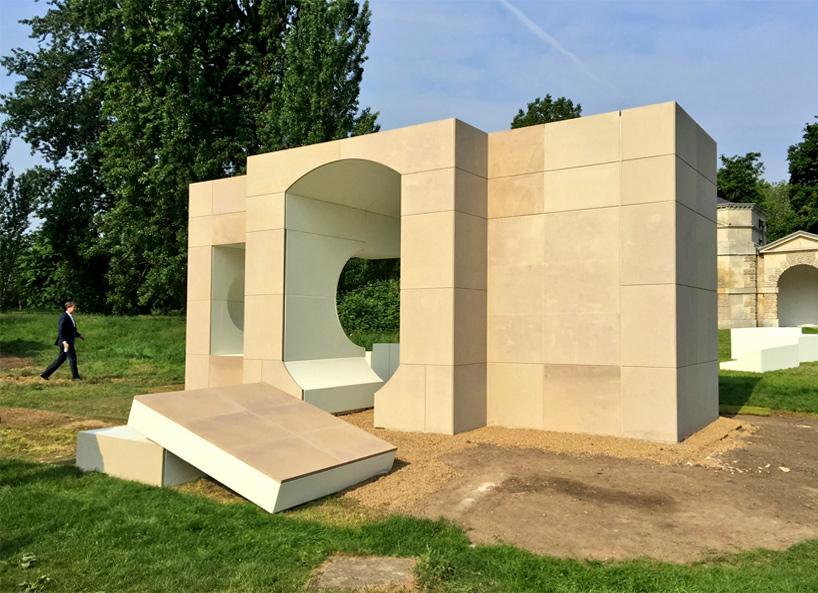 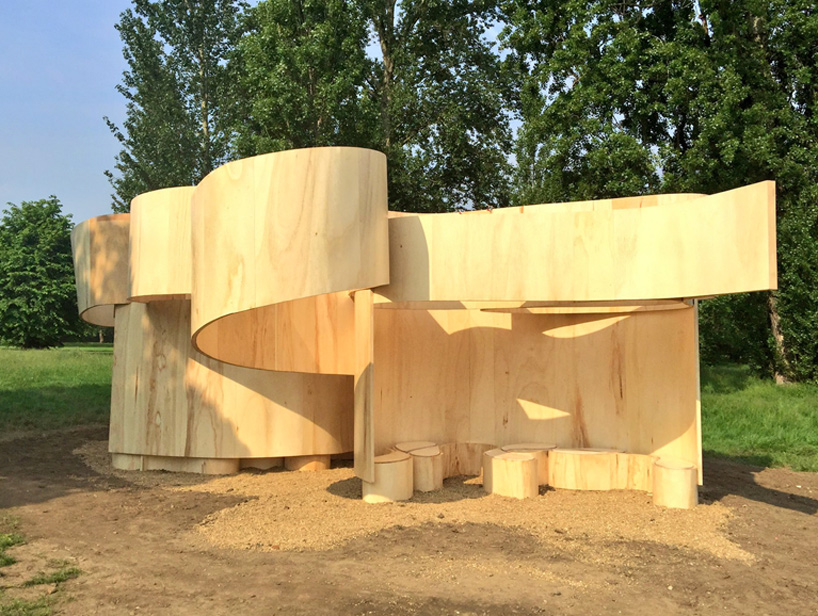 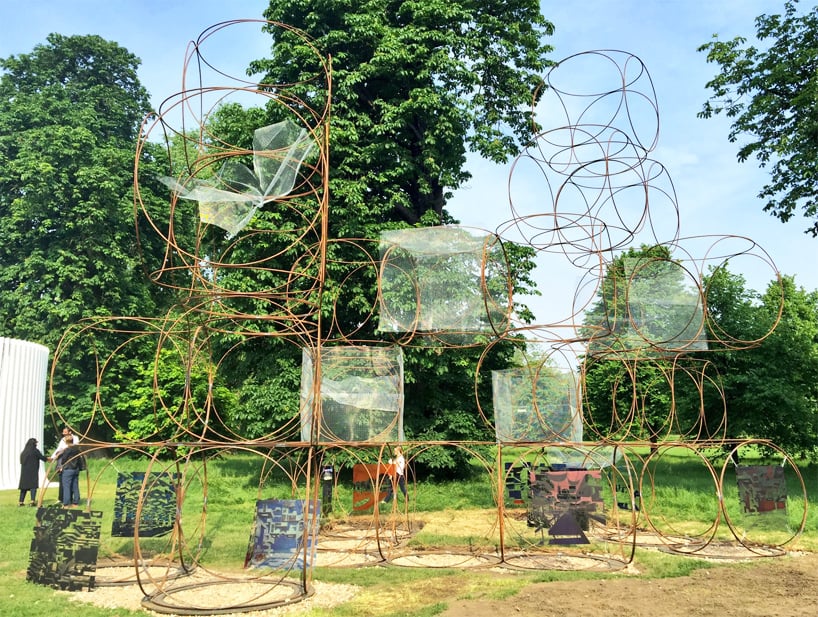 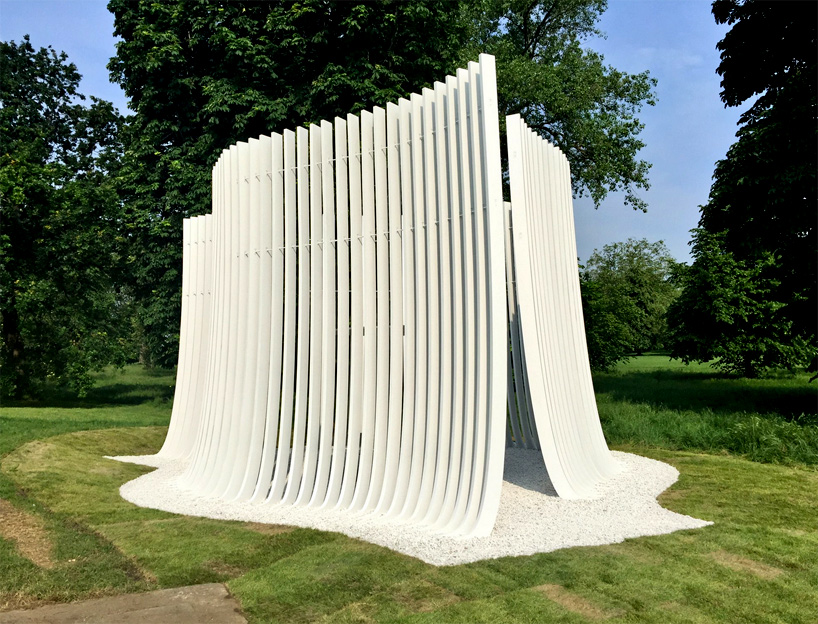 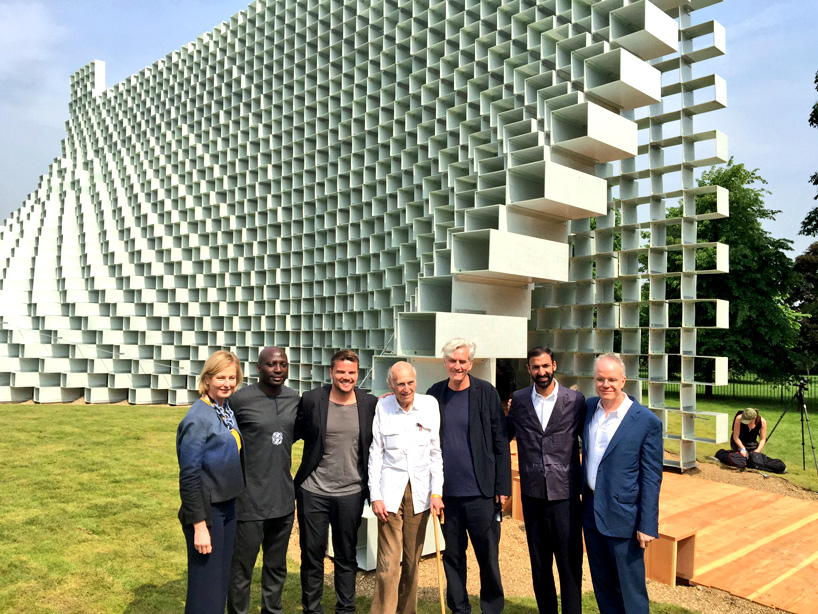 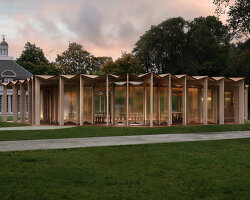 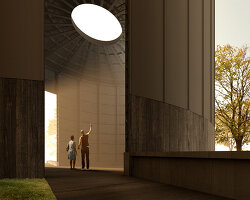 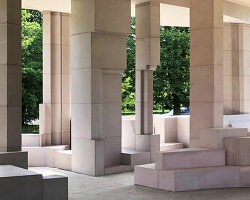