for the 2021 venice architecture biennale, the british pavilion has been transformed into the garden of privatised delights  by curators manijeh verghese and madeleine kessler, co-founders of unscene architecture. inspired by the garden of earthly delights  — the famous triptych oil painting by hieronymus bosch –, the exhibition commissioned by the british council takes visitors on a journey through six immersive environments, each of which explores the theme of privatized public space in the UK.

designboom spoke with verghese and kessler ahead of the venice architecture biennale opening to find out more about the exhibition. in the interview, which you can read below, they discussed the importance of pubs, high streets and public toilets, and why public space is more relevant than ever before. 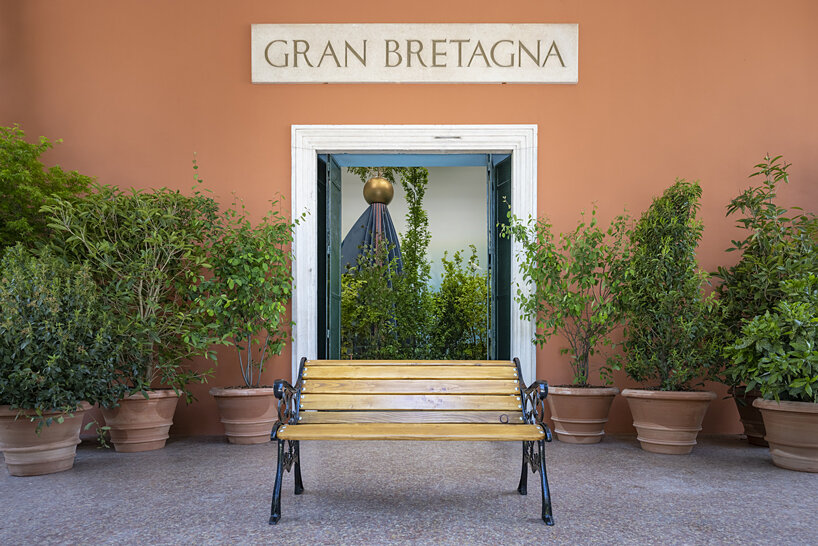 designboom (DB): this year’s british pavilion exhibition is all about privatized public space in the UK. what first drew you to this subject?

madeleine kessler (MK): our interest in privatized public space came out of a summer school that we taught together in 2015 about the pub. we were looking at the pub interior as a positive example of privatized public space. we were quite interested in how pubs are embedded in british tradition; they’re the extension of people’s living rooms; they act as the modern day public toilet, yet they’re closing up and down the country. we were exploring how to rethink the pub in the 21st century into something that’s more than just a watering hole. and out of that, we became really interested in this network of privatized public spaces and how private and public work together across the UK.

often people think of privatized public space just as pubs or privately owned public spaces, like gray paved squares and new developments. we found that it’s actually much more nuanced than that, and it embodies things like the high streets and the garden square. then we questioned, how can we start to work both in private and public sectors to really open up public spaces so that everyone can use them? 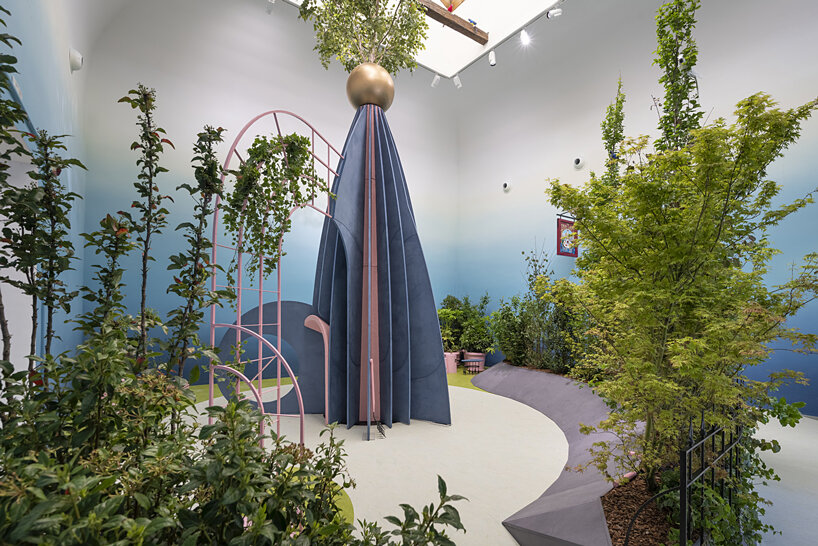 DB: can you tell us a little bit about how the garden of earthly delights  inspired the exhibition?

manijeh verghese (MV): the whole exhibition, the garden of privatised delights, was inspired by this painting by hieronymus bosch called the garden of earthly delights. as you approach the pavilion, you’re supposed to see this lush greenery to start to construct this garden of delight. we were really inspired by the triptych format of the painting and the two extremes of heaven and hell on either side, and then this middle ground of earth in the center. in our version of the painting, we looked at two extremes: the utopia before the inclosures act of the 18th century, and then the dystopia of total privatization. when you enter the pavilion, it’s like you’re entering that middle ground of privatized public space. we think that too often there’s this binary understanding that private is bad and public is good, but actually, it’s so much more complex and nuanced than that. 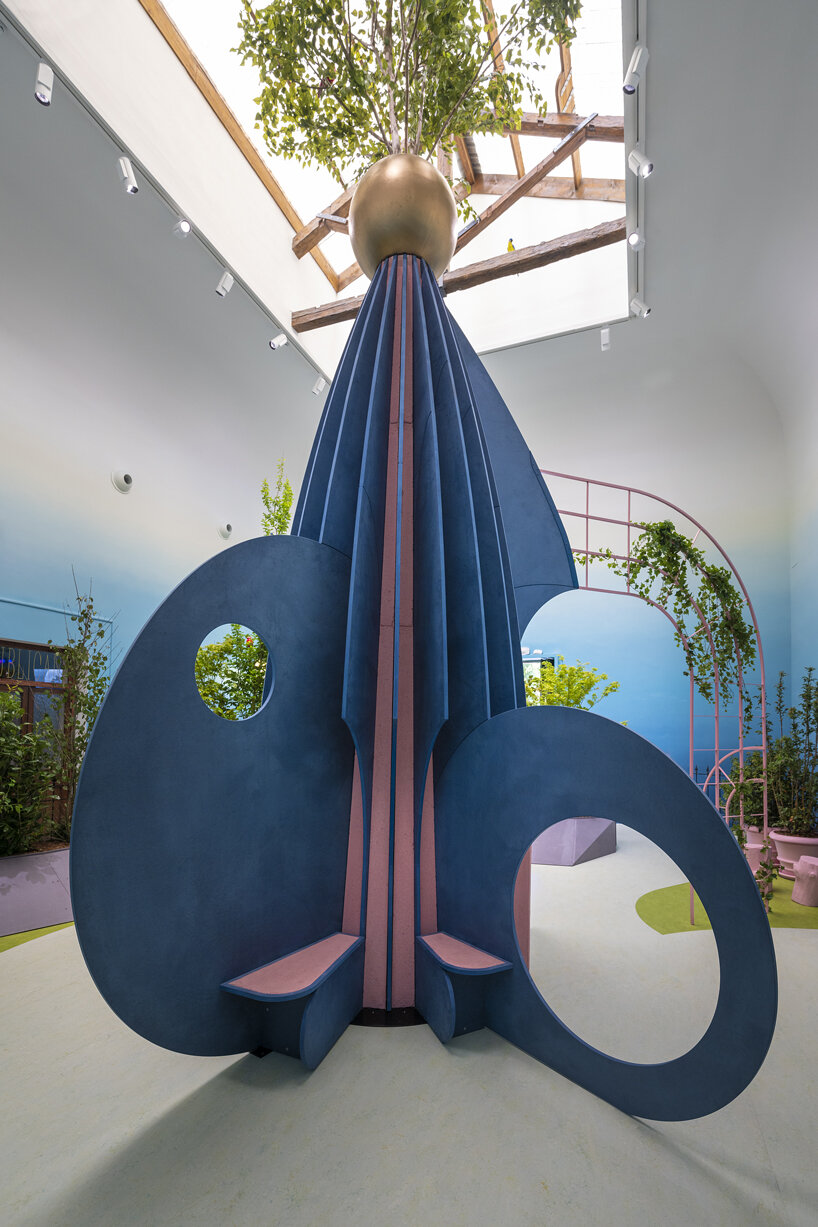 MV (continued): in the pavilion, we’ve tried to identify four existing privatized public spaces. garden squares as an example of exclusive green spaces that need to be opened up. the pub as a positive example of an interior privatized public space, but one that is under threat of being closed because of kind of lack of investment and also the need for kind of more diverse activities to happen there. the high street as a network of spaces that, due to retail moving online, is facing more and more closures. and then the youth center or spaces for teenagers in the city. we asked, how can we carve out spaces for teenagers to occupy on their own terms? 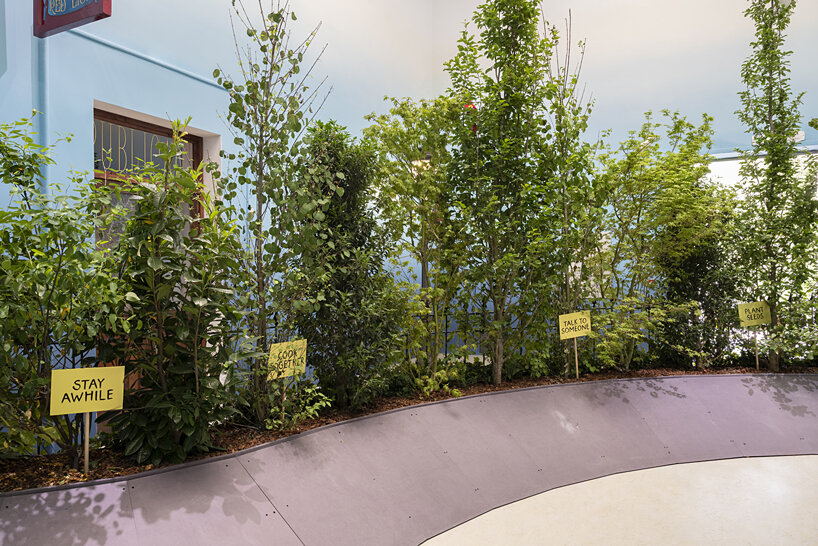 MV (continued): along with those four spaces, we also have two proposed government ministries, and they look at a more bottom-up approach to decision making about tangible things like land, on the one hand, and then intangible things like data and how our data is captured in the public realm. so those are the six rooms and then we have a surprise seventh room in the basement: the public toilet. the british pavilion is the only pavilion that actually has toilets in its basement and we were quite keen to open that up and put it on display. we were unable to make it accessible to the public because of italian building regulations so instead, it’s on display through a window that you can see from the exterior as a way to provoke questions about why these spaces exist, but no one can use them. 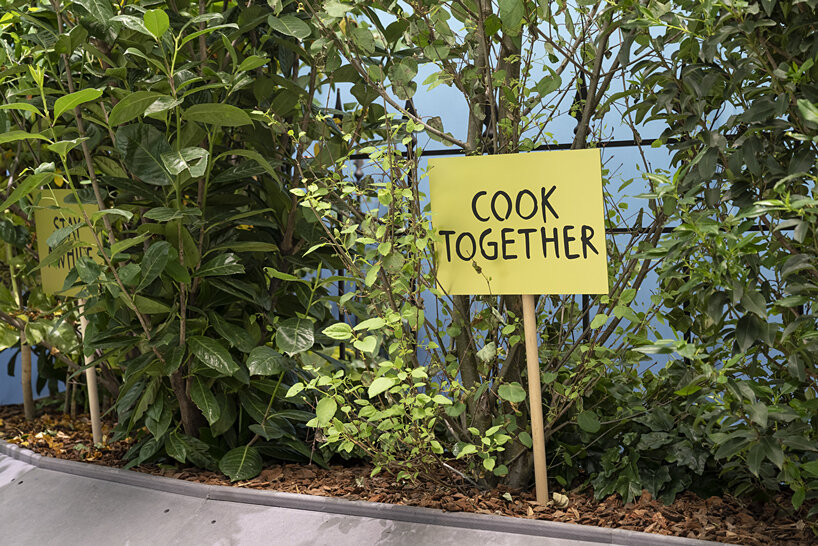 DB: what can visitors expect?

MK: in terms of the experience of when you enter the pavilion, you enter into the garden square and you’ll immediately be confronted by the railings of the garden square. you can see there’s something happening beyond but you can’t actually access it. it kind of sets up the whole problem with privatized public space and that it can be completely inaccessible to people. you’re forced to walk around the rest of the pavilion before you find yourself back inside the garden square at the end. there’s a kind of garden path that you follow throughout the exhibition, and you can wander off the path or you can keep following it. eventually, you’ll find your way back into that square. 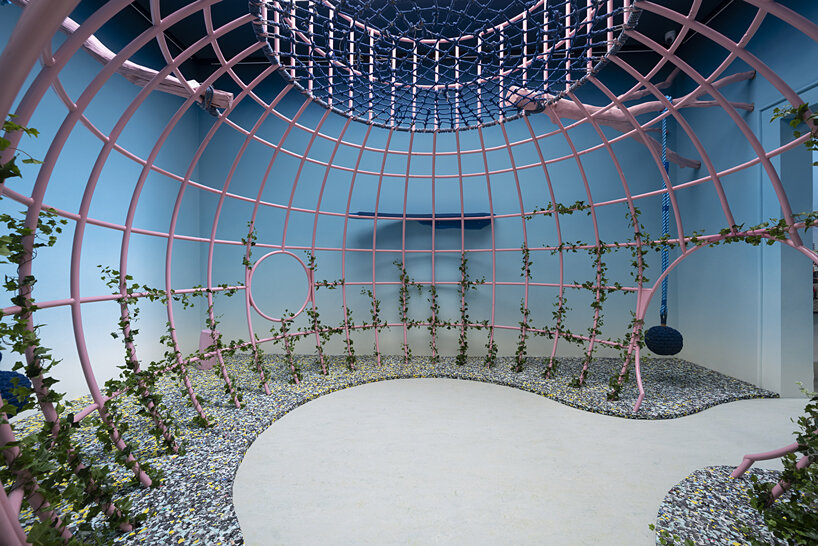 DB: how did the coronavirus pandemic affect your approach to the exhibition and to this issue of private and public space?

MK: these are all topics that we thought were important already, and then the pandemic really highlighted the importance of access to public space. each one seems to have been brought even more into the limelight of why it’s so urgent that we actually address these topics, that we rethink what our high street is, that we save our pubs, that we do provide spaces for young people. very early on in the lockdown, access to green space became something that was really important and I think it’s really exciting now that these topics have been spoken about and also that everyone’s become so much more aware of their surroundings. it’s a conversation we’ve always wanted to have, not just within the architecture world, but it’s felt like a very important one to bring different stakeholders around the table: from community groups to landowners, to politicians. we’ve been doing that all along but over the past year, there’s been much more momentum and interest in bringing all these people around the table to question, how do we actually open up our public spaces and make them more inclusive?

we’ve felt like the public sector has become slightly less risk-averse, which has been quite a positive change. and as a result, they’re willing to test ideas a lot faster. we’re actually quite hopeful that a lot of these ideas can now be tested much faster, and start to evolve in order to make our public space more inclusive. 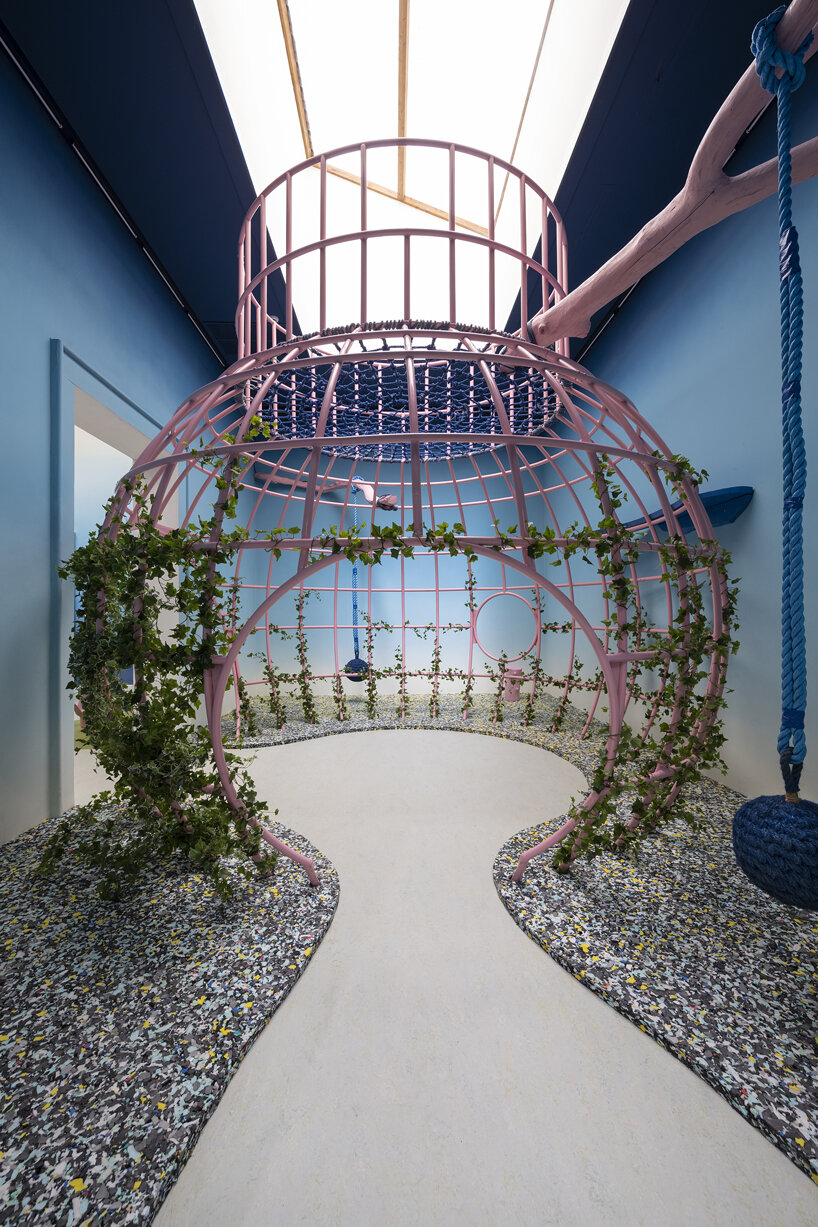 the framework is inspired by hieronymus bosch’s triptych

MV: on the one hand, I think it’s really highlighted the urgency to address these issues, and on the other, a lot of these spaces are under more threat than ever before. it’s unclear how many pubs and high streets will survive after extensive lockdowns, but then there is a renewed sense of energy behind opening up public spaces or privatized public spaces and finding new ways to fund them and maintain them. I mean, outdoor space specifically was the only space we could safely come together in the last year.

it’s given us a renewed sense of purpose in this topic as well. I think there will be new challenges as we go forward and see what the new reality is that we emerge out of this into. 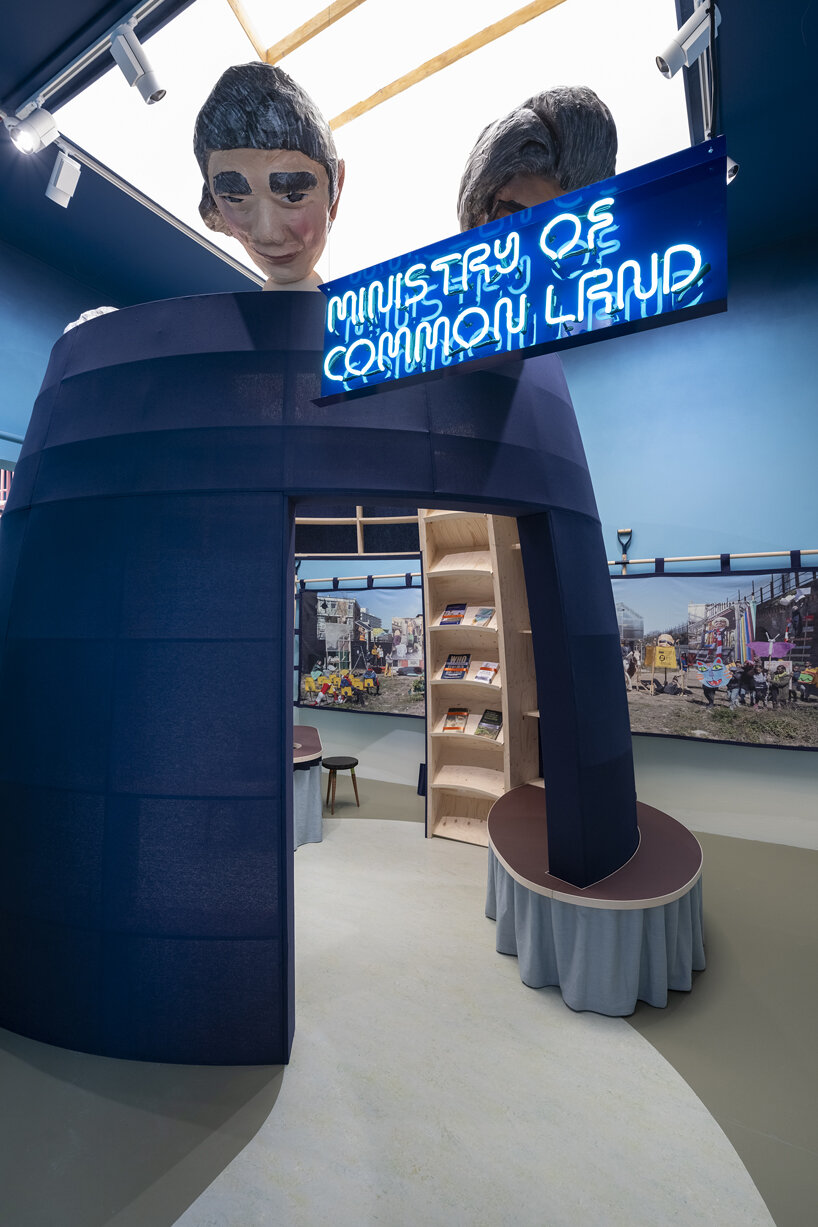 DB: what’s the main message you’d like people to take away from the exhibition?

MV: we want to provoke more questions than necessarily just tell people what to think, but this idea of delight was really exciting to us in bosch’s painting and it’s something we tried to translate into the design of privatized public space. so, the question we want everyone to leave the exhibition thinking about is why can’t all public spaces be designed as gardens of delight? and we hope that it’s a theme that sticks with people as they walk away.

MK: in fact, on the bench outside the pavilion, we’ve got a little plaque engraved with that message. 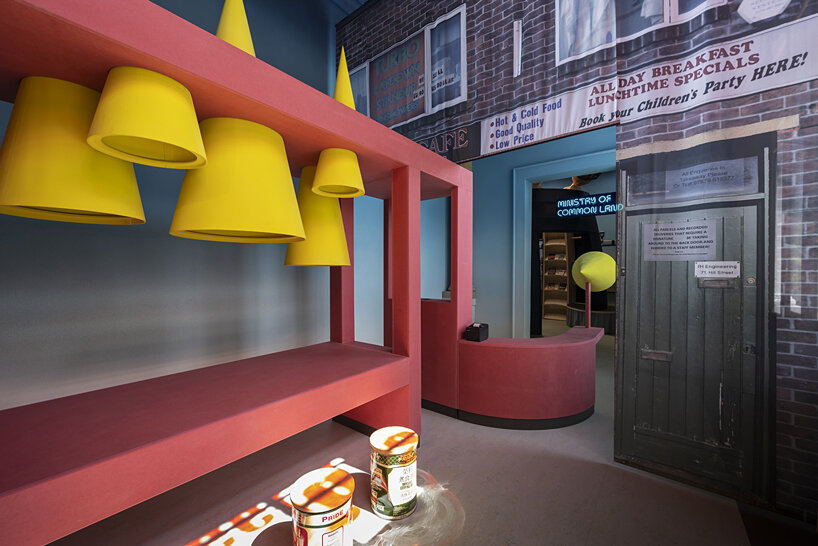 visitors to the 2021 british pavilion will find a series of playful and engaging installations, all against a dreamy blue gradient landscape. at the heart of the exhibition is the garden of delights, which was designed by unscene architecture to question how exclusive garden squares could be opened up for public use. to create the other rooms, verghese and kessler worked with the decorators, built works, studio polpo, public works, vPPR architects. the project includes surreal and familiar spaces such as play with(out) grounds, which asks how to design spaces for britain’s often overlooked youth, and the ministry of collective data, which rethinks facial recognition tech for public benefit. this year’s british council commission for the british pavilion, the garden of privatised delights, is at the biennale architettura, venice from may 22 – november 21, 2021. 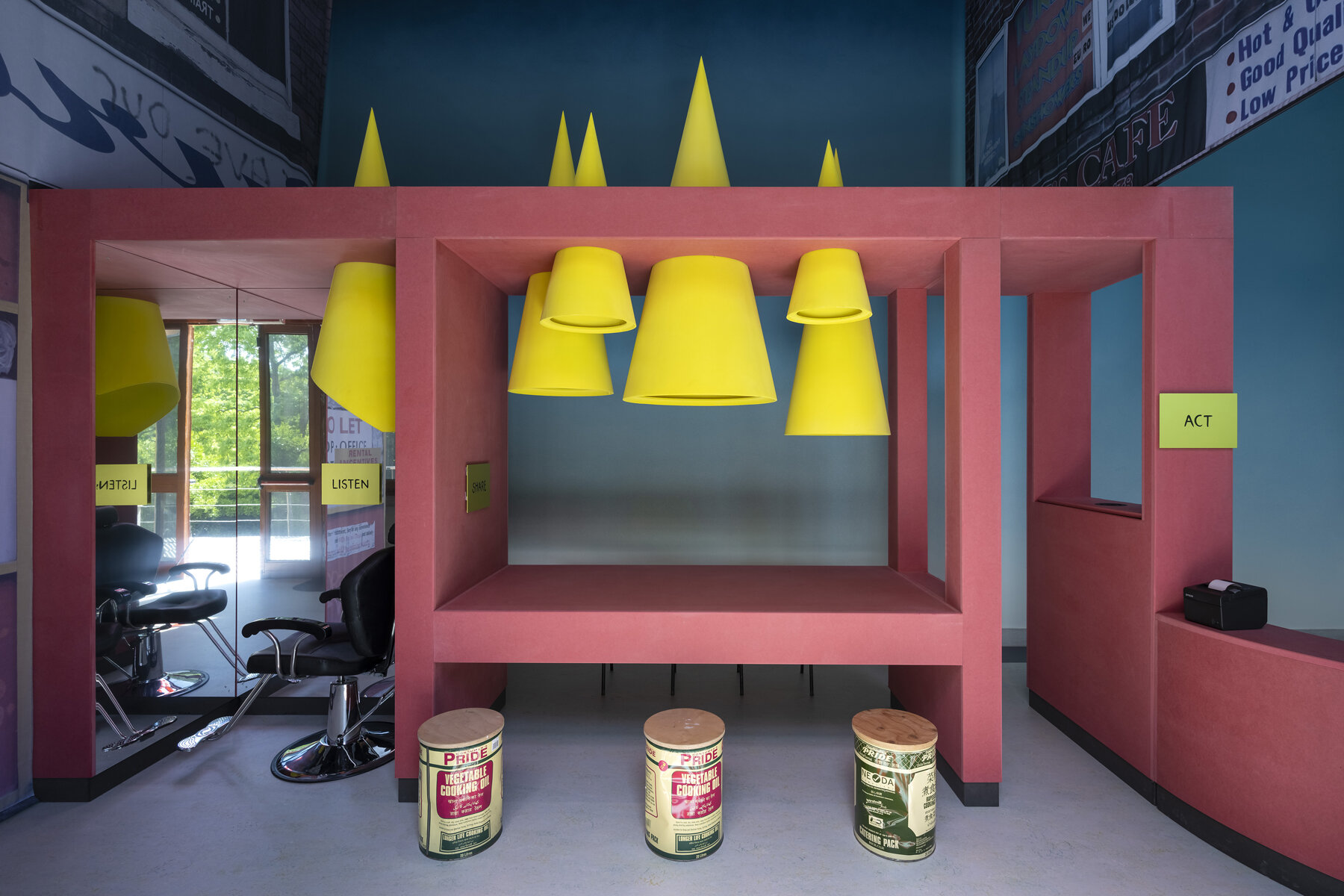 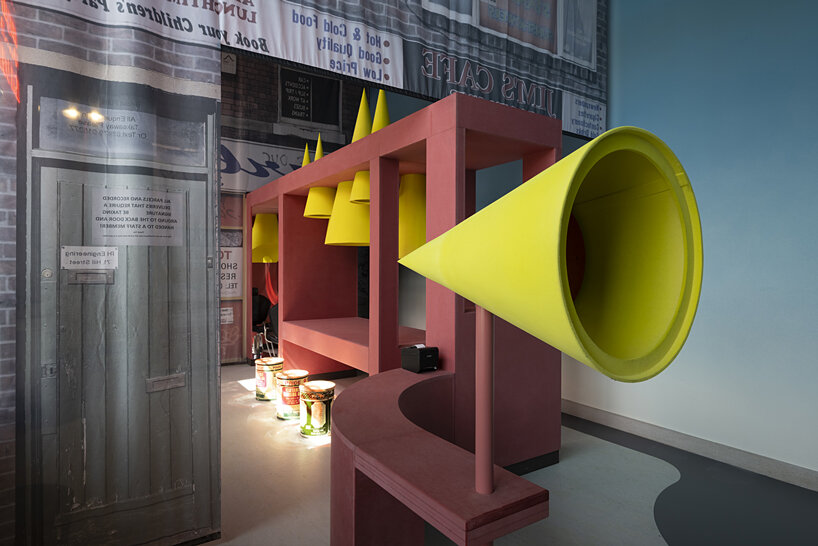 highlighting the importance of the high street 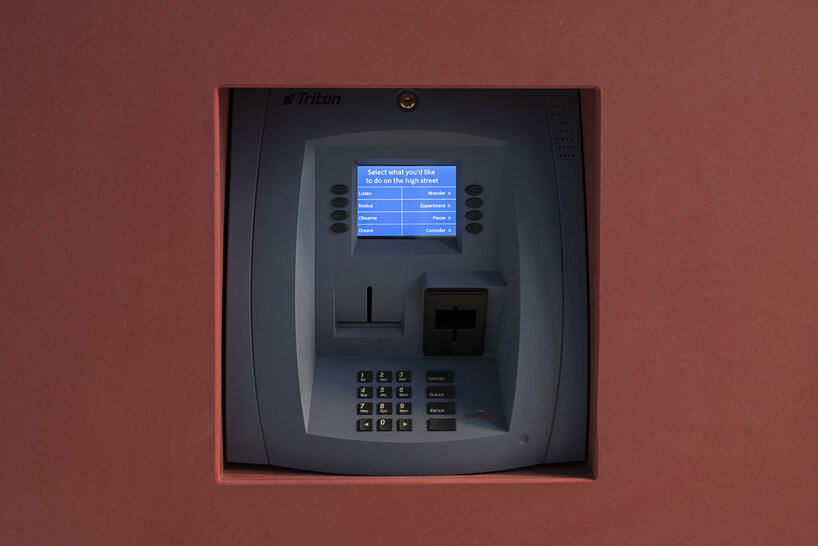 an ATM that dispenses advice, not money 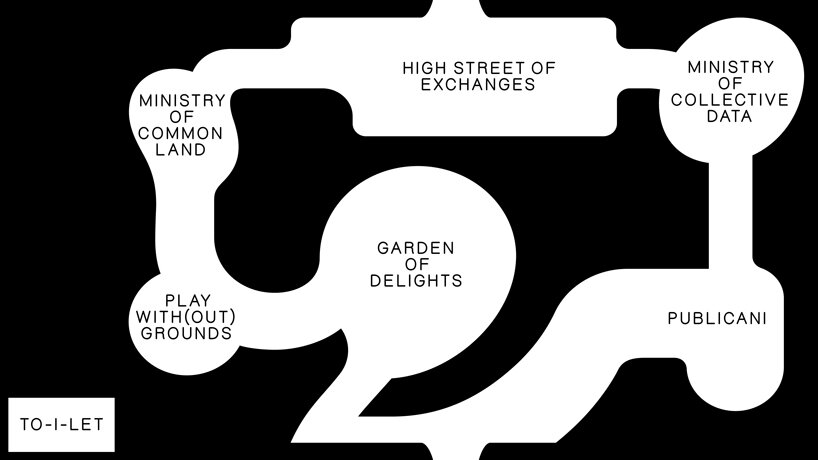 map of the garden of privatised delights

a sign from the joiners arms, a london pub for the LGBTQ+ community that was forced to close image by cristiano corte © british council

name: the garden of privatised delights 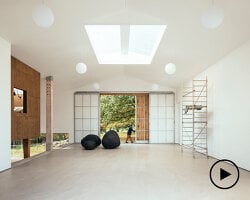 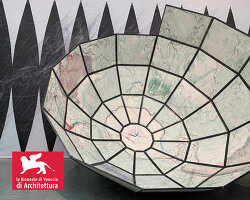 Jun 02, 2021
the world turned inside out calls for an 'unexploring' of the earth at venice biennale 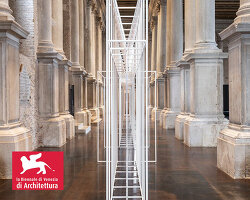 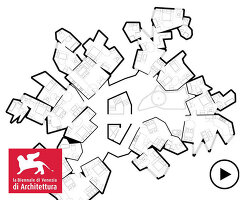 May 30, 2021
watch computers design houses with an interactive layout algorithm at venice biennale