Architecture practice BUREAU designs ‘Therese’ as a liveable sculpture and an artist’s residence in the middle of the woods of Sergy, France. From the outside, the temporary wooden residence is shaped like the tip of a pencil and a pyramid with a ship window to confer the resident a view of the forest outside. The small space peers through the growing trees surrounding the humble architecture, but the wooden exterior was only the beginning of the design phase.

The team – comprising Daniel Zamarbide, Carine Pimenta, and Galliane Zamarbide – takes their design cues from the writings of the Swiss novelist Charles-Ferdinand Ramuz. ‘This plot gave birth to Antoine, a peculiar architectural creature that welcomes many nomadic inhabitants and nature enthusiasts since 2014, offering them shelter inside the figure of the boulder. The story continues, becoming a short series with the appearance of a new member, Thérèse,’ writes Daniel Zamarbide. 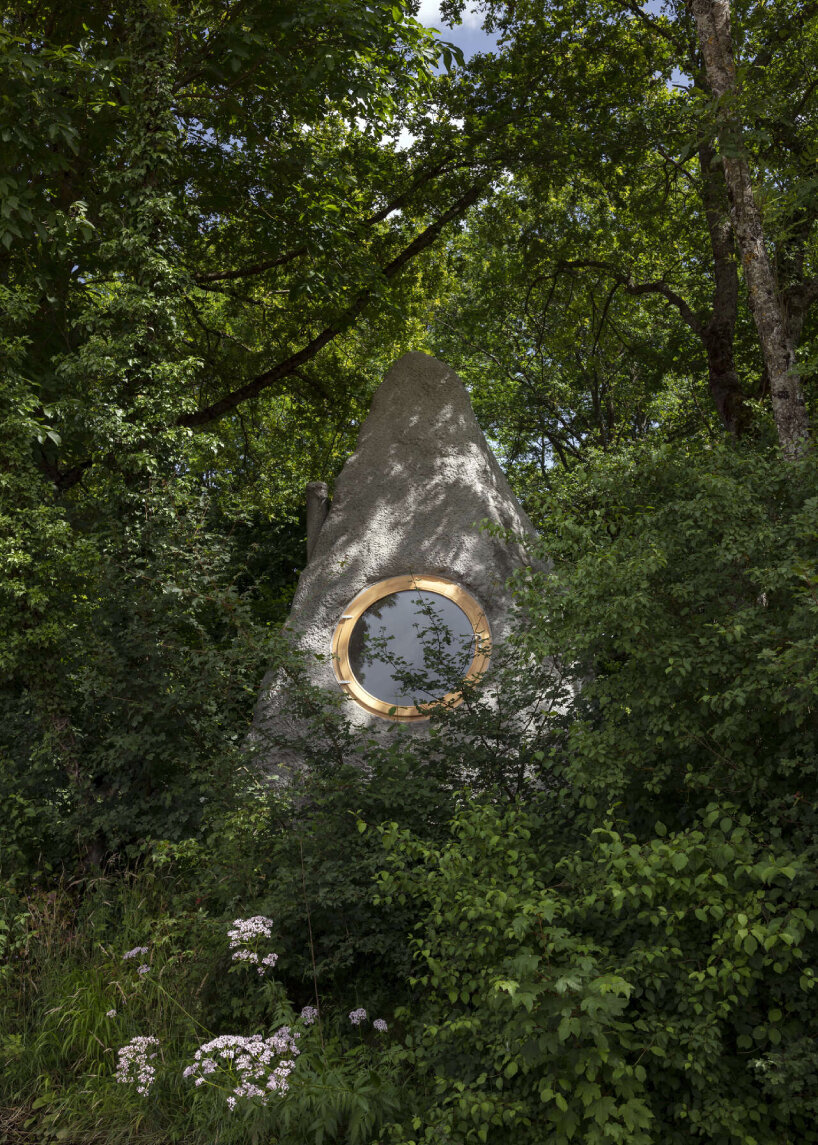 The interior wooden architecture houses two wooden benches and a table for the sojourners to place their items and sit on. They are positioned adjacent to the ship window where residents can witness the natural light ascend and descend through time.

The design team installed a heating system on one side to warm up those who want to stay for a little longer. One way to put the context of the project is that holing up inside the liveable sculpture in the middle of the woods may arouse one’s sleeping creative senses. 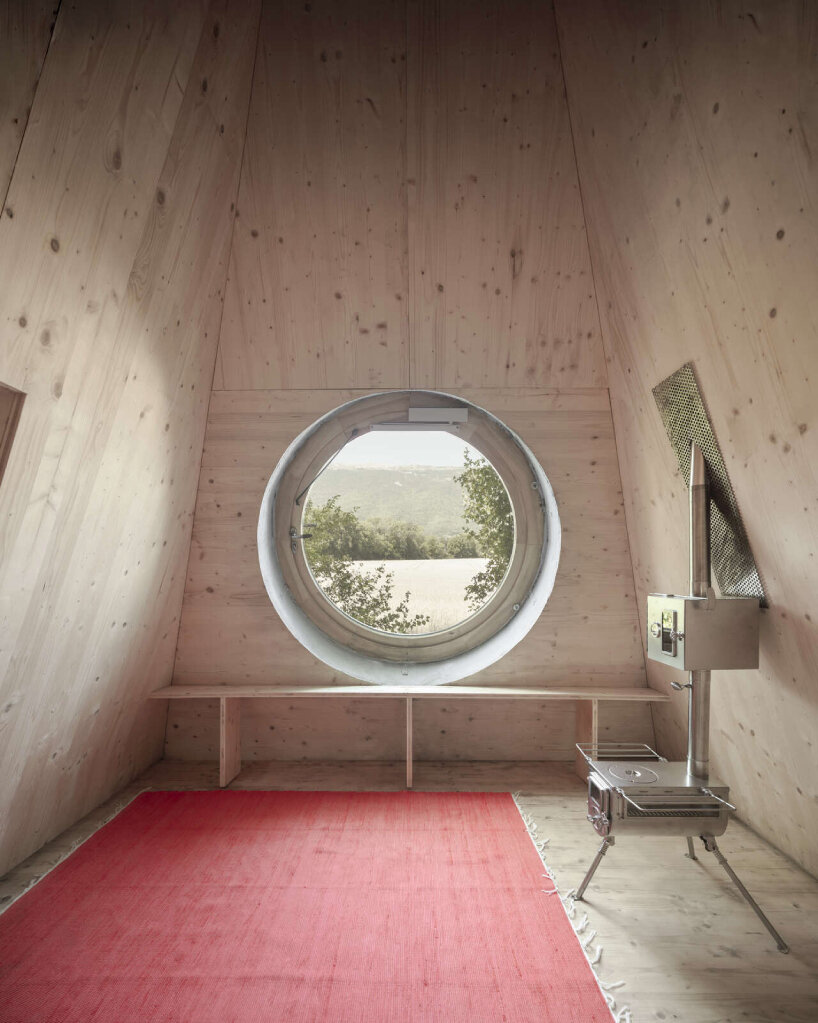 Slowly, the tip-of-the-pencil form of Therese by BUREAU morphed into a cone and rocky architecture that suddenly emerges from the woodlands. The history behind the approach lies in Ramuz’ writing which inspired the design team.

‘The novelist Ramuz gave a fictional life to the three characters. In their literary existence, they were thrown into a historic, tragic moment for the Swiss mountains that actually occurred in 1714, in the village of Derborence, as a major rock-fall from the Diablerets mountain range killed 15 people and hundreds of animals.

The husband, wife and uncle invented by the author inhabited, from the very beginning, the space of the novel and occupied the imagination of many readers. They have also, over the years, established themselves as cultural landmarks in that region of Switzerland: the novel is part of a regional and historical mountain culture,’ says Zamarbide. 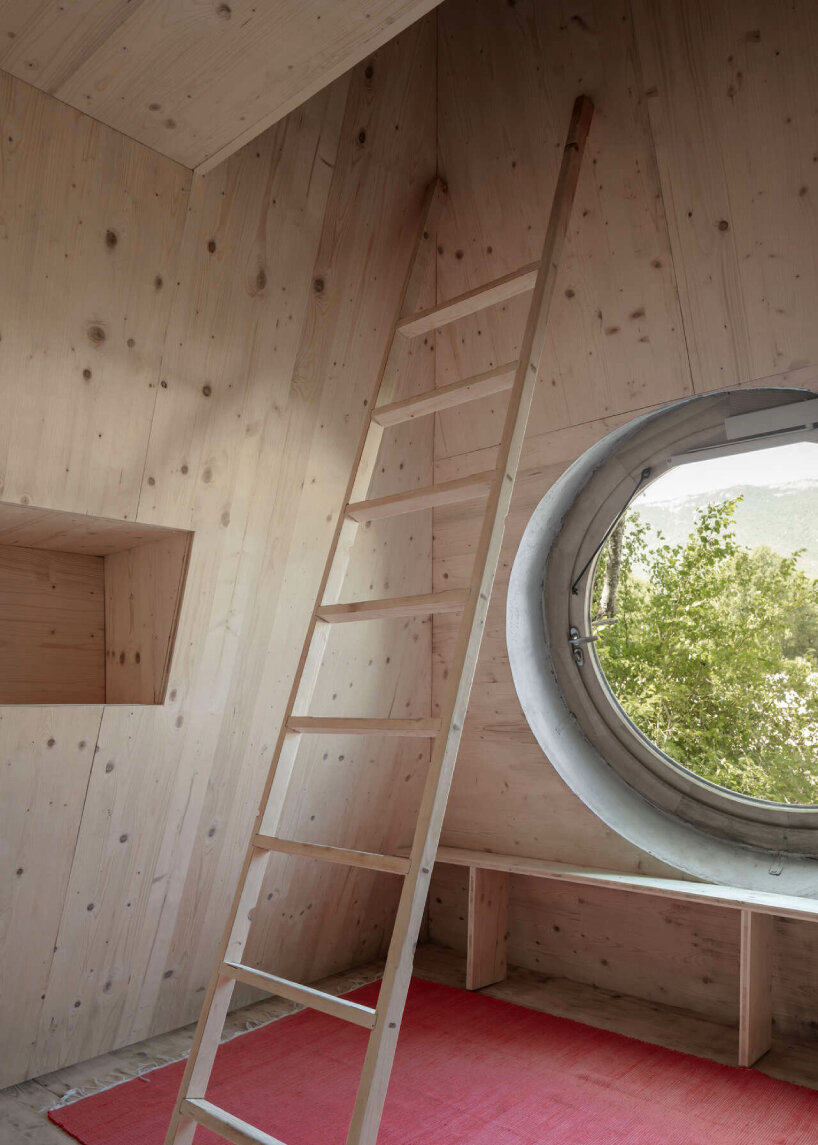 From this narrative, BUREAU added a new layer to the fictional story by manifesting the descriptive texts into actual property. The novel’s characters wear a new hat into the real world as they become physical realities with non-human forms. They are turned into a wooden foundation hidden beneath the rocky exterior that offers a respite to anyone who seeks time away from the noise.

‘Thérèse is part of a territory constituted by networks of interconnected influences and affinities on which we depend, understanding the territory we occupy, but also a series of relational co-habitations. Habitation is political in this area, as the two shelters are nowhere near commercial or speculative routes or agendas. They offer a place to many outside of any financial or economic considerations, assuming their modesty,’ writes Zamarbide. 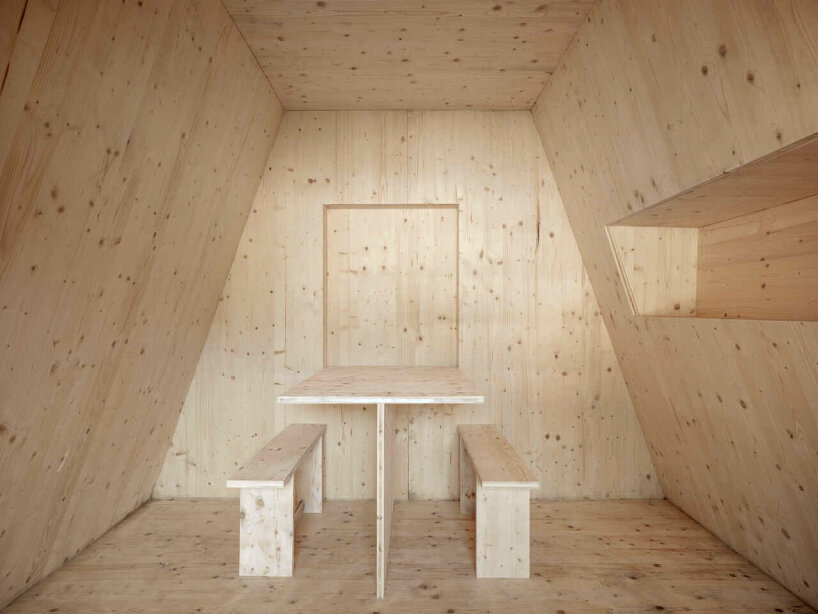 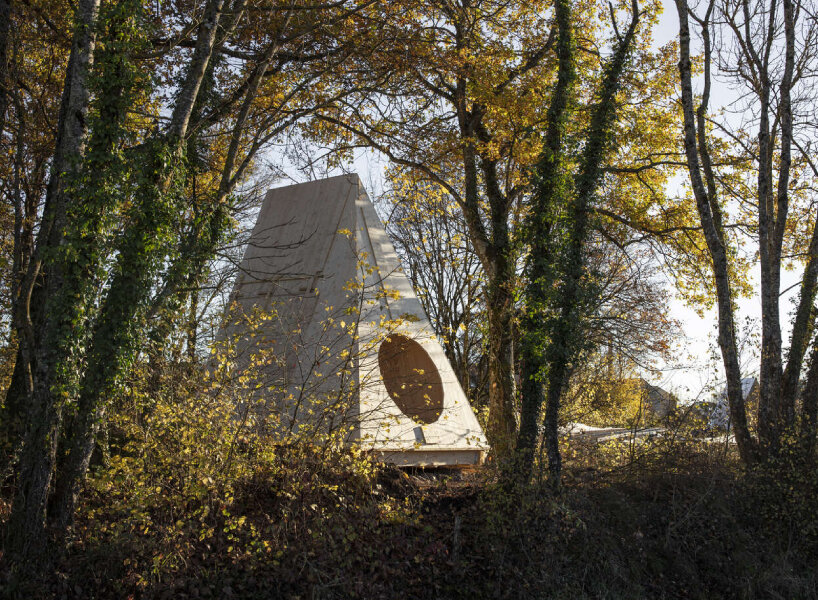 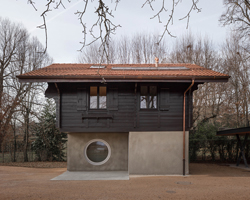 Jun 20, 2019
'mr barrett's house' by BUREAU is designed from the inside out in geneva 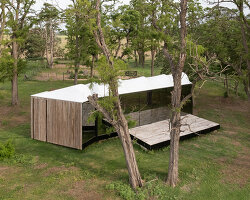 Jan 25, 2023
DUB arquitectura tops its 'atelier-A' with an undulating roof of translucent fabric 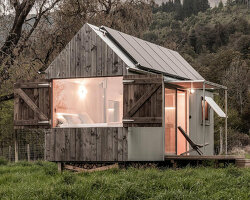 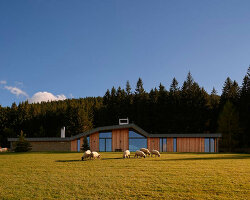