cheungvogl‘s new redeveloped underground system in south korea will receive large numbers of visitors in form of commuters through the connection to the existing metro stations and will benefit the subway system with the convenience of newly created interlinks between stations and different subway lines. to develop the system further, away from a mere thoroughfare to an integral part of seoul’s city life, the underground system will have to connect and open up to central nodes within the urban grain, creating places of urban, cultural and social relevance and interest, which will result in transformation of the city’s streetscape in these areas and beyond. the new underground public layer will largely depend upon the simultaneous activation of the overground. 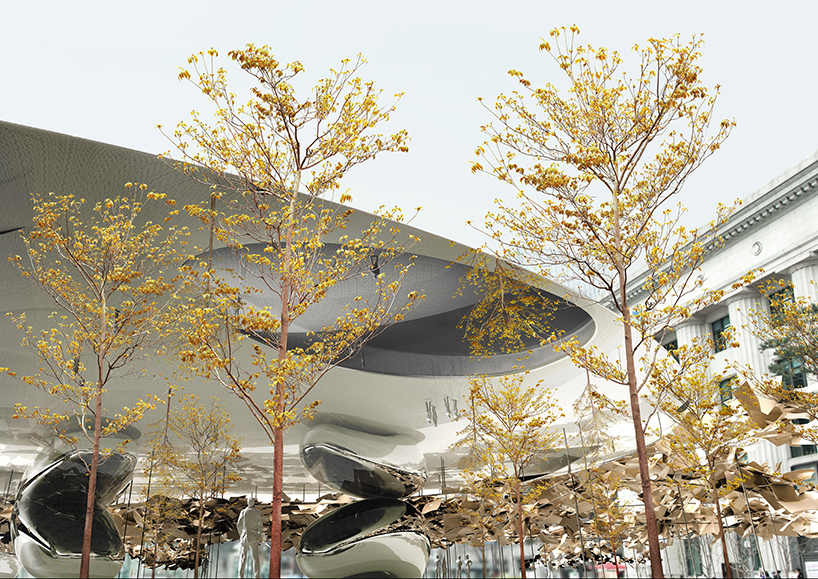 the aspect which generally separates underground spaces from the streetscape most is the lack of visual and physical connection, which amplifies the disconnection into a psychological barrier. the introduction of a sculptural installation that abstractly identifies the footprint of the underground space on street level, creating an intermediate zone between the inside and outside while establishing landmarks at strategic intersections, indicating the existence of the underground network and offering orientation in form of destinations and attractions from afar. hong kongese based design studio cheungvogl‘s intervention of shinseoul physically connects the site with hoehyeon, myeong-dong and city hall while creating a visual connection through major and minor streets surrounding the site, creating a gravity field towards and into the new underground public layer extension. 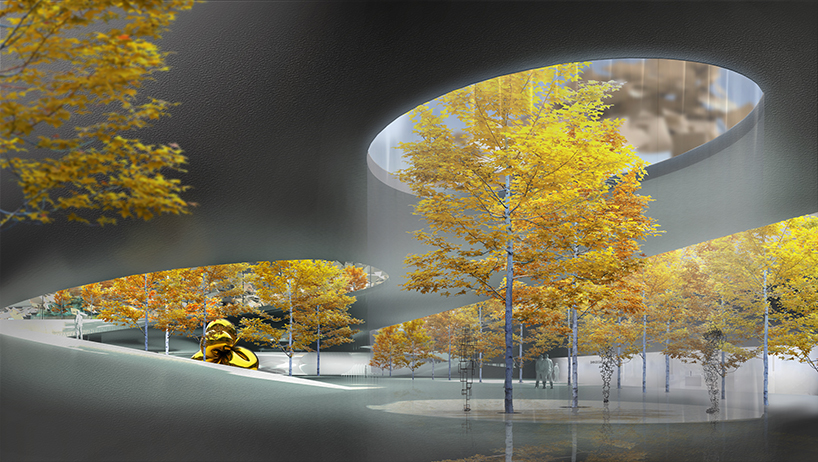 the street level gently unfolds into the underground spaces, unifying the different levels by gentle undulating landscape, which naturally creates a continuous connection between the layers and stands in stark contrast to the building masses surrounding the site. the transitional layering overcomes both, the physical and the visual disconnection between overground and subterranean levels and extends the cityscape seamless into the new development, where gentle slopes continue to mediate between different levels. at central nodes, the ground is punctuated with openings of different sizes to allow daylight and natural ventilation to extend the city squares into the public layers below street level. the main aim is to connect the underground with the overground on its path beneath the city at as many points as possible through openings of circular ramps, which do not only provide physical intersections, but also visible connections to truly merge the public layers of the city. the vertical intersections become natural light filled spaces and extension to the streetscape. 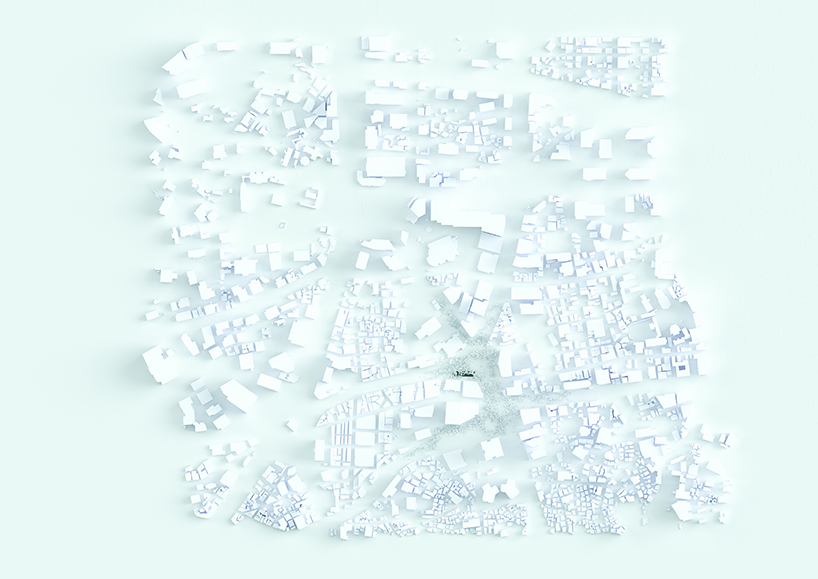 the underground layer of seoul is not a replica of the street level above, but an extension to the city life, which as in any healthy and holistically grown urban context covering all aspects of life. city planning is not only a reflection of the inhabiting society, but the main influence on the community as a whole as well as on the individuals. the long-term success of the development is highly dependent upon the positive activation and interaction with its existing context and sensitively balancing the economic figures, social and cultural relevance and communal needs. 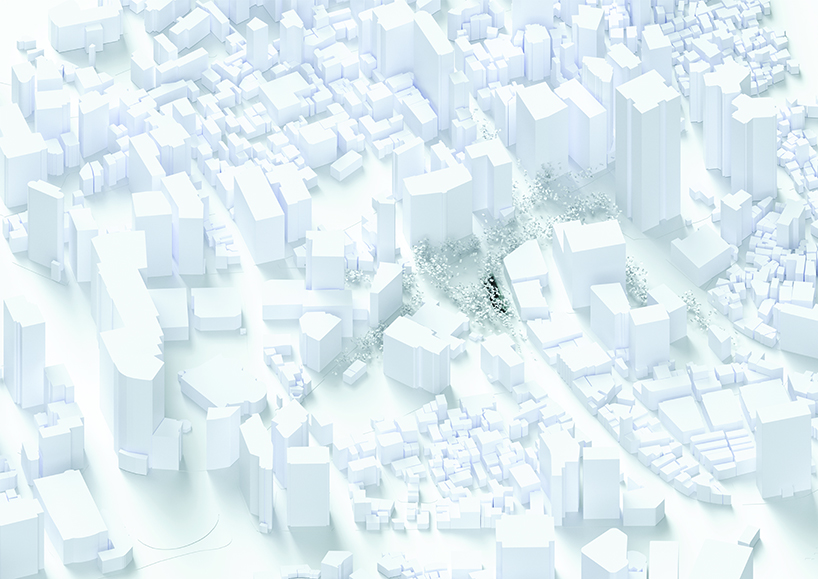 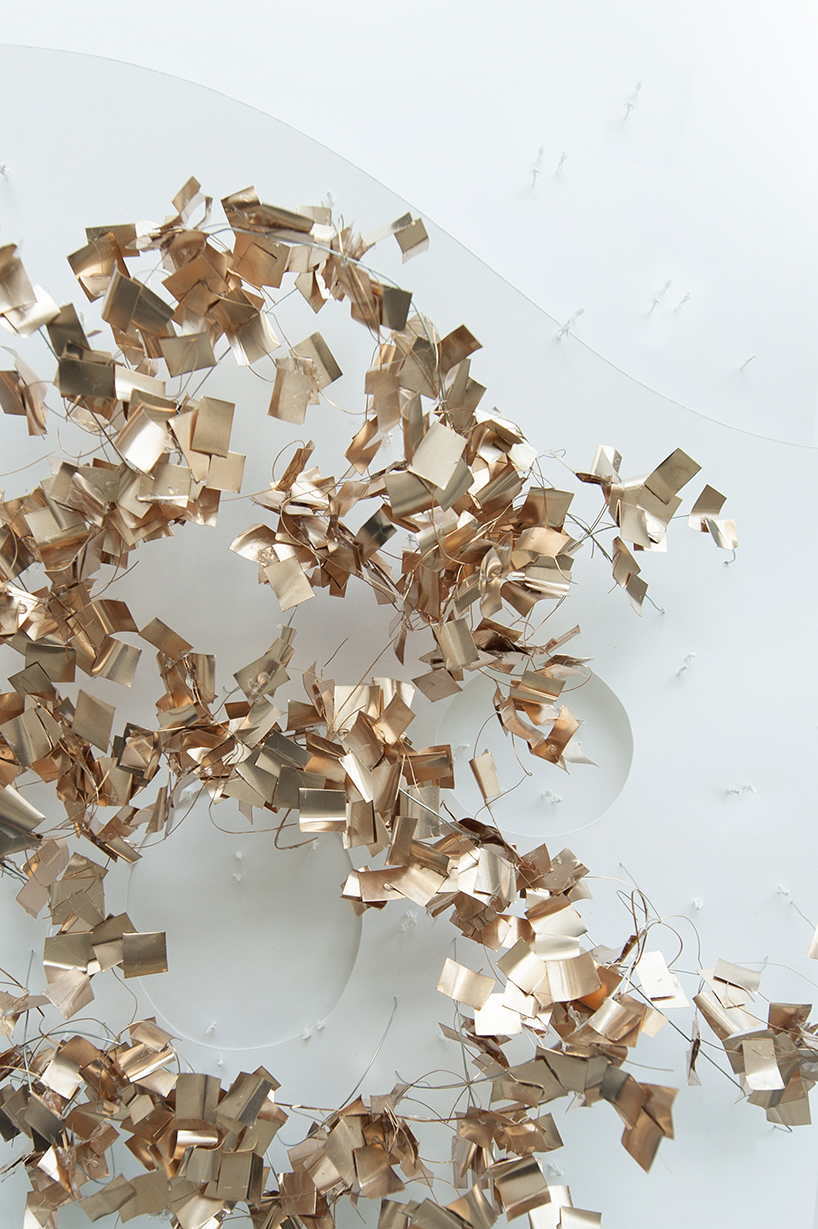 at street level an urban installation of paper-like sheets create an ambiguous layer, hovering over the city life 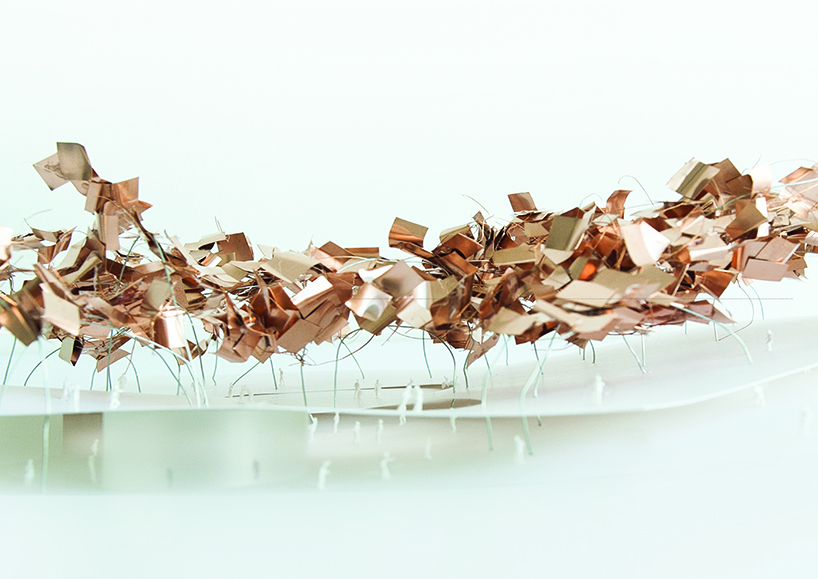 the street level gently unfolds into the underground spaces, unifying the different levels 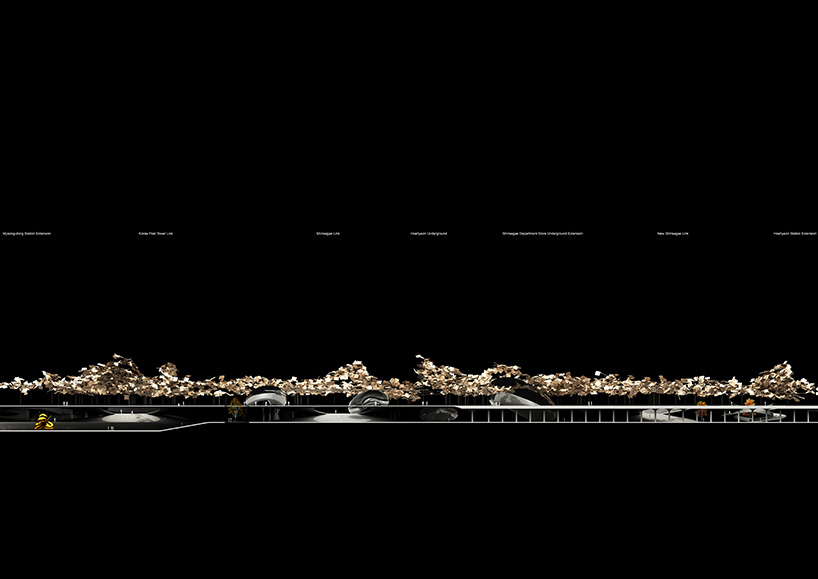 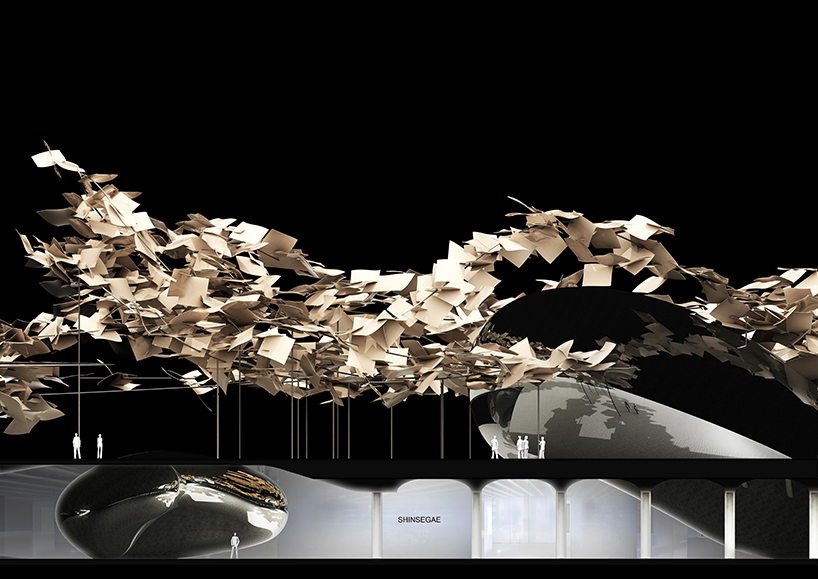 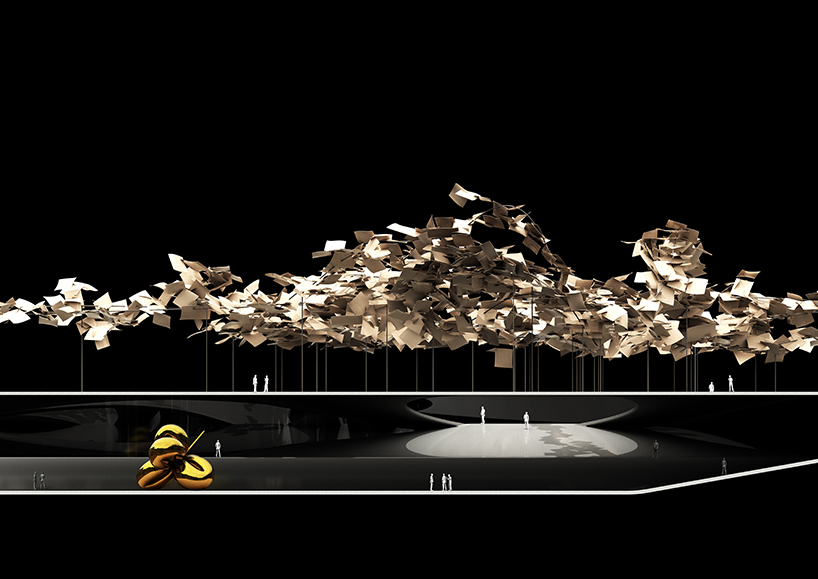 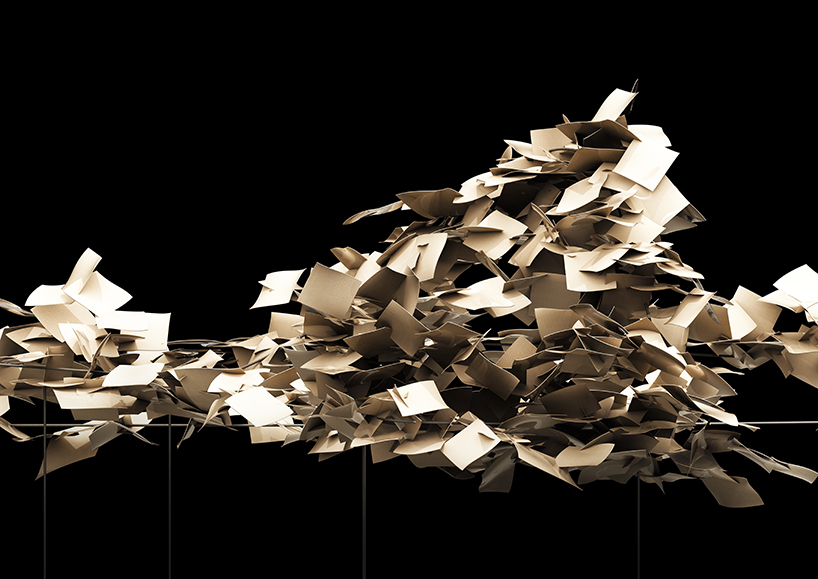 the installation becomes an urban incubator 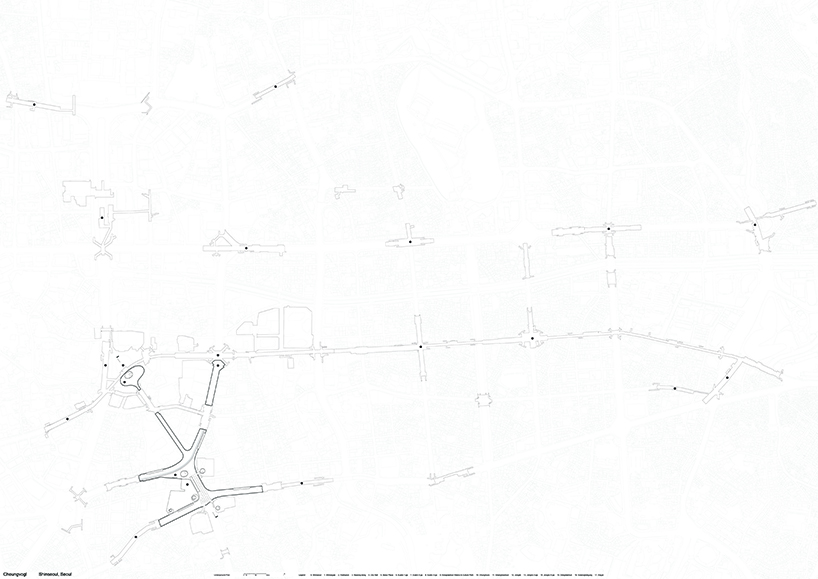 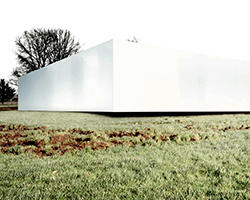