the city of dubai presents itself as a collage of amalgamated large-scale developments. vigorously convincing the world of how to build forms conveying technological power and growth, today, the challenge for the quickly developing metropolis, is to balance the rapid development to a more considered and grounded city.

in response to this idea of building a successful city in which people can develop, network, consolidate and compete on a global platform, hong kong-based architectural office cheungvogl (judy cheung and christoph vogl) has designed a new library space in dubai. the project focuses on the need to provide a place in the city of dubai for people to pause, reflect and contemplate. 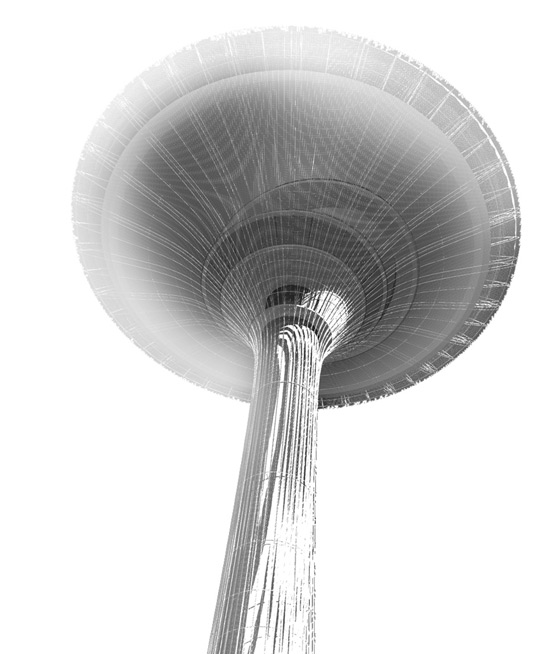 looking up the wire mesh construction to the top platform

the structure of the sheik zayed library is deeply rooted in the ancient culture of dubai. respecting traditional disciplines and incorporating the the significance of organic forms, symbols and patterns, the design seeks to redefine traditions, as well as continuing to test new boundaries for the future. cheungvogl wanted the library to be a symbol within the city. its form is suggestive of a flower growing out of the desert ground.

the architectural duo looked at nature and plant structures such as bamboo as a source of influence, understanding their natural construction made by multiple strands of fibre, tightly knit together – the cross-section of the bamboo fibre and yarn is filled with various micro-gaps and micro-holes. scientific tests have proven that higher shear strength was observed for bundles of fibre having smaller diameters rather than larger ones. similarly, cheungvogl has applied a secondary thin layer of structural mesh which follows this natural formation of fibres, to ‘glue’ the primary structure together. here, the secondary structure – the skin of the façade – acts as a brace to the primary one which remains to be a filigree of thin elements. together, they become a series of load transporters, working together to transfer weight down into the roots of the tower – the foundation. 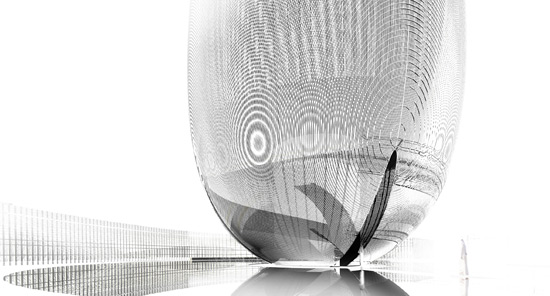 the foundation and mesh construction

the circular plan renders equality in many perspectives in terms of views and equal loads. the wind and seismic load is reduced in a circular form compared to a square or triangular form. a light mesh consists of primary and secondary steel members wrapping around the 7.7m diameter concrete core, supporting the huge cantilever slabs which form three levels of viewing platforms. on the top two levels, the structural mesh defines the space for the viewing platforms without entirely enclosing it. these spaces provide the visitors with 360 degree panoramic views of dubai at 165 meter datum. 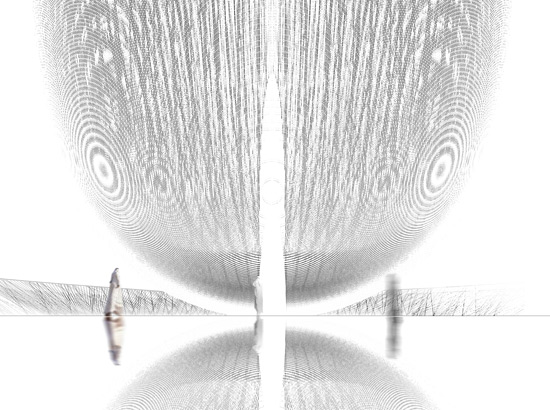 platform 0.00m DTM at the entrance sits on a sheet of reflecting water. one is meant to descend slowly through the thin cuts that mark the entrance at ground level, the entry signifying an inverted dome. platform 11.55 DTM provides an enlarged contemplative place for one to get close to the framework and where the tactile quality of the structure is part of the experiential quality within the space. here, the blur between the structure and the metal mesh provides a magical translucent quality that changes according to different times of the day. as one ascends upon the upper levels, the oval platform at 150.52 DTM allows one to look back upon time. viewing through the cuts on the floor, slabs get glimpses of the city from oblique angles. platform 157.85 DTM is expanded into three levels similar to a stretchable spring. it is a fluid gesture that describes the experience of travelling through space and time. at rooflevel, 165.50 DTM, the relationship between mind, body, space and city is amalgamated. a journey that is flexible enough to cater changes through time. 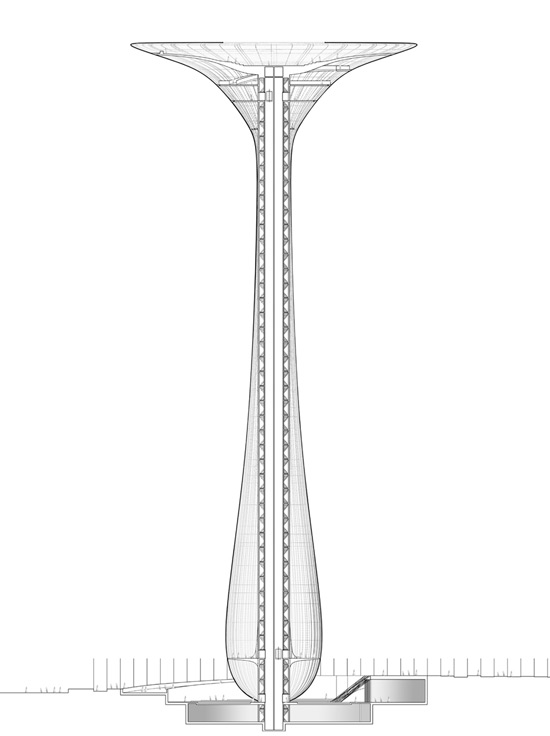 the 7.7m diameter structure is composed of two passenger lifts featuring helical stairs and a fire escape intertwined around it. the two sets of stairs are designed to be stacked on top of each other, maximizing the core’s efficiency. the circular plan is an ancient and universal symbol of unity, wholeness and infinity, representing the power of endlessness, and eternity. symbolically, the library is clothed with a white shawl, providing shade from the sun.

located at the periphery of the city’s urban corridor, the site captures the entire view of the city quietly from a distance. the library will stand in between many internationally recognizable forms that celebrate the commercial success of dubai city.

breakdown of the cirucular construction

one of the major challenges of the project for the firm was to examine and generate a new urban structure that is sustainable and sensible to those who inhabit these grounds. it is critical to recognize the existing urban spaces and render the site with a bold and simple gesture that is unique, resilient and supportive of local needs. the connection between the city and the existing park infrastructure has been seamlessly integrated, with the site grounds being distinguished by a field of bamboo trees with solar lamps within the landscape. the ground is a place that is slightly submerged, sheltered from the sound of the city, sandy wind and sun, creating a place that is naturally cooled by a thin layer of water beneath. the light web hovers against the edges of the site, supporting facilities such as a children’s library, conference spaces, providing a sustainable environment with different climatic conditions.

the overall design is an organic plan, responsive to evolving to the needs of its people: a place for interaction, cultural exchanges, quiet thoughts and documenting the notion of time. 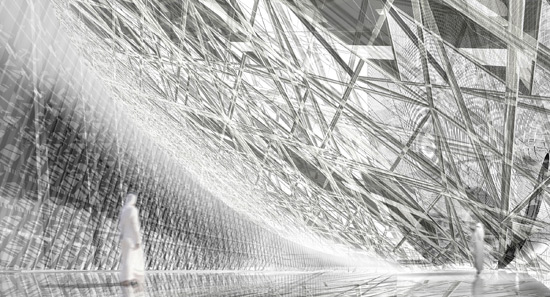 interior view of the mesh structure