at the chicago architecture biennial, pezo von ellrichshausen explores its ongoing interest in multiples. the chile-based studio, led and founded by mauricio pezo and sofia von ellrichshausen, underscores their embracement of art and architecture projects by organizing a monumental grid of 729 framed watercolor studies on the wall, demonstrating an almost mathematical obsession. the illustrated explorations depict the serial sequencing of an imagined building form that is half tower and half plinth.

designboom spoke with mauricio pezo and sofia von ellrichshausen about their contribution to the biennial, their response to the theme, and their amalgamation of art, architecture, and everything in between. 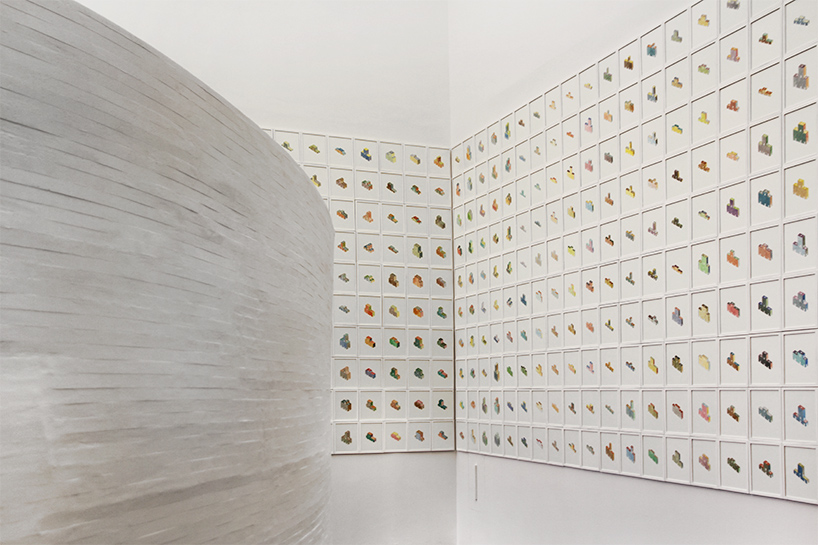 drawing from the long modernist tradition of architects that paint, pezo von ellrichshausen has realized a series of watercolor studies for the chicago architecture biennial in a seemingly random combination of 81 different colors. what appears to be an arbitrary arrangement of images is in fact ‘the systematic erosion of an ideal object, of an imaginary building, based on a prescribed set of rules,’ sofia von ellrichshausen tells designboom. the repetitive nature of ‘finite format 04’ suggests an influence from ‘serial art’ — a creative movement from the 1970s, which exhausted an idea or concept in a monotonous display. 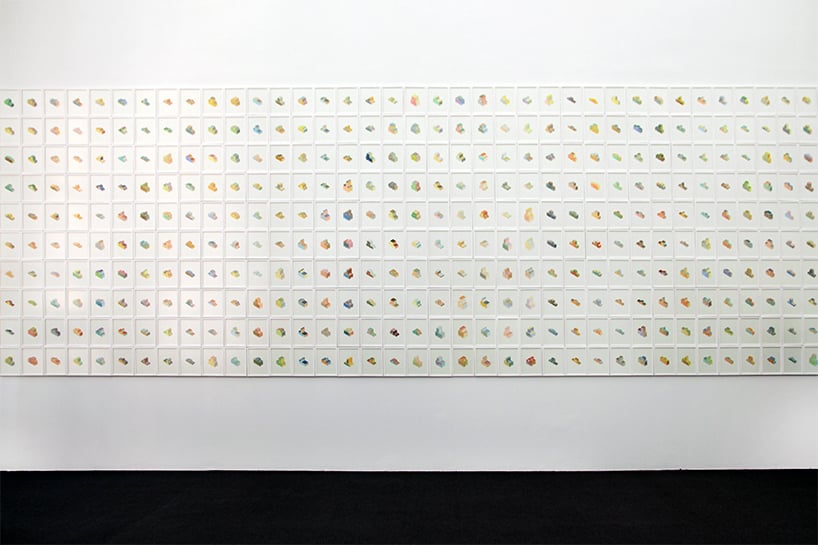 designboom (DB): can you talk a bit about what you are presenting for this year’s chicago architecture biennial?

sofia von ellrichshausen (SVE): it is a 3.5m height by 20m long polyptych composed by 729 individual paintings, of watercolors on paper, organized on a seemingly random chromatic and formal arrangement. what appears to be an arbitrary array of minor variations is in fact the systematic erosion of an ideal object, of an imaginary building, based on a prescribed set of rules. this is the fourth iteration of an ongoing series we have entitled ‘finite format’. 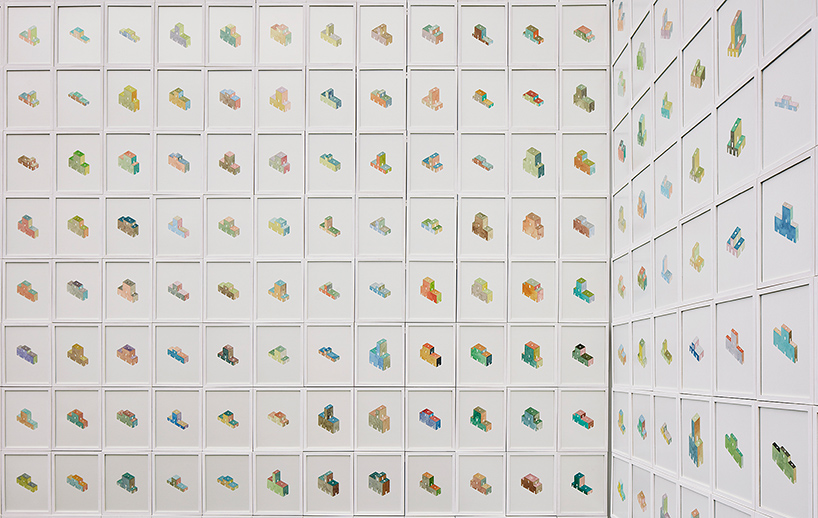 SVE (continued): it is a rather personal enquiry about the possibilities of a sort of ‘hand made’ formal determination in architecture. through a limited number of factors and dimensions we are studying how proportion is crucial for the understanding of character, disposition and identity of an architectonic piece. this comes from our interest in replacing the very notion of form by format. since it is a general outline, or a field of action defined by size and direction, we believe a format contains fundamental spatial attributes of a building. 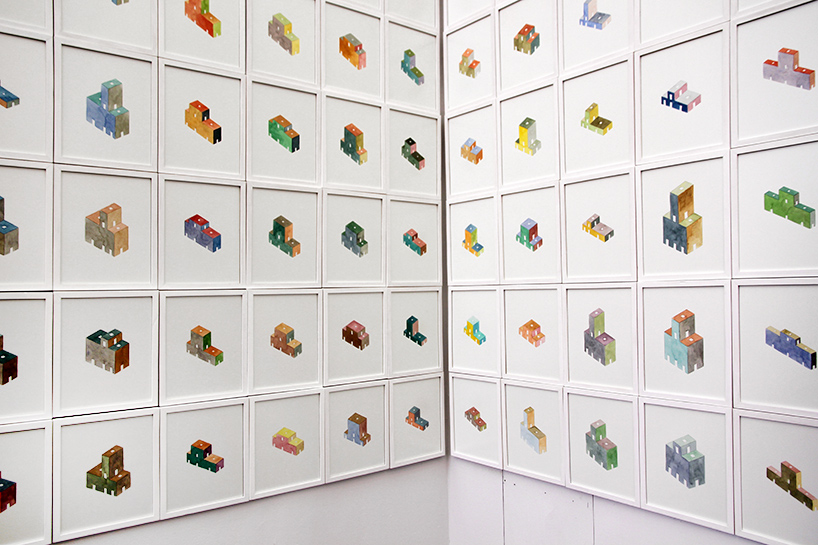 DB: how did you respond to the overall theme of ‘make new history’?

mauricio pezo (MP): since we never refer to anything beyond the building itself, and somehow assuming a tautological exercise, we are reading history as a wide source of knowledge. in our hypothetical approach, we are speculating with a potential idea of beginning, of the very moment in which history begins. of course, we are reading the call in conceptual terms, assuming history as a constructed fiction. we are indeed interested in basic and familiar forms. 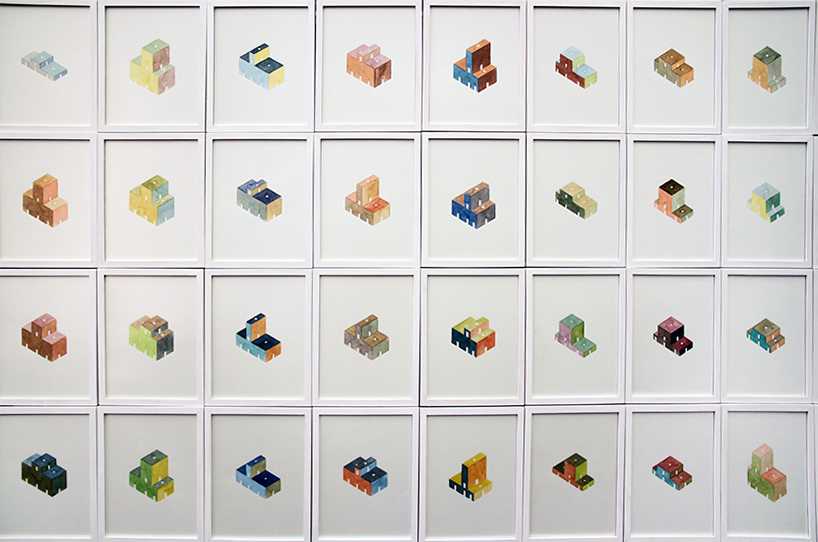 MP (continued): in fact, not so much in those architectonic structures that are the starting point of a typology but in those that concentrate the most characteristic features of a certain kind. in other words, not in a prototype but in the archetype, in the model, the original idea for a building. the history is right there, at the beginning of a formal structure but also in the systematic transference, as in the hereditary metamorphosis within the same family, from one figure to the next one. 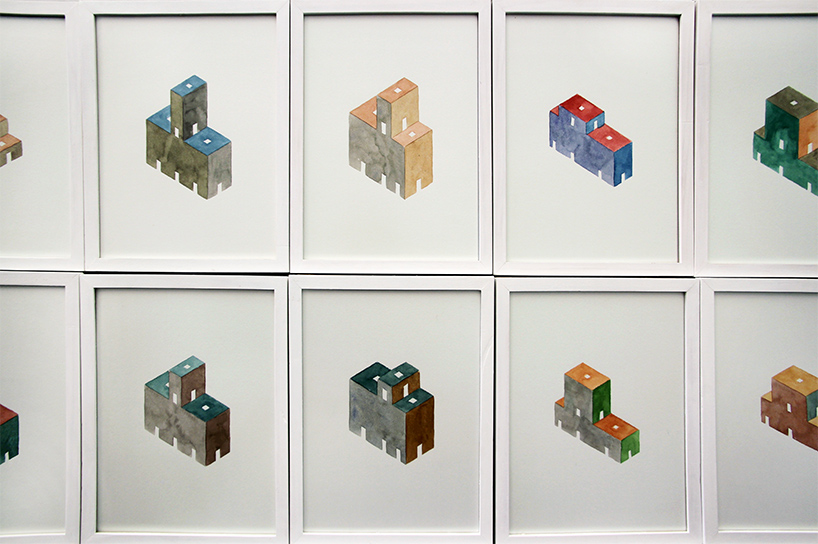 DB: in developing your contribution, how closely did you work with the biennial’s artistic directors sharon johnston and mark lee?

SVE: we have known sharon and mark for a long time now. I guess we have been exchanging ideas for many years, even before this official invitation. when they invited us, they already knew our recent work, both in art and architecture. although this is a new work, never exhibited before, they were extremely sensitive in giving this collection of paintings an adequate context. in abstract terms, they insisted in the relevant equivalence, or perhaps reciprocity, between building and representation, between an architectonic idea and its construction. 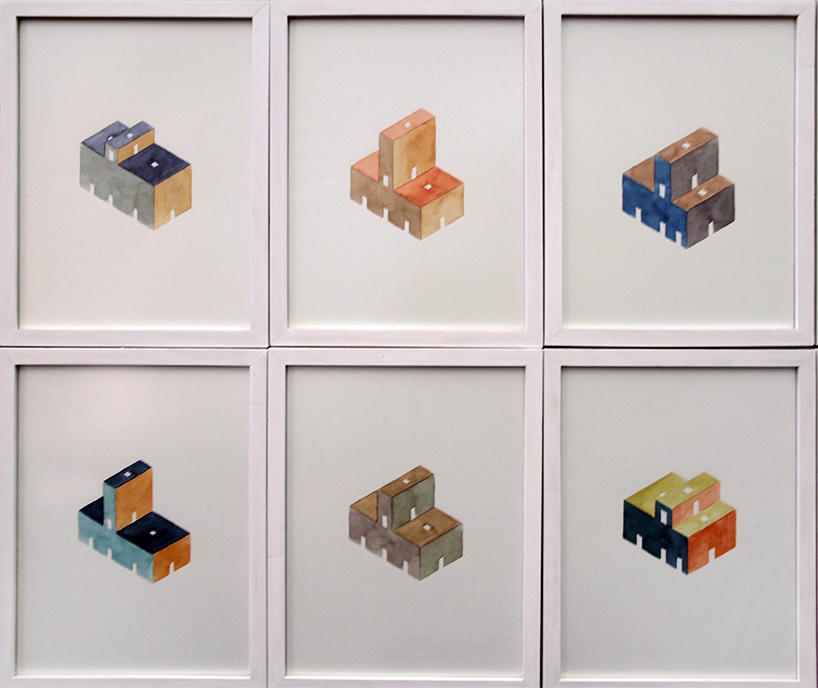 DB: do you enjoy creating temporary works for biennials etc., which have a potentially smaller and more intimate scale?

SVE: as much as we enjoy everything we accept to do. anyway, in our view, the scale of architecture has nothing to do with its size. this is a common misunderstanding; big buildings are not necessarily tackling the big scale, and vice versa. in fact, intimacy is a quality you might find in a massive, monumental structure. 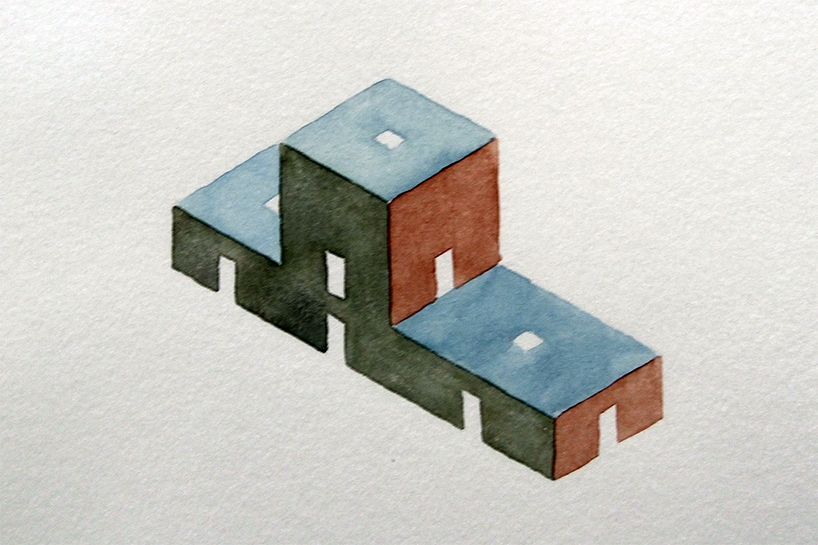 DB: do you think it is important for the general public to be involved in the architectural discourse?

MP: not really. they need to be informed if the effects of buildings, or their impact on a street, a corner, a neighborhood or the city at large. not so much about their authors intentions. the so called general public, or lay people, just live and enjoy or suffer the consequences of the architect’s decision. and not even those decisions alone but every one of the circumstances that he or she had to face to take those decisions. 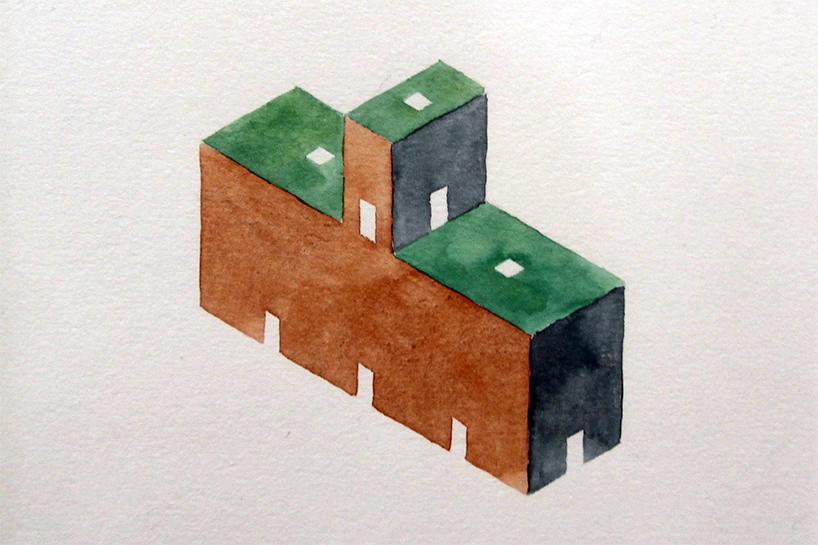 MP (continued): architectural discourses are fundamental for our disciplinary evolution, if evolution is what one is pursuing. they operate in a meta understanding of the current production, a sort of evaluation among peers, and later on as mere facts to be interpreted by historians. I suppose, the current architectural discourses are confusing popularity, market and politics. the social role of architecture is embedded in its function, both for individuals and collective dimensions. there seems to be a feeble line between the business of architecture and the good intentions to promote those businesses. I believe good architecture does not need to be explained.

DB: the biennial explores art, architecture, and everything in between. can you describe how your work covers different creative genres? 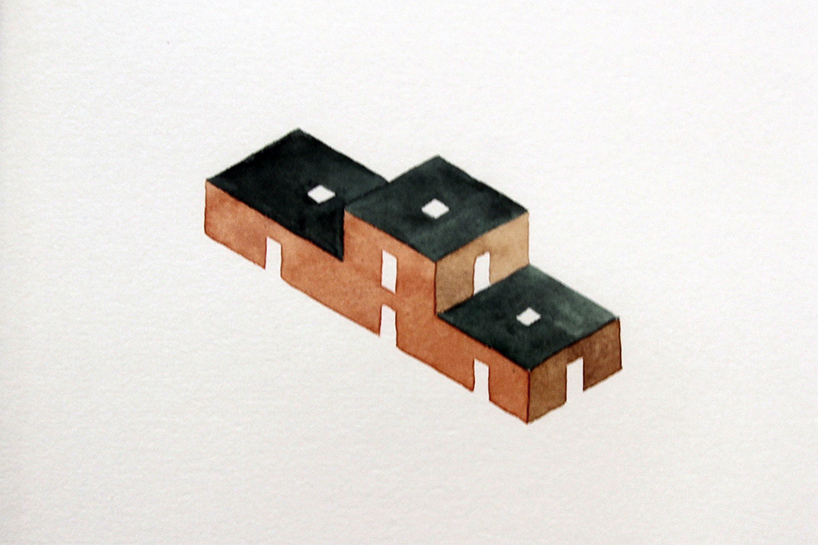 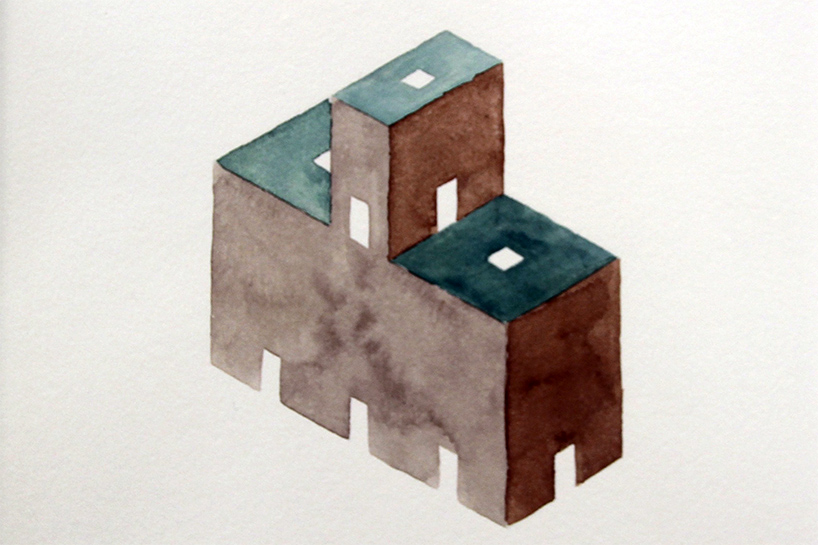 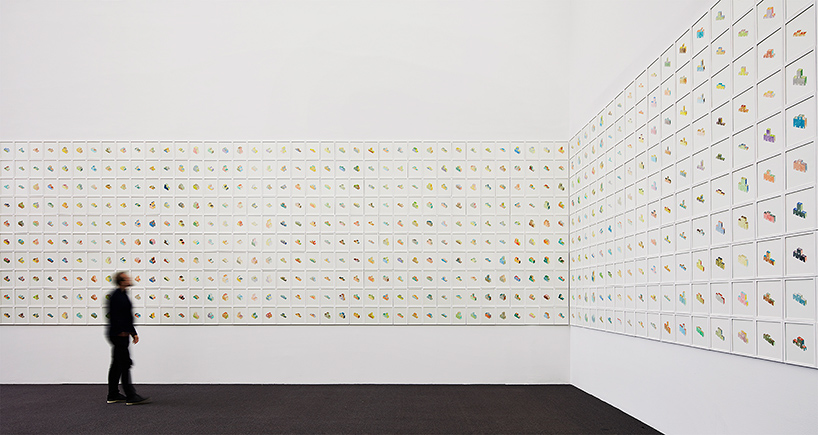 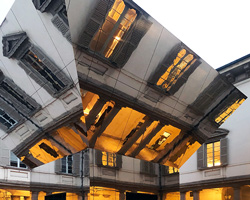 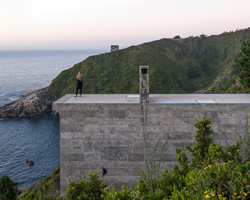 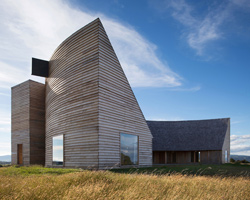