receiving the silver lion prize at the 2014 venice architecture biennale, the chilean pavilion displays artifacts which reflect upon a politically and culturally significant era of the south american country’s history. a concrete wall panel stands at the center of the exhibition – one of the first pieces produced by KPD, a factory which produced prefabricated housing elements, that was donated to chile by the soviet union in 1972. the panel presented has endured a controversial lifetime relating to a nation’s political changes. it once carried the signature of former chilean president salvador allende, who imprinted his name into the wet concrete, and was later used as a catholic icon with the image of a madonna and child.

while no longer physically containing these marks, the weathered architectural element still serves as a monument, representing a country’s history. this piece of concrete represents a relatively marginal tradition in the historiographies of modern architecture despite the fact that more than 170 million large-concrete panel apartments were built worldwide during the second half of the twentieth century. a series of 28 models that present various housing configurations created by the construction company during its existence accompany it. titled ‘monolith controversies‘, the chilean pavilion is complemented by a book of the same name, and was curated by pedro alonso and hugo palmarola. it is based on a research project documenting the 153 housing blocks built in chile by the KPD plant, as well as the technical, typological and conceptual reconstruction of twenty-eight large-concrete panel systems developed and disseminated worldwide between 1931 and 1981. 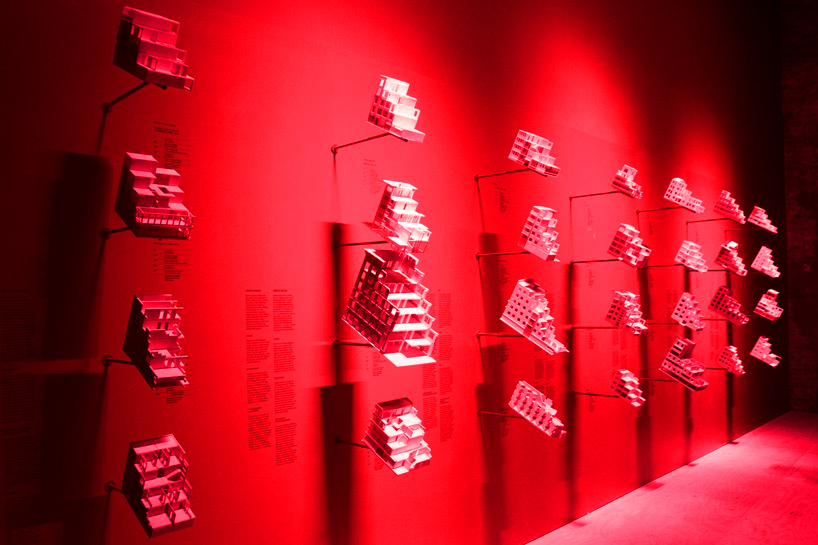 the chilean pavilion at the 14th international architecture exhibition is the result of collaboration between the curators and a team composed by luigi d’oro & arguzia s.r.l. (pavillion production and set up); gonzalo puga (pavillion designer); josé hernández and felipe aravena (production team); micol riva and francisco hernández (multimedia); martín bravo (visual identity); and with the participation of gianfranco foschino as guest artist. 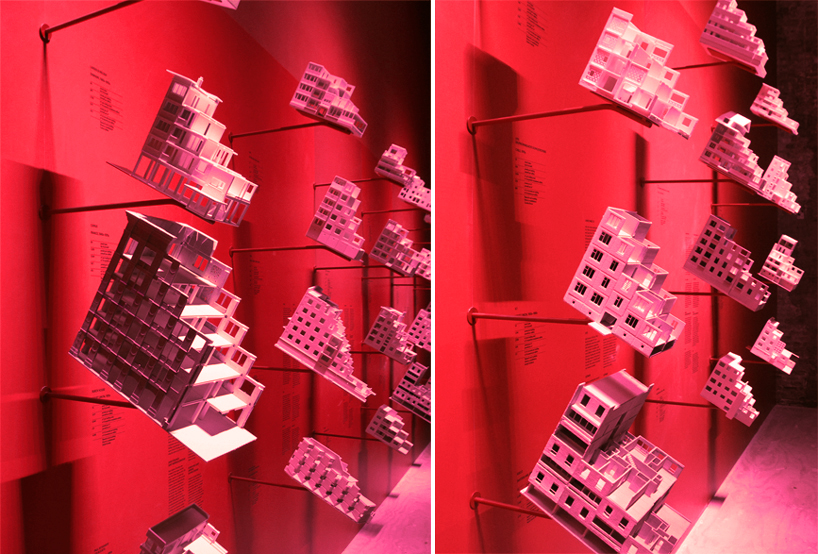 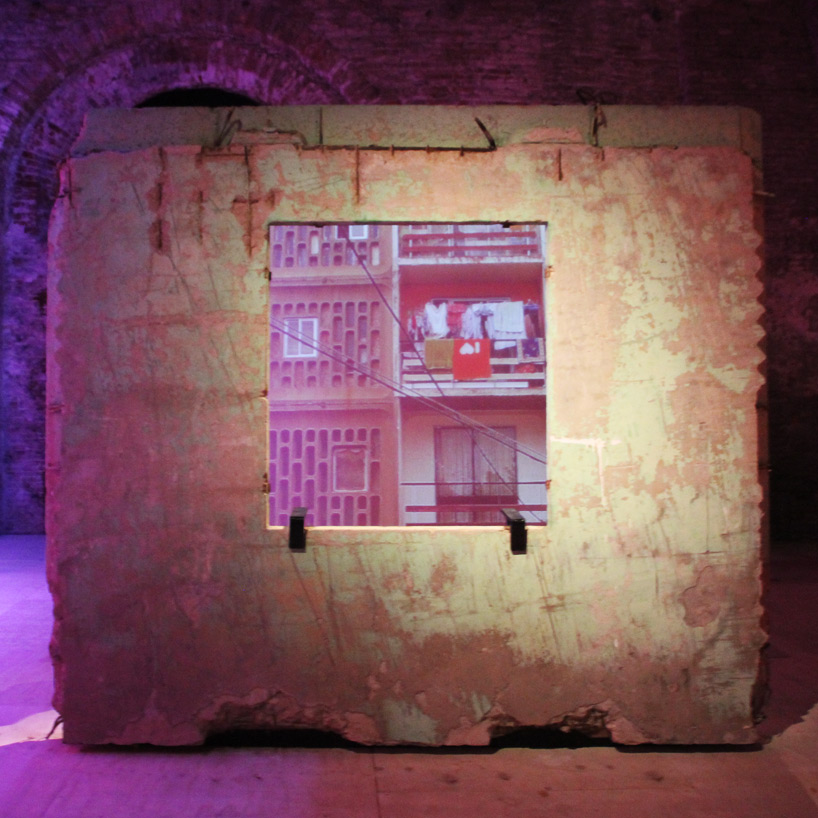 four fifteen-minute films without sound show the present state of chilean housing districts manufactured by the KPD factory between 1972 and 1978—urban and typological compounds in quilpué, viña del mar and santiago. foschino’s work does not align itself with the conventional repertoire, based on the exacerbation of the experiential, that characterizes contemporary documentary practices but instead reflects on the stillness and visual aspect of film to reassess the aesthetic dimension of contemplation. inside the pavilion, the window in the large concrete panel frames foschino’s silent loops. at the same time, the film itself gives the panel a context and background. 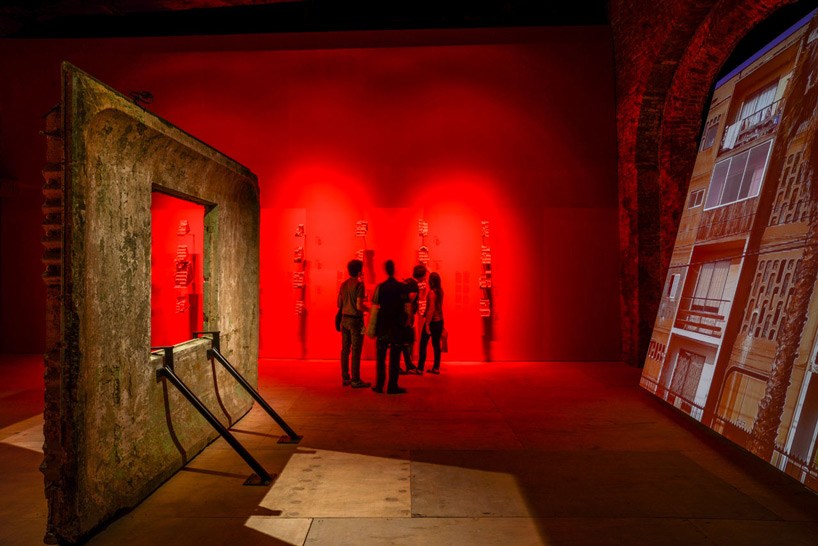 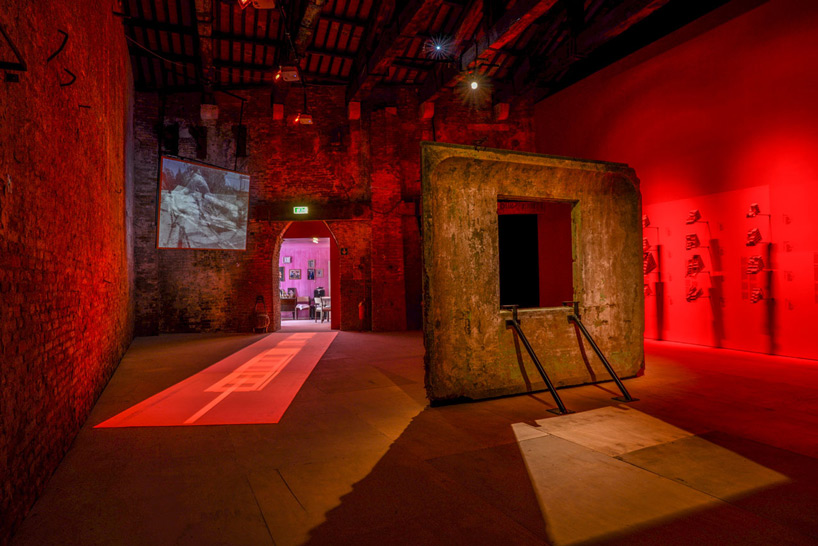 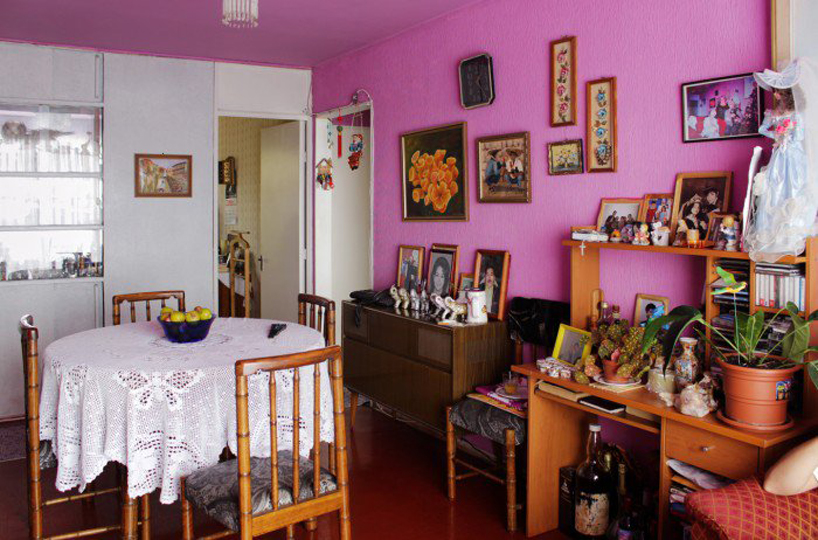 based on the apartment of silvia gutiérrez in viña del mar, a replica living and dining room from a KPD dwelling is constructed within the chilean pavilion. the environment allows visitors to experience an intimately scaled and personally decorated home, and contrasts the modernist industrial framework to which it belongs. 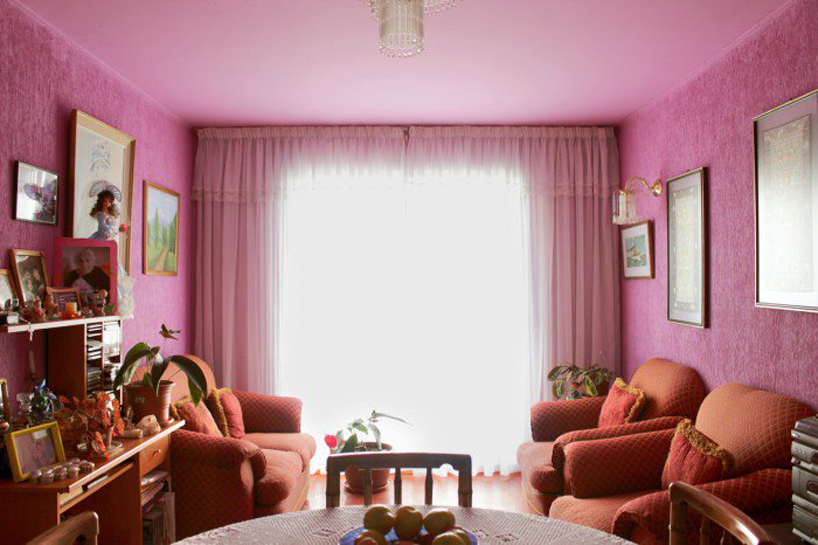 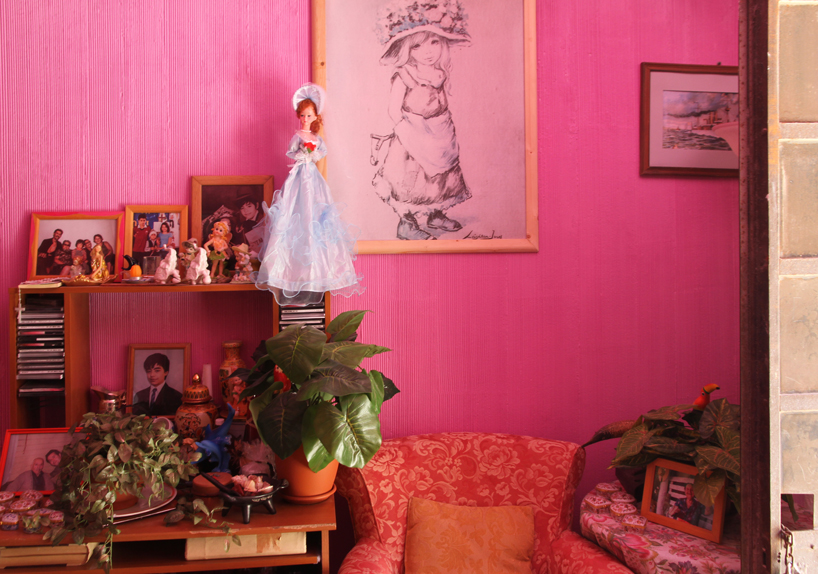 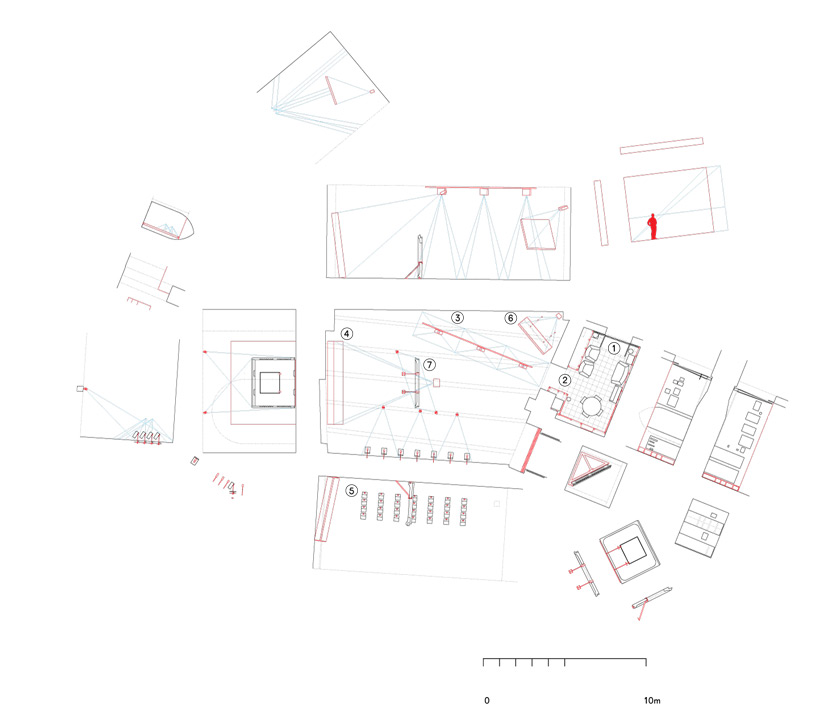 1– the user’s perspective comes from silvia gutiérrez’s apartment being reproduced with second hand furniture and objects from her living and dining rooms in viña del mar.
2– a portal and a text board provide the visitor with an introduction to the pavilion’s concept, the record of public and private agencies involved in this national exhibit and the team credits for the people working on this project.
3– the panel conveyor belt shows the scrolling inventory of pieces for the mass production of social housing made from concrete at the pace of the factory production line.
4– gianfranco foschino’s still life on canvas calls for collective memories through chilean fixed shots of housing districts built by kpd and vep in the cities of quilpué, viña del mar and santiago thereby providing the geographical context for the visitor.
5– the industrial insectarium has a collection of twenty-eight models of large concrete panel buildings, which displays the genealogical evolution of this globalized technology.
6– a visual assortment of records of social and political change are shown as a burst of machine-gun fire of images, as bits and pieces from this corner counter-relief, making the visitor visualize the impact of KPD and VEP on the chilean landscape and its people.
7– the standing KDP panel is lit to highlight the stucco, the painted surface, the remains of lamp fixtures and the rust. the traces of these things give an added significance to this temporary monument, which is a unique shot from a factory’s mould that was meant for a big production run. 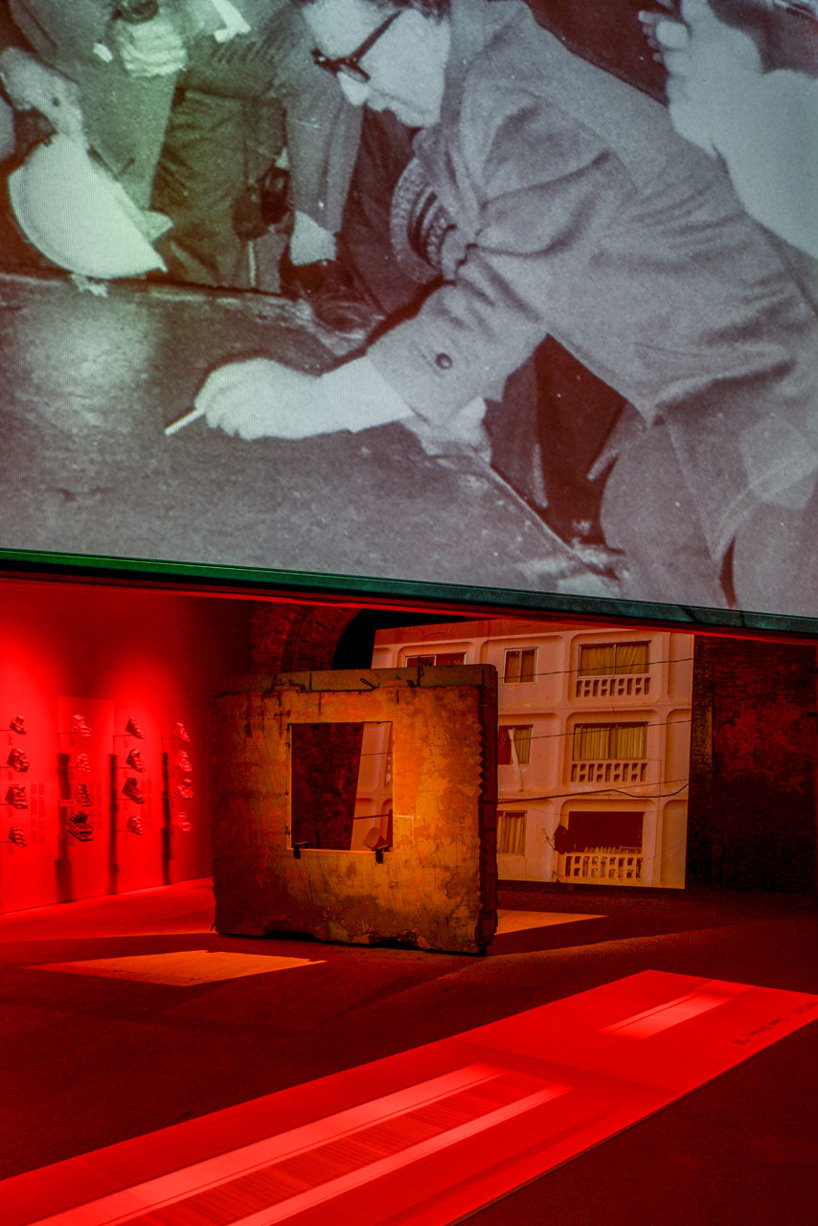 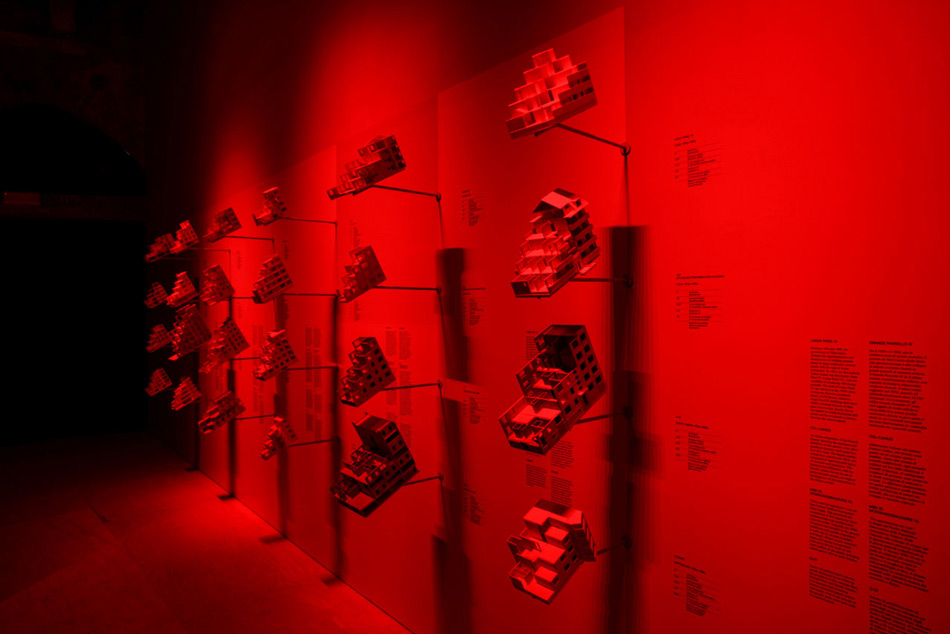 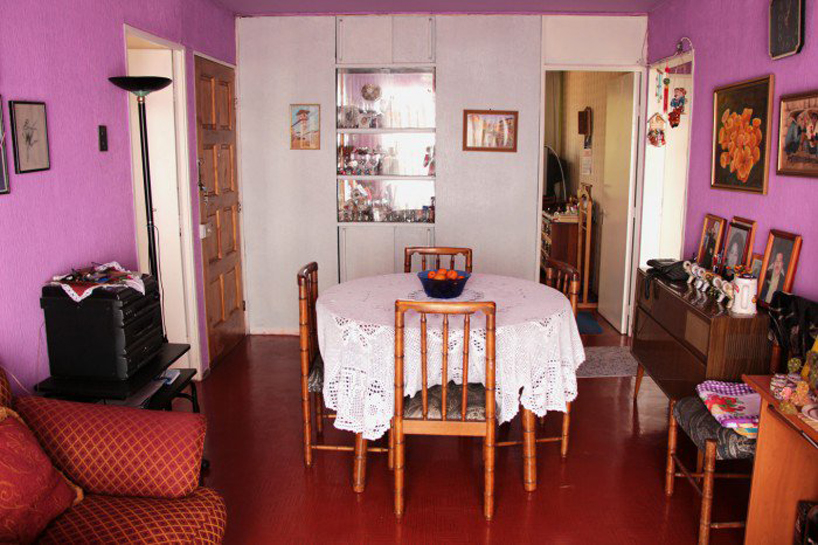 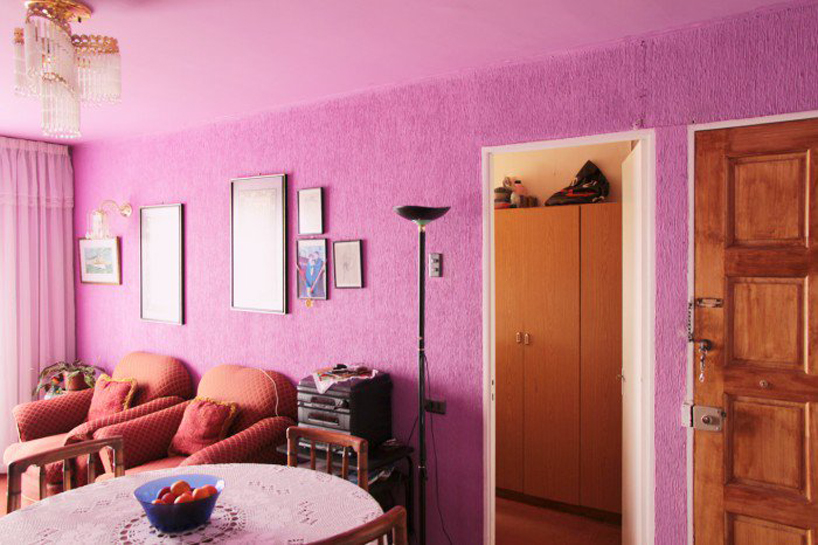 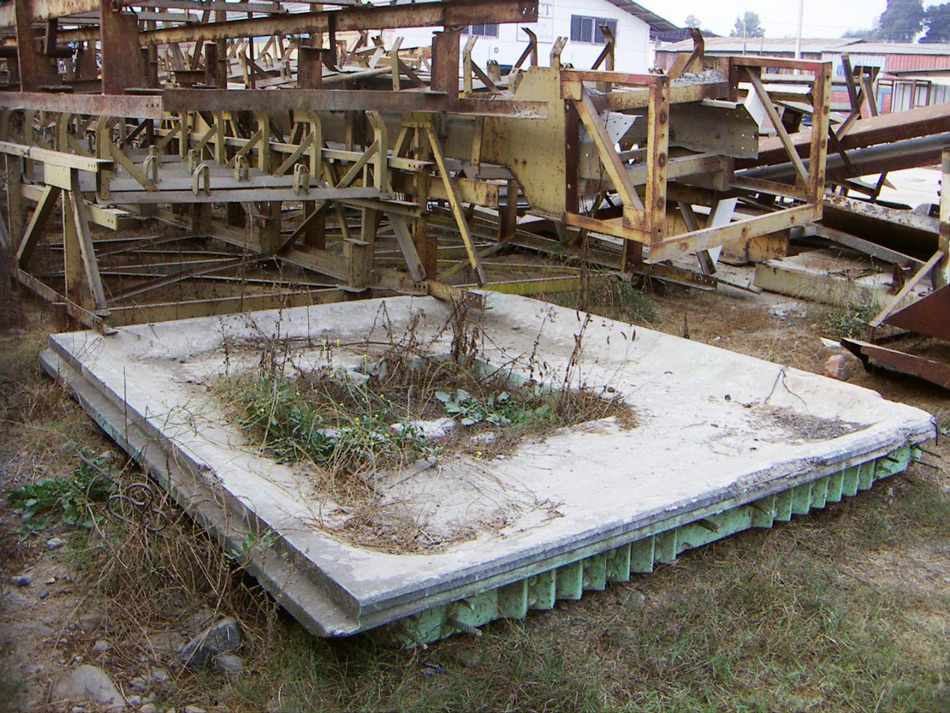 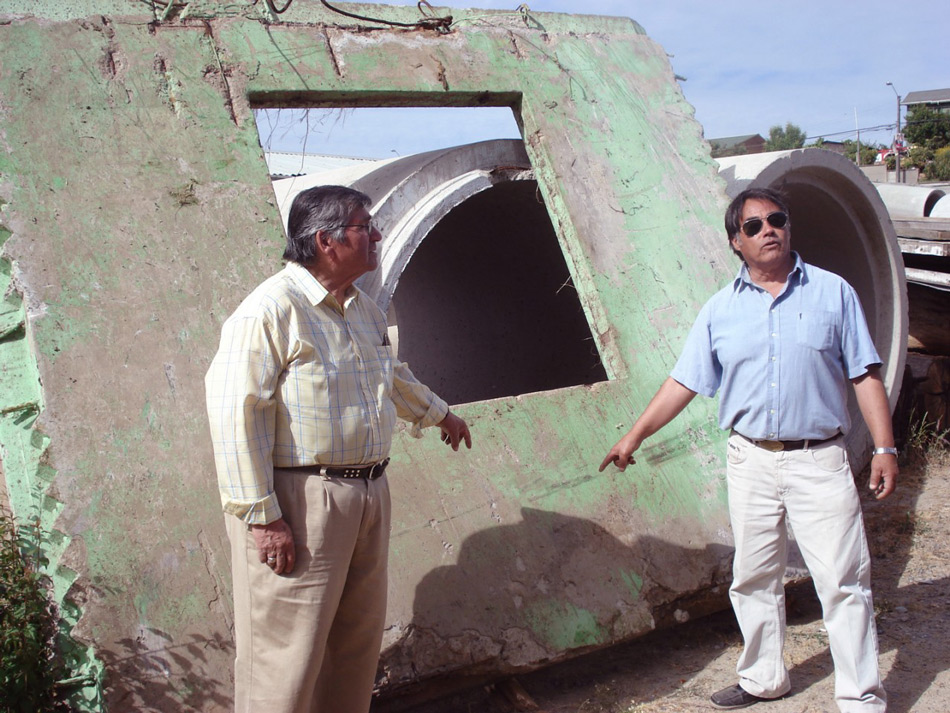 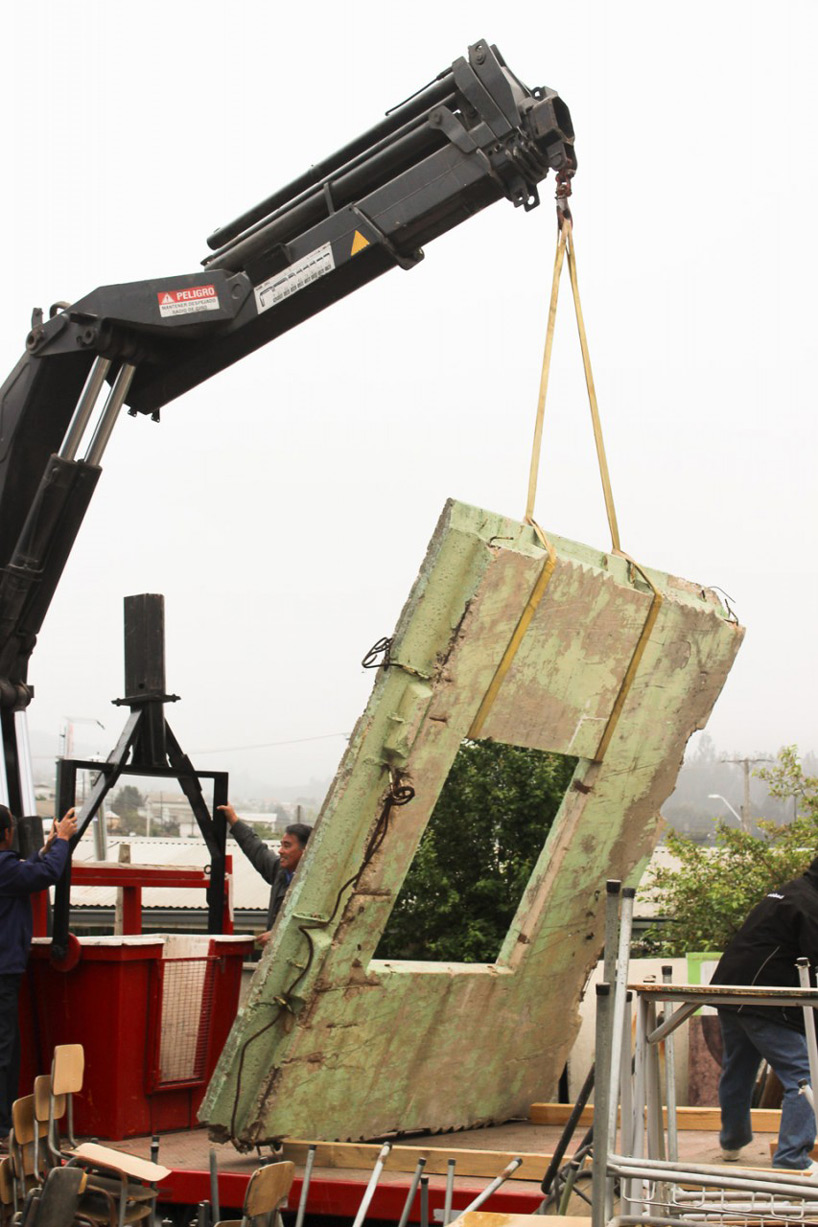 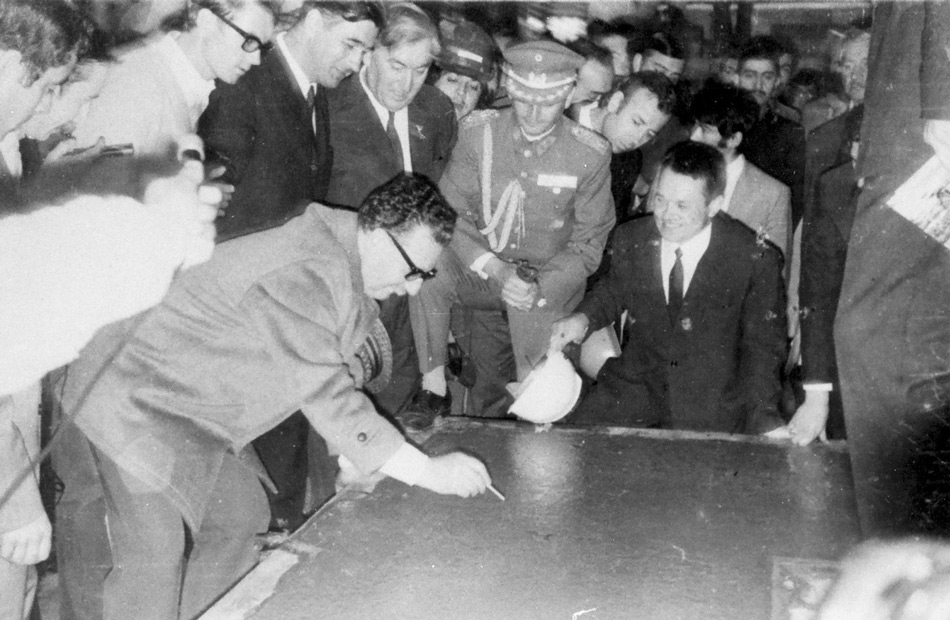 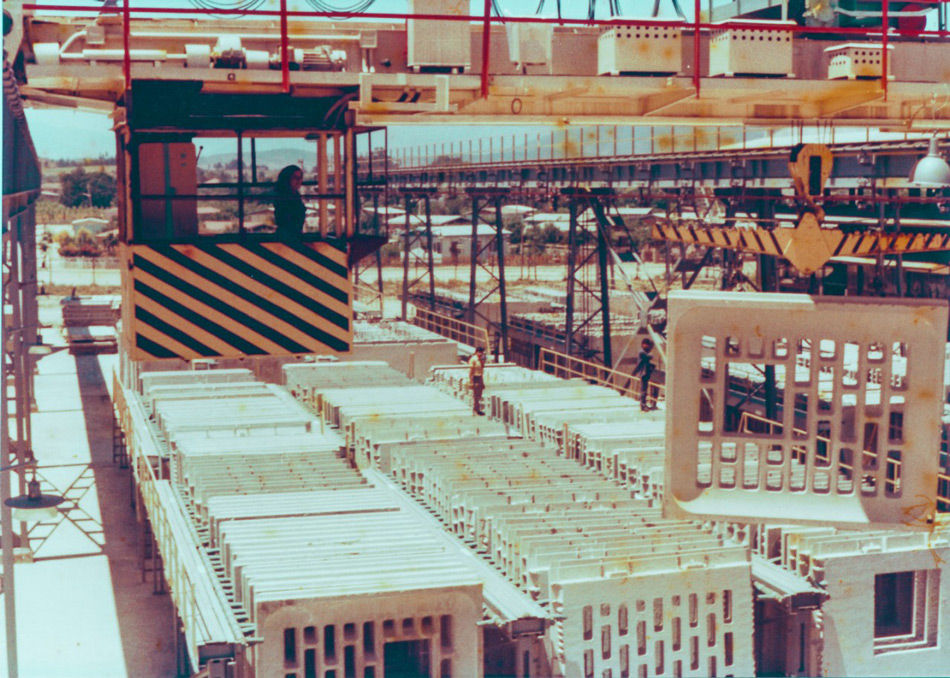 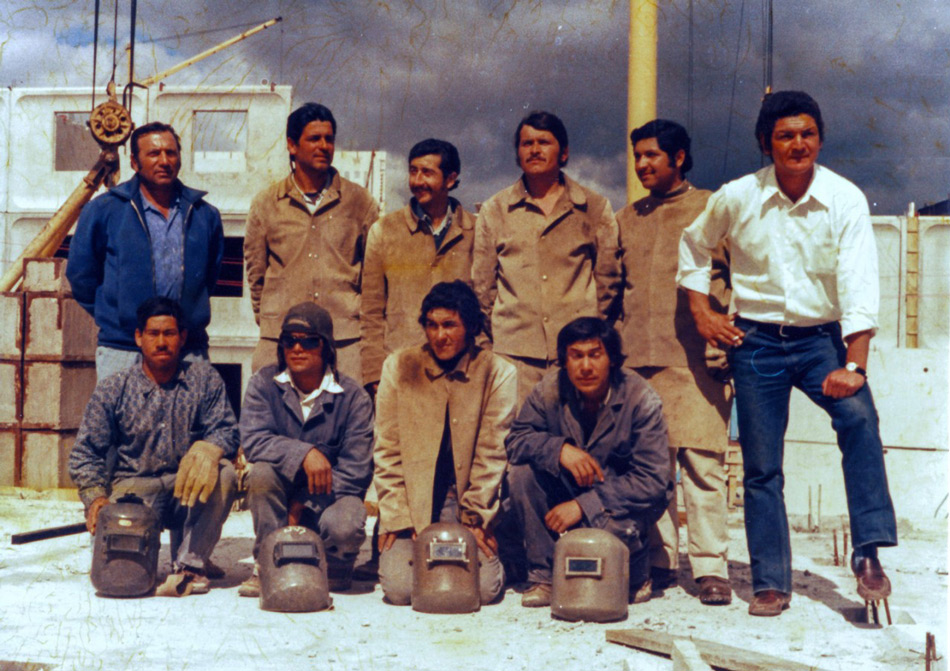 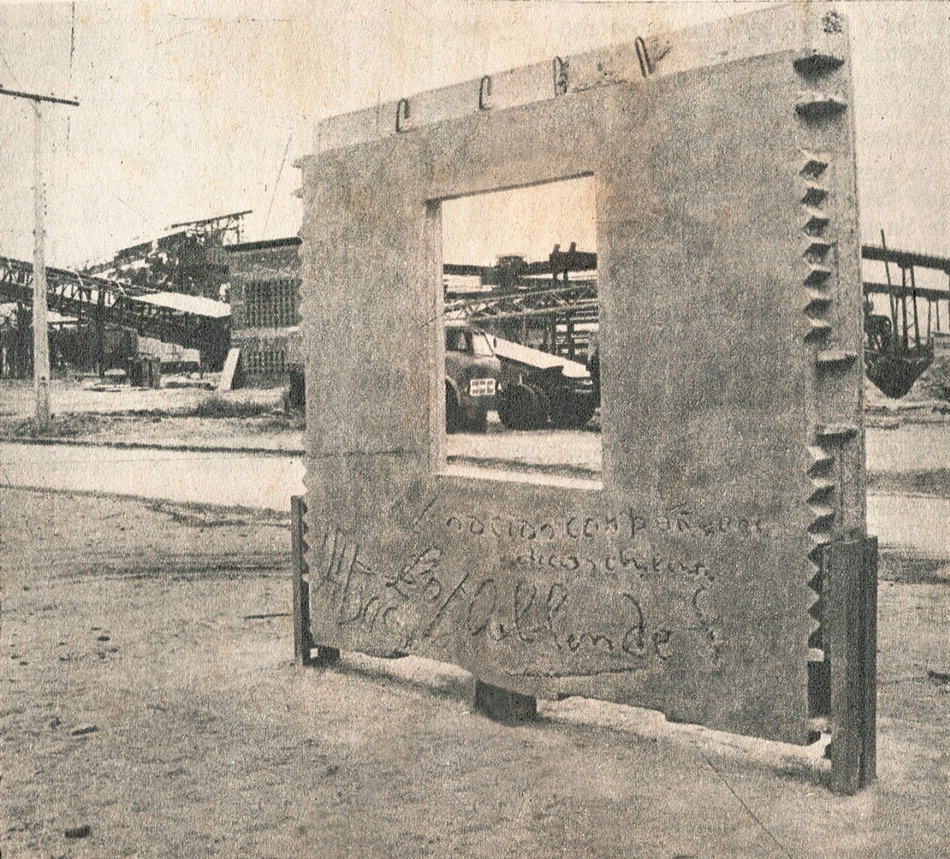 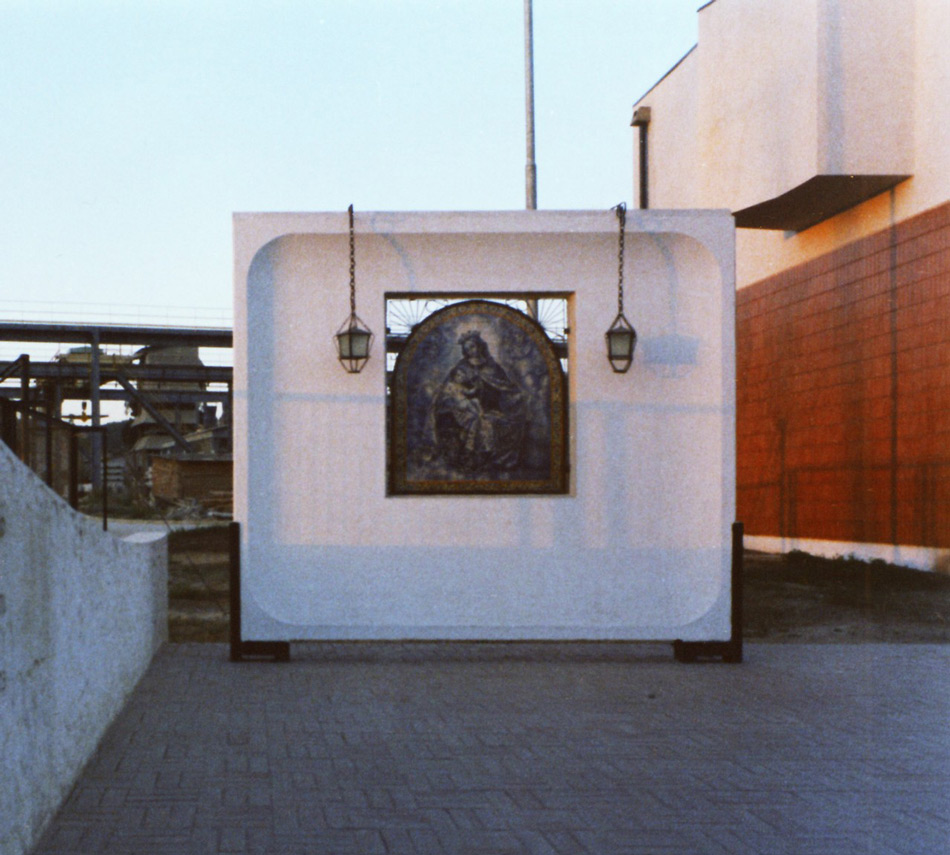