for a city of just over 47,000 people, columbus, indiana certainly packs an architectural punch. regularly described as an ‘architectural mecca,’ the american city welcomes thousands of visitors each year, who arrive to explore its streets and study its buildings. with a roster that includes eero saarinen, I.M. pei, robert venturi, and SOM, the city claims a collection of landmarks designed by some of the biggest names in architecture. 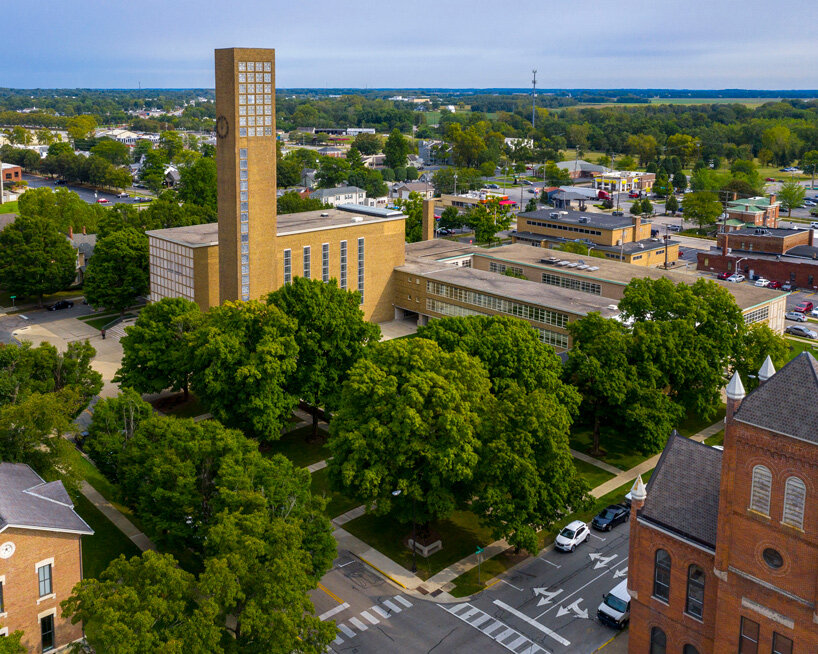 on august 21, 2021, the city will host the third exhibit columbus — an exploration of architecture, art, design, and community that activates the city’s design legacy. this year’s theme, ‘new middles: from main street to megalopolis, what is the future of the middle city?’ will include 16 site-specific installations at and in dialogue with iconic buildings, streetscapes, and landscapes around columbus.

ahead of the event, we take a closer look at the city’s architectural heritage and explore some of the landmarks not to miss. see ten projects below, from a covered bridge that dates back to 1840 to a fire station designed by a master of postmodernism. 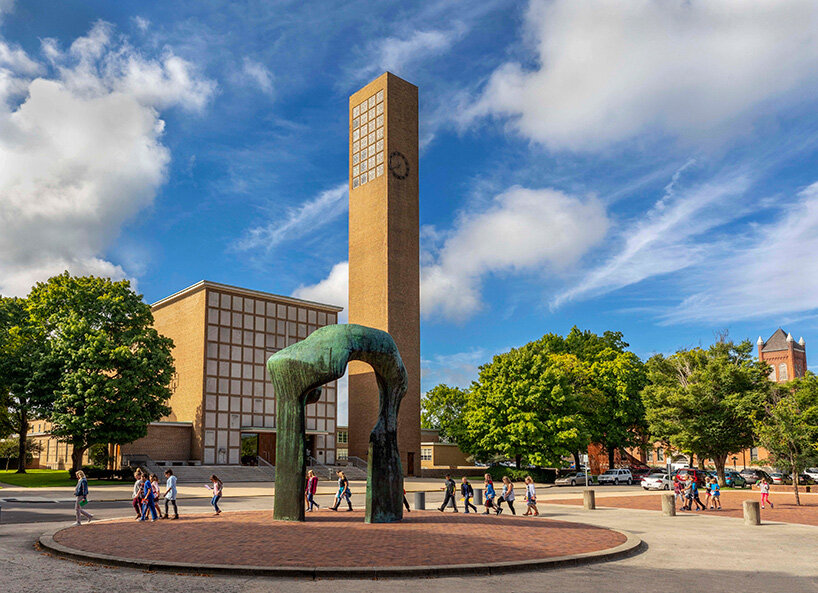 designed by architect eliel saarinen, father of eero saarinen, the first christian church was completed in 1942. the project is referred to as the first contemporary building in columbus and one of the first churches of contemporary architecture in the united states. the geometric design consists of a glass-fronted main hall, with a tower and bridge section. a large stone cross accents the limestone façade, facing 5th street, which is complemented by a 166 foot (50 meter) high, free-standing bell tower. 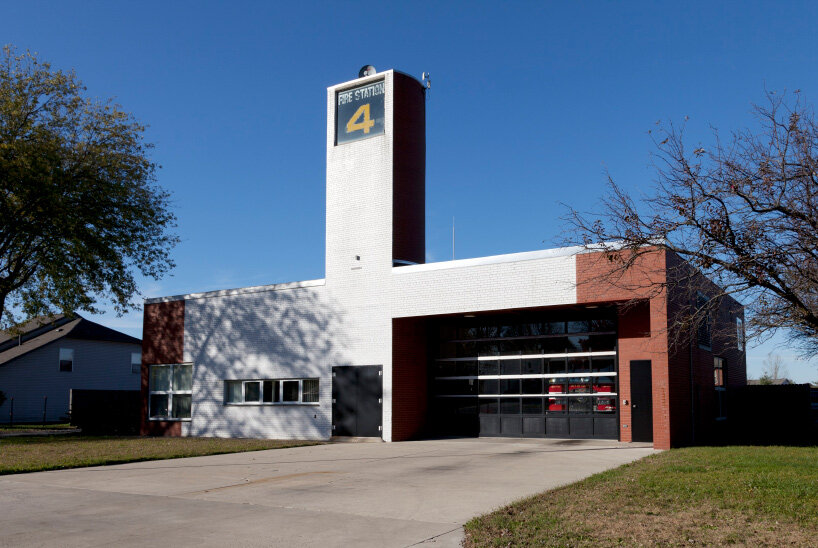 located at 4730 east 25th street, fire station 4 by robert venturi was designed in 1967. an early example of postmodern architecture, the building takes shape as a trapezoid of cinderblock, with white glazed and red unglazed brick and glass. the hose-drying tower stands as a focal point in contrast to the otherwise low, utilitarian building. 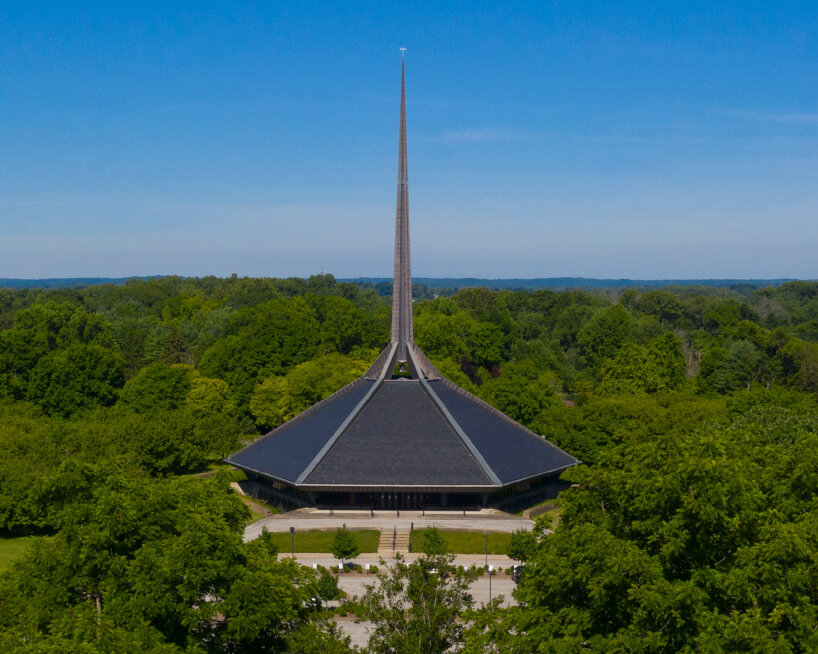 the north christian church was the last building designed by eero saarinen before his death in 1961. kevin roche john dinkeloo and associates, saarinen’s successor architectural firm, completed the building in 1964. the sloping roof of the six-sided building blends with the landscaped earth-mound which surrounds it. this low line accentuates the slender 192 foot (59 meter) spire, which is topped with a gold-leaf cross. 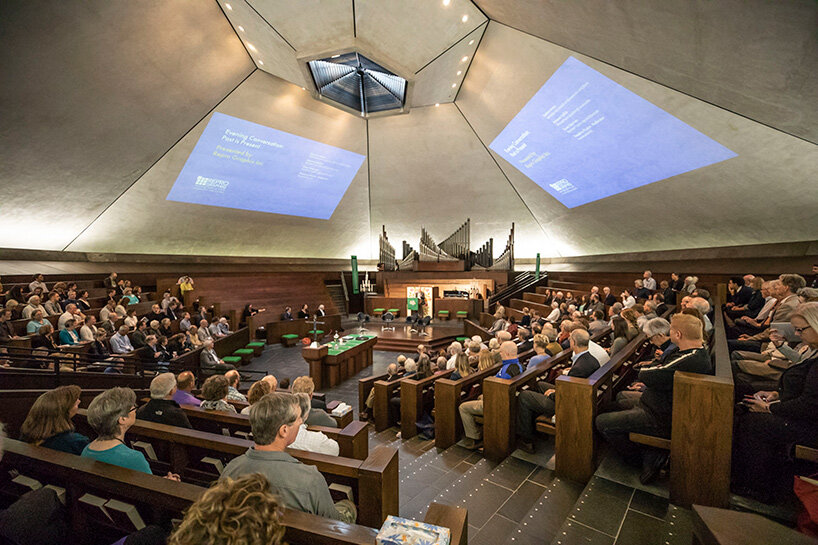 dan kiley, one of saarinen’s frequent collaborators, landscaped the multi-acre site, including the parking lot with parking rooms. ‘we have finally to solve this church so that it can become a great building,’ wrote saarinen in april 1961. ‘I feel I have this obligation to the congregation, and as an architect, I have that obligation to my profession and my ideals.’ 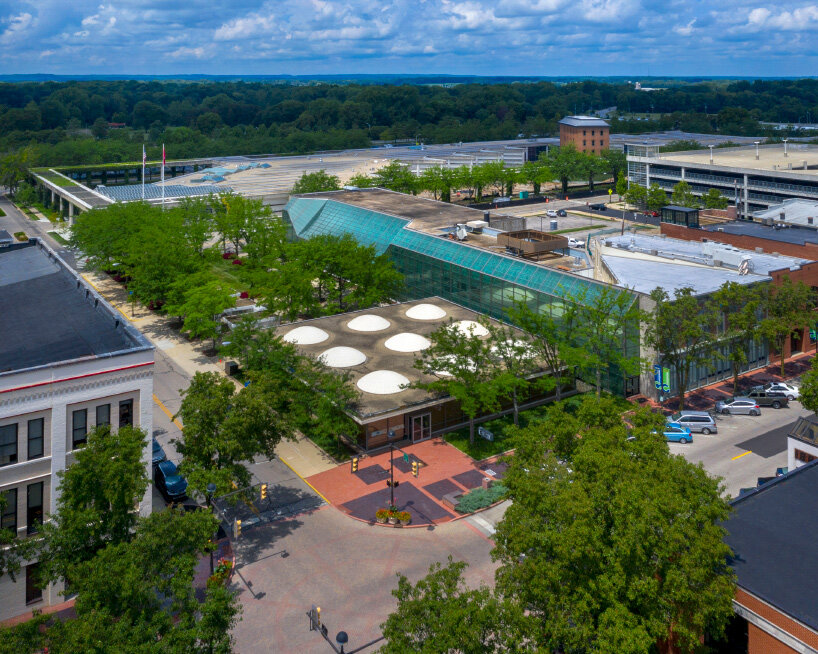 the irwin conference center, formerly irwin union bank and trust, was designed by eero saarinen in 1954. set in a grove of trees, designed by dan kiley, the building’s interior features domed lights and open spaces that seek to create a large room and an inviting feeling of friendliness. the structure was later joined by a three-story office annex, which was added by kevin roche john dinkeloo and associates in 1973. 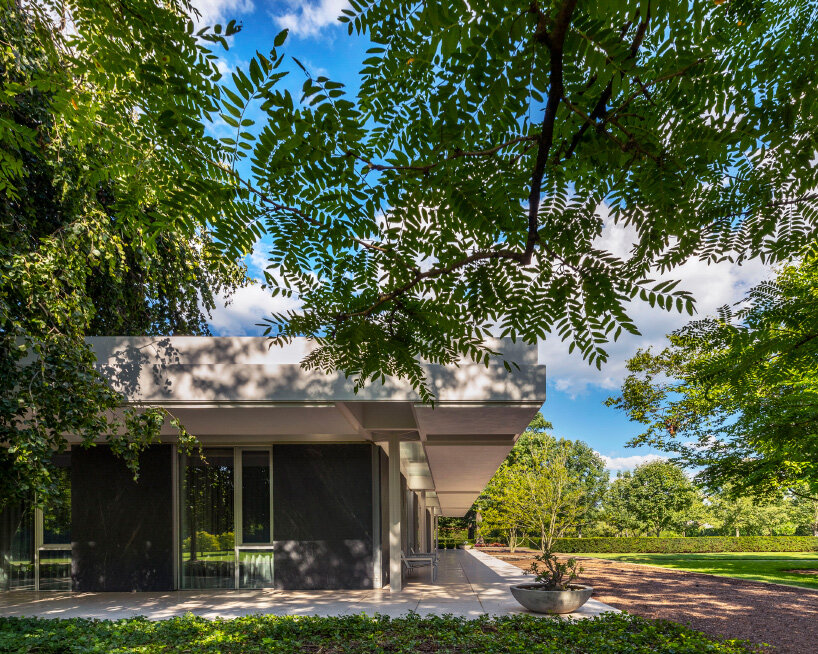 the miller house and garden is a mid-century modern home designed by eero saarinen, commissioned by american industrialist, philanthropist, and architecture patron j. irwin miller and his wife xenia simons miller in 1953. this hallmark of modern design — considered one of the most important mid-century modern residences in the country — was declared a national historic landmark in 2000.

designer alexander girard worked closely with the millers to furnish the residence, bringing warmth and color to the geometries of the house. girard designed a 50-foot storage wall made up of cabinets, bookshelves, and niches, and also introduced the idea of a ‘conversation pit’ built into the ground of the living area. landscape architect dan kiley was brought in by saarinen, with the landscape envisioned as an extension of the home and loosely divided into three distinct sections extending from sections of the house. 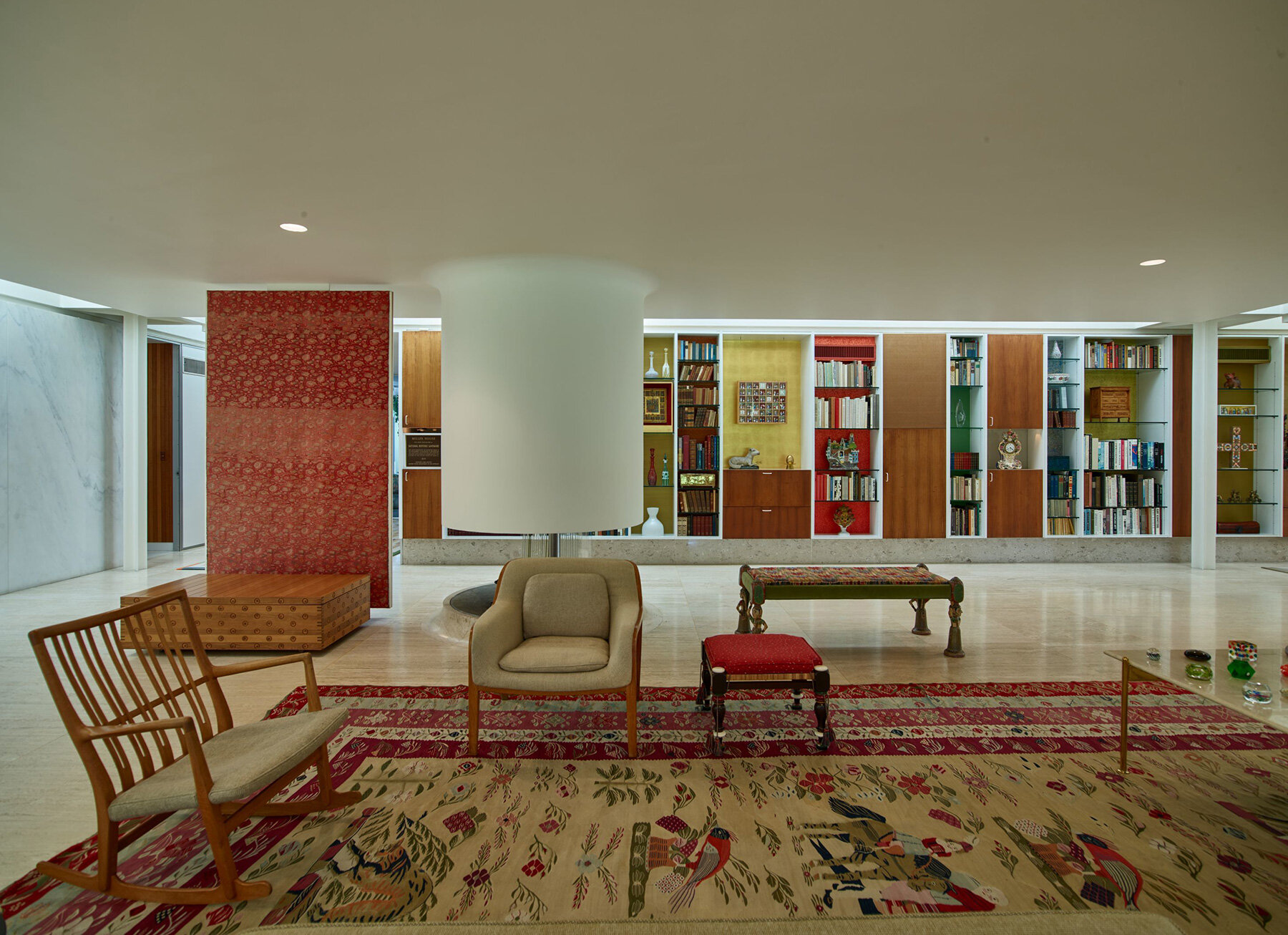 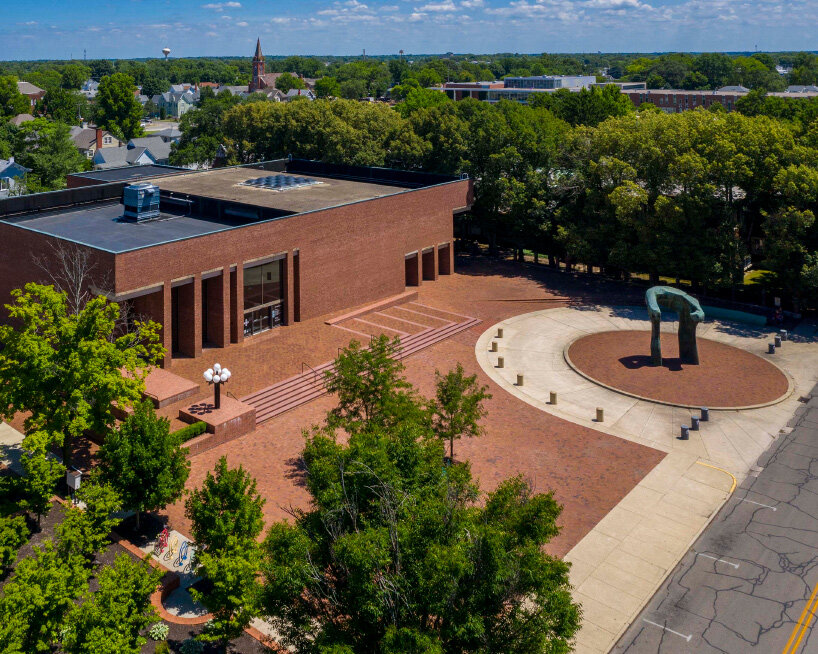 eero saarinen was first in line to design the city’s new library. however, after saarinen passed away in 1961, the library board turned to I.M. pei — a rising star of the architectural scene. externally, the red brick building is bordered by a public plaza that includes henry moore’s ‘large arch’ sculpture. 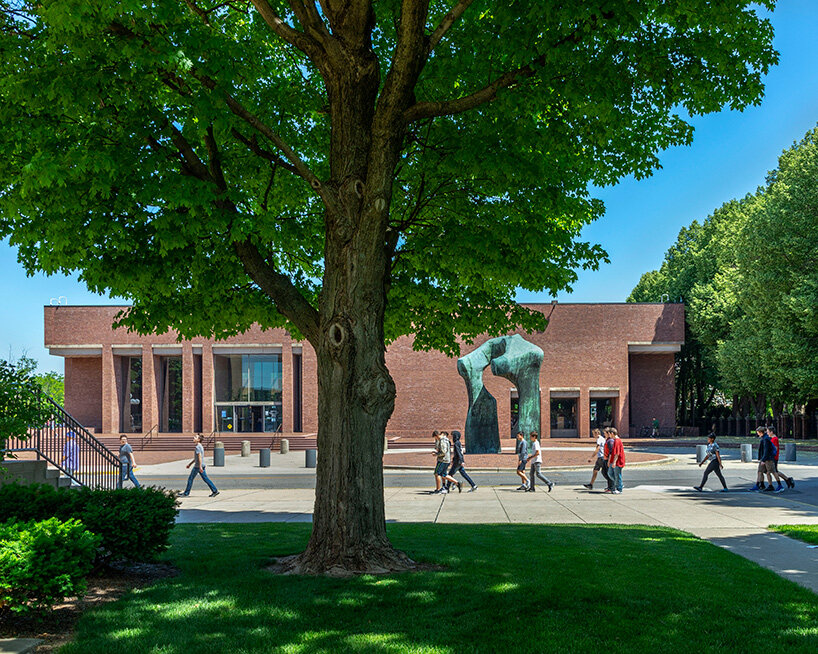 the design sought to establish a dialogue with the historic irwin house to the east and saarinen’s first christian church to the south. ‘the library serves as the north wall of this new urban space, reinforcing the unity of all three buildings with complementary native brick on its walls and outdoor plaza,’ explained the team behind the project. ‘at one end, the library’s windows drop in scale to align with the eaves of the low-rise irwin house while at the other, a heightened entrance and large-scale glazing complement and frame the more monumental church.’ 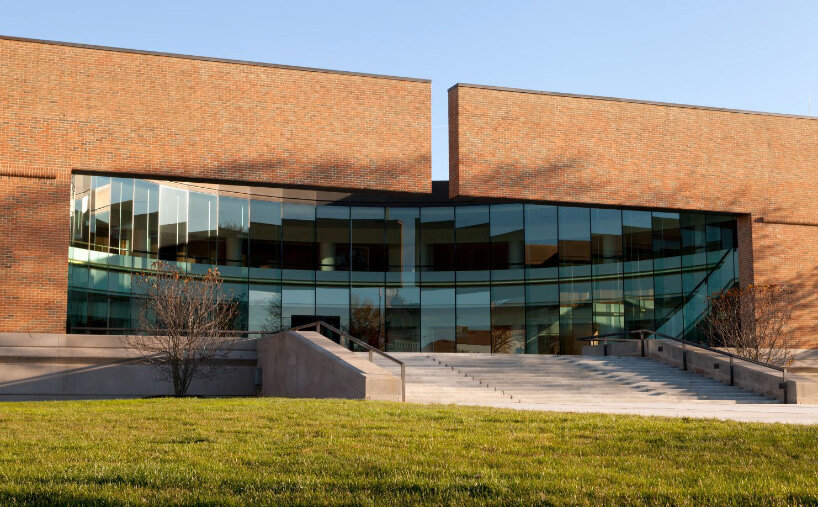 completed in 1981, the SOM-designed columbus city hall establishes a strong, modern identity for the city through its unique right triangle geometry, simple finishes, and contemporary art program. at the same time, elements of columbus city hall subtly pay respect to its surroundings, including the semi-circular, double-story curtain wall entrance, which reflects the historic bartholomew county courthouse located across the street. SOM has a long history of design work in columbus, having drawn up the masterplan for its downtown in 1972 and completed the newspaper plant and offices for the republic. 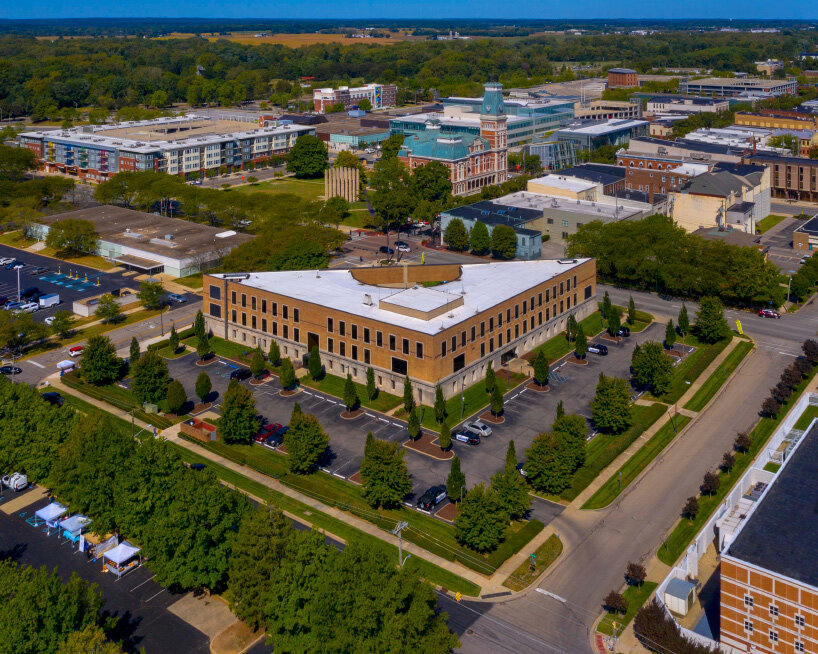 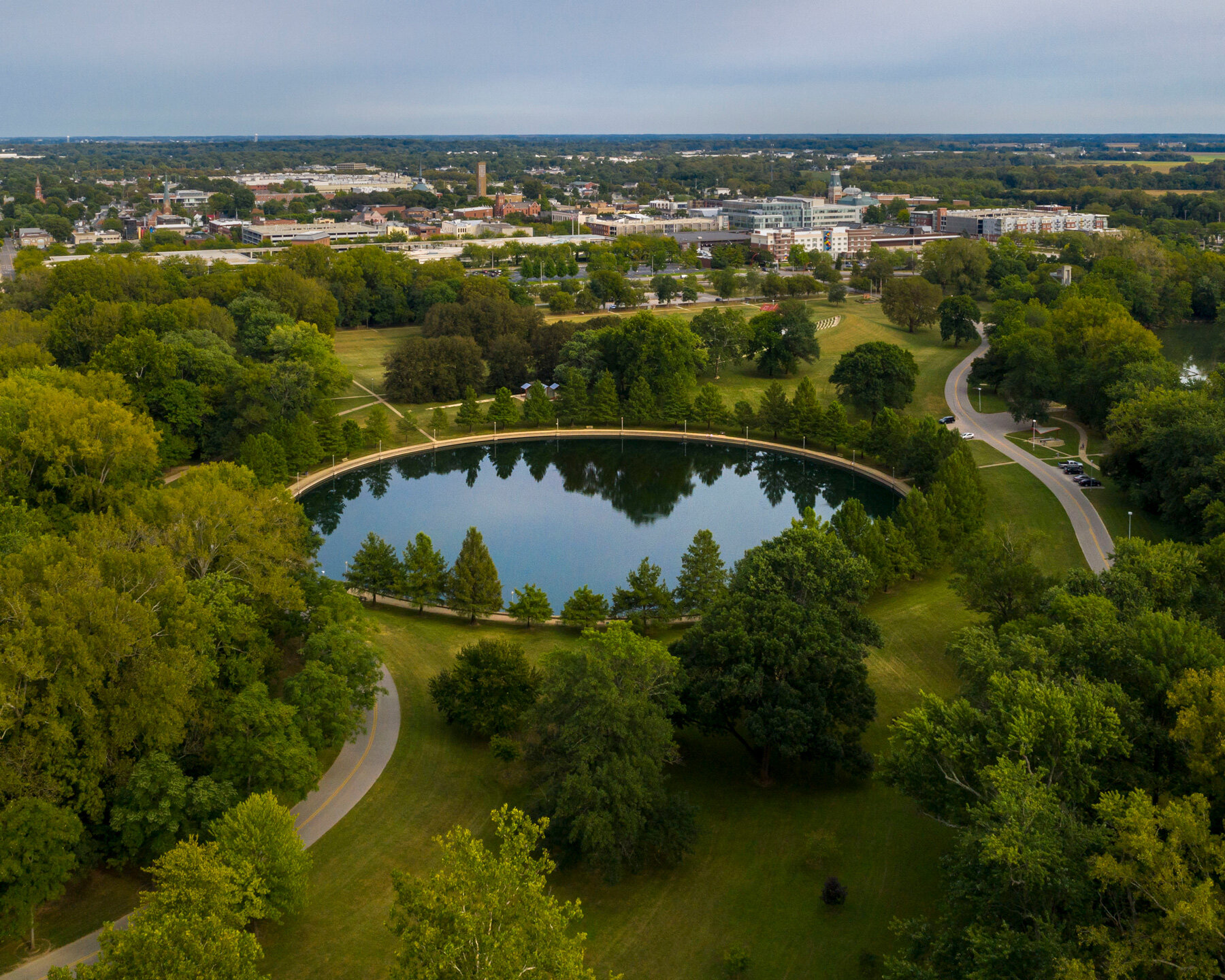 in the late 1980s, landscape architect michael van valkenburgh was commissioned to redesign mill race park. the focal point of the project is its round pond, which is experienced from a looping road that includes an historic covered bridge that was relocated to the site (see below). a series of ‘follies’, designed in collaboration with stanley saitowitz, are found throughout the park. these structures, highlighted with a signature red painted metal, include an 84 foot (26 meter) observation tower that provides views of downtown columbus, a boathouse, a river lookout, a fishing pier, the amphitheater stage, an arbor, restrooms, and picnic shelters. 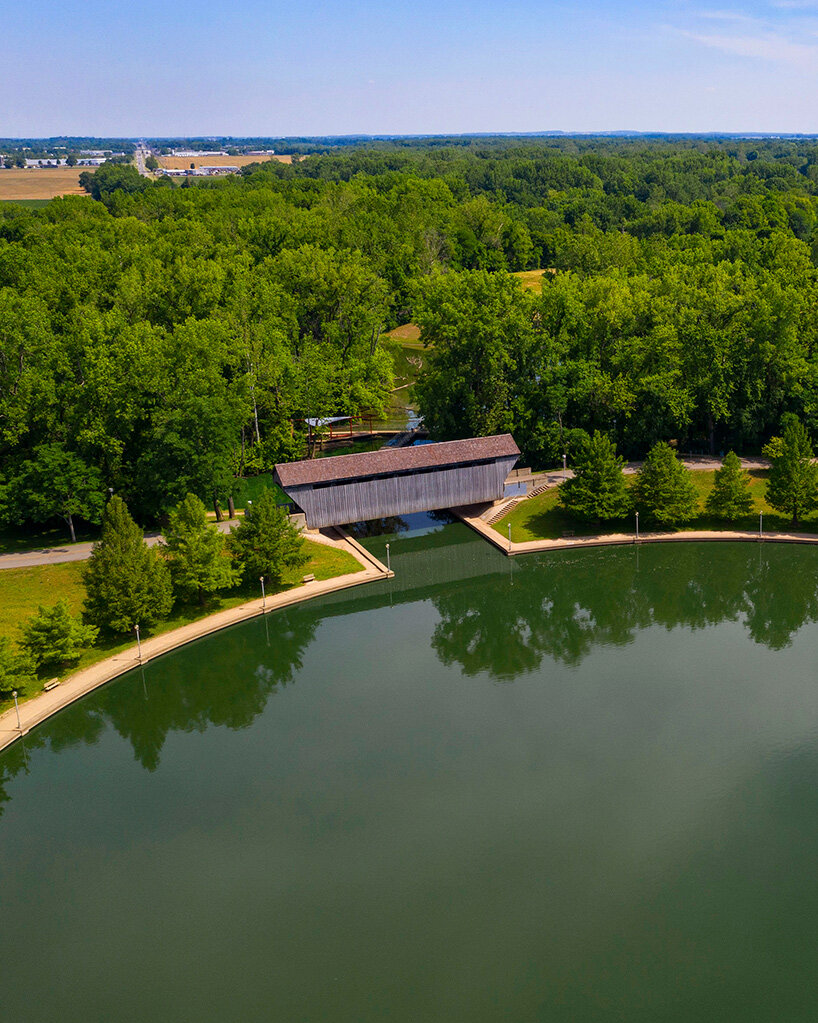 when it was originally completed by adam mason in 1840, the bridge traversed the east fork of the whitewater river near brownsville. today, the bridge has been relocated and reconstructed to take its place as a key part of mill race park. measuring 100 feet in length (30 meters), the crossing forms part of the ‘indiana covered bridge loop’. 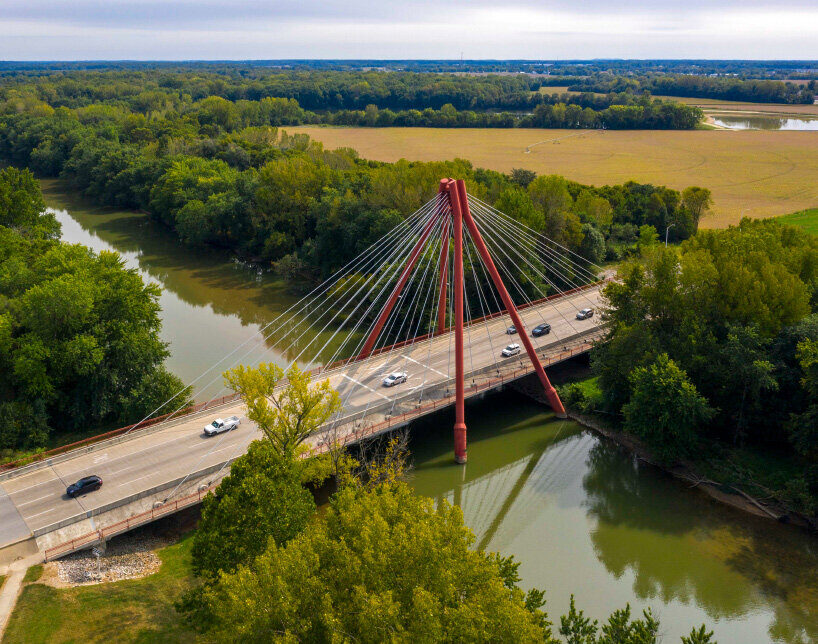 the robert stewart bridge, formerly the second street bridge, is located just around the corner from the brownsville bridge. completed in 1999 as the first cable-stayed bridge of its kind in north america, the structure serves as the entryway into downtown columbus. designed by jean muller, the bridge’s bright red steel supports connect steel tension cables arranged in an arc that is lit in the evening hours. learn more about the history of columbus’ architectural landmarks in the below video courtesy of journey indiana.