the ‘contemplating the void: interventions in the guggenheim museum’ exhibition invites 250 artists, architects and designers to imagine their dream visions within frank lloyd wright’s guggenheim museum rotunda. in their ideal use of the central space within the institution, some have transformed the rotunda into a lush forest of flora and fauna – an escape, within an escape…

for the danish architecture firm N55, the guggenheim is a prime example of architecture, created to support the strategies of the concentrations of power. so, they have proposed that visitors get an ‘antipower kit’ that would allow them to demolish parts of the building. the kit could contain tools like explosives or soil and plant seeds. while the building disappears in this way, the doors are left open for people, animals and plants to move in and inhabit it. 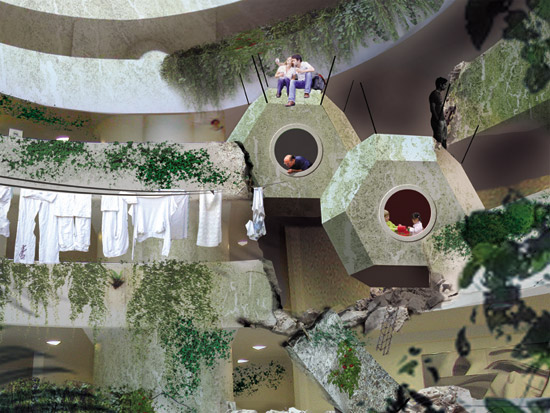 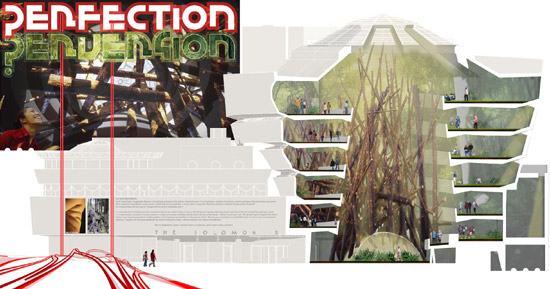 the guggenheim museum is a prototype of the sublime. iconic in its resolution of material, geometry and space, when it was completed, it immediately became sterile – victimized by its own perfection.

it is inevitable that the building should be confronted with the raw, chaotic vitality of nature. will the guggenheim keep her beauty, enhancing visitors’ experiences? dutch architecture firm west 8 wanted to test this by importing a forest, a 1:1 scale mock-up. it would consist of two key elements: a mossy fern meadow which stretches from the base to the top of the rotunda – a linear interior park, and 100 upended logs the height of the atrium. visitors can respond to the light qualities, smells and textures of the space or they can be critical asking such questions as: ‘were the logs sustainably harvested?’, ‘will plants do well in such an environment?’. will the guggenheim remain a sleeping beauty in a glass box, where nature cannot touch her? 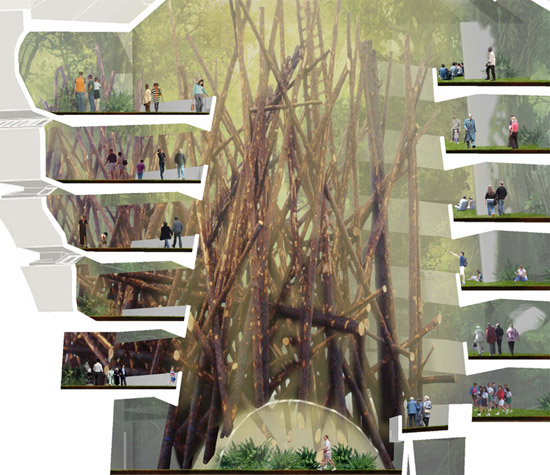 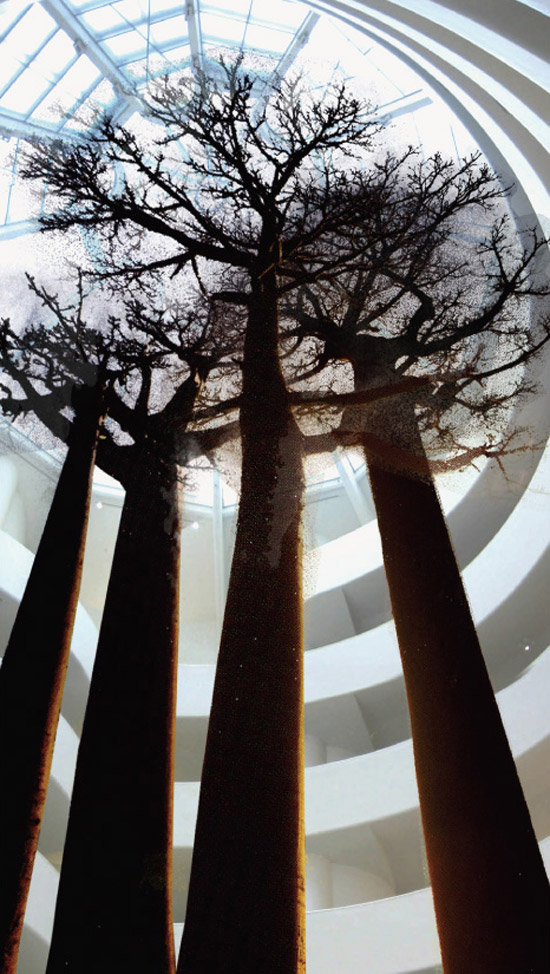 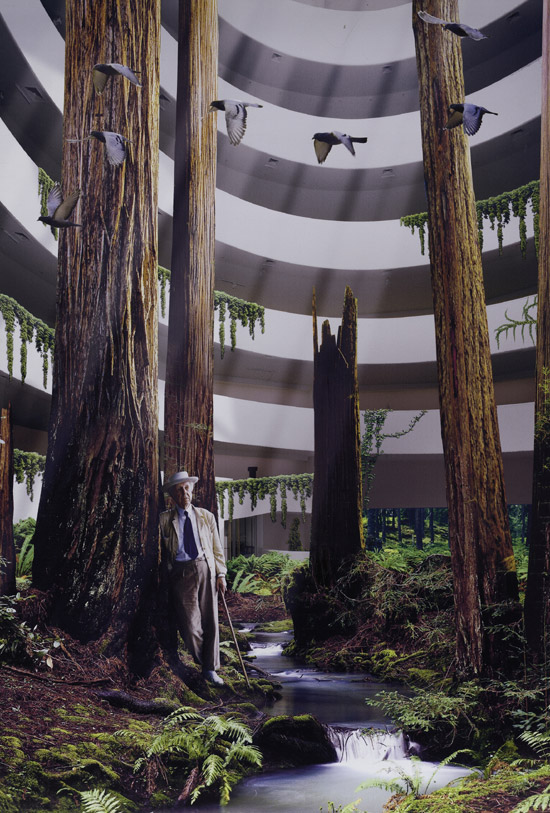 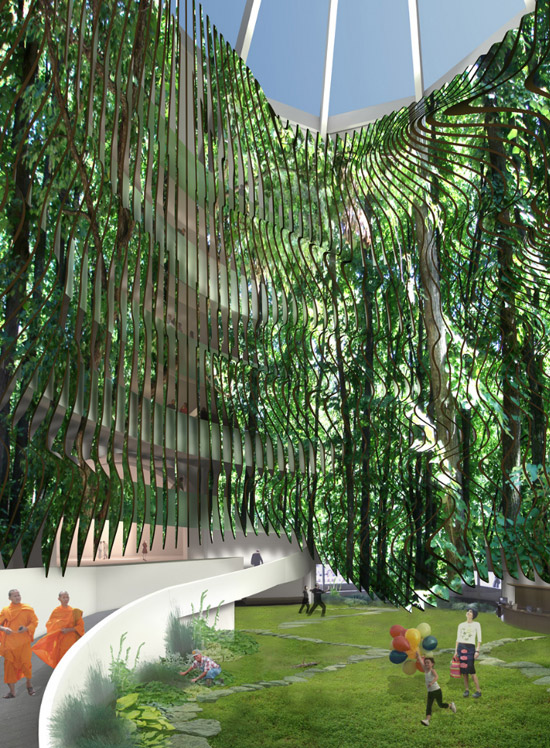 new york-based hariri & hariri architecture‘s ‘outside-inside’ proposal, is a tribute to frank lloyd wright’s desire to build the guggenheim in a natural setting. in a letter dated july 14th, 1943, to mr. guggenheim, wright expressed his ideal site as a park in riverdale, new york. he envisioned an organic architecture in harmony with nature, resisting conformity with the rigid grid of new york. hariri & hariri architecture has addressed the void by literally turning it inside out. they have imagined the rotunda as an outdoor space covered with trees, vines, plants and grass. if the museum could not be placed in nature, then nature could be placed in the museum. one-inch-thick recycled fiberboard ribs are envisioned as attached to the face of the ramp at one-foot intervals. each rib is cut in an organic profile with images of greenery printed on both faces. the ribs work together as a system, creating an ephemeral image of being in a park. because these ribs are two-sided, depending on where the visitor is – whether in the void, going up the ramp, or coming down – the scenery changes and nature plays its magic. 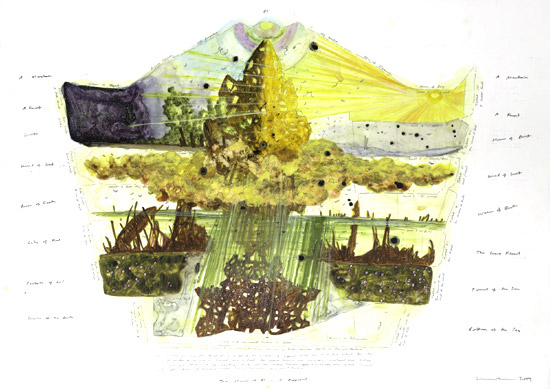 originally, the building was based on a model of the universe – a ziggurat; built as retreat from the rising floodwaters of mesopotamia. for london-based artist matthew ritchie, the ziggurat becomes an ark, cornucopia, cosmological map, ecology, universe and god – everything. climate zones are created through external air handling HVAC systems.

Dec 21, 2021
casey brown sets copper-clad cabin with movable awnings within lush australian paddocks
designed as a secluded off-grid destination, the cabin provides 'everything you need and nothing you don't'.
architecture
190 shares
connections: +840