the intention of developing the office high-rise town town erdberg was to generate a building which correlates to the principle ‘aesthetics of sustainability’. through an energy active facade and an integrated wind turbine the building is producing more energy than it is actually consuming.

‘according to that, town town erdberg is not a passive house but an active house,’ – wolf d. prix, design principal and CEO of coop himmelb(l)au.

marking the gateway to vienna towards the east, the town town office tower in erdberg is the main element of a developing urban zone.

its location directly on the subway line and in proximity to the highway to the airport connects the project ideally to the city; with regard to urban development guidelines this offers the opportunity for a distinctive architectonic form.

by combining two typologies (high rise slab and cylindrical tower) and with a cleverly positioned central circulation and access core as ‘hinge’, the building achieves a very high efficiency. the proportion of net usable floor area to gross floor area is 86% in contrast to 82% in a conventional building.

the shape of the high rise is also optimized for the implementation of an integrated and energy-active building system, which explains its excellent performance in terms of sustainability.

the crystalline forms of the metallic skin were developed in simulations of dynamic wind forces in order to be radar compatible and climatically, acoustically and functionally optimized. the skin envelopes both the slab and the tower, thus merging them into a single hybrid form. 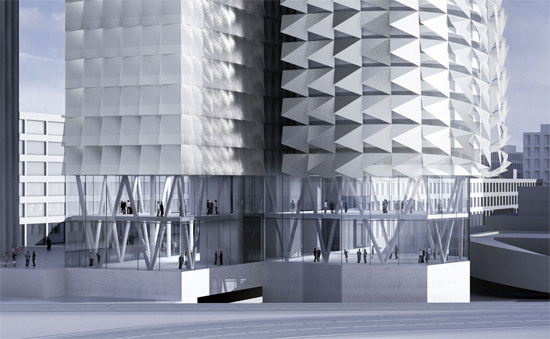 through the main entrance from the plaza the visitors step into a multi-level lobby as communication zone with a flight of stairs, which lead to the semi-public areas like the café, event spaces as well as special areas including the double height conference area.

further special areas like the canteen and the IT center can be reached via the two elevator groups, which also connect to the standard floors with offices: one group with four elevators accesses the first 16 floors of the high rise, the other group with three elevators is reserved for the floors 16 to 26.

supply and disposal for maintenance of the building is provided for on level N-2 via a private street, which is only used by the town town complex. in the two basement levels the server and other technical spaces, archives, and storage rooms are situated. 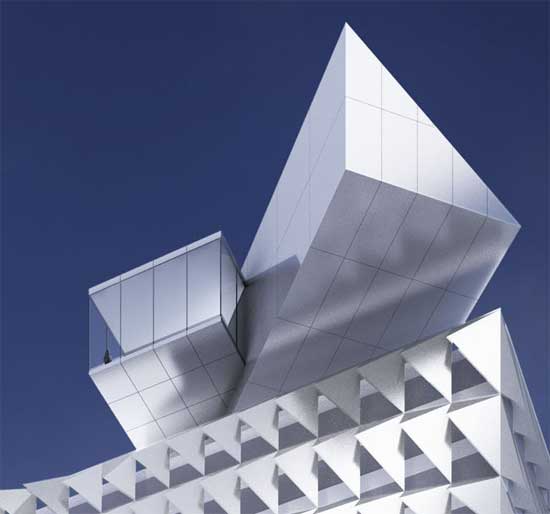 the notion of sustainability has become a new paradigm for technological progress, and as a consequence all efforts concentrate on reducing the consumption of non-renewable fossil fuels in the construction and maintenance of buildings. behind the concept of a high rise with an energy-active building system lies the ambition of an energy efficient, environmentally intelligent building design, with the aim of introducing both proven and innovative low energy consumption systems, environmental control systems, and newly developed energy harvesting systems, and at the same time to enhance the user comfort. this reduces the necessary investment in building technology and decreases the maintenance costs.

all office spaces of the thermo-active building can be naturally ventilated through operable windows as well as by optimization of the climatic skin; district heating is used for additional displacement ventilation. 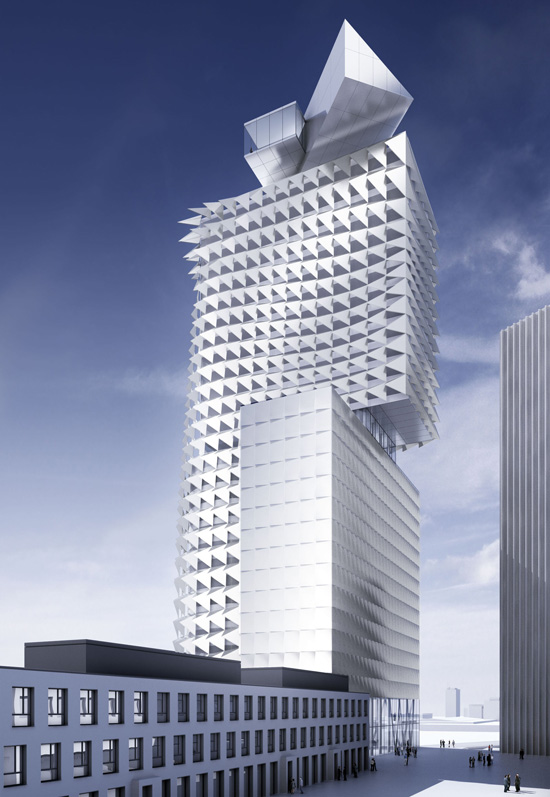 essentially, the tower façade consists of folded sheet metal elements. both the façades of the slab and the tower are composed of external façade elements, which are mounted at varying angles in front of the standard façade behind, which is fitted with fixed and operable elements. the outer skins of the lobby at street level as well as of the sky lobby and the sky lounge are glass façades with a post and beam structure.

since the building is located on the approach path of the vienna airport, another property of the façade proves beneficial: due to the three-dimensional folding of the exterior skin it is radar compatible, which means that it has maximum radar absorption and diffusion on all sides (‘stealth effect’). 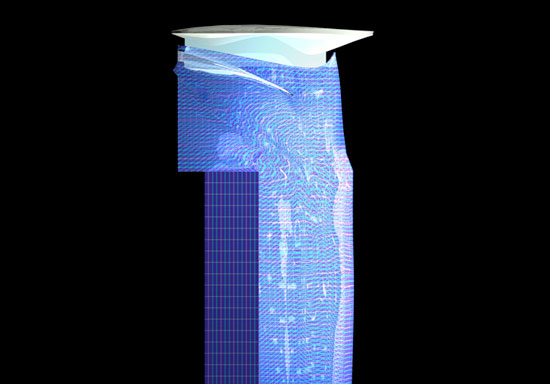 the building produces electric energy in two ways: on the one hand through wind energy by means of a large turbine on top of the tower in a bar-shaped construction, which is optimally oriented with respect to the locally dominant wind direction. on the other hand the façade panels are provided with a photovoltaic lamination, which produces electric energy through the sun. according to the tests and studies, the façade and the turbine together produce more energy than the building actually consumes.

in contrast to a standard office building of comparable size, which uses 2,000 to 4,000 MWha, but does not produce energy, this office building achieves excellent values: depending on the net consumption, the energy gain of 2,000 MWha improves the energy balance – the surplus energy can be sold back to the utility company. this means in other words also that the break-even point of efficiency will be reached much earlier. for the same reason the eco-balance regarding the building operation shows a saving of a total of 1.100.000 kg CO2. 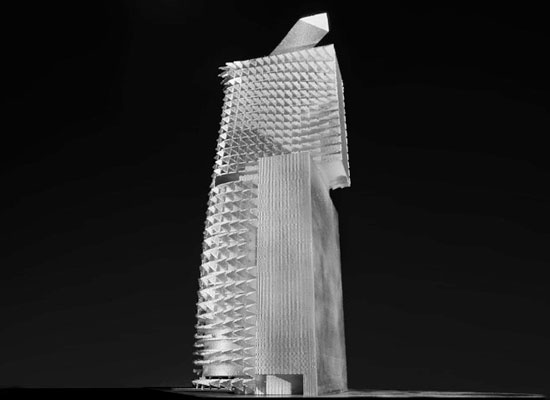 since 2002 the MIPIM architectural review future projects awards have been granted for un-built or incomplete projects. 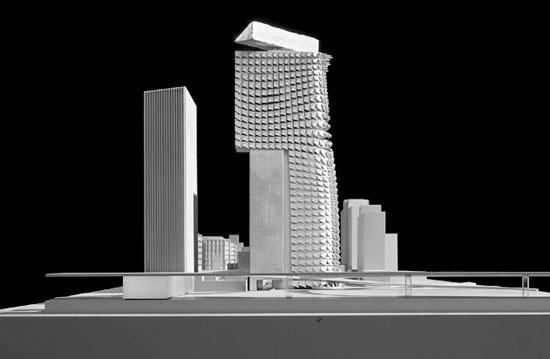 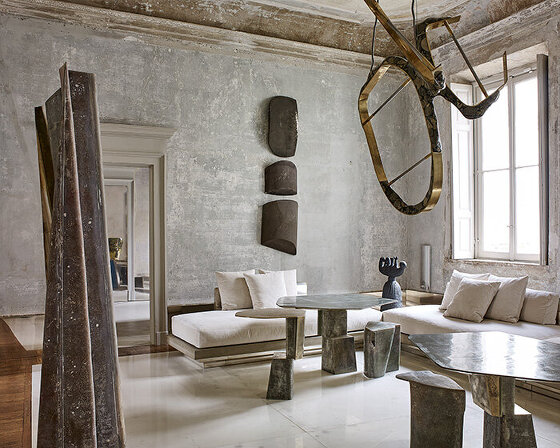 May 03, 2021
vincenzo de cotiis' apartment in milan uncovers the history of its 18th-century palazzo
known for his mastery in transforming industrial spaces into stylish ones, milan-based architect, artist and designer vincenzo de cotiis has opened the doors to his own apartment.
architecture
385 shares
connections: +360