beijing-based architecture firm crossboundaries has revealed images of its largest project to date: an enormous school campus currently under construction in china’s hainan province. with a total construction area of around 130,000 square meters (1,399,308 sqf), the site will accommodate up to 1,500 middle school students and 2,100 high school students. the campus will also provide: a dormitory complex; canteens and dining halls; libraries; teaching and learning facilities; laboratories and maker studios; leisure areas; and a large sports complex. meanwhile, an art center will feature a theater, concert hall, and rehearsal rooms for individuals and orchestras. 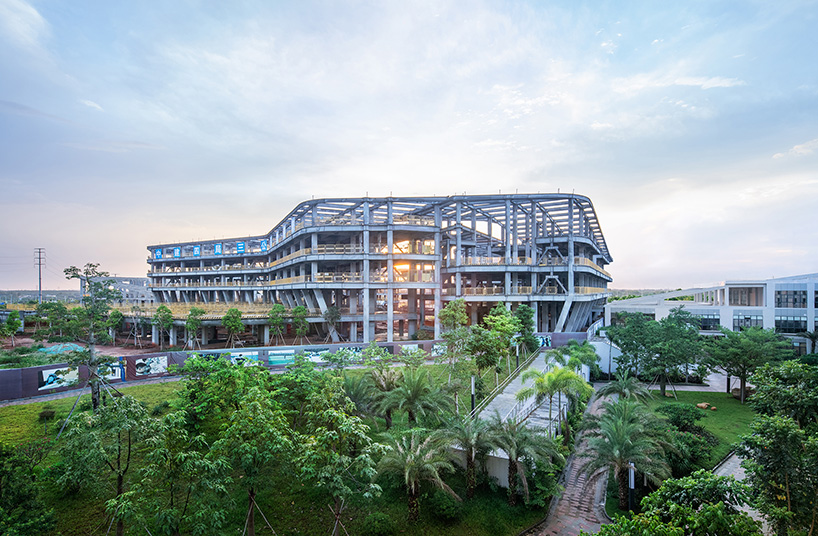 all images by bai yu

officially titled the ‘haikou school of the affiliated high school of peking university’, the project seeks to provide students with a human-scale environment despite its large size. crossboundaries began the project by addressing the significant height differences between the north and the south of the site. ‘the campus was terraced and further arranged according to feng shui principles, with the different functional building parts set in a sequence following the terrain, to achieve balance between the ying and yang forces,’ explain the architects. ‘at the same time the site was divided into a series of diverse ‘micro environments’.’ 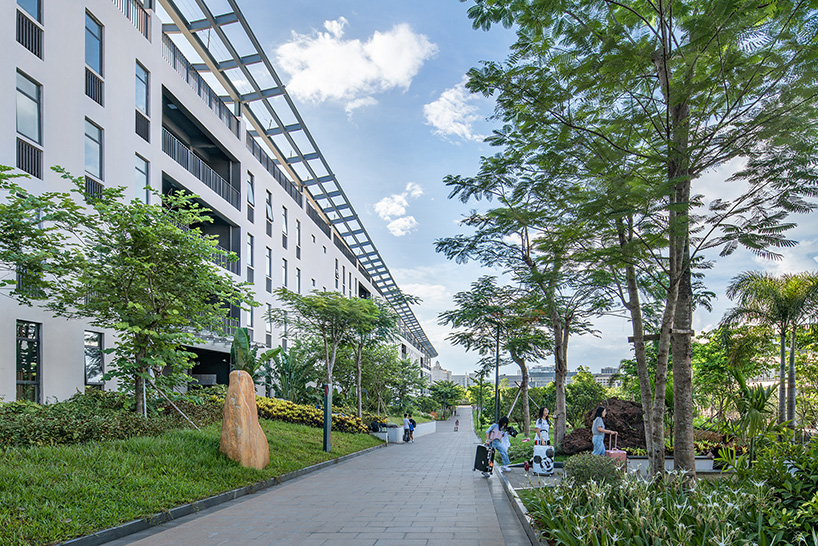 the cloud-shaped learning center, which comprises classrooms articulated around an open courtyard, is placed at the heart of the campus. flanking both sides of the structure are buildings with other functions, providing for more than 3,600 students. to the east is a large dormitory, while to the west are the school’s sporting facilities. the scheme’s S-shaped configuration responds to the site’s prevailing winds as well as sunlight/shadow orientation. the relatively slim building also guarantees cross-ventilation, while the low height avoids casting too much shadow. 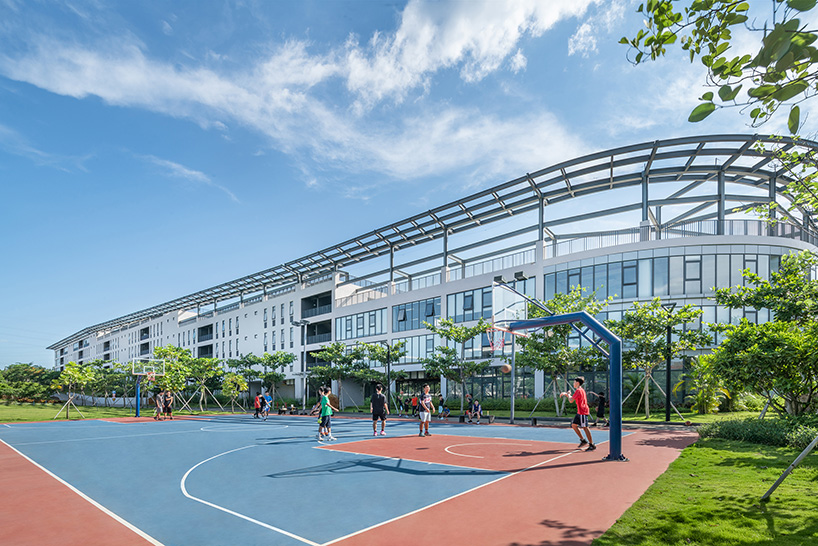 the dormitory complex, which is already finalized and in use (except for its roof canopy), consists of four blocks for four different age groups. each one of the individual units has a large courtyard in its center, for socializing and resting. palm trees were planted in the basement underneath, appearing from below through holes in the ground. the skeleton and main structures of the learning center, as well as the sports and arts center, have already been completed and it is expected that they will be put into full use before the end of 2021. 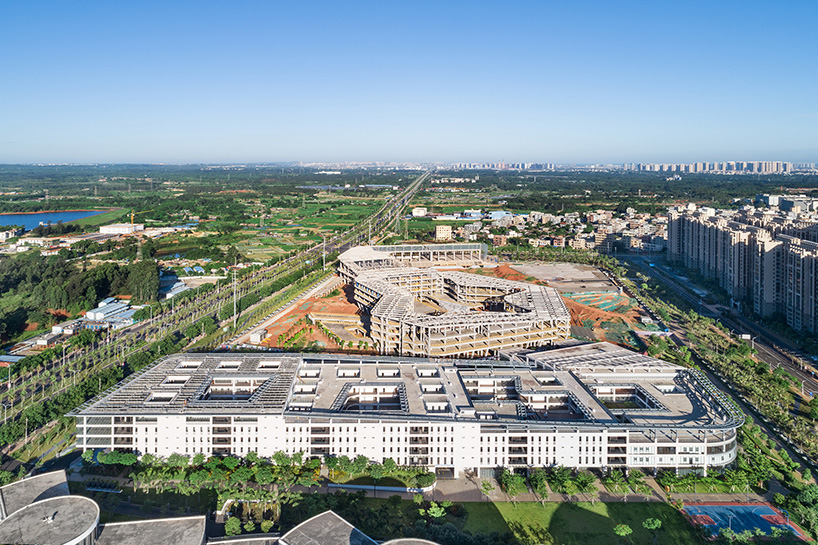 ‘when we were approached to cooperate on what is our largest project to date, creating a human environment became for us an even more important element,’ says binke lenhardt, founding partner of crossboundaries. ‘the project allowed us to prove that even on a huge scale, one can still create an environment that initiates interaction and communication, and inspire and guide students to explore and learn.’ 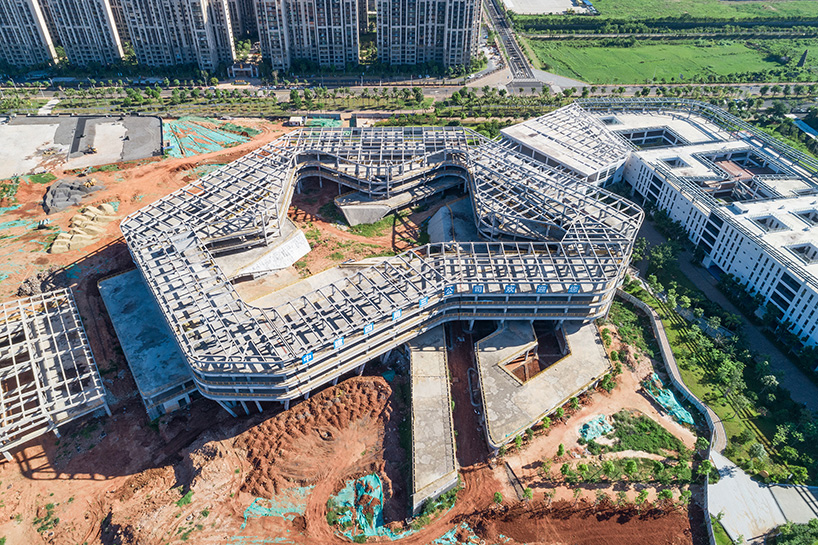 ‘for us, schools are in a way the most influential building types in terms of having social impact on people’s behavior and lives. we strongly believe that spaces shape people,’ continues hao dong, founding partner of crossboundaries. ‘this is another one in a series of school projects crossboundaries realized, where we created a learning space, that is engaging and influencing students to develop and to achieve their goals, a space that proactively tries to facilitate this process in the best possible way.’ see more projects by crossboundaries on designboom here. 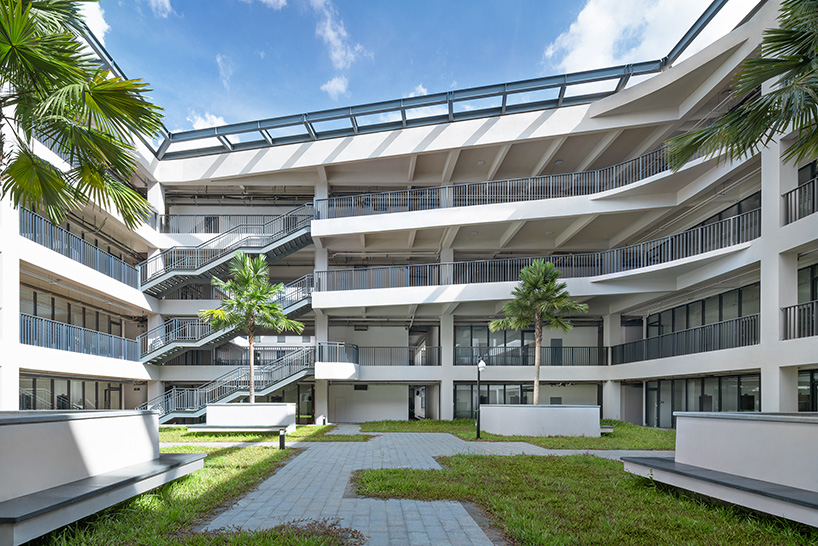 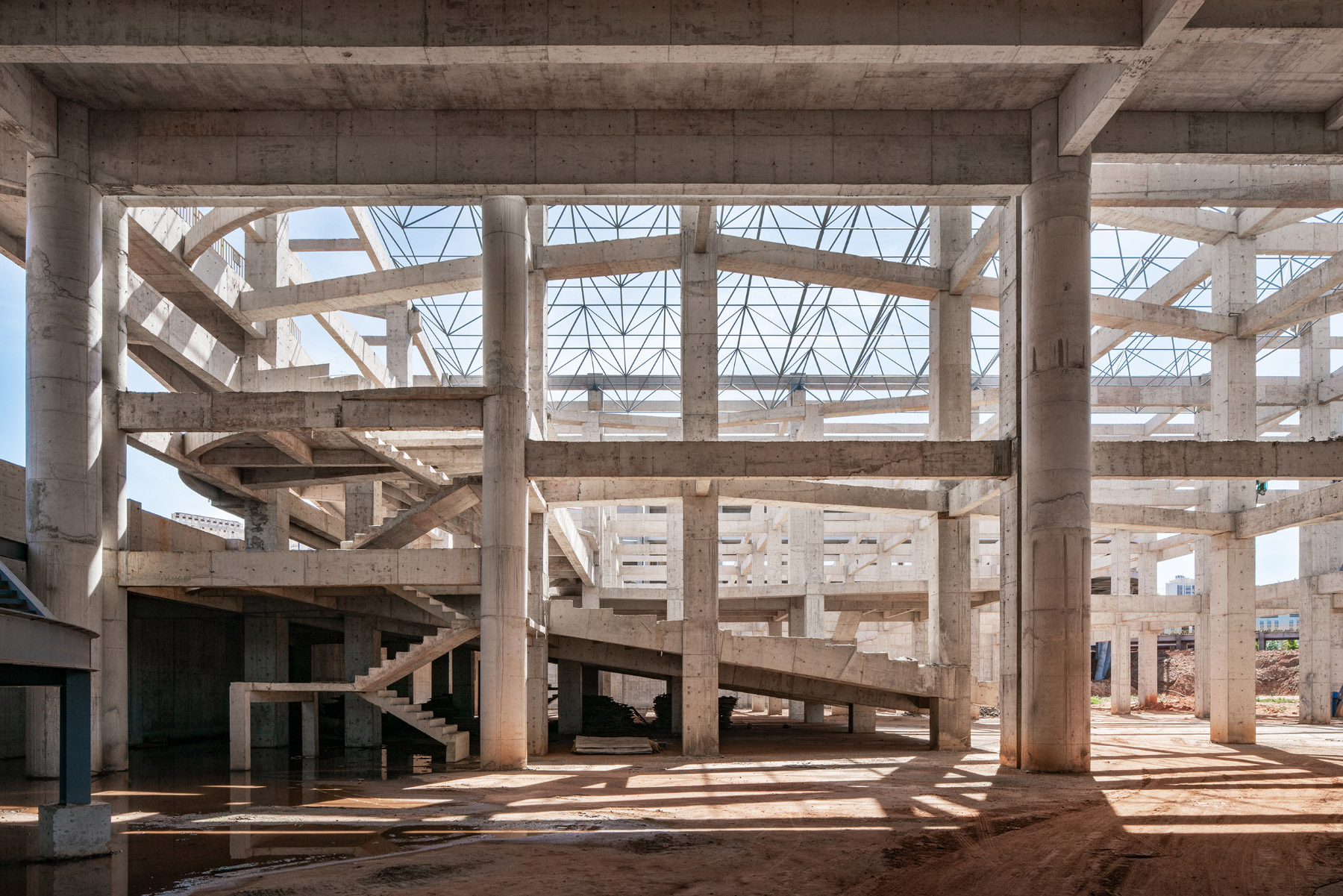 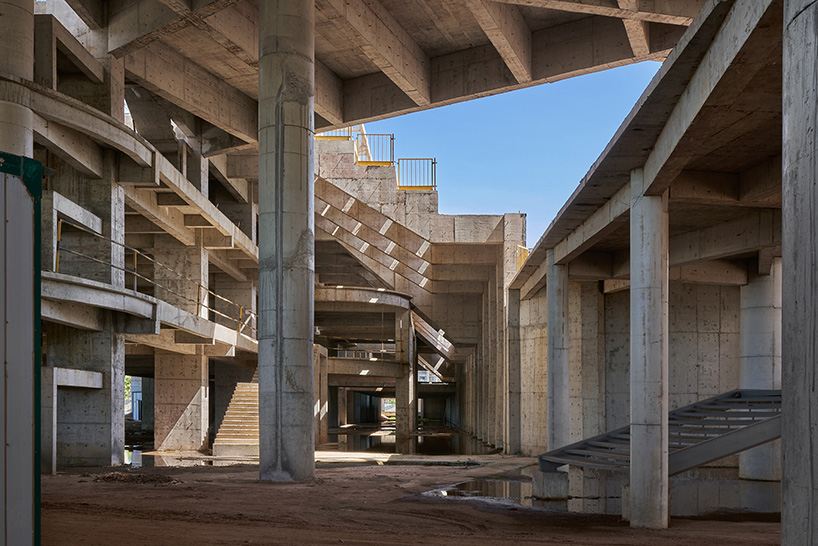 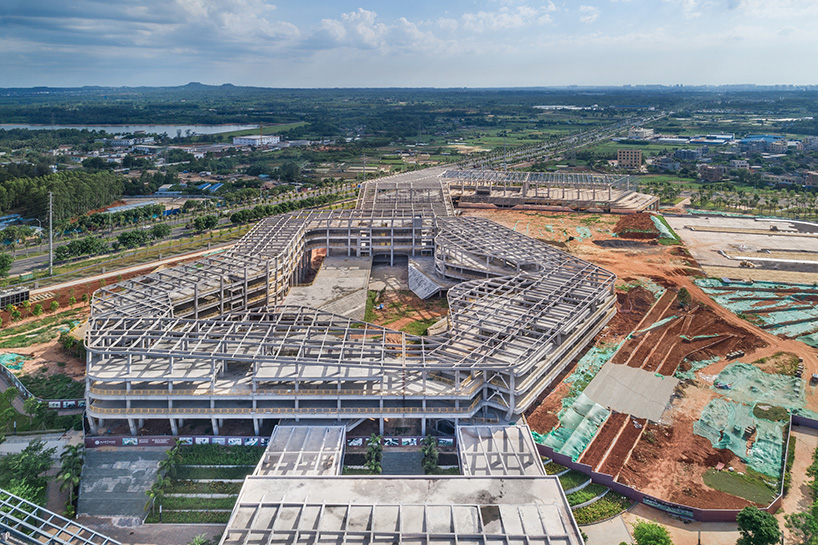 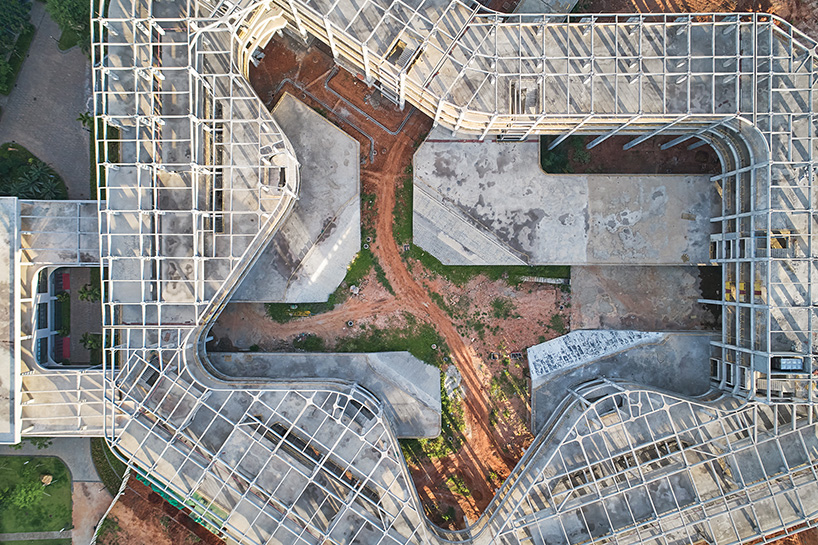 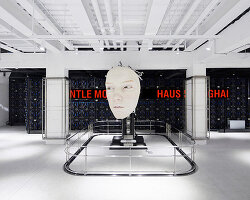 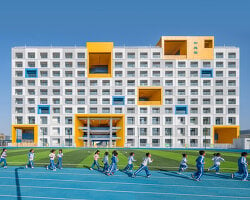 May 06, 2021
interview with crossboundaries: 'architects can do so much more to influence our environment positively' 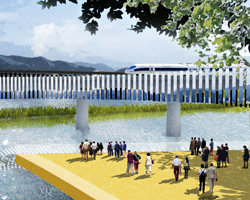 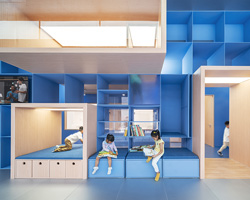 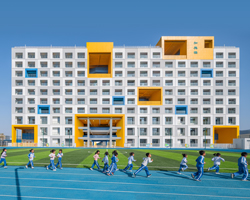 May 05, 2020
crossboundaries completes prefabricated jinlong school in only 13 months