following the success of award-winning projects such as the smog free tower and icoon afsluitdijk, dutch artist and innovator daan roosegaarde announces the start of a new large scale project titled ‘space waste lab’. the long term program aims to create a new perspective on space waste, a pressing issue that the majority of the population is not aware of, by dealing with in three phases: visualizing its location in space, capturing it and doing something with it.

ahead of phase one of the space waste lab, which will take place at KAF in almere from 5 october to mid-january 2019, designboom sat down with daan roosegaarde to learn more about the space waste project. 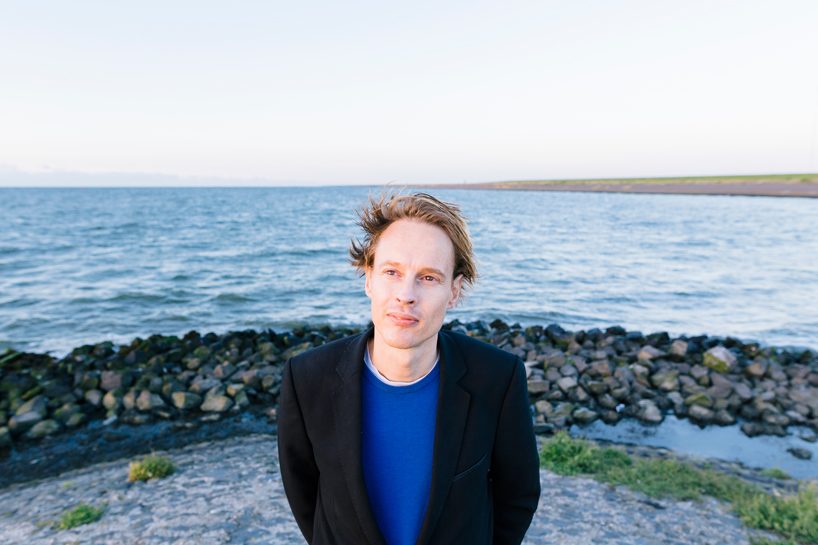 designboom (DB): now that the smog free tower is complete, how does it feel to start over again?

daan roosegaarde (DR): I love that I can say that I am an expert in smog, I’ve been working on it for three years very intensively, I’ve read all the books, I’ve met all the people, but I’m an amateur again in space waste. it’s a very ambitious project but I like it, we created the problem so we should also fix it, it’s a sort of responsibility. and it’s funny because it’s almost like a puzzle, like an itch you cannot scratch! I find it weird that we accept it, or that we don’t know about it. I think when you launch a new project, at the beginning people will say it’s not possible or it’s not allowed, like in the case of the smog free tower: now we have governments saying, why didn’t you do it before, or we want more, speed up! and I think we’ll have the same ungratefulness of innovation encounters with this project but that’s part of it, it’s part of the journey we’re in. 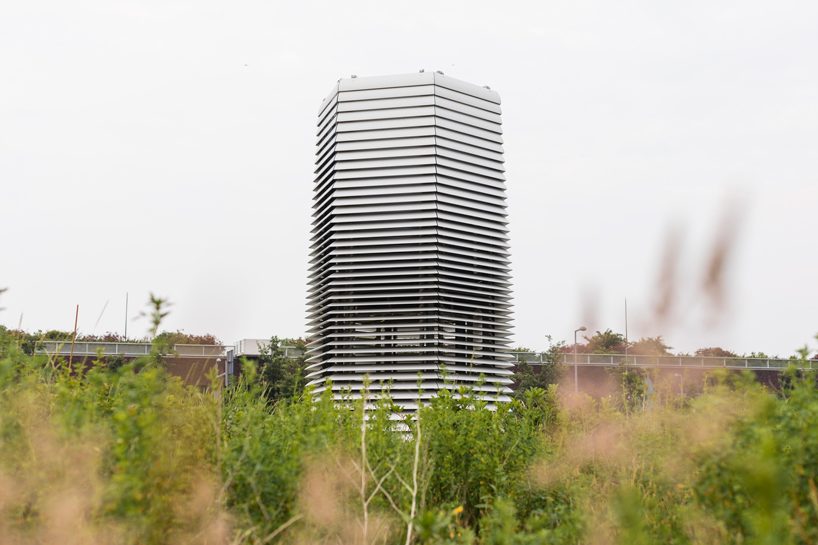 DB: so how did the idea for the project come about?

DR: I saw an image of space junk one day at the studio and then we started talking about it with the team. we’ve done the smog free project, taking something shitty and turning it into something beautiful, or meaningful – can we apply it to space? see, we’re not satisfied with ruining planet earth, we just keep on going further! at the beginning everybody thought I was crazy, that it will cost millions of euros, and that there are very smart people already working on it so they will fix it. and then we started doing our homework, talking with these people, calling them, having meetings… the initial conversation started 13-14 months ago and now we have people who want to invest in it and make it happen – now it’s a project! 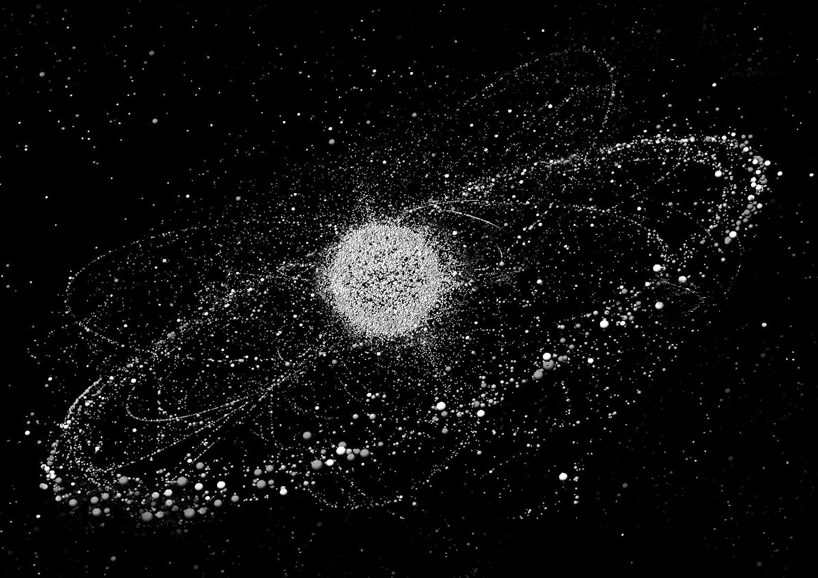 DB: how is space waste a threat to earth?

DR: basically you have a layer of junk around planet earth, it’s a whole index of very small and large particles but even if a really tiny particle hits an existing satellite, the satellite will crash, so it’s a problem. it’s really weird because they are able to track 29,000 particles larger than 10 cm real time, but if it’s smaller than 10 cm they can’t. yet even a tiny particle can still, because of the speed, be lethal.

DB: and what is the space junk made of?

DR: it’s all human, yes, we caused it. because there’s nothing in space, so this one, for sure we can blame nobody but ourselves. and if this keeps on going, a sort of effect pops up which is called the kessler syndrome, named after an astronaut who calculated that if we keep on going more particles create more collisions in such a way that in 10-15 years there will be so many particles that we can’t launch missiles anymore without them being severely damaged. so basically, we’re trapped. imagine you have planet earth floating in the universe and, as far as we know, the universe is more or less endless with billions of stars, and somehow we found a way to create this layer of junk and to trap ourselves. that madness triggered me to say, we should really do something about that.

DB: it’s very interesting that you are starting the project by visualizing space waste, because a lot of people are not even aware that the problem exists.

DR: I was the same, it just happened that I saw it – but the moment europe has no facebook for five or six days because the satellites are down, then everybody will realize and they will have to fix it in a week!

so to visualize it, we start by taking 1% of the 10 cm large particles that we know where they are exactly, and we are going to visualize their location. we have done the first prototypes and we have done a lot with LED and tracking, we have these particles at 200 km of height and we track them in real time. it’s some sort of pyramids of light which scan the sky. we did some tests in the middle of the night last week, in the middle of nowhere and it was really impressive to see this, it was like some sort of lighthouse beam scanning the universe. so it’s live information, we’re tracking it in real time and in case really big junk comes towards the space station they have time to maneuver away – and that actually happens three or four times a year. these site specific installations will be launched later this year in almere, it’s also the place where they will have the world horticultural expo in 2022. we start now and in 2022 we want to be finished with the project. we are doing an exhibition next to the outdoor installation in a museum where we will show a real piece of space junk which we are now trying to get from somewhere in argentina. 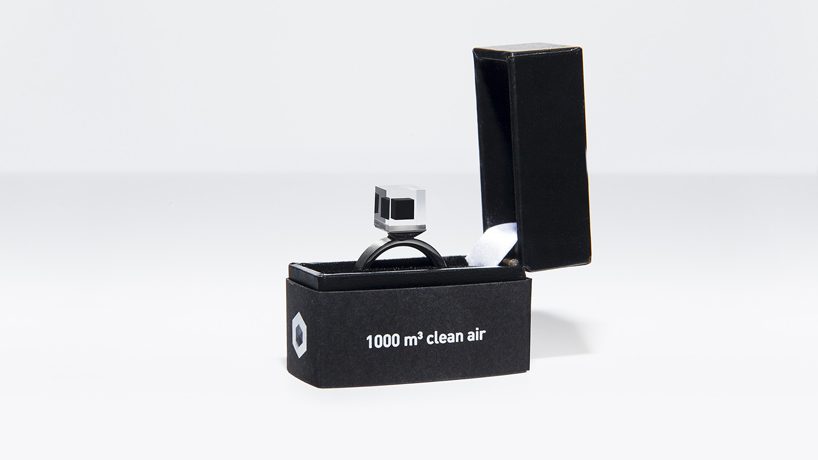 DB: I’m curious to see what you will do with it.

that’s the interesting part, because that’s where we can contribute as designers. the ESA and NASA will probably say, ‘we’ll send the satellite to pick it up – no, that’s too expensive, so we’re not going to do anything – but we need to do something.’ you need to bring new values, like in the case of the smog ring, suddenly the ring became something precious, so you need to transform it into something different and add a value to it. and then it gets a new meaning and then you get a chance to make it happen. right now we are asking questions like, how can we visualize it, how can we capture it, because there are a lot of ideas but nothing has been proved, or, can it maybe be an ingredient? should we bring it back to earth or can we mine it to build something on a different planet? are we bringing it to earth to burn it and recycle it, or are we taking it somewhere else? at the end of the exhibition in almere we will have a big symposium to show the results. 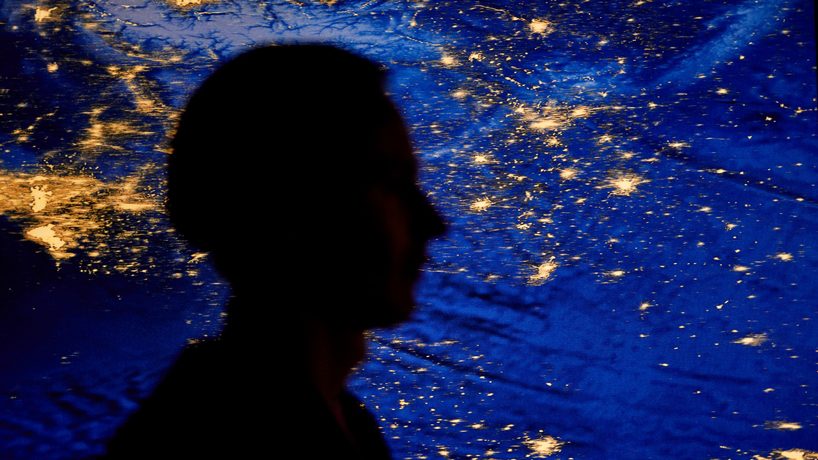 DB: you might be the first one to build something in space…

why not? it’s very simple, we either bring it to earth or do something with it in space. because there is an international consensus that you don’t push it away to space – then you’re just avoiding the problem – everybody said that is the worst idea. so then you have to think what to do with it…

the space waste lab will take place at kunstlinie almere flevoland (KAF) in almere from 5 october to mid-january 2019.