london-based daewha kang design has recently completed a mixed-use building in paju book city, south korea. the simple block of stone and glass creates a bold visual statement with its pure lines and rich texture, standing out from the eclectic surrounding buildings. as the home of a publishing house intent on telling the stories of the unsung people of twentieth century korea, the building’s key feature is the hundred-year old staircase, a glazed structure wrapping around a bookcase with one shelf for every year of the last century. 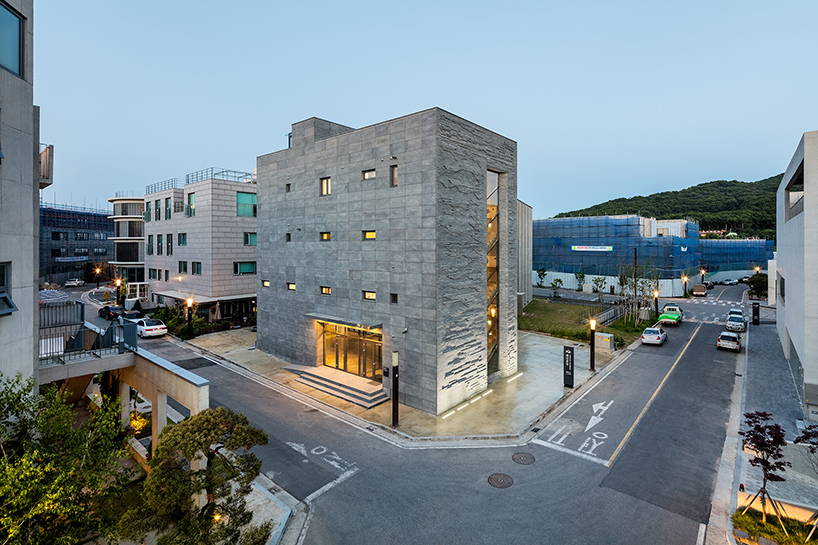 the rainbow publishing headquarters by daewha kang design features a gallery on the ground floor, office spaces on the middle levels, and a residence on the top floor. the challenge of the project was to create a dramatic impact within limited means; simplifying the volume and focusing on the quadruple height space of the main circulation stair thus creates a sense of monumentality and strength. at the same time, subtle use of texture and rhythm adds layers of richness and meaning to otherwise austere forms. ‘the vision of the publishers is to produce small print run biographies of ordinary koreans who lived through the extraordinary times of the twentieth century, building up a country from one of the poorest in the world to a globally successful economy. their belief is that while the individual lives might be only small sparks of light, when collected and seen together they might come together into a beautiful rainbow,’ explains the studio. 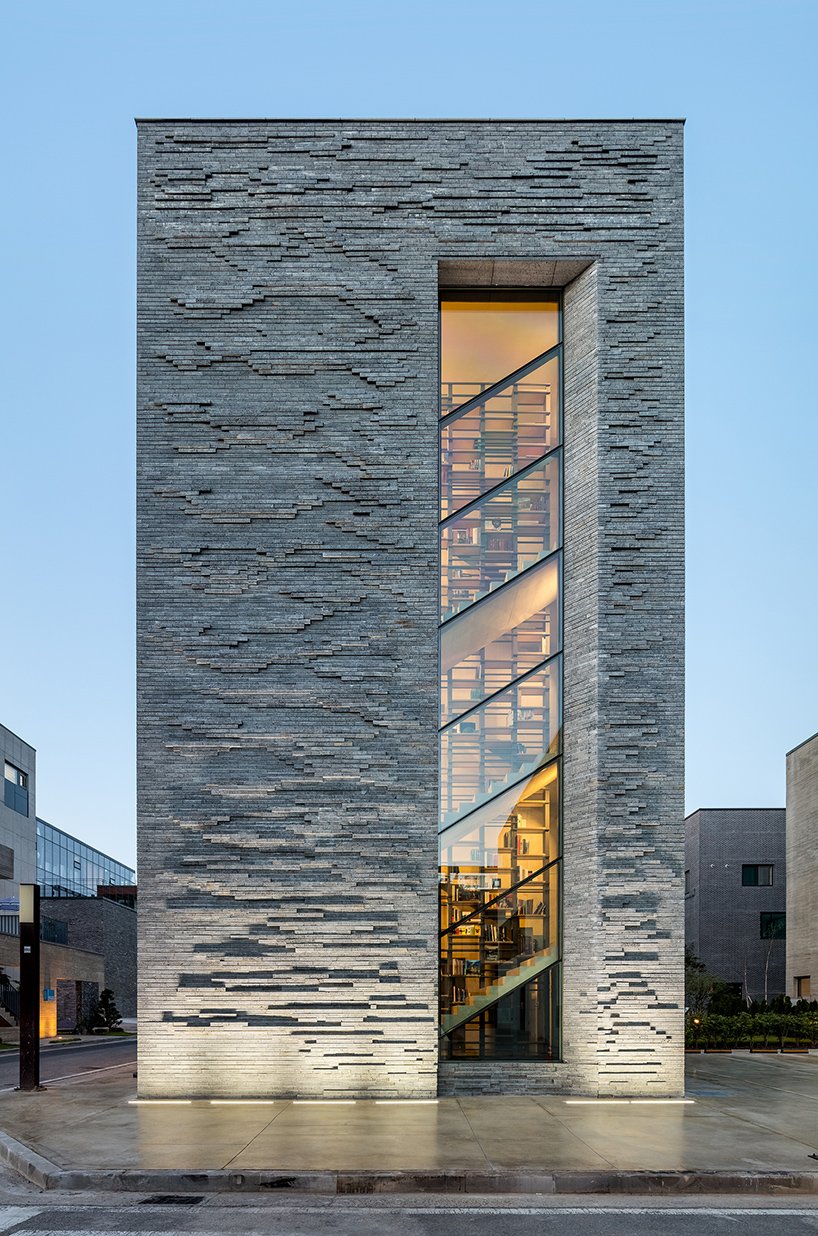 climbing the stairs, one meanders through the history of the country and its people

as for the staircase, it winds its way around one hundred levels of shelves, rising through the years from 1918 to 2017. as the publishers release each book, they will put the new biographies on the shelves corresponding to the years when their subjects were born. in this way, the journey through the building becomes one through the history of the country and its people. the stair is generated through a simple genetic algorithm that grows from the base to the top, branching out horizontally while reserving space for books for every year. the exterior façade has a similar logic of sedimentary growth, with volcanic stone bricks cut at three different depths, creating layers that echo the interior. recent academic research has linked stair climbing with longer life; people climbing five flights a day have been found to live 18% longer – making the staircase the most attractive space in the building. this encourages the family to take the stairs to the top floor rather than the lift.

an interactive application at the top of the stairs allows the four family members to tap in each time they reach the top of the headquarters. this helps record their total progress over the month and encourages them to compete against one another. as the years go by, the data collected from this application will form another layer of living history captured within the building. 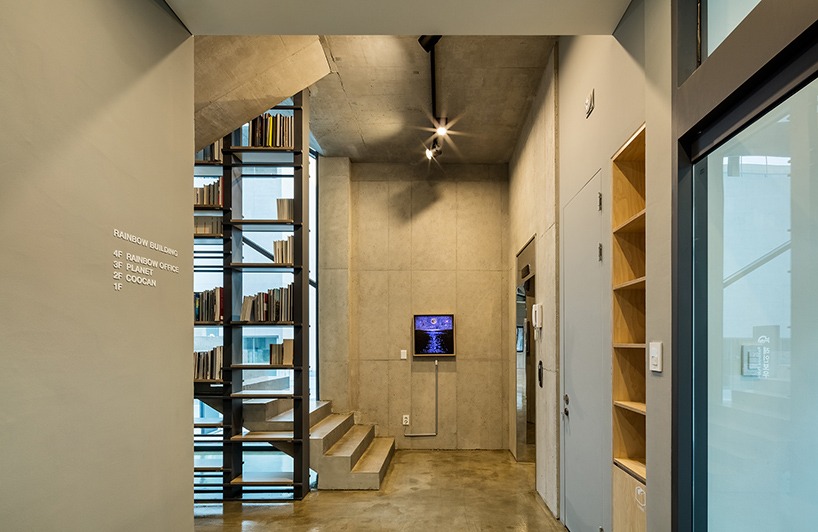 in the end, the aim was to create a timeless building, and the simple materials of hyeon-mu-am volcanic stone, clear glass, and steel were selected for their durability and variegated textures. although having simple volumetrics, the building’s siting and orientation respond to a rigorous analysis of the local climate. the long façade faces southeast, towards the best views and abundant but less oppressive light. the hundred-year stair faces to the southwest, giving good views to the wetlands and the rest of the book city through a gap in the urban fabric. the long façade also absorbs the winter sun, radiating heat to the garden while blocking the northerly winter wind. finally, small windows on the north facade minimise heat loss while maintaining cross-ventilation. 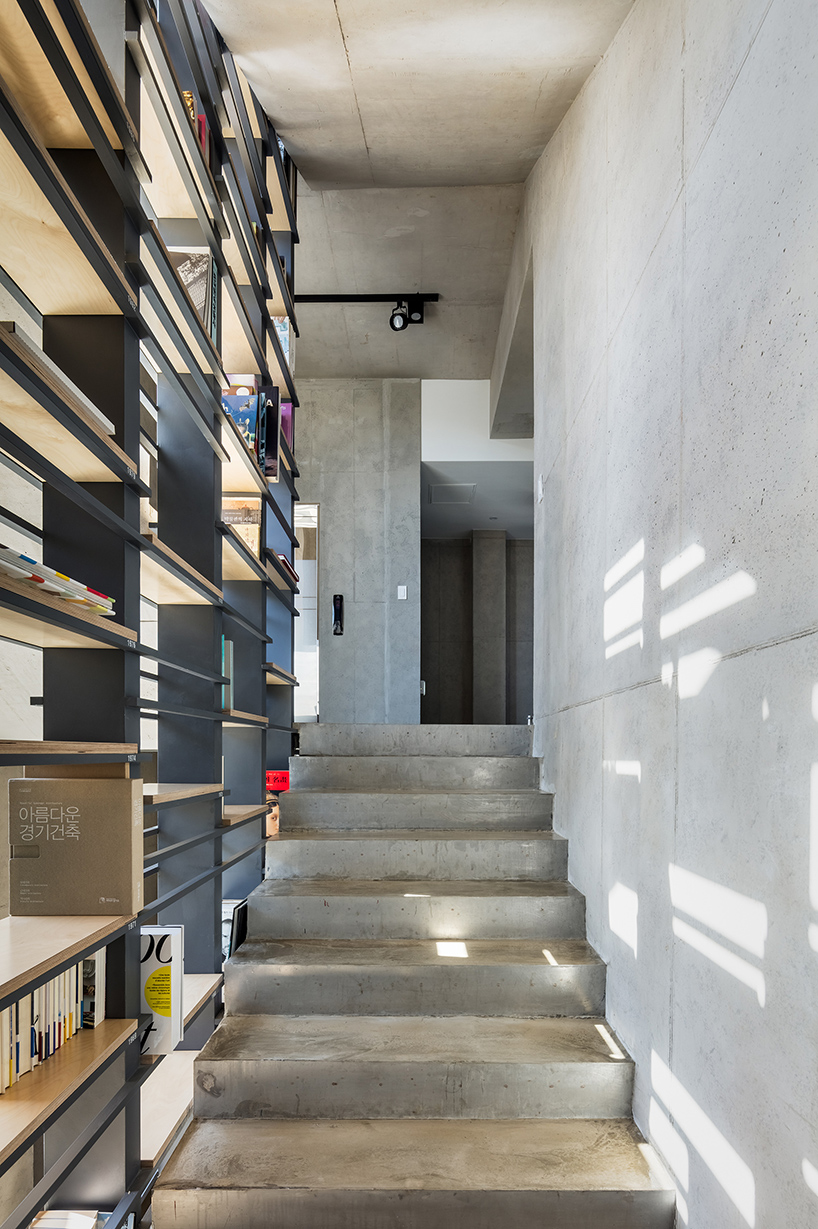 a genetic algorithm determined the pattern of the bookshelves, balancing a sense of order and organicity 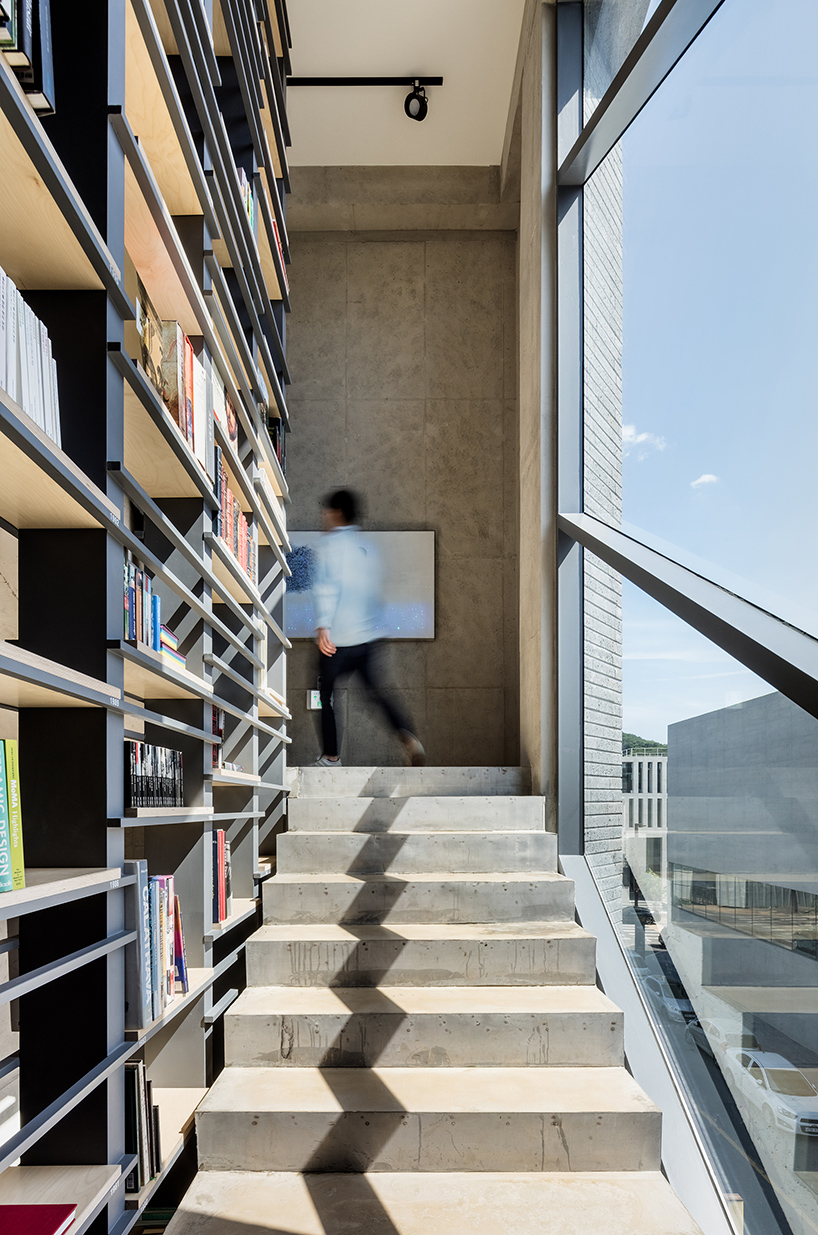 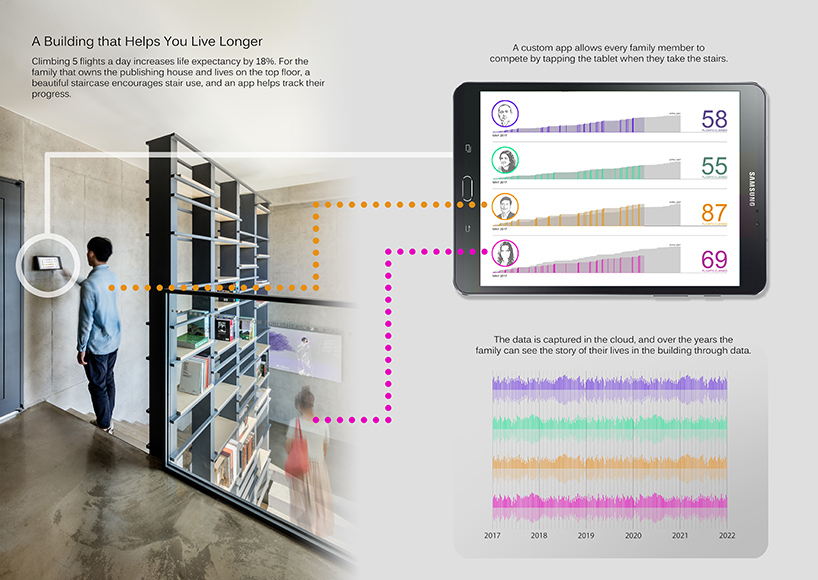 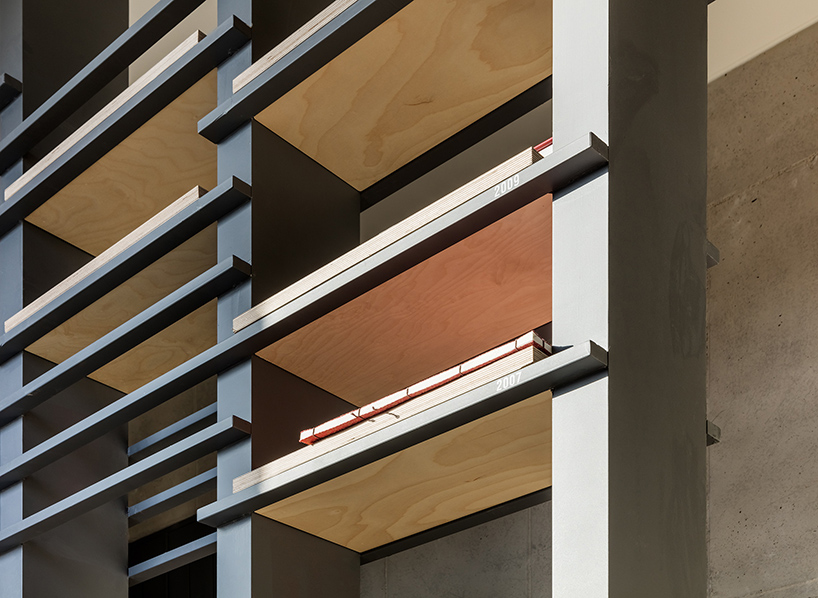 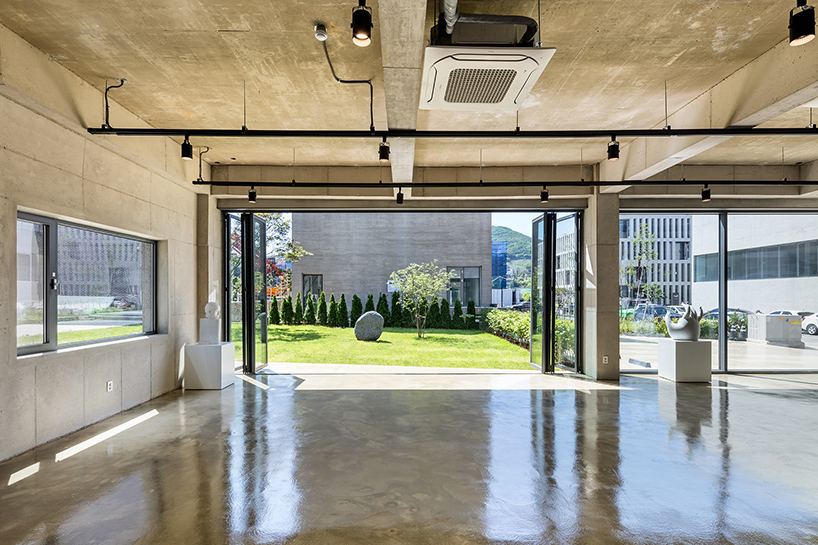 the building is open to the southeast and full of light 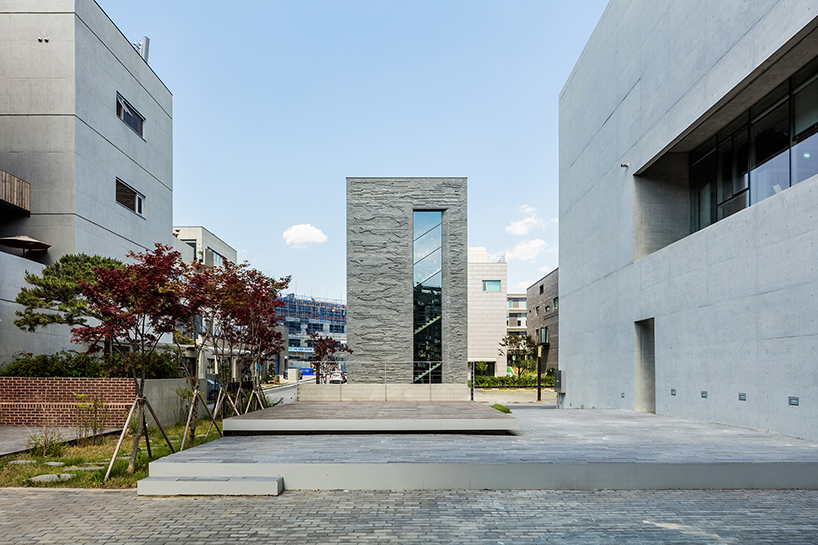 the building stands monumental and yet contextual within paju book city, near the border with north korea 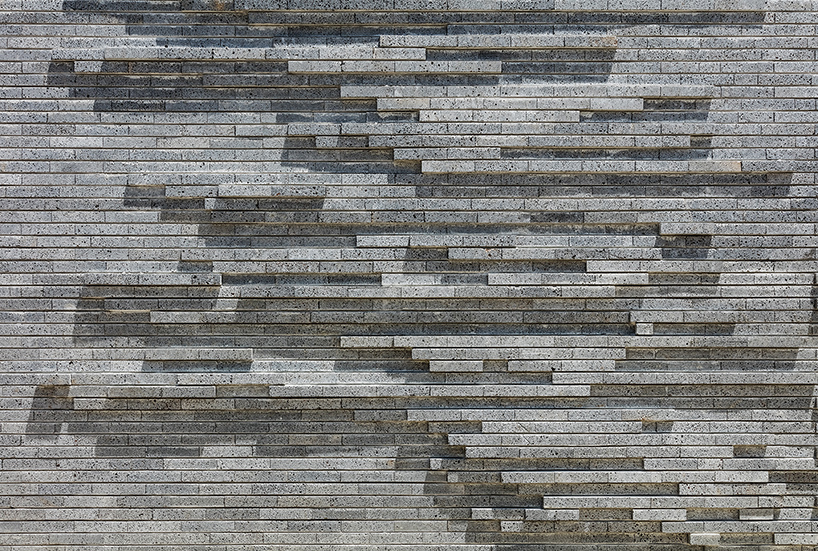 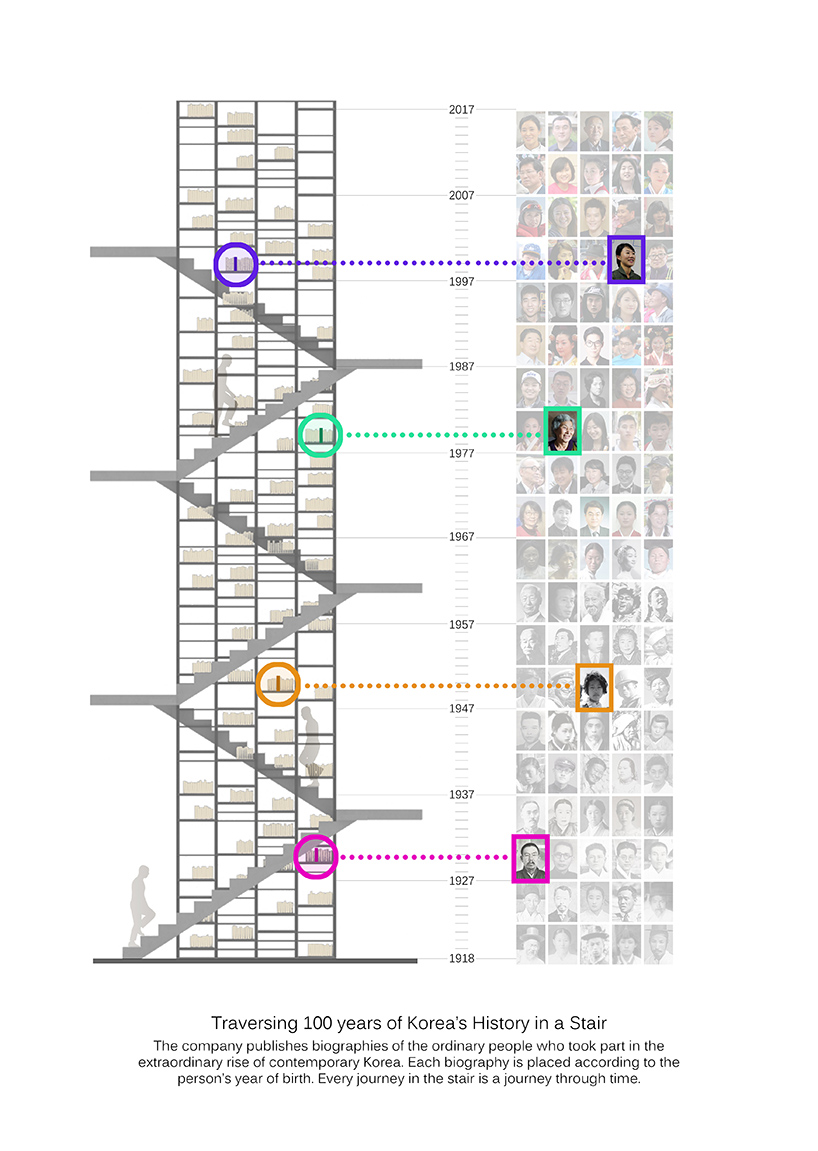 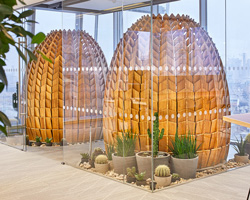 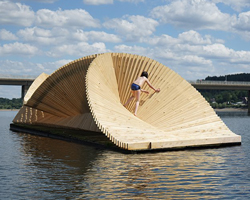 May 14, 2018
daewha kang design creates circe, a floating pavilion made of 278 identical pieces of wood 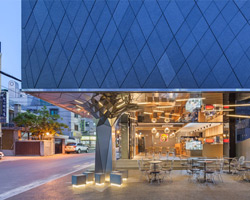