the studio of daniel libeskind has won an international architecture competition to build a mixed-use complex in vilnius’ business district. located at the heart of the lithuanian capital, the 20,000 square meter development is situated steps away from the city’s famous white bridge, neris river, and old town. the mixed-use buildings offer office space, a high-end hotel, dining, and public amenities.

‘the idea for the ‘downtown tower-K18B’ is to create a 21st-century landmark for the city, while integrating the surrounding context to complement the urban fabric of the historic city,’ explains architect daniel libeskind. ‘the design will create a vibrant mixed-use complex that will invigorate and enliven the development of the neighborhood.’ 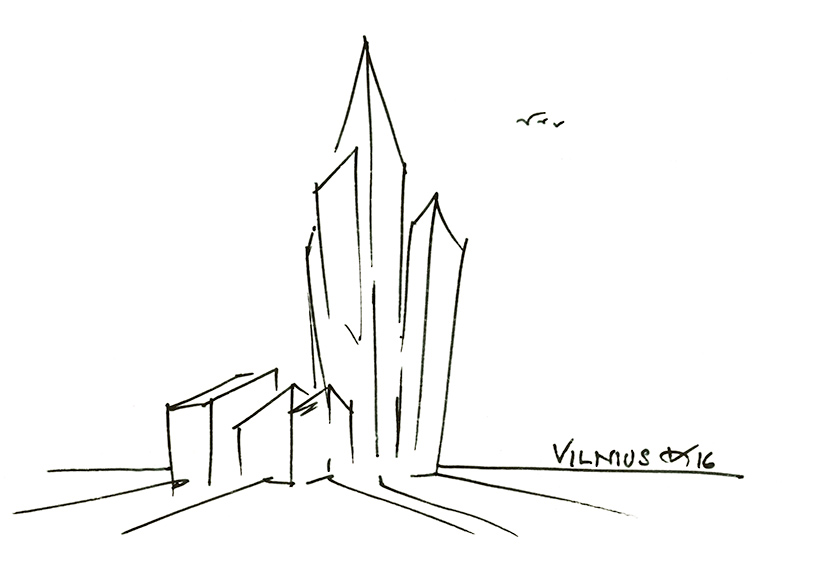 a sketch of the planned complex by daniel libeskind

known as ‘downtown tower-K18B’, libeskind’s design comprises an arrangement of glass volumes that includes an 18-storey tower set atop a 6-storey podium. the building’s ground floor hosts public facilities including a restaurant, bar, and retail outlets, as well as hotel and office lobbies. the multi-faceted glass structure reflects the light, sky and surroundings with a play of transparent and opaque surfaces. meanwhile, the scheme’s distinctive geometry seeks to create ‘a unique expression, enriching the city skyline and improving its multi-dimensionality’.

‘we are thrilled to have the team at studio libeskind on-board for this ambitious and exciting project,’ says marius zemaitis, fund manager at lords LB asset management and developer of the project. ‘with more than €40 million to be invested in the design and construction of the complex, downtown tower-K18B is set to become the anchor of the new city center.’

in lithuania, studio libeskind is also designing the modern art centre of vilnius as well as a sports and wellness centre in liepkalnis.