daniel libeskind has announced plans for two new projects in france: a 150 meter skyscraper at the heart of toulouse’s business district, and a mixed-use commercial center connected to nice’s thiers railway station. ‘with these important projects in two of the main french cities, we unveil our new development strategy to create urban mixed-use buildings,’ says philippe journo CEO of compagnie de phalsbourg, the firm backing both developments. 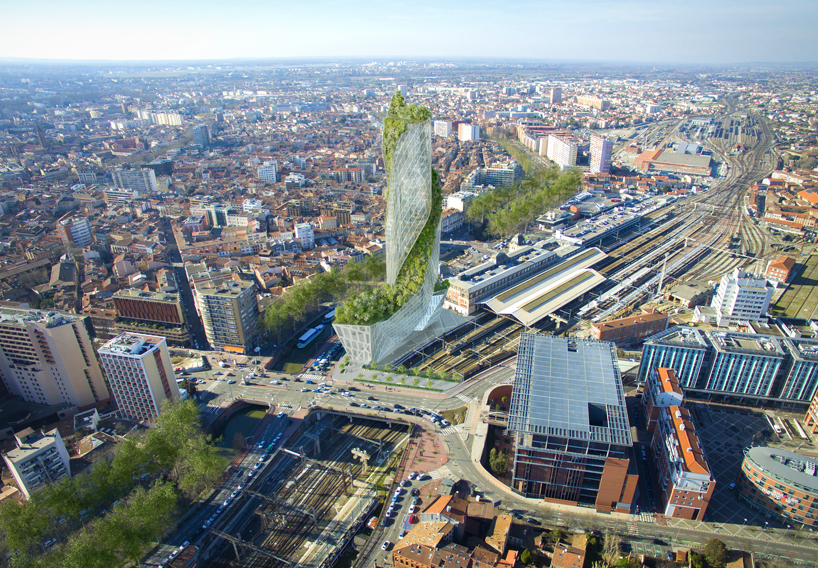 set to be toulouse’s first skyscraper, the daniel libeskind-designed ‘occitanie tower’ will rise 150 meters above the city’s business sector. the structure incorporates a spiral of greenery — designed by landscape architect nicolas gilsoul — that rises from street level to the 40th floor. the scheme comprises 11,000 square meters of office space, a hotel, up to 120 apartments, a restaurant with panoramic views, commercial space for shops, and offices on the ground floor for railway company SNCF. 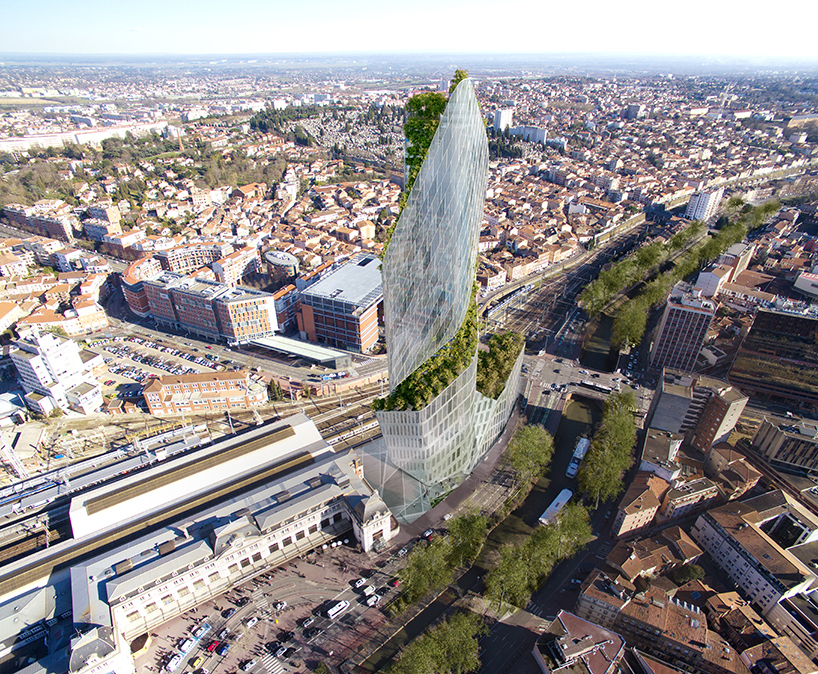 ‘with its suspended gardens that change color during the seasons, the slight silvertine of the glazing of the façade will reflect the pink tones of toulouse and the brightness of this material will change perception of the space, according to the variation of light,’ explains daniel libeskind. ‘the tower becomes a unique object in a vast urban space — the tower will not only become a destination, but also a defining public space.’ 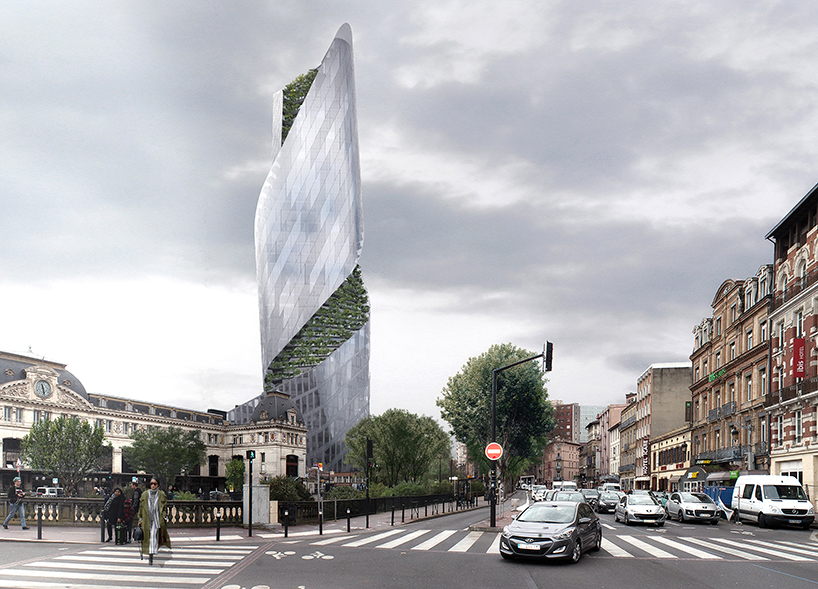 the planned tower is situated on the site of the former postal sorting center at gare matabiau, east of the city center, and offers views towards the pyrenees. ‘toulouse is poised to assert itself as a new business hub in the region,’ continues compagnie de phalsbourg’s philippe journo. ‘the occitanie tower will create both an iconic landmark for the city as well as create a strategic economic generator for the district.’ studio libeskind will collaborate on the project with local architect francis cardete, with a planned completion date scheduled for 2022. 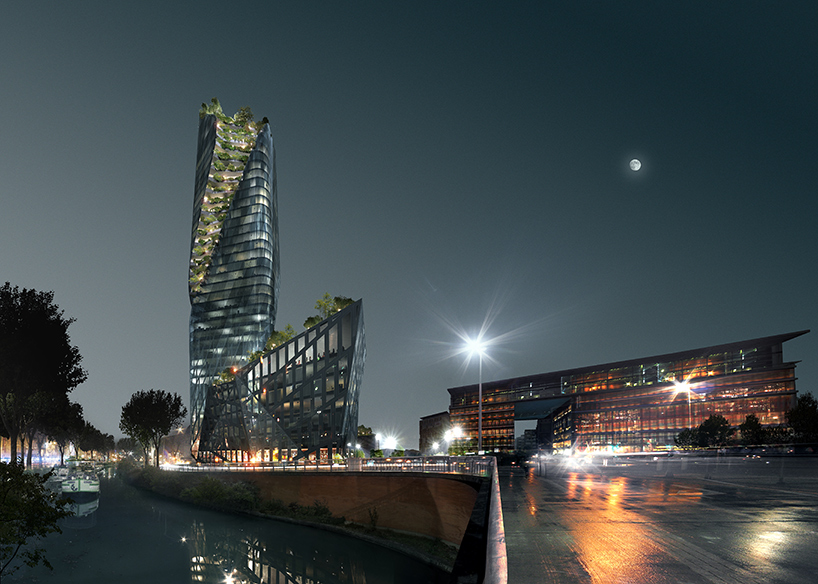 the scheme comprises 11,000 square meters of office space and a hotel
image by luxigon

550 kilometers east, in the city of nice, studio libeskind has collaborated with fevrier carre architectes and landscape architect jean mus to design the ‘gare thiers-est’ (east thiers station). the scheme, which forms part of a wider redevelopment, involves the introduction of 18,300 square meters of high-end commercial space, featuring shops and restaurants, as well as a hotel, a 600-seat auditorium, co-working spaces, and terraced cafés. 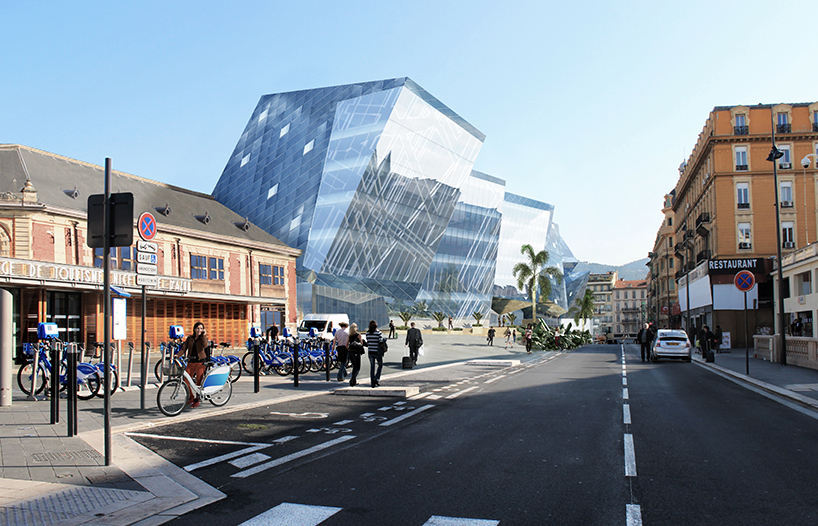 ‘this project represents the forward thinking of the city of nice to create a major architectural landmark and to rejuvenate the surrounding area near the theirs station in this historic city,’ says daniel libeskind. ‘my aim was to create a building that is seen from all angles — that will become the connective tissue between two sectors and reconnect the neighborhoods. it will serve to reflect the city, the light and the landscape.’ 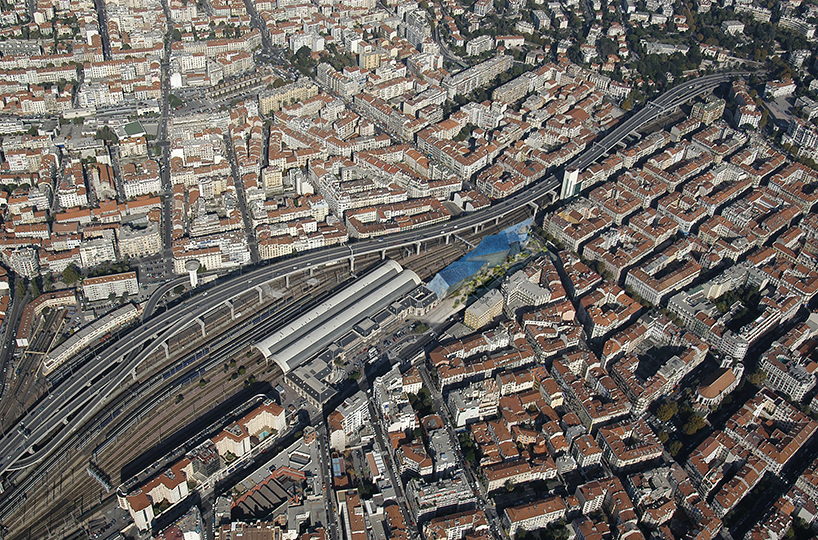 an aerial view of the site post development
image by morph

designed to reflect its surroundings, the building is inspired by the crystallized mineral forms of azurite. the multifaceted structure rises nearly 40 meters into the air, obscuring the rail tracks. construction is set to begin in late 2017 with completion forecast for the end of 2019. the plans for both projects were unveiled during the international property market MIPIM in cannes. 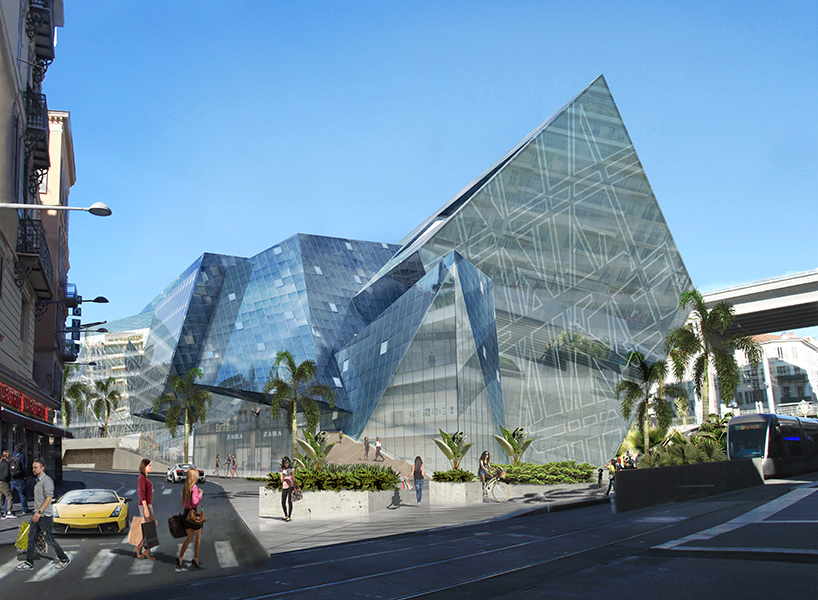 completion is forecast for the end of 2019
image by morph