david adjaye was commisioned by patrizia moroso to design the new moroso headquarters. the project site lies on the northern outskirts of udine along the arterial via nazionale route on the site of the ofﬁce and production facilities of the renowned furniture brand. the new ofﬁce headquarters are to be located in close proximity to the current production building, respecting the 20m setback from the main road as stipulated by local guidelines and – if at all possible – safeguarding the row of existing handsome trees.

looking like a translucent white cube, large cut glass will determine the lighting effect of the new structure. the walls are also coated with an opaque film stone thin enough for light to pass through.   conceived as a mixed-use project, the new building will house not only offices but also a new company showroom and space for social gathering: library, lounge bar, cafe and terrace.

the adoption of plant technologies, solar photovoltaic and will aim maximise energy savings. 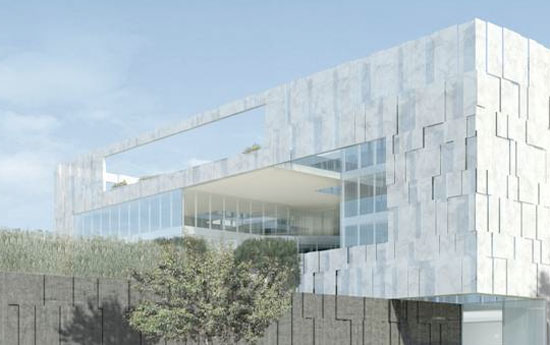 the site and its surroundings are characterized by a panoply of mainly low-rise commercial and industrial buildings along the main road and one- to three-storey residential buildings further inland. the overall area of the premises amounts to roughly 44.500 sqm with the new ofﬁce headquarters occupying the south-western and the new production building the eastern portion. the immediate surroundings are fairly ﬂat and in stark contrast with the 3000 meter high alps mountain range framing views looking east- and northwards.

a small village of houses the architectural concept they have developed is the creation of a very speciﬁc architectural gem which responds to the site, the brief and the moroso philosophy. the project has been organised in the manner of a small village of houses that sit on a communal base. the base harbours the public functions of showroom and presentation room with the office spaces nestled within the houses above. these are linked by bridges. on the top ﬂoor communal areas such as a lounge / library / cafeteria and a large roof terrace are proposed. the articulation of three blocks combines an intimacy of internal spaces with the beneﬁt of visual connectivity and excellent climate control. the positioning of the volumes, cores and cantilevers is in careful response to the suns daily movements, minimising glare and heat impact whilst allowing for adequate lighting conditions.

introversion the introvert nature of the project not only reﬂects the sense of togetherness of the moroso working environment, but also responds to site conditions and the issue of orientation. this introversion is juxtaposed by maximising visual relationships with the hanging garden and stunning mountain range to the north.

in-between outdoor spaces as a result of the articulation of three-dimensional volumes on a base and the partial wrapping of the overall form with the façade skin, intriguing in-between outdoor spaces become an important focus of the project. In combination with the sun’s movement an exciting play of light and shadow comes to the forefront, which is different every day.

volumes the central – south-facing – volume acts as the main distributor by housing the freestanding stair, the main void, lifts, restrooms and meeting rooms. the two other – east and west-facing – volumes are accessed via bridges and house the ofﬁces. 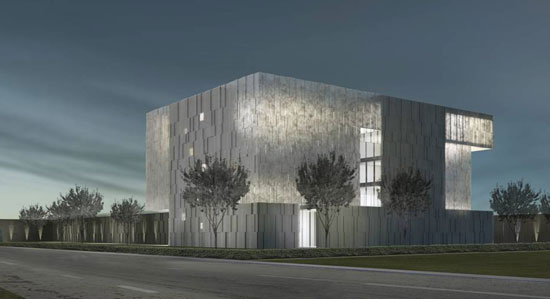 circulation the vertical circulation consists of a centrally located freestanding stair that acts as a main connector between the ground floor and the first floor ofﬁces and three generous enclosed stairs, which also act as escape stairs. this distribution allows short routes from one level to the next, complemented by 2 no. lifts situated in the central volume.

garden / terraces the boundaries between inside and outside have been blurred by introducing generous interlocking gardens and terraces, allowing outdoor spaces to become areas of meeting, presentation, inspiration, reﬂection, contemplation and relaxation. the new main garden consists of a wide 1.5m high perimeter hedge, a water feature and different tree species forming an arboretum in harmony with the existing trees.this is complemented by a hanging garden of ferns concealing the old production building and introducing a moment of quietness.

the outer appearance of the new ofﬁce building is characterised by nobility, a combination of translucency/solidity and a play of light/shadow. the external façade skin consists of white marble panels, which are staggered and set back, thus resulting in an intriguing day-and night time effect.

visitors coming from the client car park situated in the north access the building in its north western corner. staff members access the site via via dante and park their car in the underground parking garage located underneath the building. deliveries also access the premises via via dante.