[Other] ways to occupy public space observes and captures spontaneous and informal uses, activities, actions of occupation, and appropriation of public spaces. Developed by dérive LAB, the project takes shape as a series of photographs seeking to explore and understand other ways of living and acting within the urban web in Mexico.

People get familiarized with public spaces, often transforming them into open-door living rooms, retail spaces, or even massage rooms. Thus, this project is a documentation of current uses including those unintended, spontaneous, or unplanned that go one step further from the conventional functions we are used to seeing in such places. 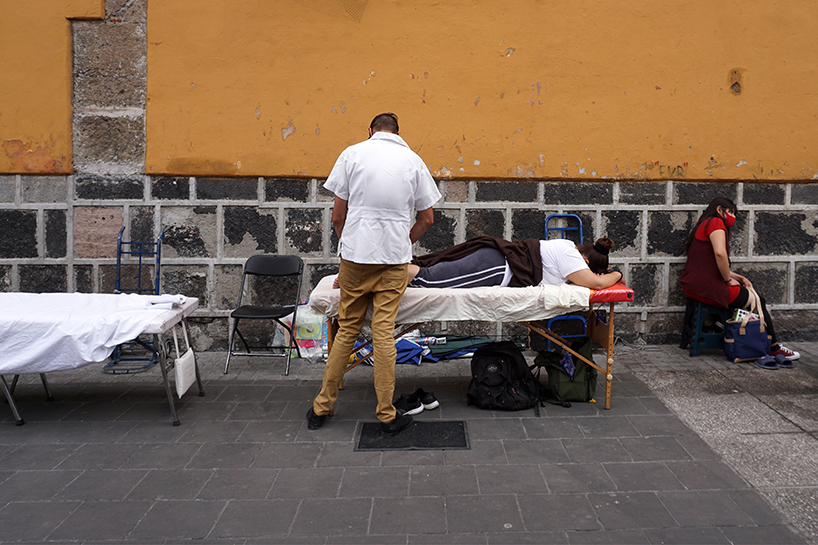 occupation no. 604 — a group of people offers massages in specialized beds located next to the Museo de las Constituciones in Mexico City

observing the relationship between people and space

To guarantee that these spaces follow the established and designed uses, the city relies on regulations, signposting, surveillance cameras, and the police; sometimes even the complicit observation of citizens, who validate which activities are allowed and which are prohibited. Thus, according to the architects (see more here), occupying public space in other ways includes an attitude of resistance, which brings the possibility of ruptures and emancipations, of liberating and uncertain spontaneity.

‘This is precisely where the value of an inventory of [other] ways of occupying public space lies; representing this great variety of activities, actors and objects that make them possible, generates a radiography of current urban daily life; a life that persists despite endless mechanisms to control it and attempts to disappear it. It consists of a catalogue of uses, objects, elements and actions of occupation and appropriation of public space, whose main objective is to critically analyze and vindicate forms and daily actions that give vibrance to cities and configure their public sphere.’ 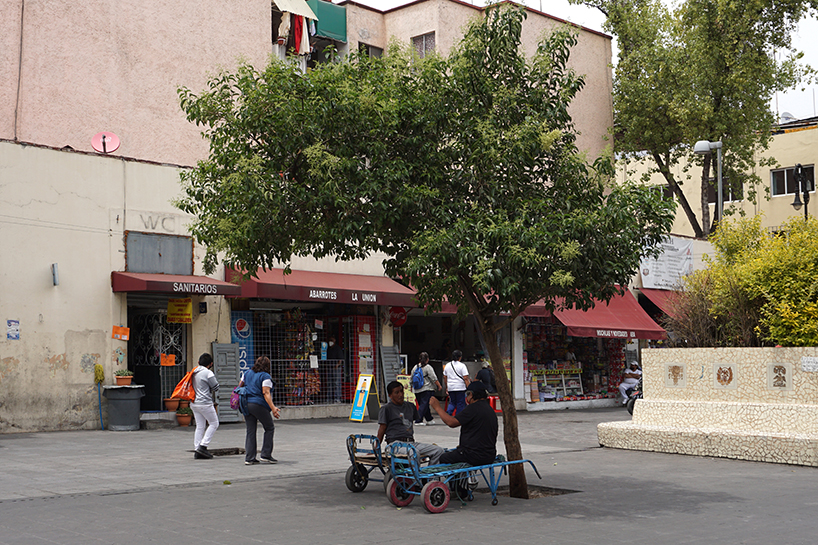 occupation no. 577 — two men chat while sitting on a pair of diablitos under the shade of a tree

classifying uses of the urban web

The project’s digital archive includes a series of photographs, architectural drawings, videos, sounds, and descriptions. The pieces have been organized utilizing a faceted and non-hierarchical classification, which is made up of a set of categories and subcategories. The categories consist of the following types of occupation: the character of the subjects or objects; energy, or any action that occurs with respect to them; space, the geographic component of the location of the subject or object; and time, a period associated with the subject or object. The categories proposed are: Geographical location; Temporality; Permanence; Activity; Type of occupation; Physical attributes; and Agents.

‘The use of this method of organization, in addition to producing a dynamic form of representation, has led to an analytical-synthetic process that consists of the identification of the concepts that constitute each category, as well as relationships among them. In addition, it presents a dynamic opportunity for continuity, in which it is possible to add concepts and relationships indefinitely, in case there are ways of occupation that have not been identified so far.’ 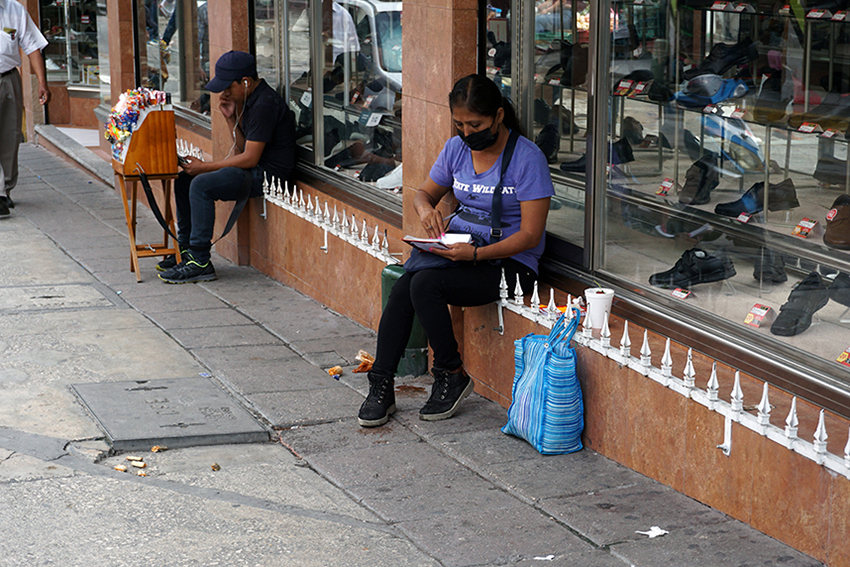 occupation no. 289 — two people sit on the baseboard of a store where metal spikes have been placed to inhibit this precise activity 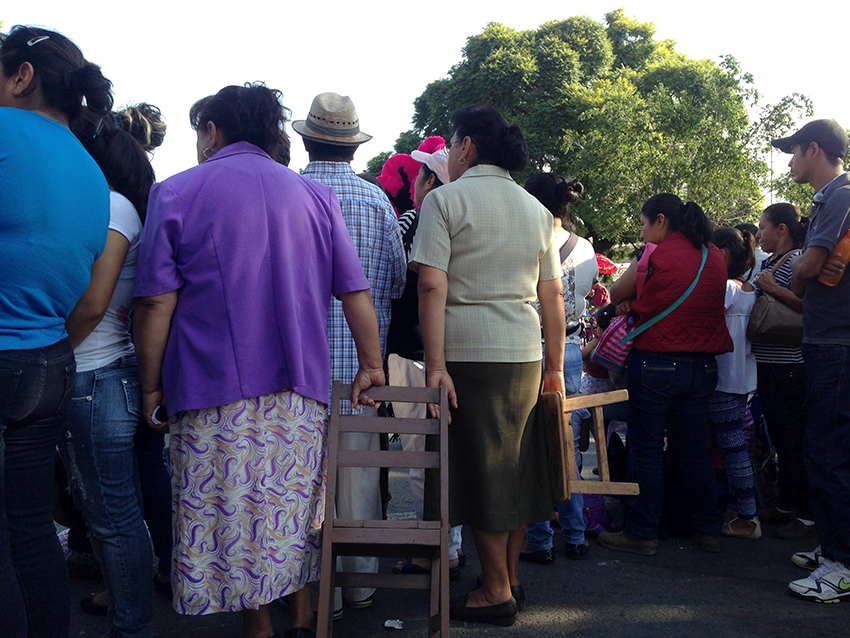 occupation no. 128 — two women move a chair and a wooden stool through the crowd to sit and watch the parade go by 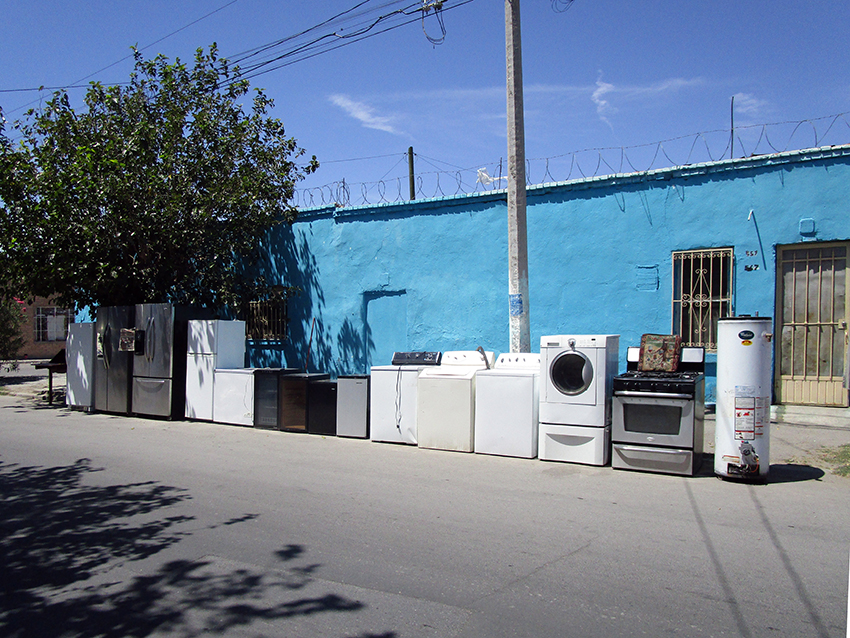 occupation no. 37 — a series of household appliances displayed for sale on the road 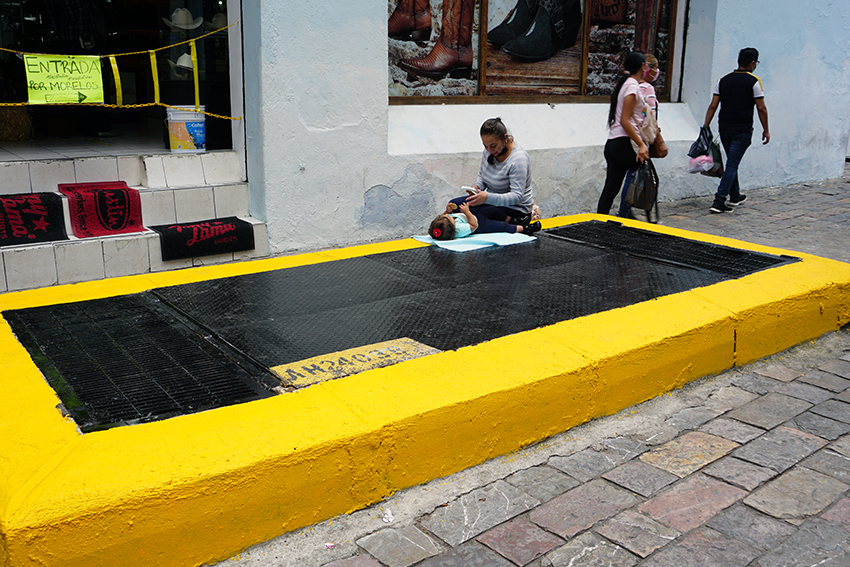 occupation no. 339 — a woman changes the diaper of a baby lying on a railway vent 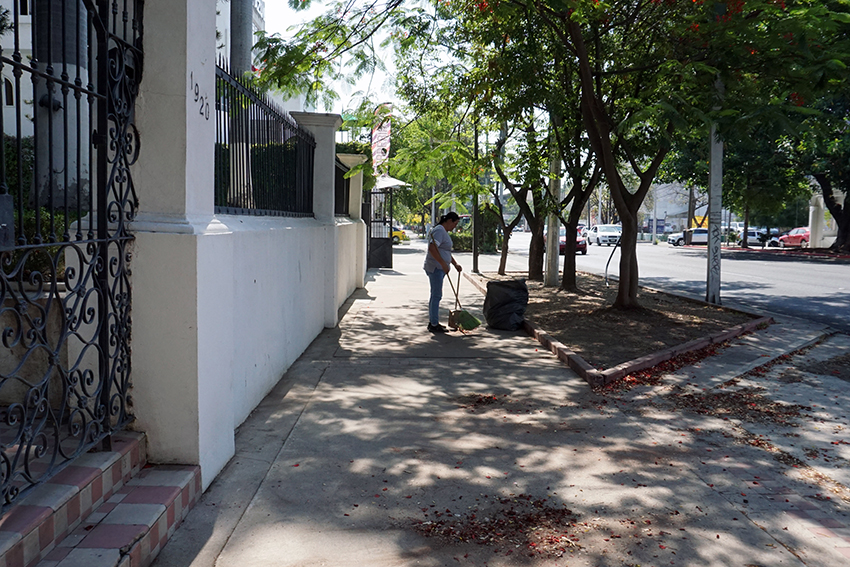 occupation no. 690 — a woman sweeps and picks up the trash from the sidewalk 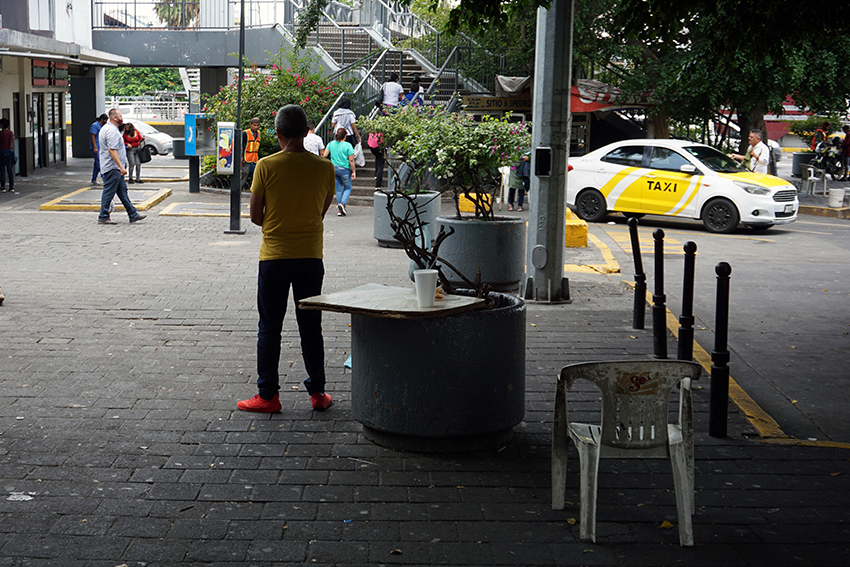 occupation no. 206 — a wooden board is placed on top of a planter to make a table on which to place drinks and food 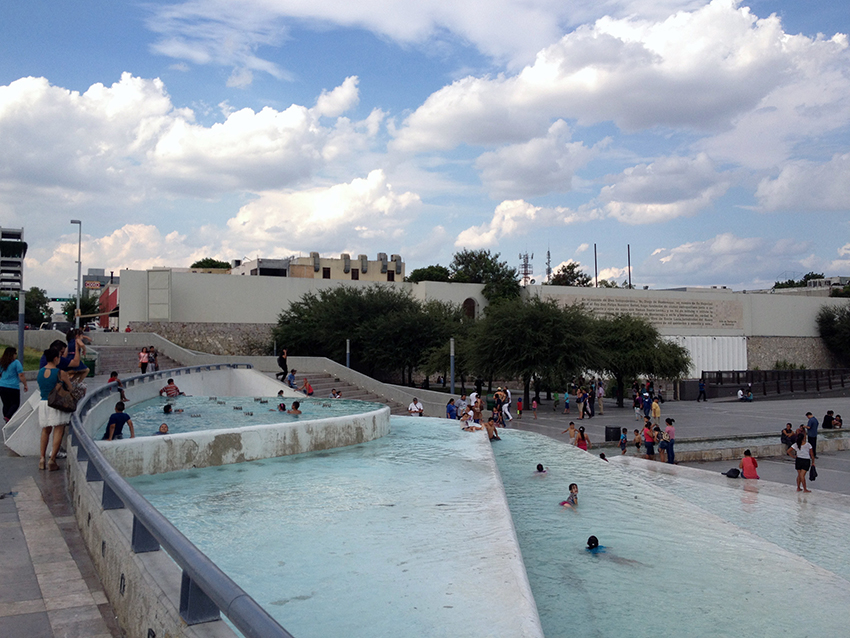 occupation no. 998 — children play and swim in the fountains of Paseo Santa Lucia in Monterrey 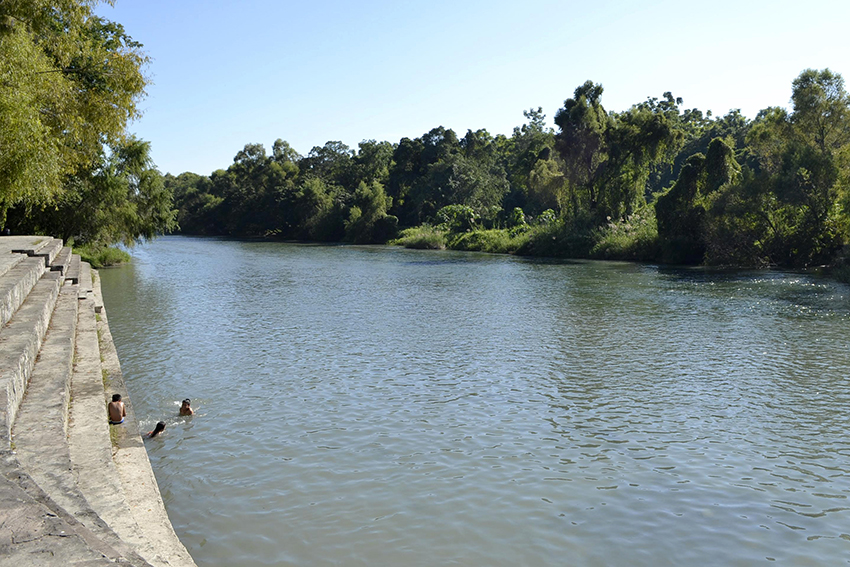 occupation no. 58 — three young children swim and play by the river occupation no. 100 — a man sitting on a stool and leaning his back against a telephone booth displays and sells old books in the window of Fantasías Miguel 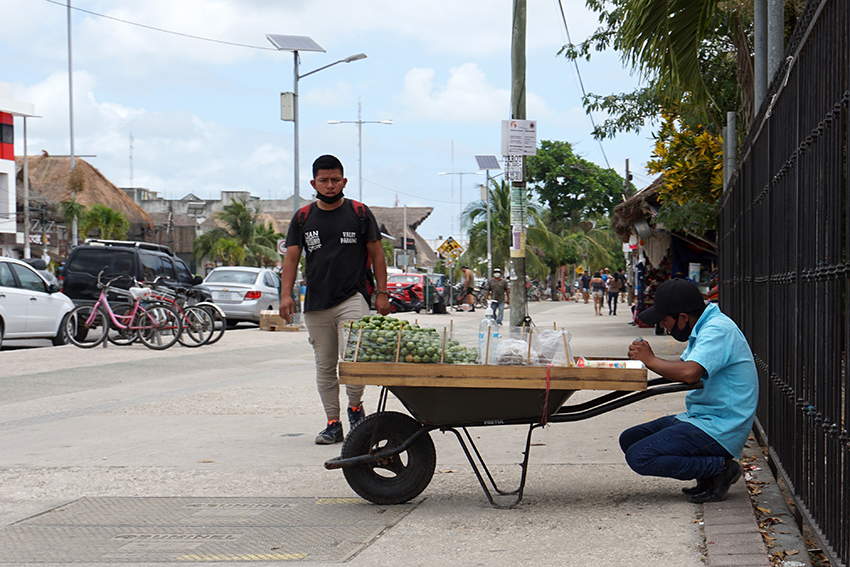 occupation no. 102 — a man sells lemons on the sidewalk in a wooden crate supported by a wheelbarrow 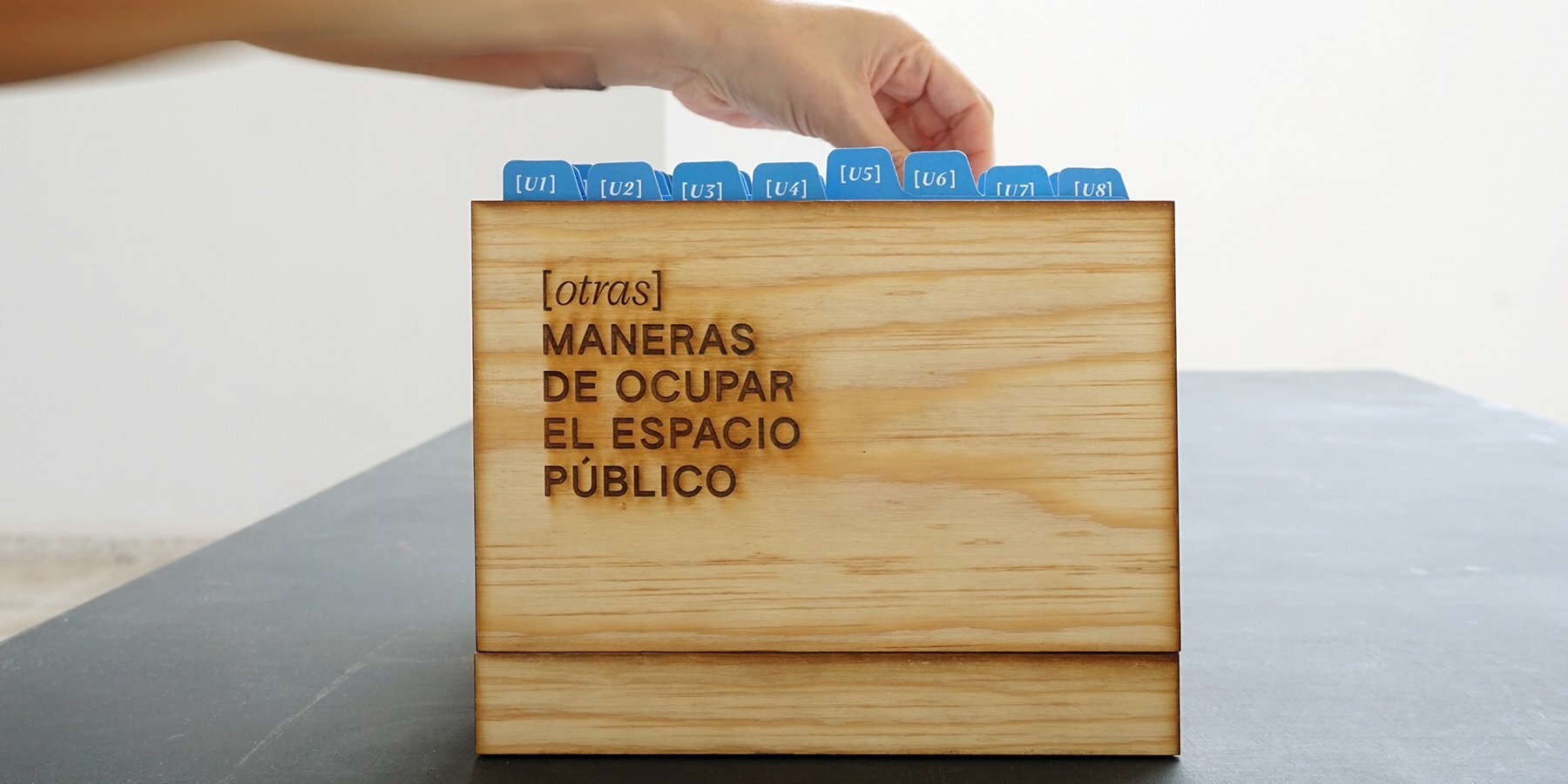 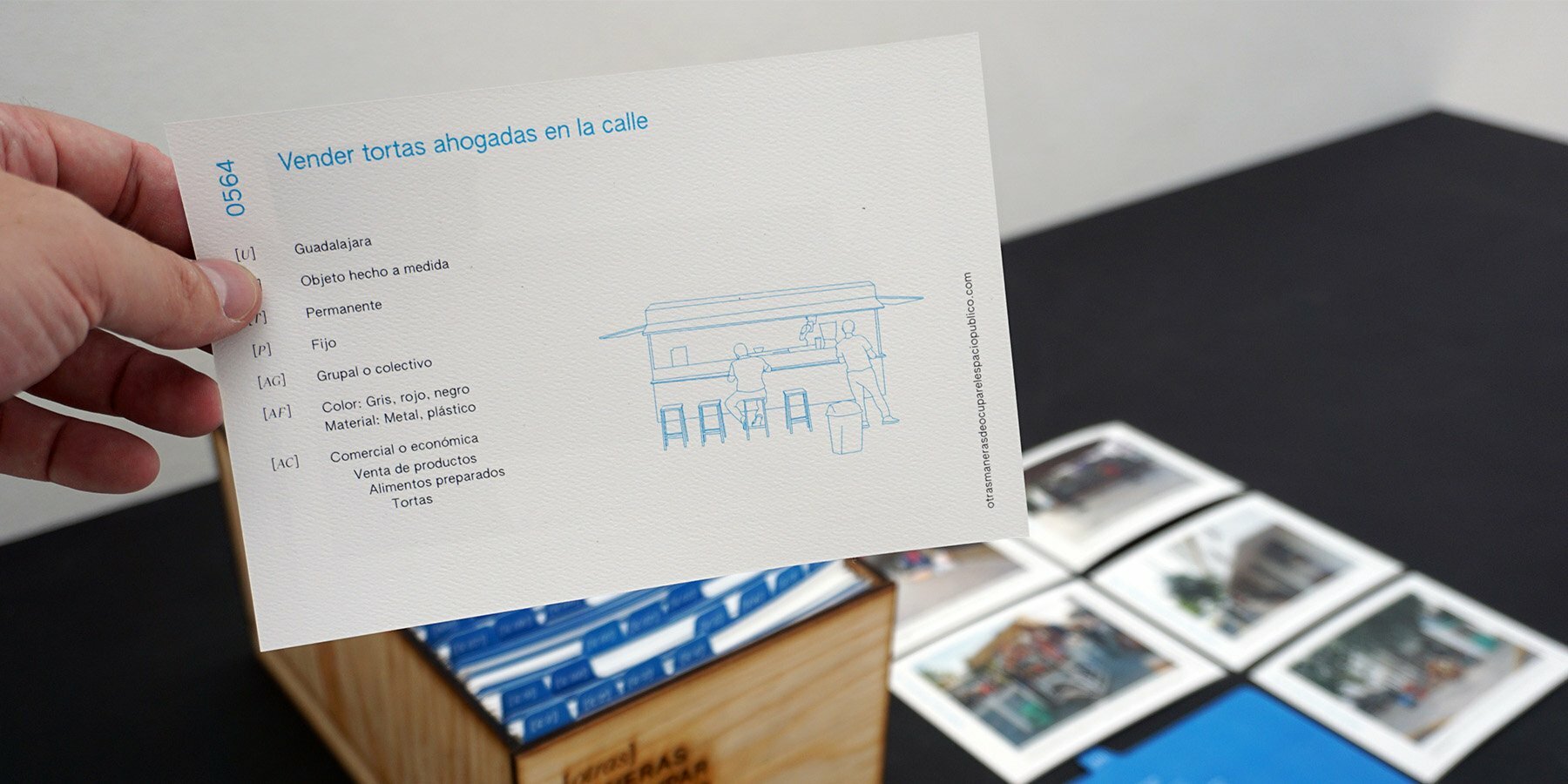