what kind of music do you listen to at the moment?I like bach and piano music. in my younger days I loved the beatles and bob dylan, but recently I like to listen to classical music.

do you listen to the radio?no. I just listen to cd’s. 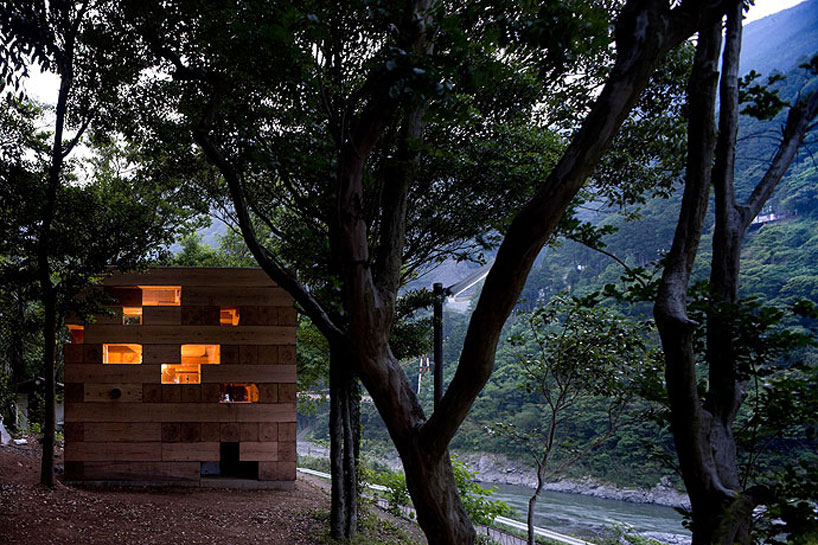 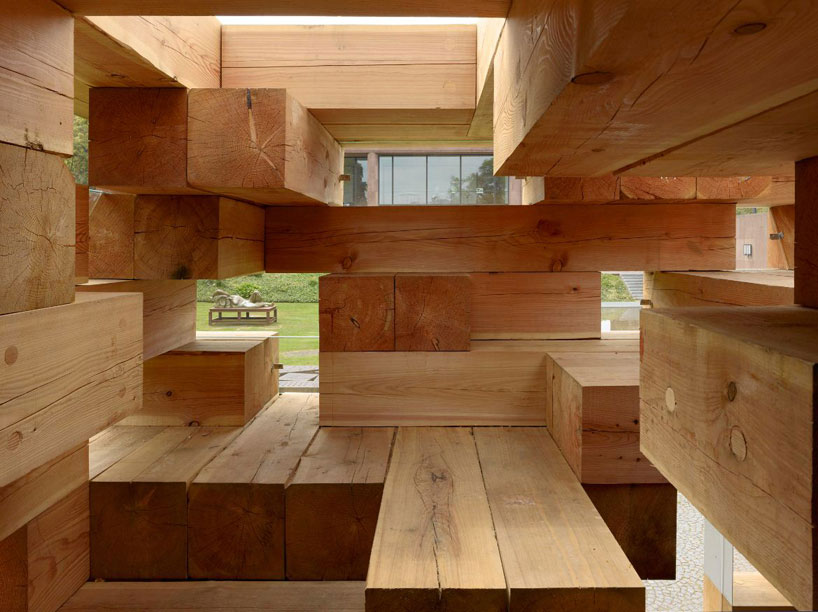 what books do you have on your bedside table?one of my favorite books is written by toro takemitsu. he is a great japanese contemporary music composer and at the same time he’s a very good writer. his words about music, about the japanese culture, about the world inspire me.

do you read design / architecture magazines? I don’t read them in detail, I just take a look.mostly japanese but also international magazines.recently my studio subscribed to domus, architectural review and architectural record. 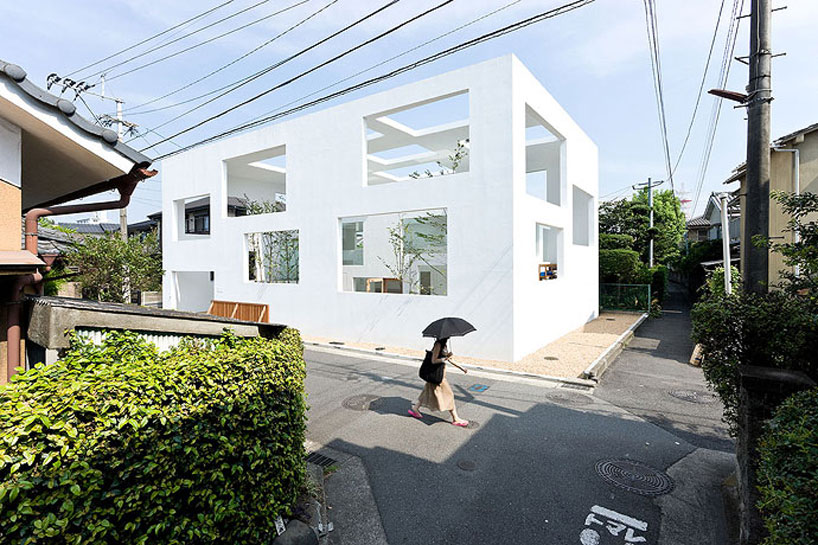 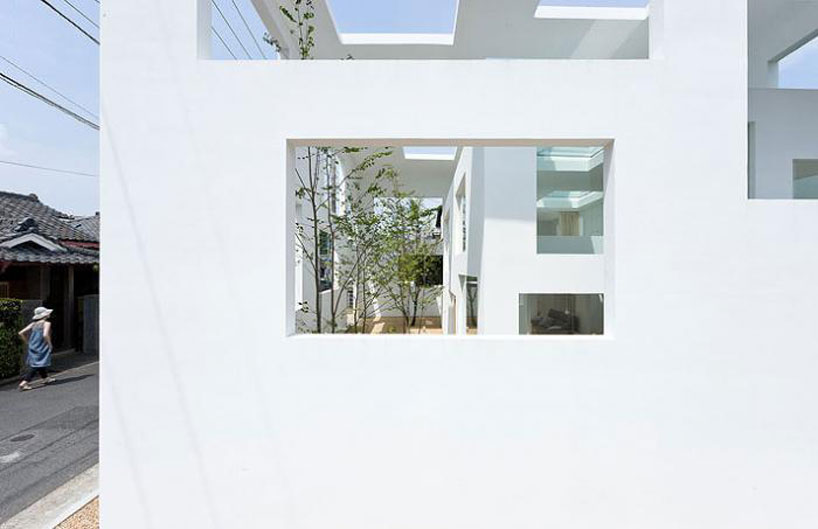 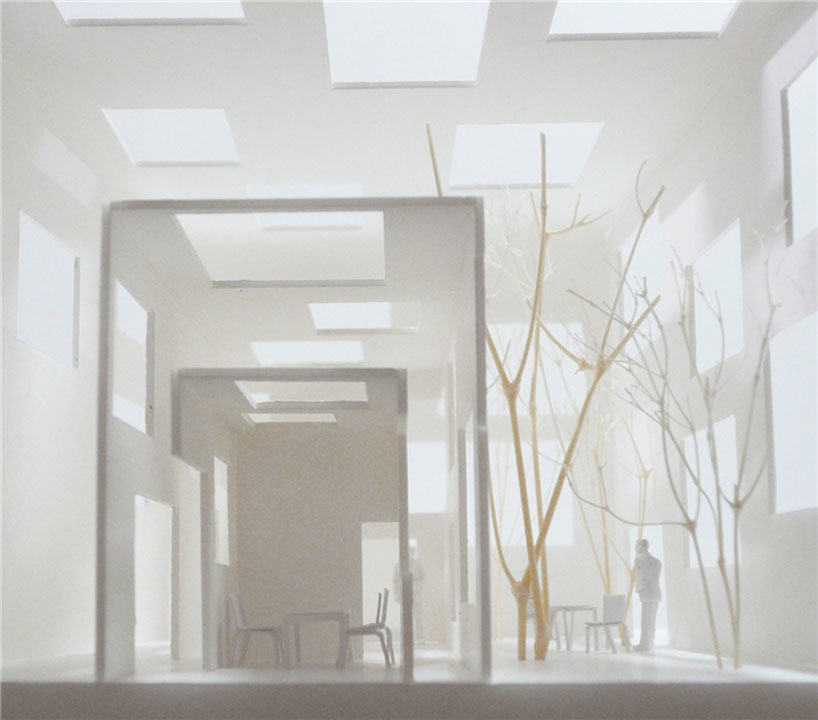 house N, oita, japan, 2008it is a house and simultaneously a garden.image courtesy sou fujimoto architects

where do you get news from?the internet.

I assume you notice how women dress.do you have any preferences?I like clothes by issey miyake. that’s not limited to women, I like his thinking of how to create clothing.a while ago there was a magazine I looked at that had images of women in africa wearing issey miyake’s dresses. it was an amazing photo report. I was very surprised about how the dresses, colors and their living style blend so well together.

what kind of clothes do you avoid wearing?complicated suits.I see clothing as a kind of second nature.

sou fujimoto’s contribution to the sumika projects (tokyo gas co., ltd), 2008 – under construction. residential units in tokyo that will use gas as their main source of energy.image courtesy sou fujimoto architectssee more images

do you have any pets?not for now. 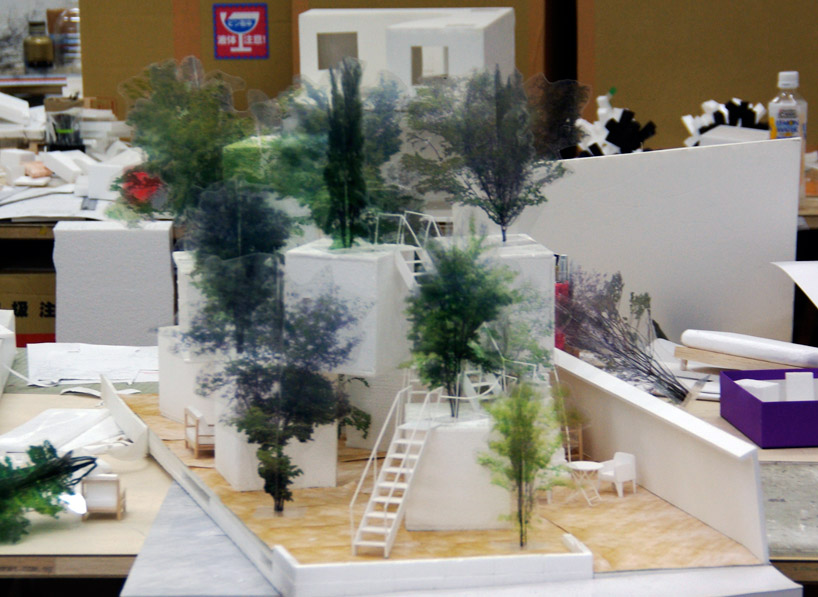 when you were a child, did you want to become a architect?I grew up in hokkaido, in the northern part of japan,surrounded by nature and I enjoyed just playing in the forest. I didn’t think about any future of mine.my hero was albert einstein, so originally I wanted to be a physicist like him, I was interested in the physical aspects of our world. now I find many similarities in the research and practice in both fields, architecture and physics. my first experience with architecture was with antonio gaudi(through reading a book about him).

where do you work on your designs and projects? mainly in the office because my work is not only done by me. I collaborate with my staff through discussions and models,but when I want to focus on something I prefer to be alone.in that case I work at home or in a starbucks cafe. 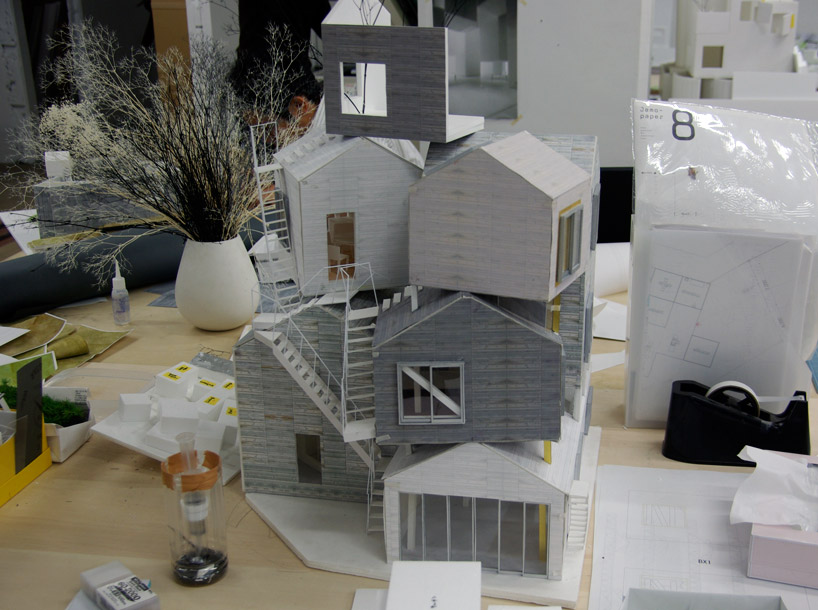 tokyo apartments, 2006 – to be completed in 2009paper modelimage © designboom the collective housing project consists of five dwelling units, each has two or three independent rooms with ‘house’ shapes on 3 floors, connected by outdoor stairs. 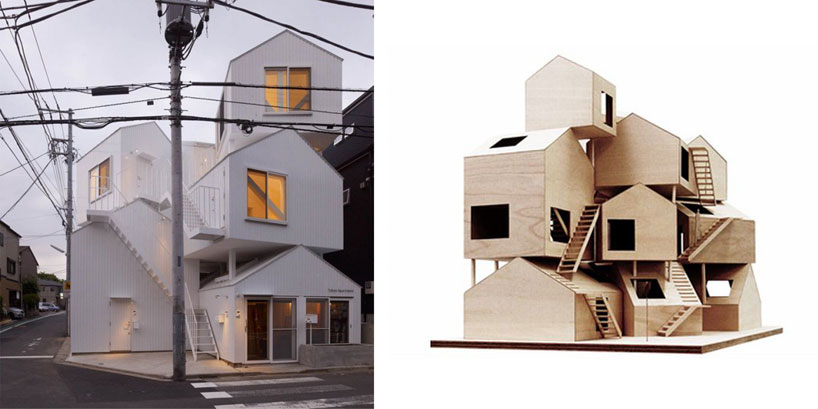 do you discuss your work with other architects?sometimes. for example with toyo ito and kazuyo sejima, …but we don’t discuss, we chat.

describe your style, like a good friend of yours would describe it. I call it ‘primitive future’. a sort of primitive situation that relates to the human ‘cave’ habitation but at the same time I like to create something new for the future.I recently gave a lecture ‘cave or nest’, the two embryonic states of architecture.a ‘nest’ is a place for people that is very well prepared, everything is assembled and very functional, meanwhile the ‘cave’ is just a raw space, which people need to explore and find their own comfort within. this is a situation where people can use space creatively. I prefer something like the cave-like-unintentional space. something that is in between nature and artifact – formless form.

formless form?space is relationships and architecture generates various senses of distances.I’m very optimistic and see architecture as something between living together and independently. there are many degrees of interaction amongst people.to construct a wall is to bisect a space into 0 and 1, however a space must have intrinsically many graduations between 0 and 1. I like to create an in-between-space, therefore my works are very basic (I’ve designed architecture that is very simple but looks complex due to its geometric form). 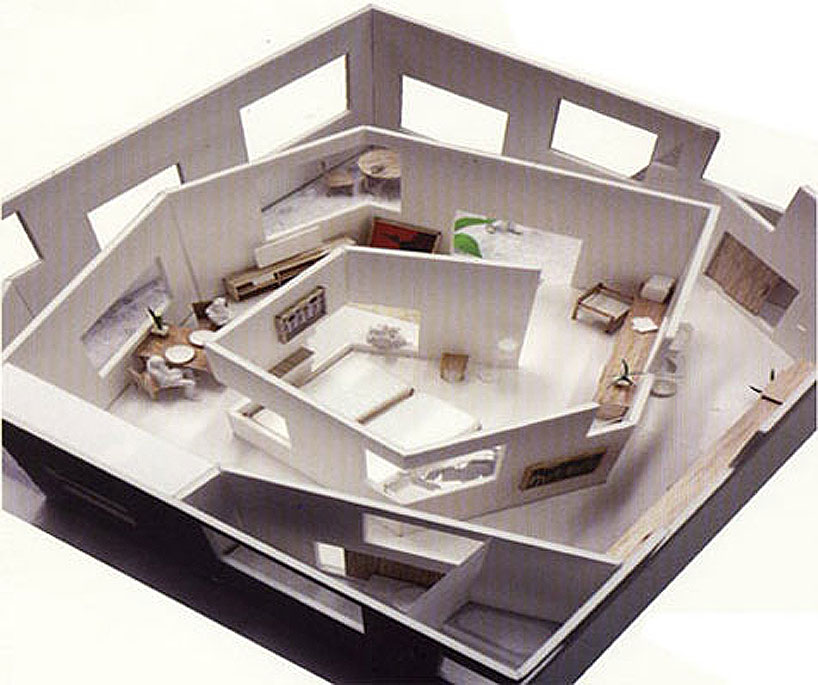 please describe an evolution in your work, from your first projects to the present day.the projects are becoming bigger because I get the chance to do more prestigious work, but I don’t want to limit myself just to expensive things. sometimes with private projects that are low-budget I have more possibilities.

what project has given you the most satisfaction?there are two low-budget projects that I have just recently finished.one is named house N which is a very simple box house. an outdoor space that feels like the indoors and an indoor space that feels like the outdoors. I think we were successful in creating a space between the house and city. my ideal is architecture too be roofless and garden-like.the other project is called ‘final wooden house’. we stacked wooden blocks together to create a very small house, in which there are no categorization of floors, walls, and ceilings.because floor levels are relative people reinterpret the spatiality according to where they are. it was a big challenge for us, as we needed to consider if there was enough space for people (laughs). 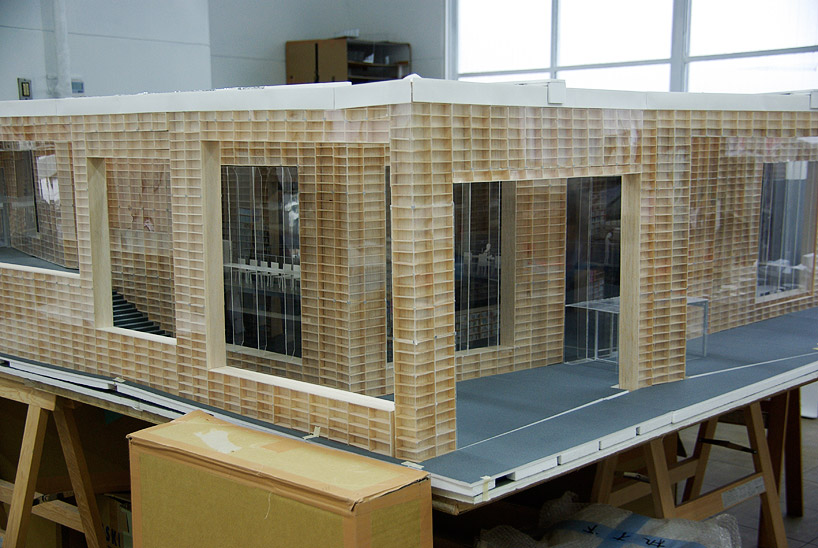 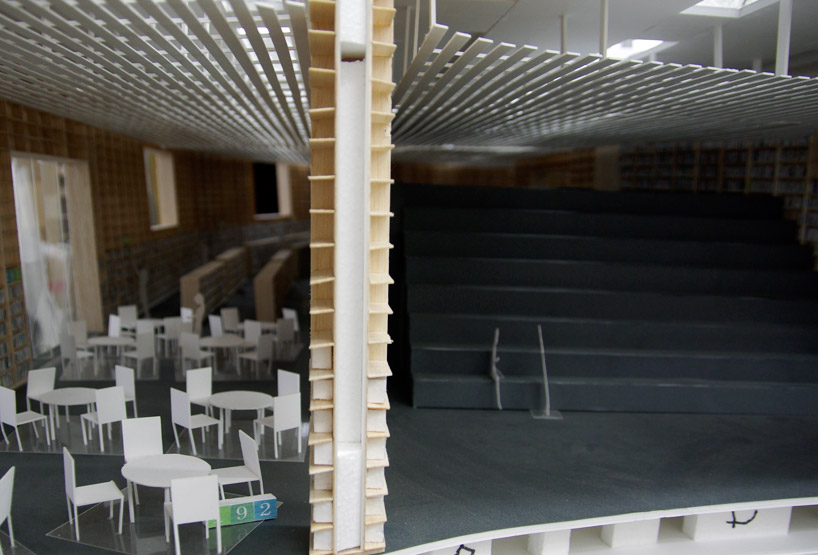 a view inside the wood modelimage © designboom

did you modify your buildings a lot during development, because the client wanted something different?I like to answer to the clients request as much as possible, but I do not see it as compromises. I react with a more creative development. of course clients always have an idea of what they want and some site specific concerns but at the same time they like to have something unexpected or something beyond their imagination. many clients want a new lifestyle through a new style of house. I propose something beyond their request and if they like the idea, the project will start. if they don’t like the project at all it will stop.fortunately our idea, our scheme is a flexible one.the basic scheme is very strong but it can adapt while still remaining strong.

who would you like to design something for?an art museum or some kind of museum would be very interesting for me, or an art gallery and a photo studio. I like to design medical facilities. in 2006 I have worked for a mental hospital,developing the children’s center for psychic rehabilitation.right now we are designing a library. 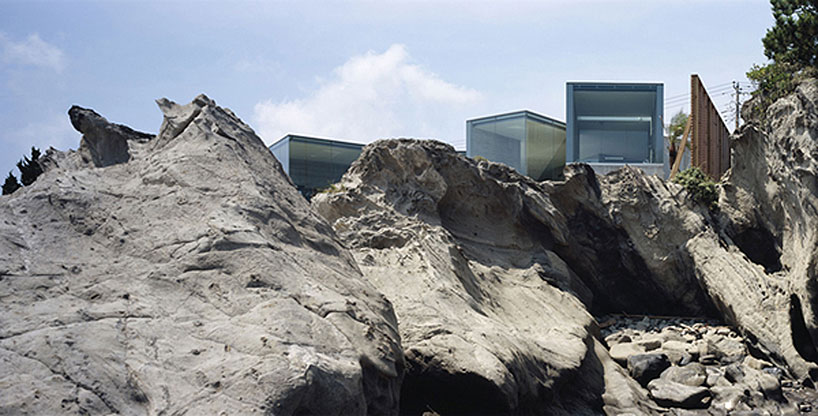 is there any architect from the past, you appreciate a lot?louis kahn, le corbusier, mies van der rohe…and of course michelangelo. I also like the architecture designed by nobody, for example gothic cathedrals.

and those still working / contemporary architects?I love frank gehry because his architecture is like a second nature,like a jungle. something beyond artificial things, it’s amazing.

what advice would you give to the young?I’m still a young architect. so yeah um…enjoying things is very important. 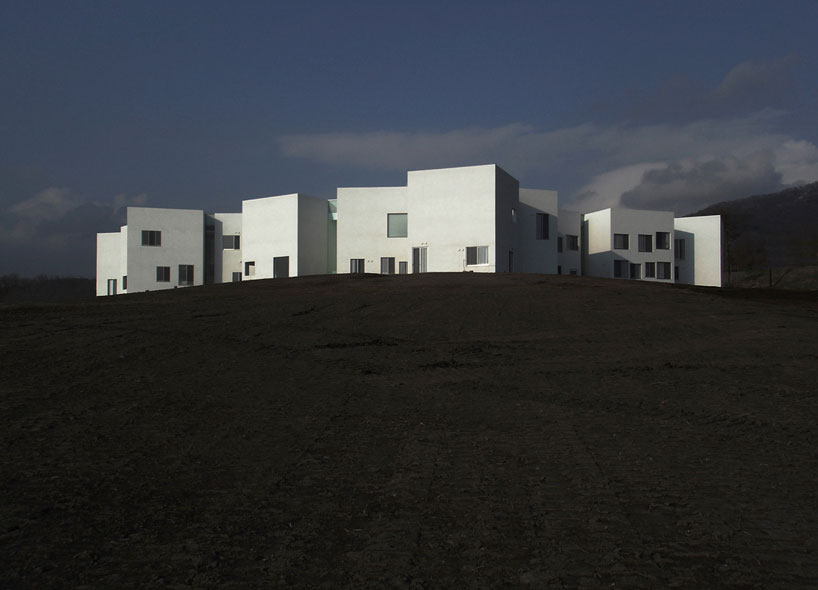 what are you afraid of regarding the future?I think I we have to be very serious about the change in climate and the situation of nature. I think that it is a great opportunity for us to rethink about the modern age culture of controlling everything. we have to change that kind of whole super controlling situation.for example air conditioning – when we use it we close and shut out nature and we are limited in the space we have. the artificial machine of the air conditioning is controlling our space and separating each other. instead we might be able to live together and use a kind of natural power to create a more comfortable space.humans should adapt a bit more, rather than control.