the stacked rainbow colored slabs contrasted against the white horizontal panels break down the traditional facade structure of a credit union. the ‘sugar shinkin bank’ is the third branch located in shimura, japan is gently illuminated at night as the twelve colors gently fade into the sky. 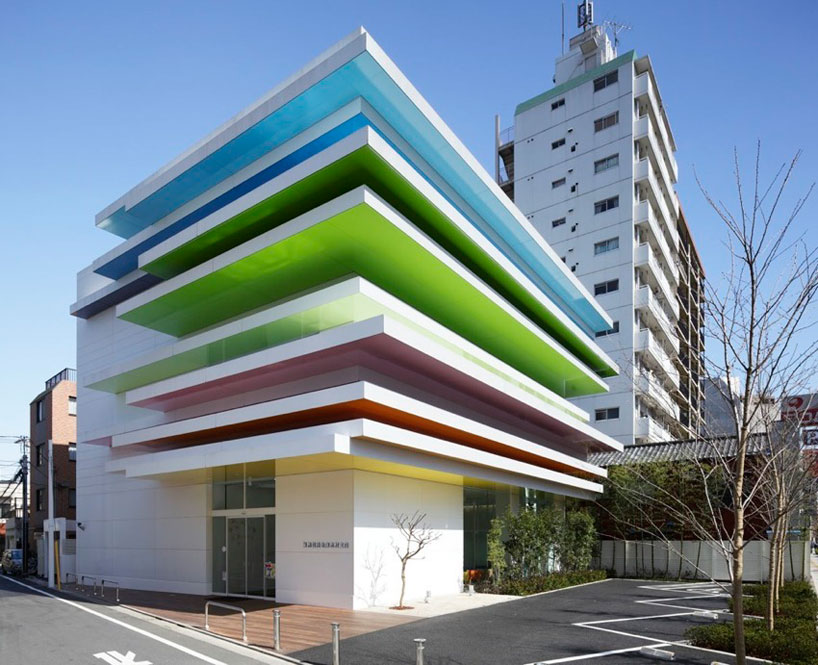 2. ‘new office on roof’ by bold-design

with an enclosed area of 170m2 bold design’s new office is the smallest building in this year’s list. located on a vacant rooftop space in the heart of paris, france the interior is similar to a ship’s cabin, the space is maximized with flexible furnishings and concealed storage. 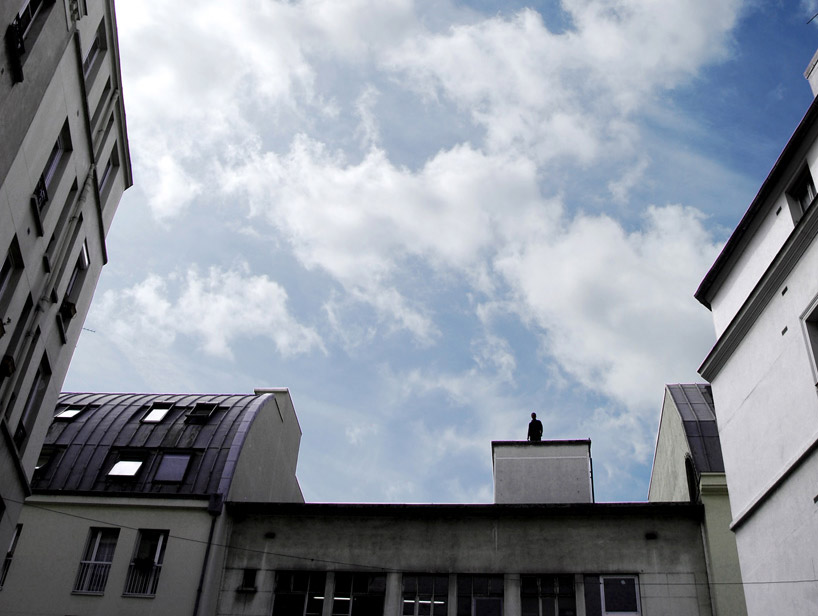 to keep this 190m2 space open and playful, noninvasive design elements were incorporated into this studio for 5 in tokyo, japan. behind the mirrored wall contains the washroom and storage which visually lengthens the space. with a built-in tube slide for employees the office intentionally lacks partitions and dividers maintaining an open concept atmosphere. 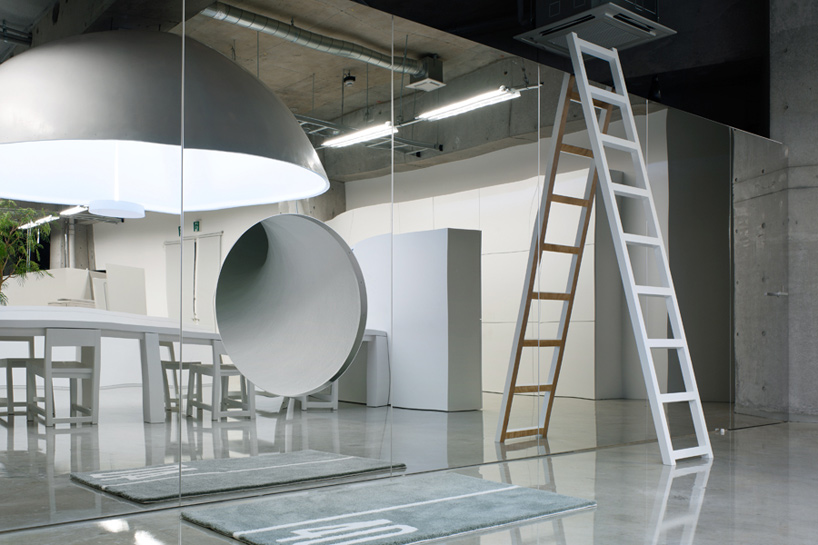 this tetris-like structure features volumes that seem to float and cantilever over one another providing 350 offices for the employees of ‘the actelion business center’. the roofs generated from the stacking allow for areas to plant greenery where the floor to ceiling triple glazing encourages transparency in all directions. 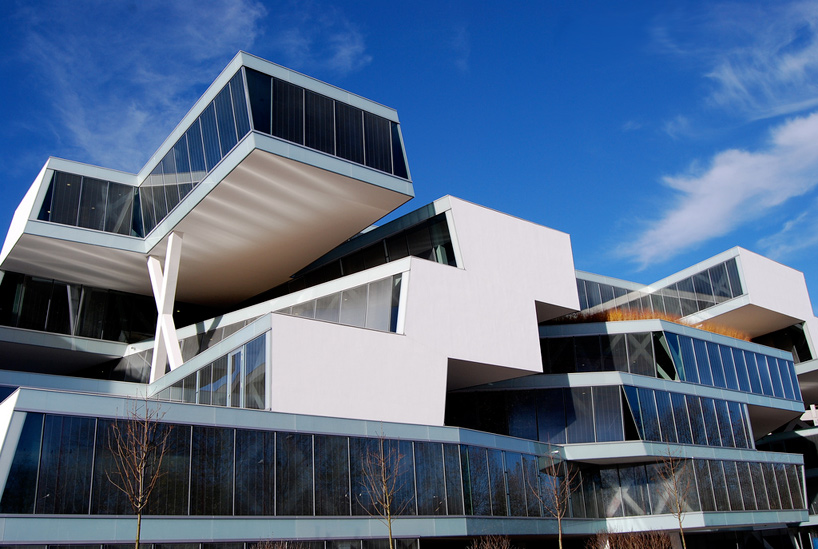 this longitudinal free-standing food photography studio located in são paulo, brazil features large sliding metal doors which open to a spacious outdoor garden. the central studio is defined by its open space and elevated concrete catwalk overheard to emphasis the linear features of the building. 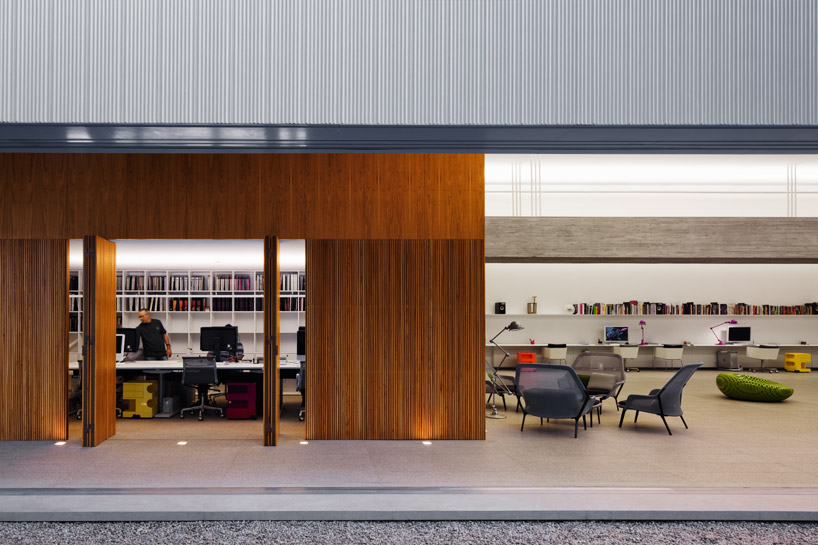 located in the heart of osaka, japan, this 32-storey office complex creates a subtle yet definable marker to the urban landscape. situated on a corner near the city’s main train station the facade draws elements of a pixelated tree with its bark ‘peeling off’. 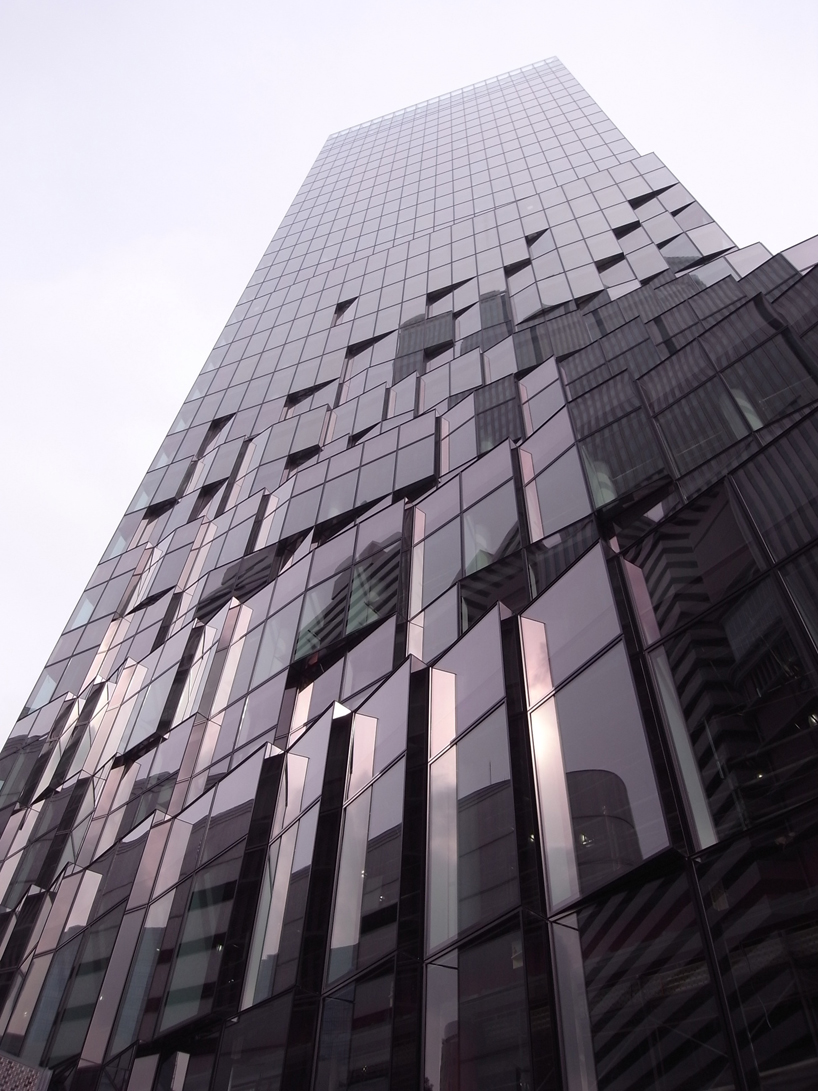 located in shanghai, china, this complex of multiple functions fully integrates its form and framework to the site. an enclosed walkway serves as the main circulation spine of the headquarters which connects the elevated office spaces, private offices, executive suites, library, auditorium, exhibition space and cafe to one another. 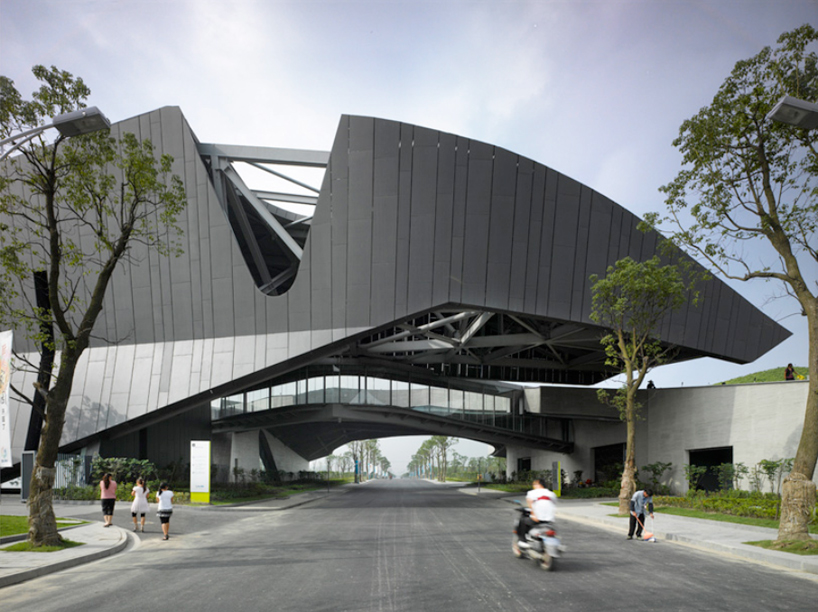 located adjacent to the historical gyeoungbuk palace in seoul, korea, this 17-storey office building seeks to reference and respects the pre-existing nature of the site by maintaining the flow of circulation at both street and basement level. influenced by the shape of an old korean birch tree trunk, it allows the structure to utilize the irregular conditions of the site. 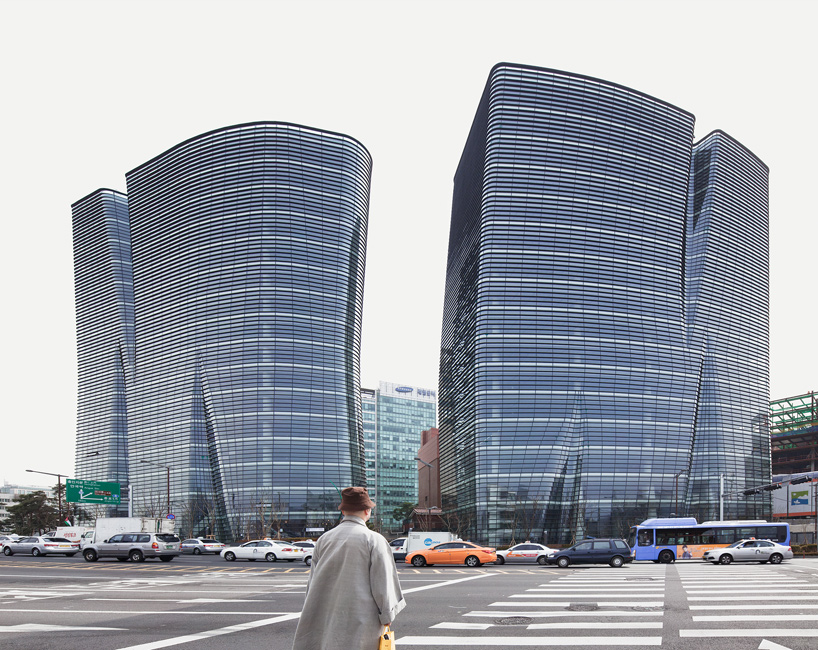 the triangular form and sharp pointed edge create both a uniform and multifaceted facade for the headquarters for the popular scandinavian fashion brand. located in borås, sweden, the exterior surface is printed in a white raster to reflect and illuminate the changing light conditions which is then contrasted by the black side entrances which indicates a transition from the public to interior spaces. 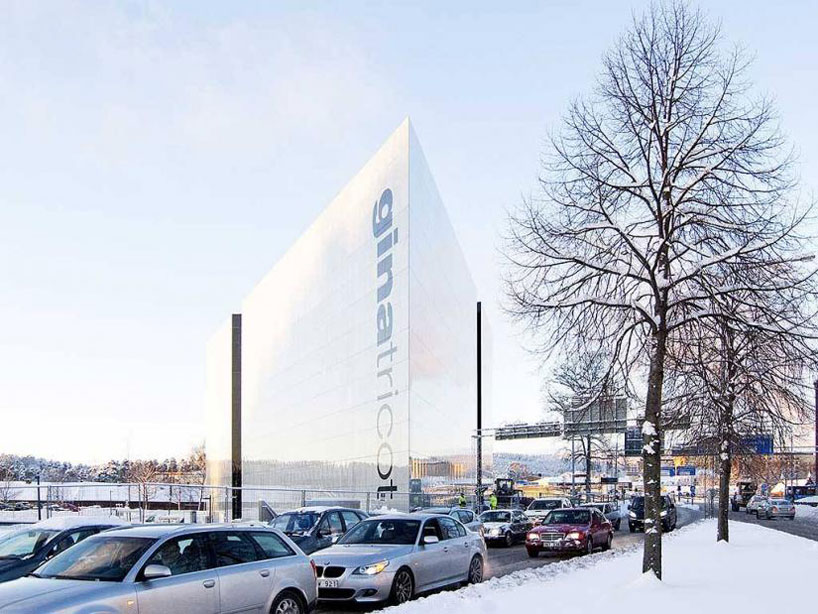 a space for two companies the office space features a horizontal wooden plane that serves as both a ceiling and desk surface. located in a restored industrial hall built in the late 19th century in paris, france, the office is fully open to a steel framework roof fitted with self-cleaning glass. mimicking the atmosphere of a green house rather than a corporate agency it approaches the traditional work space in a new way, introducing a different type of landscape to the office environment. 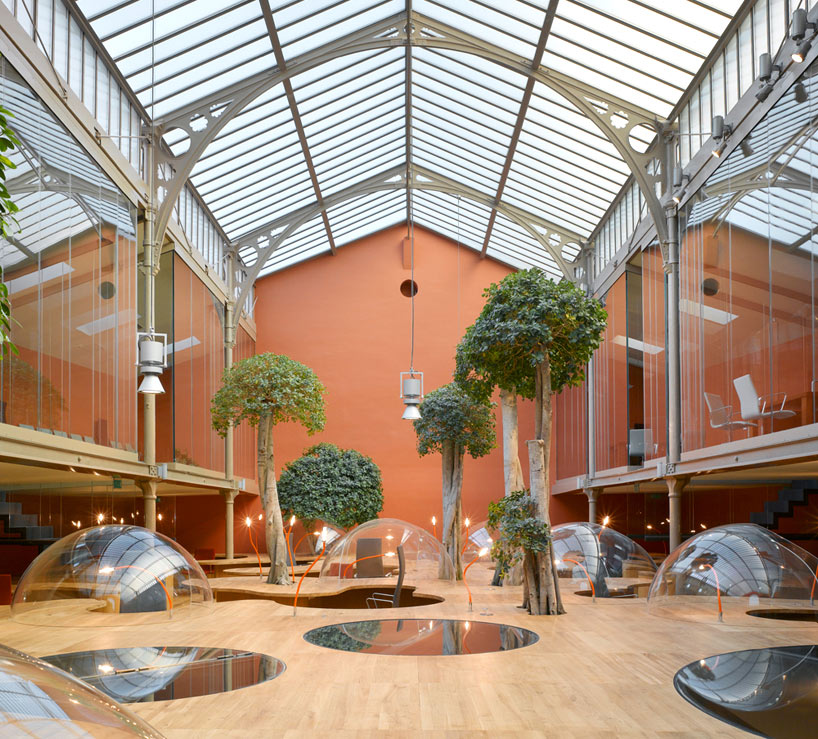