as part of DFA’s proposal for the future of the city of new york, the studio founded by british-born architect laith sayigh has re-envisioned pier 40 as a resilient mixed-use complex of housing, recreation, and commerce which maintains the existing popular soccer field. having done the analysis of the site’s current condition, DFA designed a solution to the floating structure’s future development. 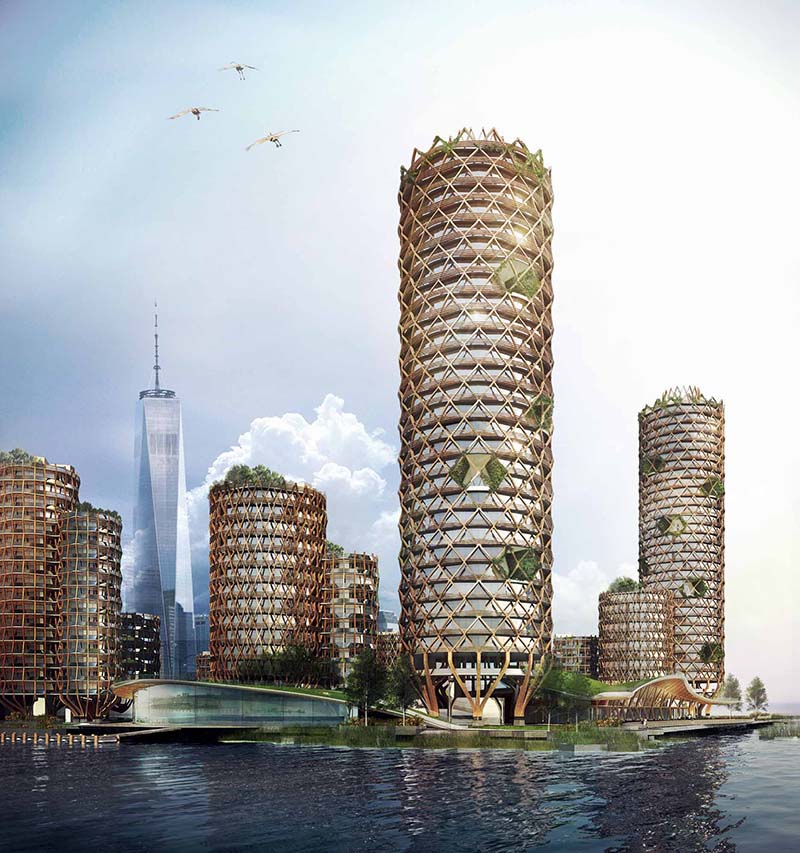 pier 40 is the largest pier structure on the hudson river with a 15-acre footprint and generating approximately 30% of the hudson river park trust’s annual operating budget. despite its vital importance as a parking garage, athletic complex and offices, the pier is deteriorating and need of critical infrastructure repairs which will cost in the hundreds of millions of dollars. a valuable and viable real estate asset, pier 40 should be reimagined as a response to its structural and natural strengths and weaknesses. DFA’s site-specific solution introduces mixed-housing, mixed-recreation, and mixed-commerce designed to flood with the rising current and 21st-century reality of the over-water structure. 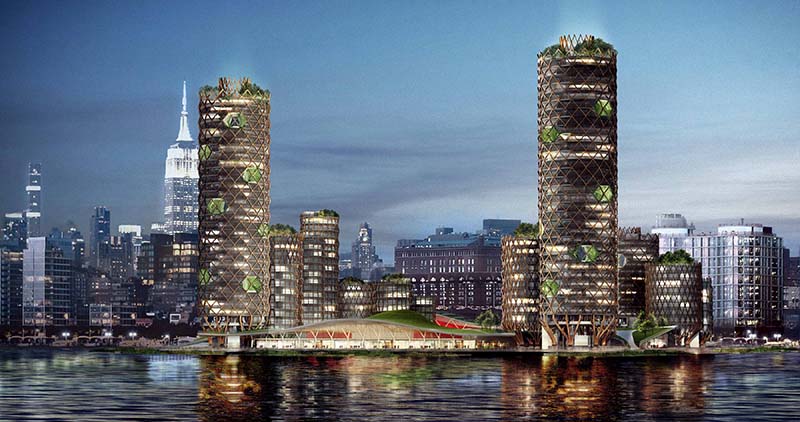 following an analysis of the zoning and state of existing piles, DFA identified areas of pier 40 that are fit for supporting clusters of program influenced by the pier’s predominant recreational use and addressing a city-wide need for affordable housing. combining the analysis with design, DFA utilized an algorithm to determine the optimal location for each tower type, determining that each tower must have at least three structurally sound connection points to support the weight/load. the pier’s existing structure is optimized for performance as the foundation for a new community. 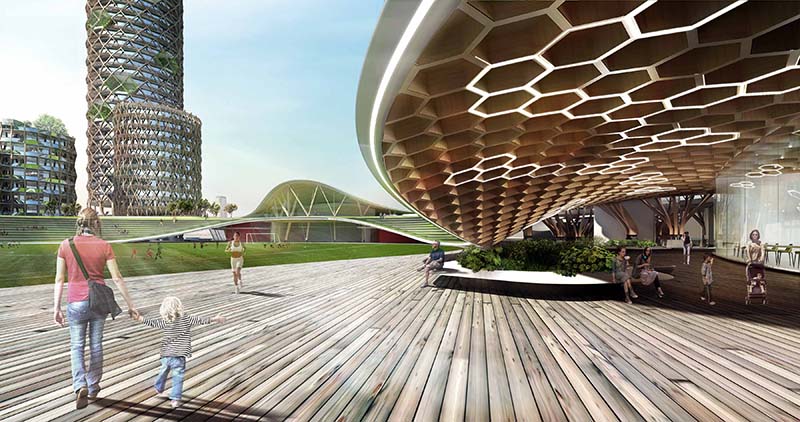 the existing pier deck remains operational until the year 2050

new york city’s sea level is expected to rise 11-30 inches by 2050 and between 50 to 75 inches by 2100, with the majority of current buildings not designed to accommodate such inevitable changes. DFA’s vision for pier 40 takes a longer-term view with comprehensive design approach for the future. the undulating landscape deck around the towers is lifted to accommodate non-housing programs including retail, theater, sports complex, and boathouse, which remain active until 2050. floating landscape pods — additional space for human interaction, oyster beds, and diverse plantings — will surround the pier to absorb wave energy during major storm surges. 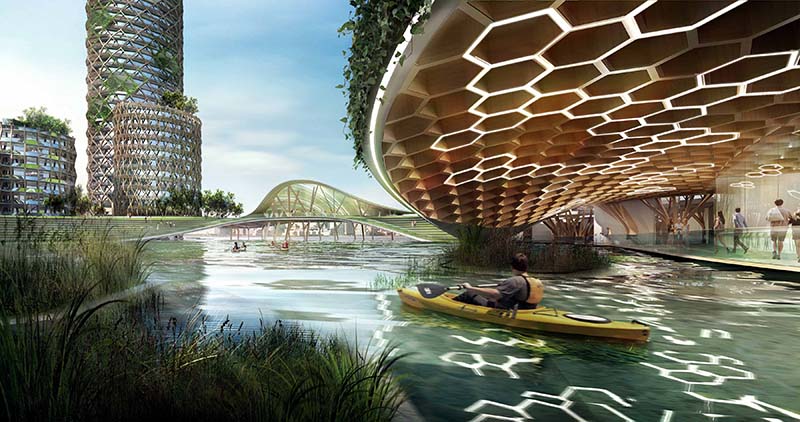 by 2100, the existing pier deck is submerged and the new landscape deck and pathways provide access to the mixed-housing towers

beyond 2050, as regular flooding begins to engulf the coastline as we know it, the landscape deck transforms into a floating island with new pathways built to connect the evolved wetland ecosystem to manhattan. each of the four-tower typologies providing luxury, affordable and market-rate housing on the northern and southern edges of the pier is comprehensively designed for the year 2100 sea level projections. until 2050, the towers will offer pier-level lobbies and elevators. 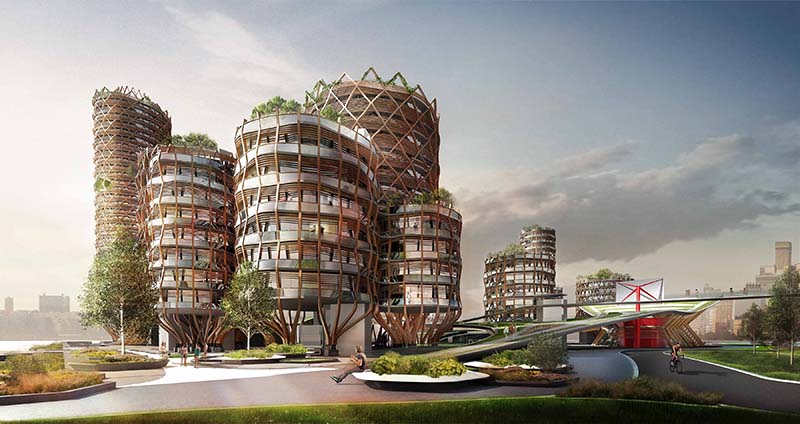 in total, nineteen residential towers organized into eleven clusters and offering five types of living across 450 units will provide new yorkers with diverse housing options. ranging in height from 96- to 455-feet, dfa utilizes six-glulam core and superstructure members to minimize their contact with the original pier deck and elevate the units sixty inches above the predicted storm surge levels. between the core and superstructure are radial glulam supports, CFT bracing panels and steel joining plates, with glazing enclosing the apartments ranging from studios to three bedrooms. above the pier-deck lobby is a 360-degree observation deck that looks onto the undulating landscape deck. after 2050, it becomes the building’s entry point via new pathways. all units offer views to the river and city. 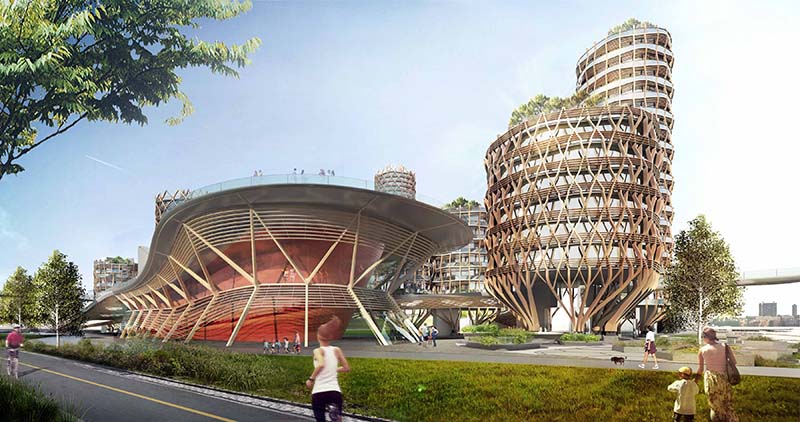 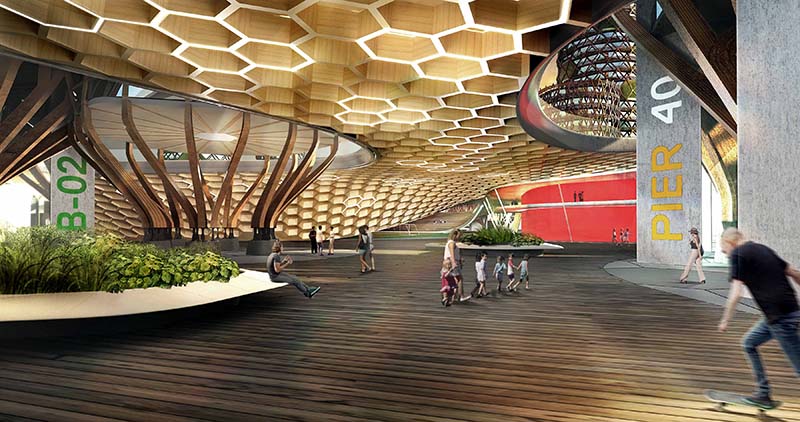 below the landscape deck is a vibrant, activated public realm with recreational and commercial program 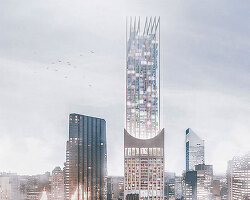 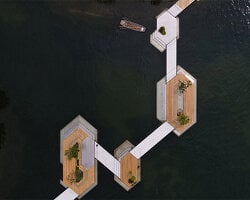 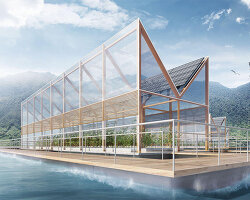