designboom visited the paris studio of DPA architecture, where an approximate 60-strong team of individuals feed the different creative processes of the french firm. founded by dominique perrault in 1981 in paris. the architect’s extensive portfolio of seminal and contemporary projects range in all sizes, programs and is disseminated with unexpected materials and surfaces. from the recent completion of the dufour pavilion at palace of versailles, the EPFL mechanics hall in switzerland to the famous french national library in paris back in 1989; he has gained international recognition for his innovated approach to architecture where he was awarded japan’s praemium imperiale laureate last year.

during a recent visit, the architect spoke about his approach to working with heritage buildings, the role of the architect and changes in french architecture. 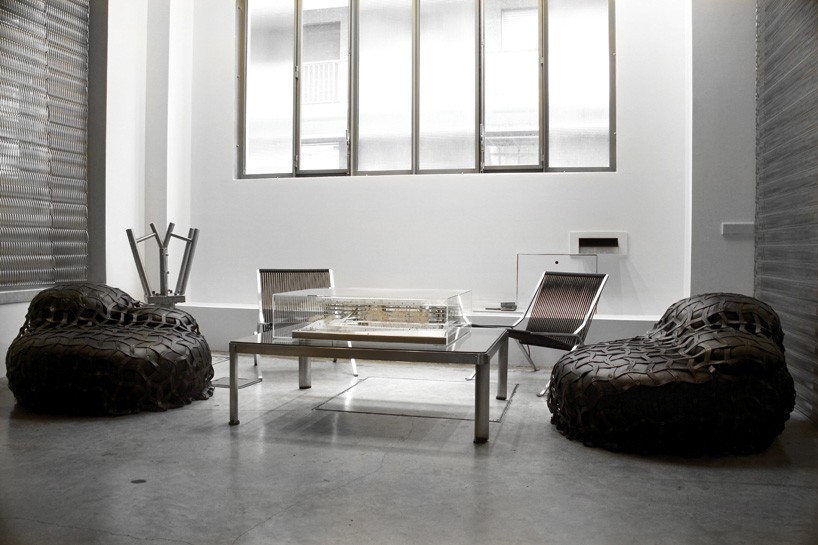 designboom: what is the role of the architect concern the changing the quality of the city?

dominique perrault: for me, the topic of architecture is to change the relationship between the environment and the people. the environment is not only about sustainability and landscape, but everything around the building; the district; the exchange between the users and the building itself. we have a lot of heritage here, especially in paris, this legacy comes from the second part of the twentieth century. we’ve built more in the twentieth century in comparison to lets say, two thousand years before. architecture has a new status about the metropolitan people and the possibilities of how we move around and work. 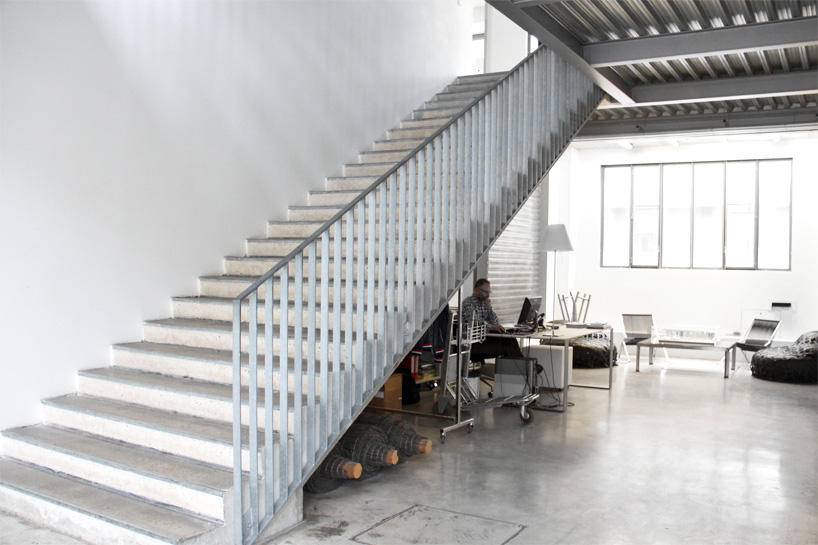 DB: what changes have you seen in the architecture in france in the recent years?

DP: a lot has changed with the common projects, we’ve lost the ‘grands travaux’, and I think projects have become smaller. there has been a reduction on the ambitions of the city and the society. for me this is not a good balance. the good balance is we should refurbish buildings, it may not be an exceptional building but this building exists. at the same time we should develop projects that would improve the quality of the city. 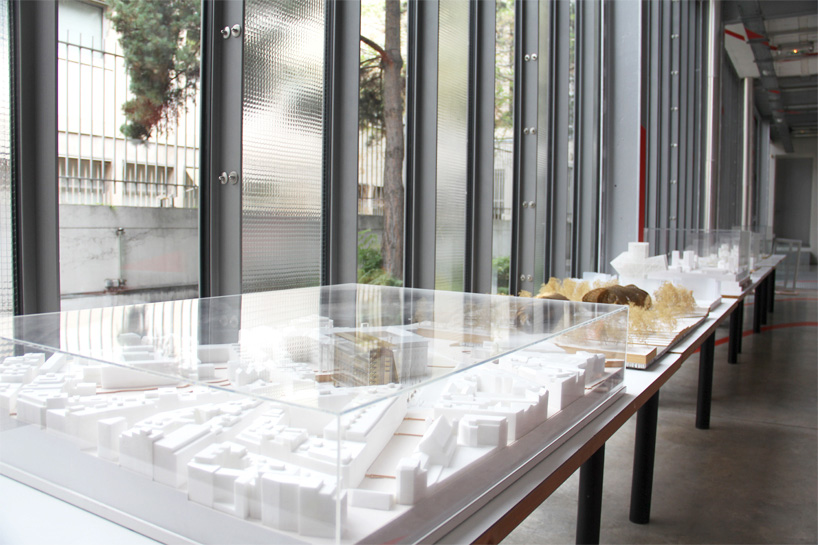 DB: last year you won the japanese praemium laureate, how does it feel to be recognized on the other side of the world where the architecture is a lot different?

DP: my work is actually more recognized in asia than in france. it’s the opposite effect. with the praemium laureate the reaction in france was dominique perrault is an architect?! 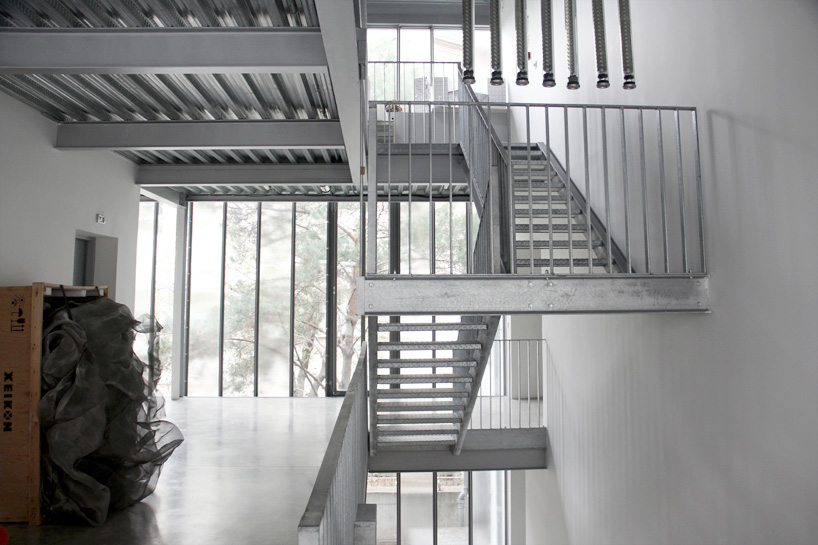 DB: do you think you have a signature and recognizable style to your work?

DP: style is not the route of architecture, the style is the design and the design is not enough to create contemporary architecture. we should develop new roles physically for the building; a strategy of creating the real location for the building and connecting it with another infrastructure. we spend a lot money underground and this kind of network doesn’t work. the arc de triomphe project is a manifesto to explain we have fantastic heritage and we should propose a new vision for this monument with underground developments. not underground in the dark, but to use this area in the epidermis as a new active service and in this case, we would not change the skyline of the city. we don’t change the vision of the landscape but instead, we introduce a new relationship between the underground network and the existing buildings. 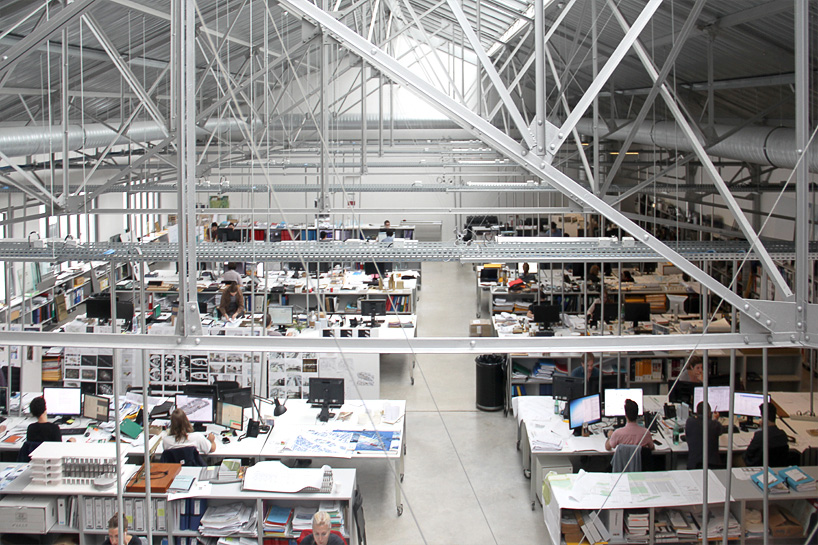 DB: anything outside of architecture which feeds into your work?

DP: life, the life and the life. 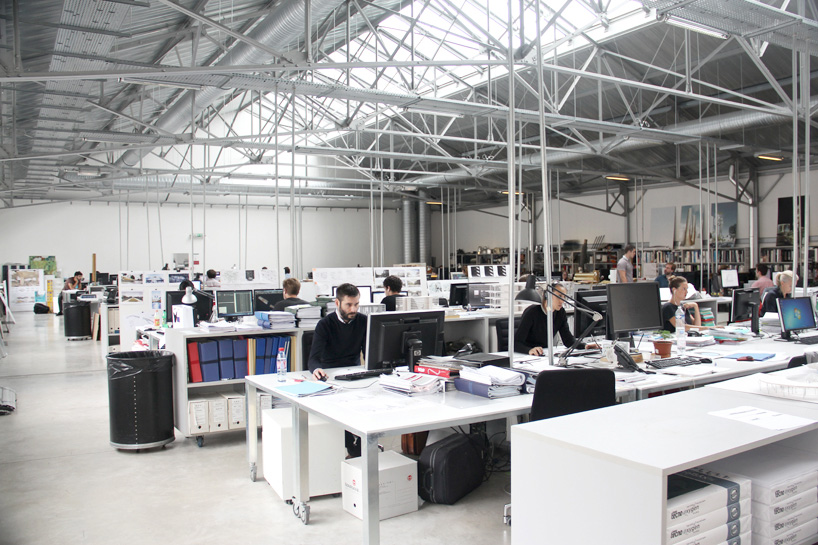 DB: what is your studio working on now?

DP: we have projects in france such as the main building of the post office that was constructed at the end of the 19th century and we are refurbishing it. we are also entering into competitions in china. 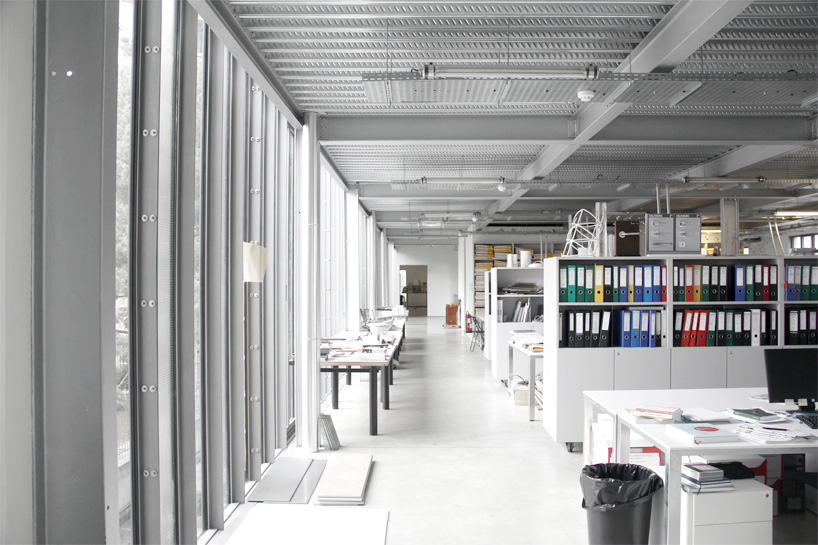 DB: do you think refurbishing building is more challenging then building from new?

DP: it’s one of the important parts of ta project because it is the reality of this period. old buildings built hundreds of years ago may not have been part of the center but cities have expanded. for the architect, it’s a challenge to decide how it is possible to keep, to manage, manipulate, and change this kind of existing building. we have a lot of projects that constantly deal with these questions in the west and center of paris. especially in france, we have have many fantastic and historical buildings and for the architect, this is a very important and popular market. 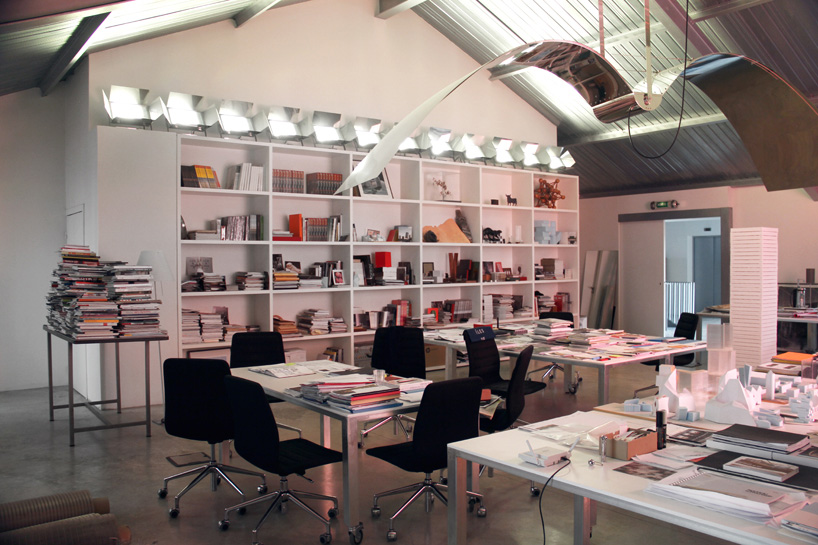 DB: on the opening of the studio’s groundscapes exhibition..

DP: ‘groundscapes’ started thee years ago and this exhibition completely finished one year ago. I think it is important for the architect to open their studio and workshop to the public. this kind of exchange is very positive because for business partners, clients, landscapers, the people working with us, as it is very exciting for them to see a different side the project. 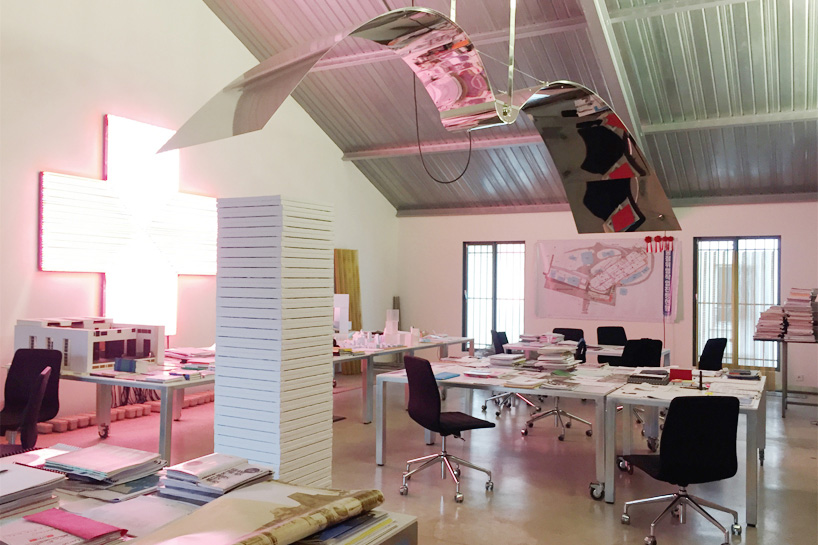 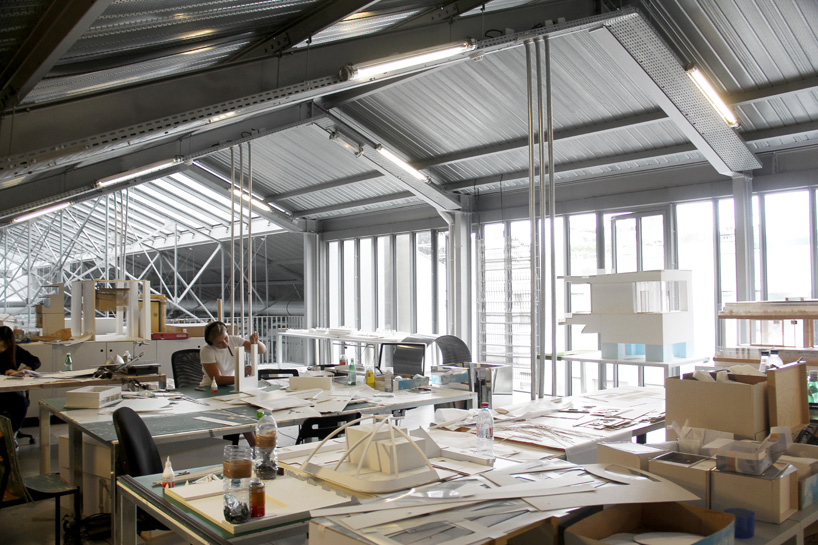 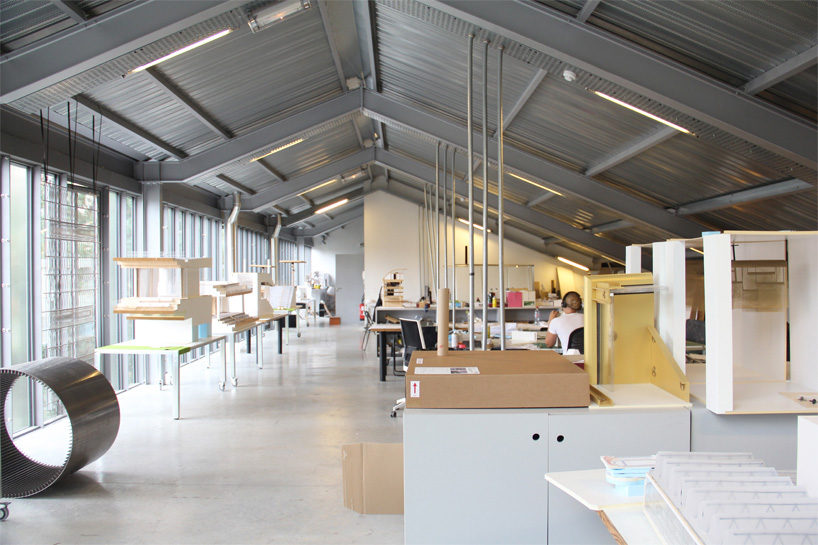 bright and airy, the industrial space is wrapped with panels of frosted and normal glass
image © designboom 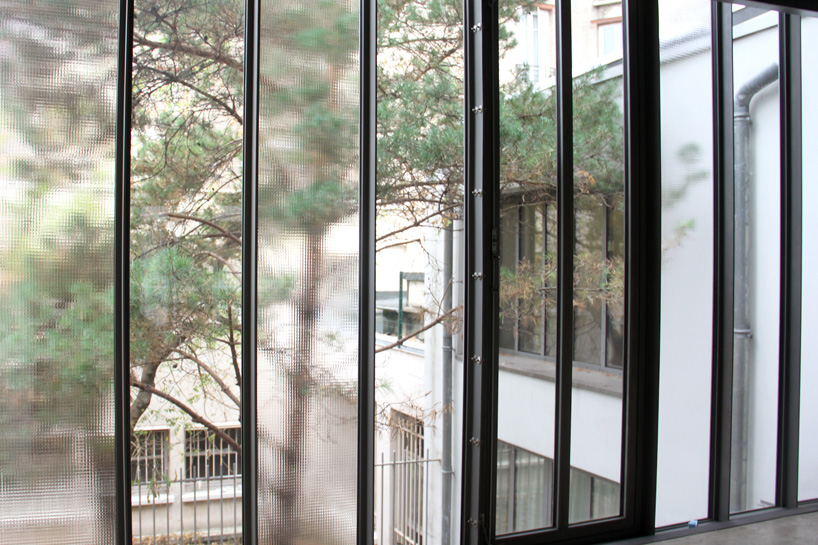 the office looks onto an internal courtyard
image © designboom 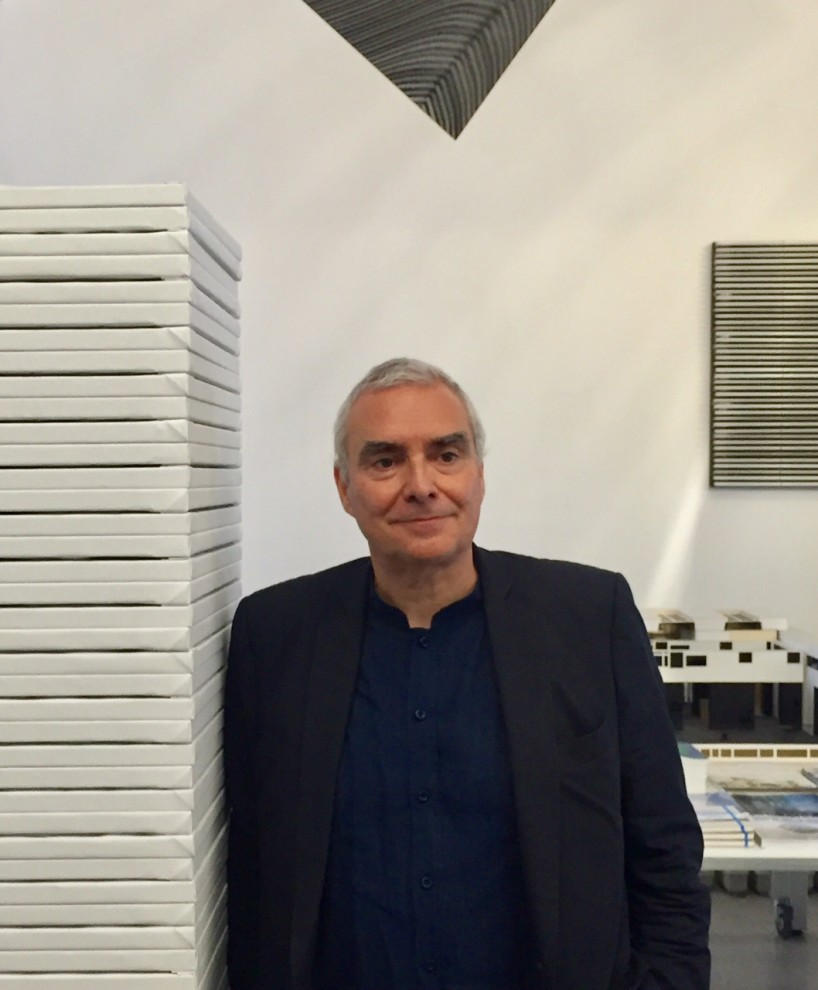 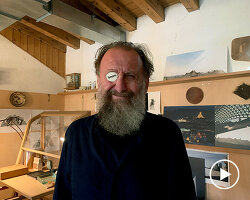