dutch elastik architecture together with mat studio undertook a study on a large scale conversion of a car infrastructure into a pedestrian one in prague as part of ‘converging territories’ a pilot project organised by EFAP (european forum for architectural policies) and CCEA (centre for central european architecture). the project seeks to bring external analysis to specific urban challenges of european cities while at the same time enhancing the mobility of architects in europe.

the exhibition converging territories is currently being exhibited at the venice architecture biennale. 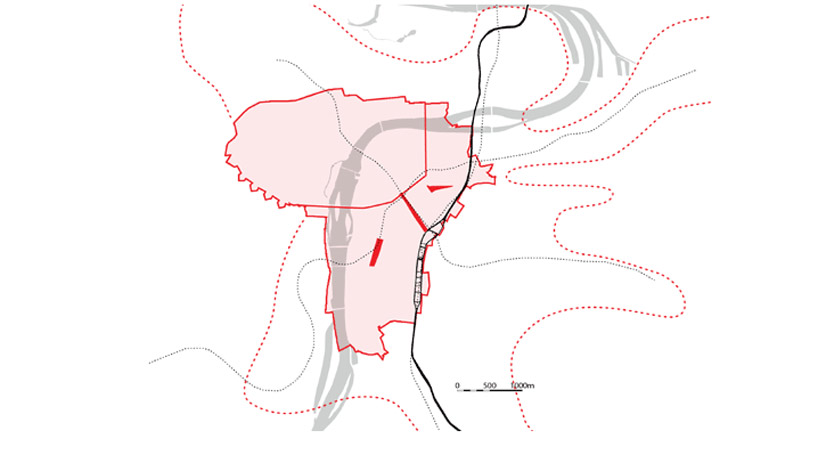 the six-lane magistrala highway which cuts through the city

prague’s historical city core changes from a residential area into a tourist attraction, because the six-lane magistrala highway physically divides the city into socially, environmentally, and culturally segregated parts.

diagrams of noise and air pollution

the team’s analysis morphs the already planned conversion of the magistrala into a boulevard. their proposal adds retail, commercial, and cultural programs to a softened infra-border blending the interests of residents and visitors. this opening of the boundary leads to a repopulated centre and a reconnected city.

the magistrala’s 3,6 km stretch will compete with the charles bridge with its 30 sculptures to become a favorite destination. the highway will be converted into continuous green art-landscape. curated segments of the magistrala could host a city terrace, info center, recreation field, cycling route, outdoor gallery and much more. tourists will be pulled out of the historical centre to mix with the real citizens of prague.

various programs along the route

the multi-level, mix-use reprogramming of the magistrala includes a transformation of the old station masaryk which sheds its current services to an expanded nearby central station. the national museum and state opera reconnect with wenceslas square. the spectacular nusle bridge will accommodate suspended housing and hotel facilities. prague turns a boundary into a bridge by reconnecting city zones that have been divided for too long.

Jan 14, 2021
junya ishigami completes plaza of kanagawa institute of technology in japan
remaining open to the elements, the project has been conceived as an expansive landscape that changes with the seasons and the weather.
architecture
337 shares
connections: +1490