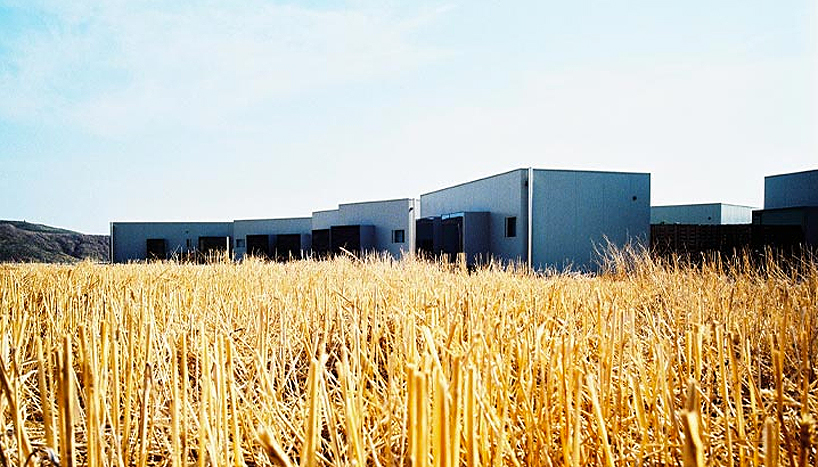 located directly in the wheat fields in the southernmost tip of navarre surrounded by the desert landscape of the bardenas where the main source of
europe’s wind energy is harvested, the ‘air of bardenas hotel‘ sits discretely not distracting from the natural beauty of the site. the owner, who hadn’t
any previous experience in the business of hospitality wanted a one-storey structure that would be built under a constrained budget and time limit,
and would include as much steel as possible since they counted on the collaboration of a highly-skilled metal worker. as a result, spanish practice
emiliano lopez monica rivera arquitectos used metal frame sections infilled with a foam core, like a standard structural insulated panel (SIP) that
were built off-site at the shop while the foundations and site work were taking place. the project – an entry building with a reception area, main hall,
meeting rooms, bar and restaurant, and 10 satellite structures containing the individual rooms – was finished in 12 months. 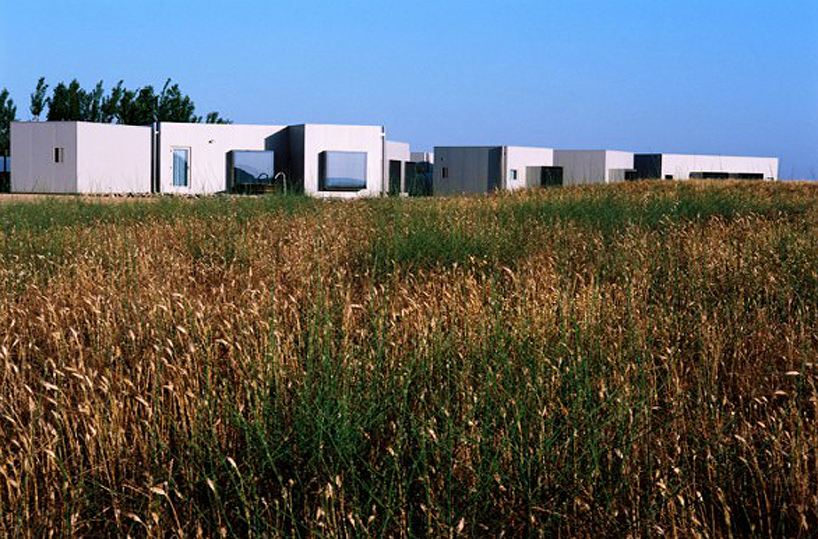 as the area, normally appreciated for its high winds, is also in a particular region of spain that suffers extreme summer and winter temperatures,
the site can many times find itself in an inhospitable environment. the architects therefore designed the complex as a series of smaller separated
buildings conceived of as quiet protected devices used to observe the beautiful exterior scenery. this arrangement also keeps a low profile amongst
the tall wheat plants, and makes the whole facility easier to protect from the wind with the portable windscreens made from stacked recycled wooden
palettes recovered from the nearby farms. it also creates a series of interesting interstitial spaces, such as the southern courtyard that uses the constructs
themselves to block the turbulent air. rocks also play a major role in the project, as they are used to delineate the property line from the adjacent crop
fields and were also ground into the concrete aggregate to cast the same color as the native soil. 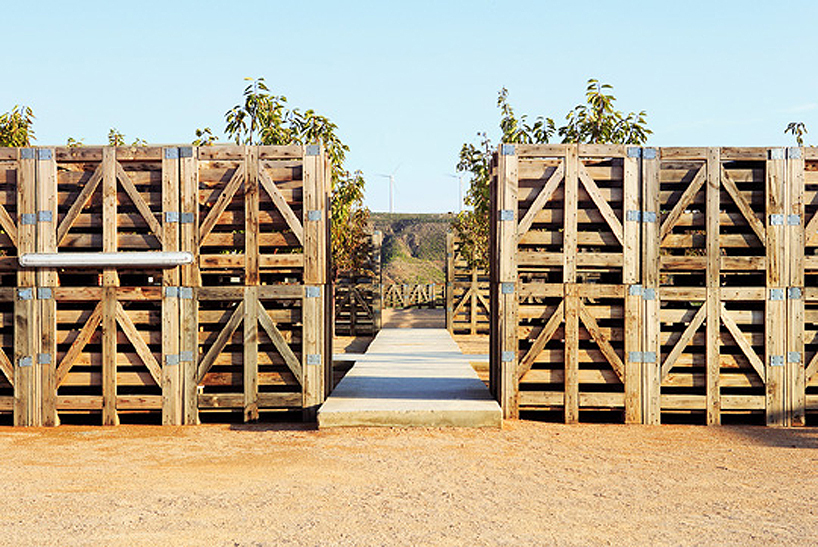 each of the rooms is accessible only from the outside, so each one is truly lone-standing and private, and contain an exterior bathtub, patio and fruit tree.
a large window marks the northeastern facade of every unit, as a lens through which to view the world and a reflective surface to portray it from the exterior.
it protrudes from the wall enough that it may be inhabited from the inside as a ledge to sit on or place items. the orientation of each room allows the
guest to view the sunlit environment while turning its back to the direct sunlight and therefore avoiding unnecessary solar gain from the south and west. 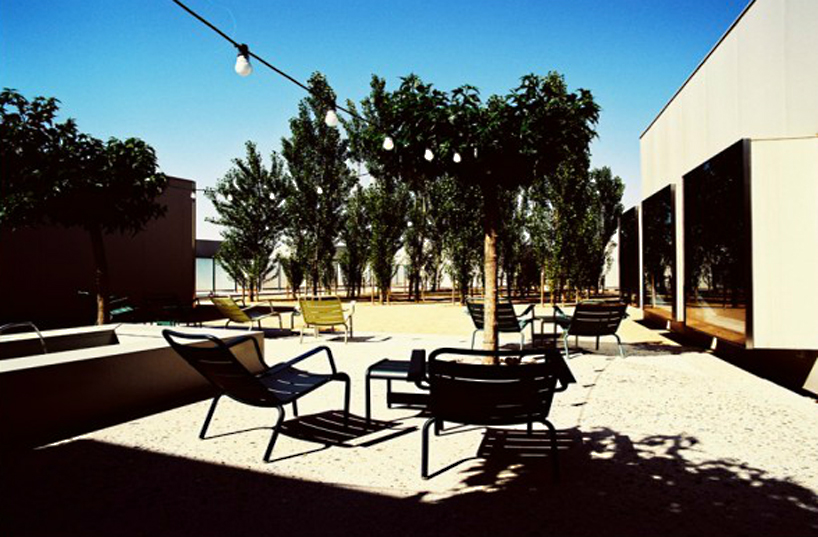 courtyards exist  in between the individual structures
image © jose hevia 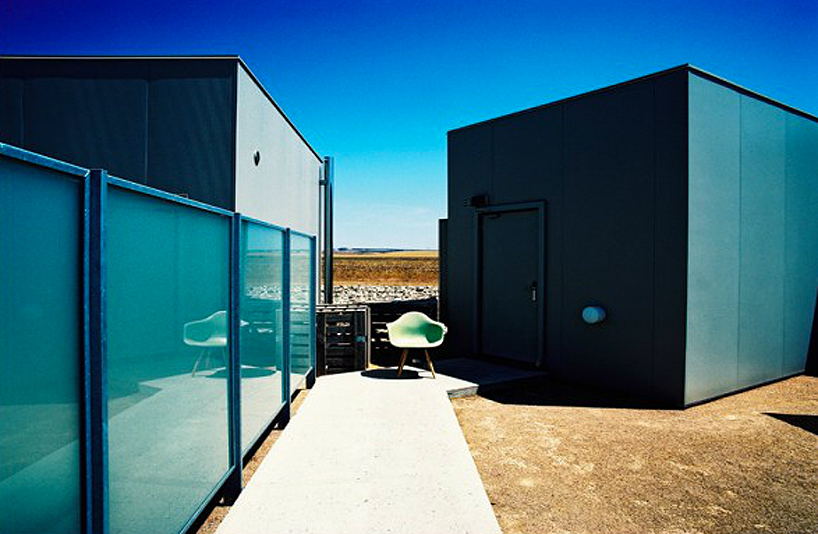 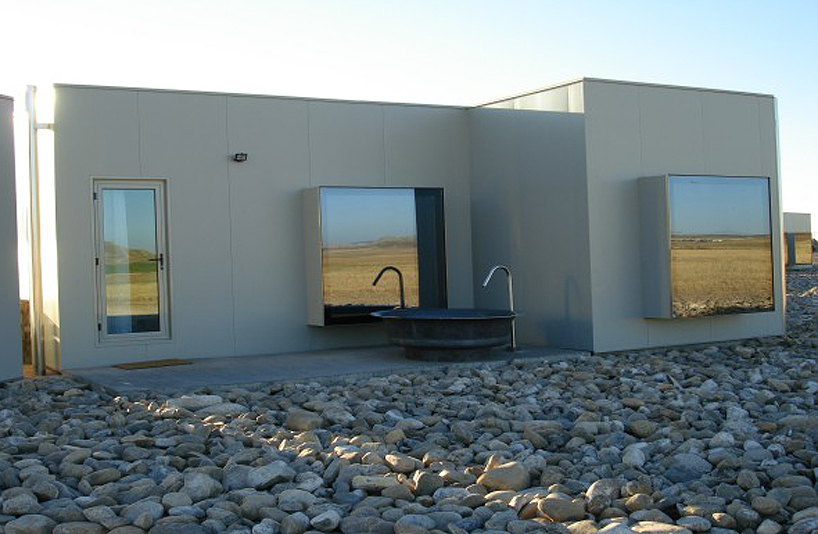 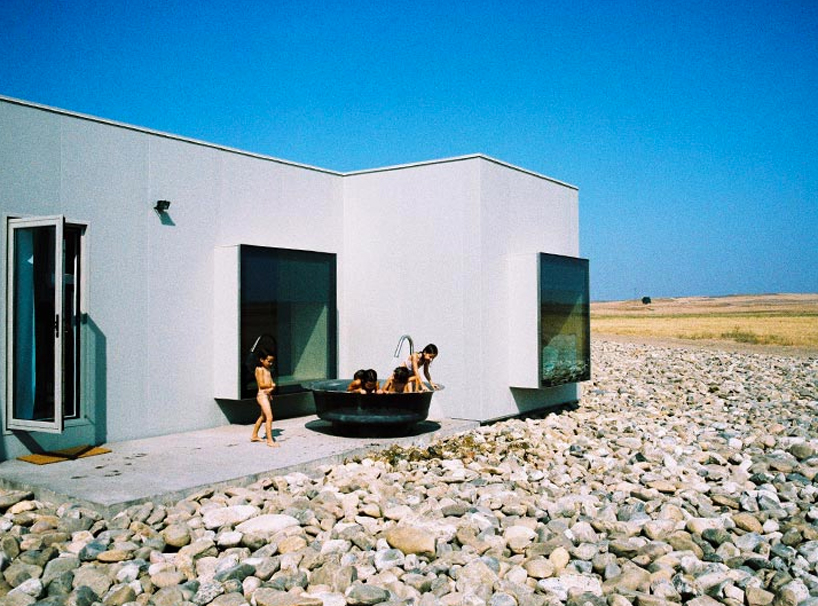 a private courtyard looks out to the landscape
image © jose hevia 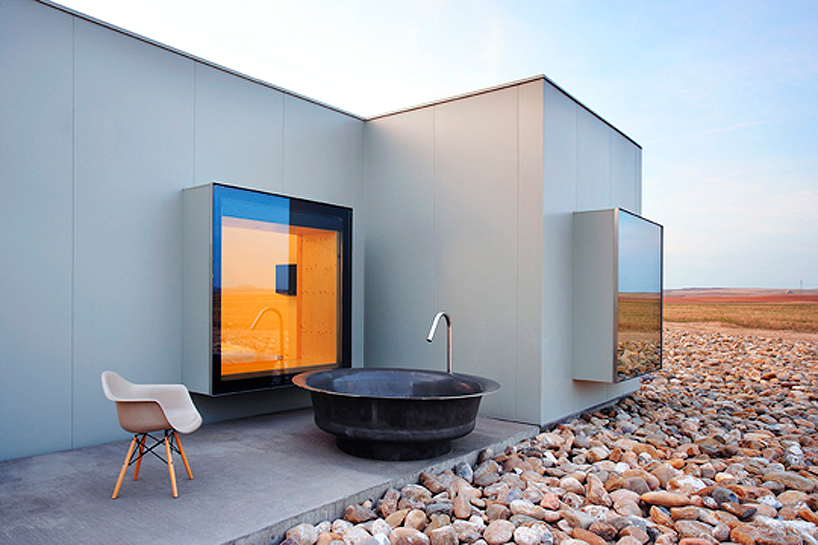 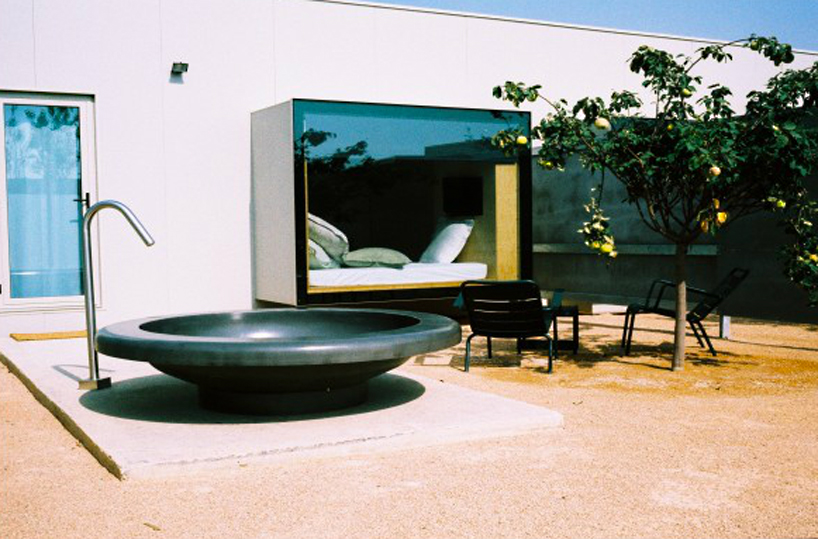 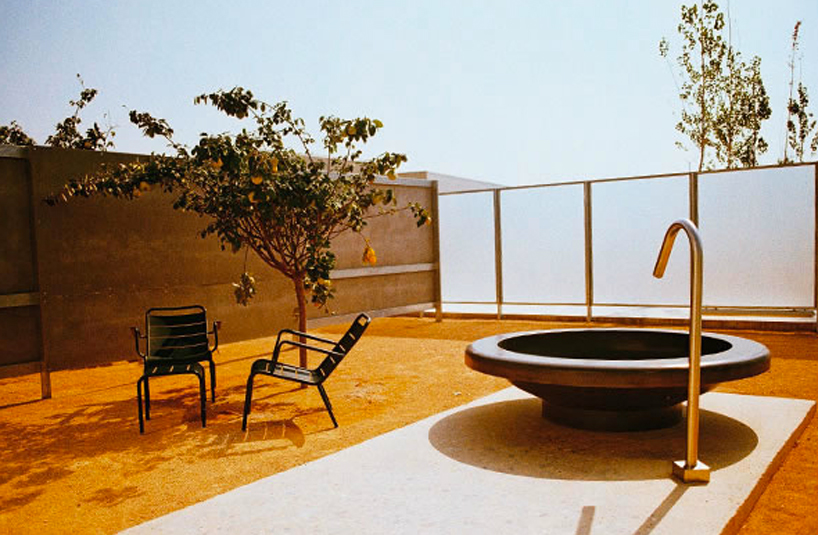 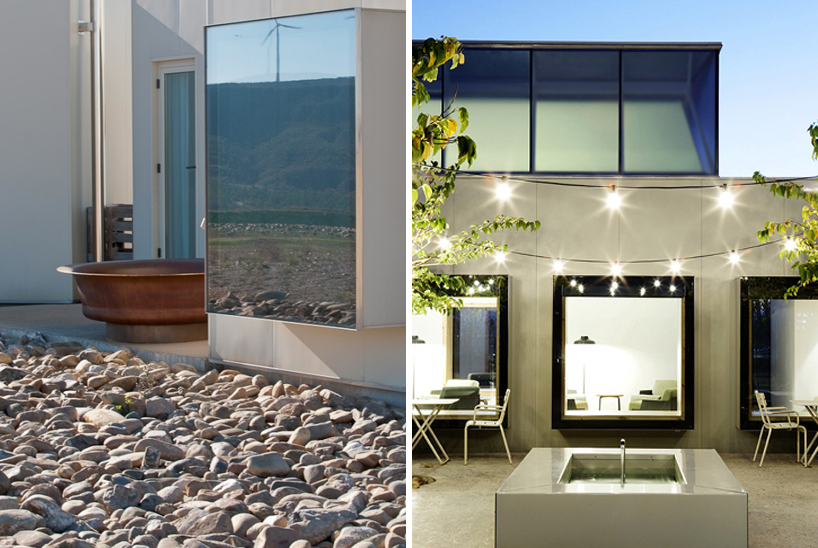 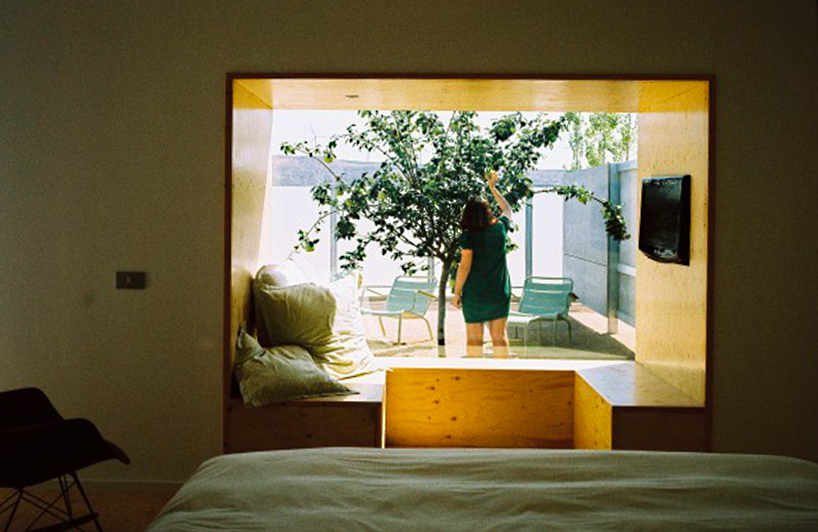 view from inside the room, the window offers a seating area enjoying the views
image © jose hevia 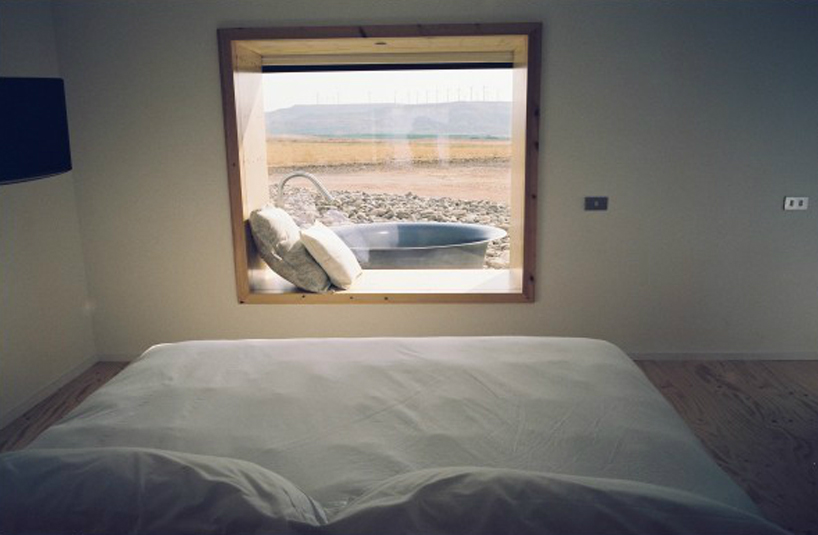 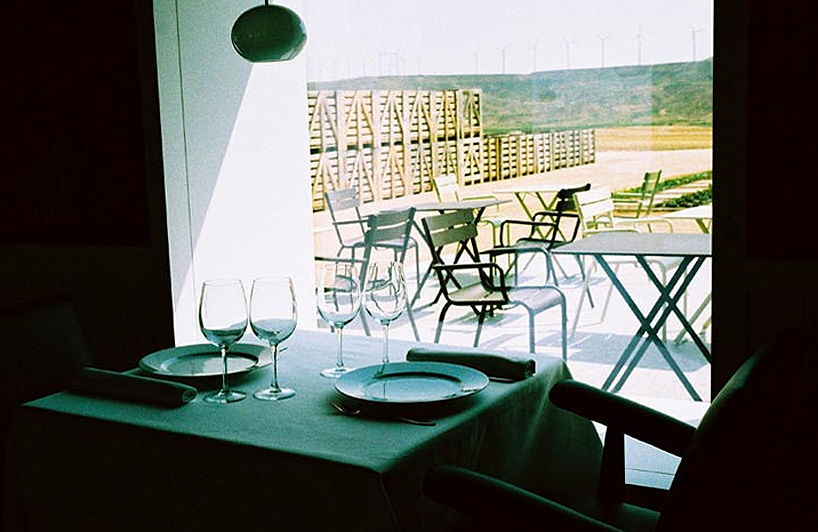 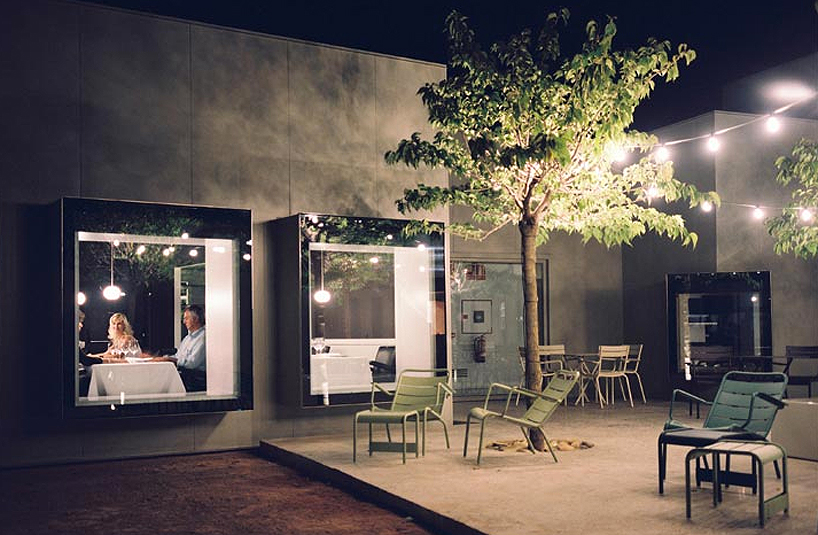 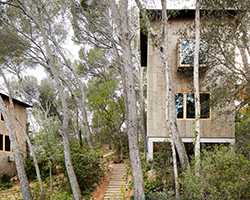 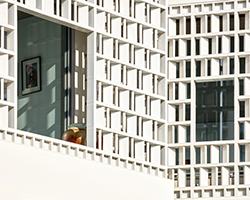