on june 11, 2021, one of the world’s most anticipated football tournaments will finally get underway. after being delayed by a year due to the pandemic, UEFA euro 2020 will see 24 countries competing to be crowned champions of europe. unlike previous editions of the tournament, which have been hosted in a single nation or region, this year’s event will take place across the continent — from scotland to azerbaijan. although most of the stadiums will be operating with limited capacities as a result of social distancing guidelines, fans will be able to attend every game, with london set to host the final on july 11.

ahead of the tournament, designboom takes a look at all 11 venues — designed by architects such as herzog & de meuron, foster + partners, and gmp — that will host one of football’s biggest events. read more about each of euro 2020’s stadiums below. 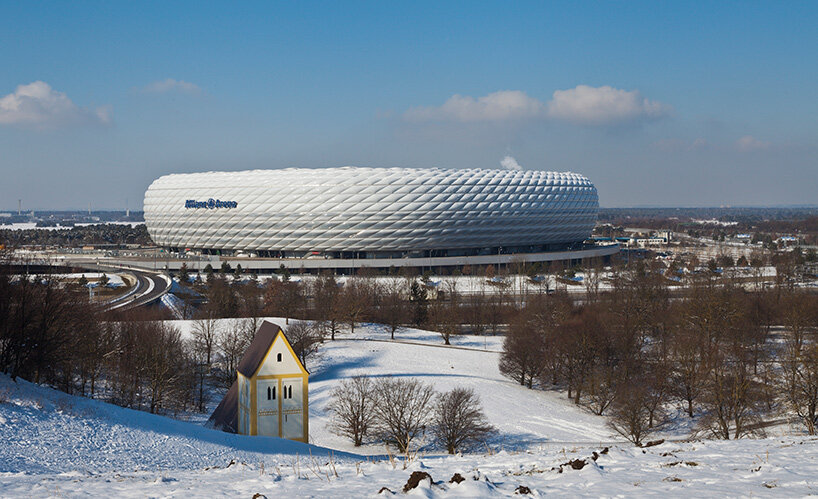 the allianz arena, which will be known as ‘football arena munich’ for euro 2020, opened in 2005 as the first stadium in the world with a full color changing exterior. designed by herzog & de meuron, the venue has a total seating capacity of 70,000 within its ‘crater-like interior’. ‘the skin of the luminous body consists of large, shimmering white, diamond-shaped ETFE cushions, each of which can be illuminated separately in white, red or light blue,’ explain the architects. ‘the changing appearance of the stadium will enhance its attraction as an urban monument even for people who are not interested in football.’ for euro 2020, the stadium will host 14,500 fans for each of its four games, which include germany’s group matches and a quarter final fixture. 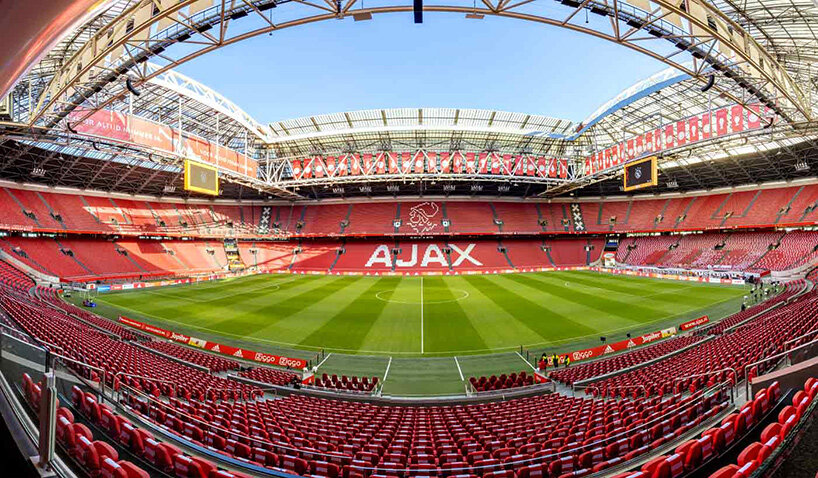 formerly known as the ‘amsterdam arena’, the stadium was renamed in 2018 to honor johan cruyff — the legendary dutch footballer who passed away in 2016. designed by architect rob schuurman, the arena opened in 1996 and has a retractable roof. an ongoing renovation of the building’s façade seeks to improve visitor experience, while adding new facilities to the existing venue. according to current planning for euro 2020, the stadium will welcome 12,000 fans per match — about 25% of its 55,000 capacity. the stadium will host all three of the dutch national team’s group games as well as one game from the competition’s round of 16. 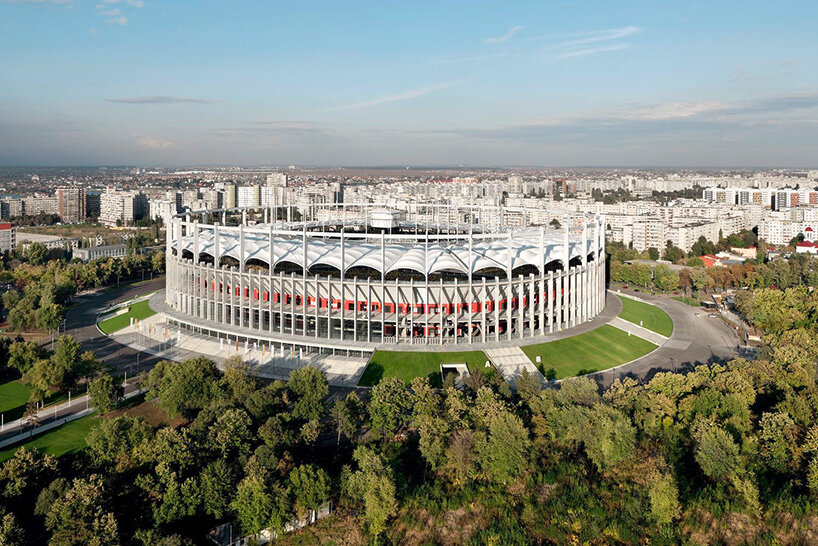 designed by gmp architekten, ‘arena națională’ opened in 2011 and has a total capacity of 55,634. ‘the broad flights of steps following the relief of the earthen bank guide large crowds of spectators, and enter into a spatial dialogue with the existing park landscape,’ explain the architects. ‘the permanent roof, covering all the seating and the mobile pitch roof, displays a wheel-and-spokes design with an outer pressure ring and a pre-stressed cable structure, which follow the elliptical structure of the upper tier.’ the venue will host four games during euro 2020 with 13,000 fans per match — approximately 25% of its capacity. 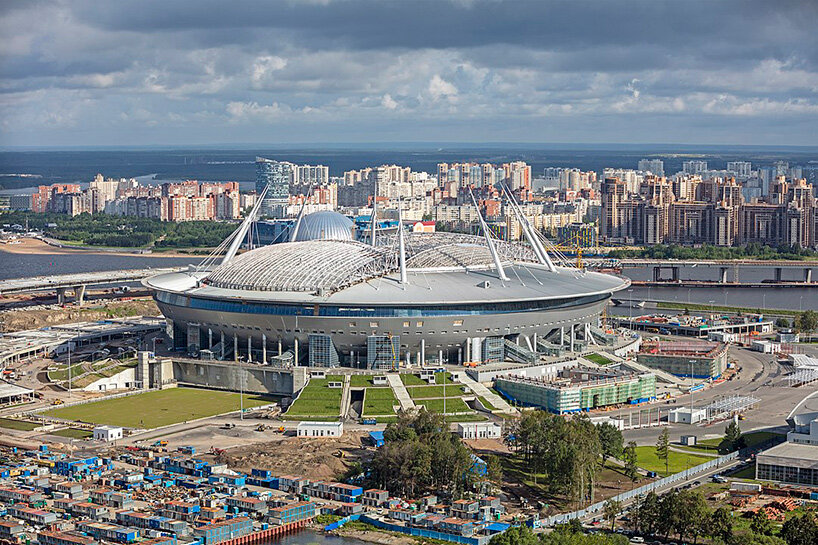 krestovsky stadium, or the saint petersburg stadium, was completed in 2017. the arena was designed by the firm of kisho kurokawa, the japanese architect who designed the famous nakagin capsule tower and was one of the founders of the metabolist movement. the arena is topped with a gigantic flat canopy with an integrated retractable roof. the stadium also uses solar energy and features a rainwater and drainage recycling system. the venue will host a total of seven games, including a quarter final match, at about 50% of its 65,000 capacity. 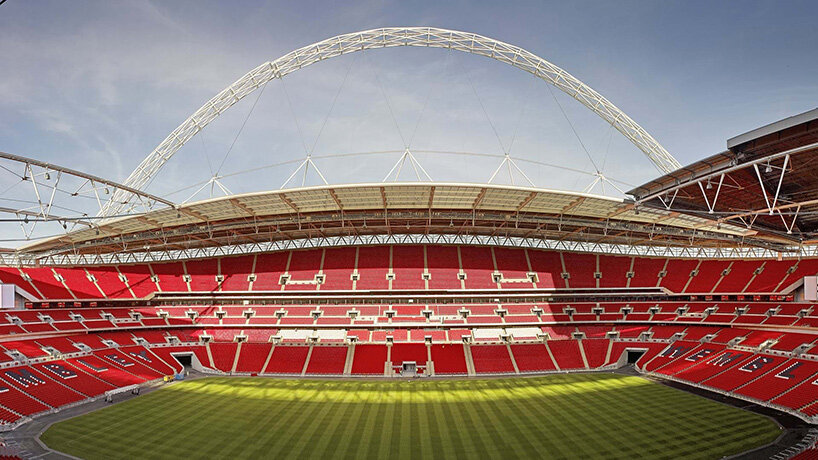 the new wembley stadium opened in 2007 on the site of the original wembley stadium, which was demolished from 2002 to 2003. designed by foster + partners and populous, the arena is crowned by a landmark arch which supports the 7,000 tonne steel roof structure, eliminating the need for pillars. the seating is designed as a single bowl, which gives every spectator an unobstructed view of the pitch. with 90,000 seats, wembley is the largest stadium in the UK and the second-largest stadium in europe. for euro 2020, the venue will host eight matches, including all three of england’s group games as well as both semi finals and the final itself. according to current planning, the stadium will host a minimum of 22,500 fans for each of the first three group matches, with the capacities for the semi-finals and final soon to be announced. 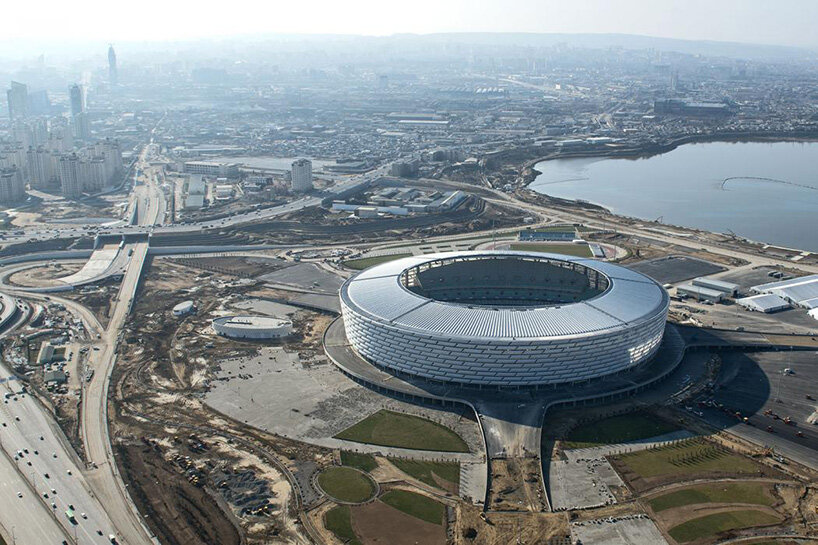 located in the capital of azerbaijan, the baku olympic stadium is a 68,000-seat arena with a design motif inspired by the ‘maiden tower’ — a 12th-century azeri monument. meanwhile, the façade embodies the image of burning flame, which is the symbol of azerbaijan. the design team for the project included heermin architects & planners, thornton tomasetti, tekfen construction, and rossetti. the stadium, which will host four games at 50% capacity, was designed and built in just two years — opening in time for the 2015 european games athletics event. 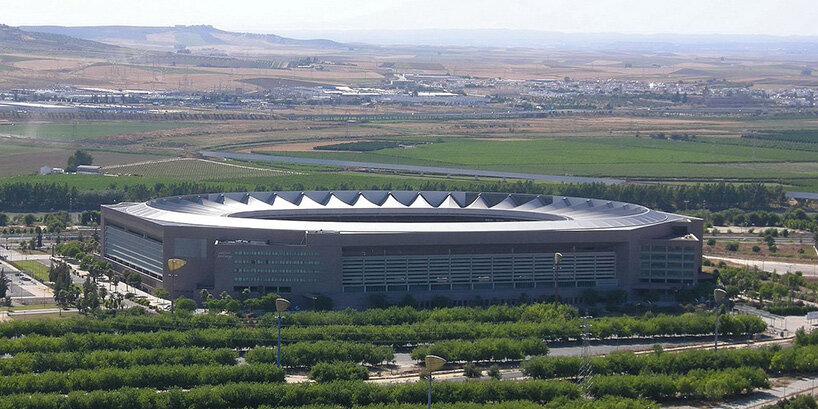 la cartuja, officially known as estadio la cartuja de sevilla, will host four games during euro 2020 — including all three of spain’s group matches. the stadium was designed by cruz y ortiz arquitectos, and opened in 1999. the architects explain that its exposed location called for a building with ‘minimum visual impact’. ‘sinking the level of the sports track in relation to the natural level of the land, the access to the stadium is situated at an intermediate level, resulting in a minor difference between levels for spectators and reducing problems of evacuation,’ says the design team. the arena has a total of 60,000 seats, and will operate at approximately 30% capacity for the tournament.

although it was originally inaugurated in 1953, rome’s stadio olimpico was completely rebuilt for the 1990 world cup when it hosted the tournament’s final. this renovation also saw a roof added to the structure. the arena underwent another renovation in 2008 with the stadium’s facilities upgraded and high definition LED screens installed. these modifications meant that the venue’s capacity was reduced to 70,000. the stadium is set to operate at 25% of this capacity at euro 2020 where it will host all three of italy’s group games and a quarter final match. 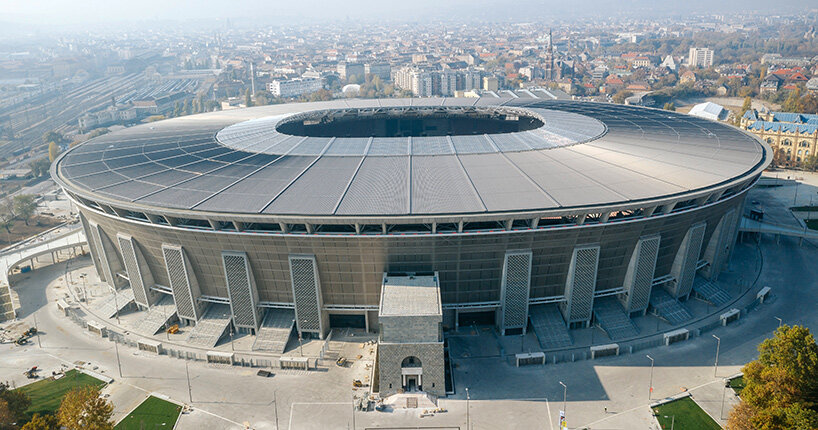 in 2019, the new ‘puskás aréna’ opened in budapest, hungary. located on the site of a previous venue, also named after the legendary footballer ferenc puskás, the stadium can host just over 67,000 spectators and plans to operate at 100% capacity for the four games it will host during euro 2020. designed by hungarian architect györgy skardelli, the bowl of the stadium has three tiers with four large screens occupying each of the arena’s four corners. 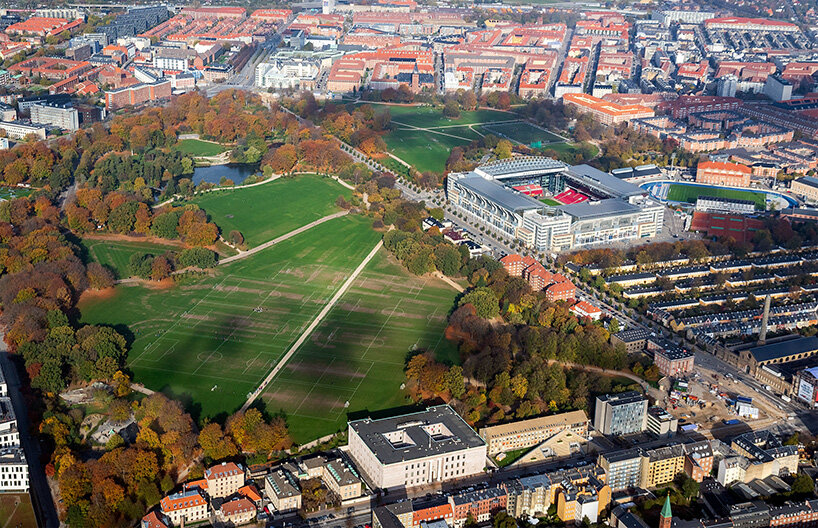 conceived by danish architect gert andersson, ‘parken stadium’ was inspired by large sport arenas that retain a sense of intimacy despite their scale. completed in 1992, the stadium comprises four independent stands and has a three michelin star restaurant on its eighth floor. with a capacity of just over 38,000, the stadium is the smallest of the 11 venues for euro 2020, but plans to host 15,900 fans per match — about 45% of its total capacity. the venue will host four games in total, including all three of denmark’s group games. 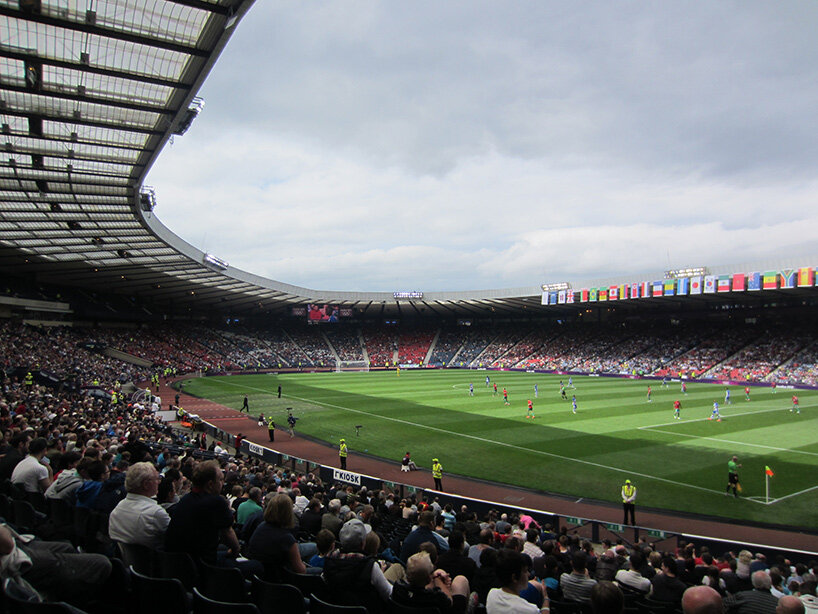 image by daniel from melrose, united kingdom / CC BY 2.0

hampden park, scotland’s national stadium, was the biggest stadium in the world when it opened with a capacity in excess of 100,000 in 1903. the glasgow venue has been renovated many times since then, with the most recent work being completed in 1999. hampden park will welcome 12,000 fans for each of the four games it will host during euro 2020 — about 25% of its current 51,866 capacity.