FR-EE is a global architecture and industrial design firm led by fernando romero with offices in mexico city, new york, and shenzhen. since the studio’s founding in 2000, FR-EE has realized and proposed projects in a number of countries that encompass different programs and contexts, from museums and office buildings in dense urban centers to remote desert structures.

this year, FR-EE is celebrating its 20th anniversary and to mark the occasion, fernando romero has shared with designboom a selection of his firm’s most significant and groundbreaking projects. see each of the ten schemes below accompanied by insight from romero himself. 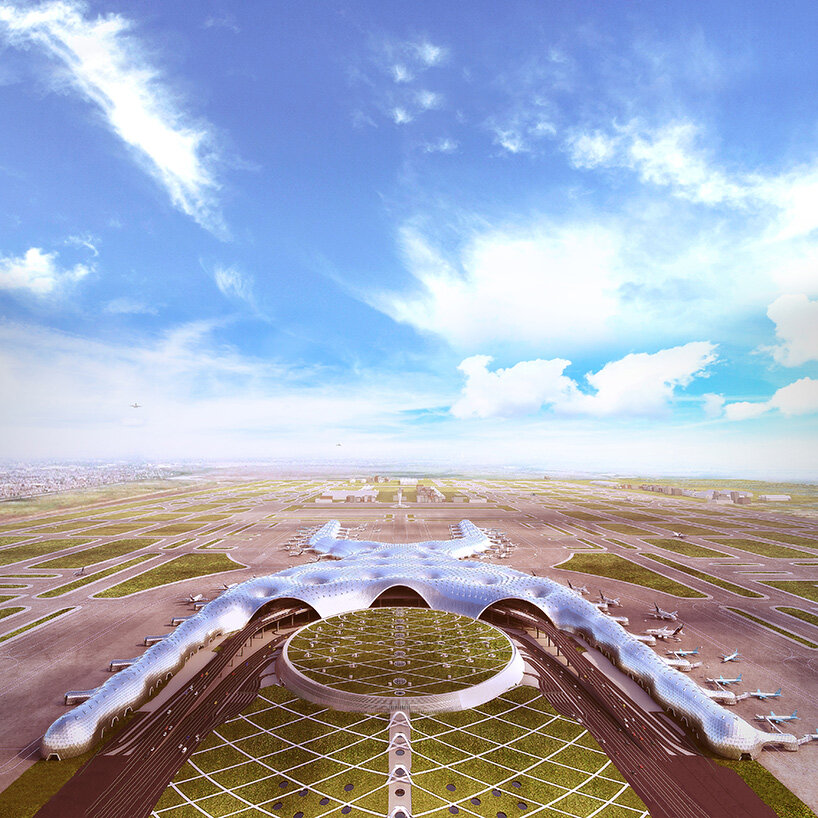 plans for mexico city’s new airport were first unveiled in 2014, with fernando romero’s office teaming up with foster + partners. ‘we collaborated with one of the most important architects of the last century and whose transcendence and experience is enormous: norman foster, from whom we absorbed the knowledge and processes that not only allowed us to carry out this project but also permeated the systems and structure of the office, helping it grow,’ romero tells designboom.

the project was also important for fernando romero and his team because of its vast scale and complexity. ‘an airport is one of the most important works for an architect in their career because of its complexity, coordination, and interdisciplinarity, but above all because it is designed for the user’s experience and the operator’s efficiency — a very big challenge in terms of logistics, security, engineering, and operational issues,’ the architect continues. 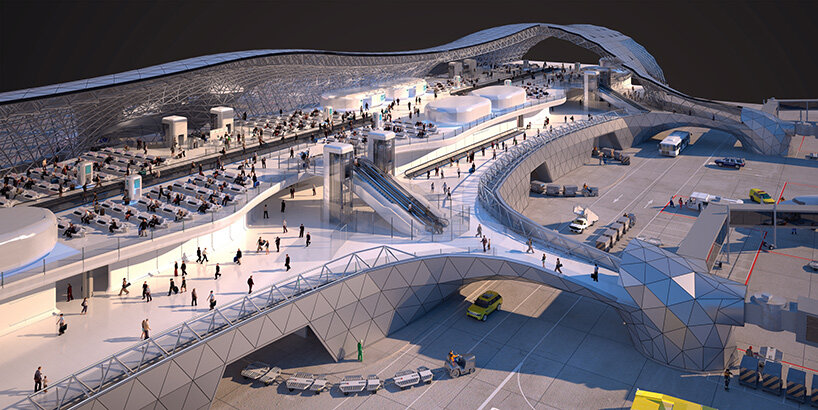 the airport was designed to be one of the world’s largest airports, and mexico’s largest-ever infrastructure project. ‘never before in mexico has a project of such magnitude been conceptualized, developed, and built,’ adds romero. ‘the learning and experience obtained throughout the years of the project has been invaluable.’

if realized, the architect says that the airport would greatly benefit the country’s economy and tourism industry. ‘an infrastructure creation is a generator of direct and indirect jobs, and the airport would be a project that impacts the economy of our country, especially for the moment we were living then and for the one we are going through now. the airport would be the reason and consequence of allowing tourism to increase and be attractive, efficient, and with a promising future.’ 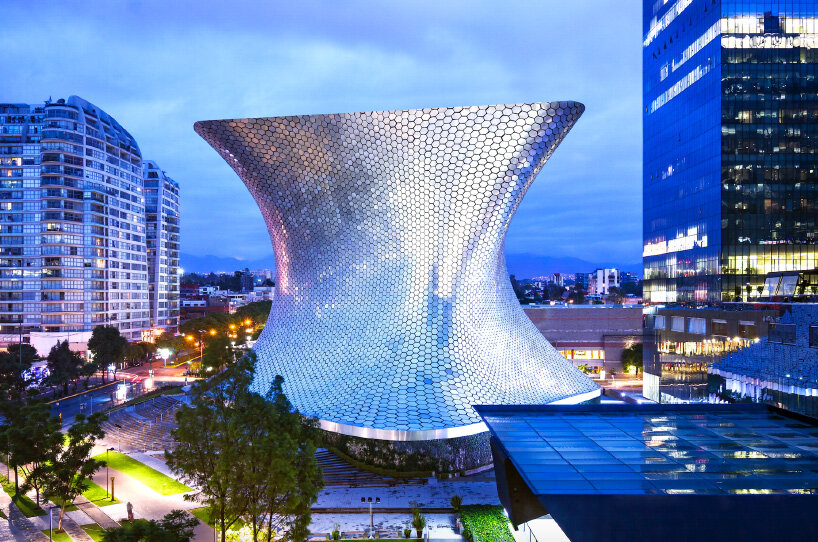 completed in 2011, ‘museo soumaya’ is home to a private art collection of nearly 70,000 works, ranging from the 15th to mid-20th century, including a large collection of auguste rodin sculptures. rising 150 feet (46 meters) at the heart of a new cultural and commercial district, the building’s form is clad with a skin of 16,000 hexagonal mirrored-steel elements. the museum has since become an important tourist destination for mexico city and it remains free and open to the public. 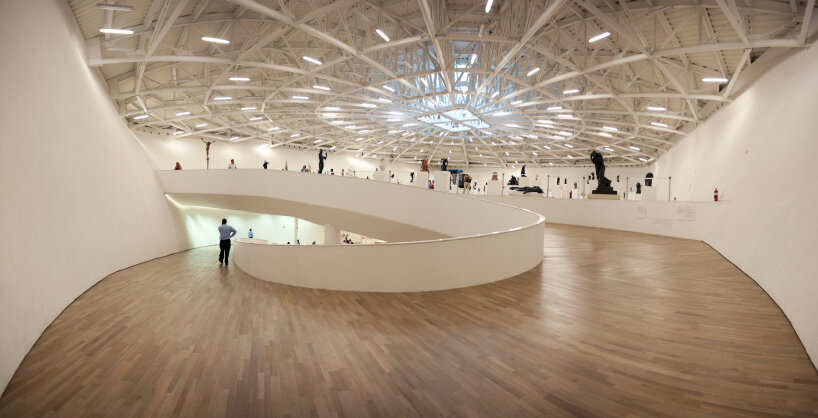 for fernando romero, the museum was a breakthrough project that gave FR-EE its global reputation. ‘it was the first work of importance once I returned from holland after working with rem koolhaas and after having designed ‘casa da música’, a concert hall in porto, which is a cultural and architectural reference today. museo soumaya became the first project of international projection placing the office in different platforms and publications around the world, leading the museum and the office to be recognized and awarded.’ 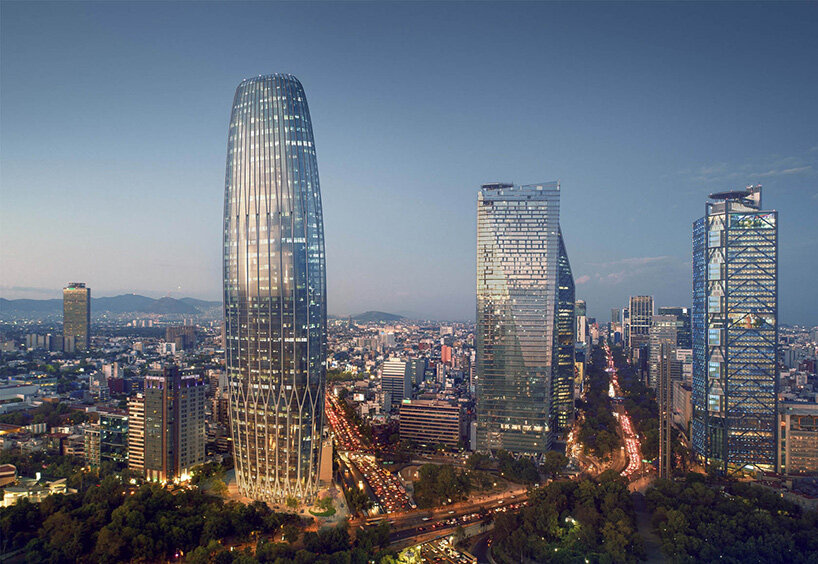 reflecting the site’s unique diamond-shaped geometry, the reforma tower is a 65-story skyscraper designed to serve as a landmark for mexico city. as one of the tallest towers in the country, the project offers privileged views across the metropolis below. the mixed-use scheme has been designed with three levels of commercial space, a 250-key hotel, a restaurant, and a fitness center with a spa and an indoor pool. 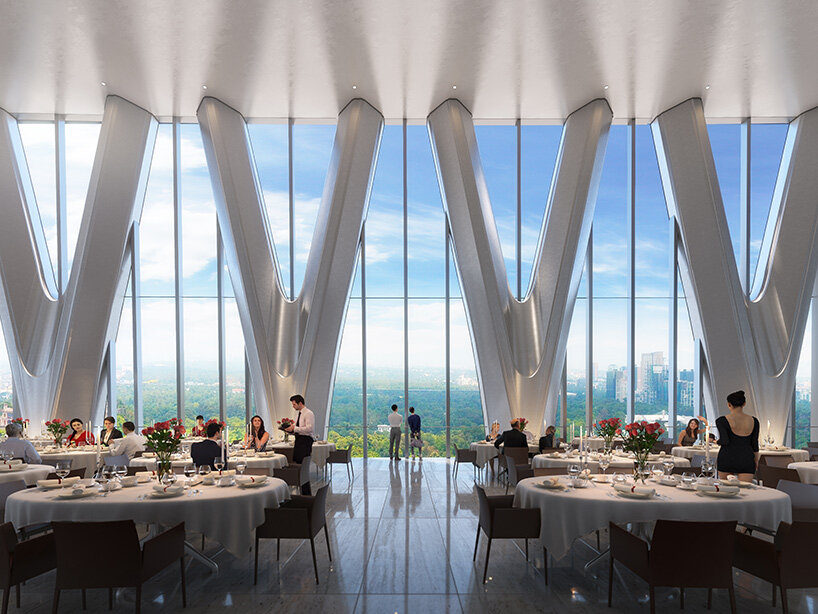 ‘the mixed-use program of the project gives it a special quality and complexity because of the site where it is located and the different uses — the flows and circulation of both users and vehicles was very important,’ fernando romero tells designboom. ‘the unique structure of the building, and what gave it its identity and contemporary appearance, conceptualized in an exostructure, meant a design challenge due to the seismic characteristics of the mexico city valley.’

the national museum of energy and technology (MUNET), (2014) 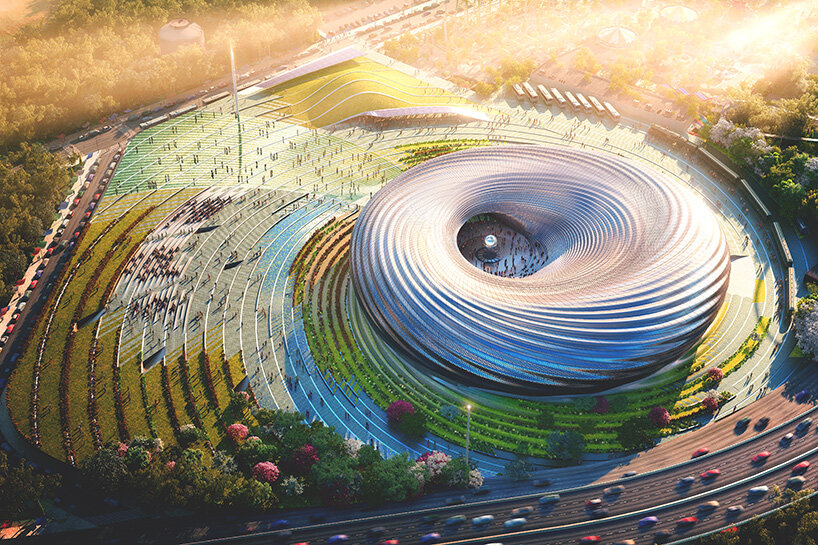 FR-EE’s proposed design for the national museum of energy and technology (MUNET) draws inspiration from the forms of manifested energy at the macro-scale of galaxies and solar systems and the micro-scale of atoms, neutrons, and protons. lines of energy converge within the interior void of the building to highlight and emphasize one of its signature experiences: a floating sphere lifted by magnetic force. this central void becomes the focal point of the site and the geometric origin of the design. 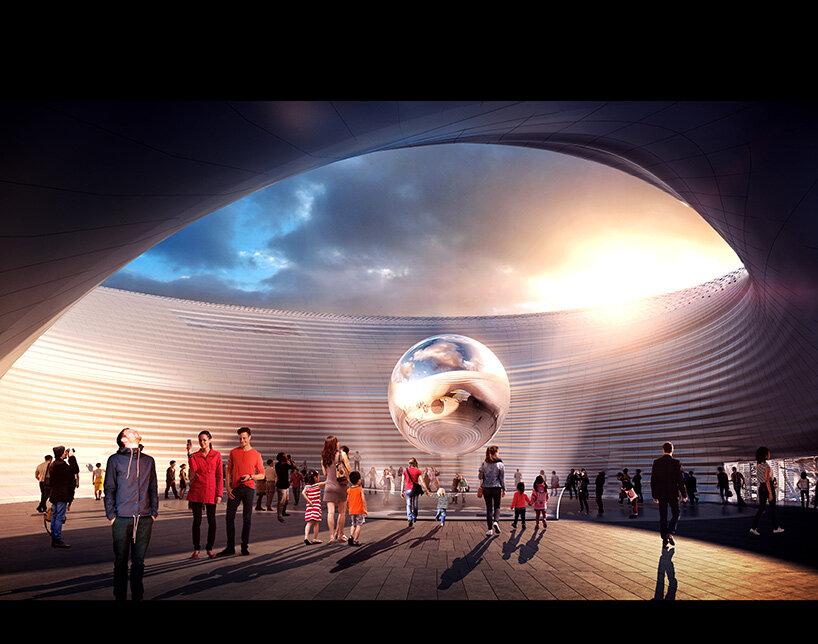 ‘the project was the first in our office, and in the country, to be conceptualized as net-zero,’ states romero. ‘this means that not only would it have a small impact footprint on its construction, but it would reduce the footprint of other surrounding buildings by returning electricity and water to the city.’ 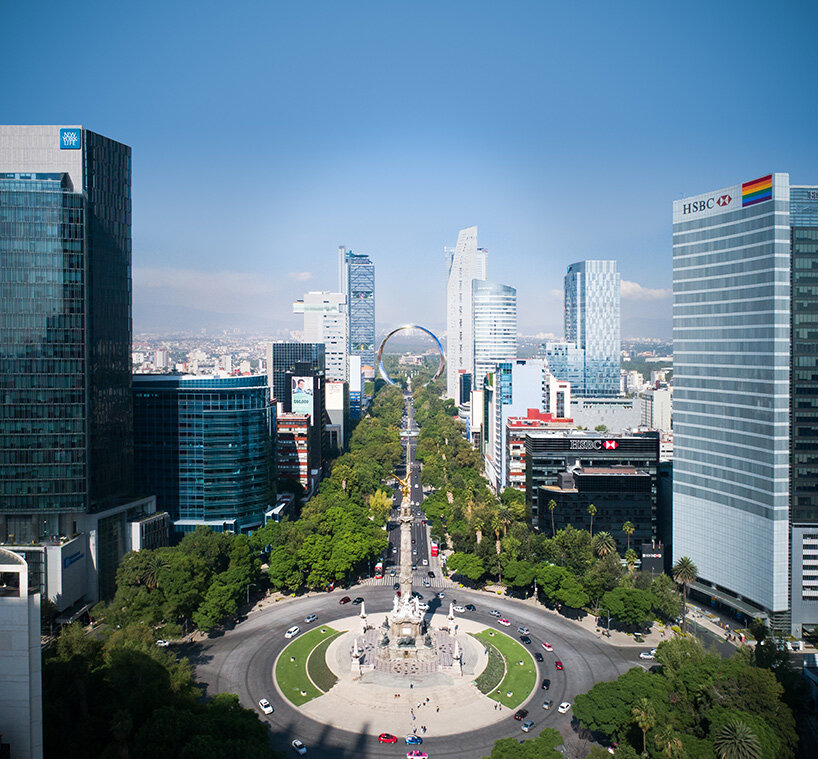 together with pedro ramírez vázquez, the acclaimed mexican architect who passed away in 2013, FR-EE participated in a national competition to design a new monument and civic space to commemorate mexico’s bicentennial anniversary of its independence. the bicentennial ring, or the ‘anillo bicentenario’, is formed by a loop built on a möbius strip with the ring’s lower part remaining underground. ‘the anillo bicentenario project has a very important background for the office,’ explains fernando romero. ‘it was the first commemorative monument where we competed against great names in the world of architecture, and especially in a place as emblematic as paseo de la reforma in chapultepec.’ 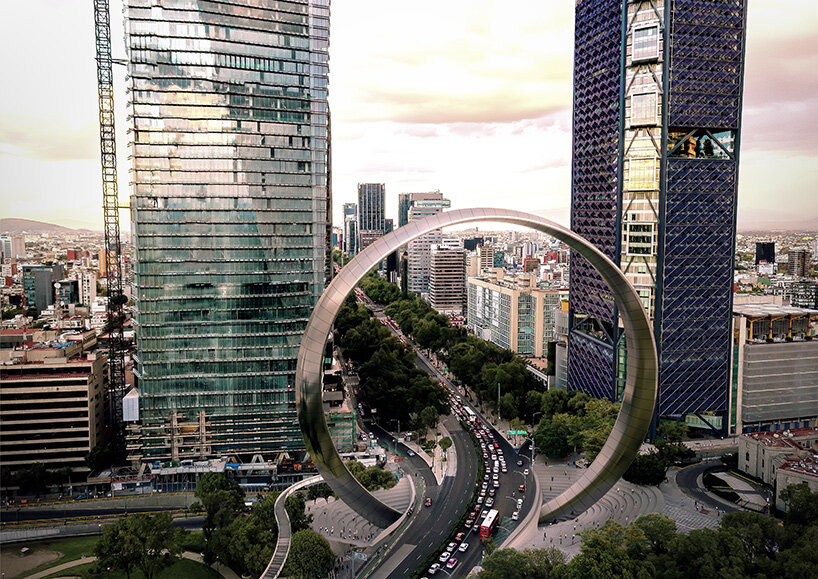 ‘this project was full of symbolism. the ring is a symbol of commitment, of celebration. the ring was formed by a möbius strip, divided into 200 pieces which commemorated 200 years of the independence and 100 years of the revolution. the most relevant part of this project was the collaboration and joint design that came from working hand in hand with one of the most representative architects of mexican modernism, pedro ramírez vázquez, who built and designed various buildings in mexico city that nowadays give identity to the architecture of this great city.’ 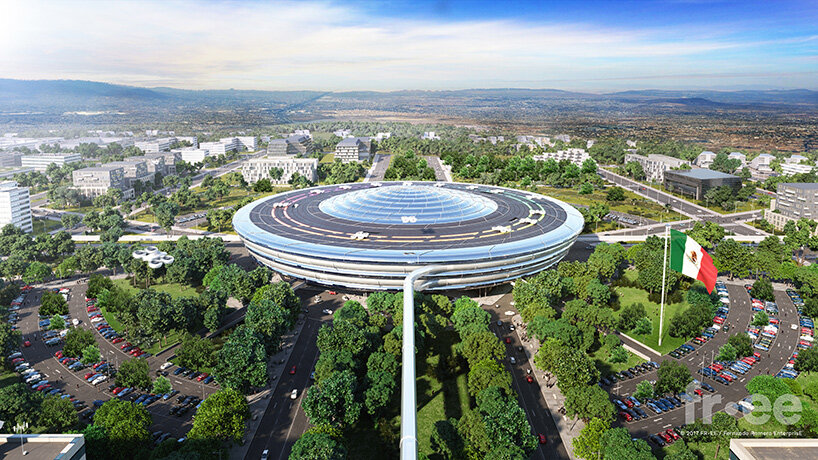 the FR-EE-led mexloop consortium’s winning corridor for the hyperloop one global challenge provides an in-depth look at the potential of developing a groundbreaking new transport system with intermodal hubs and transit oriented development across central mexico. linking the country’s major population, cultural, industrial, and manufacturing centers, the proposal harnesses over 30% of its population and nearly 40% of its GDP, connecting mexico city with the cities of querétaro, leon, and guadalajara to create a new ‘megalopolis’. 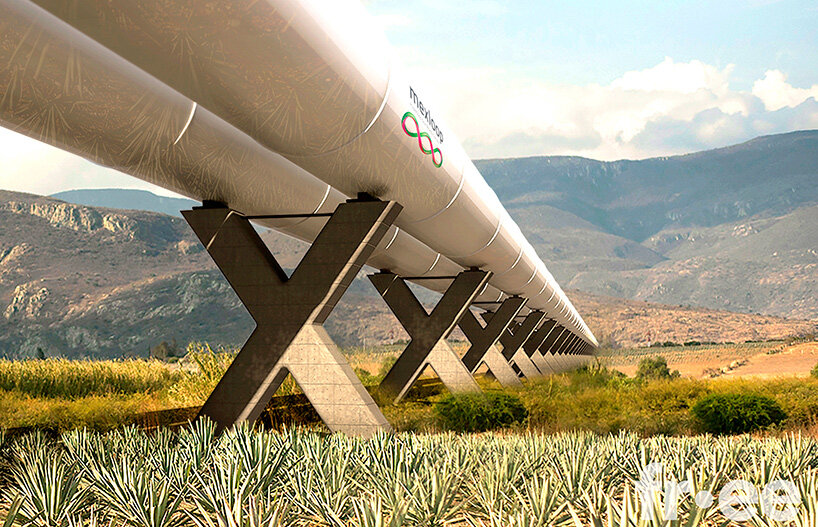 ‘our vision, mexloop, focused on the mexican altiplano, a region with great vision and growth in the aeronautical industry, which would be the main beneficiary and job creator of mexloop’s construction and operation,’ explains the architect. ‘the project represented one more success story and an example of success that confirms that the office has the tools to compete globally in other disciplines such as infrastructure and above all with a factor of complexity and integration of technologies.’ 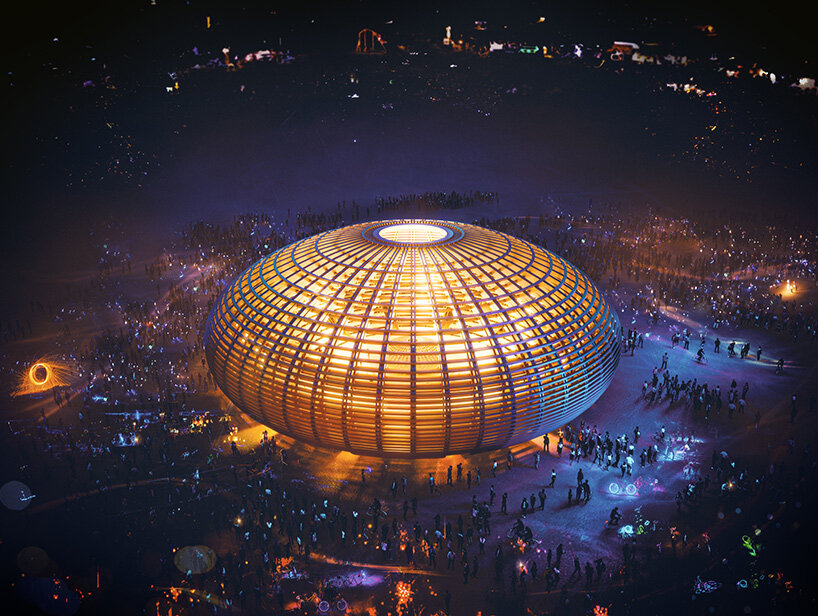 the holon temple proposal by FR-EE and planet collective takes influence from the ancient greek word ‘holon’, which describes an object that is both complete unto itself and an integral part of a larger system. guided by this concept, together with the principles of burning man, the temple takes the form of a wooden ellipsoid housing a smaller version of itself that serves as an altar. 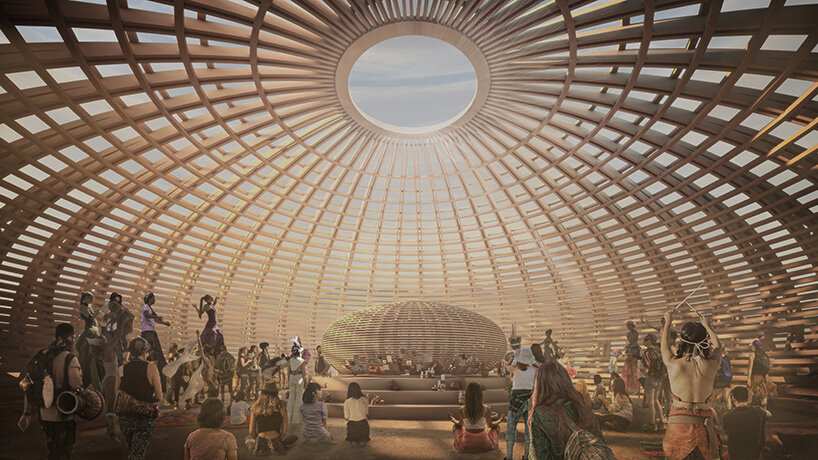 ‘the pavilion of holon at burning man has a particular meaning for being a space of congregation, meditation, contemplation, and with a timeless and temporary character since the project had to be built in the middle of the desert during a festival that lasts 15 days,’ romero tells us. ‘the requirements demanded that the project be zero footprint, which meant that the pavilion would have to have a minimal impact in terms of its manufacturing, transport, and construction.’

developed in collaboration with architecture firm zeller & moye, ‘archivo’ was designed to offer a mixture of programs that aims to further enrich the cultural life of mexico city. the proposed hub comprises spaces for exhibitions, educational activities, communal events, and commerce. a wide spectrum of communal life forms an integral part of the project including spaces for workshops, dance classes, and urban gardening in the surrounding green terrain. 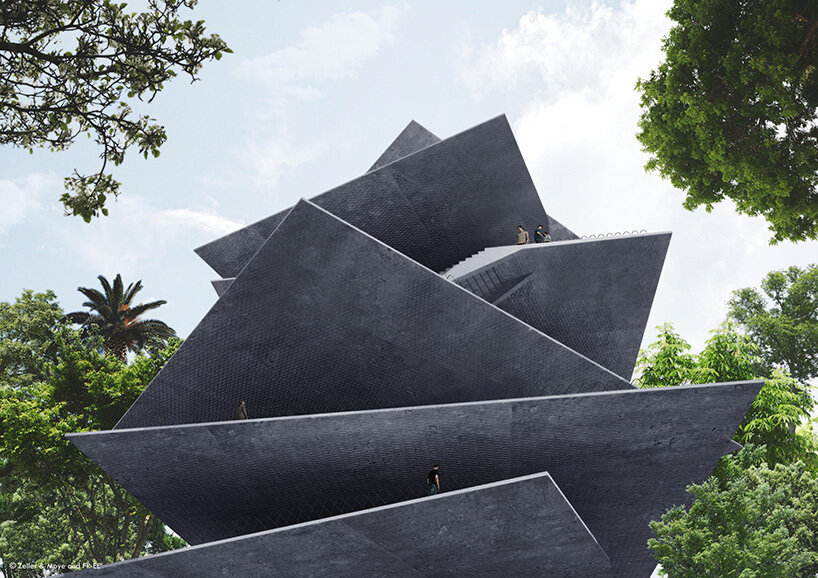 ‘this pavilion was important in the office’s trajectory because it was the motor and materialization of the private collection of mexican and international design that I have acquired over the years, and which led to the consolidation of ‘archivo, diseño y arquitectura’ — the name of the space that would house this collection,’ romero explains. ‘although the pavilion was not built, the collaboration and development of the design helped to physically consolidate the space where the collection should have been shown.’ 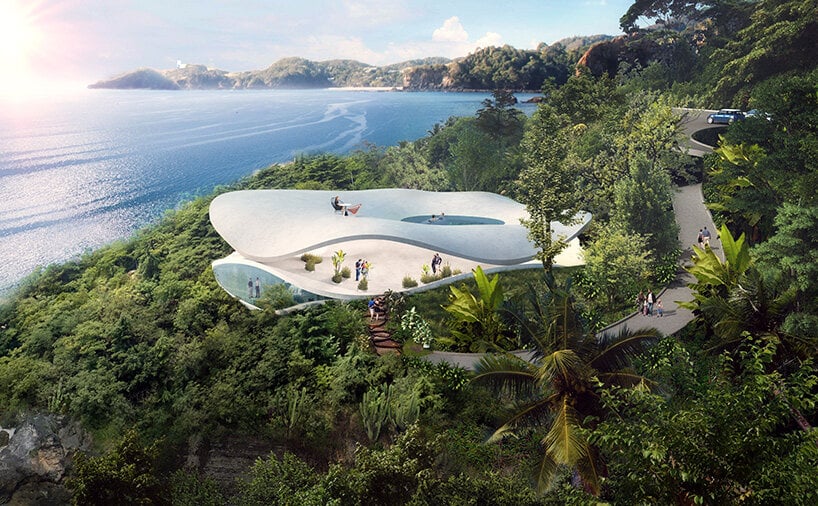 overlooking the sea from the rocky cliffs, ‘villa organica’ was designed by FR-EE to become part of the landscape. ‘the rigor of study and analysis that is done for a villa is not less than those of larger scale projects,’ romero says. ‘on the contrary, here what is studied is the detail and this leads to an incredible design process and feedback for the design teams, models, 3D, and the client. the villa has been such a dedicated and delicate design process that it reminds me of the process that barragán went through when designing his studio-house.’ 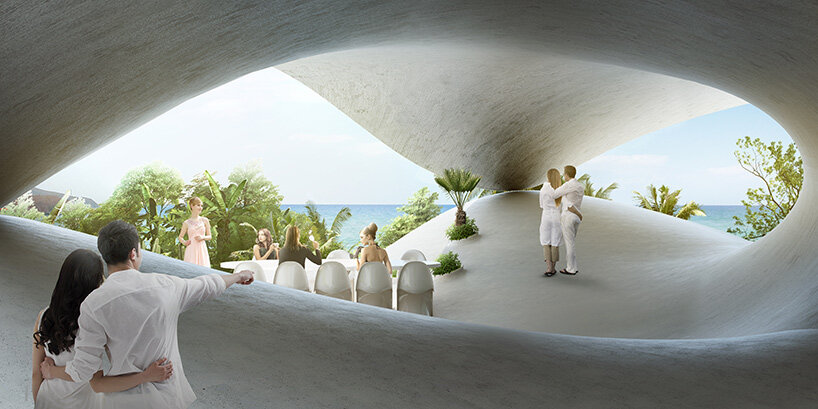 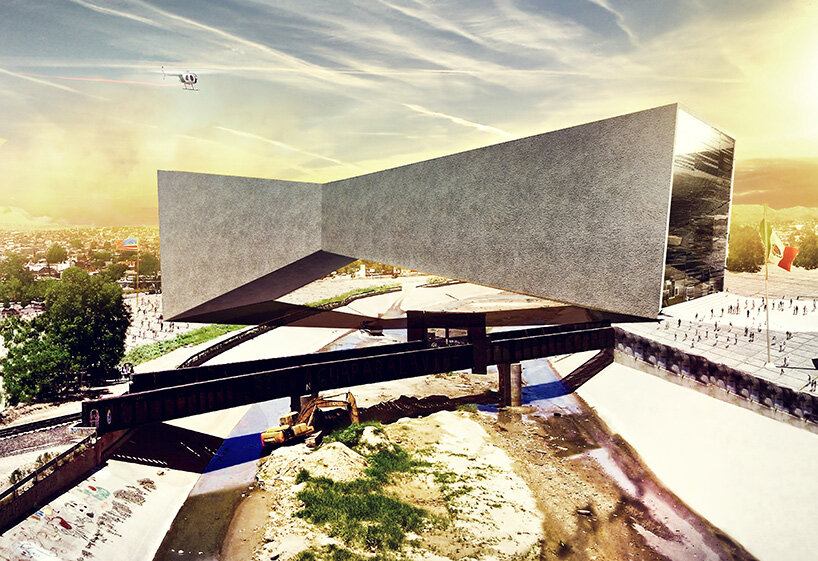 in the early 2000s, FR-EE proposed a bridge museum to mark a historical moment in strengthening ties between the united states and mexico. the bridge is envisioned as a place for amplifying the bond between the superpower and its neighbor, as well as providing a variety of services for exchange between the two countries. it also contains an active cultural program consisting of exhibition spaces, an auditorium, a library and a commercial area. 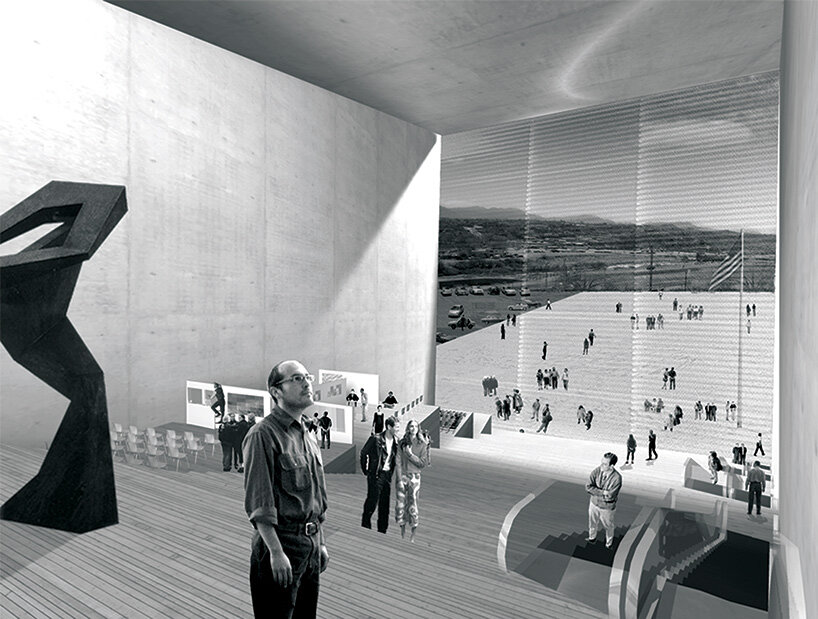 ‘in a time of crisis where there was little work, the office looked for ways to attract clients and make projects that would begin to generate discussion and research,’ fernando romero tells designboom. ‘part of that process led to two interesting lines of work. the first was the hyperborder book for which we already had the experience of our first MCMA book, and where we now focused on migration and the U.S.-mexico border, particularly ciudad juarez. thanks to these collaborations and lines of work, the bridge museum project was born. this project sought to consolidate a cultural, social and encounter space between both cities and above all to speed up the migratory processes, strengthen the relationship of both border cities, and create an icon and identity between them by breaking the tangible and intangible border and creating a space of unity.’

see all of FR-EE’s projects featured on designboom on our dedicated page, here. 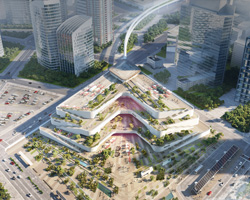