ABIBOO studio has led the architectural design of a self-sufficient and sustainable city on mars that could house one million humans. ‘nüwa’ forms part of an exhaustive scientific work for a competition organized by the mars society, and fully developed by the SONet network, an international team of scientists and academics led by astrophysicist guillem anglada, who headed the discovery of exoplanet proxima-b. considering the atmospheric conditions, ABIBOO chose the side of a cliff on mars to build a vertical city, with the design and construction systems a result of the planet’s harsh conditions. ‘if we were to construct the buildings as on earth, the buildings would tend to explode from the pressure,’ says alfredo muñoz, founder of ABIBOO. ‘the solar and gamma radiation on mars forced us to build spaces that are not directly exposed to the sky.’ 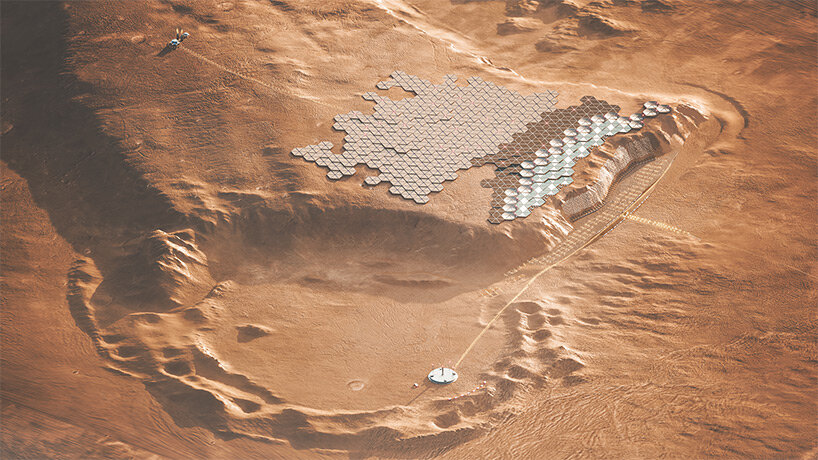 the design by ABIBOO includes five cities, with ‘nüwa’ as their capital. each city accommodates between 200,000 and 250,000 people and follows the same urban strategy. ‘abalos city’, for example, is located in the north pole to leverage the access to ice, while ‘marineris city’, is located in the most extensive canyon of the solar system. ABIBOO’s solution is a flexible and scalable model that could be easily applied to many other martian surface areas. 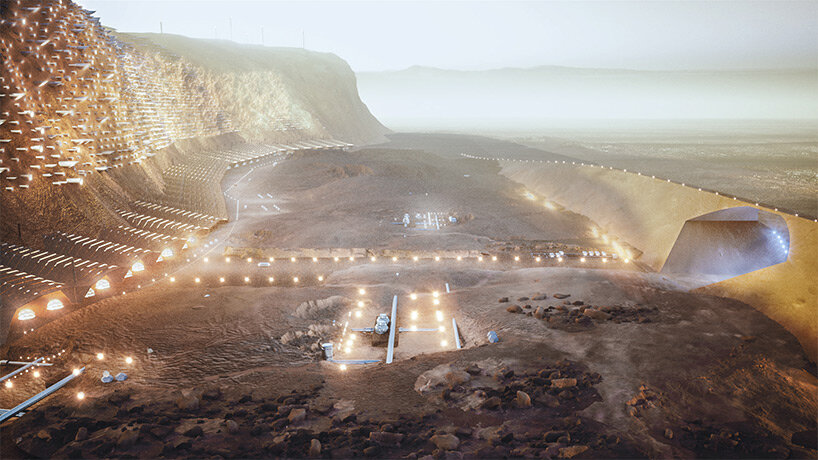 working alongside academics and other members of SONet, the architects developed solutions for structures that protect inhabitants from the radiation on mars, ensure indirect access to sunlight, protect from potential impact from meteorites, and solve the atmospheric pressure difference between the inside and the outside of the buildings. furthermore, the urban configuration had to consider the life support systems, such as food, air, and water production. 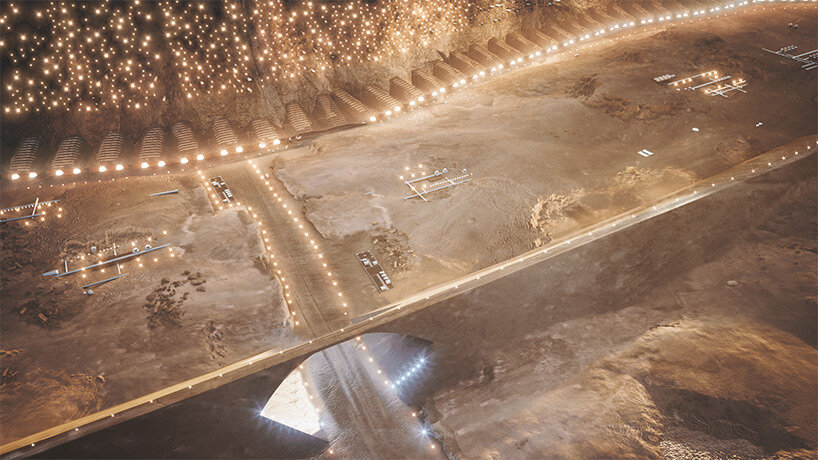 ‘nüwa’ sits on the slope of one of the martian cliffs with abundant water access, with a steep terrain offering the opportunity to create a vertical city inserted into the rock, protected from radiation and exposed to indirect sunlight. ‘macro-buildings’ are excavations inside the rock of the cliff — implemented after tunneling, they are modular and include residential and work activities, linked together by a three-dimensional network of tunnels. comprising two floors, the modules have a tubular shape that spans 10 meters in diameter and 60 meters in length. three residential and three work modules offer a highly flexible and scalable opportunity to recombine the programs as needed. all modules contain green areas and urban gardens with animals and bodies of water designed to provide physical well-being, and spaces for art. to create an emotional connection with earth, the design team has included vast, artificially created two natural spaces called ‘green-domes’ — one that allows human presence and act as parks, and another that includes experimental vegetation in an environment with a purely martian atmosphere. 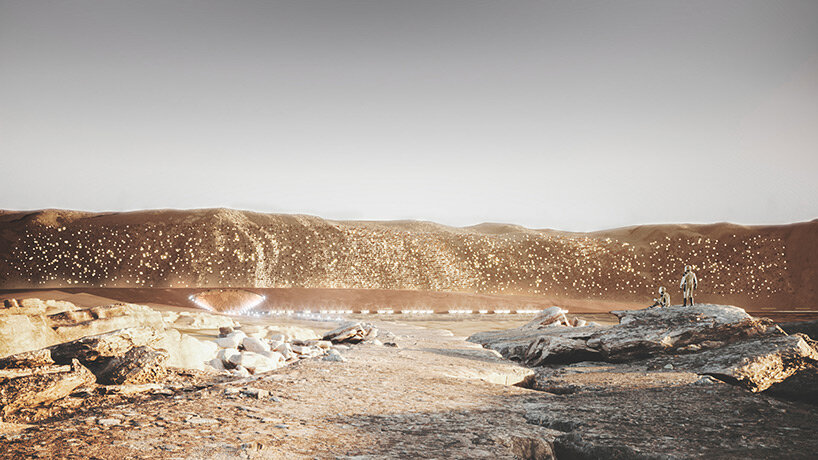 meanwhile, the ‘macro-buildings’ on the cliff are connected by high-speed elevator systems, similar to skyscrapers on earth. this infrastructure also connects the bottom of the cliff with the top and has intermediate stops at the ‘sky-lobbies’, that connect the ‘macro-buildings’ with a separate elevating system. the highest point of the cliff is the mesa — a vast plain that contains the infrastructure dedicated to manufacturing, food production, and energy generation.

at the foot of the cliff, large pavilions designed with translucent skin offer views of the landscapes of mars and a space for social interaction in the valley. the domes are protected from external radiation by large overflying canopies. the material from the cliff’s excavation is dumped on top of the roofs, protecting from radiation. at the same time, this strategy ensures recyclability even at a large-scale. 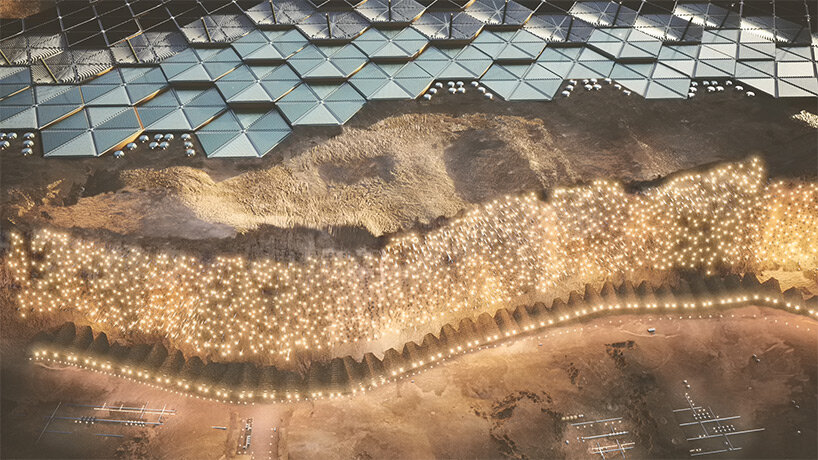 in the valley, specific structures house hospitals, schools and universities, sports and cultural activities, shopping areas, and train stations that communicate with the space shuttle. an artificial mountain created with additional material extracted from the excavations acts as a visual frame for the city, and contains auxiliary energy systems, storage, and parking for rovers and intra-city trucks. 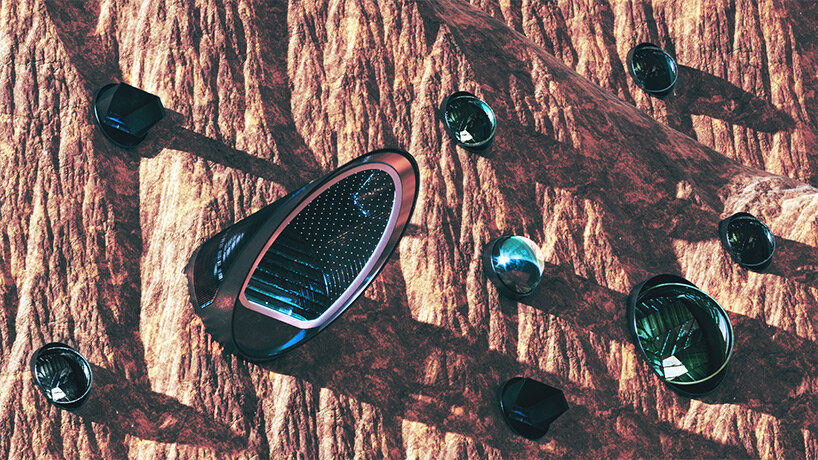 a human settlement on mars also requires structures to fulfill the essential functions of air, water, and food production. in ‘nüwa’ and its adjacent cities, all the architectural constructions include additional safety aspects to regulate the internal atmospheric pressure and offer refuge zones for emergency cases. air showers have been placed at each ‘macro-building’ entrance to clean and sterilize as health protection measures. 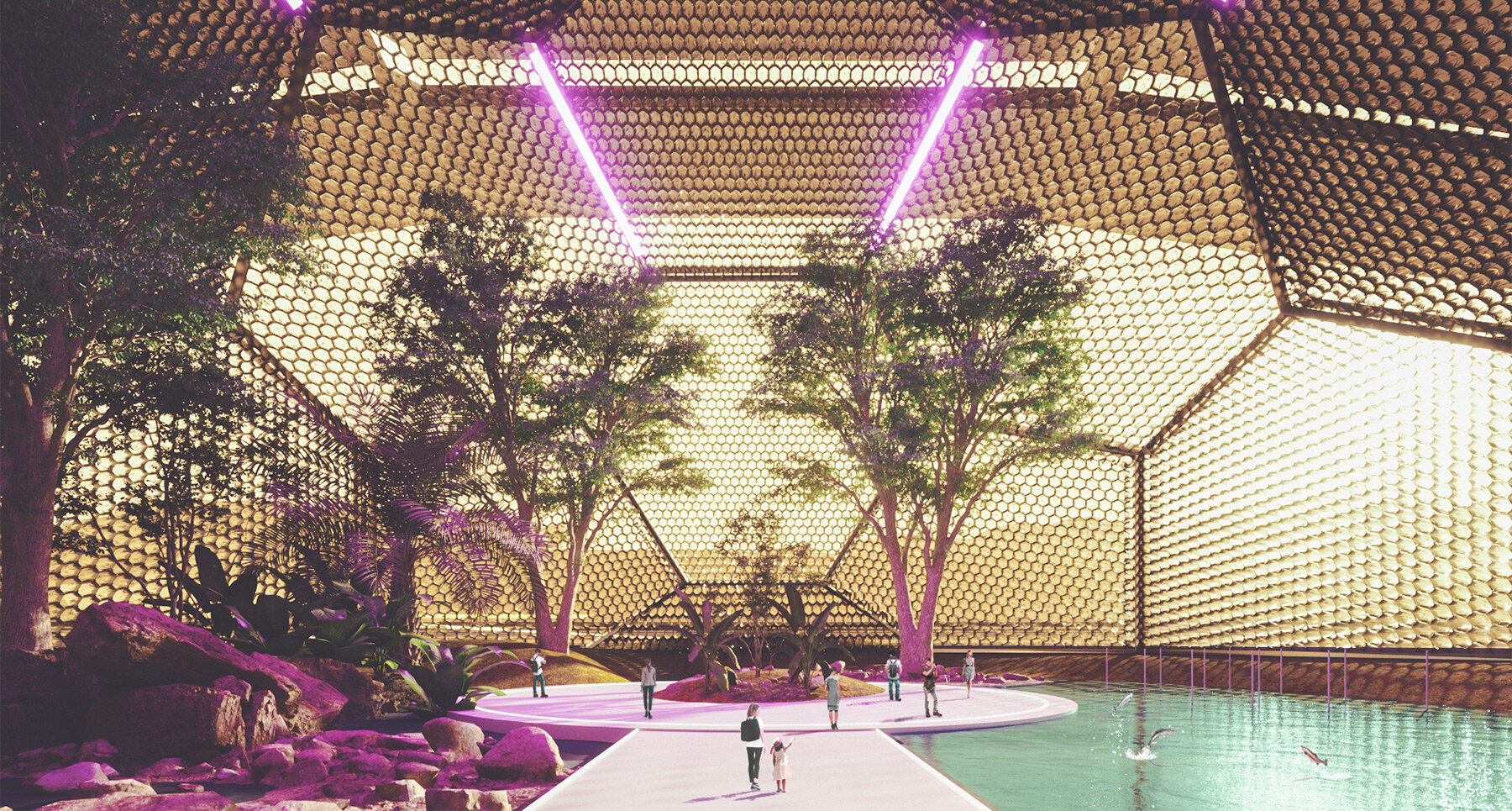 crops would be grown in agricultural modules with a CO2-enriched environment, which will not be breathable for humans. as a result, the operational tasks in these facilities will be automated. to increase the crops’ efficiency, SONet’s expert astrobiology team opted for a hydroponic system that requires less water and space than other methods based on above-ground crops. the production of algae, cellular-meat, and bacteria for waste processing are also completed in this sector. farming areas for animals and insects have been located at the valley, close to communal city areas, as they need a human-like atmosphere to live. 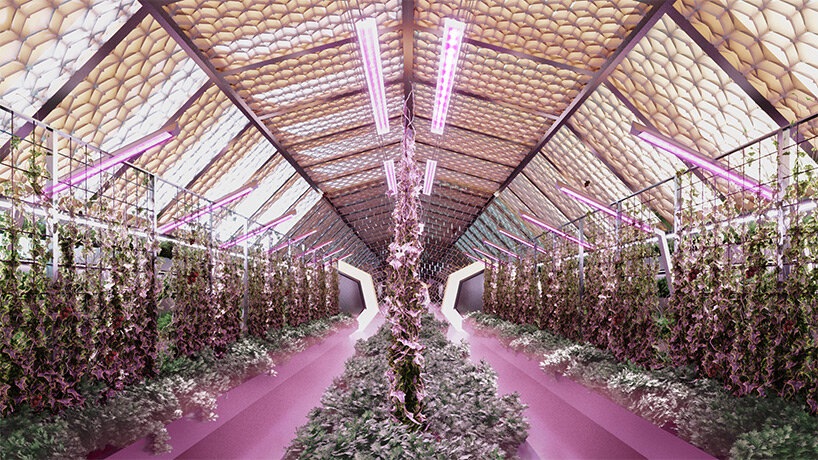 mobility within the city is carried out in a vertical direction along the cliff through high-speed elevators. additionally, a system of buses and light-trains provides intra-city horizontal transport. a network of train stations connects to the space airport, located at a nearby crater. all transportation within the city is carried out within pressurized spaces through electric vehicles. mobility between different martian cities is solved by buses or trains that travel on paved roads. 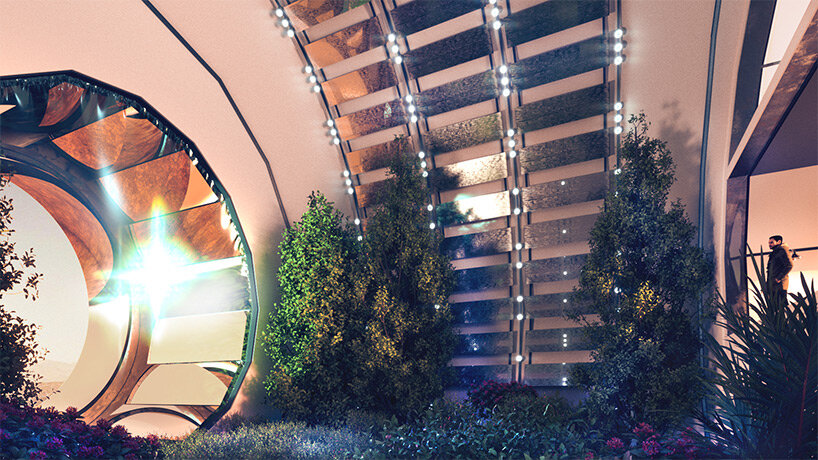 finally, ‘nüwa’ and adjacent cities exponentially accommodate their population. after an initial short period of capital investment and supply from earth, this urban development on mars maintains and grows by its means and sustainable manner. all the materials required for constructing the city are obtained on mars by processing carbon and other minerals. the scientists at SONet and the architects at ABIBOO analyzed the materials needed for ‘nüwa’ and how to manufacture and obtain the required system with local resources in a sustainable manner. read more about the project here. 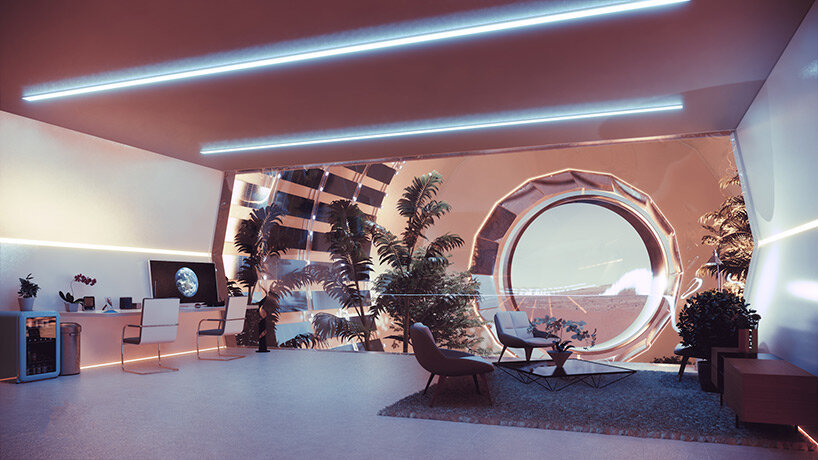 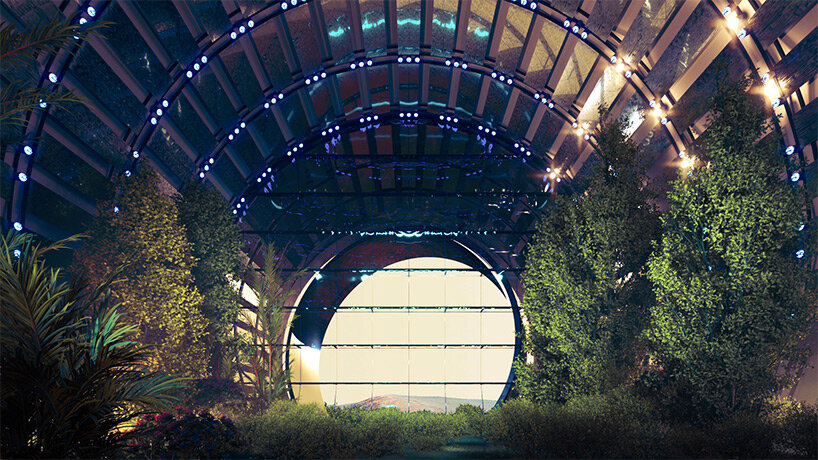 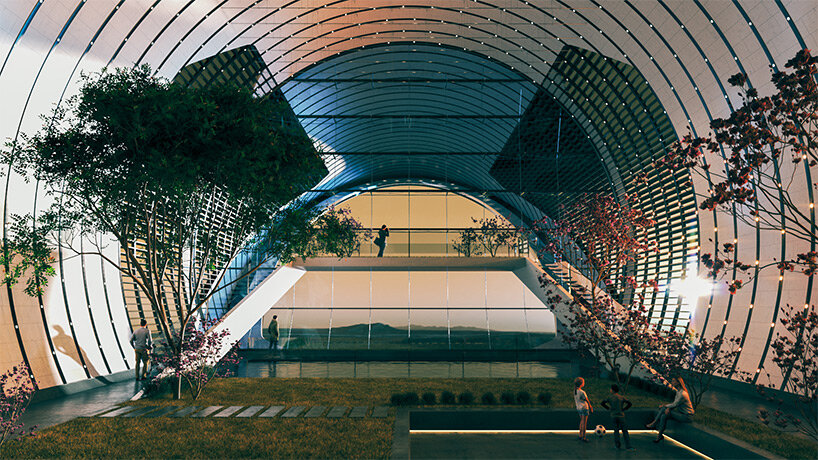 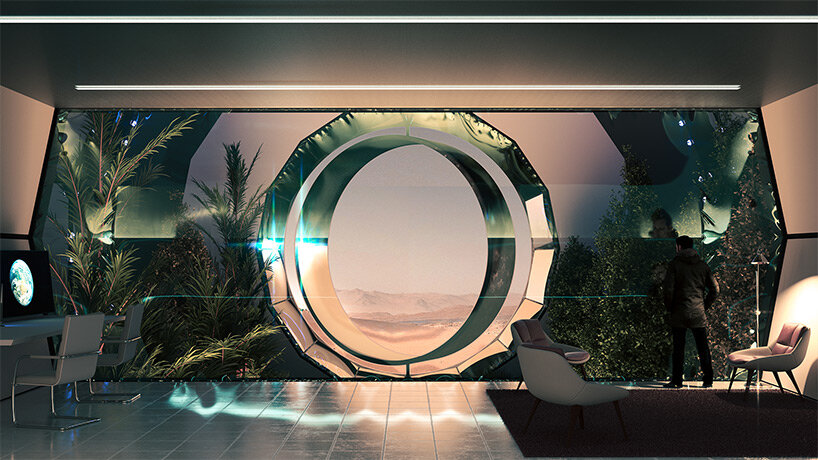 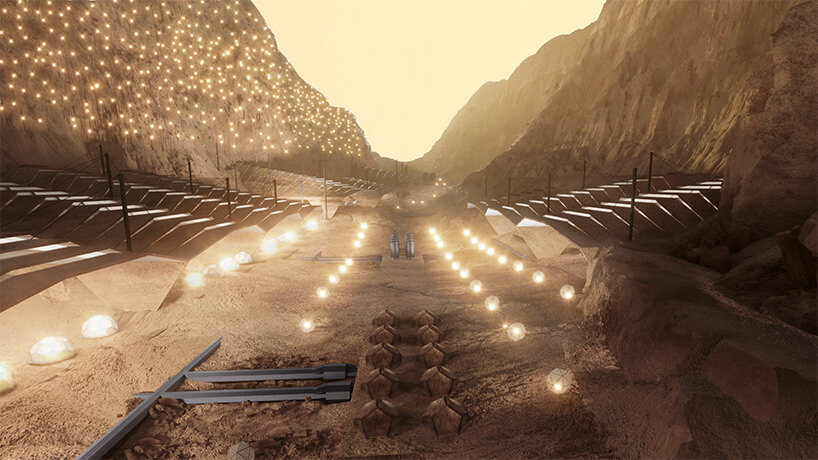 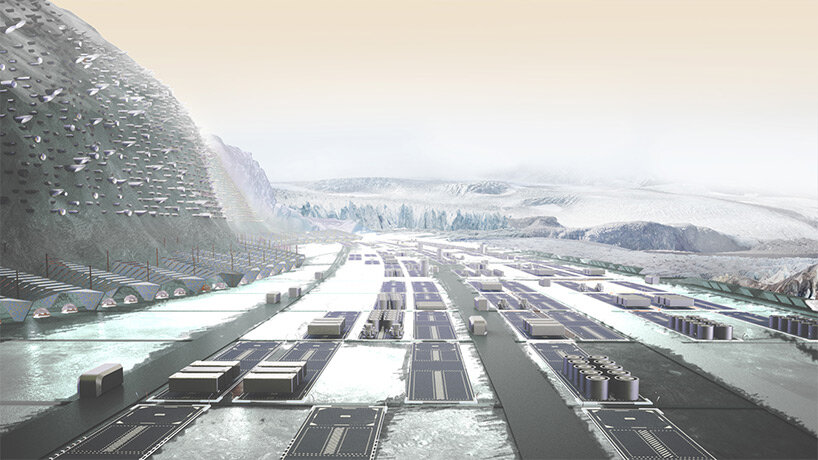 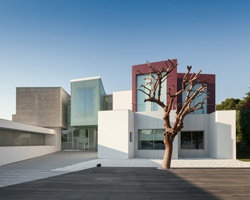 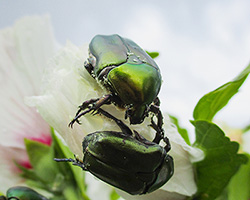 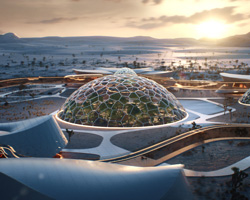 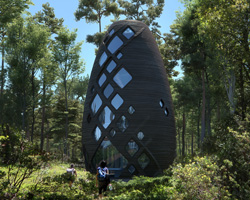