Located on the banks of the Amazon River, Amauri Gaspar visualizes a fish-trap shaped pavilion which preserves and revives the memory of indigenous culture. Celebrating the community’s rich heritage and way of life, the large curving structure houses within it facilities to preserve the region’s rich marine and bio diversity, united with distinctive tourism experiences.

Boasting simple vernacular architecture — emblematic of a synthesis of man’s relationship with nature in the Amazon — the pavilion is clad with weaving, latticed wicker that emulates the traditional handicraft technique of basketware in a delicate constructional expression. Gaspar tops the complex with a PET roof integrated with photovoltaic cells for renewable energy. The complex also floats on stilts to adapt to the stark changes in the Amazon River’s water levels throughout the year. 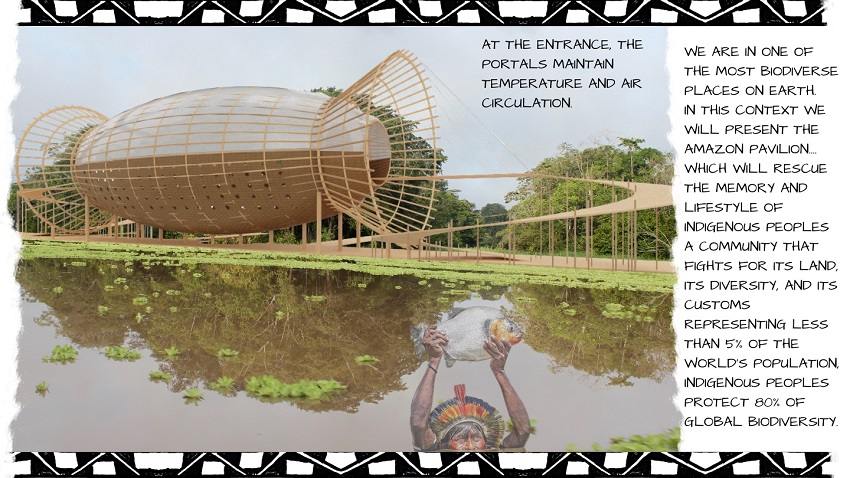 Fluidly adaptable, the Amazon Pavilion floats to adjust to the fluctuating water levels and stark shift in seasons. ‘You don’t fight with the water, you live with it,’ notes designer Amauri Gaspar. The island experiences two very different seasons, causing opposing living situations for the residents. For the full season from March to August — an ideal time to visit the Igapos — water levels rise to 15 meters. During the dry season from September to February, river levels reach their lowest point, which reduces space for fish and makes fishing and alligator spotting much easier.

In response, the pavilion’s foundations are ceramic tables filled with reeds, deemed unsinkable to deal with the rising sea levels. The designer attaches rings around the pillars and stakes to stabilize the complex and ensure it stays in its place despite the floating motions of the building. 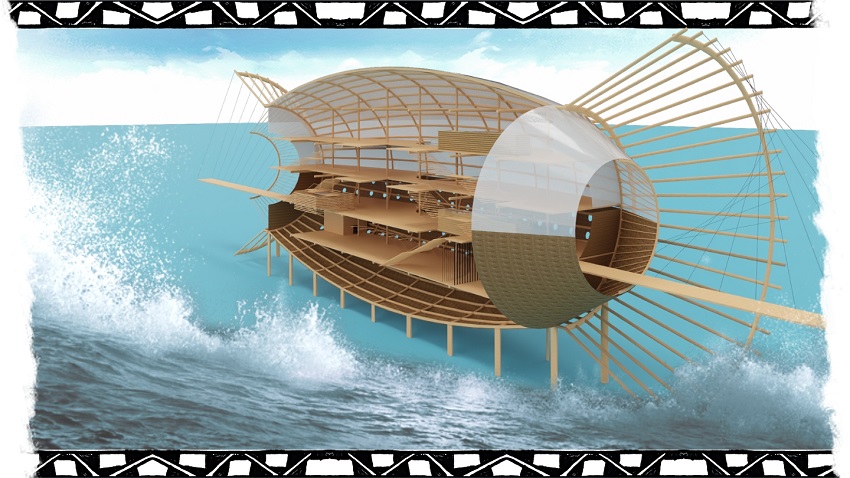 laden with the memory of indigenous heritage

The project memorializes the memory and lifestyle of indigenous people — a community that fought for its land, its diversity, and its historic customs — with a heritage and sustainable development scheme. Representing only less than 5% of the world’s population, indigenous communities protect 80% of global biodiversity. As such, the pavilion is dedicated to preserving the natural elements of the region, incorporating farming and marine areas, algae cultivation and bio energy spaces.

Further, the complex generates an equal hierarchy for its program, drawing on indigenous society’s lack of social classes, where instead everyone is treated equally. This is reflected in architecture, circulation, and internal divisions. The pavilion comprises four levels. At the lowest level are restaurants and private spaces for administration. Above, are exhibition floors where daily activities are developed. At the entrance, the portals maintain temperature and air circulation. Around it, a large pier deck leads to fish farming and marine areas, algae cultivation and bio energy spaces, and tourism facilities. 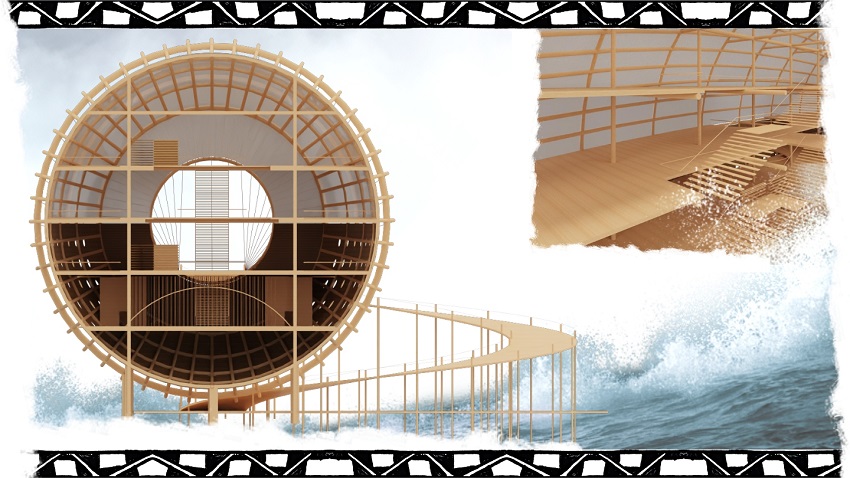 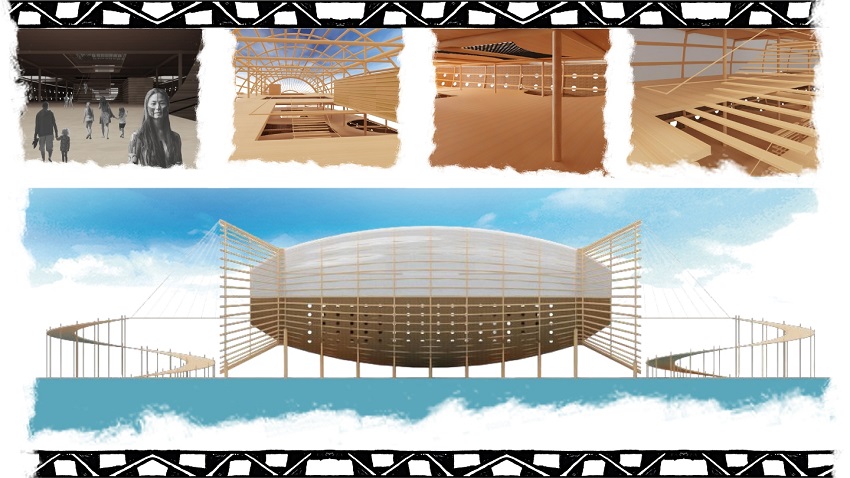 the project preserves and revives the memory of indigenous culture 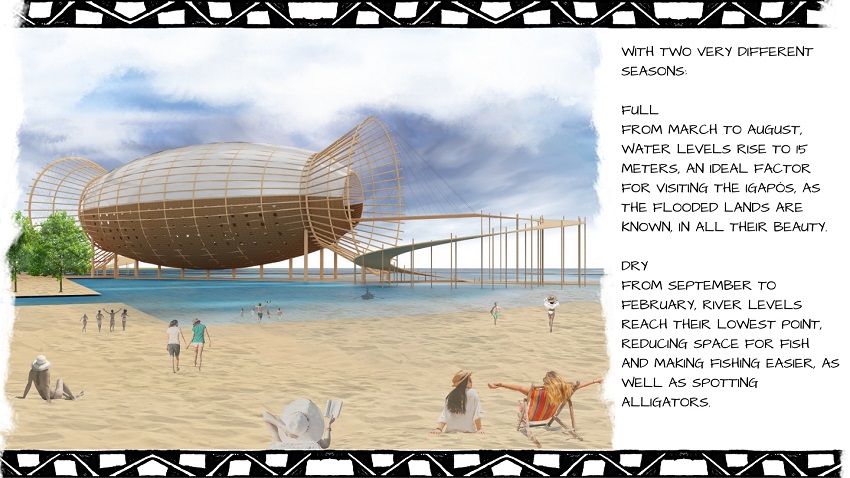 located on the banks of the Amazon River 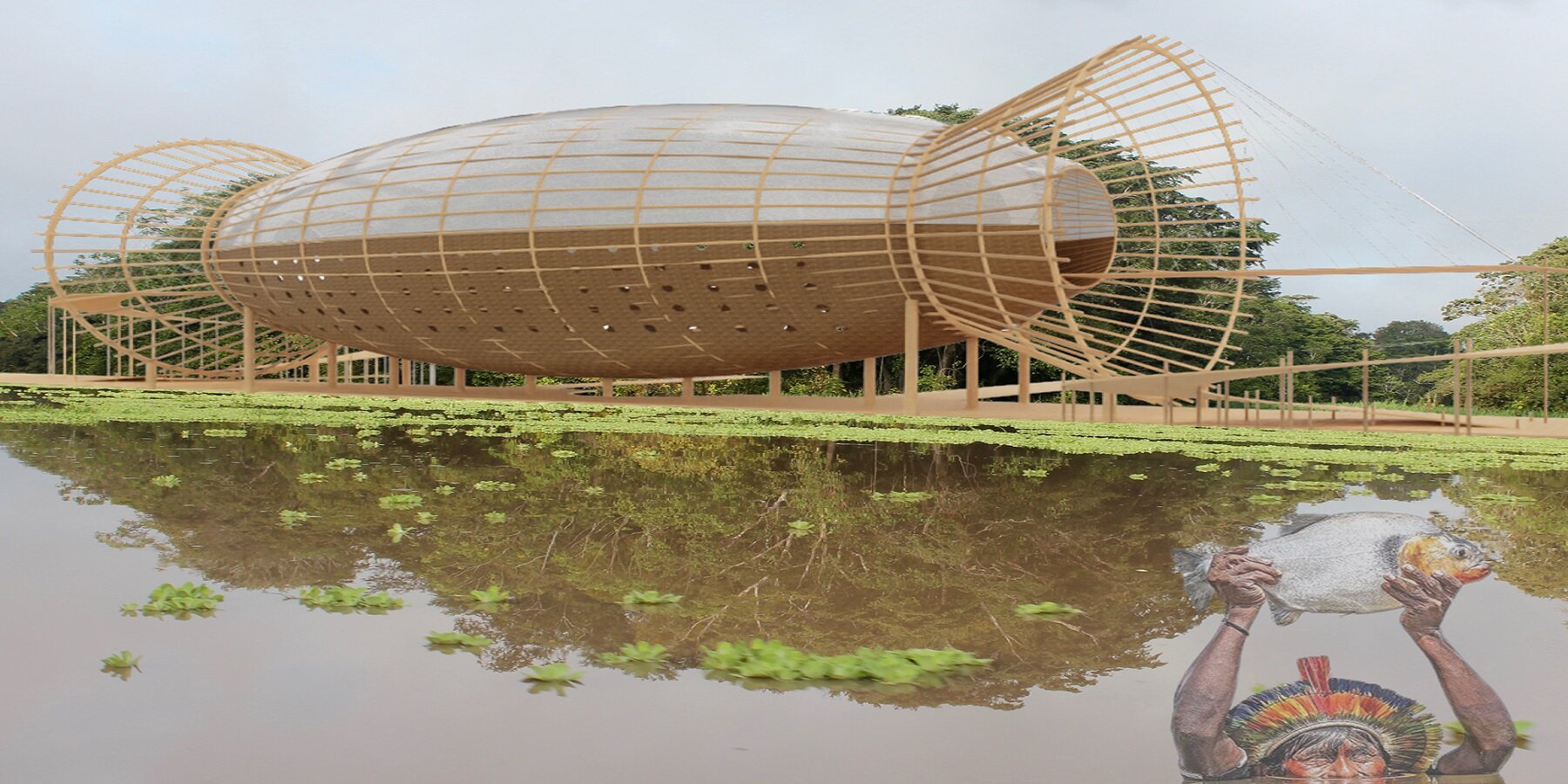 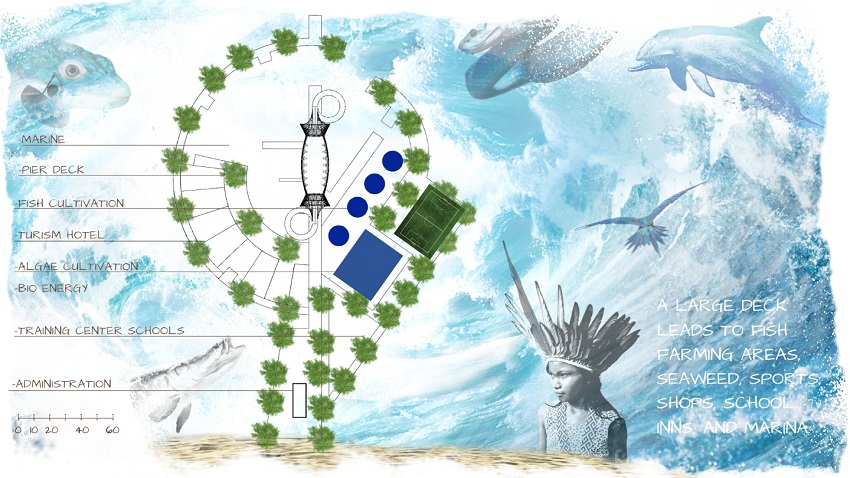 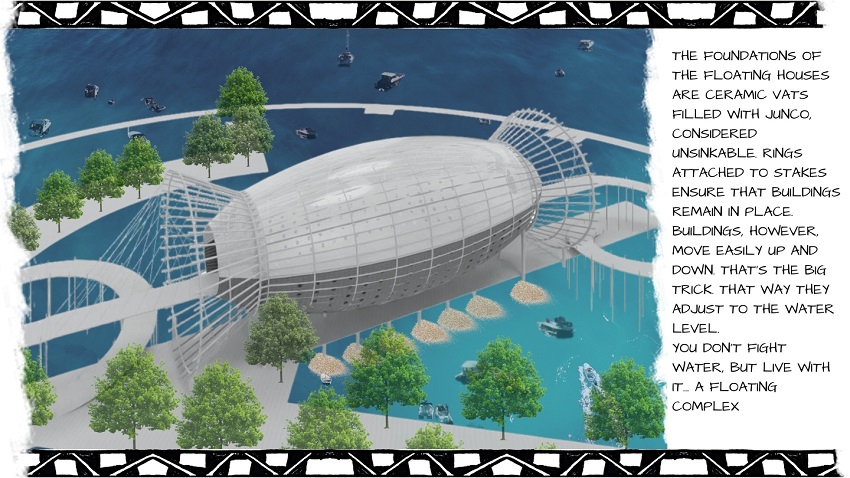 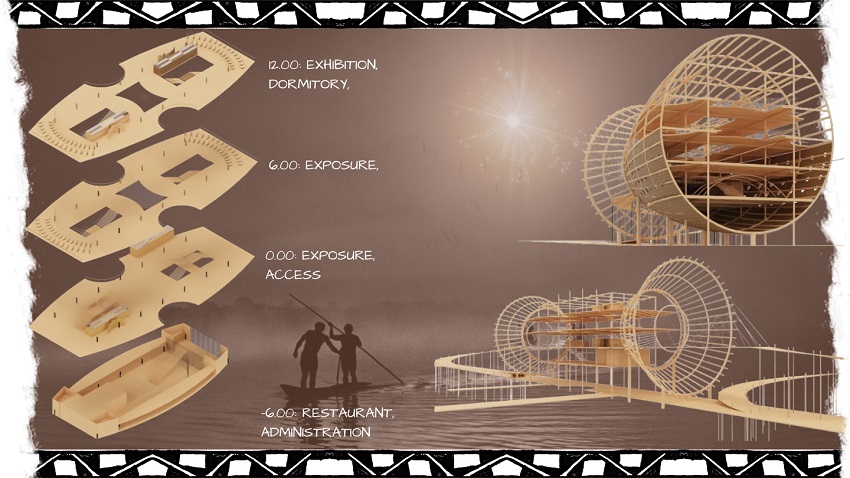 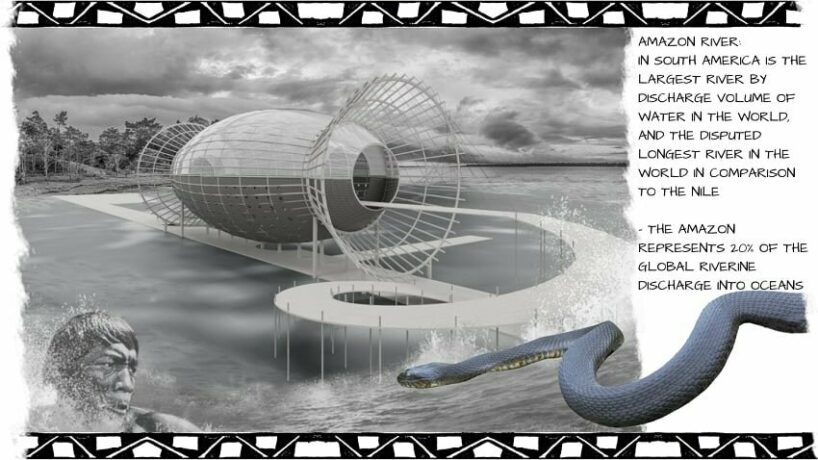 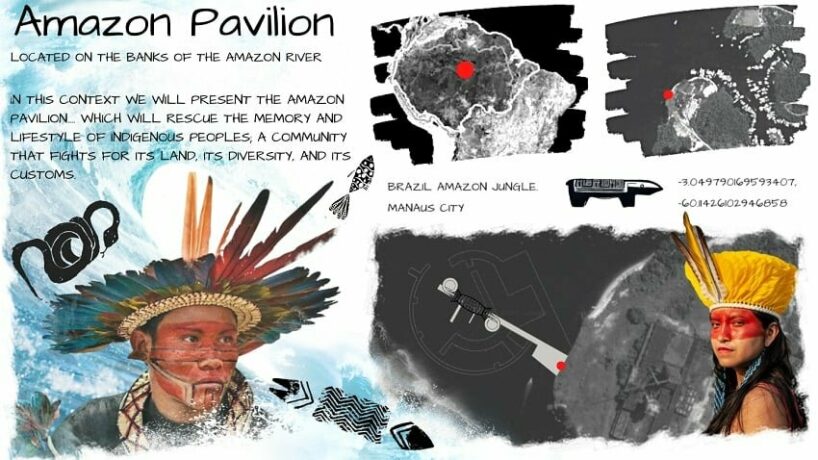 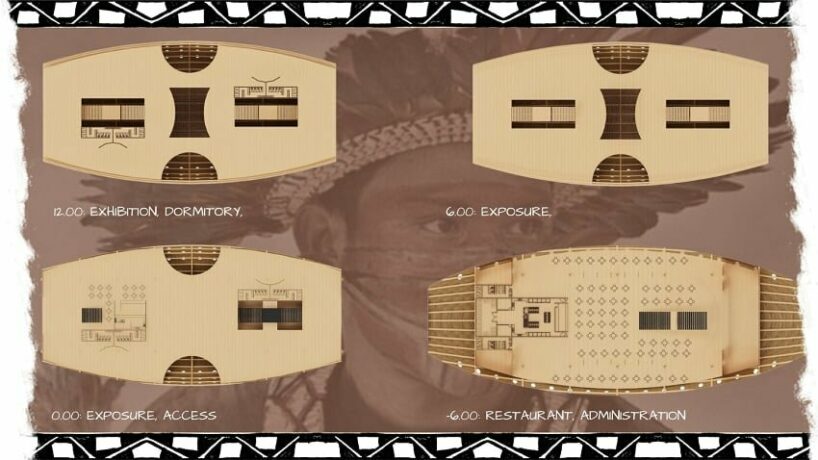