currently under construction, the 9,000 m2 renovation, designed by focketyn del rio, will create a new public nexus in the heart of basel, switzerland. this future landmark unites and unlocks two previously disconnected and enclosed spaces on the rhine river. kaserne cultural center will provide the town with a contemporary and multifunctional cultural facility that generates new public areas and gathering places in a historic location.

focketyn del rio’s new project turns a previously defunct building into an urban hub which links the kaserne area with the rhein, generating a plethora of public spaces. in a nod to the existing building and the site’s history, the designers perceptively refresh its exterior, keeping the essence and substance intact.

‘when we found the building, it was too shy to open itself up to the river. with our intervention, we only realize the potential that has always been there – the building invited us to do exactly what we are doing. it is not our aim to be noticed: we are convinced that once the transformation is complete, you will forget how it was before’ the architects explained. 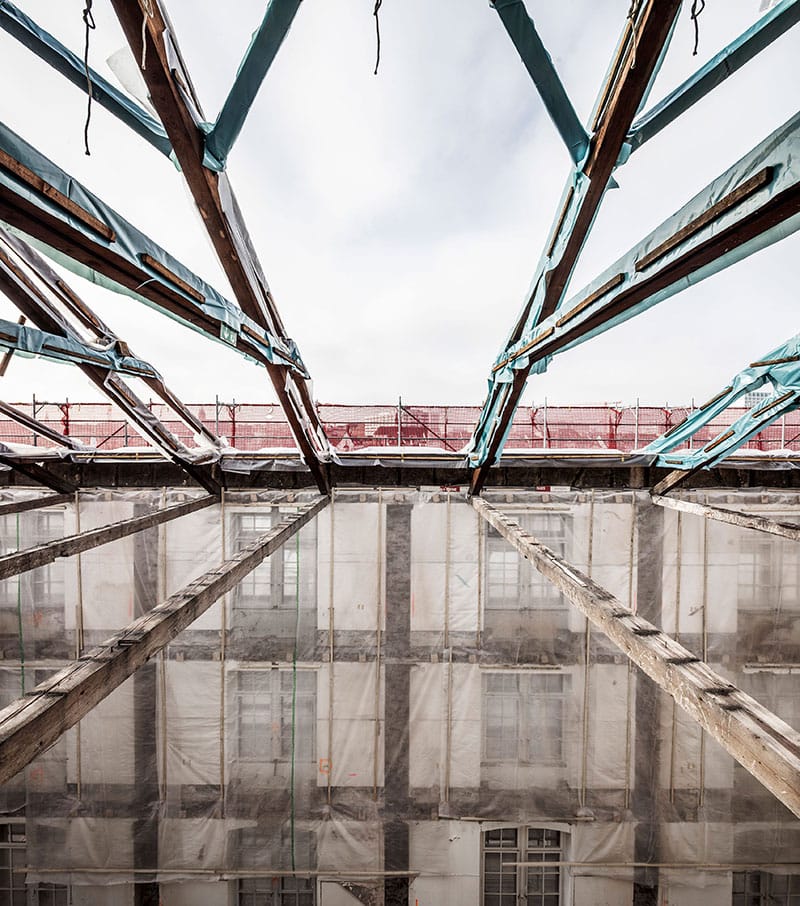 the center of the building will become a large, indoor public space, aptly named the plaza. the site’s nucleus, this three-story high open space, will become both its central circulation core and the public gateway from the rhine to the building and into the park. addressing the need to integrate several new pathways with the two sides of the building, the architects introduce two additional passages on the periphery of the structure and will enlarge all ground floor windows to become doors, making the building open, porous and accessible.

following its signature sensitive and sustainable approach to design, focketyn del rio astutely introduces radical transformations on the inside of kaserne cultural center. the ‘poly-typology’ characteristic of the rooms allow for pragmatic and flexible uses, adaptable and ready for the future. rooms can become corridors, and corridors can become rooms, giving the interior a tetris-like scalability via a unique plug-and-play configurability. circulation becomes ubiquitous, generating constant flow that is organized by the introduction of two vertical stairways in favor of long corridors. 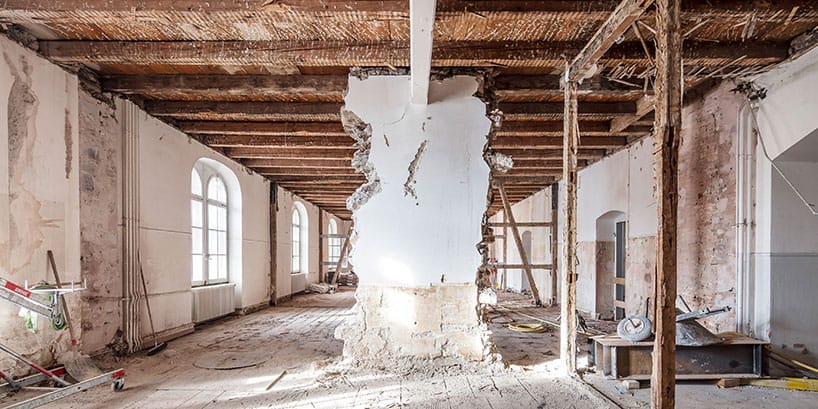 located in the plaza, the central staircase is generated by rotating the building’s core. stacked on top of the plaza are a large hall, a multi-functional events and performance space, and several other areas spread throughout the building to allow public access to its entirety. even though it is a single structure, the interior of the kaserne cultural center is defined by its wide versatility.in its center is the public plaza, and directly above, an events and performance space, art and rehearsal studios, a matrix of multi-functional rooms, restaurants, dining areas, and local spaces of worship, all connected by the central plaza and three vertical stairways. 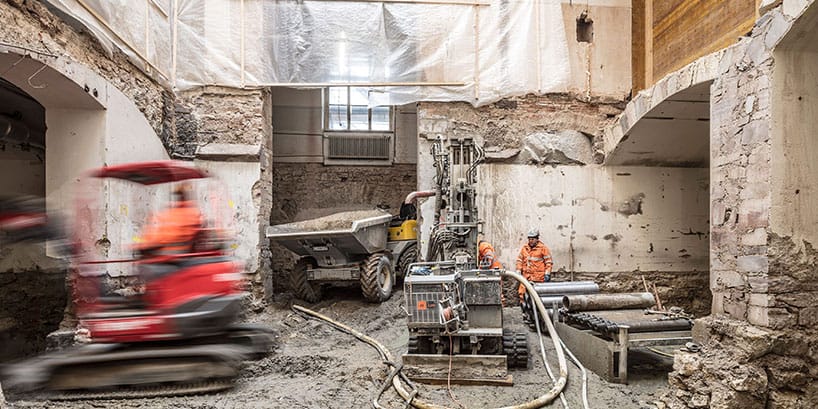 a building that used to be a barrier will soon become open, accessible, and filled with life. the transformation is the city’s very first publicly funded investment of a large-scale cultural facility in the kleinbasel district. as one of the up-and-coming areas of basel, the building is set to profoundly and positively change this region. the completion of the kaserne cultural center is eagerly awaited in 2021. 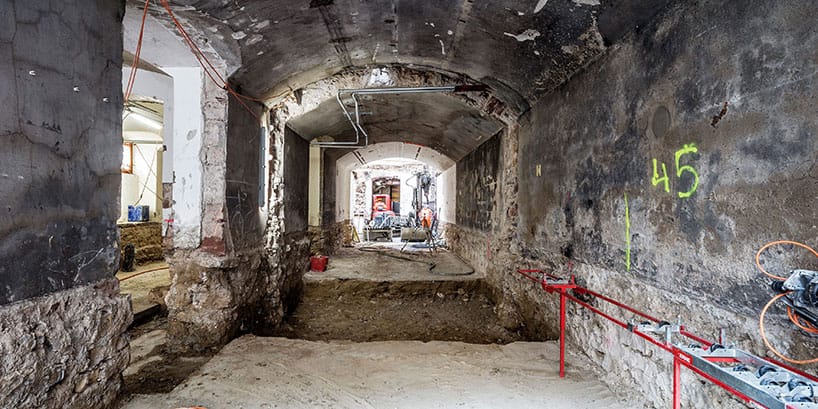 ‘we found a building that was mute and didn’t speak to its surroundings and communities. very soon, it will speak multiple languages in multiple places. the animation in the building floods out into the public space: previously restrained and trapped inside a silent box, new activities will circulate from the inside to the outside.’ 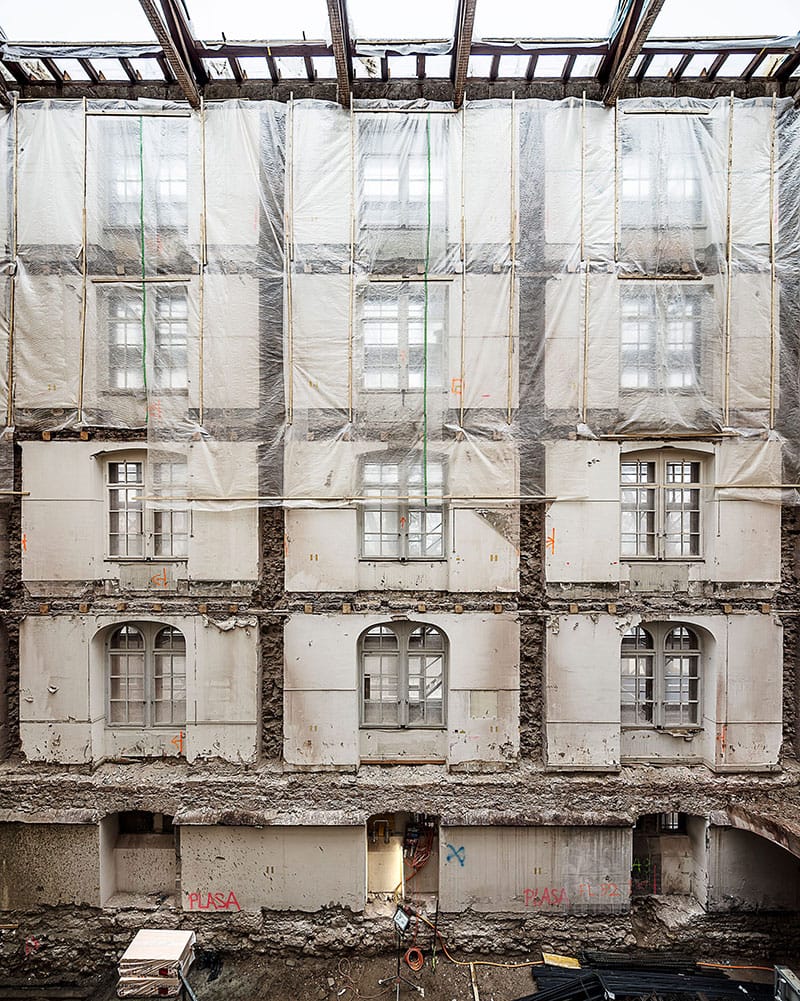 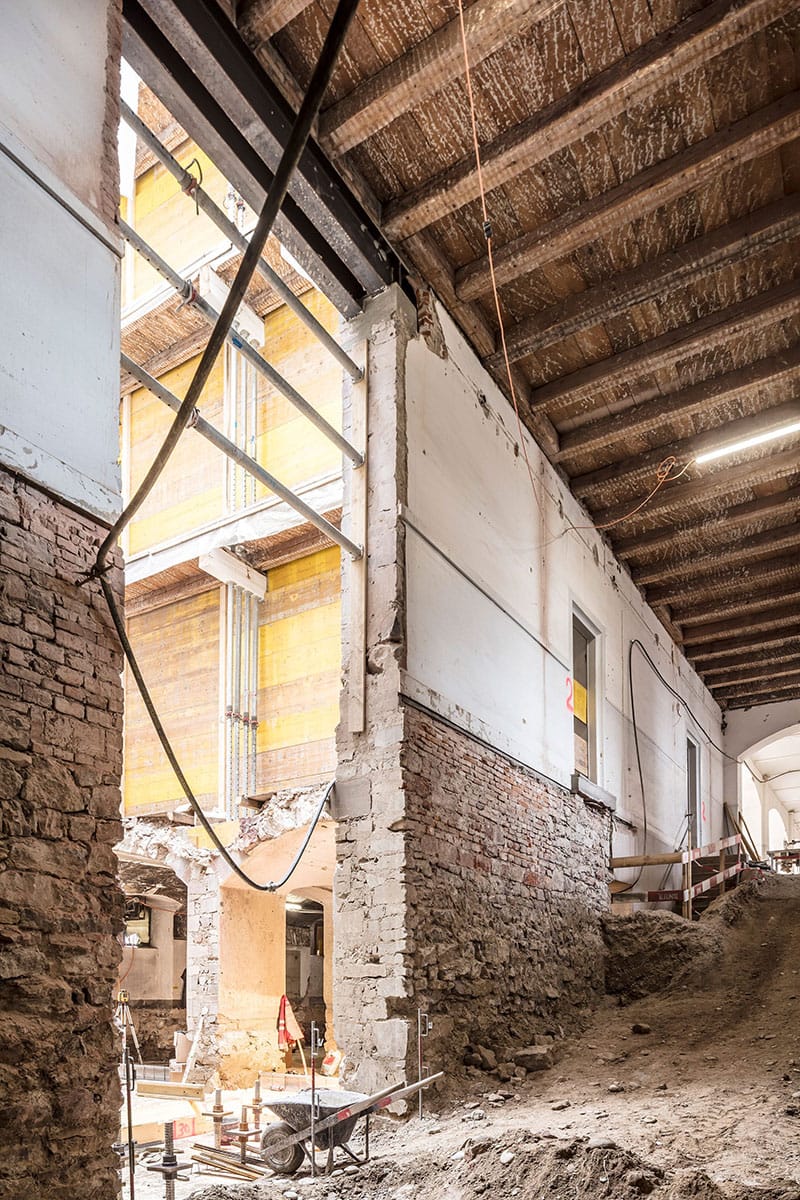 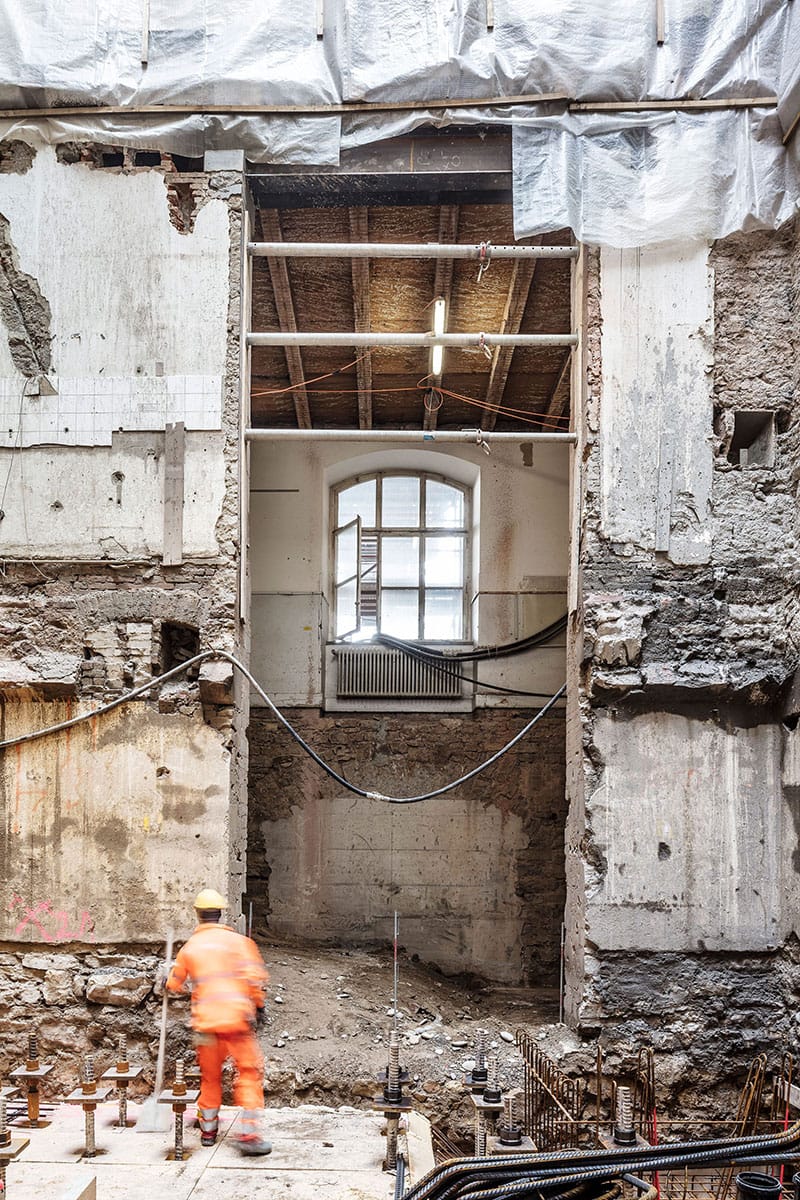 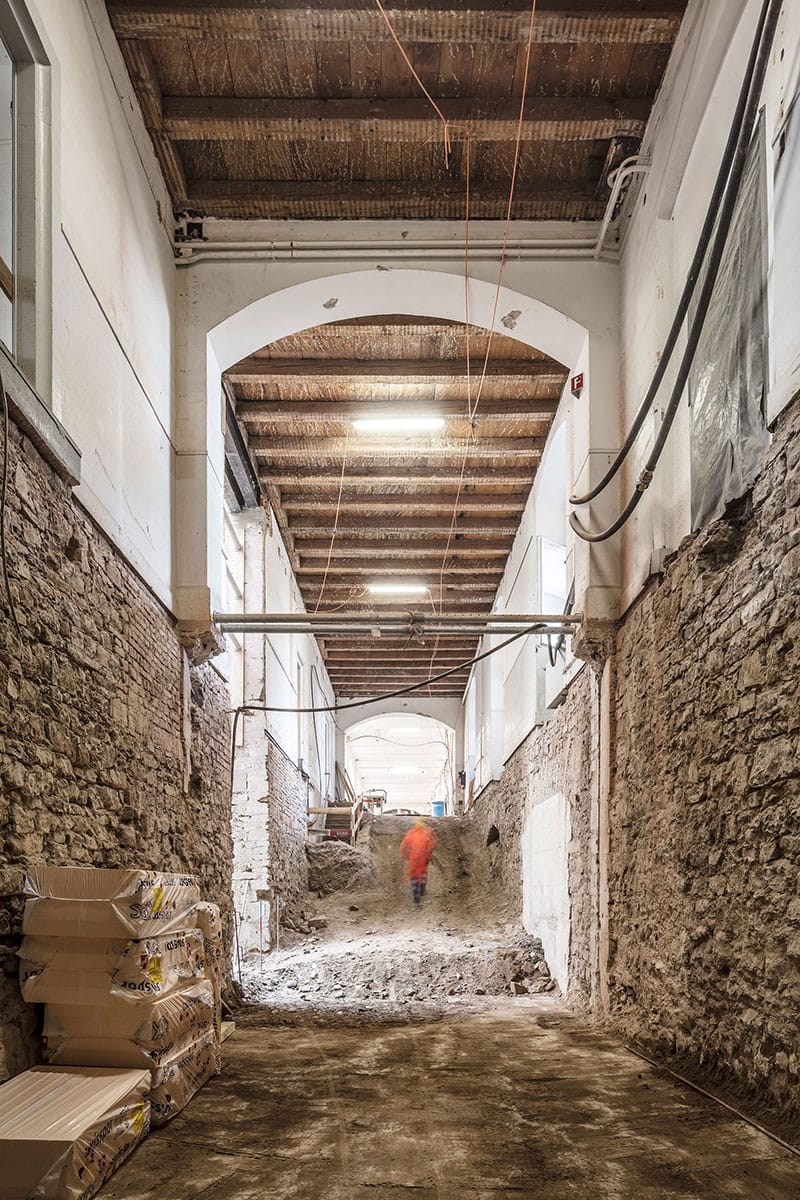 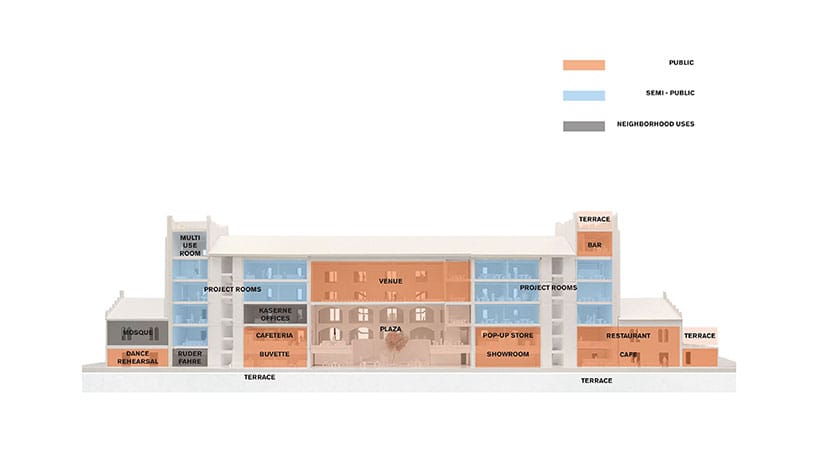 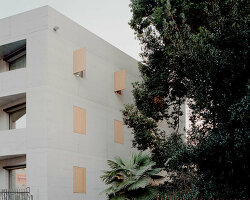 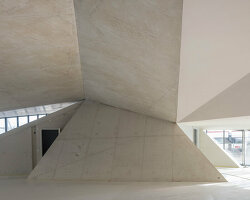