parametric design is a way of generating ideas using mathematical algorithms based on a set of rules and parameters. this can reduce the amount of work for repetitive, mundane tasks that must be performed on a large scale or in massive quantities. for this reason, the process has been applied to art installations, pedestrian bridges, and skyscrapers. following suit, format elf architekten has used the method to generate a pavilion for ‘campus netzwerk’, an interdisciplinary office space for formstelle, kantine and netzwerk in toging, germany. the collective hopes to provide evidence of a successful structure transformation from heavy industry towards the use by architects, engineers, and designers. 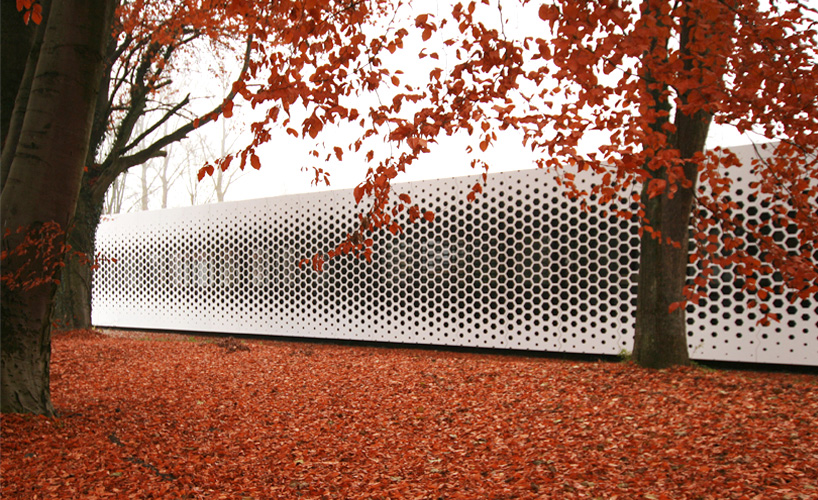 the single-story structure floats beneath huge ancient trees that reside within the wasteland of the former VAW aluminum plants. the use of parametricism gives the building its contemporary appearance within this setting, as it is decorated with a gradient of hexagons that reference the honeycomb motif seen throughout the natural world. for this characteristic, the programming of a corresponding script was necessary: the implementation of the initial concept through construction to laser cut façade panels was only feasible through one universal digital technique and gives a visual statement to the altered approach with aluminum. 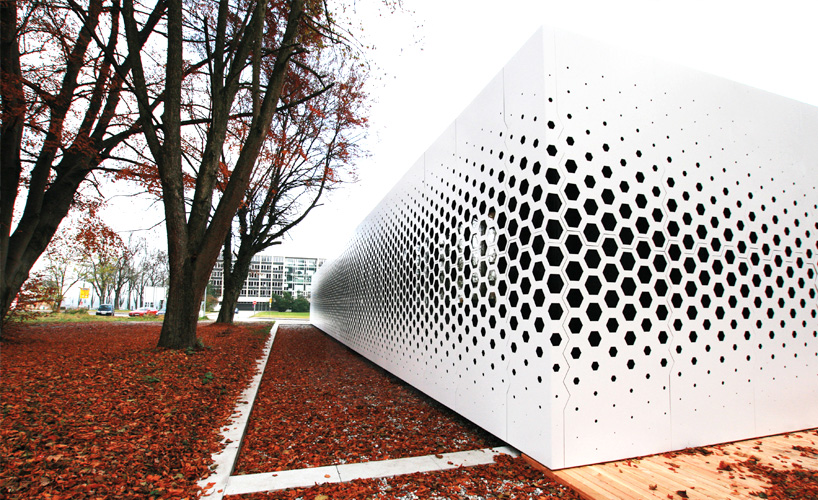 west exterior view with the pattern wrapping around the corner

a particular challenge was the tension between the metaphorical design idea on the one hand, and the legal requirements on the other. therefore, the varying sizes of the holes have been adjusted specifically to the site, corresponding to the shading provided by the surrounding vegetation. the result is a practical distribution of light that meets of the needs of the workplace functions. 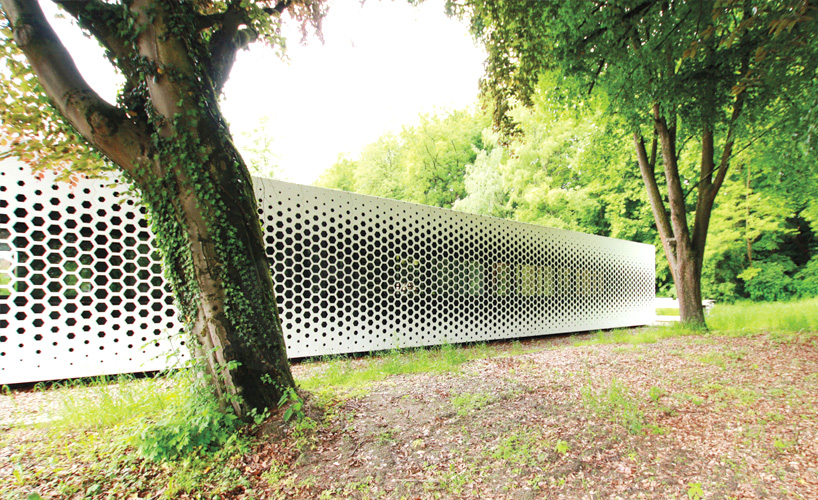 the perforations correspond to the shading provided by the trees

another special feature is to be found on the flush, glazed south elevation of the building, whose 400kg panels can be extended automatically in alignment. this produces a high ventilation cross section as well as a flush appearance of the facade in its open state. since commercially available systems are overwhelmed by the size and weight of the glass sheets, a custom-made solution was developed for the project that withstands the forces involved. 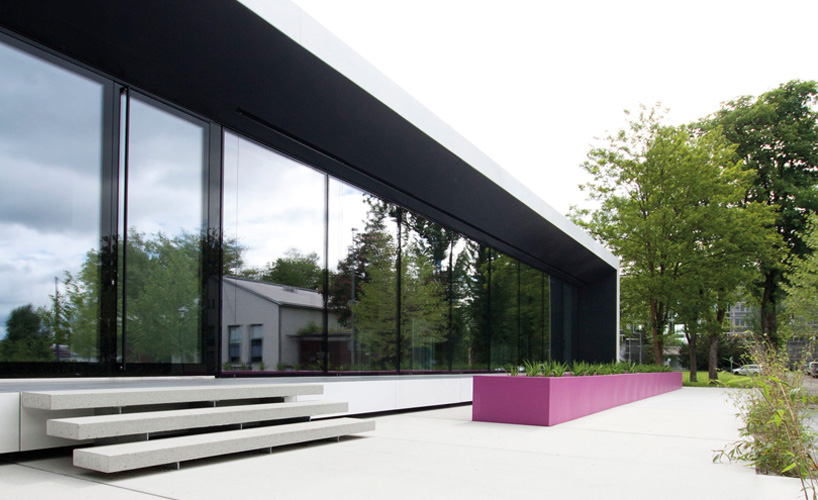 according to the integrative approach, the interior has been planned in a way that follows the basic ideas of the exterior. design principles are the white surface and the black accents of the cut planes, analogous to the construct’s outer aesthetic. for example, the specially manufactured desks, with their stark white envelope and the black diagonal cuts, take after the layout of the south façade. this contrasting color palette establishes notions of ‘corporate architecture’ with the graphical appearance of format elf architekten. black cubes operate as a central spatial element while a white ground structure ensures light-filled spaces even in the depth of the complex. appropriate to the working manner, a combination of vacancies and cellular offices enable creative work in all its facets. 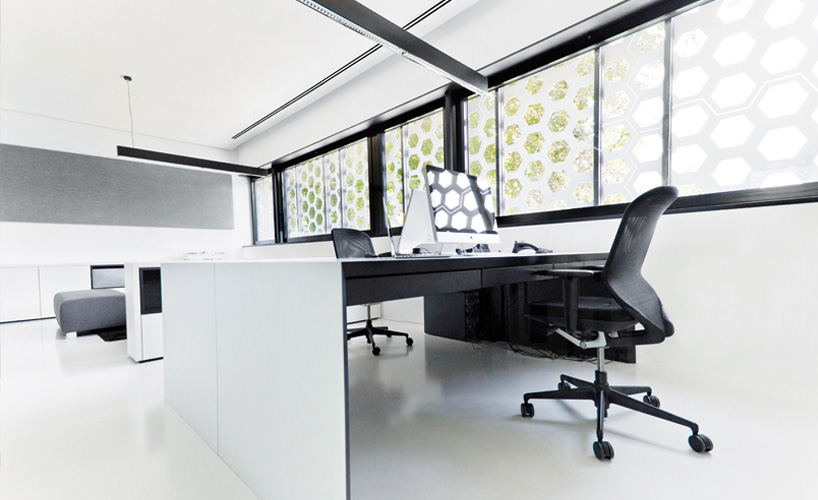 the windows are hidden by the honeycomb perforations 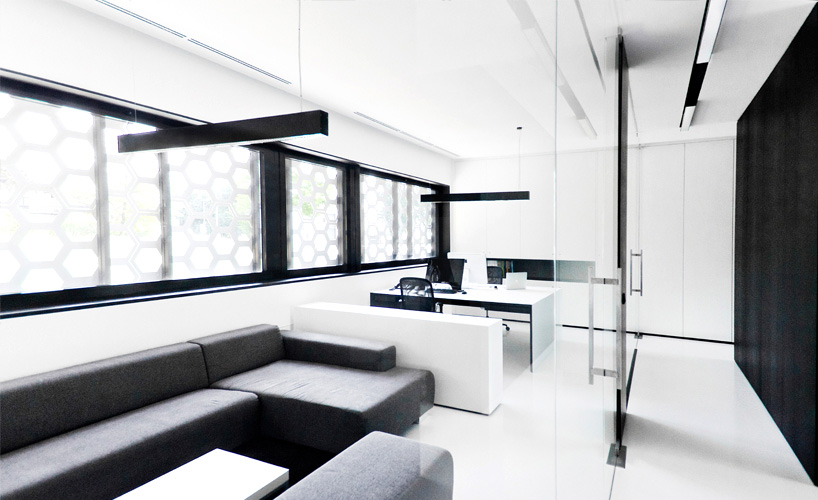 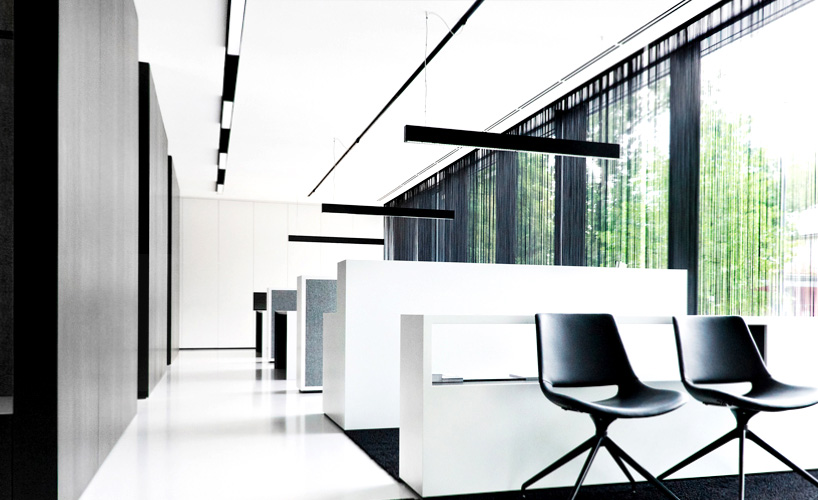 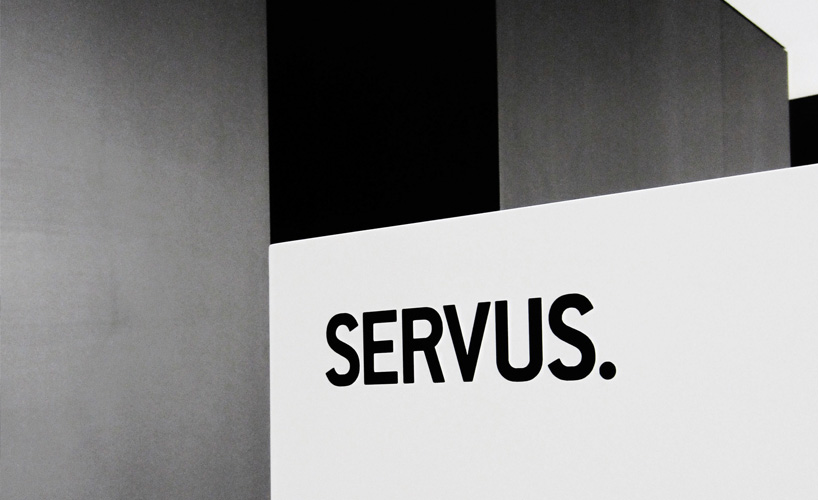