according to forward thinking architecture, ‘as architects and technicians, we shouldn’t talk about design, processes, or sustainability as isolated matters. what is interesting about a new design or building is the potential and possibilities it creates in order to improve human life.’ with other proposals based around a similar agenda, the barcelona-based studio has revealed their scheme called ‘OAXIS’.

being a region sitting in the sun belt, the arabian desert presents a vast rainless atmosphere boasting with energy resources, and thus, making it a strategic position for the project. as a geographic area, the peninsula within which it resides is often considered impassable, due to the extremely dry environment, scarcity of visible vegetation, and seasonal winds. despite the inhospitable terrain, it has served throughout history as a commercial passageway between the middle east and north africa, and has proven to be a valuable supplier for natural resources, including oil, natural gas, phosphates, and sulfur. furthermore, it also covers a reserve of underground groundwater, trapped beneath the sands since the pleistocene age, which has in recent years been tapped and used for irrigation in the region. 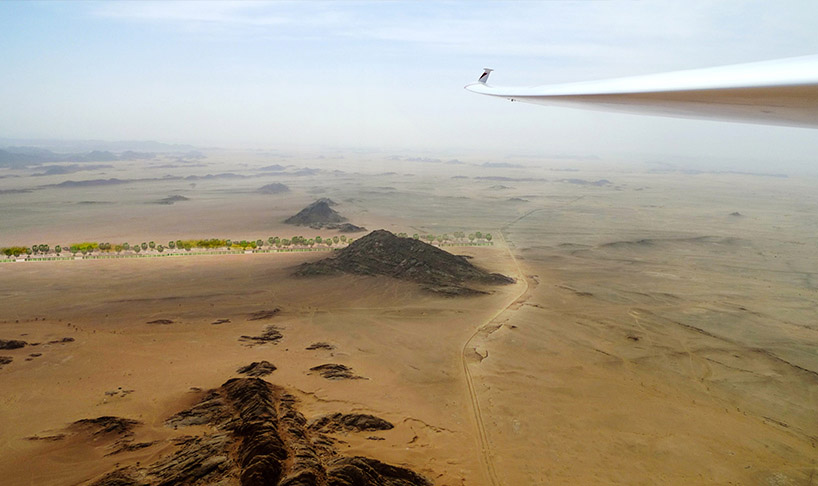 as the project addresses food production and consumption, it deals with the self-sufficiency and connectivity of cities around the world, with the relationships between architecture and food insecurity placed within an ecosystemic vision. people, nature, design and technology are combined in order to serve a specific function: to produce fresh and quality local crops with water saving technologies. in turn, this may help reduce massive food imports in the arabian peninsula cities while creating an attractive linear environmental hub for farming technology research, pedagogical use, and civic amenities. 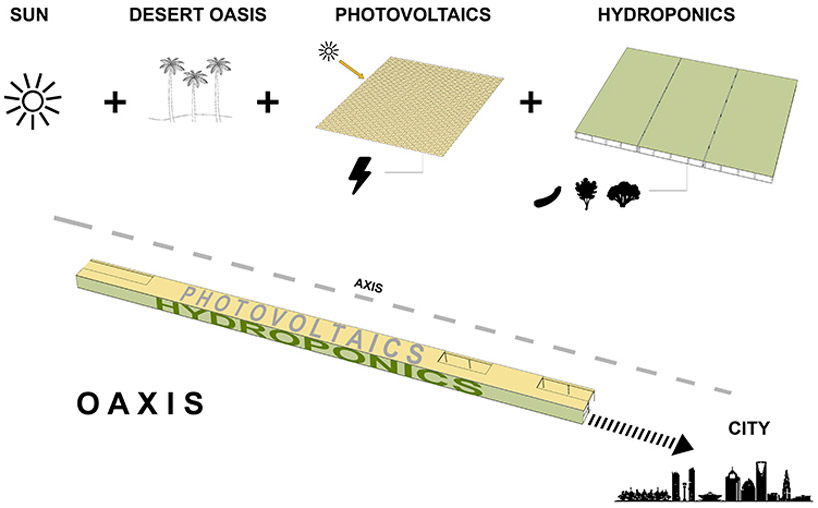 a new link between the desert, solar power, and hydroponics 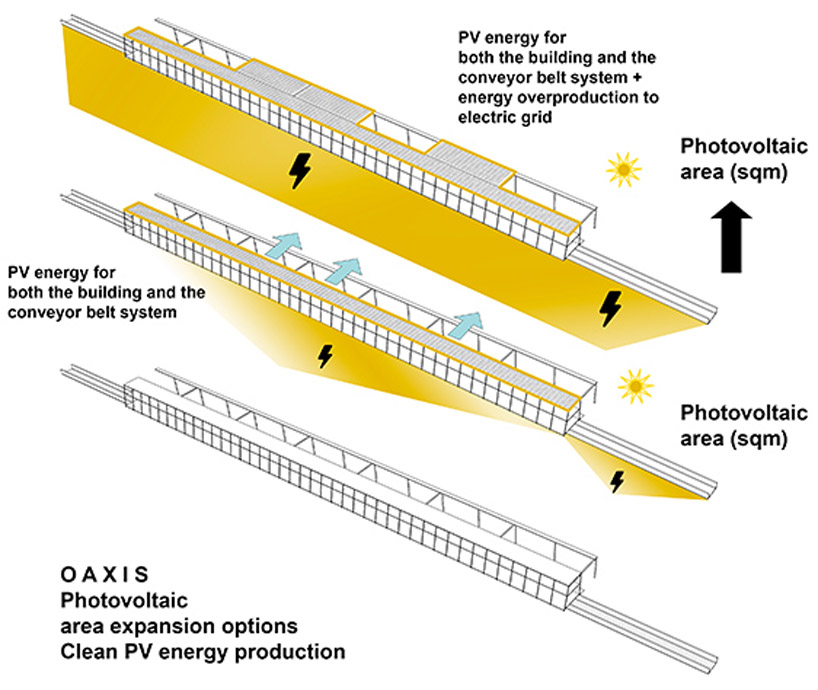 power scheme of the structure

as a result of analyzing the site, the architects were influenced by the desert oasis morphology and use it as a reference for the project’s transformation over time. ‘but our objective is not to compete with nature and its amazing processes or with an existing oasis such as al-hasa. what we propose is a safe and controlled hydroponic facility based on a modular linear pattern, a city new ‘green axis’, they said. ‘it will produce solar energy to become self-sufficient and capable of running an underground transportation system that deliver the crops directly to the cities, shortening long distance food transportation (imports) and therefore reducing CO2 emissions.’ 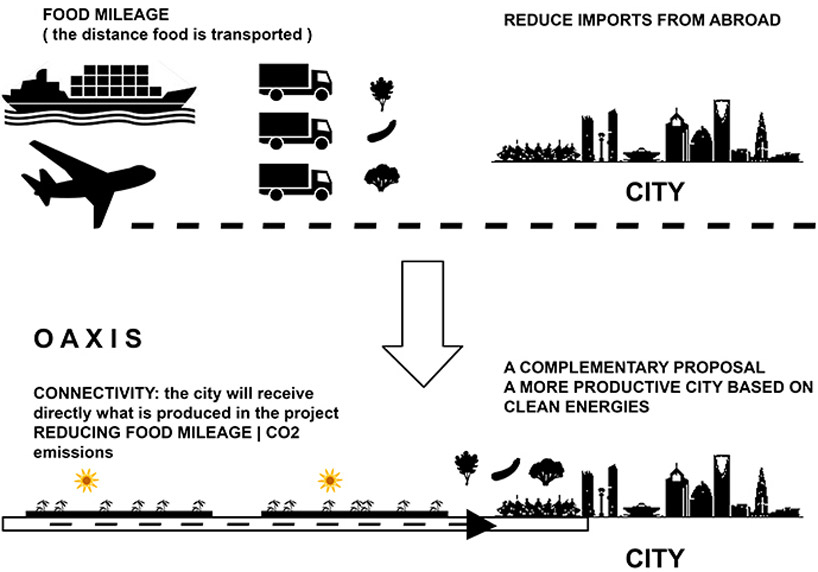 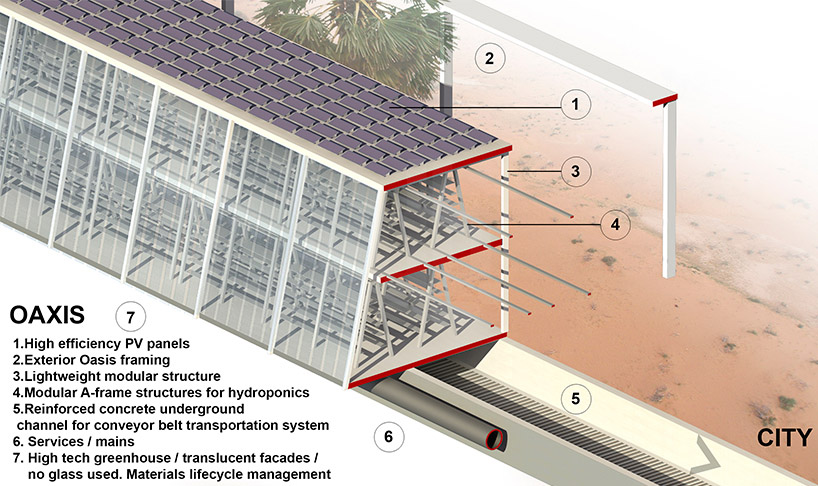 the concept incorporates a prefabricated modular structure of recycled steel, which can be easily expandable to increase the footprint area if required. the use local passive strategies to control the building’s environment is accompanied by the ability to produce its own power via a series of high-efficiency photovoltaic panels mounted on the roof-top, acting as a linear solar plant. the clean energy will be used for the architecture’s own consumption and for artificial LED lighting, but most notably, for running the underground conveyor belt system which will transport the hydroponic crop trays directly to the nearby city logistic station. all the overproduced peak time energy will go to the city electric grid. the envisioned farming methods will significantly reduce irrigation requirements (by up to 80%) by controlling and recycling the water used, with less fertilizers, pesticides, and a rapid growth year-round cycle. in order to have efficient crop production, part of the recycled water will be used for the plants that dress the exterior, creating a constantly changing appearance. OAXIS will install computerized devices on top of the physical construct to control the environmental conditions and the conveyor belt crop transportation mechanism. types of fresh vegetables, herbs, and fruits will include: potatoes, thyme, lettuce, basil, tomatoes, strawberries, rocket, bell peppers, and cherry tomatoes. 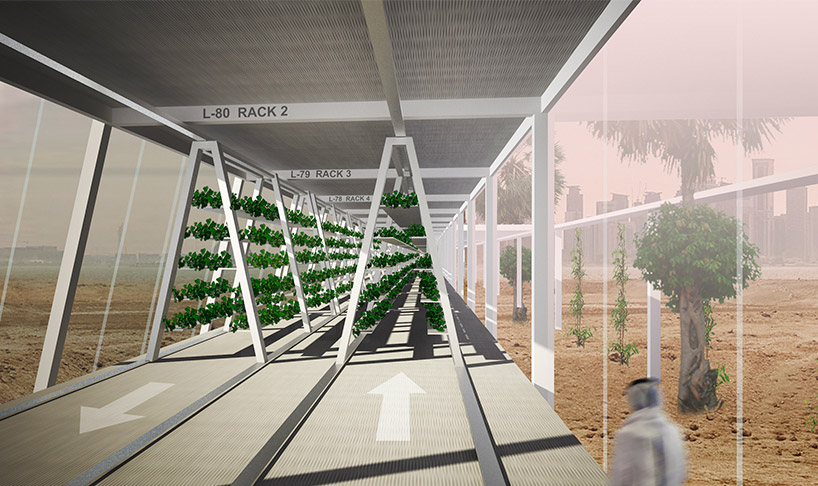 ‘the ideas behind solar energy plants or hydroponic agricultural systems are not new to the region , actually there are already several hydroponic farms and plenty of Solar plants around the area. what we believe is interesting about the OAXIS project is the effect it can produce by ‘fusing’ these existing technologies. having said this, the proposal is not about inventing a new hydroponic or photovoltaic system, it is about using strategic thinking in order to fuse these existing technologies with the desert elements in order to create a new self-sufficient prototype, one that can help reduce food insecurity, massive imports and create more possibilities for human life.’ 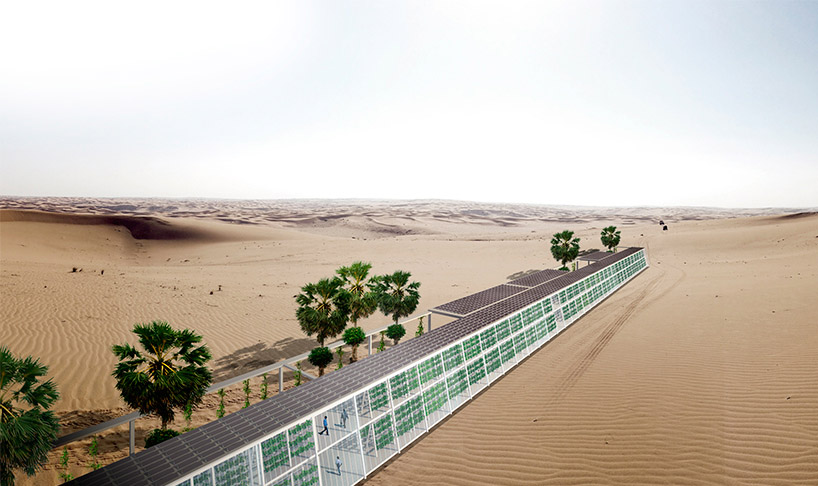 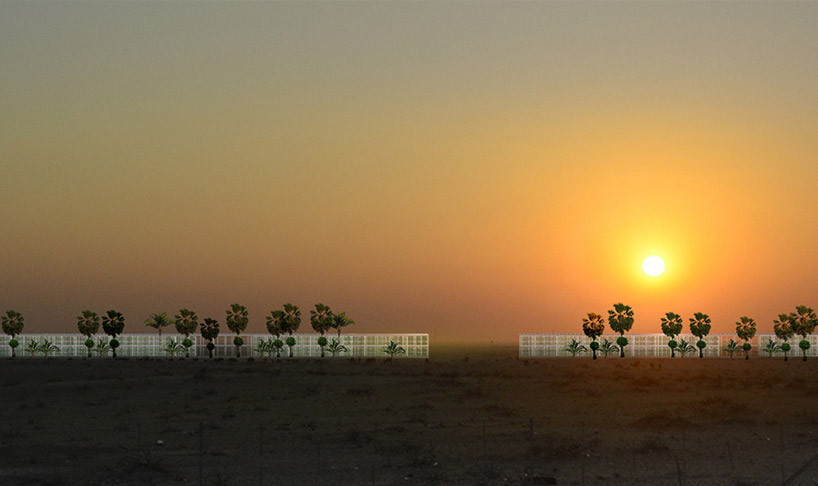 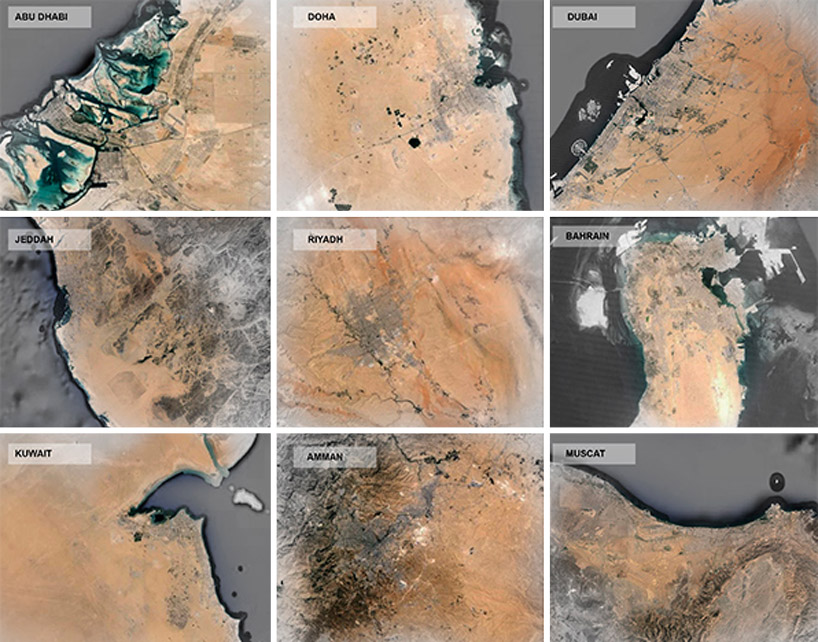 hypothetical project locations in the arabian peninsula and other arid regions 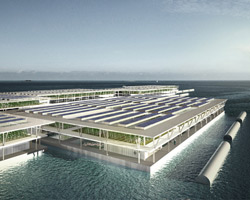 May 19, 2015
smart floating farms concept ponders agriculture in a world of 9.1 billion