hermitage plaza will create a new community to the east of la défense, in courbevoie, that extends down to the river seine with cafés, shops and a sunny public plaza at its heart. designed by foster + partners the project incorporates two 323-metre-high buildings – the tallest mixed-use towers in western europe, which will establish a distinctive symbol for this new urban destination on the paris skyline.

the result of a close collaboration with epad, the city of courbevoie, atelier de paysage urbain and département de hauts-de-seine, the project is intended to inject life into the area east of la défense by creating a sustainable, high-density community. due to start on site in 2010 and complete by the end of 2014, the two towers accommodate a hotel, spa, panoramic apartments, offices and serviced apartments, as well as shops at the base.

forming two interlocking triangles on plan, the buildings face one another at ground level. open and permeable to encourage people to walk through the site, the towers enclose a public piazza which establishes the social focus. as they rise, the towers transform, turning outward to address views across paris. the glazed façade panels catch the light, the sun animating different facets of the buildings as it changes direction throughout the day. the angle of the panels promotes self-shading and vents can be opened to draw fresh air inside, contributing to an environmental strategy that targets a breeam ‘excellent’ rating. the diagrid structure is highly efficient.

a crystal-shaped podium building contains office space, with two detached satellite buildings housing a gallery and auditorium that further extend the public realm. the piazza – created by burying the existing busy road beneath a landscaped deck – slopes gently downward to the water’s edge, which is lined with new cafés and restaurants. 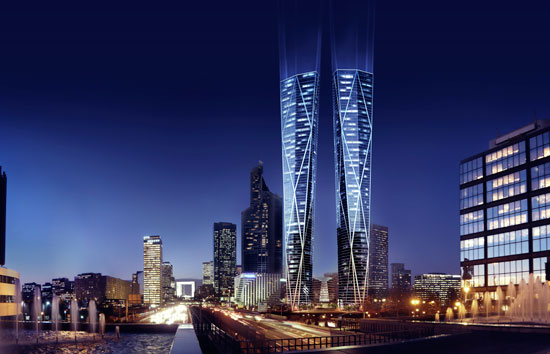 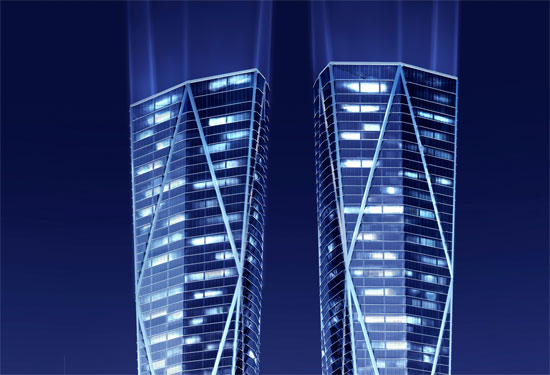 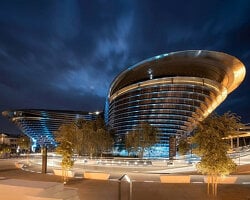