the thames estuary research and development company (testrad) has revealed that london based practice foster + partners and international infrastructure consultant halcrow will collaborate to generate a detailed transportation masterplan for the thames estuary, united kingdom. only a 40 minute commute from the heart of the city where the thames river meets the north sea, this node will provide new railway connections, sea ports, airport, tidal energy and flood protection. expected to accommodate 150 million passengers a year, the plan intends to increase security and reduce concentrated pollution in urban centers by centralizing all travel activity into one hub.

highlighting the united kingdom’s position as a competitor in commercial, tourist and financial sectors, this vision establishes a trajectory for the next 50 years until approximately 2060. the goal would be to permanently shift all transit activity to the thames estuary upon completion therefore reducing the need to add a third runway to london’s heavily traveled heathrow airport. 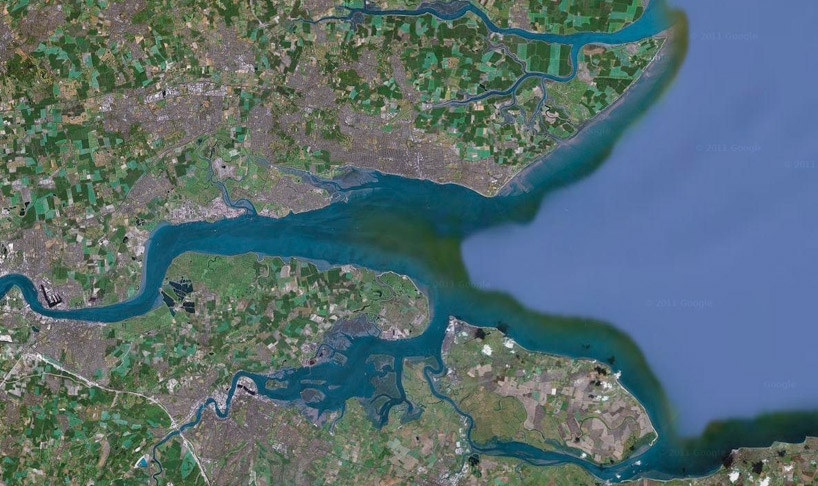 in reference to the plan, lord foster has stated: ‘these visionary proposals are far from future fantasy. they are both essential and down to earth. when you look at the eastwards thrust of london’s infrastructure, with the channel tunnel and the olympics, you can see how it would be possible to create a 24-hour airport. this move would greatly improve the quality of life for londoners by reducing pollution and improving security. it would also allow london to compete with rapidly expanding airports in europe and the middle east. the arguments are extraordinarily persuasive and the precedents are also compelling. more than 10 years ago hong kong built what was then the world’s largest airport at chek lap kok, an island reclaimed from the sea – in just four years.’

david kerr, board director of halcrow group has stated: ‘the thames hub would provide a major economic boost for kent and essex, with the creation of hundreds of thousands of jobs over a number of years and provide noise and air pollution relief for london’s population. the proposals would make a significant contribution to the UK’s commitment to reduce carbon emissions. if the UK is to remain globally competitive, these proposals need to be seriously considered.’